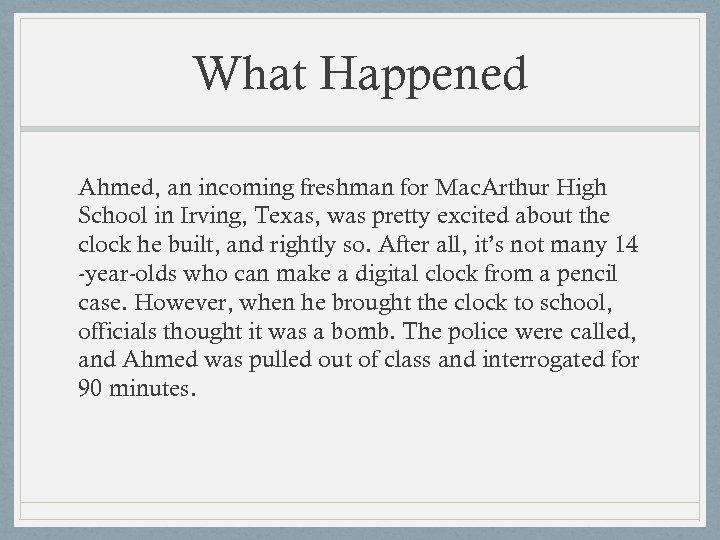 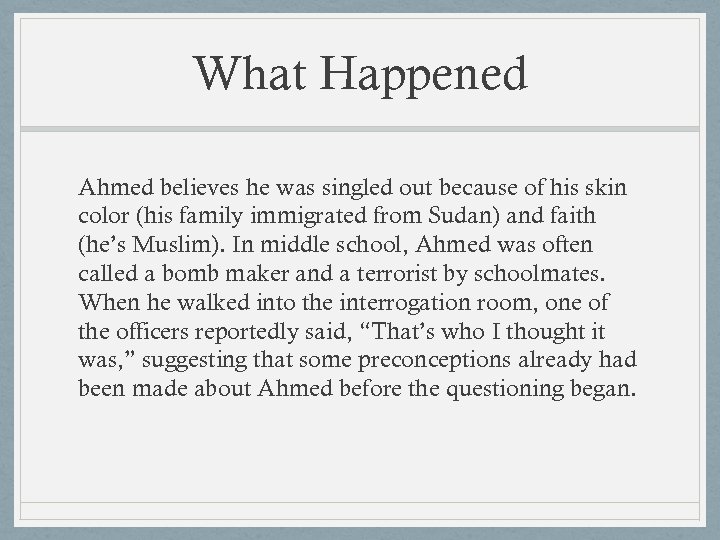 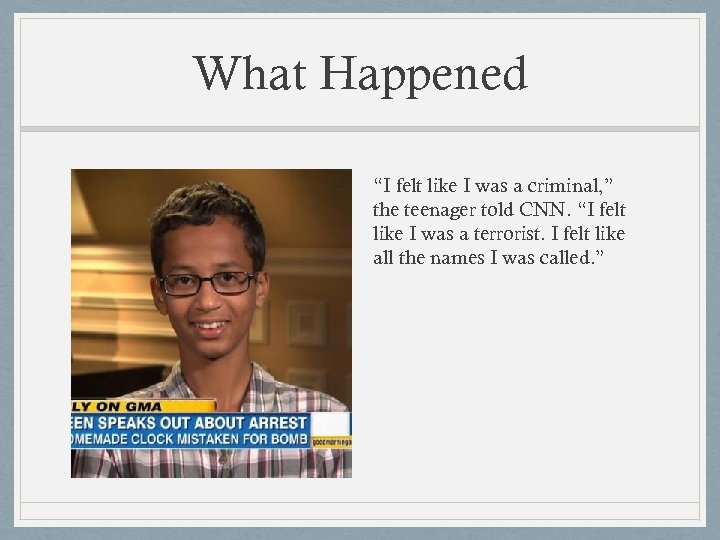 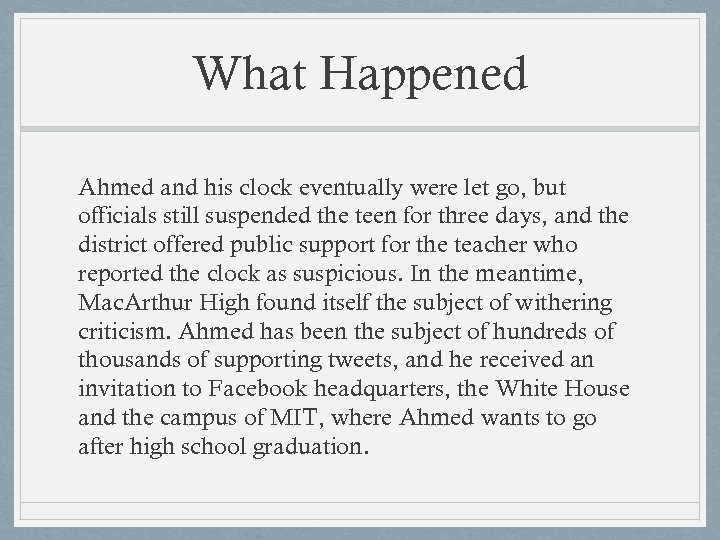 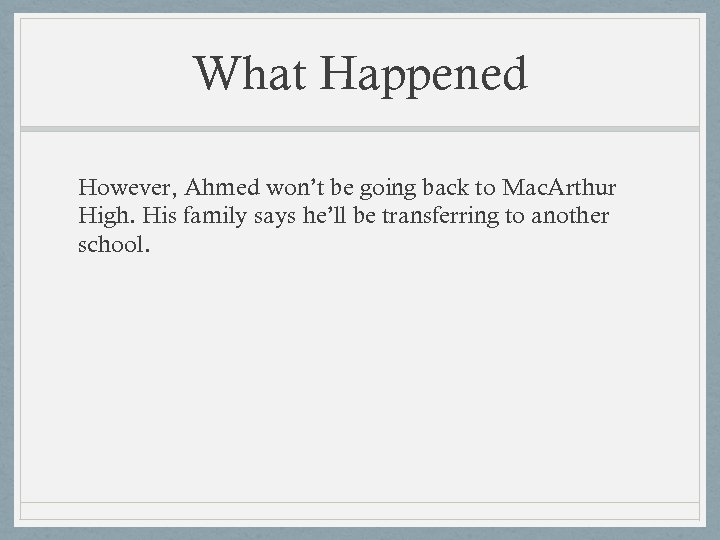 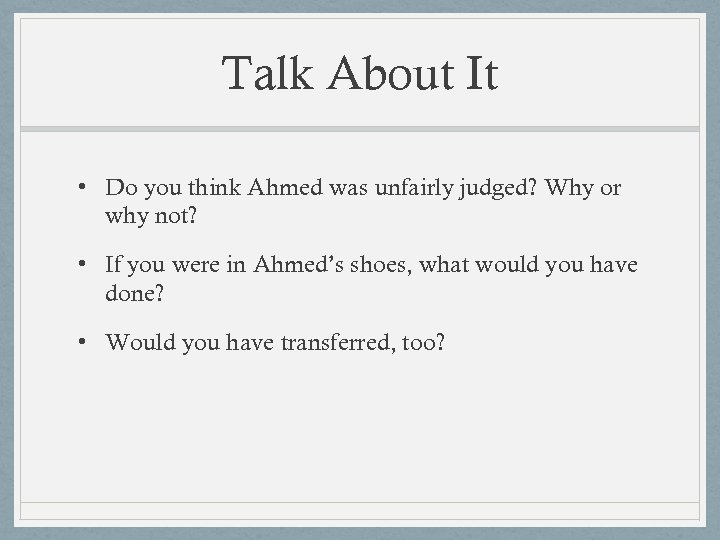 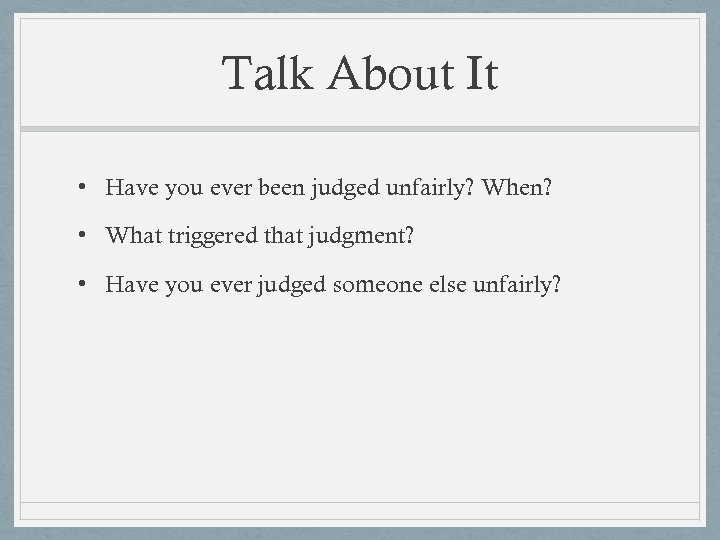 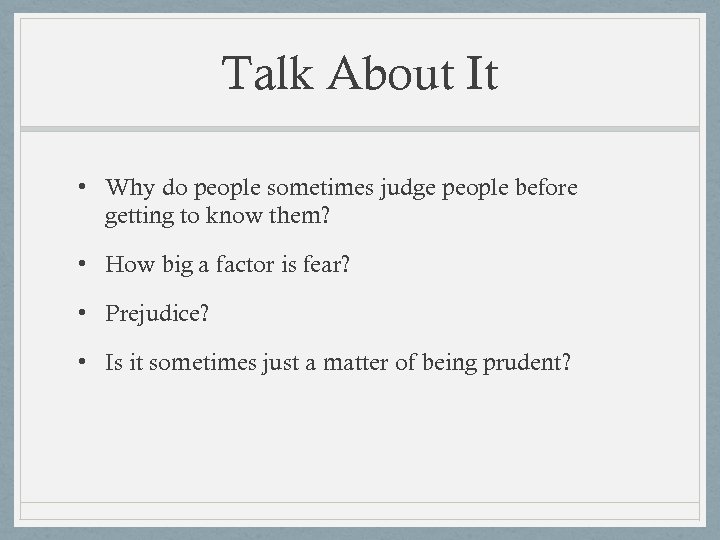 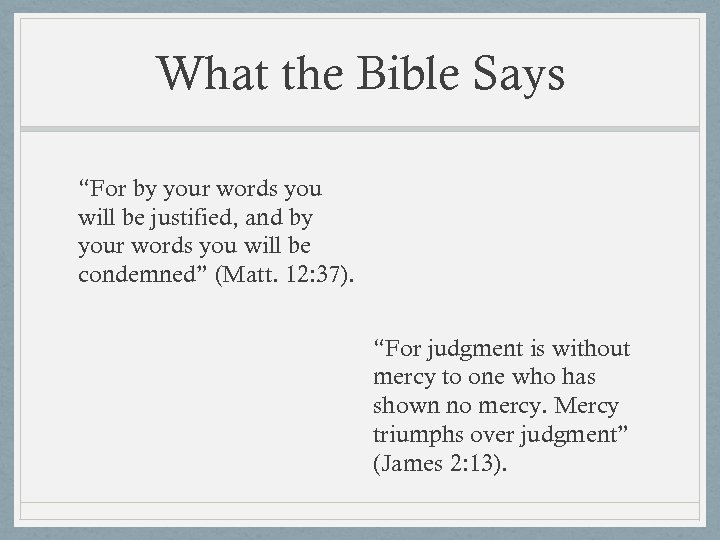 What Happened Are you glad school’s back in session? Stressed? Wish it was summer again? Well, no matter how rough the new school year started for you, you’re probably having an easier time than Ahmed Mohamed.

What Happened Ahmed, an incoming freshman for Mac. Arthur High School in Irving, Texas, was pretty excited about the clock he built, and rightly so. After all, it’s not many 14 -year-olds who can make a digital clock from a pencil case. However, when he brought the clock to school, officials thought it was a bomb. The police were called, and Ahmed was pulled out of class and interrogated for 90 minutes.

What Happened Ahmed believes he was singled out because of his skin color (his family immigrated from Sudan) and faith (he’s Muslim). In middle school, Ahmed was often called a bomb maker and a terrorist by schoolmates. When he walked into the interrogation room, one of the officers reportedly said, “That’s who I thought it was, ” suggesting that some preconceptions already had been made about Ahmed before the questioning began.

What Happened Ahmed and his clock eventually were let go, but officials still suspended the teen for three days, and the district offered public support for the teacher who reported the clock as suspicious. In the meantime, Mac. Arthur High found itself the subject of withering criticism. Ahmed has been the subject of hundreds of thousands of supporting tweets, and he received an invitation to Facebook headquarters, the White House and the campus of MIT, where Ahmed wants to go after high school graduation.

What Happened However, Ahmed won’t be going back to Mac. Arthur High. His family says he’ll be transferring to another school.

Talk About It • Do you think Ahmed was unfairly judged? Why or why not? • If you were in Ahmed’s shoes, what would you have done? • Would you have transferred, too?

Talk About It Ahmed’s case is an unusual one, but the sensation of being judged unfairly is something many of us can sympathize with. Maybe we’re especially prone to unfair judgment at this time of year, when lots of us are in a new grade, new classes and perhaps new schools. Sometimes teachers or school officials can jump to conclusions about who we are based on how we look or family history. Schoolmates can make snap decisions about peers based on race, dress or circle of friends.

Talk About It • Why do people sometimes judge people before getting to know them? • How big a factor is fear? • Prejudice? • Is it sometimes just a matter of being prudent?

What the Bible Says “Why do you pass judgment on your brother? Or you, why do you despise your brother? For we will all stand before the judgment seat of God; for it is written, ‘As I live, ’ says the Lord, ‘every knee shall bow to Me, and every tongue shall confess to God. So then each of us will give an account of himself to God” (Rom. 14: 10 -12).

What the Bible Says “For if a man wearing a gold ring and fine clothing comes into your assembly, and a poor man in shabby clothing also comes in, and if you pay attention to the one who wears the fine clothing and say, ‘You sit here in a good place, ’ while you say to the poor man, ‘You stand over there, ’ or, ‘Sit down at my feet, ’ have you not then made distinctions among yourselves and become judges with evil thoughts? ” (James 2: 2 -4).