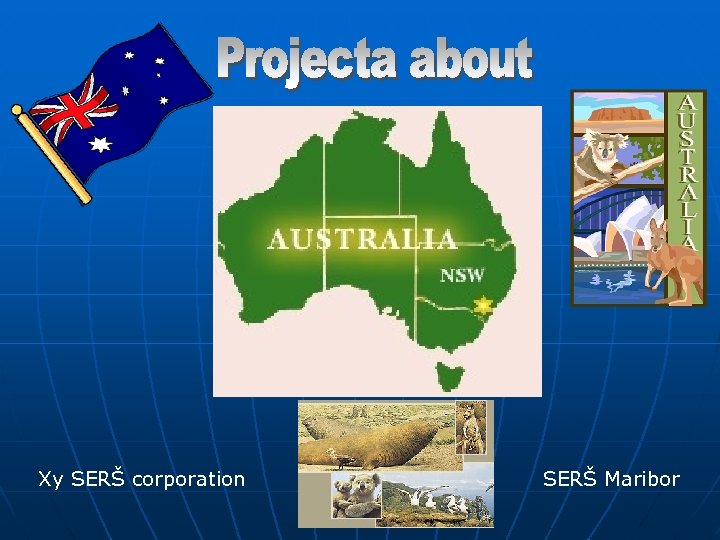 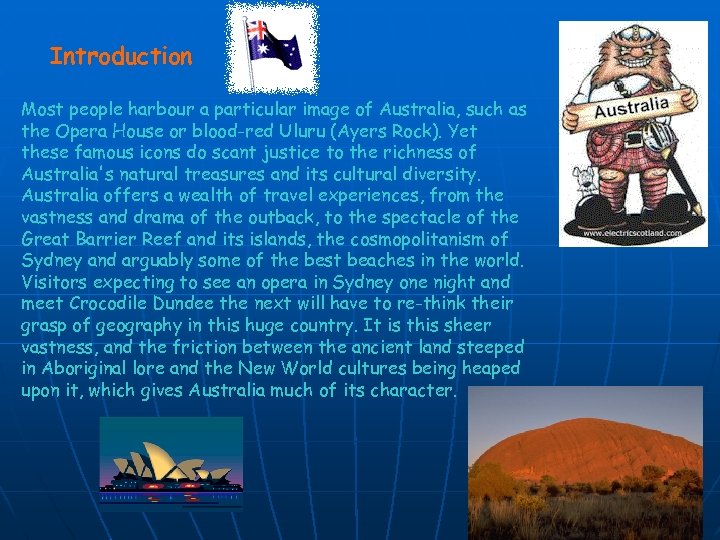 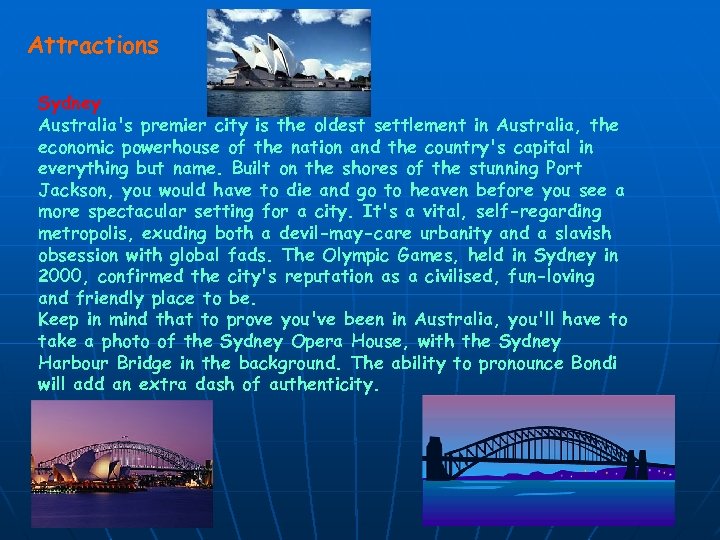 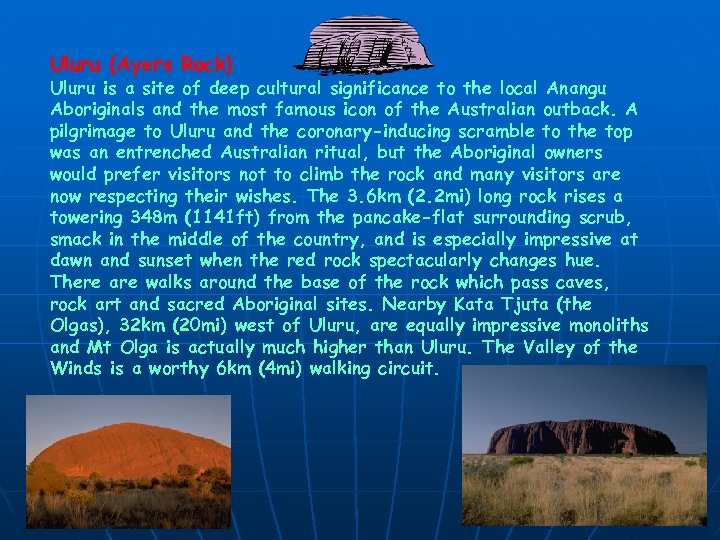 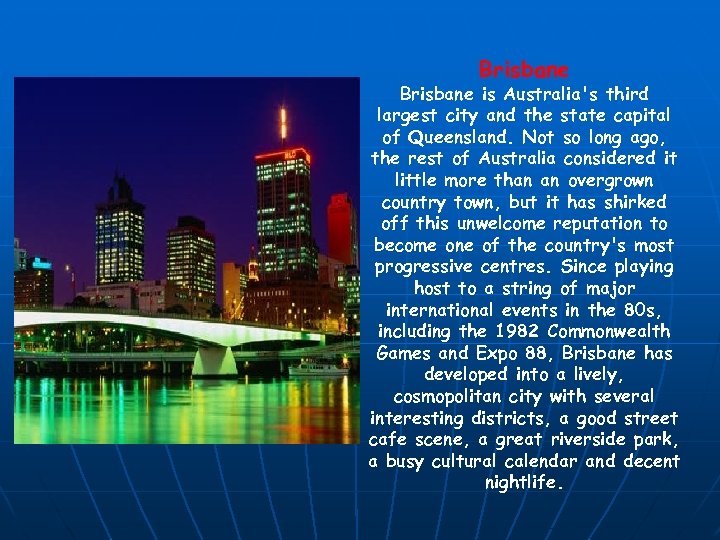 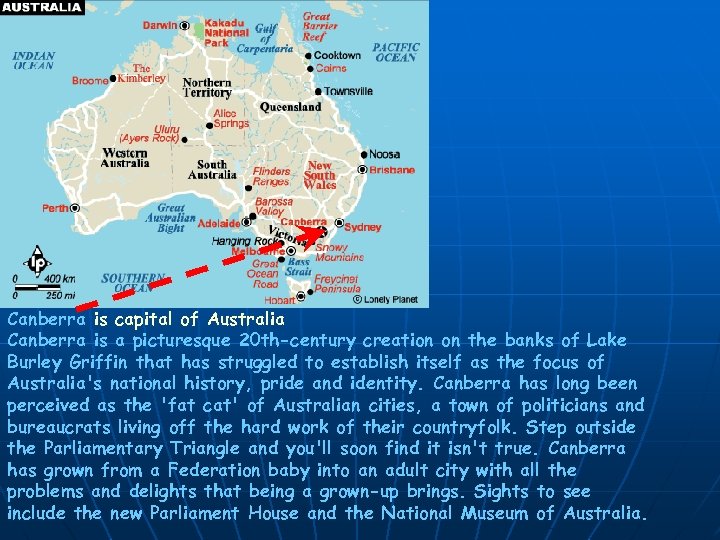 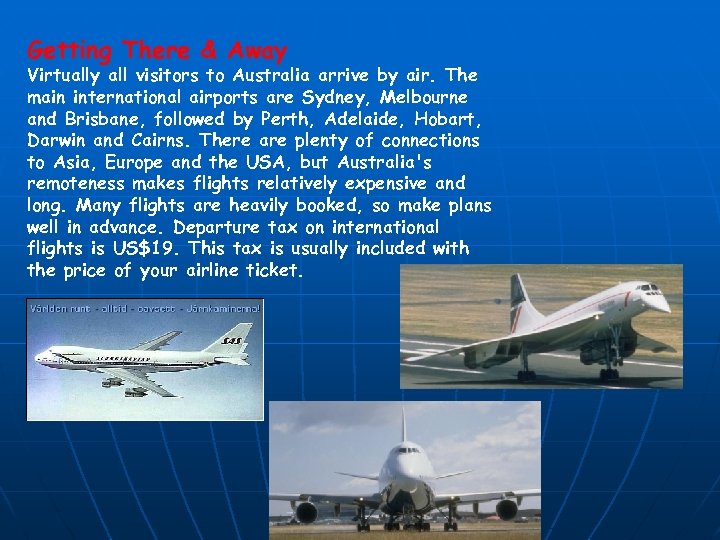 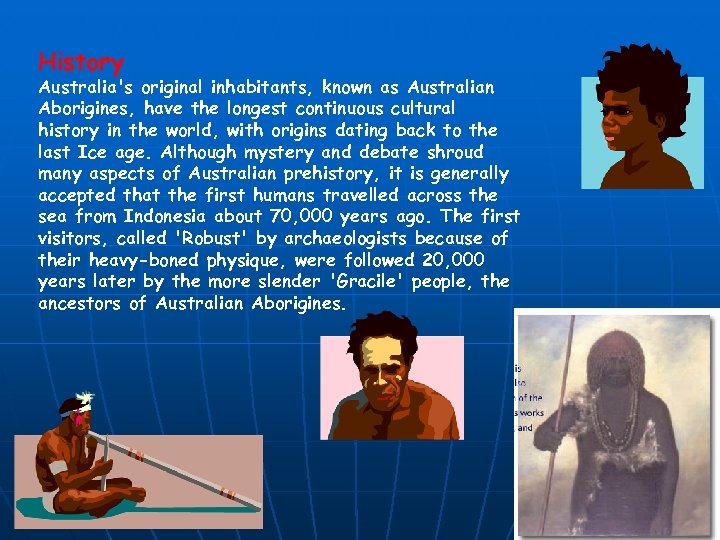 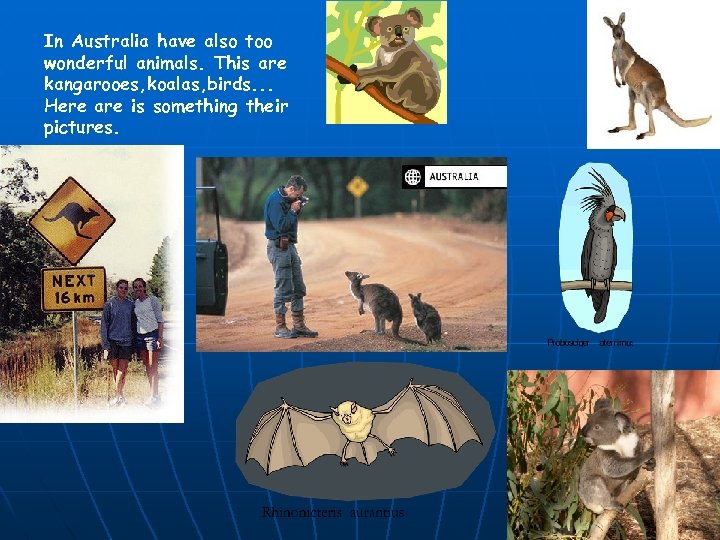 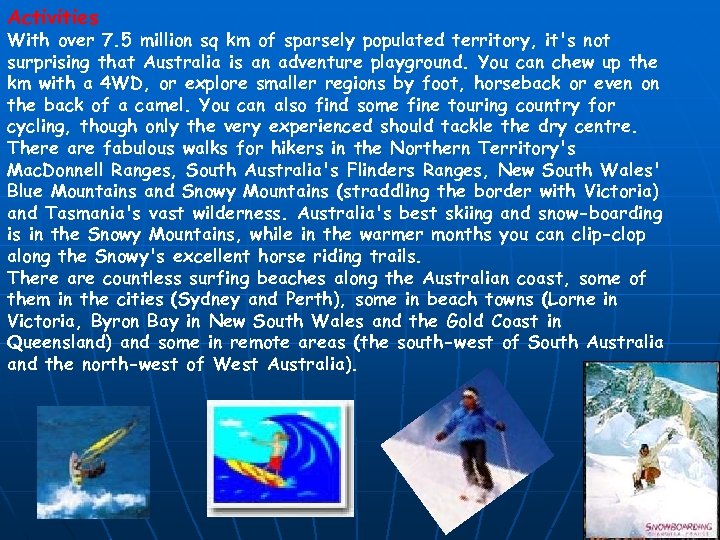 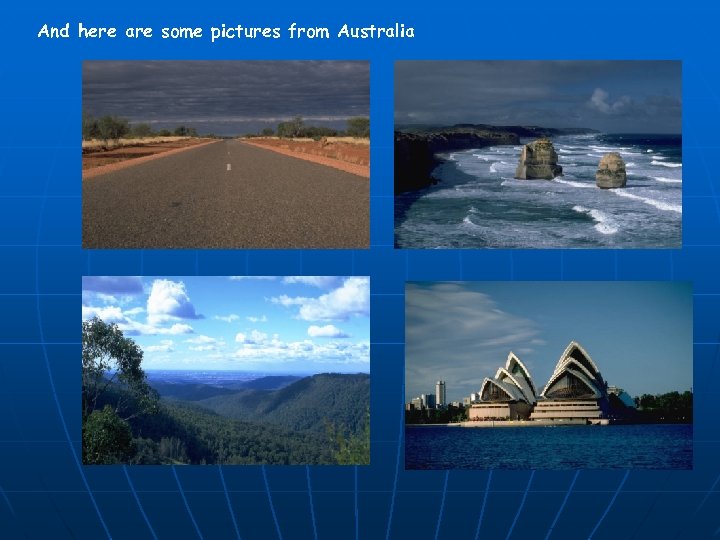 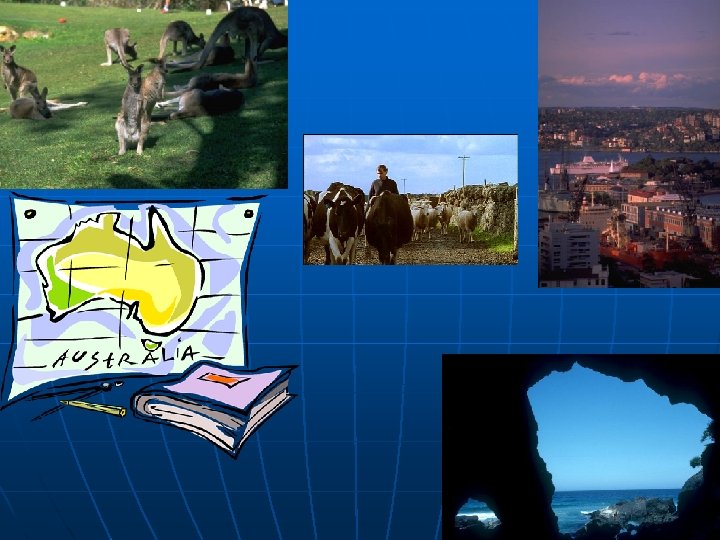 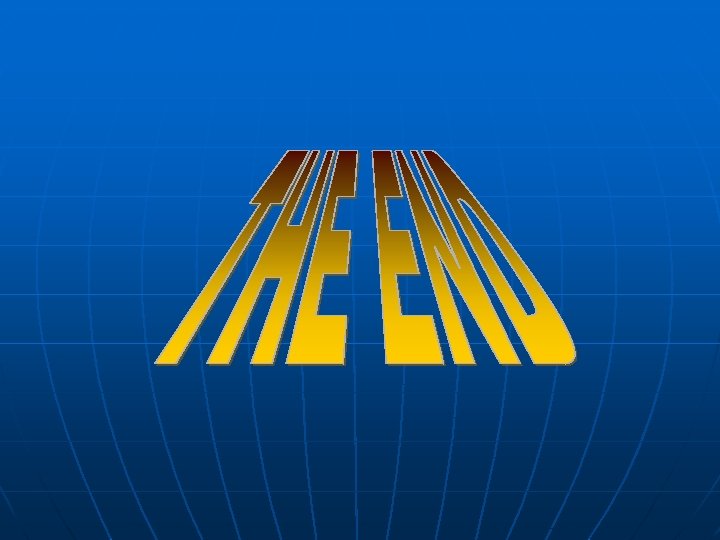 Introduction Most people harbour a particular image of Australia, such as the Opera House or blood-red Uluru (Ayers Rock). Yet these famous icons do scant justice to the richness of Australia's natural treasures and its cultural diversity. Australia offers a wealth of travel experiences, from the vastness and drama of the outback, to the spectacle of the Great Barrier Reef and its islands, the cosmopolitanism of Sydney and arguably some of the best beaches in the world. Visitors expecting to see an opera in Sydney one night and meet Crocodile Dundee the next will have to re-think their grasp of geography in this huge country. It is this sheer vastness, and the friction between the ancient land steeped in Aboriginal lore and the New World cultures being heaped upon it, which gives Australia much of its character.

Attractions Sydney Australia's premier city is the oldest settlement in Australia, the economic powerhouse of the nation and the country's capital in everything but name. Built on the shores of the stunning Port Jackson, you would have to die and go to heaven before you see a more spectacular setting for a city. It's a vital, self-regarding metropolis, exuding both a devil-may-care urbanity and a slavish obsession with global fads. The Olympic Games, held in Sydney in 2000, confirmed the city's reputation as a civilised, fun-loving and friendly place to be. Keep in mind that to prove you've been in Australia, you'll have to take a photo of the Sydney Opera House, with the Sydney Harbour Bridge in the background. The ability to pronounce Bondi will add an extra dash of authenticity.

Uluru (Ayers Rock) Uluru is a site of deep cultural significance to the local Anangu Aboriginals and the most famous icon of the Australian outback. A pilgrimage to Uluru and the coronary-inducing scramble to the top was an entrenched Australian ritual, but the Aboriginal owners would prefer visitors not to climb the rock and many visitors are now respecting their wishes. The 3. 6 km (2. 2 mi) long rock rises a towering 348 m (1141 ft) from the pancake-flat surrounding scrub, smack in the middle of the country, and is especially impressive at dawn and sunset when the red rock spectacularly changes hue. There are walks around the base of the rock which pass caves, rock art and sacred Aboriginal sites. Nearby Kata Tjuta (the Olgas), 32 km (20 mi) west of Uluru, are equally impressive monoliths and Mt Olga is actually much higher than Uluru. The Valley of the Winds is a worthy 6 km (4 mi) walking circuit.

Brisbane is Australia's third largest city and the state capital of Queensland. Not so long ago, the rest of Australia considered it little more than an overgrown country town, but it has shirked off this unwelcome reputation to become one of the country's most progressive centres. Since playing host to a string of major international events in the 80 s, including the 1982 Commonwealth Games and Expo 88, Brisbane has developed into a lively, cosmopolitan city with several interesting districts, a good street cafe scene, a great riverside park, a busy cultural calendar and decent nightlife.

Canberra is capital of Australia Canberra is a picturesque 20 th-century creation on the banks of Lake Burley Griffin that has struggled to establish itself as the focus of Australia's national history, pride and identity. Canberra has long been perceived as the 'fat cat' of Australian cities, a town of politicians and bureaucrats living off the hard work of their countryfolk. Step outside the Parliamentary Triangle and you'll soon find it isn't true. Canberra has grown from a Federation baby into an adult city with all the problems and delights that being a grown-up brings. Sights to see include the new Parliament House and the National Museum of Australia.

Getting There & Away Virtually all visitors to Australia arrive by air. The main international airports are Sydney, Melbourne and Brisbane, followed by Perth, Adelaide, Hobart, Darwin and Cairns. There are plenty of connections to Asia, Europe and the USA, but Australia's remoteness makes flights relatively expensive and long. Many flights are heavily booked, so make plans well in advance. Departure tax on international flights is US$19. This tax is usually included with the price of your airline ticket.

History Australia's original inhabitants, known as Australian Aborigines, have the longest continuous cultural history in the world, with origins dating back to the last Ice age. Although mystery and debate shroud many aspects of Australian prehistory, it is generally accepted that the first humans travelled across the sea from Indonesia about 70, 000 years ago. The first visitors, called 'Robust' by archaeologists because of their heavy-boned physique, were followed 20, 000 years later by the more slender 'Gracile' people, the ancestors of Australian Aborigines.

In Australia have also too wonderful animals. This are kangarooes, koalas, birds. . . Here are is something their pictures.

Activities With over 7. 5 million sq km of sparsely populated territory, it's not surprising that Australia is an adventure playground. You can chew up the km with a 4 WD, or explore smaller regions by foot, horseback or even on the back of a camel. You can also find some fine touring country for cycling, though only the very experienced should tackle the dry centre. There are fabulous walks for hikers in the Northern Territory's Mac. Donnell Ranges, South Australia's Flinders Ranges, New South Wales' Blue Mountains and Snowy Mountains (straddling the border with Victoria) and Tasmania's vast wilderness. Australia's best skiing and snow-boarding is in the Snowy Mountains, while in the warmer months you can clip-clop along the Snowy's excellent horse riding trails. There are countless surfing beaches along the Australian coast, some of them in the cities (Sydney and Perth), some in beach towns (Lorne in Victoria, Byron Bay in New South Wales and the Gold Coast in Queensland) and some in remote areas (the south-west of South Australia and the north-west of West Australia).

And here are some pictures from Australia