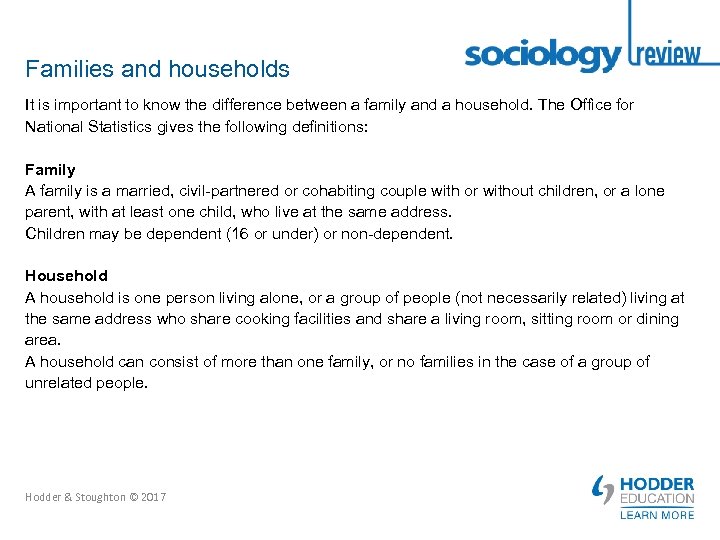 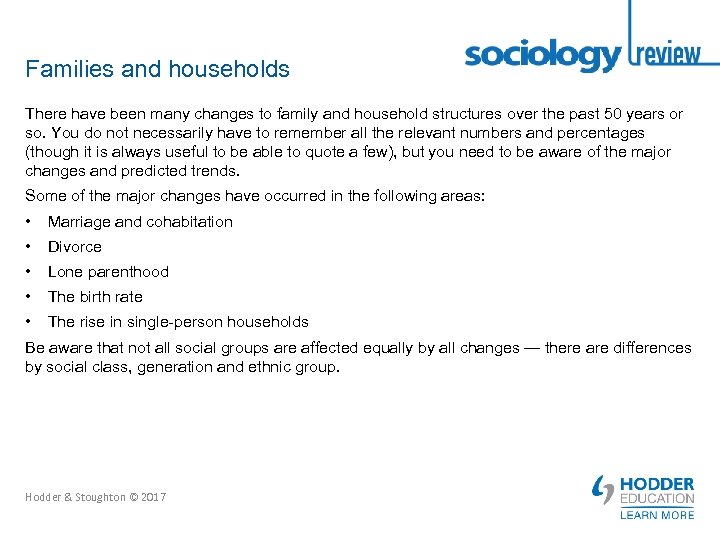 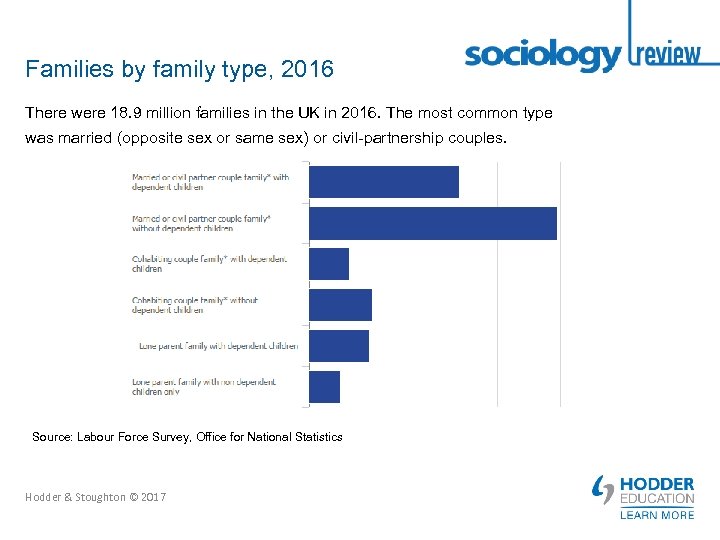 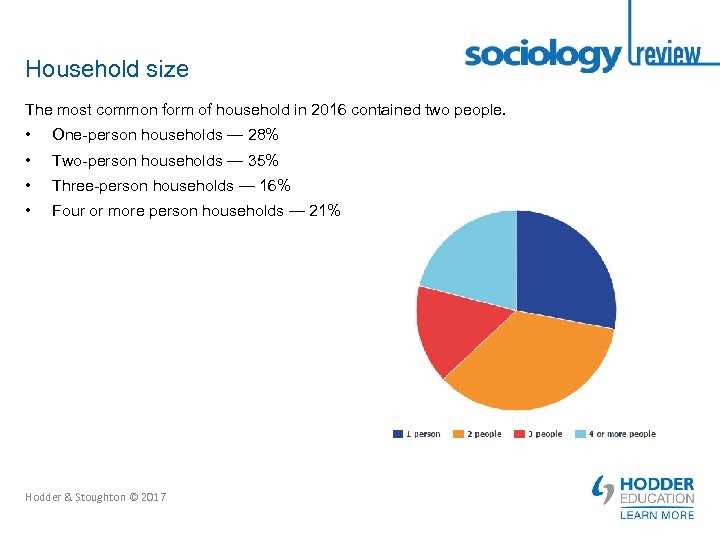 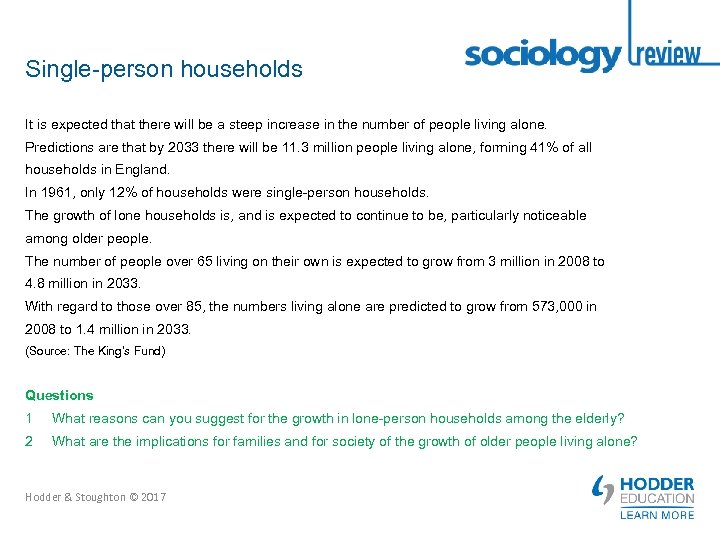 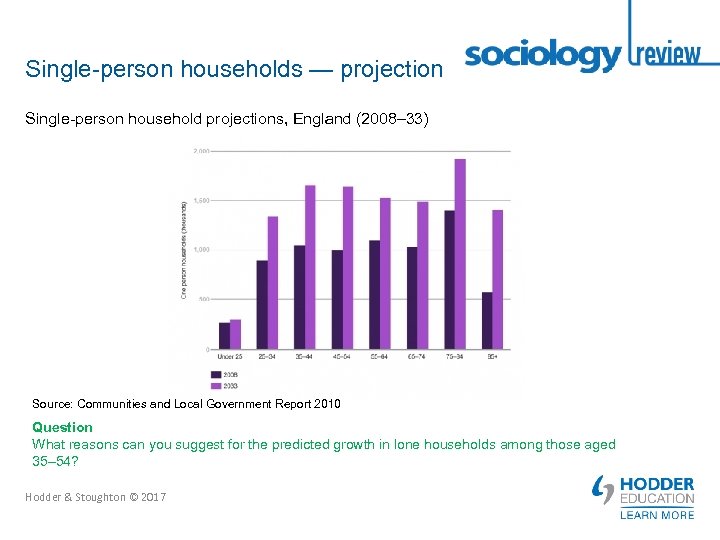 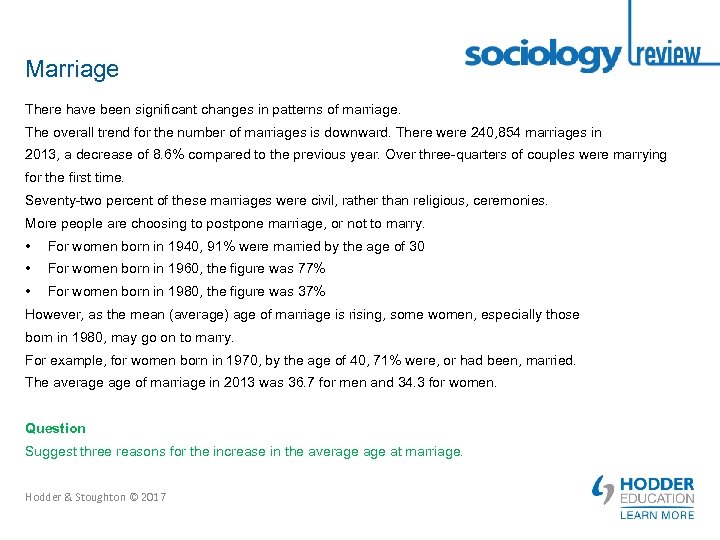 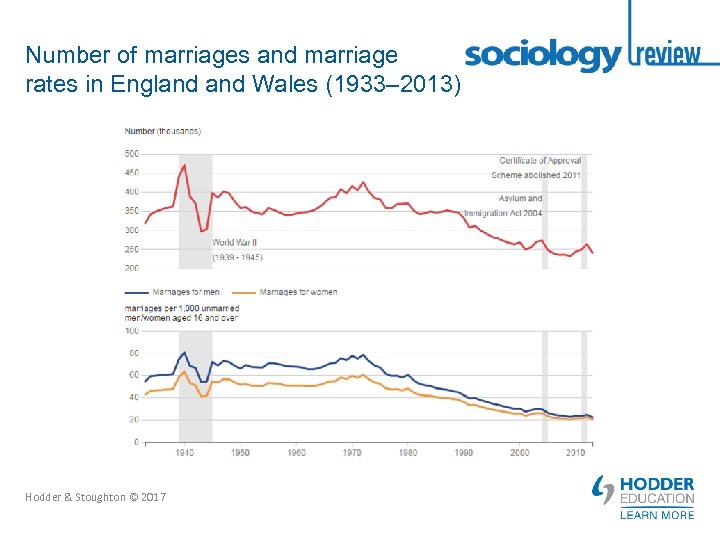 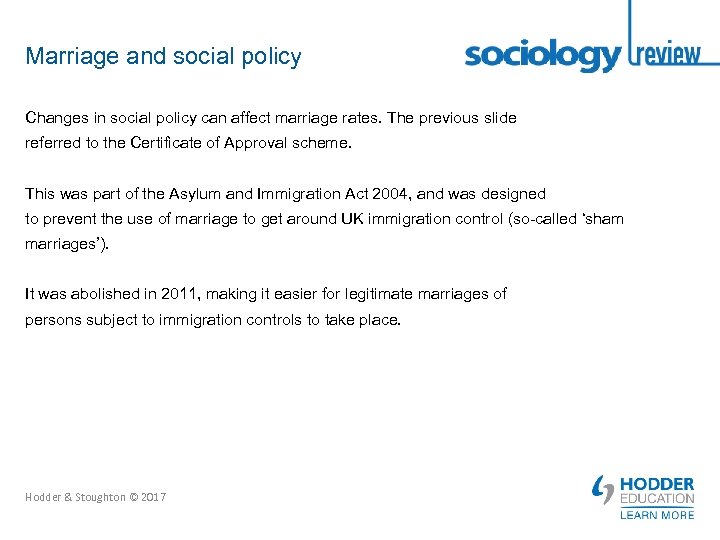 Families and households It is important to know the difference between a family and a household. The Office for National Statistics gives the following definitions: Family A family is a married, civil-partnered or cohabiting couple with or without children, or a lone parent, with at least one child, who live at the same address. Children may be dependent (16 or under) or non-dependent. Household A household is one person living alone, or a group of people (not necessarily related) living at the same address who share cooking facilities and share a living room, sitting room or dining area. A household can consist of more than one family, or no families in the case of a group of unrelated people. Hodder & Stoughton © 2017

Families and households There have been many changes to family and household structures over the past 50 years or so. You do not necessarily have to remember all the relevant numbers and percentages (though it is always useful to be able to quote a few), but you need to be aware of the major changes and predicted trends. Some of the major changes have occurred in the following areas: • Marriage and cohabitation • Divorce • Lone parenthood • The birth rate • The rise in single-person households Be aware that not all social groups are affected equally by all changes — there are differences by social class, generation and ethnic group. Hodder & Stoughton © 2017

Families by family type, 2016 There were 18. 9 million families in the UK in 2016. The most common type was married (opposite sex or same sex) or civil-partnership couples. Source: Labour Force Survey, Office for National Statistics Hodder & Stoughton © 2017

Marriage There have been significant changes in patterns of marriage. The overall trend for the number of marriages is downward. There were 240, 854 marriages in 2013, a decrease of 8. 6% compared to the previous year. Over three-quarters of couples were marrying for the first time. Seventy-two percent of these marriages were civil, rather than religious, ceremonies. More people are choosing to postpone marriage, or not to marry. • For women born in 1940, 91% were married by the age of 30 • For women born in 1960, the figure was 77% • For women born in 1980, the figure was 37% However, as the mean (average) age of marriage is rising, some women, especially those born in 1980, may go on to marry. For example, for women born in 1970, by the age of 40, 71% were, or had been, married. The average of marriage in 2013 was 36. 7 for men and 34. 3 for women. Question Suggest three reasons for the increase in the average at marriage. Hodder & Stoughton © 2017

Marriage and social policy Changes in social policy can affect marriage rates. The previous slide referred to the Certificate of Approval scheme. This was part of the Asylum and Immigration Act 2004, and was designed to prevent the use of marriage to get around UK immigration control (so-called ‘sham marriages’). It was abolished in 2011, making it easier for legitimate marriages of persons subject to immigration controls to take place. Hodder & Stoughton © 2017