Wuthering Heights Context of Production and of Reception 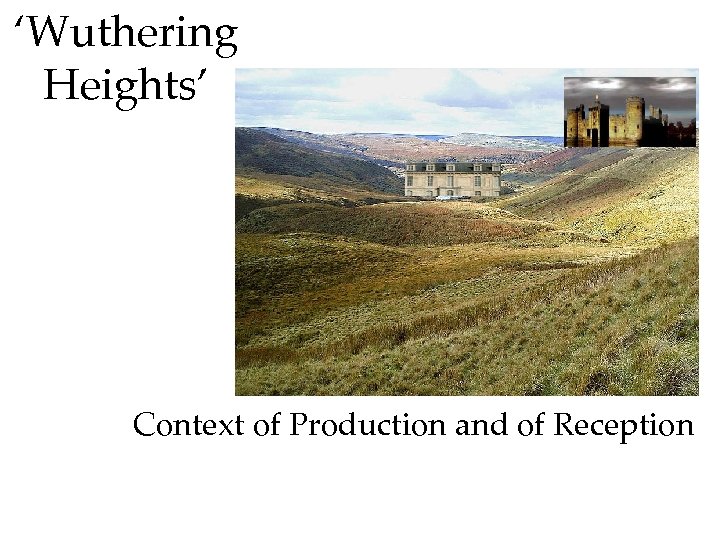 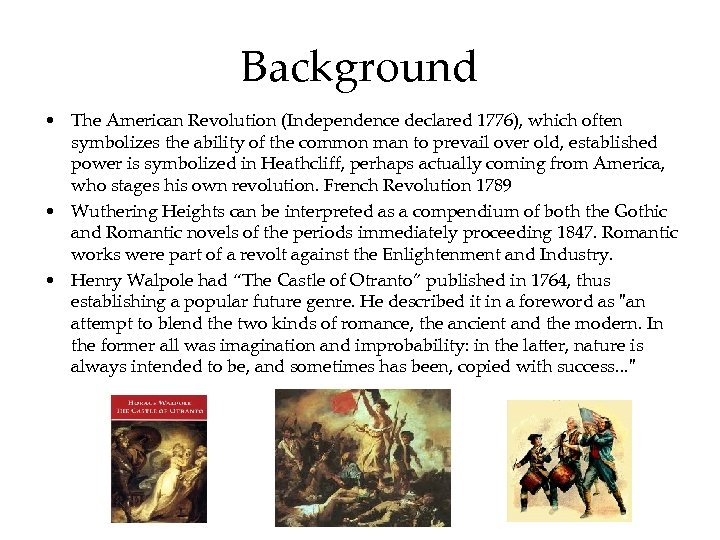 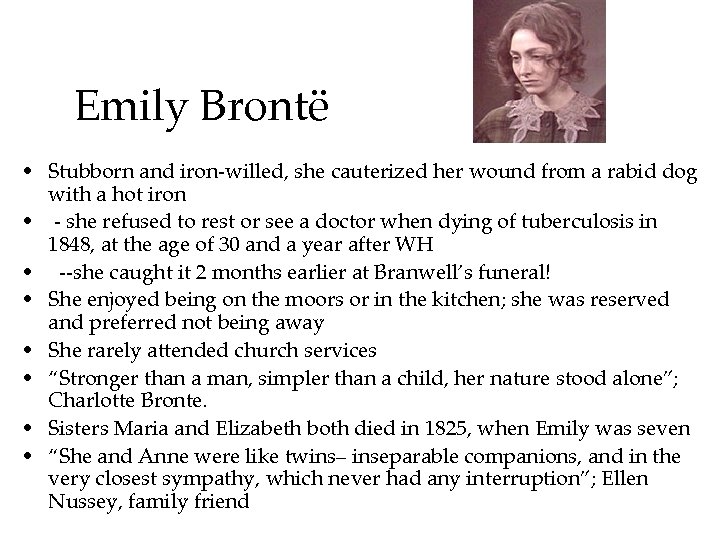 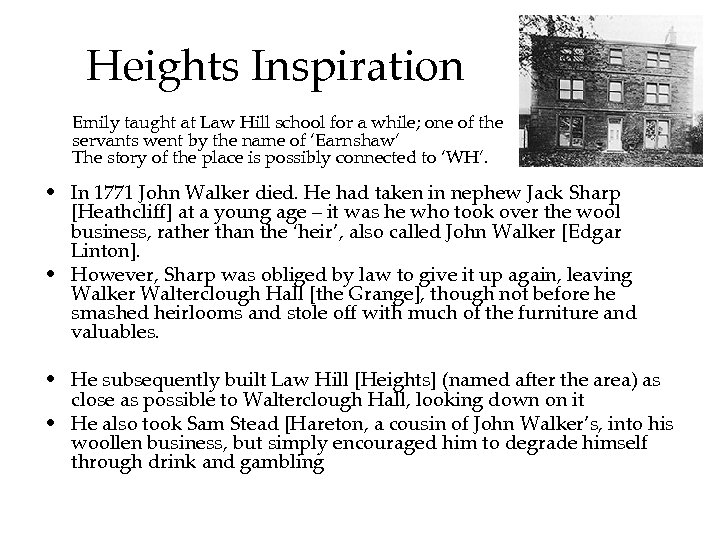 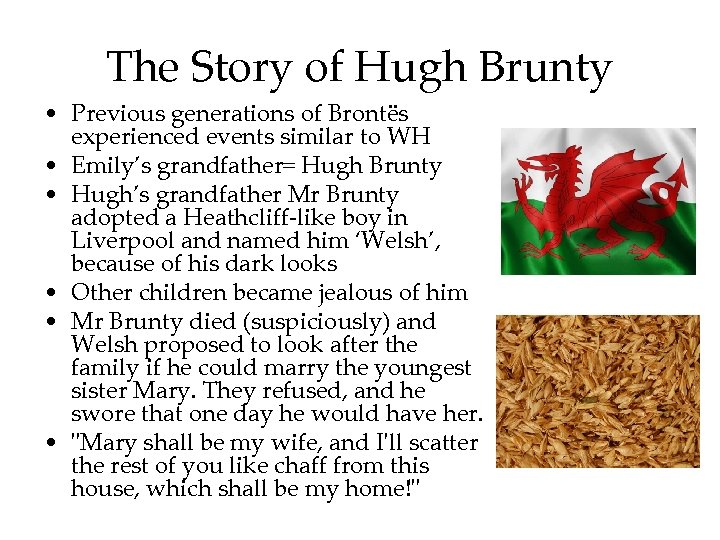 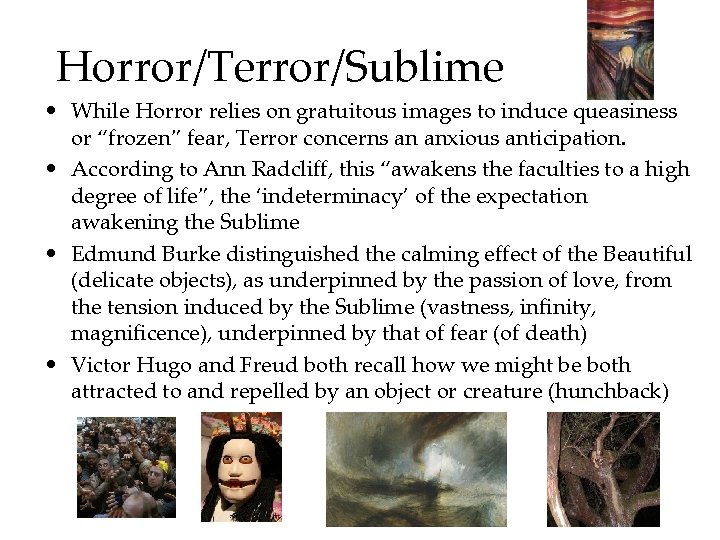 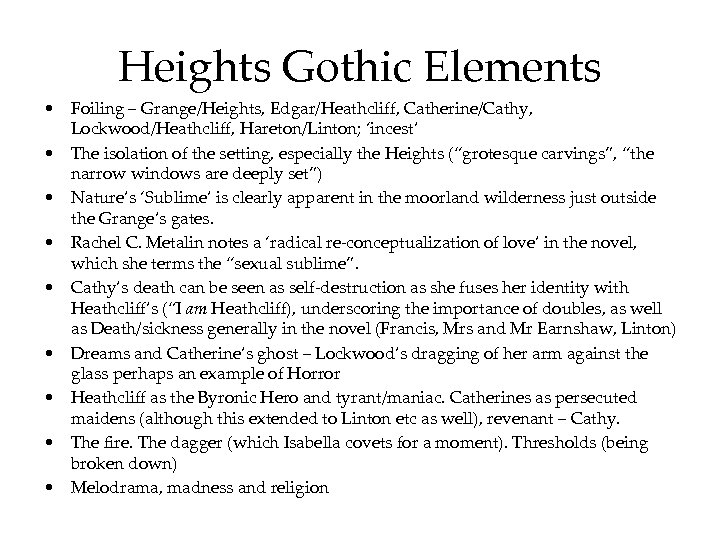 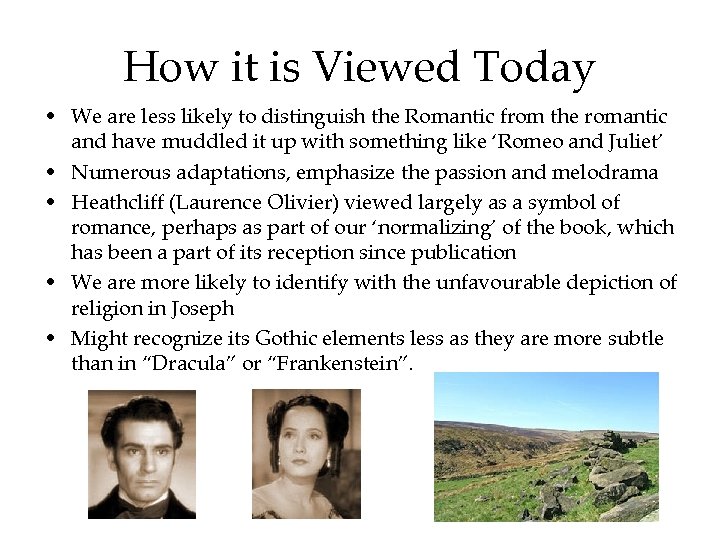 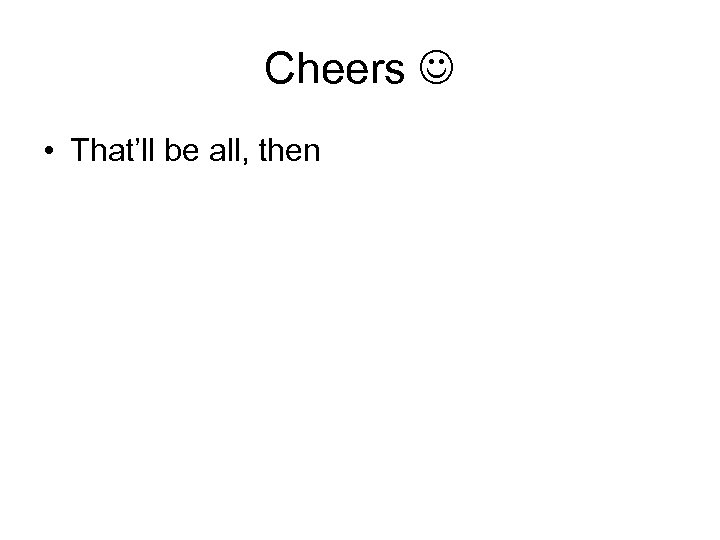 Скачать презентацию Wuthering Heights Context of Production and of Reception

‘Wuthering Heights’ Context of Production and of Reception

Background • The American Revolution (Independence declared 1776), which often symbolizes the ability of the common man to prevail over old, established power is symbolized in Heathcliff, perhaps actually coming from America, who stages his own revolution. French Revolution 1789 • Wuthering Heights can be interpreted as a compendium of both the Gothic and Romantic novels of the periods immediately proceeding 1847. Romantic works were part of a revolt against the Enlightenment and Industry. • Henry Walpole had “The Castle of Otranto” published in 1764, thus establishing a popular future genre. He described it in a foreword as "an attempt to blend the two kinds of romance, the ancient and the modern. In the former all was imagination and improbability: in the latter, nature is always intended to be, and sometimes has been, copied with success. . . "

Emily Brontë • Stubborn and iron-willed, she cauterized her wound from a rabid dog with a hot iron • - she refused to rest or see a doctor when dying of tuberculosis in 1848, at the age of 30 and a year after WH • --she caught it 2 months earlier at Branwell’s funeral! • She enjoyed being on the moors or in the kitchen; she was reserved and preferred not being away • She rarely attended church services • “Stronger than a man, simpler than a child, her nature stood alone”; Charlotte Bronte. • Sisters Maria and Elizabeth both died in 1825, when Emily was seven • “She and Anne were like twins– inseparable companions, and in the very closest sympathy, which never had any interruption”; Ellen Nussey, family friend

Heights Inspiration Emily taught at Law Hill school for a while; one of the servants went by the name of ‘Earnshaw’ The story of the place is possibly connected to ‘WH’. • In 1771 John Walker died. He had taken in nephew Jack Sharp [Heathcliff] at a young age – it was he who took over the wool business, rather than the ‘heir’, also called John Walker [Edgar Linton]. • However, Sharp was obliged by law to give it up again, leaving Walker Walterclough Hall [the Grange], though not before he smashed heirlooms and stole off with much of the furniture and valuables. • He subsequently built Law Hill [Heights] (named after the area) as close as possible to Walterclough Hall, looking down on it • He also took Sam Stead [Hareton, a cousin of John Walker’s, into his woollen business, but simply encouraged him to degrade himself through drink and gambling

The Story of Hugh Brunty • Previous generations of Brontës experienced events similar to WH • Emily’s grandfather= Hugh Brunty • Hugh’s grandfather Mr Brunty adopted a Heathcliff-like boy in Liverpool and named him ‘Welsh’, because of his dark looks • Other children became jealous of him • Mr Brunty died (suspiciously) and Welsh proposed to look after the family if he could marry the youngest sister Mary. They refused, and he swore that one day he would have her. • "Mary shall be my wife, and I'll scatter the rest of you like chaff from this house, which shall be my home!"

Horror/Terror/Sublime • While Horror relies on gratuitous images to induce queasiness or “frozen” fear, Terror concerns an anxious anticipation. • According to Ann Radcliff, this “awakens the faculties to a high degree of life”, the ‘indeterminacy’ of the expectation awakening the Sublime • Edmund Burke distinguished the calming effect of the Beautiful (delicate objects), as underpinned by the passion of love, from the tension induced by the Sublime (vastness, infinity, magnificence), underpinned by that of fear (of death) • Victor Hugo and Freud both recall how we might be both attracted to and repelled by an object or creature (hunchback)

Heights Gothic Elements • Foiling – Grange/Heights, Edgar/Heathcliff, Catherine/Cathy, Lockwood/Heathcliff, Hareton/Linton; ‘incest’ • The isolation of the setting, especially the Heights (“grotesque carvings”, “the narrow windows are deeply set”) • Nature’s ‘Sublime’ is clearly apparent in the moorland wilderness just outside the Grange’s gates. • Rachel C. Metalin notes a ‘radical re-conceptualization of love’ in the novel, which she terms the “sexual sublime”. • Cathy’s death can be seen as self-destruction as she fuses her identity with Heathcliff’s (“I am Heathcliff), underscoring the importance of doubles, as well as Death/sickness generally in the novel (Francis, Mrs and Mr Earnshaw, Linton) • Dreams and Catherine’s ghost – Lockwood’s dragging of her arm against the glass perhaps an example of Horror • Heathcliff as the Byronic Hero and tyrant/maniac. Catherines as persecuted maidens (although this extended to Linton etc as well), revenant – Cathy. • The fire. The dagger (which Isabella covets for a moment). Thresholds (being broken down) • Melodrama, madness and religion

How it is Viewed Today • We are less likely to distinguish the Romantic from the romantic and have muddled it up with something like ‘Romeo and Juliet’ • Numerous adaptations, emphasize the passion and melodrama • Heathcliff (Laurence Olivier) viewed largely as a symbol of romance, perhaps as part of our ‘normalizing’ of the book, which has been a part of its reception since publication • We are more likely to identify with the unfavourable depiction of religion in Joseph • Might recognize its Gothic elements less as they are more subtle than in “Dracula” or “Frankenstein”.

Cheers • That’ll be all, then