WRITING PARAGRAPHS Consumers at the high end are 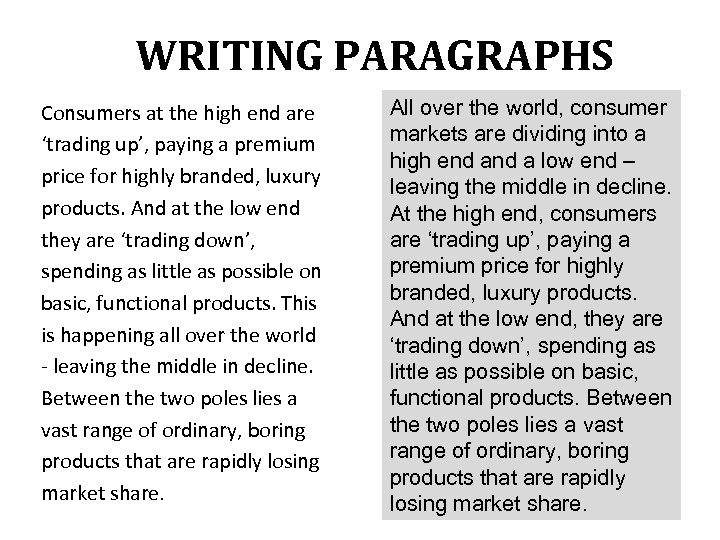 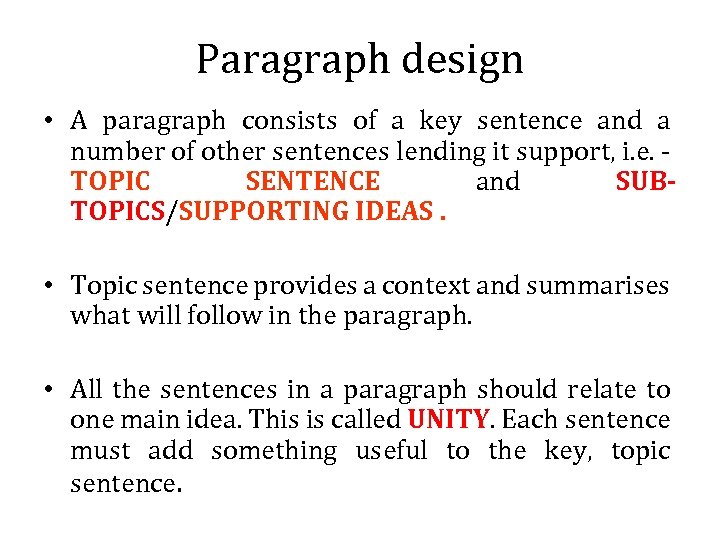 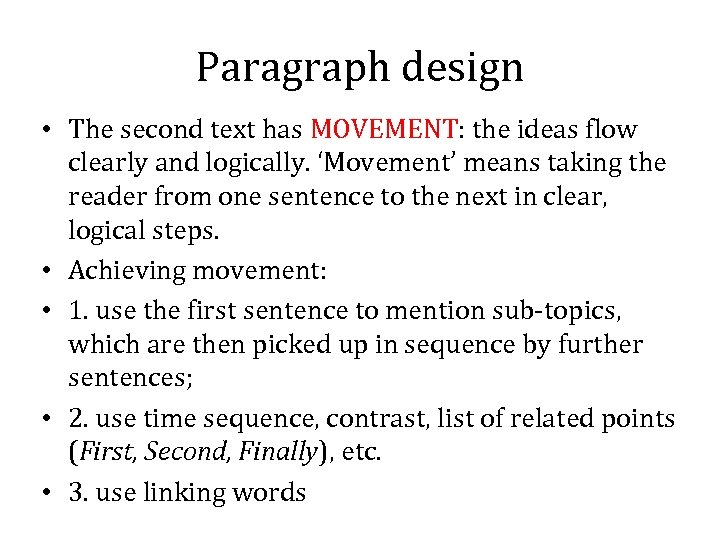 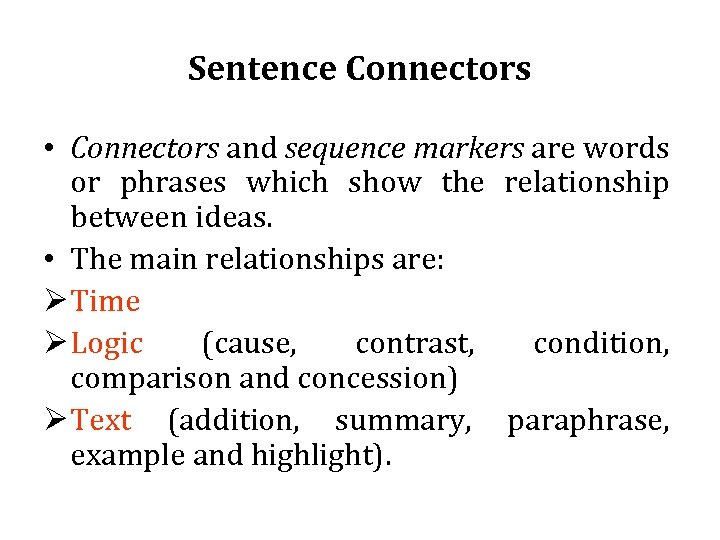 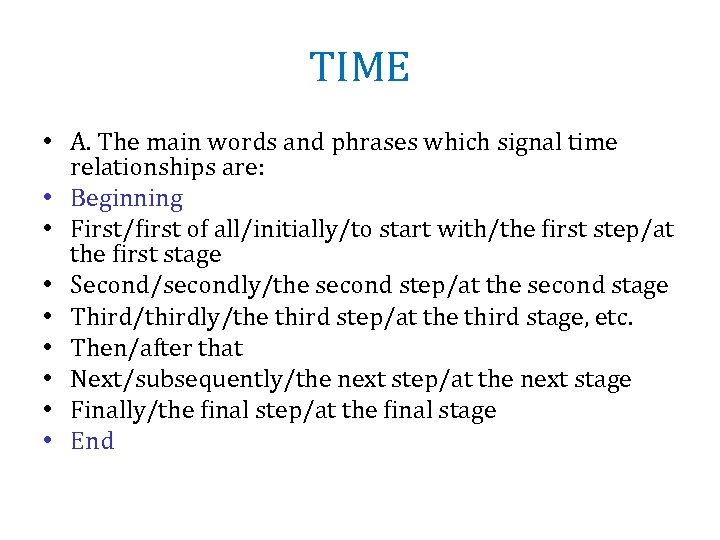 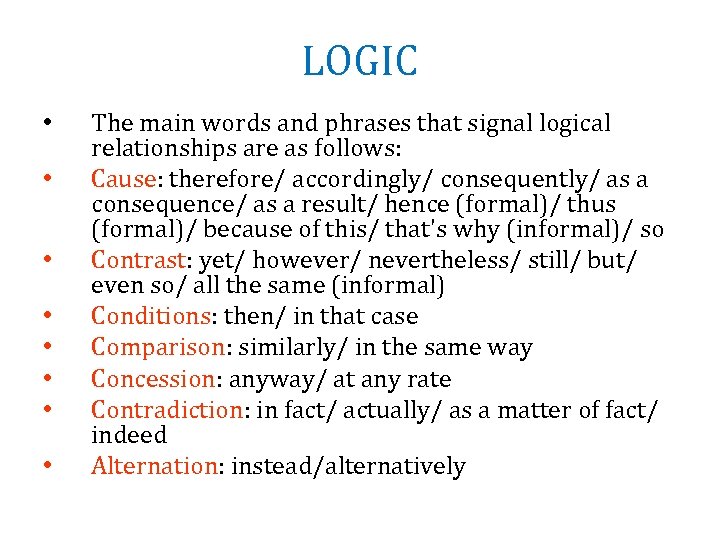 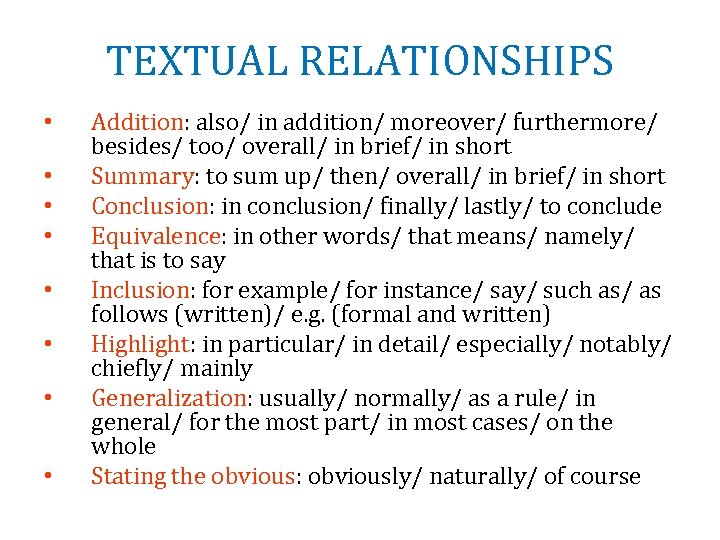 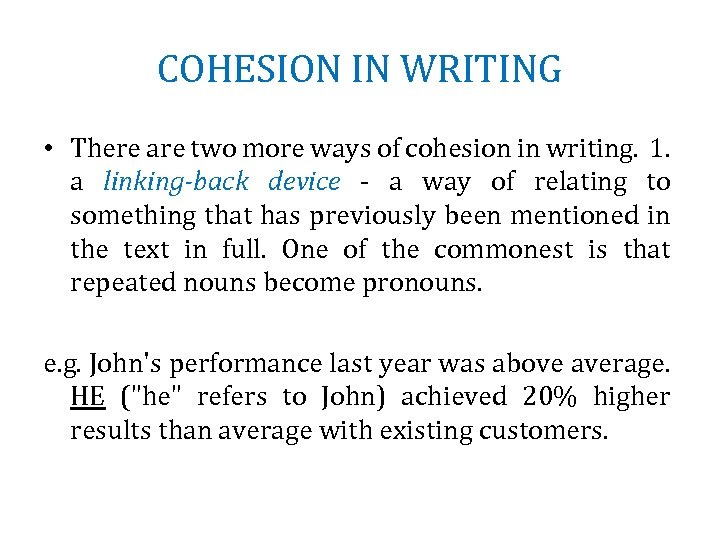 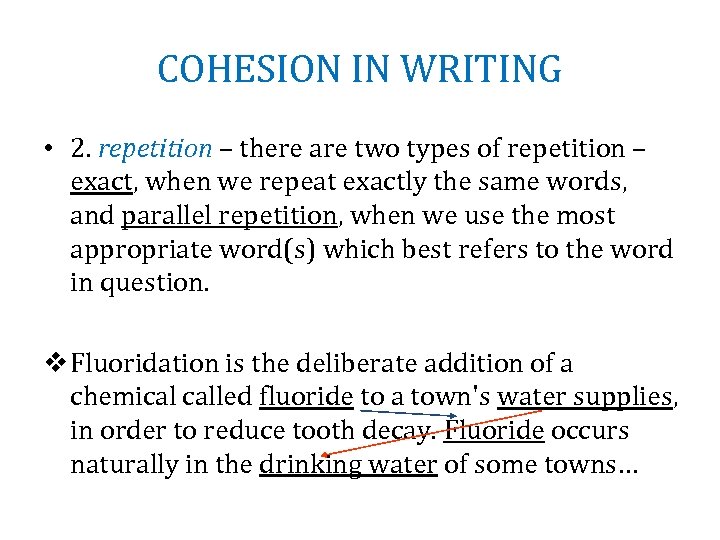 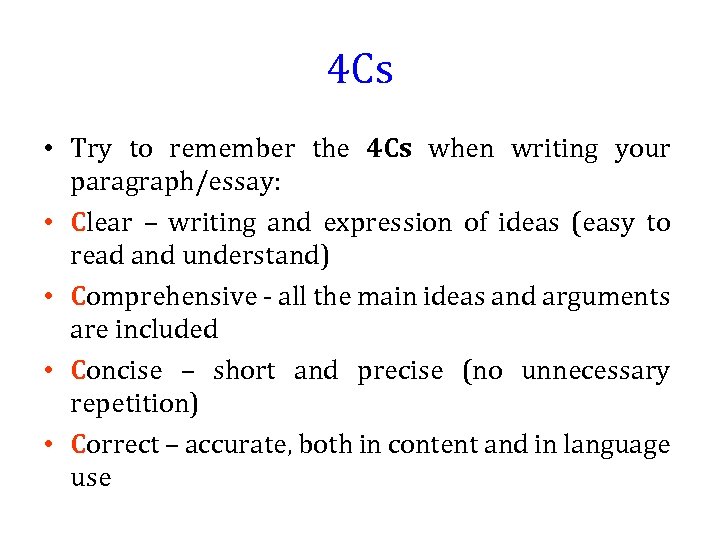 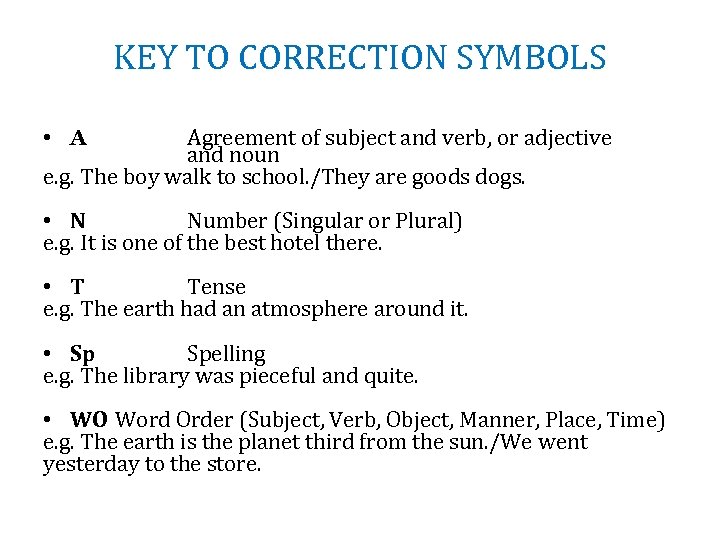 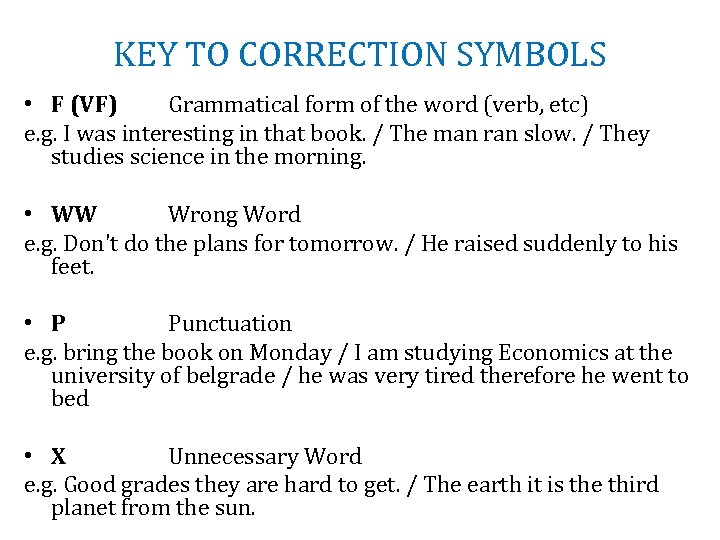 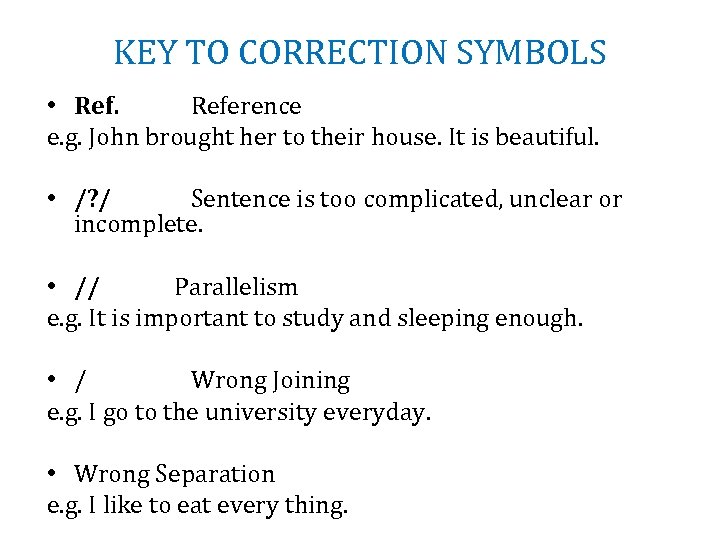 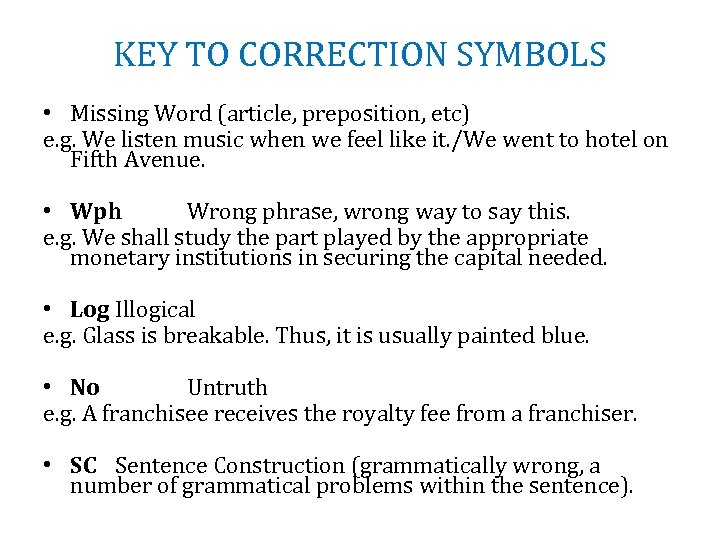 Скачать презентацию WRITING PARAGRAPHS Consumers at the high end are

Paragraph design • A paragraph consists of a key sentence and a number of other sentences lending it support, i. e. TOPIC SENTENCE and SUBTOPICS/SUPPORTING IDEAS. • Topic sentence provides a context and summarises what will follow in the paragraph. • All the sentences in a paragraph should relate to one main idea. This is called UNITY. Each sentence must add something useful to the key, topic sentence.

Paragraph design • The second text has MOVEMENT: the ideas flow clearly and logically. ‘Movement’ means taking the reader from one sentence to the next in clear, logical steps. • Achieving movement: • 1. use the first sentence to mention sub-topics, which are then picked up in sequence by further sentences; • 2. use time sequence, contrast, list of related points (First, Second, Finally), etc. • 3. use linking words

Sentence Connectors • Connectors and sequence markers are words or phrases which show the relationship between ideas. • The main relationships are: Ø Time Ø Logic (cause, contrast, condition, comparison and concession) Ø Text (addition, summary, paraphrase, example and highlight).

LOGIC • • The main words and phrases that signal logical relationships are as follows: Cause: therefore/ accordingly/ consequently/ as a consequence/ as a result/ hence (formal)/ thus (formal)/ because of this/ that's why (informal)/ so Contrast: yet/ however/ nevertheless/ still/ but/ even so/ all the same (informal) Conditions: then/ in that case Comparison: similarly/ in the same way Concession: anyway/ at any rate Contradiction: in fact/ actually/ as a matter of fact/ indeed Alternation: instead/alternatively

TEXTUAL RELATIONSHIPS • • Addition: also/ in addition/ moreover/ furthermore/ besides/ too/ overall/ in brief/ in short Summary: to sum up/ then/ overall/ in brief/ in short Conclusion: in conclusion/ finally/ lastly/ to conclude Equivalence: in other words/ that means/ namely/ that is to say Inclusion: for example/ for instance/ say/ such as/ as follows (written)/ e. g. (formal and written) Highlight: in particular/ in detail/ especially/ notably/ chiefly/ mainly Generalization: usually/ normally/ as a rule/ in general/ for the most part/ in most cases/ on the whole Stating the obvious: obviously/ naturally/ of course

COHESION IN WRITING • There are two more ways of cohesion in writing. 1. a linking-back device - a way of relating to something that has previously been mentioned in the text in full. One of the commonest is that repeated nouns become pronouns. e. g. John's performance last year was above average. HE ("he" refers to John) achieved 20% higher results than average with existing customers.

COHESION IN WRITING • 2. repetition – there are two types of repetition – exact, when we repeat exactly the same words, and parallel repetition, when we use the most appropriate word(s) which best refers to the word in question. v Fluoridation is the deliberate addition of a chemical called fluoride to a town's water supplies, in order to reduce tooth decay. Fluoride occurs naturally in the drinking water of some towns…

4 Cs • Try to remember the 4 Cs when writing your paragraph/essay: • Clear – writing and expression of ideas (easy to read and understand) • Comprehensive - all the main ideas and arguments are included • Concise – short and precise (no unnecessary repetition) • Correct – accurate, both in content and in language use

KEY TO CORRECTION SYMBOLS Agreement of subject and verb, or adjective and noun e. g. The boy walk to school. /They are goods dogs. • A • N Number (Singular or Plural) e. g. It is one of the best hotel there. • T Tense e. g. The earth had an atmosphere around it. • Sp Spelling e. g. The library was pieceful and quite. • WO Word Order (Subject, Verb, Object, Manner, Place, Time) e. g. The earth is the planet third from the sun. /We went yesterday to the store.

KEY TO CORRECTION SYMBOLS • F (VF) Grammatical form of the word (verb, etc) e. g. I was interesting in that book. / The man ran slow. / They studies science in the morning. • WW Wrong Word e. g. Don't do the plans for tomorrow. / He raised suddenly to his feet. • P Punctuation e. g. bring the book on Monday / I am studying Economics at the university of belgrade / he was very tired therefore he went to bed • X Unnecessary Word e. g. Good grades they are hard to get. / The earth it is the third planet from the sun.

KEY TO CORRECTION SYMBOLS • Reference e. g. John brought her to their house. It is beautiful. • /? / Sentence is too complicated, unclear or incomplete. • // Parallelism e. g. It is important to study and sleeping enough. • / Wrong Joining e. g. I go to the university everyday. • Wrong Separation e. g. I like to eat every thing.

KEY TO CORRECTION SYMBOLS • Missing Word (article, preposition, etc) e. g. We listen music when we feel like it. /We went to hotel on Fifth Avenue. • Wph Wrong phrase, wrong way to say this. e. g. We shall study the part played by the appropriate monetary institutions in securing the capital needed. • Log Illogical e. g. Glass is breakable. Thus, it is usually painted blue. • No Untruth e. g. A franchisee receives the royalty fee from a franchiser. • SC Sentence Construction (grammatically wrong, a number of grammatical problems within the sentence).

Essay writing an essay is a short piece