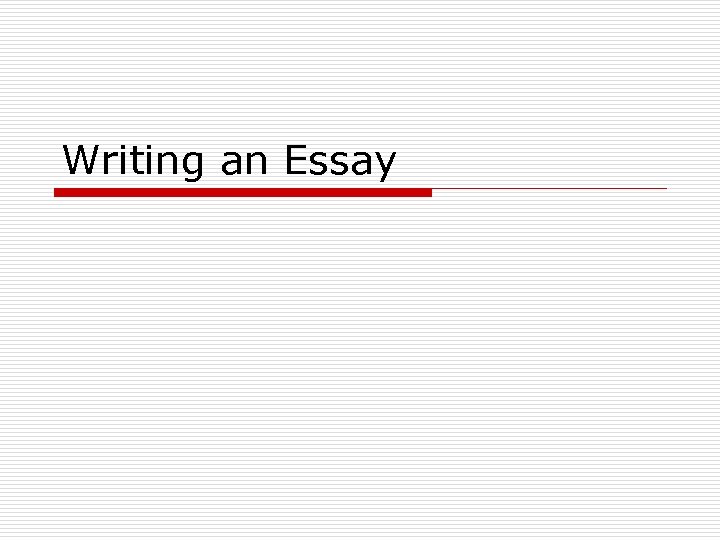 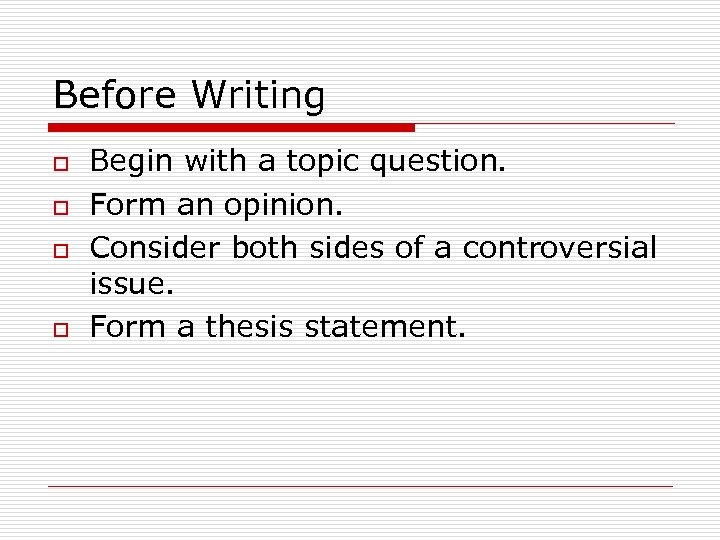 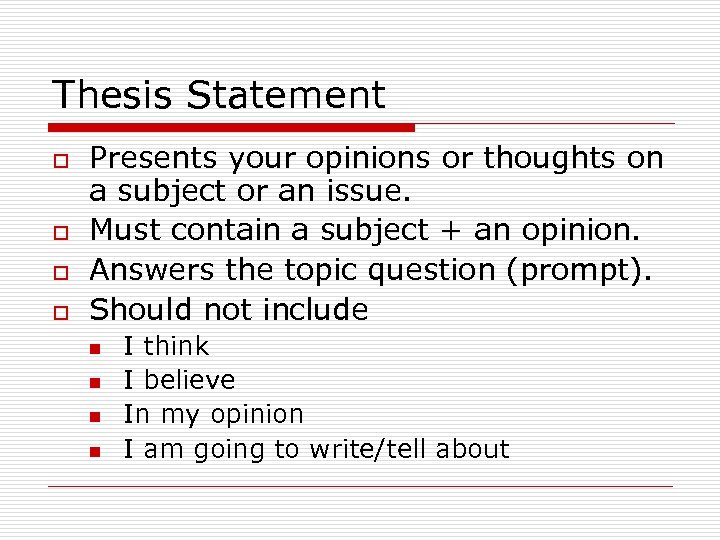 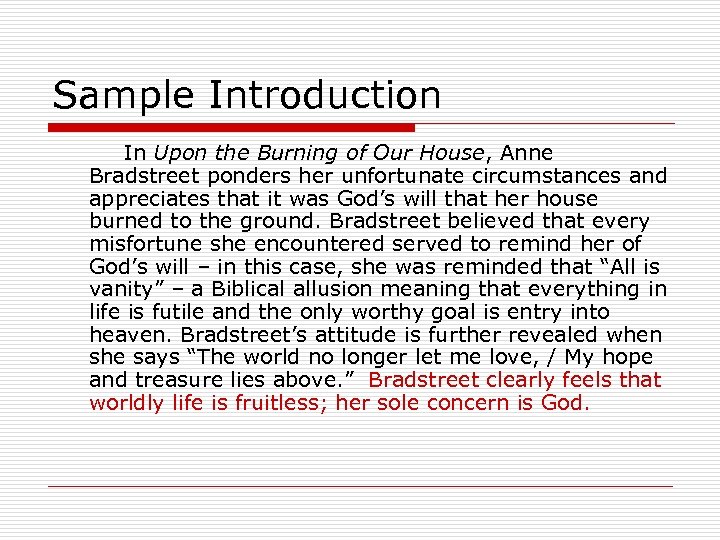 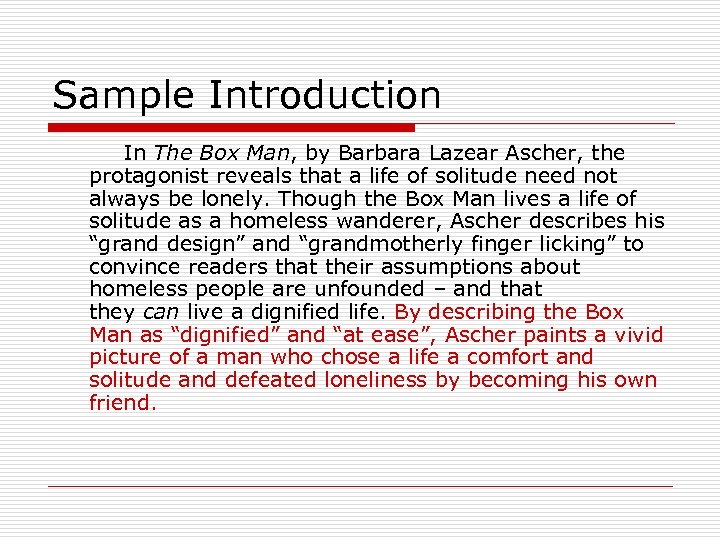 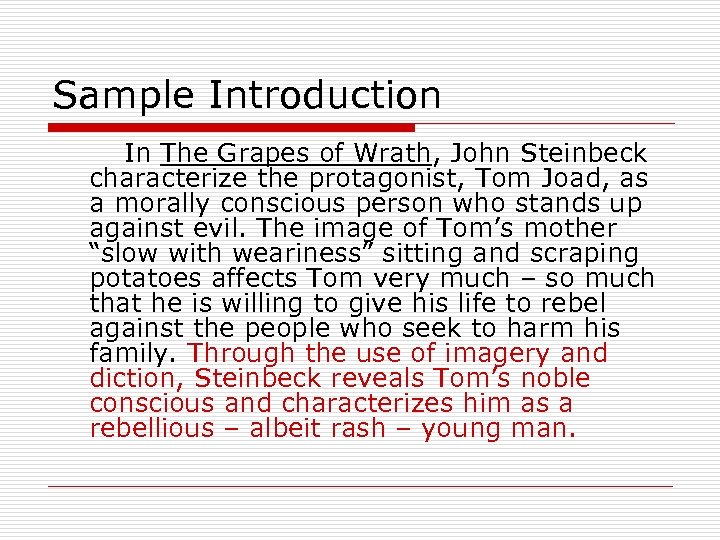 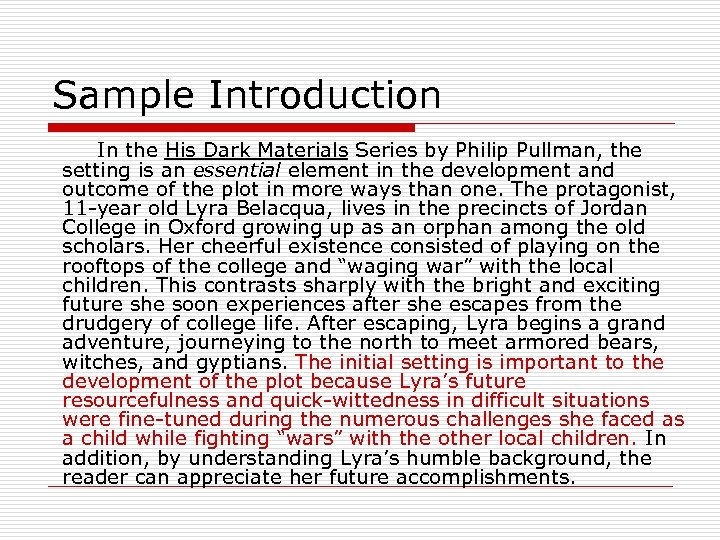 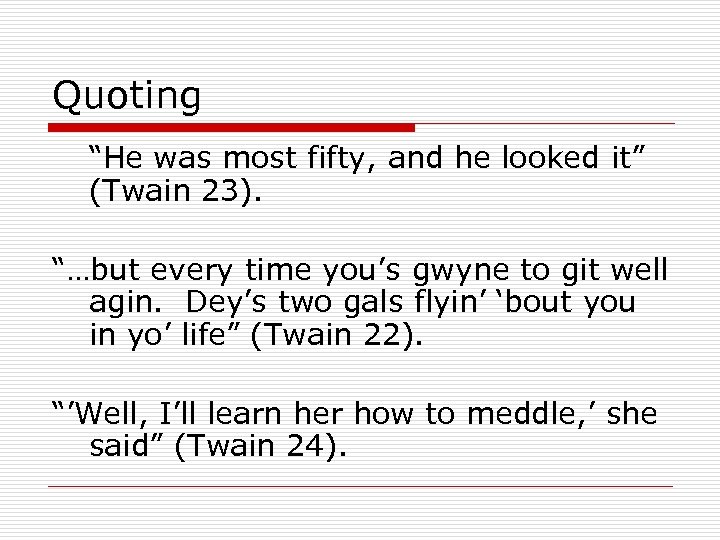 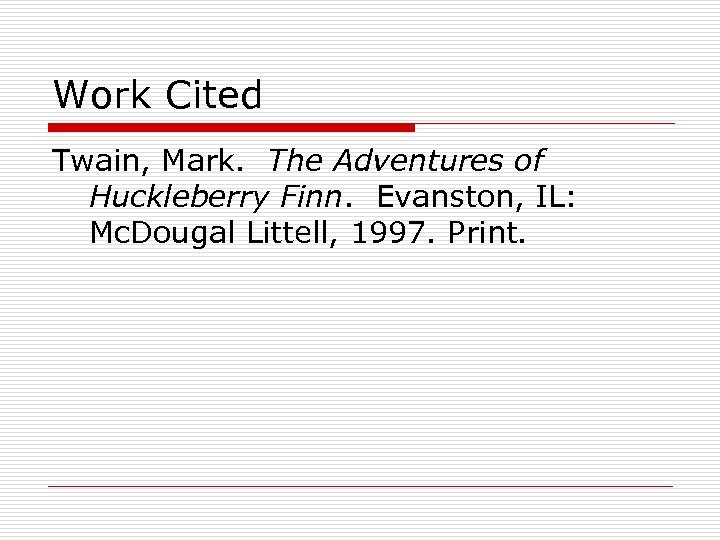 Before Writing o o Begin with a topic question. Form an opinion. Consider both sides of a controversial issue. Form a thesis statement.

Thesis Statement o o Presents your opinions or thoughts on a subject or an issue. Must contain a subject + an opinion. Answers the topic question (prompt). Should not include n n I think I believe In my opinion I am going to write/tell about

Thesis Statement o o is a road map for the paper; in other words, it tells the reader what to expect from the rest of the paper. directly answers the question asked of you. A thesis is an interpretation of a question or subject, not the subject itself. makes a claim that others might dispute. is usually a single sentence somewhere in your first paragraph that presents your argument to the reader.

Sample Introduction In Upon the Burning of Our House, Anne Bradstreet ponders her unfortunate circumstances and appreciates that it was God’s will that her house burned to the ground. Bradstreet believed that every misfortune she encountered served to remind her of God’s will – in this case, she was reminded that “All is vanity” – a Biblical allusion meaning that everything in life is futile and the only worthy goal is entry into heaven. Bradstreet’s attitude is further revealed when she says “The world no longer let me love, / My hope and treasure lies above. ” Bradstreet clearly feels that worldly life is fruitless; her sole concern is God.

Sample Introduction In The Box Man, by Barbara Lazear Ascher, the protagonist reveals that a life of solitude need not always be lonely. Though the Box Man lives a life of solitude as a homeless wanderer, Ascher describes his “grand design” and “grandmotherly finger licking” to convince readers that their assumptions about homeless people are unfounded – and that they can live a dignified life. By describing the Box Man as “dignified” and “at ease”, Ascher paints a vivid picture of a man who chose a life a comfort and solitude and defeated loneliness by becoming his own friend.

Sample Introduction In The Grapes of Wrath, John Steinbeck characterize the protagonist, Tom Joad, as a morally conscious person who stands up against evil. The image of Tom’s mother “slow with weariness” sitting and scraping potatoes affects Tom very much – so much that he is willing to give his life to rebel against the people who seek to harm his family. Through the use of imagery and diction, Steinbeck reveals Tom’s noble conscious and characterizes him as a rebellious – albeit rash – young man.

Sample Introduction In the His Dark Materials Series by Philip Pullman, the setting is an essential element in the development and outcome of the plot in more ways than one. The protagonist, 11 -year old Lyra Belacqua, lives in the precincts of Jordan College in Oxford growing up as an orphan among the old scholars. Her cheerful existence consisted of playing on the rooftops of the college and “waging war” with the local children. This contrasts sharply with the bright and exciting future she soon experiences after she escapes from the drudgery of college life. After escaping, Lyra begins a grand adventure, journeying to the north to meet armored bears, witches, and gyptians. The initial setting is important to the development of the plot because Lyra’s future resourcefulness and quick-wittedness in difficult situations were fine-tuned during the numerous challenges she faced as a child while fighting “wars” with the other local children. In addition, by understanding Lyra’s humble background, the reader can appreciate her future accomplishments.

ACADEMIC WRITING Part 2 What we shall