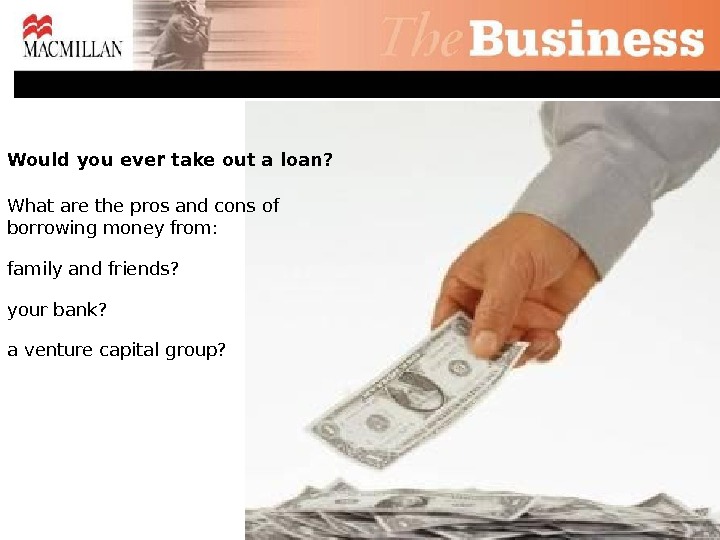 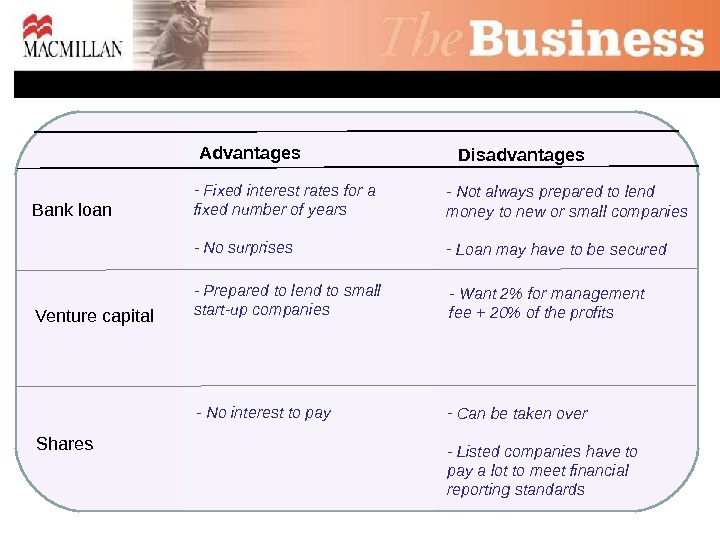 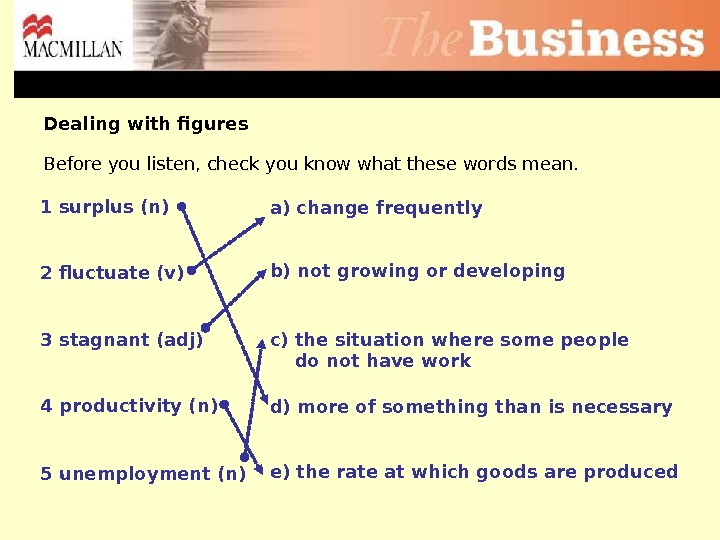 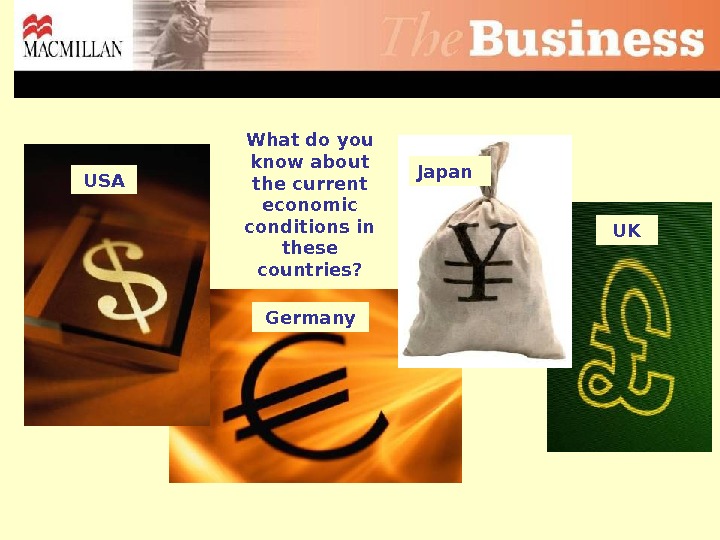 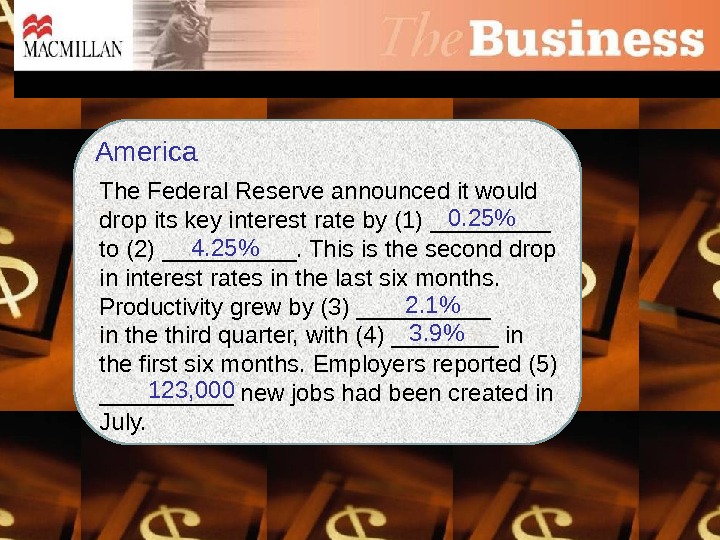 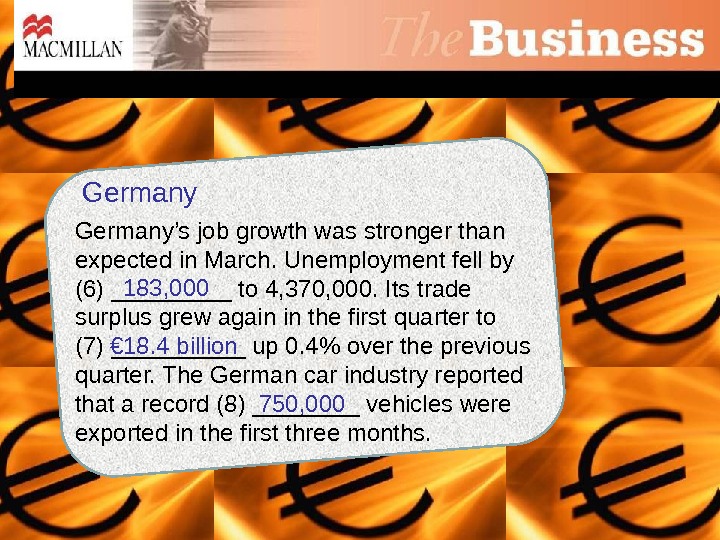 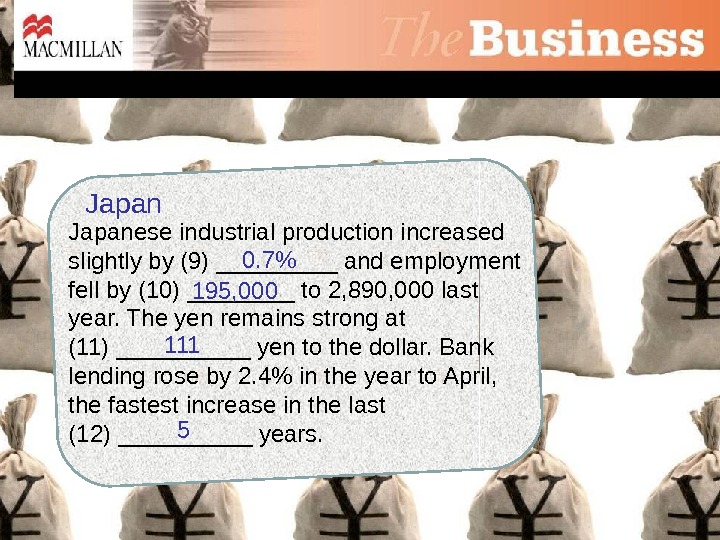 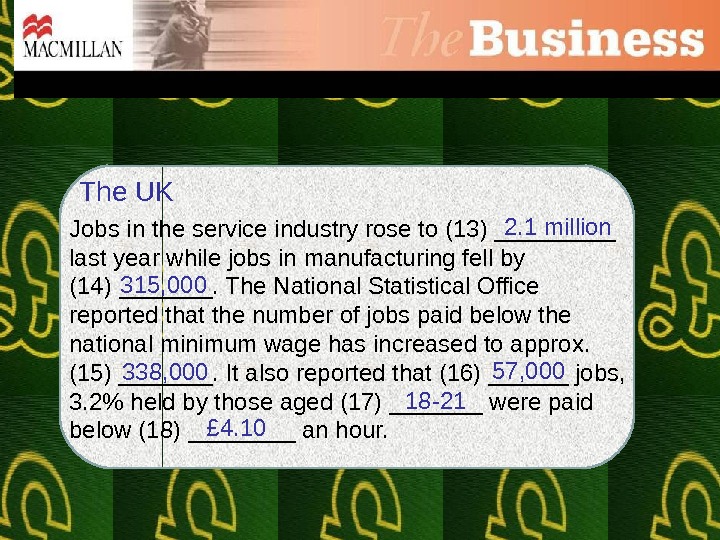 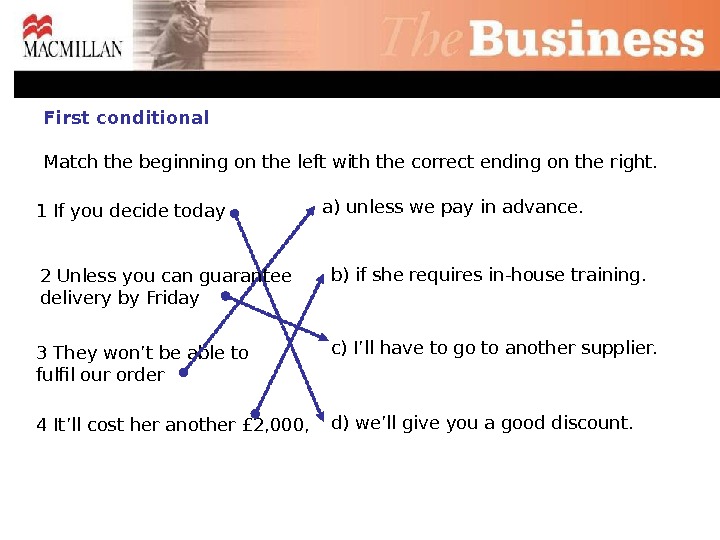 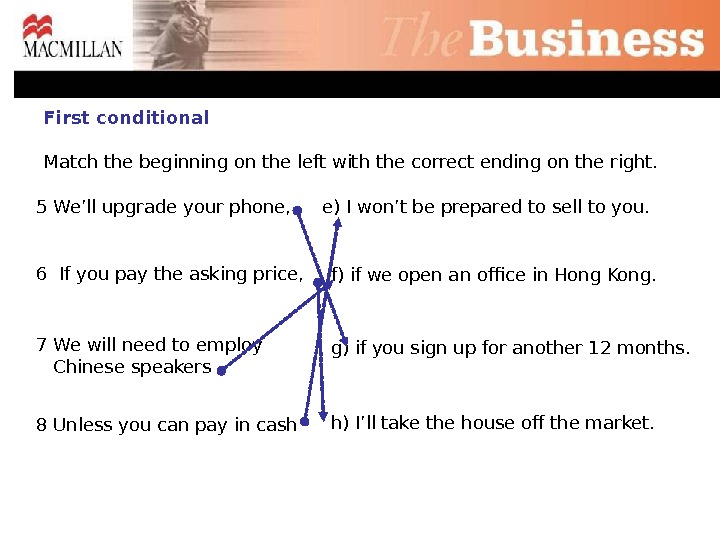 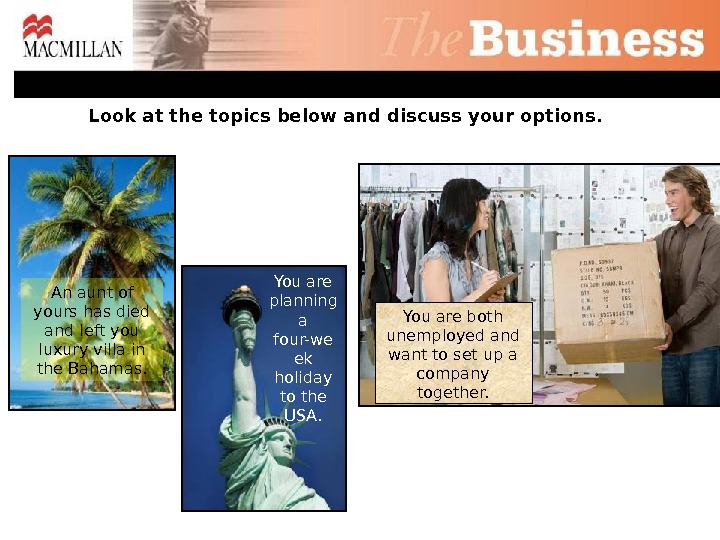 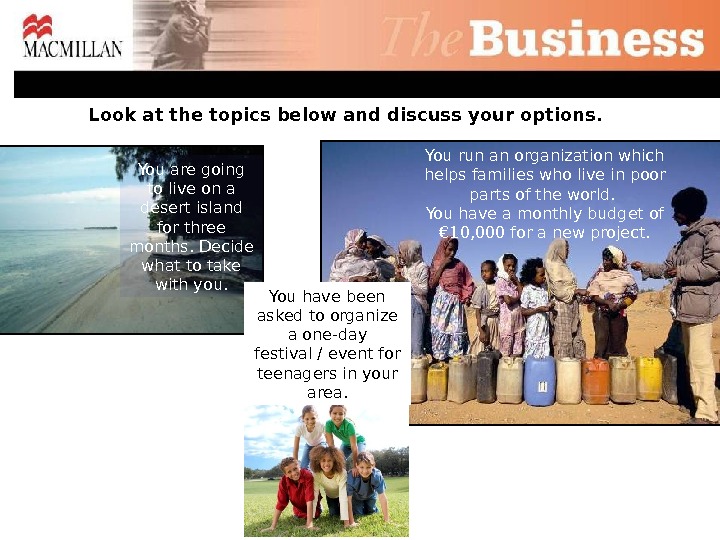 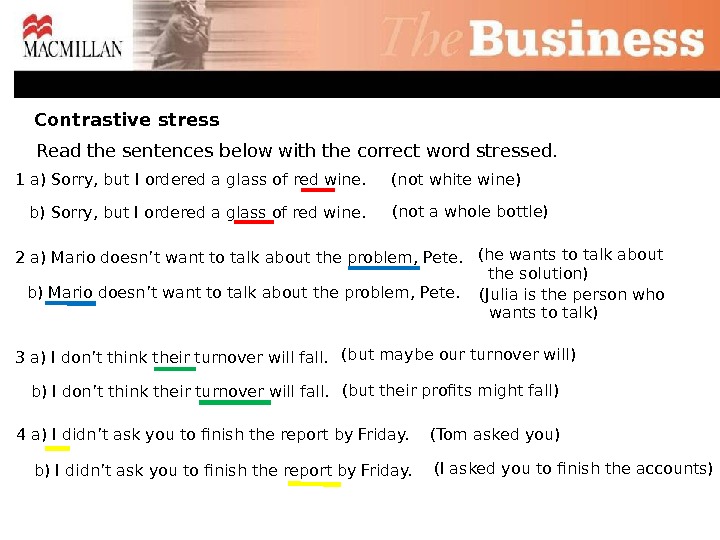 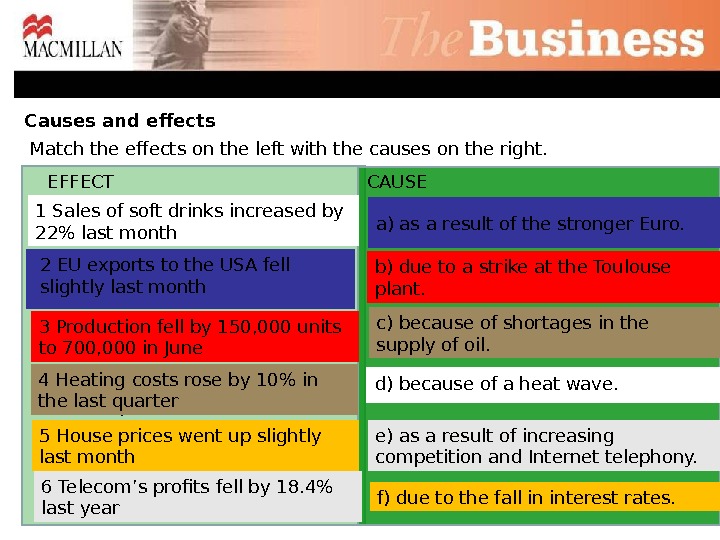 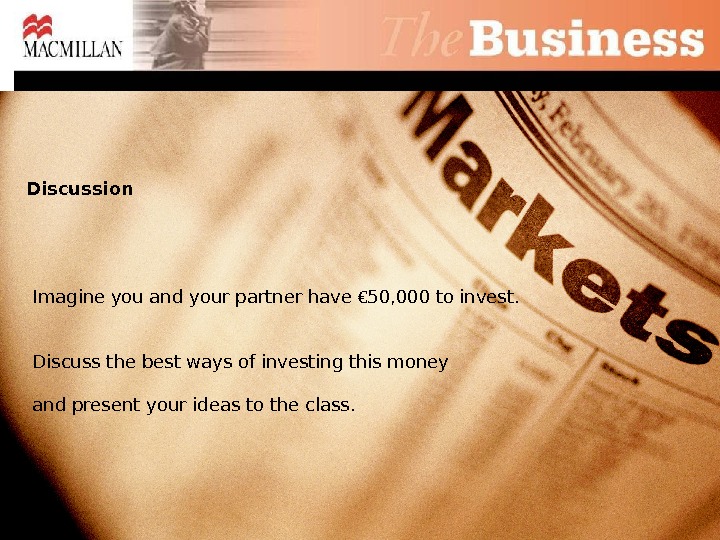 Скачать презентацию Would you ever take out a loan? What

Описание презентации Would you ever take out a loan? What по слайдам

Would you ever take out a loan? What are the pros and cons of borrowing money from: family and friends? your bank? a venture capital group?

b) not growing or developing 2 fluctuate (v) 3 stagnant (adj) 4 productivity (n) 5 unemployment (n) Before you listen, check you know what these words mean. a) change frequently 1 surplus (n) c) the situation where some people do not have work d) more of something than is necessary e) the rate at which goods are produced. Dealing with figures

Germany UKUSA Japan. What do you know about the current economic conditions in these countries?

First conditional Match the beginning on the left with the correct ending on the right. a) unless we pay in advance. 1 If you decide today 3 They won’t be able to fulfil our order 4 It’ll cost her another £ 2, 000, b) if she requires in-house training. c) I’ll have to go to another supplier. d) we’ll give you a good discount. 2 Unless you can guarantee delivery by Friday

First conditional Match the beginning on the left with the correct ending on the right. e) I won’t be prepared to sell to you. 6 If you pay the asking price, 5 We’ll upgrade your phone, 7 We will need to employ Chinese speakers 8 Unless you can pay in cash f) if we open an office in Hong Kong. g) if you sign up for another 12 months. h) I’ll take the house off the market.

Look at the topics below and discuss your options. An aunt of yours has died and left you luxury villa in the Bahamas. You are planning a four-we ek holiday to the USA. You are both unemployed and want to set up a company together.

Look at the topics below and discuss your options. You run an organization which helps families who live in poor parts of the world. You have a monthly budget of € 10, 000 for a new project. You are going to live on a desert island for three months. Decide what to take with you. You have been asked to organize a one-day festival / event for teenagers in your area.

Discussion Imagine you and your partner have € 50, 000 to invest. Discuss the best ways of investing this money and present your ideas to the class.