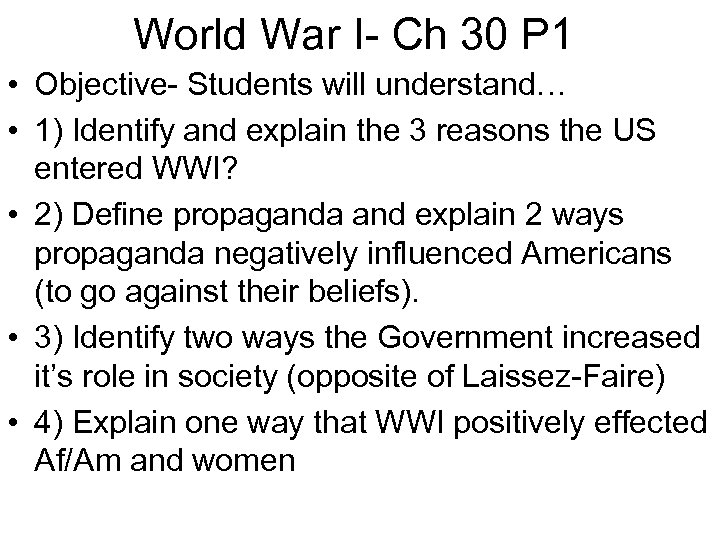 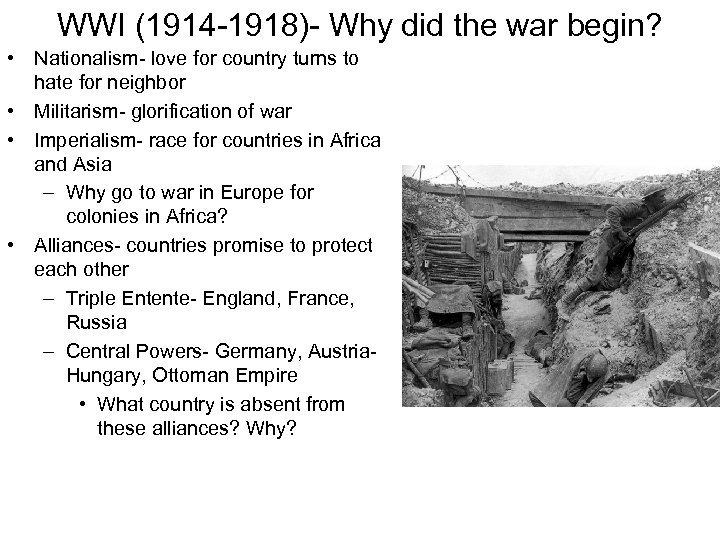 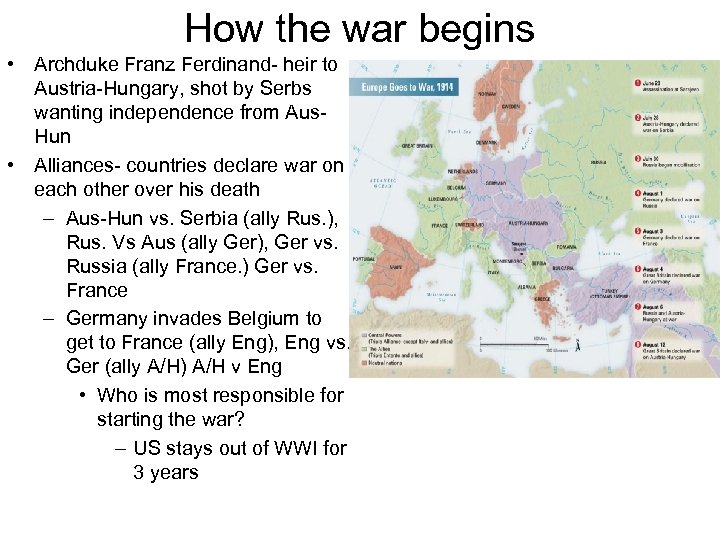 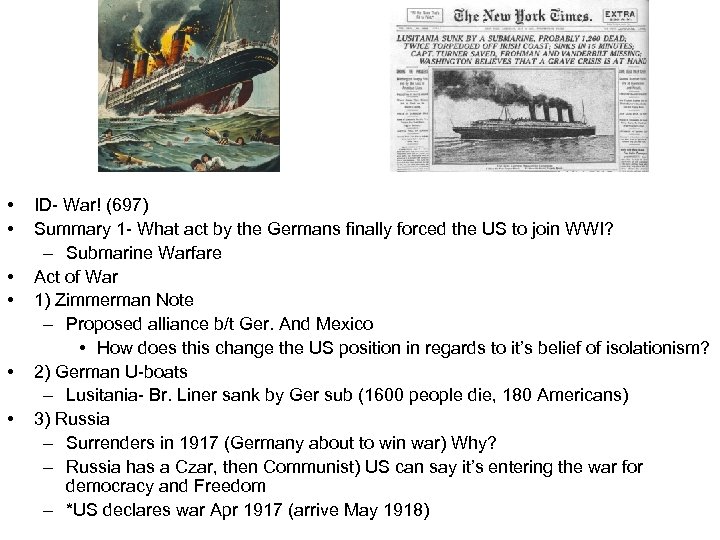 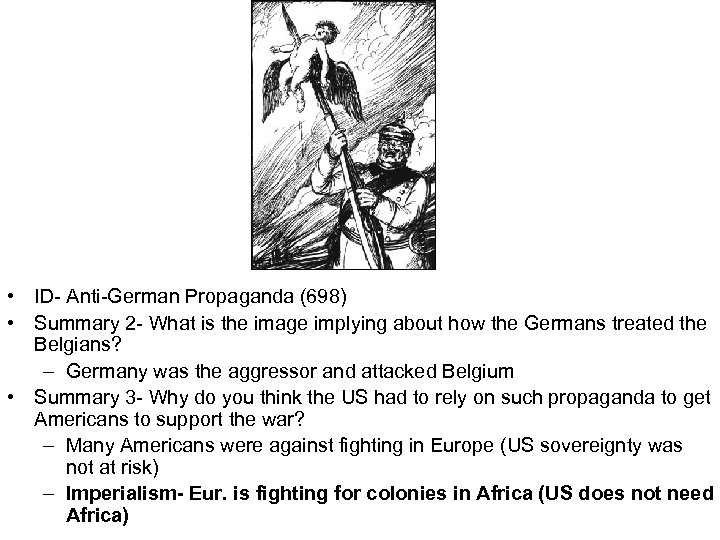 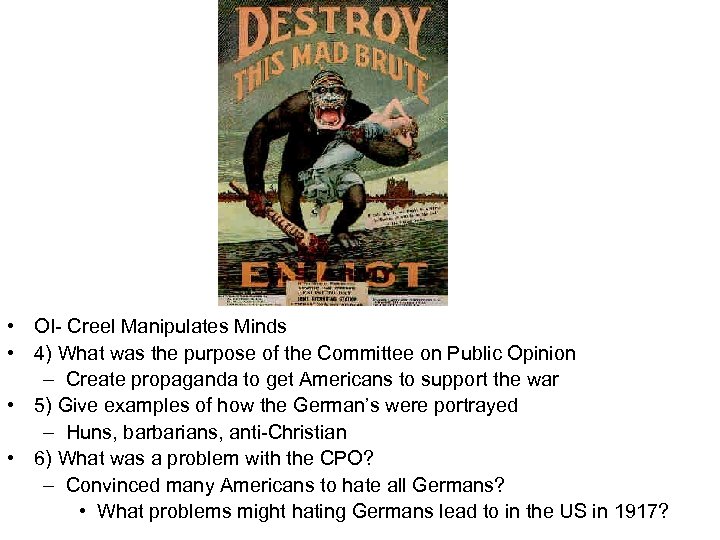 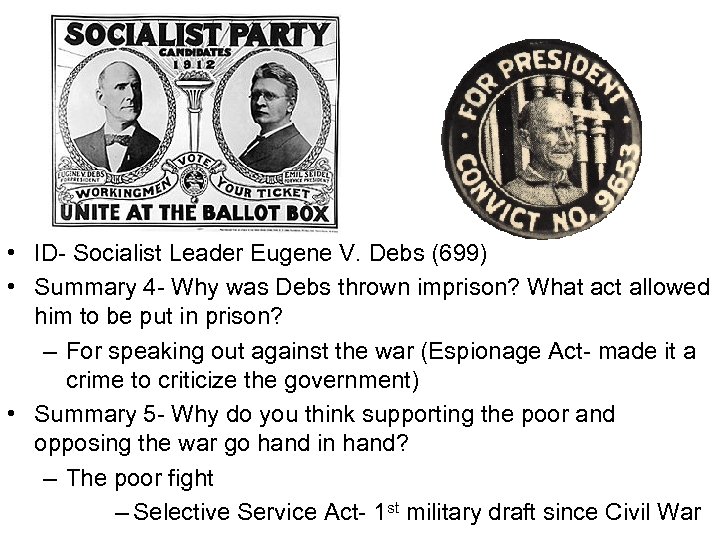 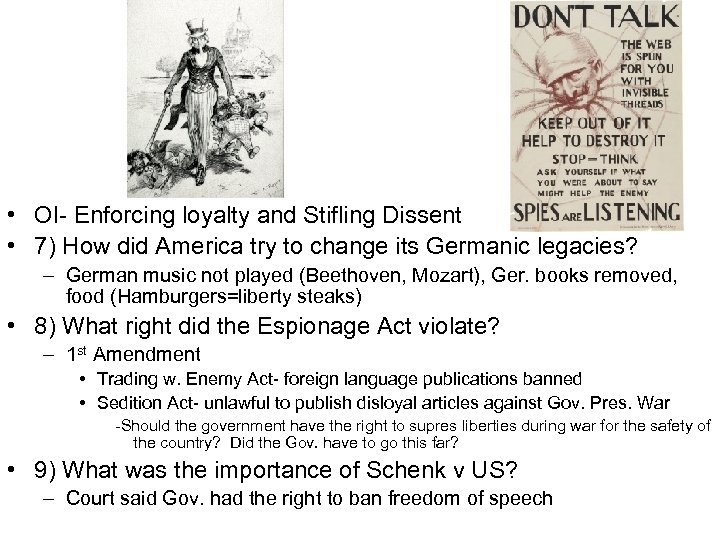 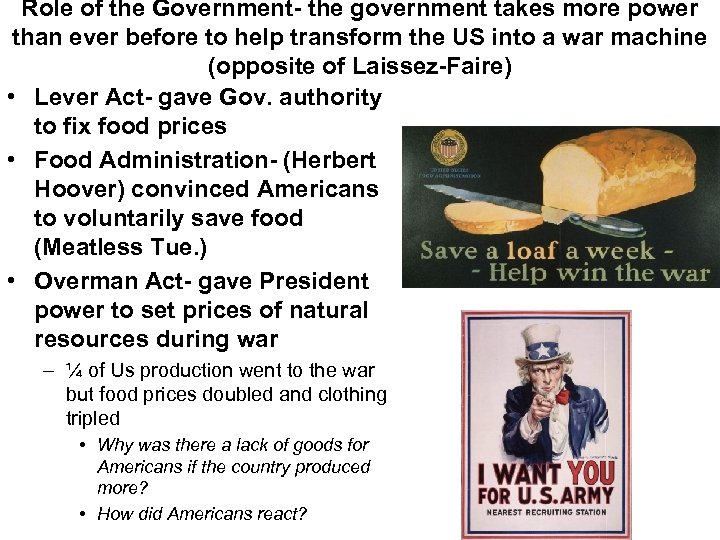 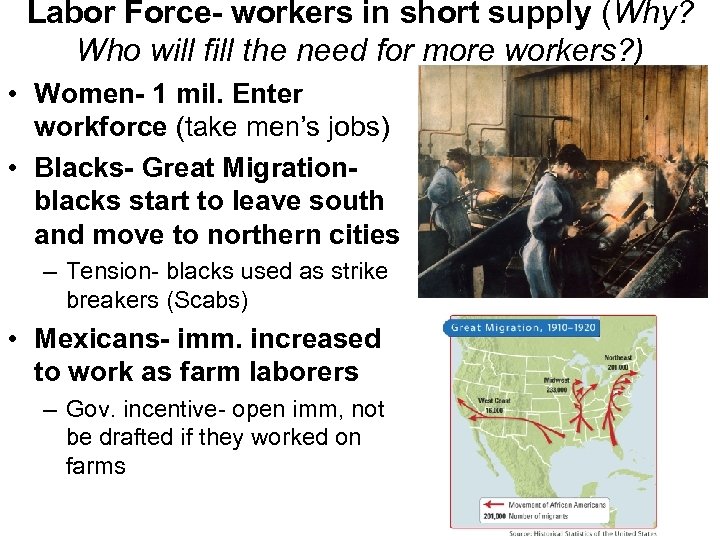 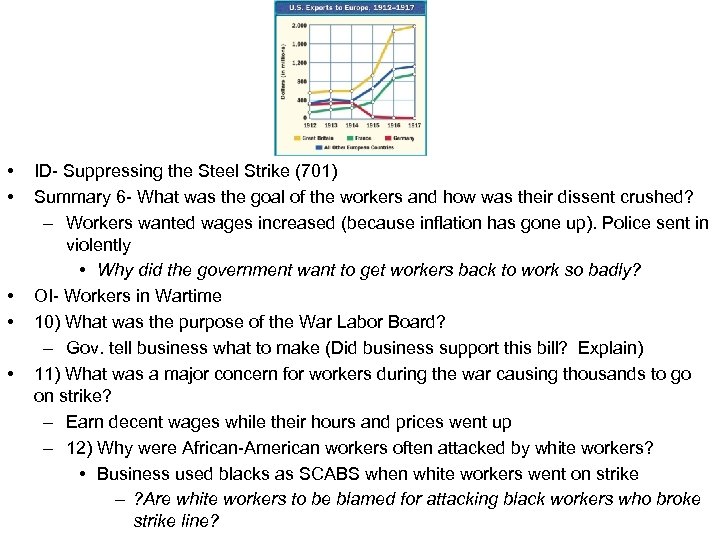 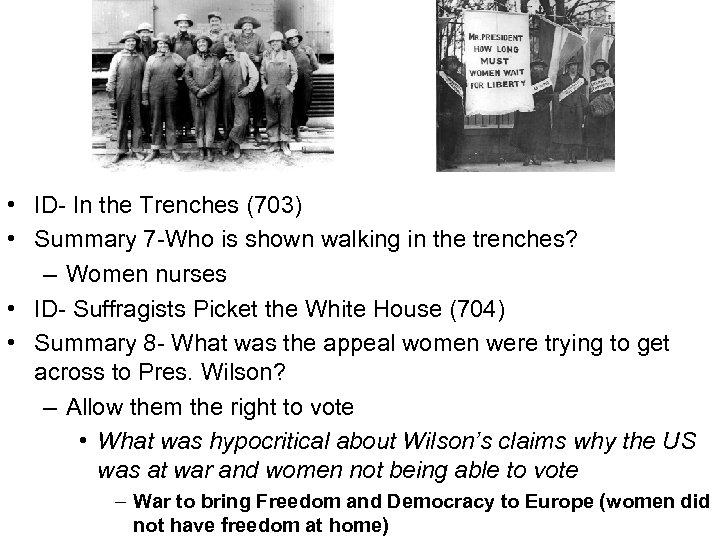 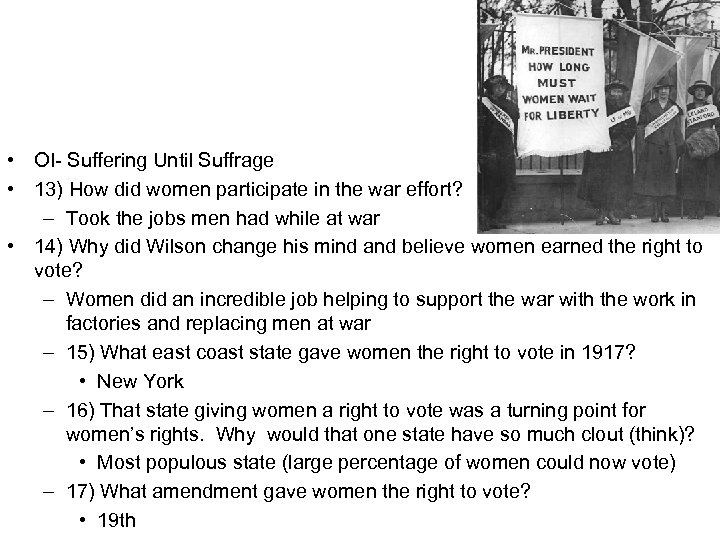 World War I- Ch 30 P 1 • Objective- Students will understand… • 1) Identify and explain the 3 reasons the US entered WWI? • 2) Define propaganda and explain 2 ways propaganda negatively influenced Americans (to go against their beliefs). • 3) Identify two ways the Government increased it’s role in society (opposite of Laissez-Faire) • 4) Explain one way that WWI positively effected Af/Am and women

WWI (1914 -1918)- Why did the war begin? • Nationalism- love for country turns to hate for neighbor • Militarism- glorification of war • Imperialism- race for countries in Africa and Asia – Why go to war in Europe for colonies in Africa? • Alliances- countries promise to protect each other – Triple Entente- England, France, Russia – Central Powers- Germany, Austria. Hungary, Ottoman Empire • What country is absent from these alliances? Why?

How the war begins • Archduke Franz Ferdinand- heir to Austria-Hungary, shot by Serbs wanting independence from Aus. Hun • Alliances- countries declare war on each other over his death – Aus-Hun vs. Serbia (ally Rus. ), Rus. Vs Aus (ally Ger), Ger vs. Russia (ally France. ) Ger vs. France – Germany invades Belgium to get to France (ally Eng), Eng vs. Ger (ally A/H) A/H v Eng • Who is most responsible for starting the war? – US stays out of WWI for 3 years

• ID- Anti-German Propaganda (698) • Summary 2 - What is the image implying about how the Germans treated the Belgians? – Germany was the aggressor and attacked Belgium • Summary 3 - Why do you think the US had to rely on such propaganda to get Americans to support the war? – Many Americans were against fighting in Europe (US sovereignty was not at risk) – Imperialism- Eur. is fighting for colonies in Africa (US does not need Africa)

• OI- Creel Manipulates Minds • 4) What was the purpose of the Committee on Public Opinion – Create propaganda to get Americans to support the war • 5) Give examples of how the German’s were portrayed – Huns, barbarians, anti-Christian • 6) What was a problem with the CPO? – Convinced many Americans to hate all Germans? • What problems might hating Germans lead to in the US in 1917?

• ID- Socialist Leader Eugene V. Debs (699) • Summary 4 - Why was Debs thrown imprison? What act allowed him to be put in prison? – For speaking out against the war (Espionage Act- made it a crime to criticize the government) • Summary 5 - Why do you think supporting the poor and opposing the war go hand in hand? – The poor fight – Selective Service Act- 1 st military draft since Civil War

• OI- Enforcing loyalty and Stifling Dissent • 7) How did America try to change its Germanic legacies? – German music not played (Beethoven, Mozart), Ger. books removed, food (Hamburgers=liberty steaks) • 8) What right did the Espionage Act violate? – 1 st Amendment • Trading w. Enemy Act- foreign language publications banned • Sedition Act- unlawful to publish disloyal articles against Gov. Pres. War -Should the government have the right to supres liberties during war for the safety of the country? Did the Gov. have to go this far? • 9) What was the importance of Schenk v US? – Court said Gov. had the right to ban freedom of speech

Role of the Government- the government takes more power than ever before to help transform the US into a war machine (opposite of Laissez-Faire) • Lever Act- gave Gov. authority to fix food prices • Food Administration- (Herbert Hoover) convinced Americans to voluntarily save food (Meatless Tue. ) • Overman Act- gave President power to set prices of natural resources during war – ¼ of Us production went to the war but food prices doubled and clothing tripled • Why was there a lack of goods for Americans if the country produced more? • How did Americans react?

• • • ID- Suppressing the Steel Strike (701) Summary 6 - What was the goal of the workers and how was their dissent crushed? – Workers wanted wages increased (because inflation has gone up). Police sent in violently • Why did the government want to get workers back to work so badly? OI- Workers in Wartime 10) What was the purpose of the War Labor Board? – Gov. tell business what to make (Did business support this bill? Explain) 11) What was a major concern for workers during the war causing thousands to go on strike? – Earn decent wages while their hours and prices went up – 12) Why were African-American workers often attacked by white workers? • Business used blacks as SCABS when white workers went on strike – ? Are white workers to be blamed for attacking black workers who broke strike line?

• ID- In the Trenches (703) • Summary 7 -Who is shown walking in the trenches? – Women nurses • ID- Suffragists Picket the White House (704) • Summary 8 - What was the appeal women were trying to get across to Pres. Wilson? – Allow them the right to vote • What was hypocritical about Wilson’s claims why the US was at war and women not being able to vote – War to bring Freedom and Democracy to Europe (women did not have freedom at home)

• OI- Suffering Until Suffrage • 13) How did women participate in the war effort? – Took the jobs men had while at war • 14) Why did Wilson change his mind and believe women earned the right to vote? – Women did an incredible job helping to support the war with the work in factories and replacing men at war – 15) What east coast state gave women the right to vote in 1917? • New York – 16) That state giving women a right to vote was a turning point for women’s rights. Why would that one state have so much clout (think)? • Most populous state (large percentage of women could now vote) – 17) What amendment gave women the right to vote? • 19 th