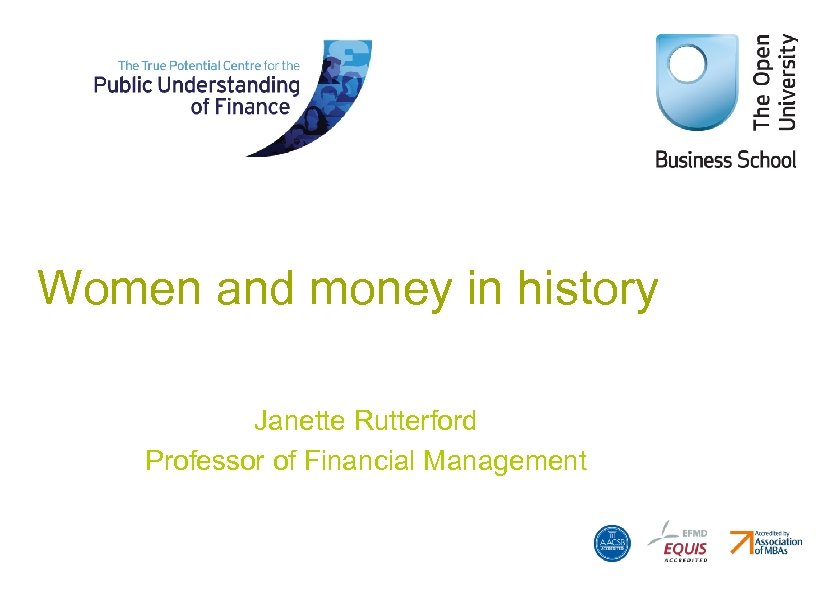 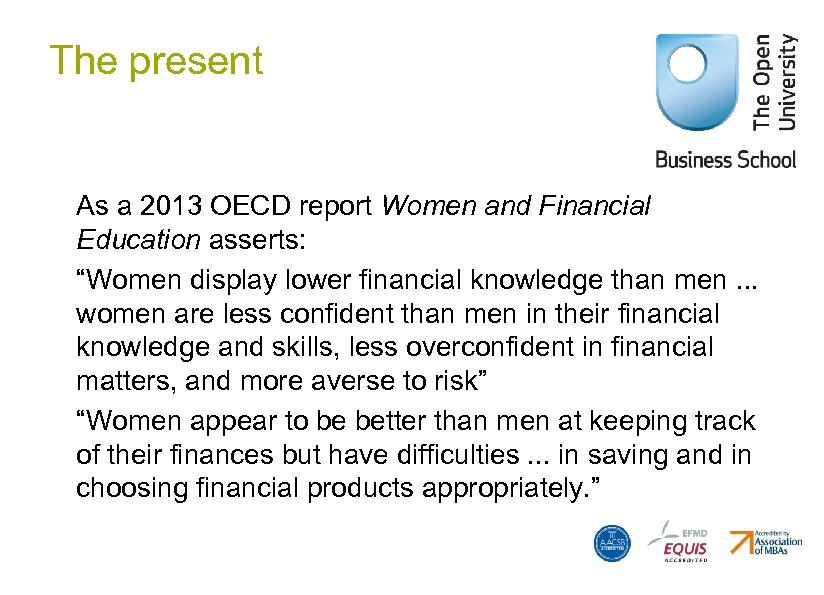 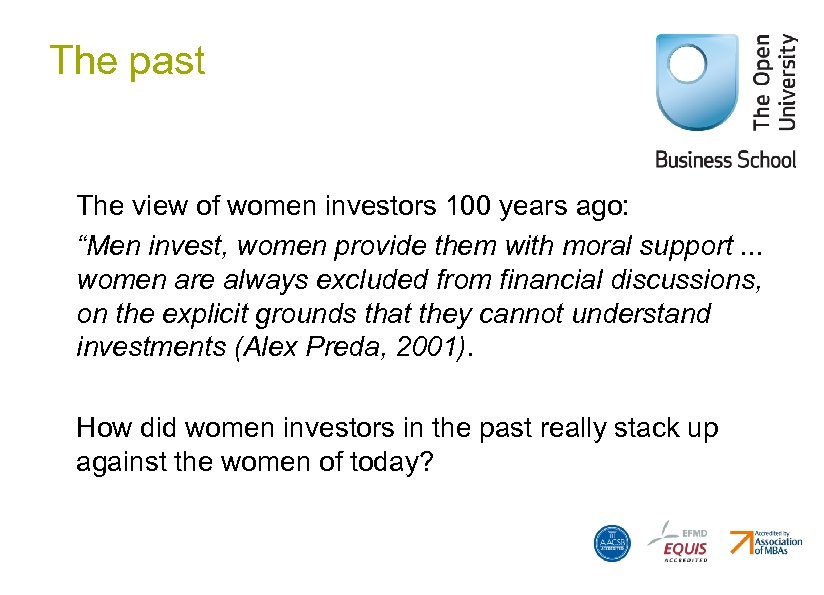 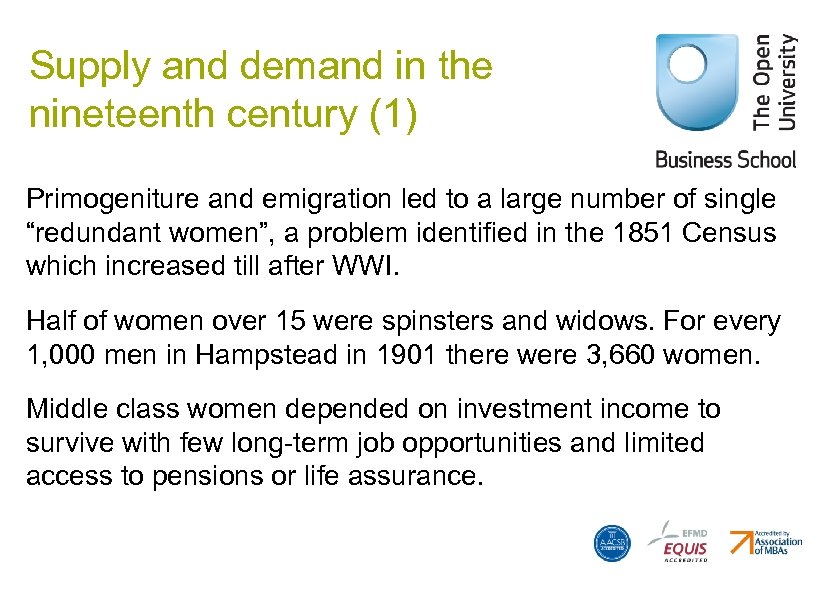 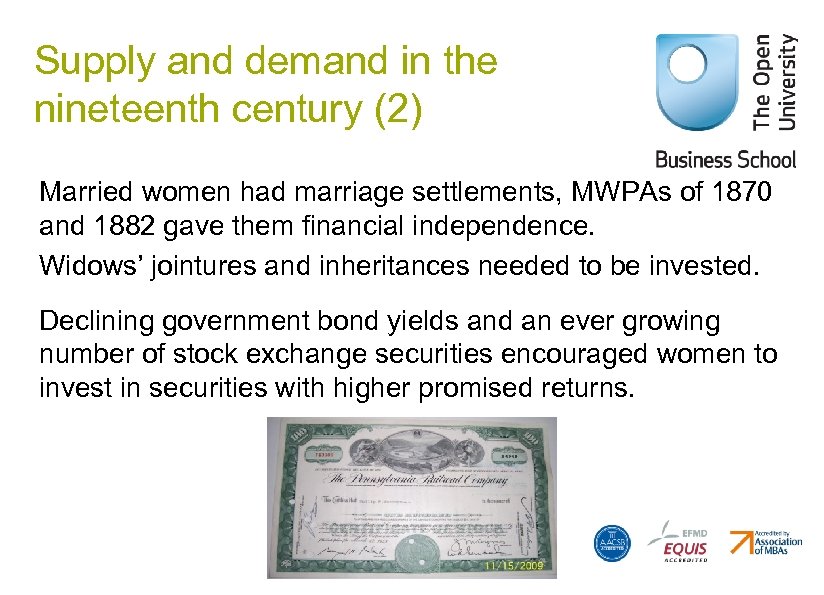 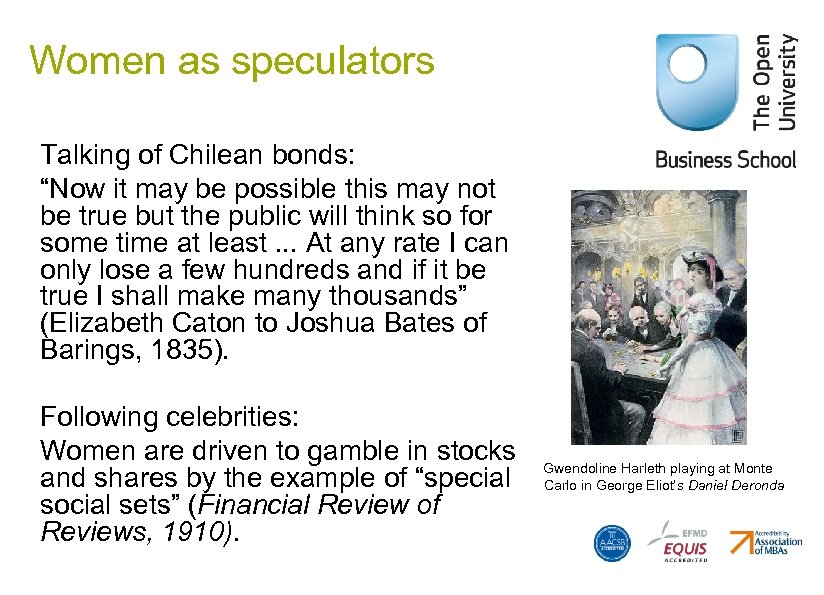 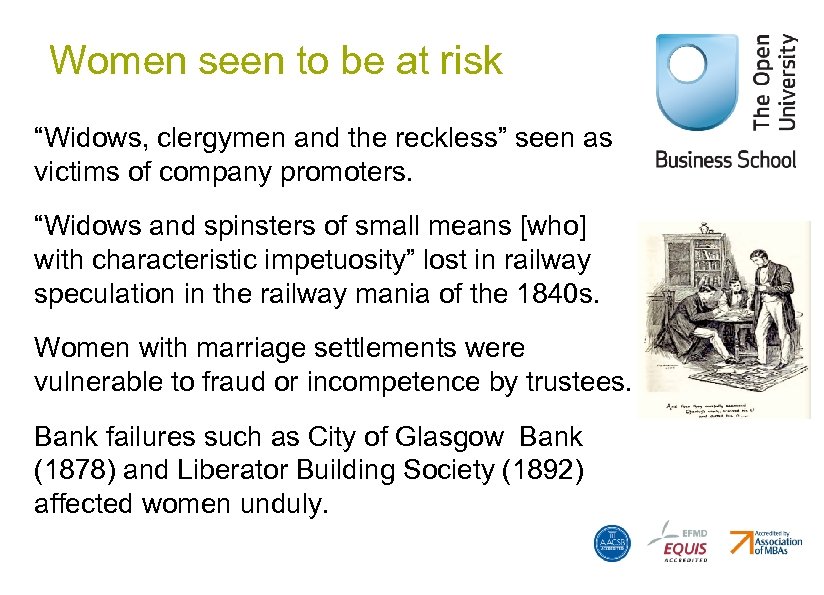 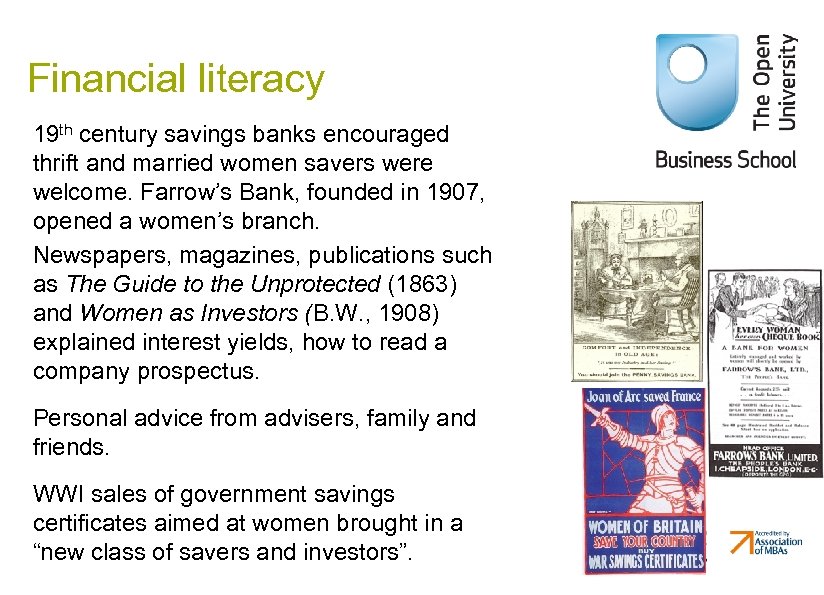 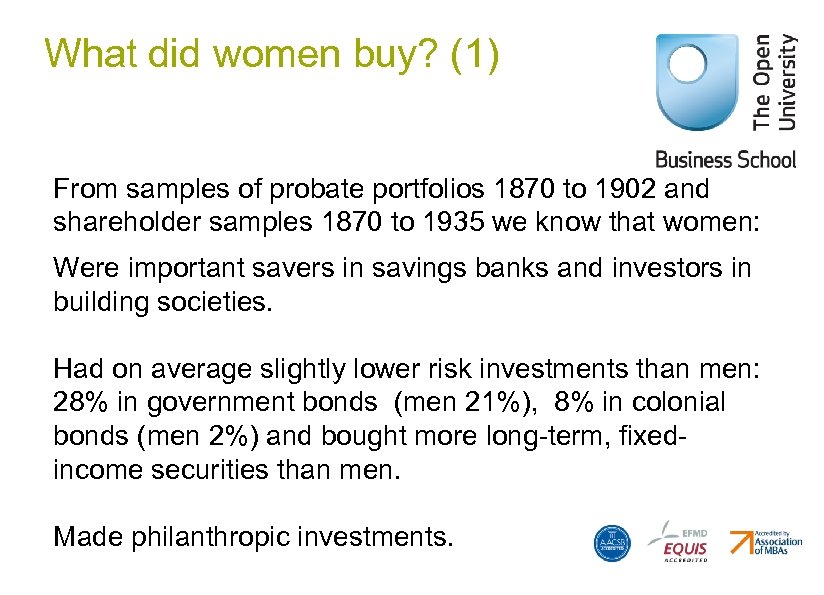 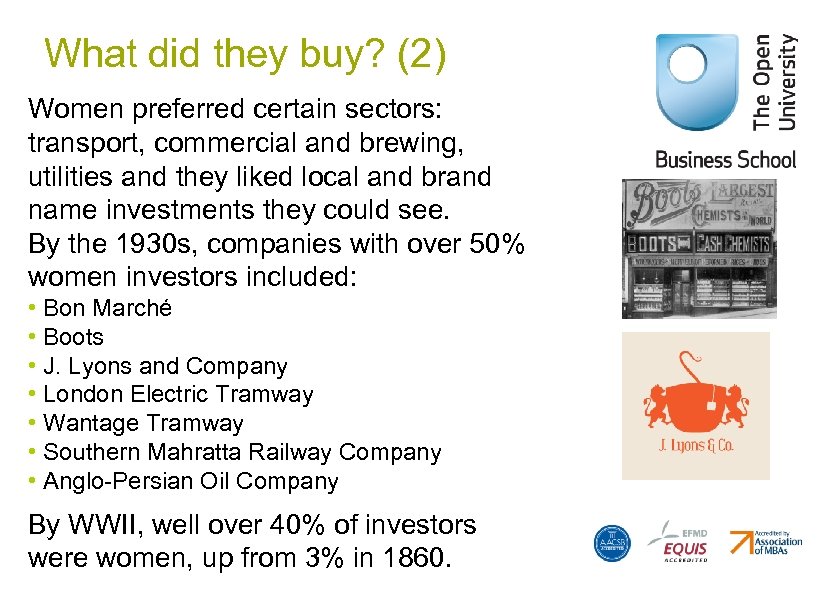 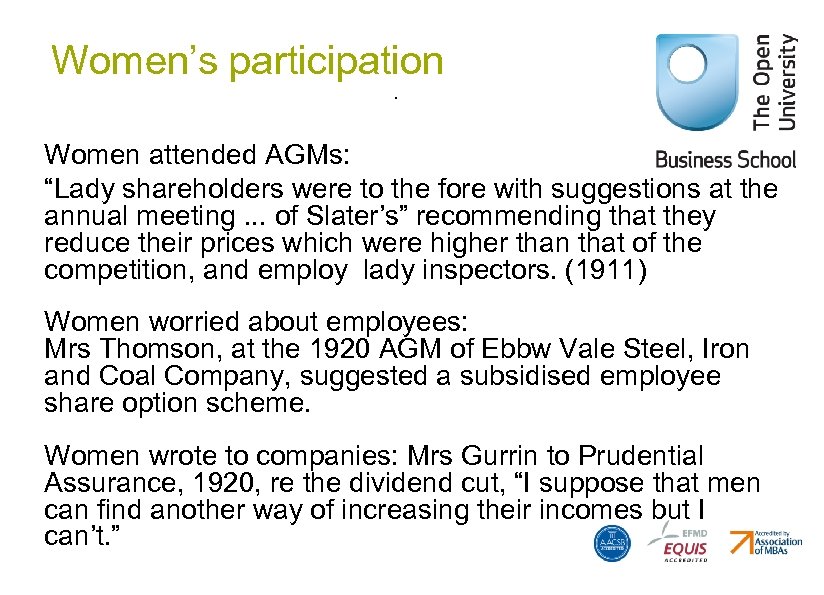 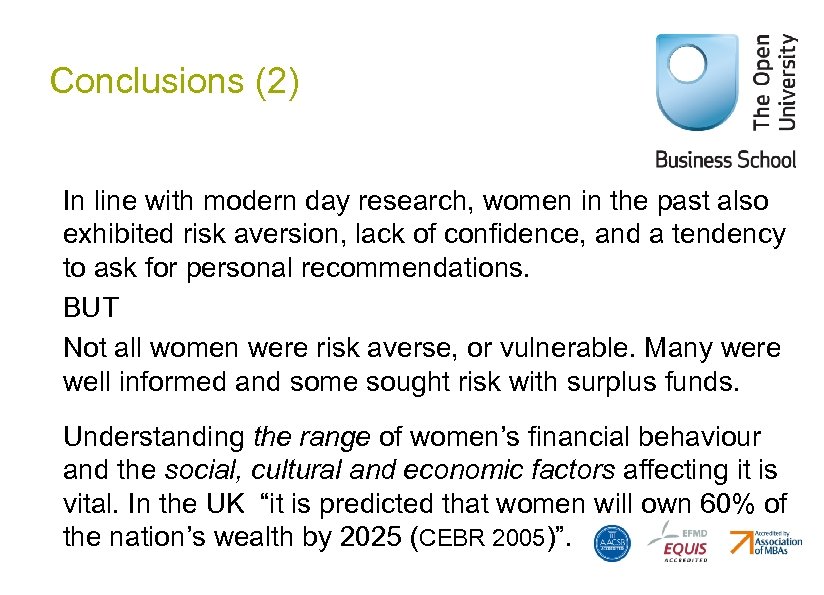 The past The view of women investors 100 years ago: “Men invest, women provide them with moral support. . . women are always excluded from financial discussions, on the explicit grounds that they cannot understand investments (Alex Preda, 2001). How did women investors in the past really stack up against the women of today?

Supply and demand in the nineteenth century (1) Primogeniture and emigration led to a large number of single “redundant women”, a problem identified in the 1851 Census which increased till after WWI. Half of women over 15 were spinsters and widows. For every 1, 000 men in Hampstead in 1901 there were 3, 660 women. Middle class women depended on investment income to survive with few long-term job opportunities and limited access to pensions or life assurance.

Supply and demand in the nineteenth century (2) Married women had marriage settlements, MWPAs of 1870 and 1882 gave them financial independence. Widows’ jointures and inheritances needed to be invested. Declining government bond yields and an ever growing number of stock exchange securities encouraged women to invest in securities with higher promised returns.

Women as speculators Talking of Chilean bonds: “Now it may be possible this may not be true but the public will think so for some time at least. . . At any rate I can only lose a few hundreds and if it be true I shall make many thousands” (Elizabeth Caton to Joshua Bates of Barings, 1835). Following celebrities: Women are driven to gamble in stocks and shares by the example of “special social sets” (Financial Review of Reviews, 1910). Gwendoline Harleth playing at Monte Carlo in George Eliot’s Daniel Deronda

Women seen to be at risk “Widows, clergymen and the reckless” seen as victims of company promoters. “Widows and spinsters of small means [who] with characteristic impetuosity” lost in railway speculation in the railway mania of the 1840 s. Women with marriage settlements were vulnerable to fraud or incompetence by trustees. Bank failures such as City of Glasgow Bank (1878) and Liberator Building Society (1892) affected women unduly.

Financial literacy 19 th century savings banks encouraged thrift and married women savers were welcome. Farrow’s Bank, founded in 1907, opened a women’s branch. Newspapers, magazines, publications such as The Guide to the Unprotected (1863) and Women as Investors (B. W. , 1908) explained interest yields, how to read a company prospectus. Personal advice from advisers, family and friends. WWI sales of government savings certificates aimed at women brought in a “new class of savers and investors”.

Women and risk aversion, lack of confidence, income seeking, need for personal advice “I have taken fright and sold my Russians, & now I do not know how to employ the proceeds to the best advantage. Some time ago you spoke of L. C. & D. Railway Debentures. Do you recommend them in preference to other lines? Some of the Indian Government £ 4% and 4 ½% Stock is as low as 80 & 82. But perhaps that means that it is not thought very secure. I think I have heard that Insurance Companies are good investments. Do you know anything about the prospects of the Midland Railway? Can you recommend a reliable broker? ” Miss Langton to Mr Bosworth, 1877

What did women buy? (1) From samples of probate portfolios 1870 to 1902 and shareholder samples 1870 to 1935 we know that women: Were important savers in savings banks and investors in building societies. Had on average slightly lower risk investments than men: 28% in government bonds (men 21%), 8% in colonial bonds (men 2%) and bought more long-term, fixedincome securities than men. Made philanthropic investments.

What did they buy? (2) Women preferred certain sectors: transport, commercial and brewing, utilities and they liked local and brand name investments they could see. By the 1930 s, companies with over 50% women investors included: • Bon Marché • Boots • J. Lyons and Company • London Electric Tramway • Wantage Tramway • Southern Mahratta Railway Company • Anglo-Persian Oil Company By WWII, well over 40% of investors were women, up from 3% in 1860.

Women’s participation. Women attended AGMs: “Lady shareholders were to the fore with suggestions at the annual meeting. . . of Slater’s” recommending that they reduce their prices which were higher than that of the competition, and employ lady inspectors. (1911) Women worried about employees: Mrs Thomson, at the 1920 AGM of Ebbw Vale Steel, Iron and Coal Company, suggested a subsidised employee share option scheme. Women wrote to companies: Mrs Gurrin to Prudential Assurance, 1920, re the dividend cut, “I suppose that men can find another way of increasing their incomes but I can’t. ”

Conclusions (1) 100 years ago, women were forced to think about savings and investment. They had to maximise yield on their investments, whilst keeping risk as low as possible. They invested directly rather than through funds They were relatively financially literate, from household budgeting to interest yields. • There was plenty of advice available. • They preferred certain types of security, certain sectors more than others.

Conclusions (2) In line with modern day research, women in the past also exhibited risk aversion, lack of confidence, and a tendency to ask for personal recommendations. BUT Not all women were risk averse, or vulnerable. Many were well informed and some sought risk with surplus funds. Understanding the range of women’s financial behaviour and the social, cultural and economic factors affecting it is vital. In the UK “it is predicted that women will own 60% of the nation’s wealth by 2025 (CEBR 2005)”.