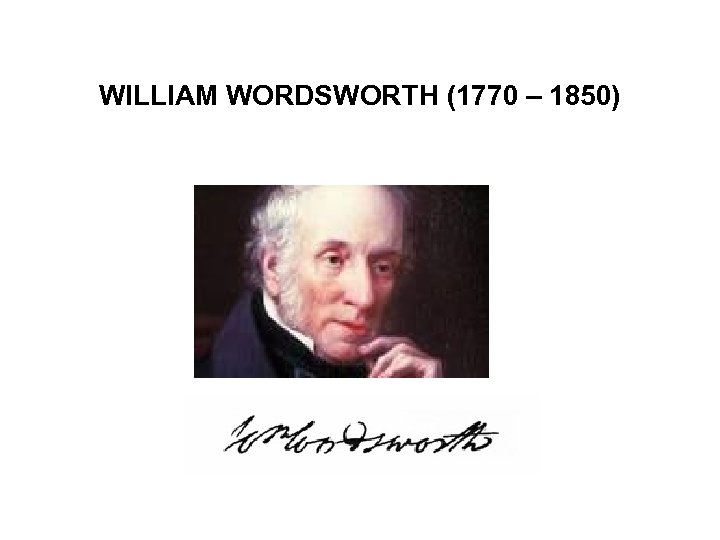 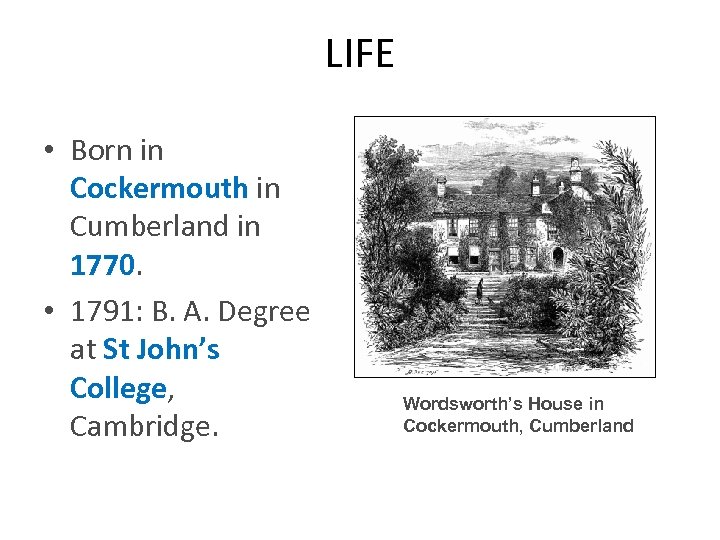 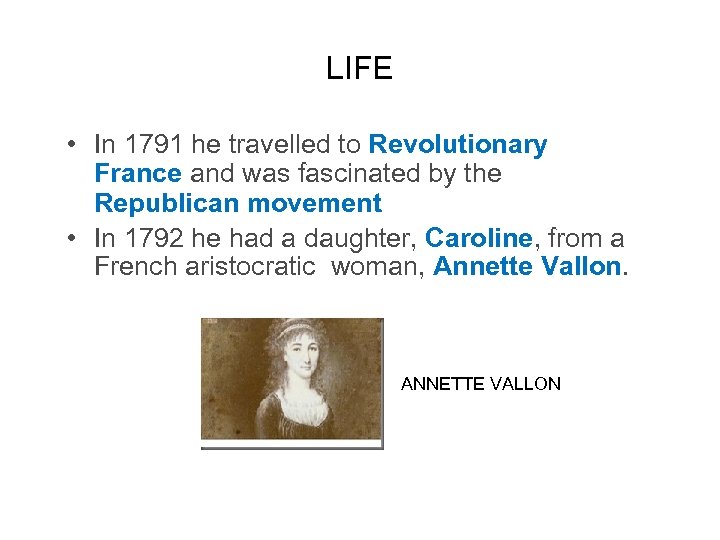 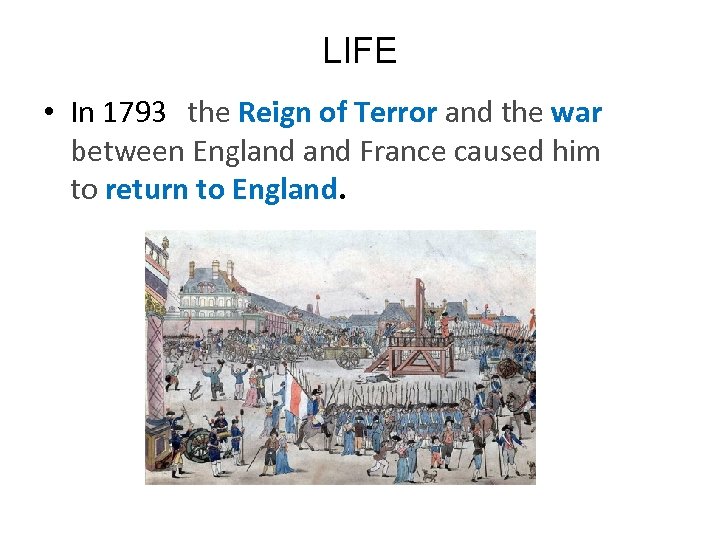 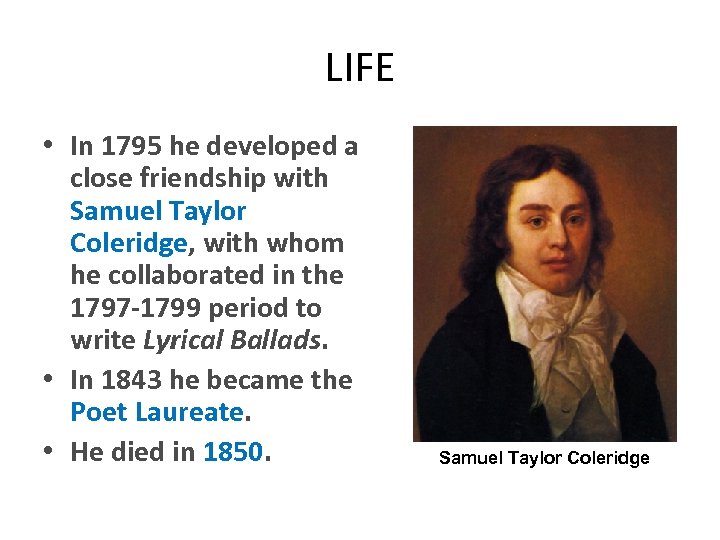 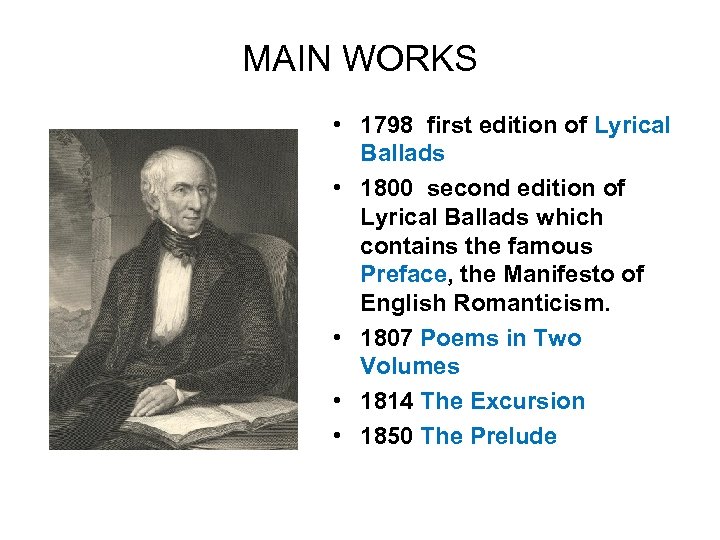 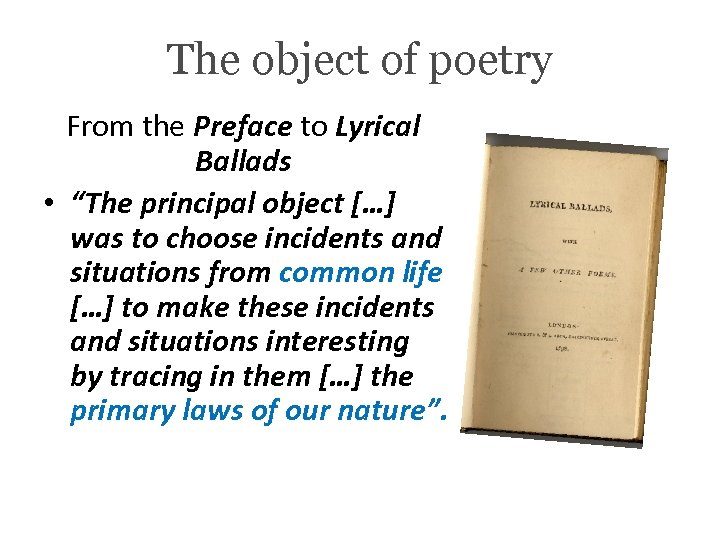 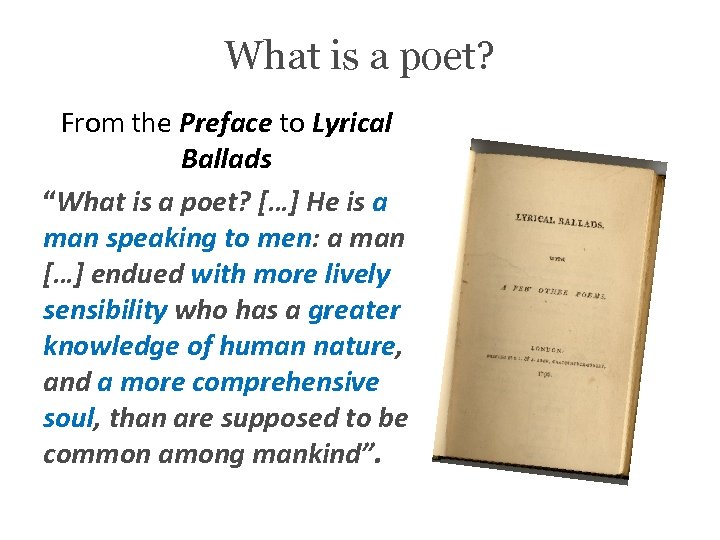 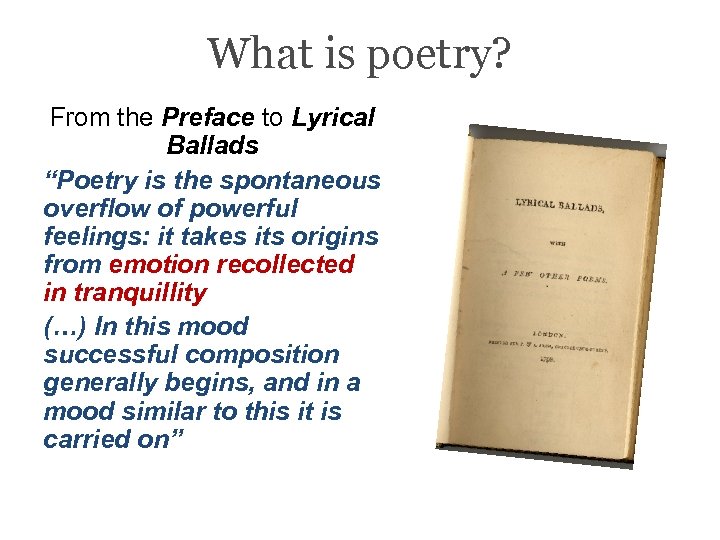 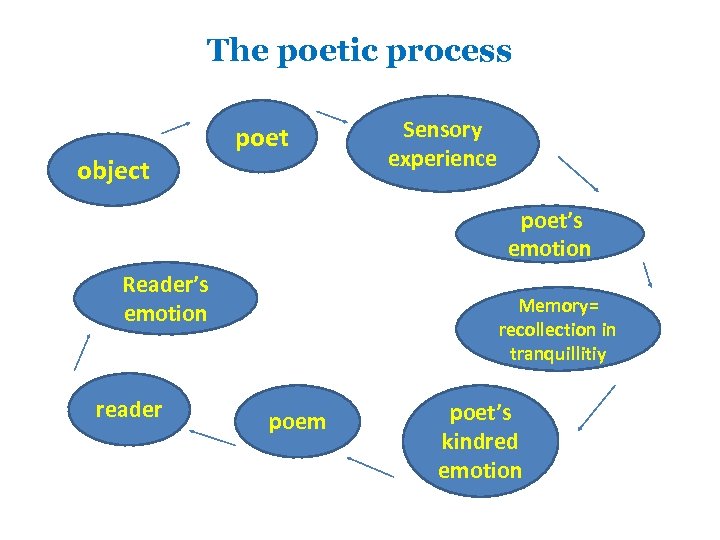 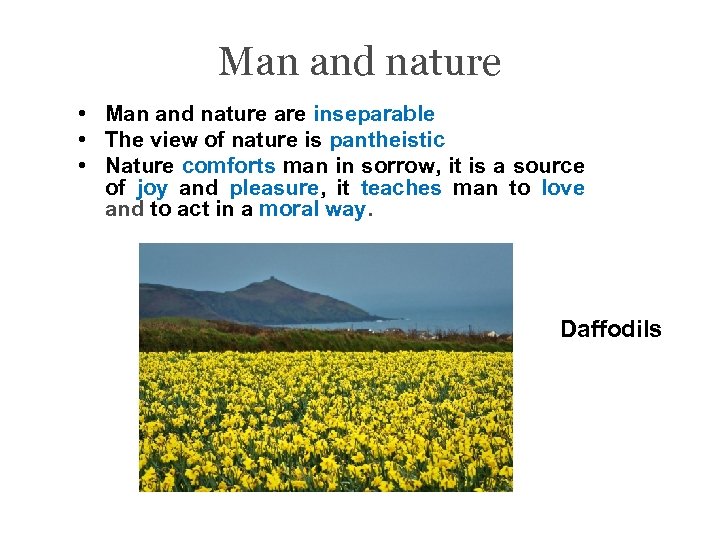 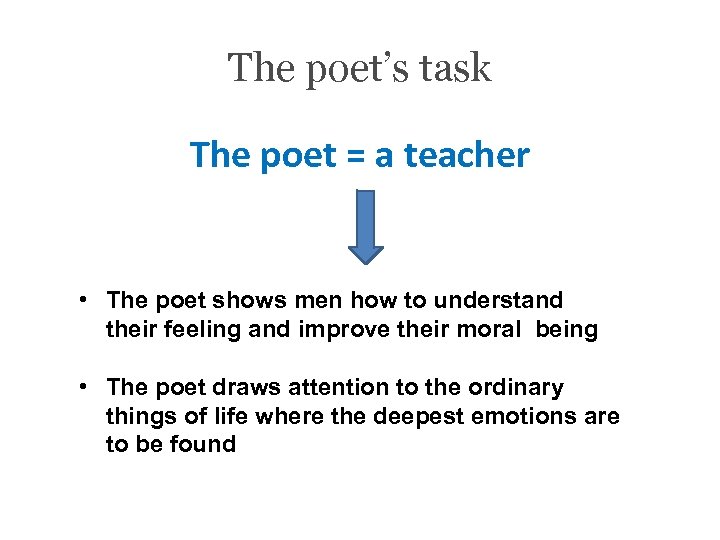 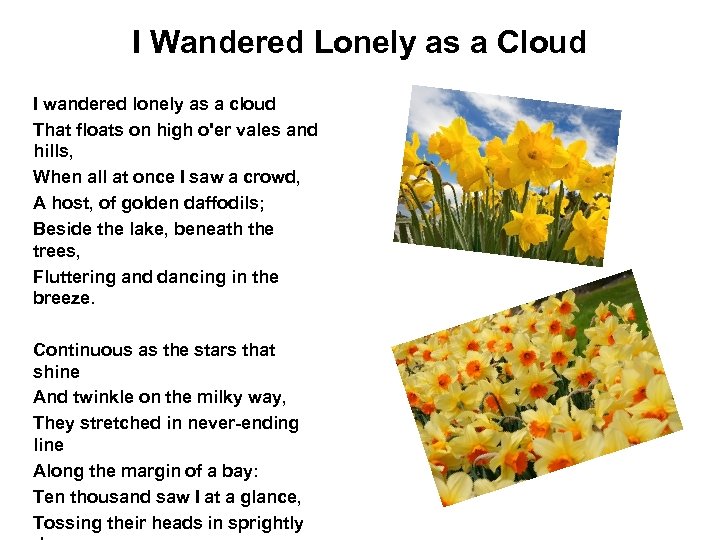 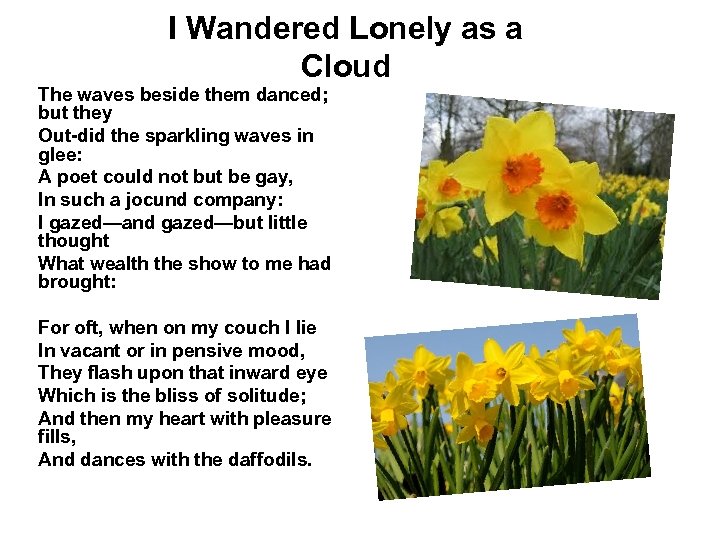 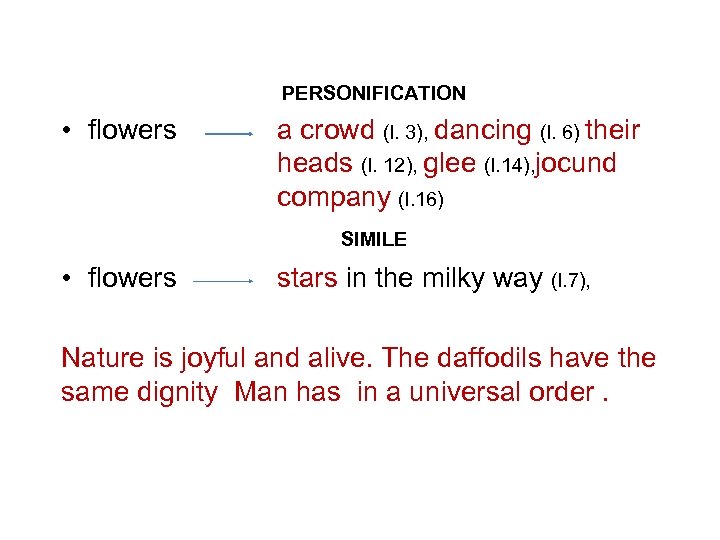 LIFE • In 1791 he travelled to Revolutionary France and was fascinated by the Republican movement • In 1792 he had a daughter, Caroline, from a French aristocratic woman, Annette Vallon. ANNETTE VALLON

LIFE • In 1793 the Reign of Terror and the war between England France caused him to return to England.

What is a poet? From the Preface to Lyrical Ballads “What is a poet? […] He is a man speaking to men: a man […] endued with more lively sensibility who has a greater knowledge of human nature, and a more comprehensive soul, than are supposed to be common among mankind”.

What is poetry? From the Preface to Lyrical Ballads “Poetry is the spontaneous overflow of powerful feelings: it takes its origins from emotion recollected in tranquillity (…) In this mood successful composition generally begins, and in a mood similar to this it is carried on”

Man and nature • Man and nature are inseparable • The view of nature is pantheistic • Nature comforts man in sorrow, it is a source of joy and pleasure, it teaches man to love and to act in a moral way. Daffodils

I Wandered Lonely as a Cloud I wandered lonely as a cloud That floats on high o'er vales and hills, When all at once I saw a crowd, A host, of golden daffodils; Beside the lake, beneath the trees, Fluttering and dancing in the breeze. Continuous as the stars that shine And twinkle on the milky way, They stretched in never-ending line Along the margin of a bay: Ten thousand saw I at a glance, Tossing their heads in sprightly

I Wandered Lonely as a Cloud The waves beside them danced; but they Out-did the sparkling waves in glee: A poet could not but be gay, In such a jocund company: I gazed—and gazed—but little thought What wealth the show to me had brought: For oft, when on my couch I lie In vacant or in pensive mood, They flash upon that inward eye Which is the bliss of solitude; And then my heart with pleasure fills, And dances with the daffodils.