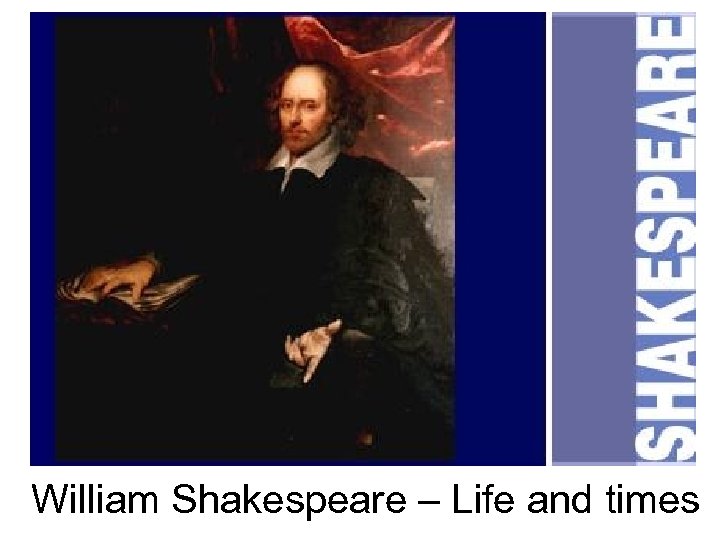 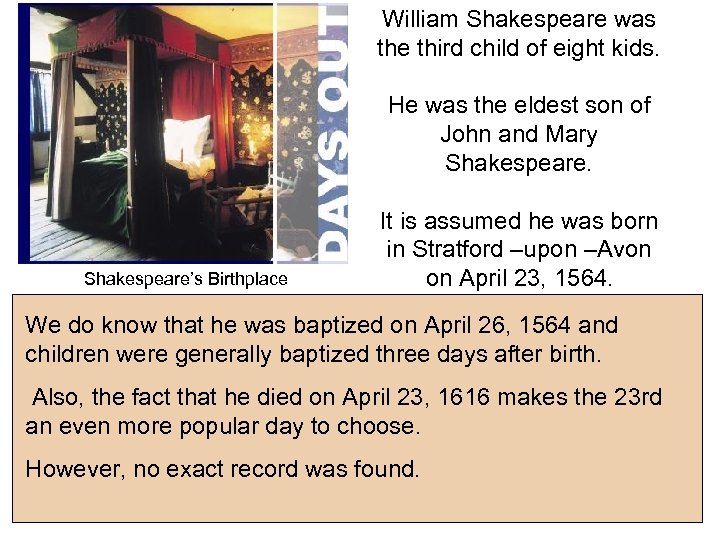 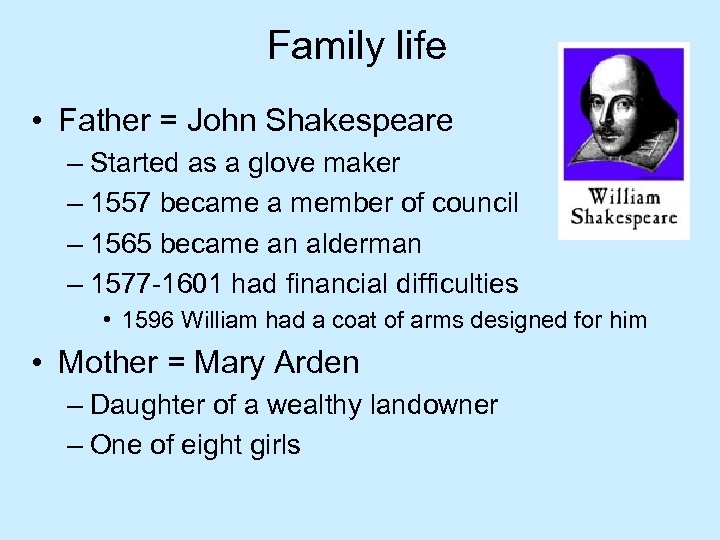 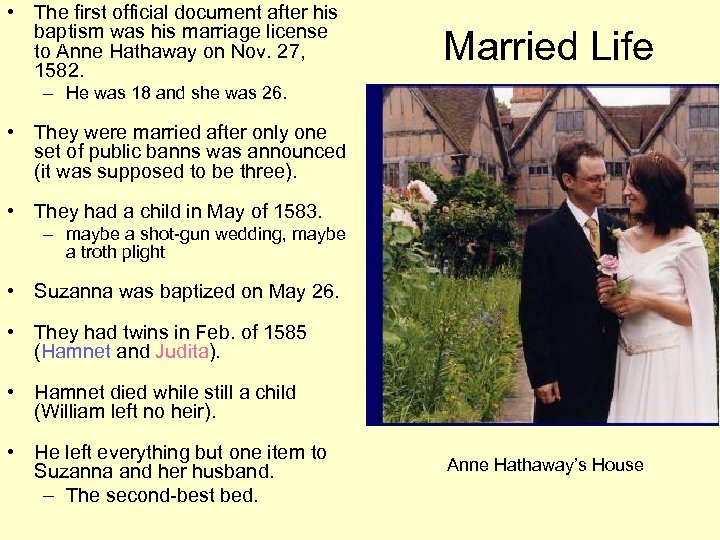 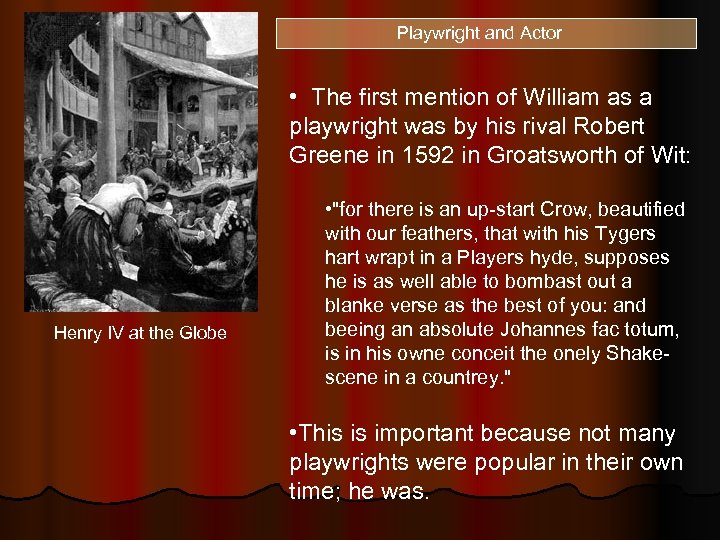 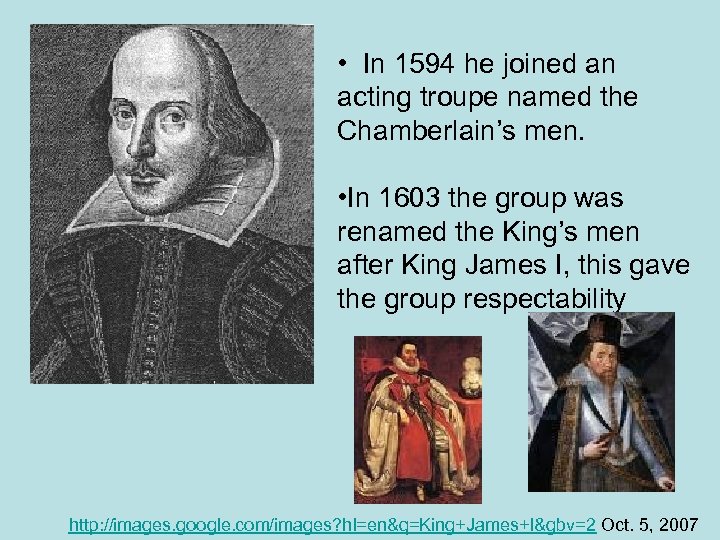 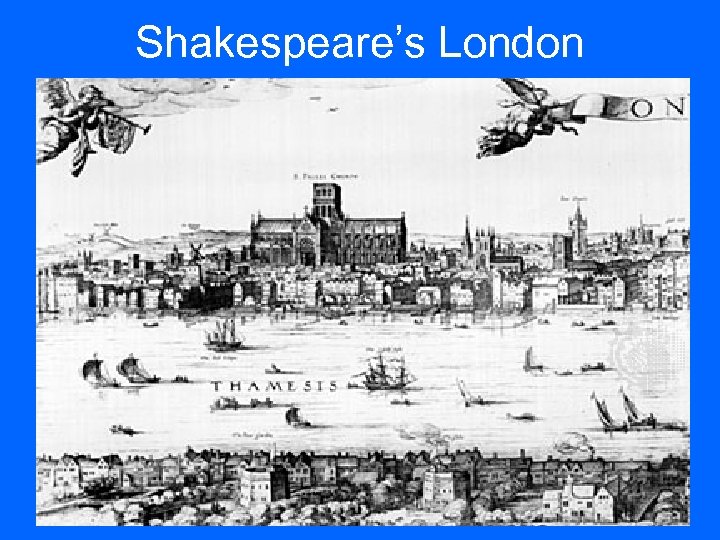 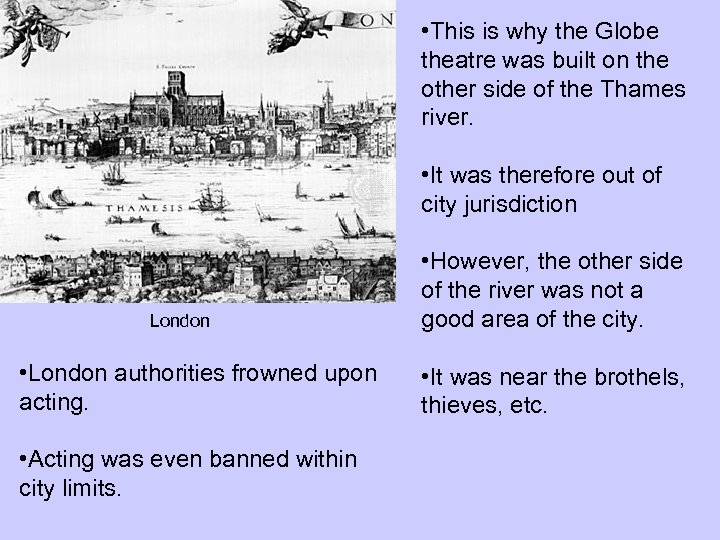 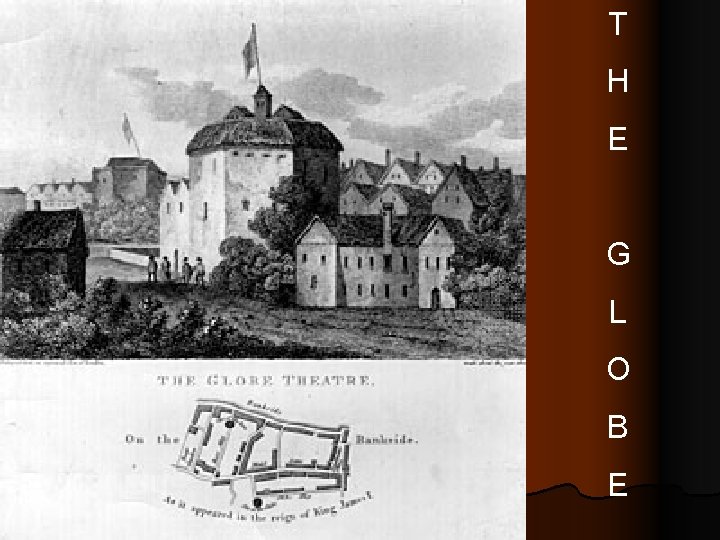 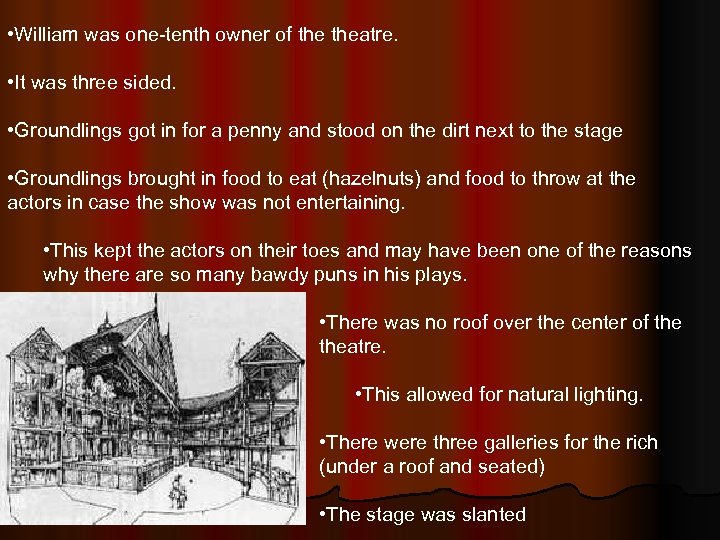 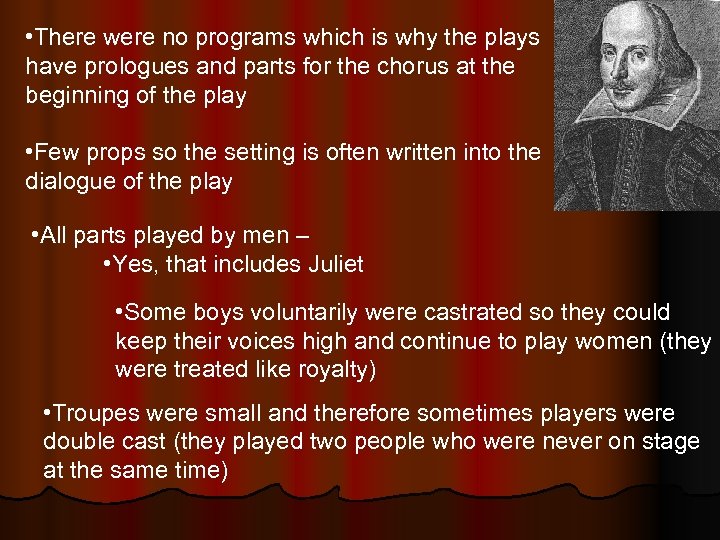 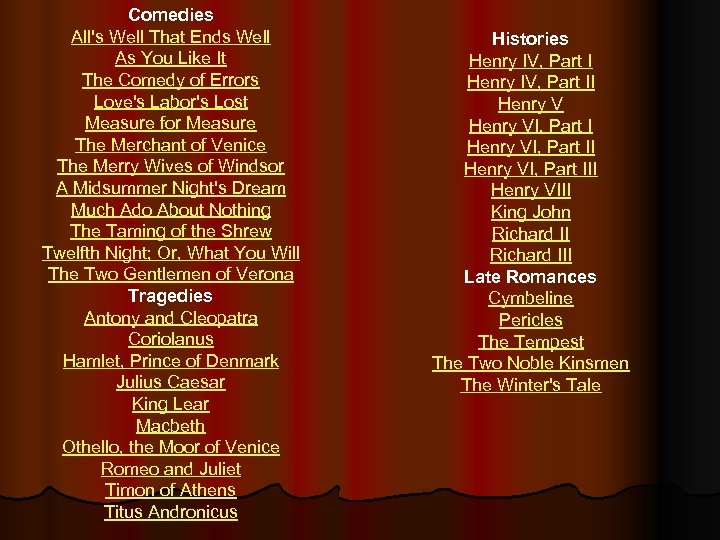 William Shakespeare was the third child of eight kids. He was the eldest son of John and Mary Shakespeare’s Birthplace It is assumed he was born in Stratford –upon –Avon on April 23, 1564. We do know that he was baptized on April 26, 1564 and children were generally baptized three days after birth. Also, the fact that he died on April 23, 1616 makes the 23 rd an even more popular day to choose. However, no exact record was found.

• The first official document after his baptism was his marriage license to Anne Hathaway on Nov. 27, 1582. Married Life – He was 18 and she was 26. • They were married after only one set of public banns was announced (it was supposed to be three). • They had a child in May of 1583. – maybe a shot-gun wedding, maybe a troth plight • Suzanna was baptized on May 26. • They had twins in Feb. of 1585 (Hamnet and Judita). • Hamnet died while still a child (William left no heir). • He left everything but one item to Suzanna and her husband. – The second-best bed. Anne Hathaway’s House

Playwright and Actor • The first mention of William as a playwright was by his rival Robert Greene in 1592 in Groatsworth of Wit: Henry IV at the Globe • "for there is an up-start Crow, beautified with our feathers, that with his Tygers hart wrapt in a Players hyde, supposes he is as well able to bombast out a blanke verse as the best of you: and beeing an absolute Johannes fac totum, is in his owne conceit the onely Shakescene in a countrey. " • This is important because not many playwrights were popular in their own time; he was.

• This is why the Globe theatre was built on the other side of the Thames river. • It was therefore out of city jurisdiction London • London authorities frowned upon acting. • Acting was even banned within city limits. • However, the other side of the river was not a good area of the city. • It was near the brothels, thieves, etc.

• William was one-tenth owner of theatre. • It was three sided. • Groundlings got in for a penny and stood on the dirt next to the stage • Groundlings brought in food to eat (hazelnuts) and food to throw at the actors in case the show was not entertaining. • This kept the actors on their toes and may have been one of the reasons why there are so many bawdy puns in his plays. • There was no roof over the center of theatre. • This allowed for natural lighting. • There were three galleries for the rich (under a roof and seated) • The stage was slanted

• There were no programs which is why the plays have prologues and parts for the chorus at the beginning of the play • Few props so the setting is often written into the dialogue of the play • All parts played by men – • Yes, that includes Juliet • Some boys voluntarily were castrated so they could keep their voices high and continue to play women (they were treated like royalty) • Troupes were small and therefore sometimes players were double cast (they played two people who were never on stage at the same time)

Comedies All's Well That Ends Well As You Like It The Comedy of Errors Love's Labor's Lost Measure for Measure The Merchant of Venice The Merry Wives of Windsor A Midsummer Night's Dream Much Ado About Nothing The Taming of the Shrew Twelfth Night; Or, What You Will The Two Gentlemen of Verona Tragedies Antony and Cleopatra Coriolanus Hamlet, Prince of Denmark Julius Caesar King Lear Macbeth Othello, the Moor of Venice Romeo and Juliet Timon of Athens Titus Andronicus Histories Henry IV, Part II Henry VI, Part III Henry VIII King John Richard III Late Romances Cymbeline Pericles The Tempest The Two Noble Kinsmen The Winter's Tale