Wi-Fi TECHNOLOGY Presentation was made by the student 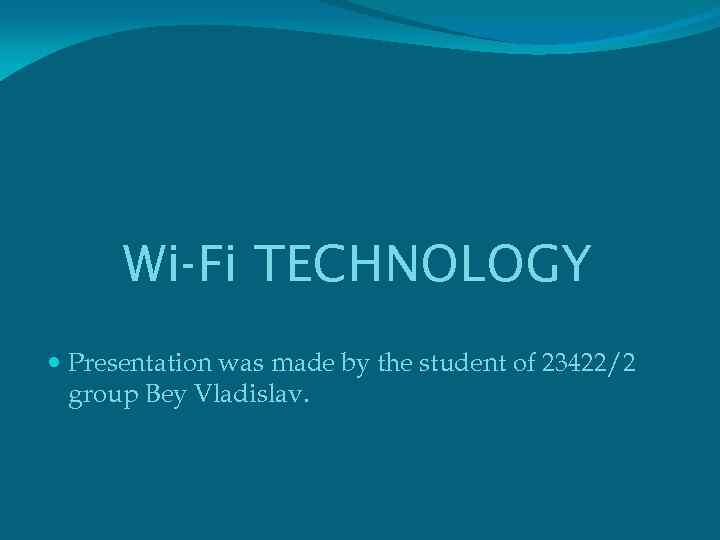 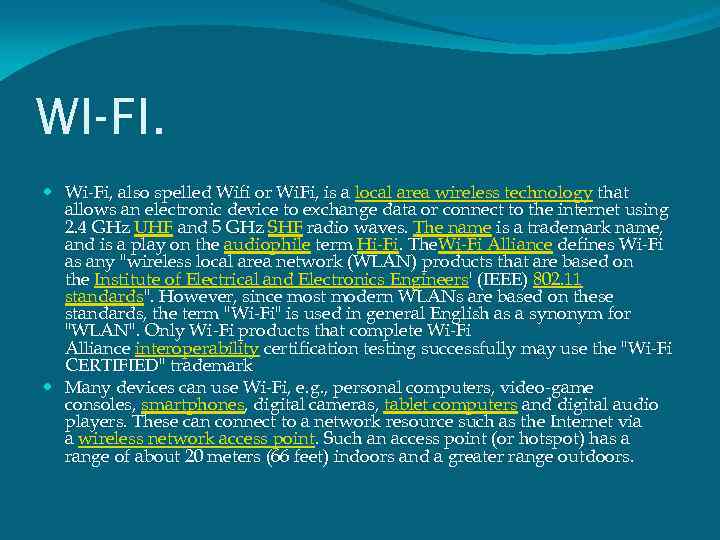 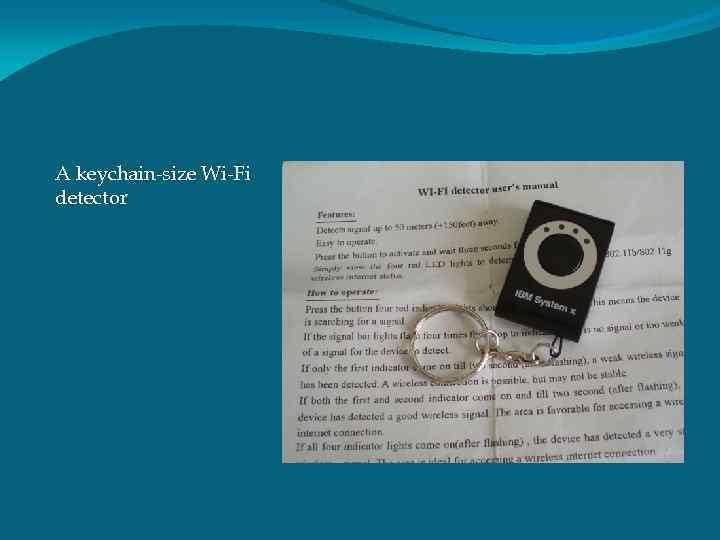 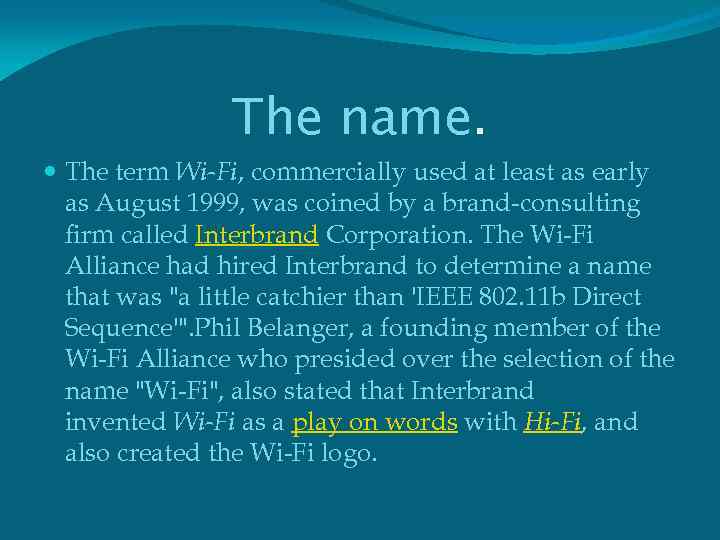 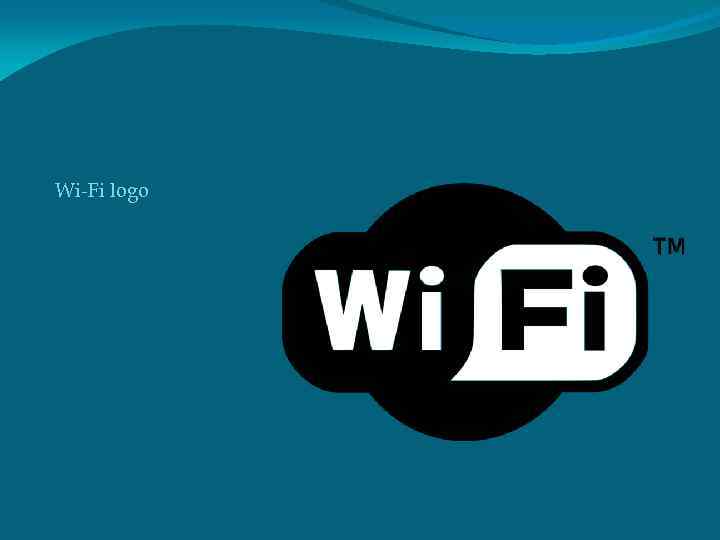 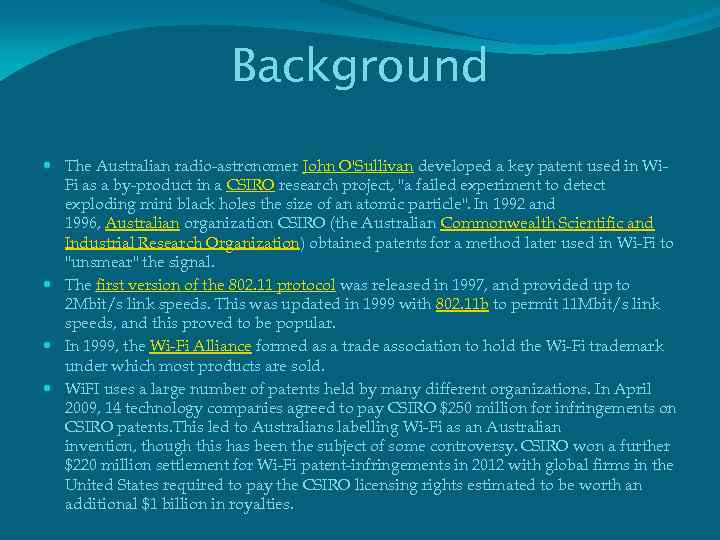 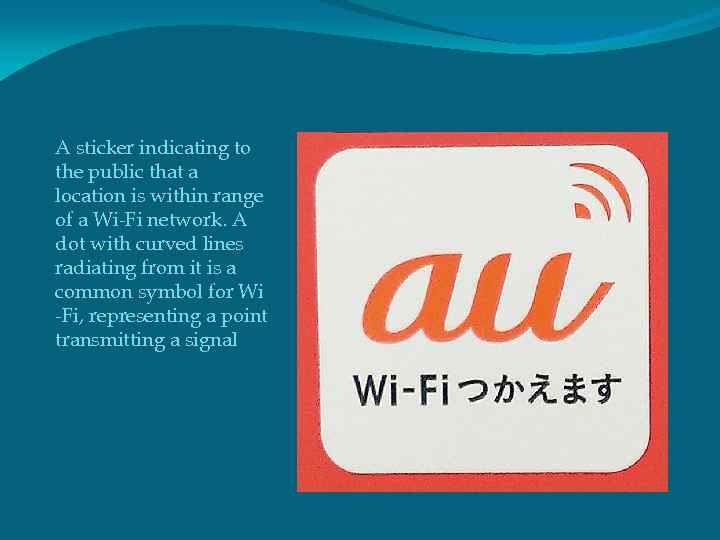 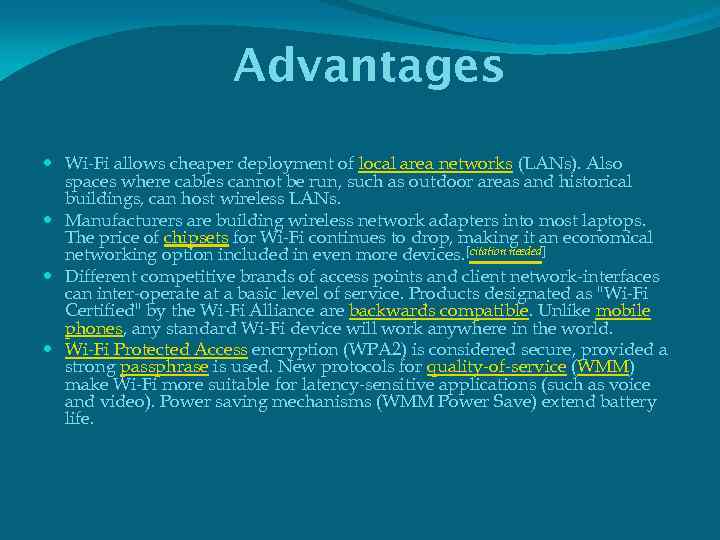 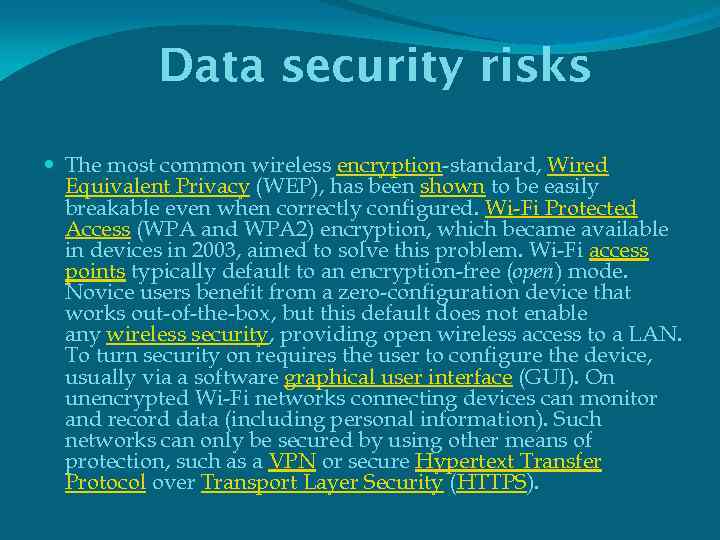 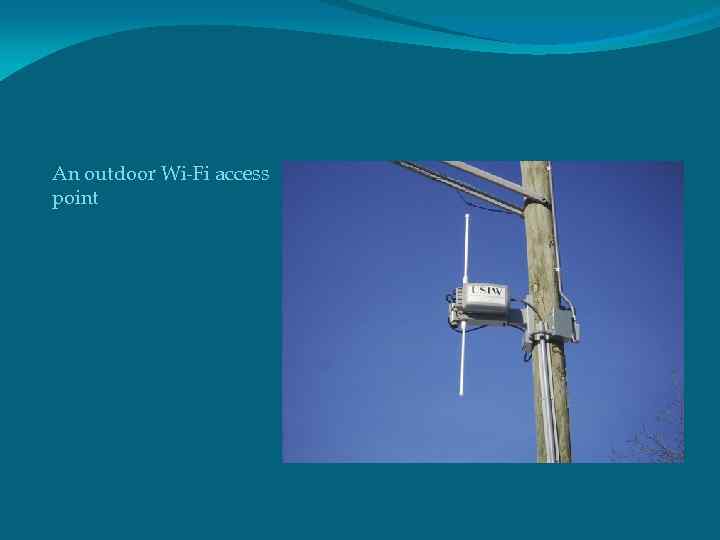 Скачать презентацию Wi-Fi TECHNOLOGY Presentation was made by the student

Wi-Fi TECHNOLOGY Presentation was made by the student of 23422/2 group Bey Vladislav.

WI-FI. Wi-Fi, also spelled Wifi or Wi. Fi, is a local area wireless technology that allows an electronic device to exchange data or connect to the internet using 2. 4 GHz UHF and 5 GHz SHF radio waves. The name is a trademark name, and is a play on the audiophile term Hi-Fi. The. Wi-Fi Alliance defines Wi-Fi as any "wireless local area network (WLAN) products that are based on the Institute of Electrical and Electronics Engineers' (IEEE) 802. 11 standards". However, since most modern WLANs are based on these standards, the term "Wi-Fi" is used in general English as a synonym for "WLAN". Only Wi-Fi products that complete Wi-Fi Alliance interoperability certification testing successfully may use the "Wi-Fi CERTIFIED" trademark Many devices can use Wi-Fi, e. g. , personal computers, video-game consoles, smartphones, digital cameras, tablet computers and digital audio players. These can connect to a network resource such as the Internet via a wireless network access point. Such an access point (or hotspot) has a range of about 20 meters (66 feet) indoors and a greater range outdoors.

The name. The term Wi-Fi, commercially used at least as early as August 1999, was coined by a brand-consulting firm called Interbrand Corporation. The Wi-Fi Alliance had hired Interbrand to determine a name that was "a little catchier than 'IEEE 802. 11 b Direct Sequence'". Phil Belanger, a founding member of the Wi-Fi Alliance who presided over the selection of the name "Wi-Fi", also stated that Interbrand invented Wi-Fi as a play on words with Hi-Fi, and also created the Wi-Fi logo.

Background The Australian radio-astronomer John O'Sullivan developed a key patent used in Wi. Fi as a by-product in a CSIRO research project, "a failed experiment to detect exploding mini black holes the size of an atomic particle". In 1992 and 1996, Australian organization CSIRO (the Australian Commonwealth Scientific and Industrial Research Organization) obtained patents for a method later used in Wi-Fi to "unsmear" the signal. The first version of the 802. 11 protocol was released in 1997, and provided up to 2 Mbit/s link speeds. This was updated in 1999 with 802. 11 b to permit 11 Mbit/s link speeds, and this proved to be popular. In 1999, the Wi-Fi Alliance formed as a trade association to hold the Wi-Fi trademark under which most products are sold. Wi. FI uses a large number of patents held by many different organizations. In April 2009, 14 technology companies agreed to pay CSIRO $250 million for infringements on CSIRO patents. This led to Australians labelling Wi-Fi as an Australian invention, though this has been the subject of some controversy. CSIRO won a further $220 million settlement for Wi-Fi patent-infringements in 2012 with global firms in the United States required to pay the CSIRO licensing rights estimated to be worth an additional $1 billion in royalties.

A sticker indicating to the public that a location is within range of a Wi-Fi network. A dot with curved lines radiating from it is a common symbol for Wi -Fi, representing a point transmitting a signal

Data security risks The most common wireless encryption-standard, Wired Equivalent Privacy (WEP), has been shown to be easily breakable even when correctly configured. Wi-Fi Protected Access (WPA and WPA 2) encryption, which became available in devices in 2003, aimed to solve this problem. Wi-Fi access points typically default to an encryption-free (open) mode. Novice users benefit from a zero-configuration device that works out-of-the-box, but this default does not enable any wireless security, providing open wireless access to a LAN. To turn security on requires the user to configure the device, usually via a software graphical user interface (GUI). On unencrypted Wi-Fi networks connecting devices can monitor and record data (including personal information). Such networks can only be secured by using other means of protection, such as a VPN or secure Hypertext Transfer Protocol over Transport Layer Security (HTTPS).