Who are the Allies of Allah Karamaat 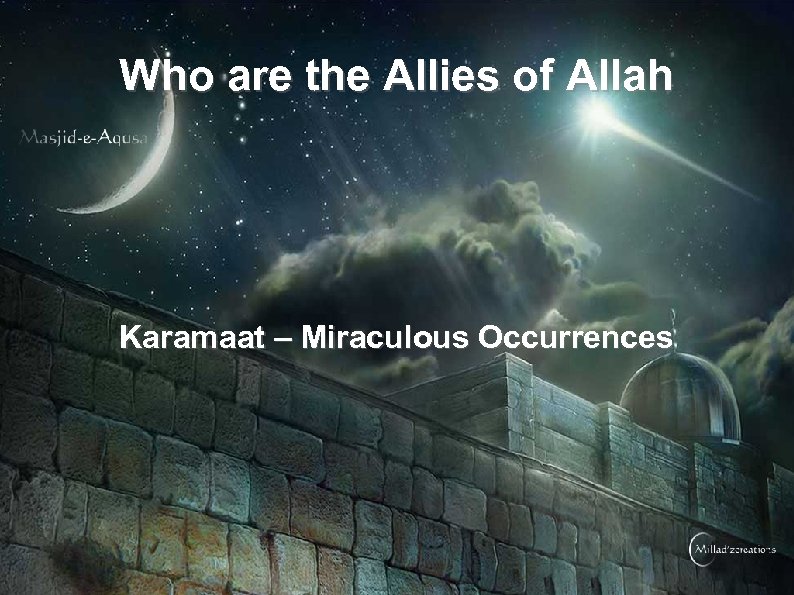 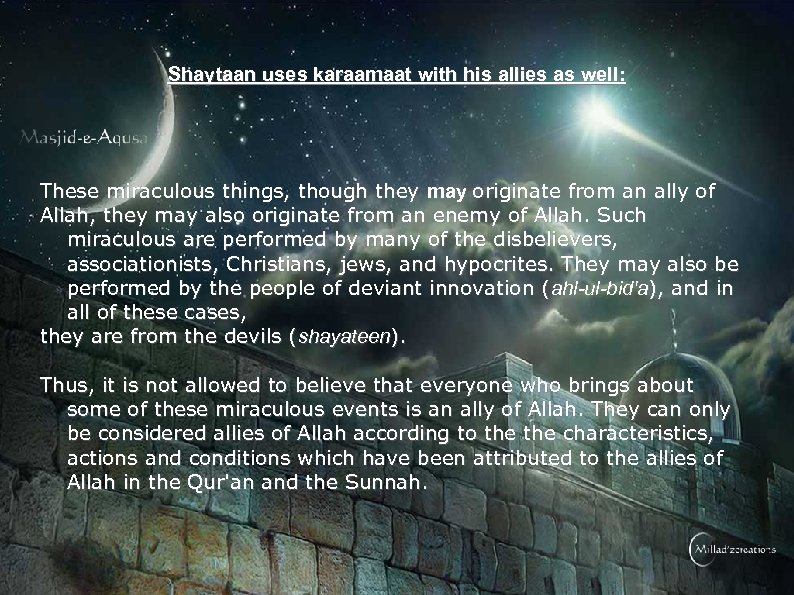 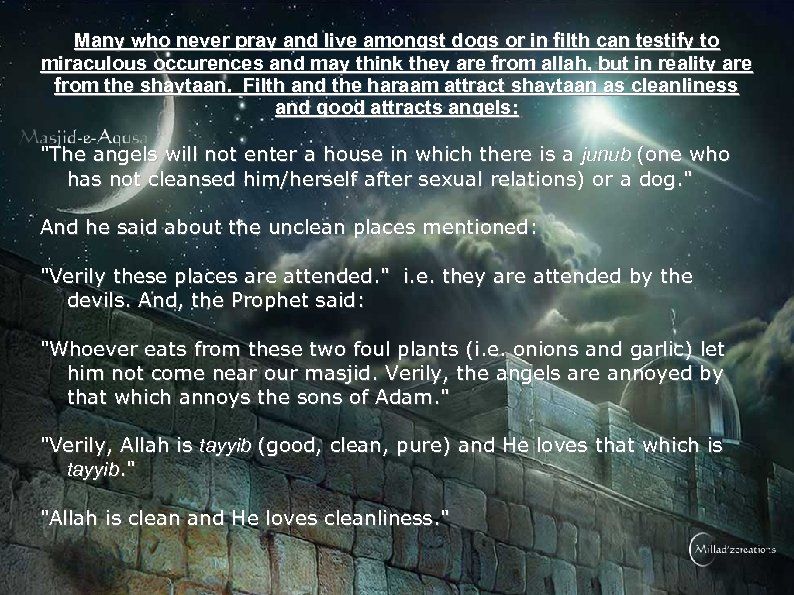 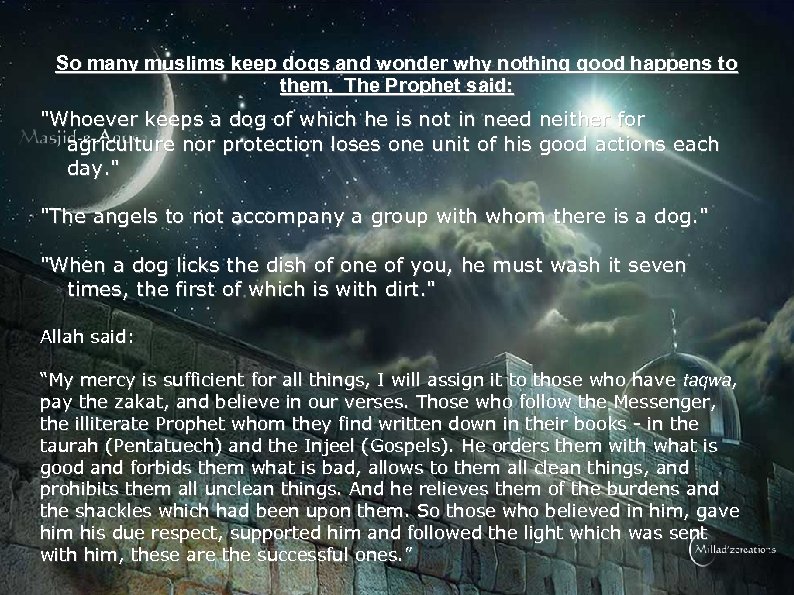 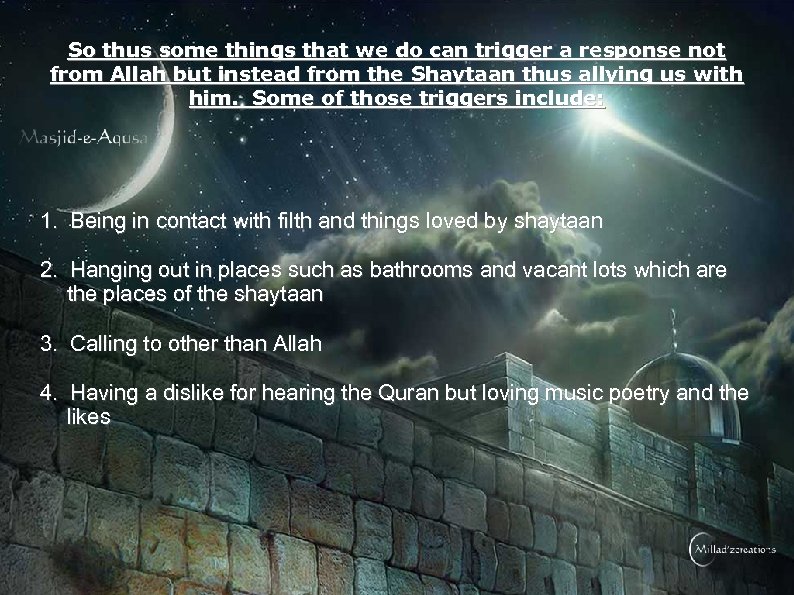 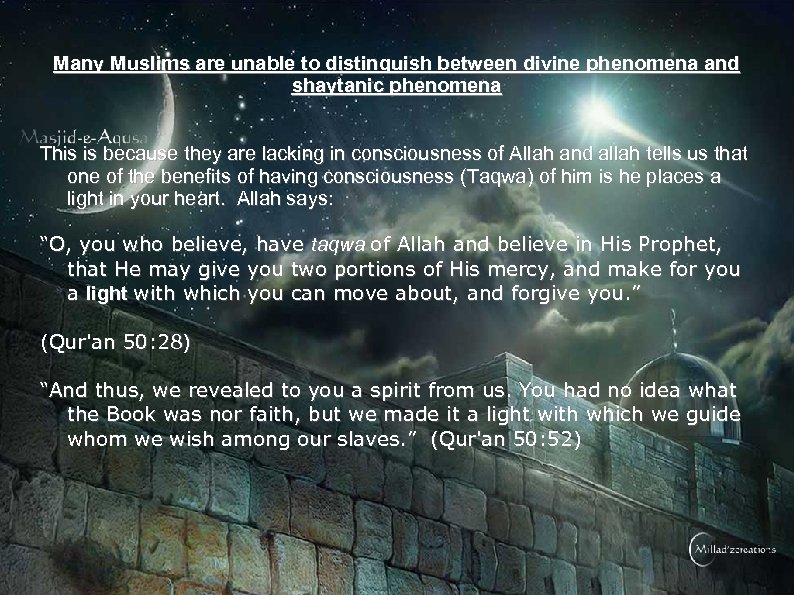 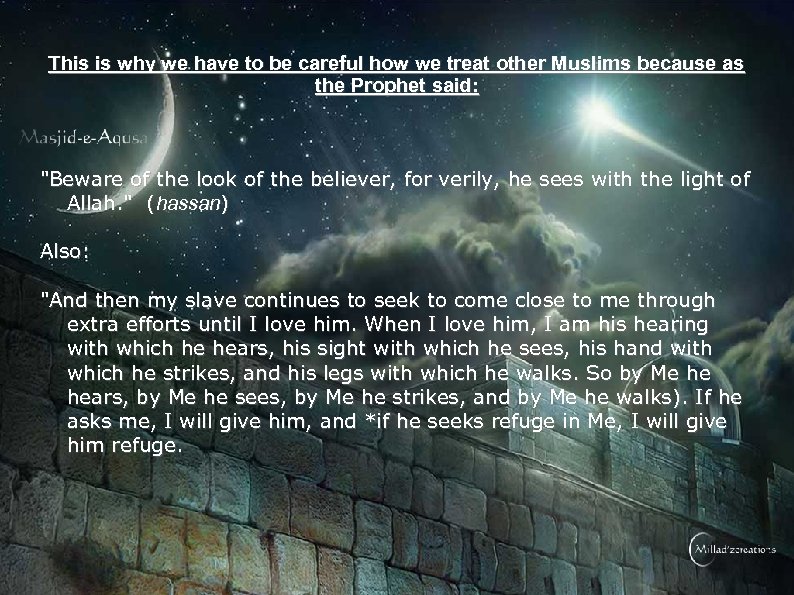 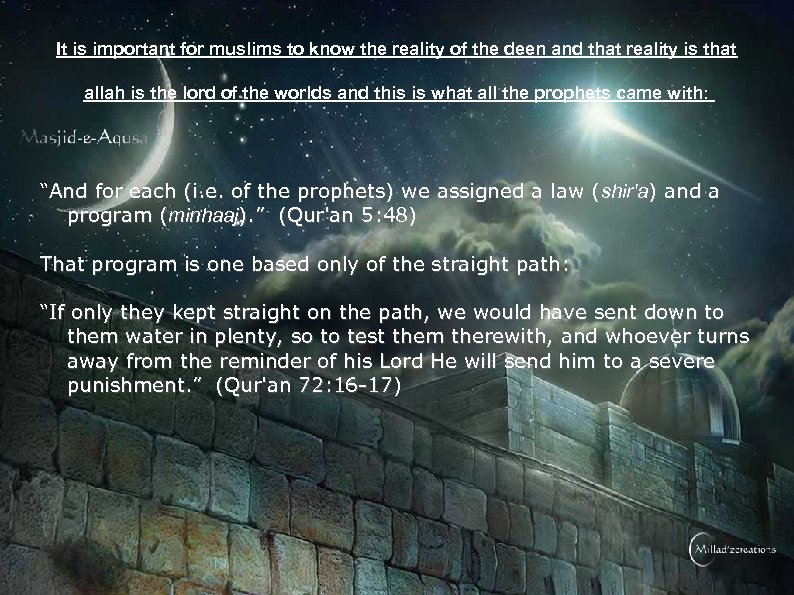 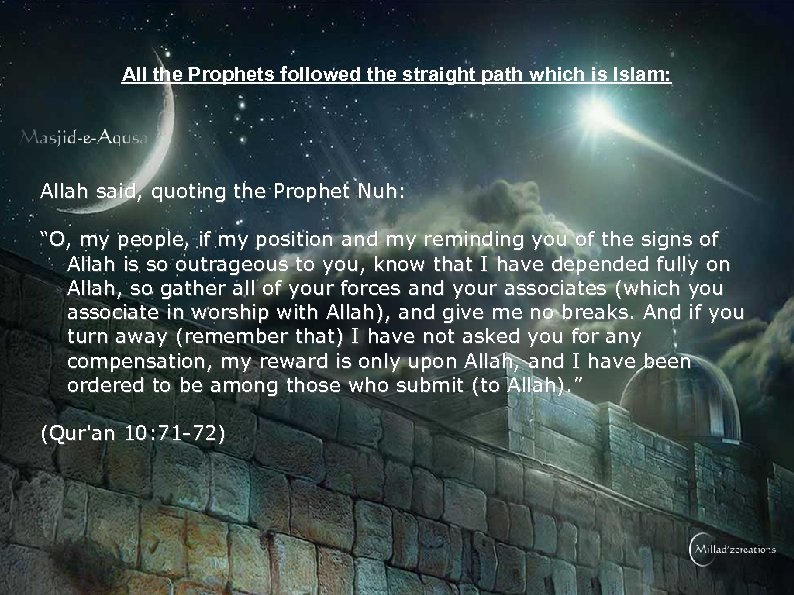 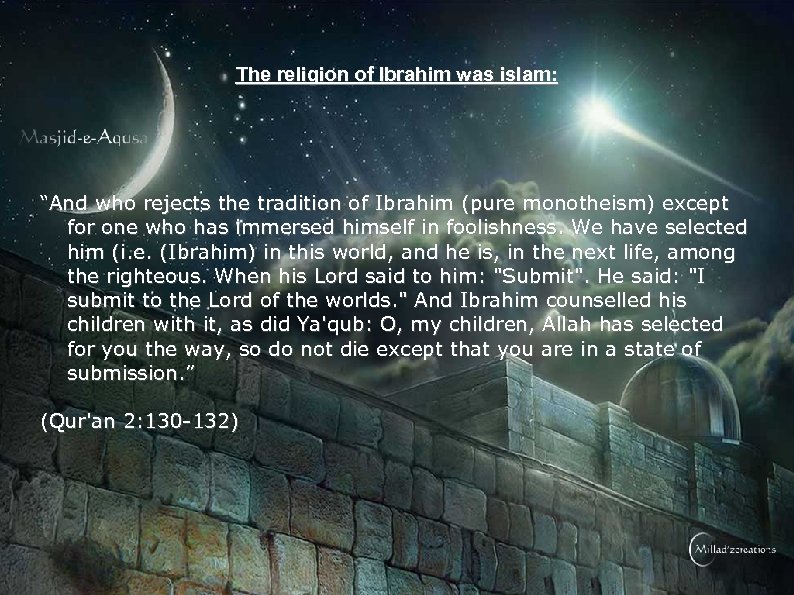 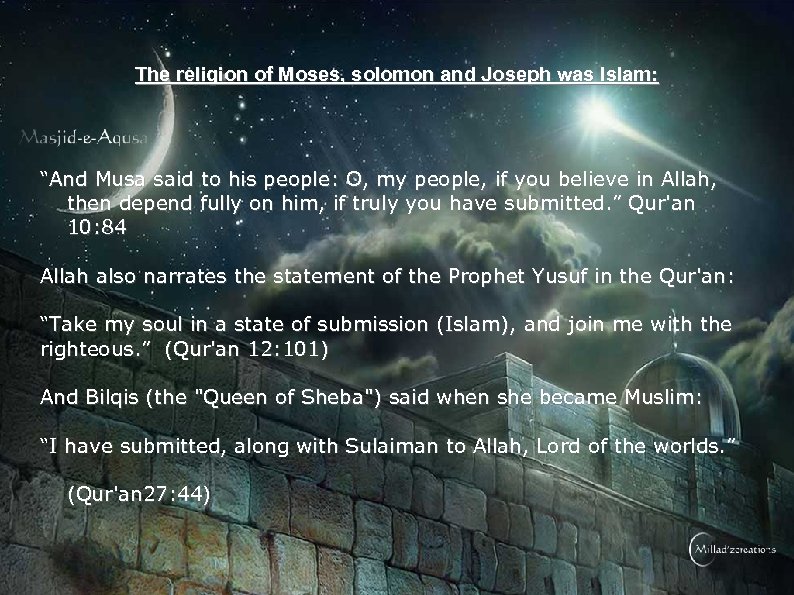 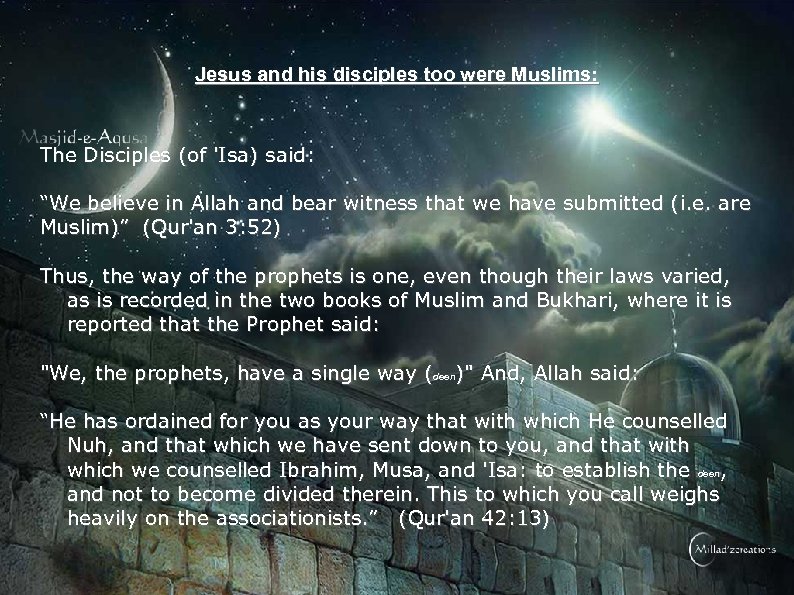 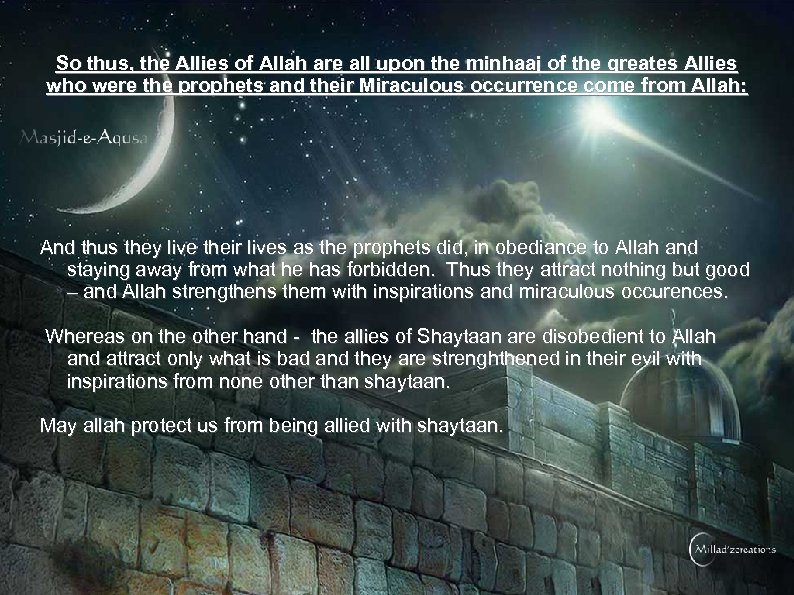 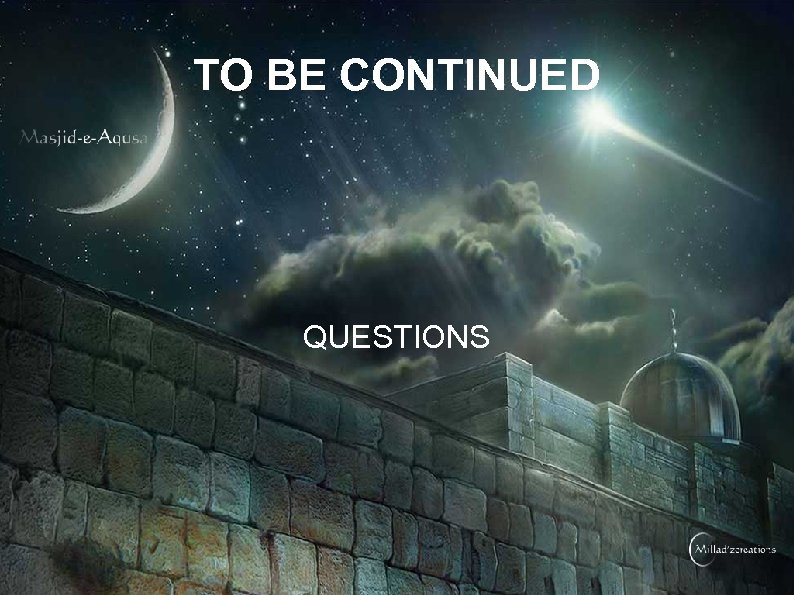 Who are the Allies of Allah Karamaat – Miraculous Occurrences

Shaytaan uses karaamaat with his allies as well: These miraculous things, though they may originate from an ally of Allah, they may also originate from an enemy of Allah. Such miraculous are performed by many of the disbelievers, associationists, Christians, jews, and hypocrites. They may also be performed by the people of deviant innovation (ahl-ul-bid'a), and in all of these cases, they are from the devils (shayateen). Thus, it is not allowed to believe that everyone who brings about some of these miraculous events is an ally of Allah. They can only be considered allies of Allah according to the characteristics, actions and conditions which have been attributed to the allies of Allah in the Qur'an and the Sunnah.

Many who never pray and live amongst dogs or in filth can testify to miraculous occurences and may think they are from allah, but in reality are from the shaytaan. Filth and the haraam attract shaytaan as cleanliness and good attracts angels: "The angels will not enter a house in which there is a junub (one who has not cleansed him/herself after sexual relations) or a dog. " And he said about the unclean places mentioned: "Verily these places are attended. " i. e. they are attended by the devils. And, the Prophet said: "Whoever eats from these two foul plants (i. e. onions and garlic) let him not come near our masjid. Verily, the angels are annoyed by that which annoys the sons of Adam. " "Verily, Allah is tayyib (good, clean, pure) and He loves that which is tayyib. " "Allah is clean and He loves cleanliness. "

So many muslims keep dogs and wonder why nothing good happens to them. The Prophet said: "Whoever keeps a dog of which he is not in need neither for agriculture nor protection loses one unit of his good actions each day. " "The angels to not accompany a group with whom there is a dog. " "When a dog licks the dish of one of you, he must wash it seven times, the first of which is with dirt. " Allah said: “My mercy is sufficient for all things, I will assign it to those who have taqwa, pay the zakat, and believe in our verses. Those who follow the Messenger, the illiterate Prophet whom they find written down in their books - in the taurah (Pentatuech) and the Injeel (Gospels). He orders them with what is good and forbids them what is bad, allows to them all clean things, and prohibits them all unclean things. And he relieves them of the burdens and the shackles which had been upon them. So those who believed in him, gave him his due respect, supported him and followed the light which was sent with him, these are the successful ones. ”

So thus some things that we do can trigger a response not from Allah but instead from the Shaytaan thus allying us with him. Some of those triggers include: 1. Being in contact with filth and things loved by shaytaan 2. Hanging out in places such as bathrooms and vacant lots which are the places of the shaytaan 3. Calling to other than Allah 4. Having a dislike for hearing the Quran but loving music poetry and the likes

Many Muslims are unable to distinguish between divine phenomena and shaytanic phenomena This is because they are lacking in consciousness of Allah and allah tells us that one of the benefits of having consciousness (Taqwa) of him is he places a light in your heart. Allah says: “O, you who believe, have taqwa of Allah and believe in His Prophet, that He may give you two portions of His mercy, and make for you a light with which you can move about, and forgive you. ” (Qur'an 50: 28) “And thus, we revealed to you a spirit from us. You had no idea what the Book was nor faith, but we made it a light with which we guide whom we wish among our slaves. ” (Qur'an 50: 52)

It is important for muslims to know the reality of the deen and that reality is that allah is the lord of the worlds and this is what all the prophets came with: “And for each (i. e. of the prophets) we assigned a law ( shir'a) and a program (minhaaj). ” (Qur'an 5: 48) That program is one based only of the straight path: “If only they kept straight on the path, we would have sent down to them water in plenty, so to test them therewith, and whoever turns away from the reminder of his Lord He will send him to a severe punishment. ” (Qur'an 72: 16 -17)

All the Prophets followed the straight path which is Islam: Allah said, quoting the Prophet Nuh: “O, my people, if my position and my reminding you of the signs of Allah is so outrageous to you, know that I have depended fully on Allah, so gather all of your forces and your associates (which you associate in worship with Allah), and give me no breaks. And if you turn away (remember that) I have not asked you for any compensation, my reward is only upon Allah, and I have been ordered to be among those who submit (to Allah). ” (Qur'an 10: 71 -72)

The religion of Ibrahim was islam: “And who rejects the tradition of Ibrahim (pure monotheism) except for one who has immersed himself in foolishness. We have selected him (i. e. (Ibrahim) in this world, and he is, in the next life, among the righteous. When his Lord said to him: "Submit". He said: "I submit to the Lord of the worlds. " And Ibrahim counselled his children with it, as did Ya'qub: O, my children, Allah has selected for you the way, so do not die except that you are in a state of submission. ” (Qur'an 2: 130 -132)

The religion of Moses, solomon and Joseph was Islam: “And Musa said to his people: O, my people, if you believe in Allah, then depend fully on him, if truly you have submitted. ” Qur'an 10: 84 Allah also narrates the statement of the Prophet Yusuf in the Qur'an: “Take my soul in a state of submission (Islam), and join me with the righteous. ” (Qur'an 12: 101) And Bilqis (the "Queen of Sheba") said when she became Muslim: “I have submitted, along with Sulaiman to Allah, Lord of the worlds. ” (Qur'an 27: 44)

Jesus and his disciples too were Muslims: The Disciples (of 'Isa) said: “We believe in Allah and bear witness that we have submitted (i. e. are Muslim)” (Qur'an 3: 52) Thus, the way of the prophets is one, even though their laws varied, as is recorded in the two books of Muslim and Bukhari, where it is reported that the Prophet said: "We, the prophets, have a single way (deen)" And, Allah said: “He has ordained for you as your way that with which He counselled Nuh, and that which we have sent down to you, and that with which we counselled Ibrahim, Musa, and 'Isa: to establish the deen, and not to become divided therein. This to which you call weighs heavily on the associationists. ” (Qur'an 42: 13)

So thus, the Allies of Allah are all upon the minhaaj of the greates Allies who were the prophets and their Miraculous occurrence come from Allah: And thus they live their lives as the prophets did, in obediance to Allah and staying away from what he has forbidden. Thus they attract nothing but good – and Allah strengthens them with inspirations and miraculous occurences. Whereas on the other hand - the allies of Shaytaan are disobedient to Allah and attract only what is bad and they are strenghthened in their evil with inspirations from none other than shaytaan. May allah protect us from being allied with shaytaan.

TO BE CONTINUED QUESTIONS

The Two Sides in the Civil War The