When disadvantageous changes in tax rules are introduced 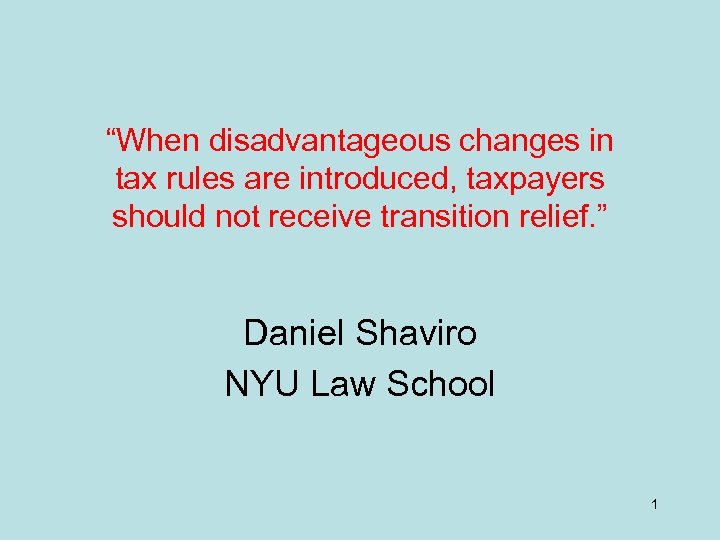 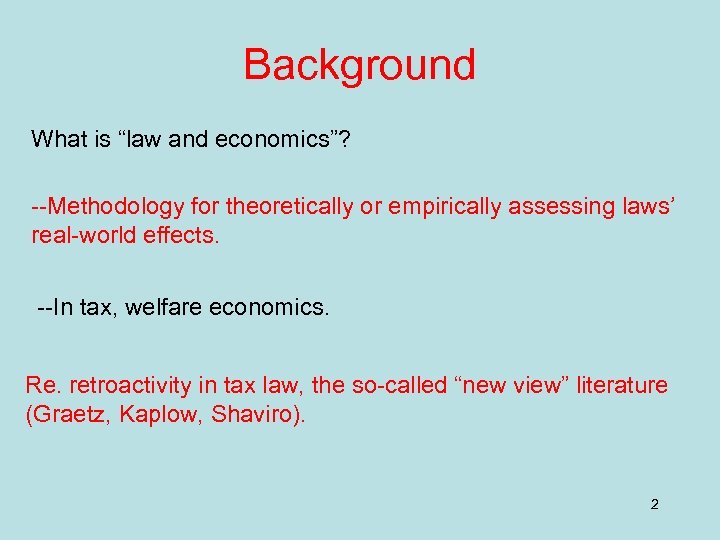 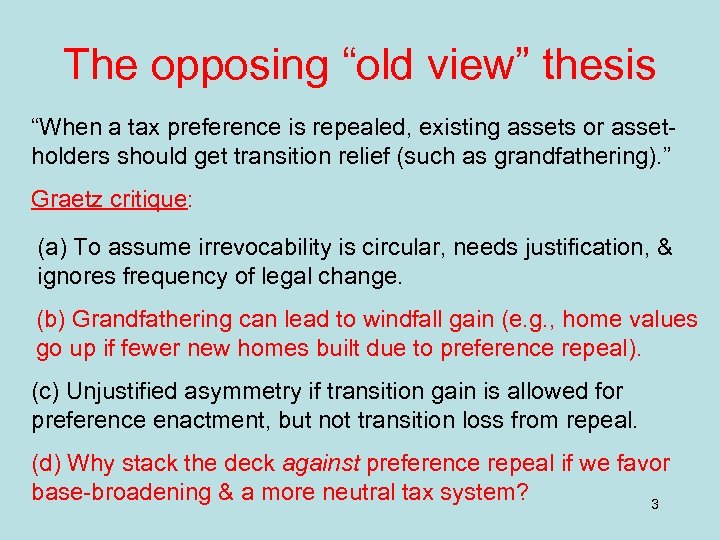 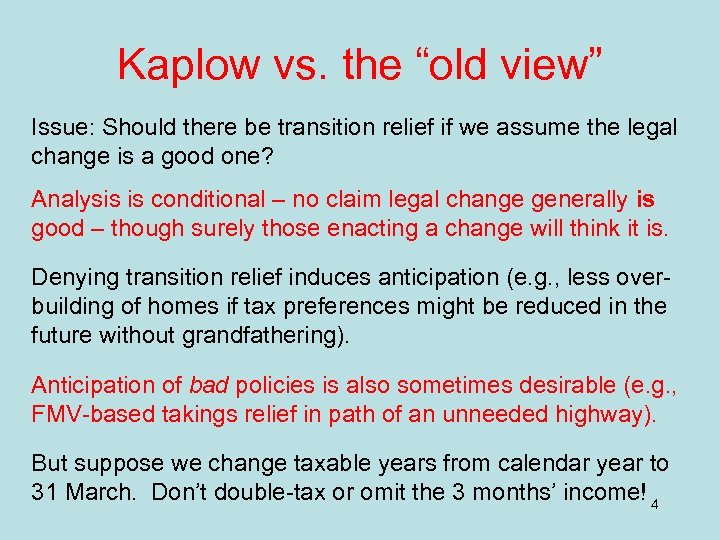 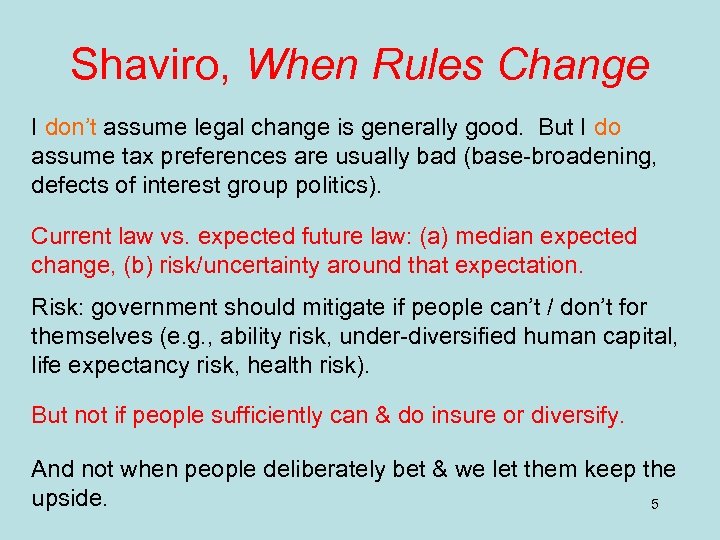 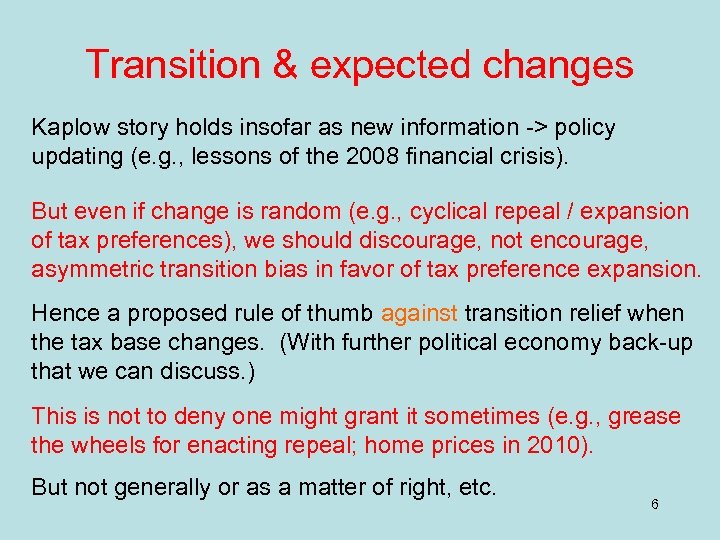 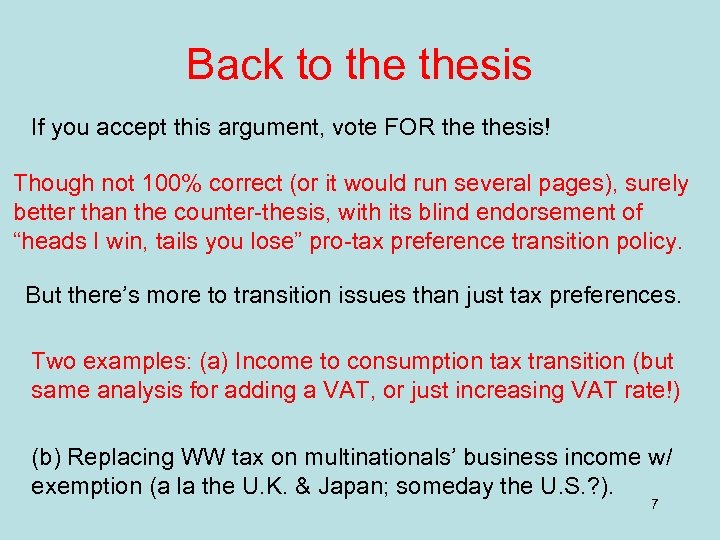 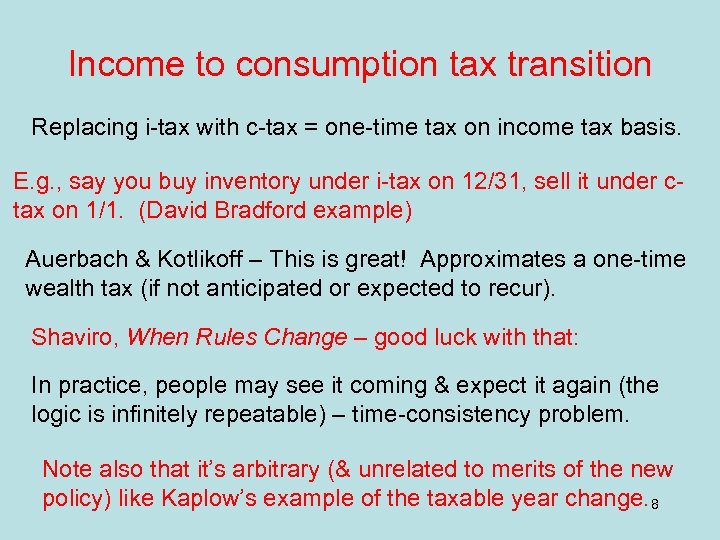 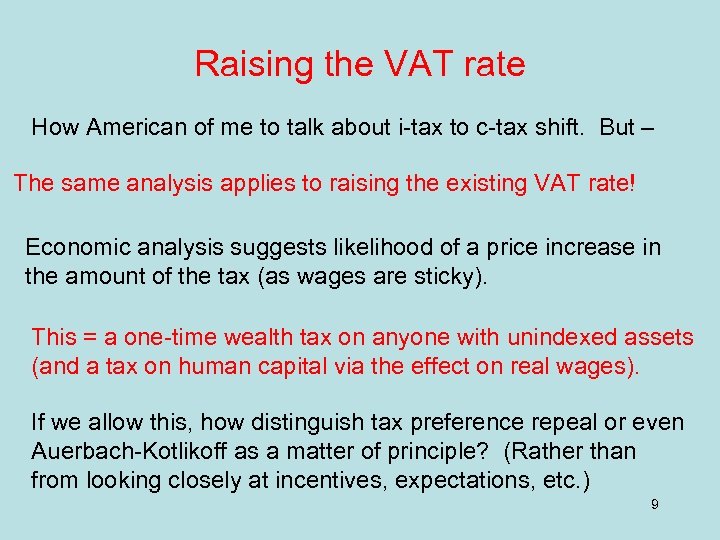 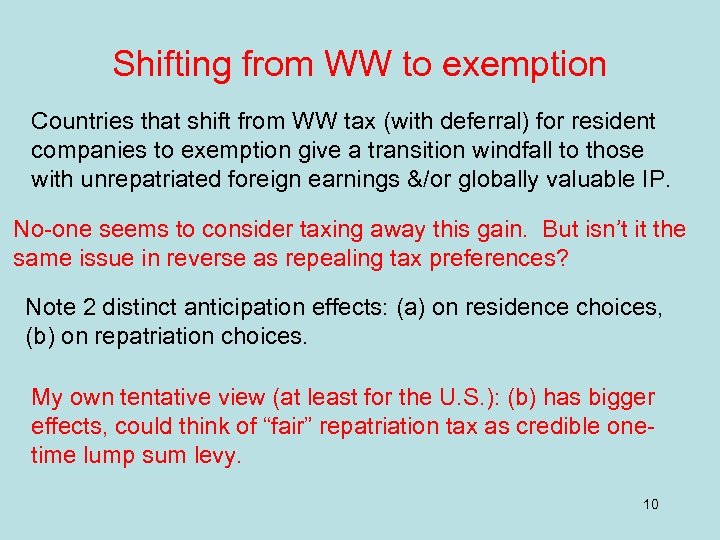 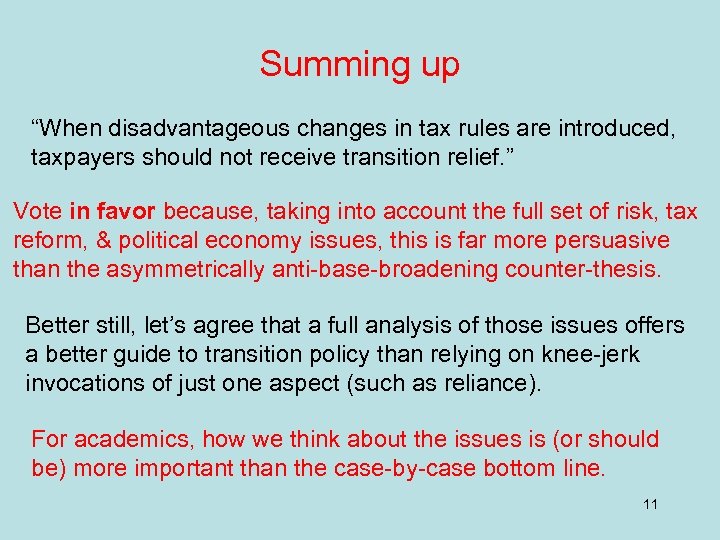 Скачать презентацию When disadvantageous changes in tax rules are introduced

The opposing “old view” thesis “When a tax preference is repealed, existing assets or assetholders should get transition relief (such as grandfathering). ” Graetz critique: (a) To assume irrevocability is circular, needs justification, & ignores frequency of legal change. (b) Grandfathering can lead to windfall gain (e. g. , home values go up if fewer new homes built due to preference repeal). (c) Unjustified asymmetry if transition gain is allowed for preference enactment, but not transition loss from repeal. (d) Why stack the deck against preference repeal if we favor base-broadening & a more neutral tax system? 3

Kaplow vs. the “old view” Issue: Should there be transition relief if we assume the legal change is a good one? Analysis is conditional – no claim legal change generally is good – though surely those enacting a change will think it is. Denying transition relief induces anticipation (e. g. , less overbuilding of homes if tax preferences might be reduced in the future without grandfathering). Anticipation of bad policies is also sometimes desirable (e. g. , FMV-based takings relief in path of an unneeded highway). But suppose we change taxable years from calendar year to 31 March. Don’t double-tax or omit the 3 months’ income! 4

Shaviro, When Rules Change I don’t assume legal change is generally good. But I do assume tax preferences are usually bad (base-broadening, defects of interest group politics). Current law vs. expected future law: (a) median expected change, (b) risk/uncertainty around that expectation. Risk: government should mitigate if people can’t / don’t for themselves (e. g. , ability risk, under-diversified human capital, life expectancy risk, health risk). But not if people sufficiently can & do insure or diversify. And not when people deliberately bet & we let them keep the upside. 5

Transition & expected changes Kaplow story holds insofar as new information -> policy updating (e. g. , lessons of the 2008 financial crisis). But even if change is random (e. g. , cyclical repeal / expansion of tax preferences), we should discourage, not encourage, asymmetric transition bias in favor of tax preference expansion. Hence a proposed rule of thumb against transition relief when the tax base changes. (With further political economy back-up that we can discuss. ) This is not to deny one might grant it sometimes (e. g. , grease the wheels for enacting repeal; home prices in 2010). But not generally or as a matter of right, etc. 6

Back to thesis If you accept this argument, vote FOR thesis! Though not 100% correct (or it would run several pages), surely better than the counter-thesis, with its blind endorsement of “heads I win, tails you lose” pro-tax preference transition policy. But there’s more to transition issues than just tax preferences. Two examples: (a) Income to consumption tax transition (but same analysis for adding a VAT, or just increasing VAT rate!) (b) Replacing WW tax on multinationals’ business income w/ exemption (a la the U. K. & Japan; someday the U. S. ? ). 7

Income to consumption tax transition Replacing i-tax with c-tax = one-time tax on income tax basis. E. g. , say you buy inventory under i-tax on 12/31, sell it under ctax on 1/1. (David Bradford example) Auerbach & Kotlikoff – This is great! Approximates a one-time wealth tax (if not anticipated or expected to recur). Shaviro, When Rules Change – good luck with that: In practice, people may see it coming & expect it again (the logic is infinitely repeatable) – time-consistency problem. Note also that it’s arbitrary (& unrelated to merits of the new policy) like Kaplow’s example of the taxable year change. 8

Raising the VAT rate How American of me to talk about i-tax to c-tax shift. But – The same analysis applies to raising the existing VAT rate! Economic analysis suggests likelihood of a price increase in the amount of the tax (as wages are sticky). This = a one-time wealth tax on anyone with unindexed assets (and a tax on human capital via the effect on real wages). If we allow this, how distinguish tax preference repeal or even Auerbach-Kotlikoff as a matter of principle? (Rather than from looking closely at incentives, expectations, etc. ) 9

Shifting from WW to exemption Countries that shift from WW tax (with deferral) for resident companies to exemption give a transition windfall to those with unrepatriated foreign earnings &/or globally valuable IP. No-one seems to consider taxing away this gain. But isn’t it the same issue in reverse as repealing tax preferences? Note 2 distinct anticipation effects: (a) on residence choices, (b) on repatriation choices. My own tentative view (at least for the U. S. ): (b) has bigger effects, could think of “fair” repatriation tax as credible onetime lump sum levy. 10

Summing up “When disadvantageous changes in tax rules are introduced, taxpayers should not receive transition relief. ” Vote in favor because, taking into account the full set of risk, tax reform, & political economy issues, this is far more persuasive than the asymmetrically anti-base-broadening counter-thesis. Better still, let’s agree that a full analysis of those issues offers a better guide to transition policy than relying on knee-jerk invocations of just one aspect (such as reliance). For academics, how we think about the issues is (or should be) more important than the case-by-case bottom line. 11

Copyright© 2004 South-Western 88 Application: The Costs of

Chapter Application: The Costs of Taxation 8