What is the impact of massmedia in our 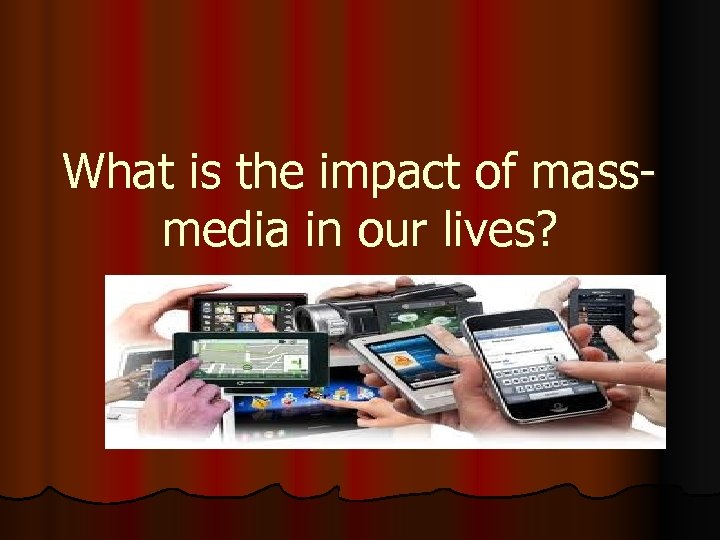 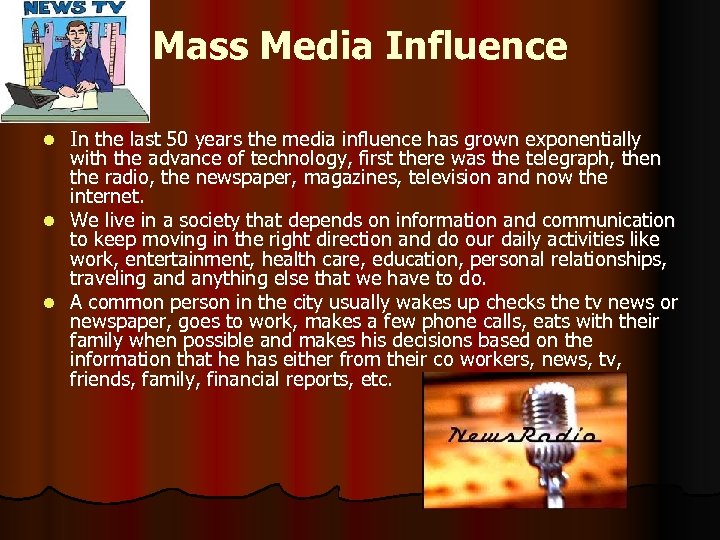 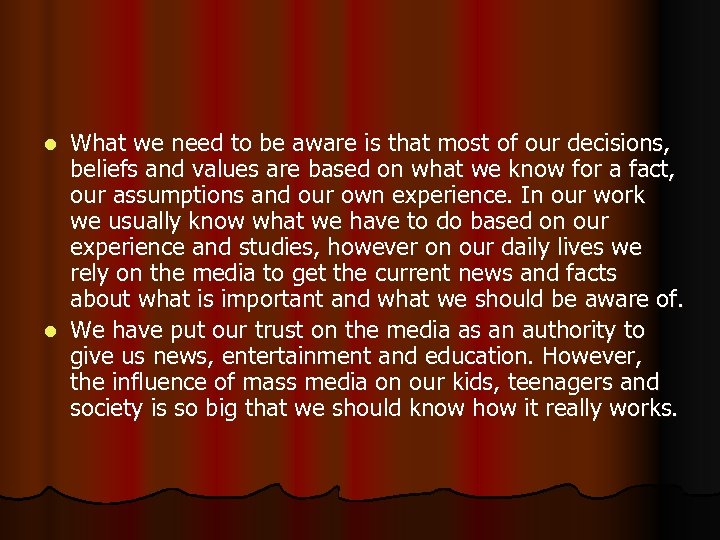 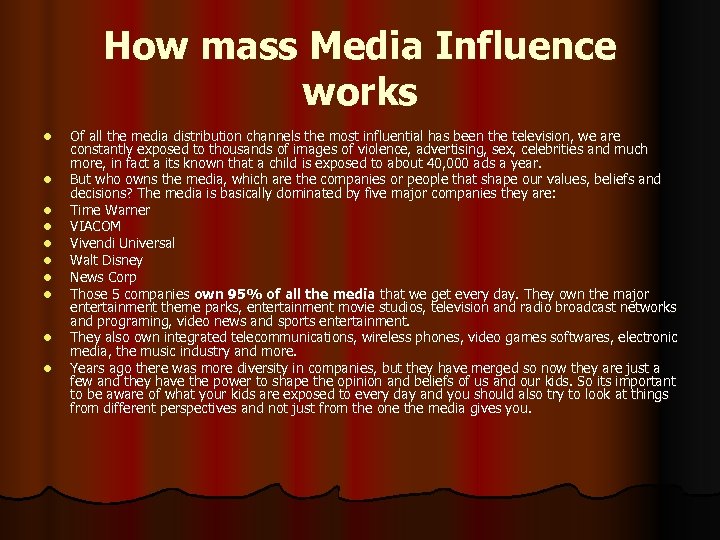 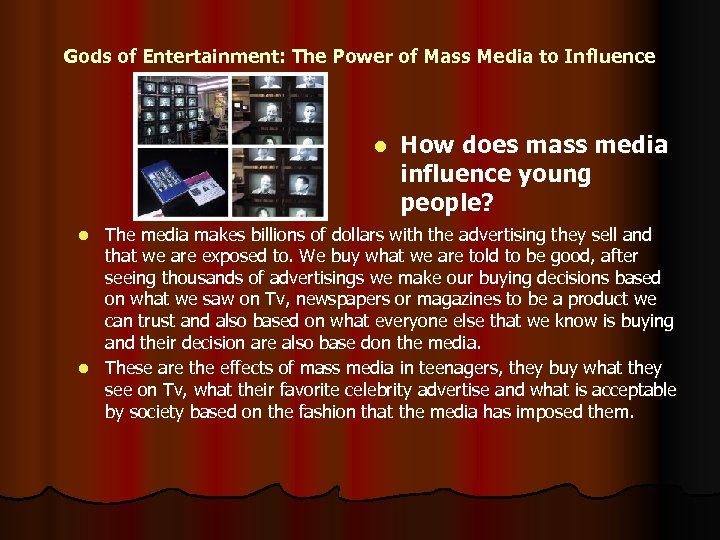 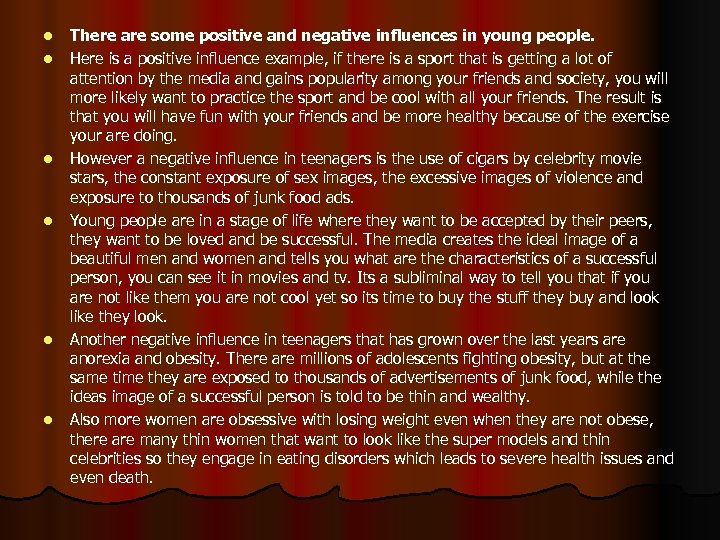 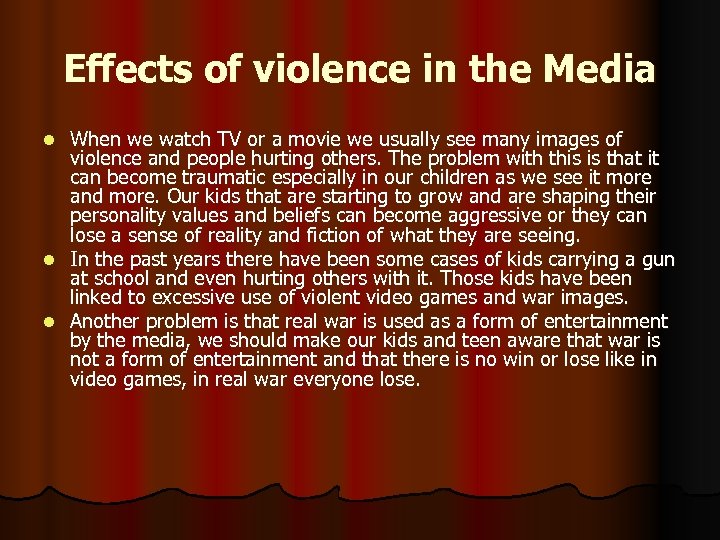 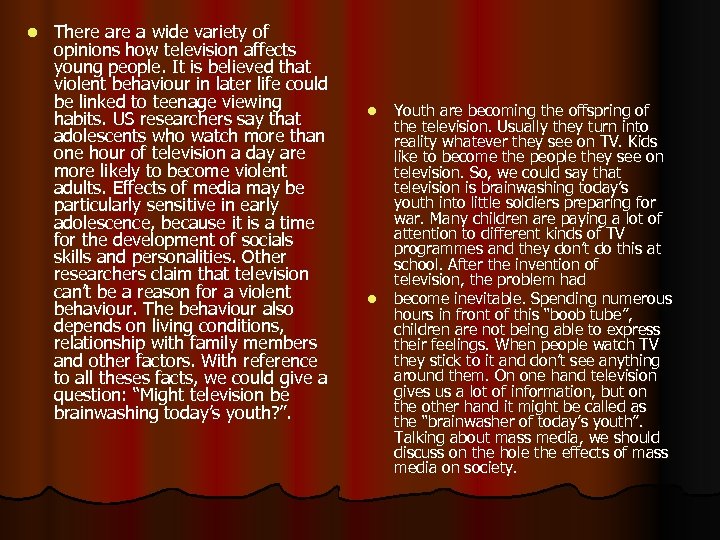 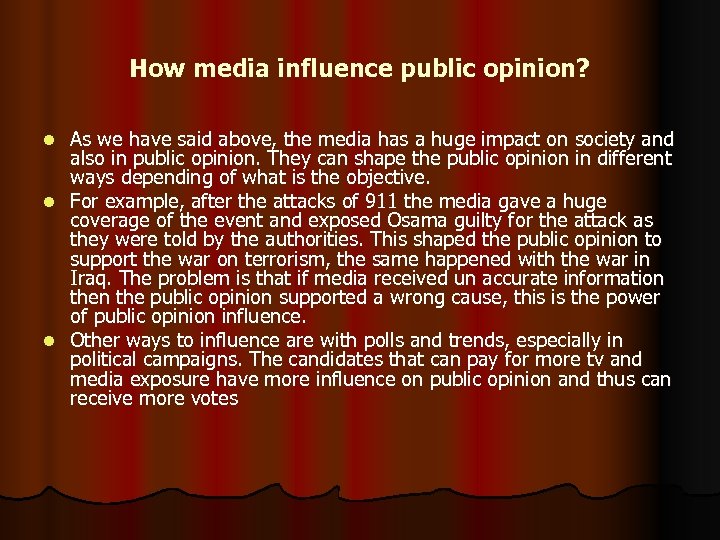 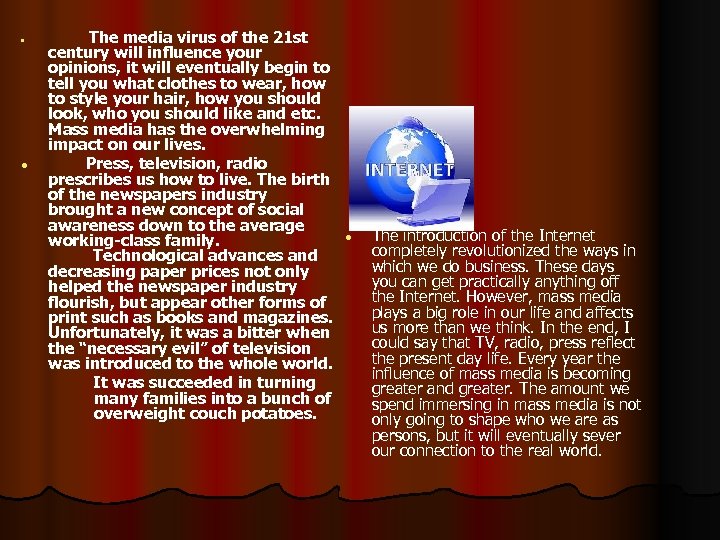 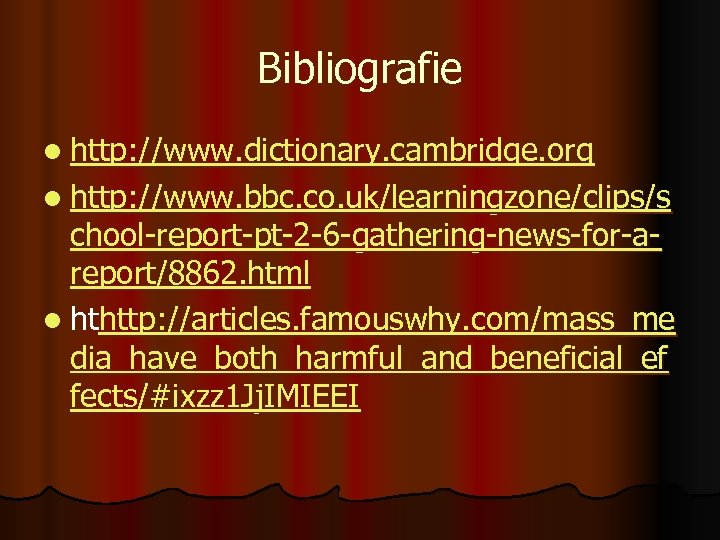 Скачать презентацию What is the impact of massmedia in our

What is the impact of massmedia in our lives?

Mass Media Influence In the last 50 years the media influence has grown exponentially with the advance of technology, first there was the telegraph, then the radio, the newspaper, magazines, television and now the internet. l We live in a society that depends on information and communication to keep moving in the right direction and do our daily activities like work, entertainment, health care, education, personal relationships, traveling and anything else that we have to do. l A common person in the city usually wakes up checks the tv news or newspaper, goes to work, makes a few phone calls, eats with their family when possible and makes his decisions based on the information that he has either from their co workers, news, tv, friends, family, financial reports, etc. l

What we need to be aware is that most of our decisions, beliefs and values are based on what we know for a fact, our assumptions and our own experience. In our work we usually know what we have to do based on our experience and studies, however on our daily lives we rely on the media to get the current news and facts about what is important and what we should be aware of. l We have put our trust on the media as an authority to give us news, entertainment and education. However, the influence of mass media on our kids, teenagers and society is so big that we should know how it really works. l

How mass Media Influence works l l l l l Of all the media distribution channels the most influential has been the television, we are constantly exposed to thousands of images of violence, advertising, sex, celebrities and much more, in fact a its known that a child is exposed to about 40, 000 ads a year. But who owns the media, which are the companies or people that shape our values, beliefs and decisions? The media is basically dominated by five major companies they are: Time Warner VIACOM Vivendi Universal Walt Disney News Corp Those 5 companies own 95% of all the media that we get every day. They own the major entertainment theme parks, entertainment movie studios, television and radio broadcast networks and programing, video news and sports entertainment. They also own integrated telecommunications, wireless phones, video games softwares, electronic media, the music industry and more. Years ago there was more diversity in companies, but they have merged so now they are just a few and they have the power to shape the opinion and beliefs of us and our kids. So its important to be aware of what your kids are exposed to every day and you should also try to look at things from different perspectives and not just from the one the media gives you.

Gods of Entertainment: The Power of Mass Media to Influence l How does mass media influence young people? The media makes billions of dollars with the advertising they sell and that we are exposed to. We buy what we are told to be good, after seeing thousands of advertisings we make our buying decisions based on what we saw on Tv, newspapers or magazines to be a product we can trust and also based on what everyone else that we know is buying and their decision are also base don the media. l These are the effects of mass media in teenagers, they buy what they see on Tv, what their favorite celebrity advertise and what is acceptable by society based on the fashion that the media has imposed them. l

l l l There are some positive and negative influences in young people. Here is a positive influence example, if there is a sport that is getting a lot of attention by the media and gains popularity among your friends and society, you will more likely want to practice the sport and be cool with all your friends. The result is that you will have fun with your friends and be more healthy because of the exercise your are doing. However a negative influence in teenagers is the use of cigars by celebrity movie stars, the constant exposure of sex images, the excessive images of violence and exposure to thousands of junk food ads. Young people are in a stage of life where they want to be accepted by their peers, they want to be loved and be successful. The media creates the ideal image of a beautiful men and women and tells you what are the characteristics of a successful person, you can see it in movies and tv. Its a subliminal way to tell you that if you are not like them you are not cool yet so its time to buy the stuff they buy and look like they look. Another negative influence in teenagers that has grown over the last years are anorexia and obesity. There are millions of adolescents fighting obesity, but at the same time they are exposed to thousands of advertisements of junk food, while the ideas image of a successful person is told to be thin and wealthy. Also more women are obsessive with losing weight even when they are not obese, there are many thin women that want to look like the super models and thin celebrities so they engage in eating disorders which leads to severe health issues and even death.

Effects of violence in the Media When we watch TV or a movie we usually see many images of violence and people hurting others. The problem with this is that it can become traumatic especially in our children as we see it more and more. Our kids that are starting to grow and are shaping their personality values and beliefs can become aggressive or they can lose a sense of reality and fiction of what they are seeing. l In the past years there have been some cases of kids carrying a gun at school and even hurting others with it. Those kids have been linked to excessive use of violent video games and war images. l Another problem is that real war is used as a form of entertainment by the media, we should make our kids and teen aware that war is not a form of entertainment and that there is no win or lose like in video games, in real war everyone lose. l

l There a wide variety of opinions how television affects young people. It is believed that violent behaviour in later life could be linked to teenage viewing habits. US researchers say that adolescents who watch more than one hour of television a day are more likely to become violent adults. Effects of media may be particularly sensitive in early adolescence, because it is a time for the development of socials skills and personalities. Other researchers claim that television can’t be a reason for a violent behaviour. The behaviour also depends on living conditions, relationship with family members and other factors. With reference to all theses facts, we could give a question: “Might television be brainwashing today’s youth? ”. l l Youth are becoming the offspring of the television. Usually they turn into reality whatever they see on TV. Kids like to become the people they see on television. So, we could say that television is brainwashing today’s youth into little soldiers preparing for war. Many children are paying a lot of attention to different kinds of TV programmes and they don’t do this at school. After the invention of television, the problem had become inevitable. Spending numerous hours in front of this “boob tube”, children are not being able to express their feelings. When people watch TV they stick to it and don’t see anything around them. On one hand television gives us a lot of information, but on the other hand it might be called as the “brainwasher of today’s youth”. Talking about mass media, we should discuss on the hole the effects of mass media on society.

How media influence public opinion? As we have said above, the media has a huge impact on society and also in public opinion. They can shape the public opinion in different ways depending of what is the objective. l For example, after the attacks of 911 the media gave a huge coverage of the event and exposed Osama guilty for the attack as they were told by the authorities. This shaped the public opinion to support the war on terrorism, the same happened with the war in Iraq. The problem is that if media received un accurate information the public opinion supported a wrong cause, this is the power of public opinion influence. l Other ways to influence are with polls and trends, especially in political campaigns. The candidates that can pay for more tv and media exposure have more influence on public opinion and thus can receive more votes l

The media virus of the 21 st century will influence your opinions, it will eventually begin to tell you what clothes to wear, how to style your hair, how you should look, who you should like and etc. Mass media has the overwhelming impact on our lives. Press, television, radio prescribes us how to live. The birth of the newspapers industry brought a new concept of social awareness down to the average working-class family. Technological advances and decreasing paper prices not only helped the newspaper industry flourish, but appear other forms of print such as books and magazines. Unfortunately, it was a bitter when the “necessary evil” of television was introduced to the whole world. It was succeeded in turning many families into a bunch of overweight couch potatoes. The introduction of the Internet completely revolutionized the ways in which we do business. These days you can get practically anything off the Internet. However, mass media plays a big role in our life and affects us more than we think. In the end, I could say that TV, radio, press reflect the present day life. Every year the influence of mass media is becoming greater and greater. The amount we spend immersing in mass media is not only going to shape who we are as persons, but it will eventually sever our connection to the real world.