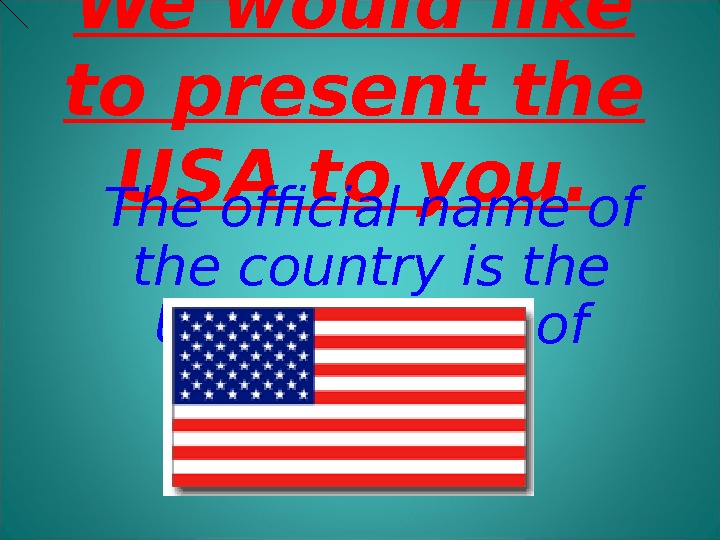 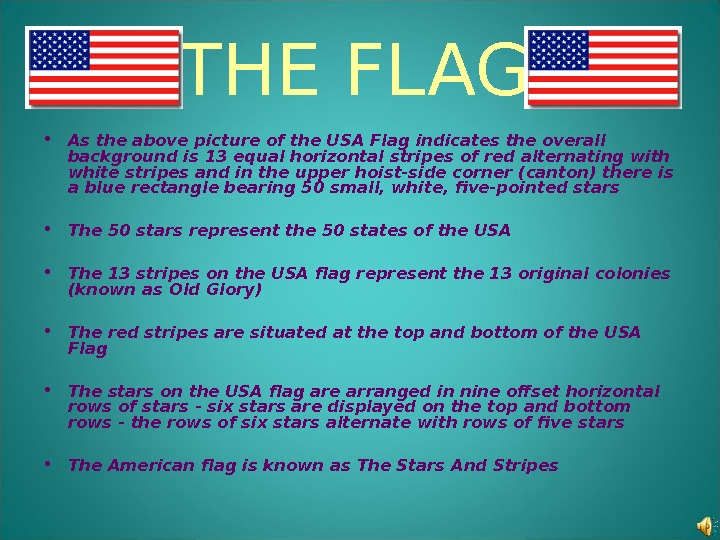 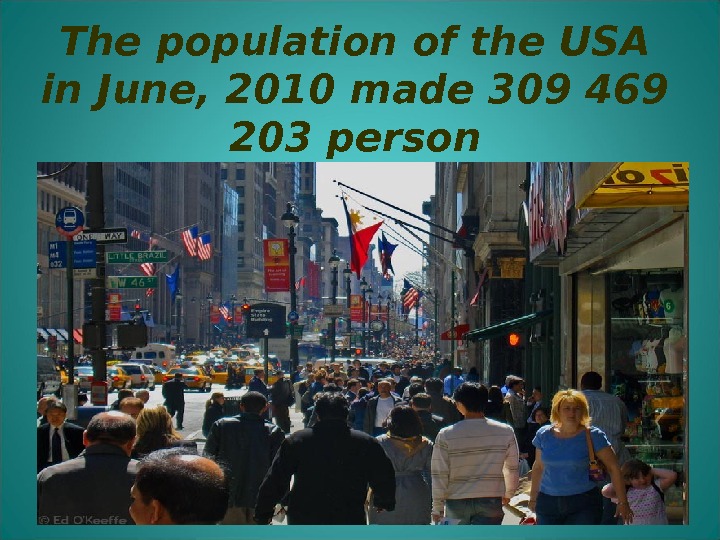 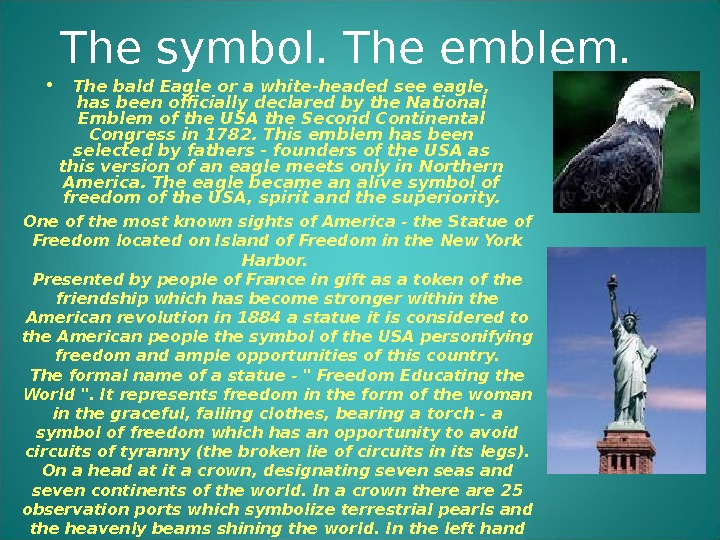 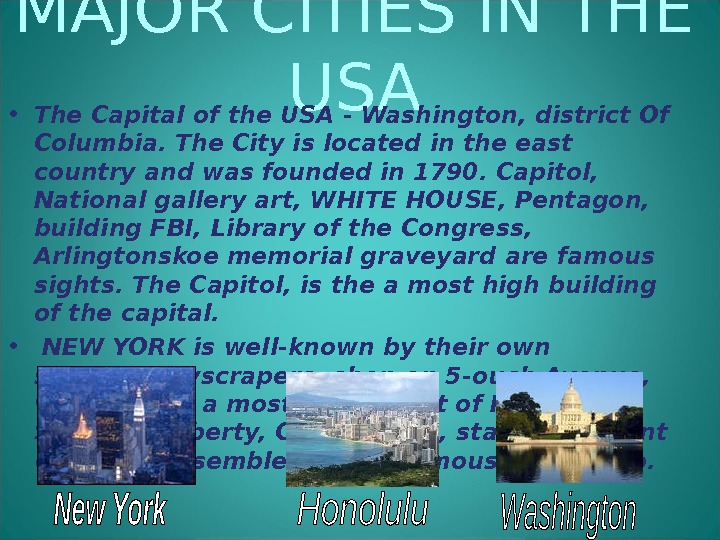 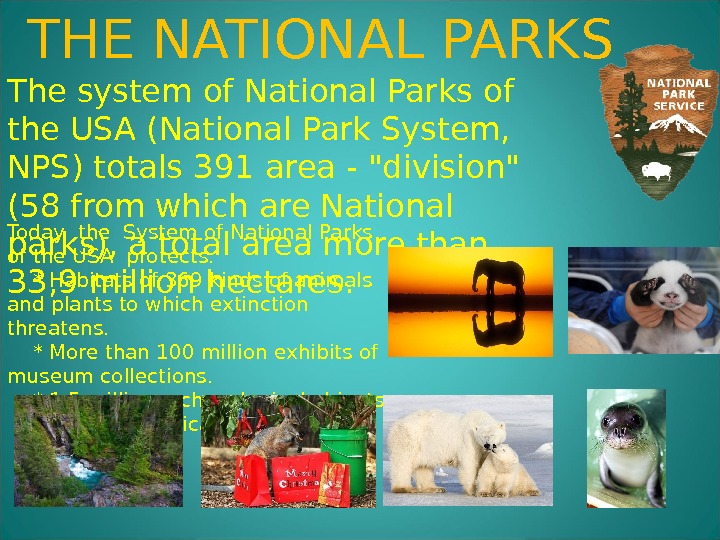 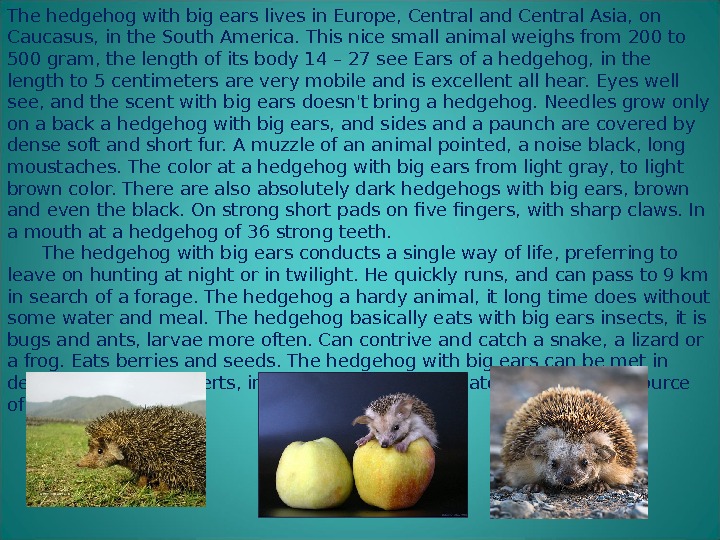 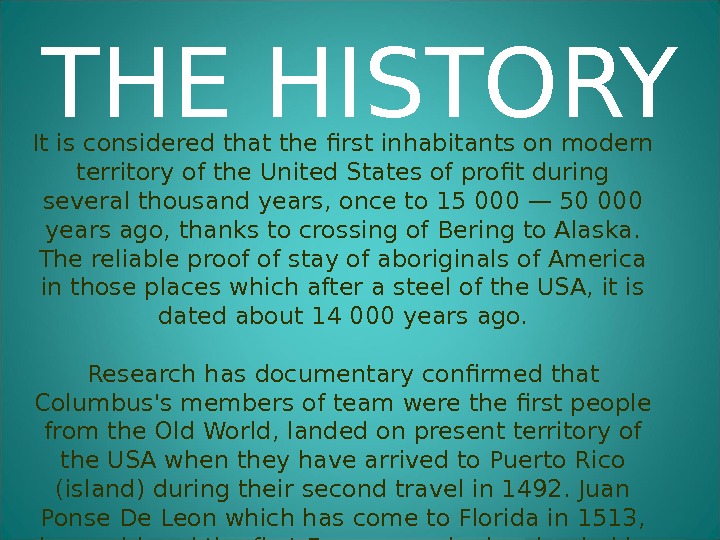 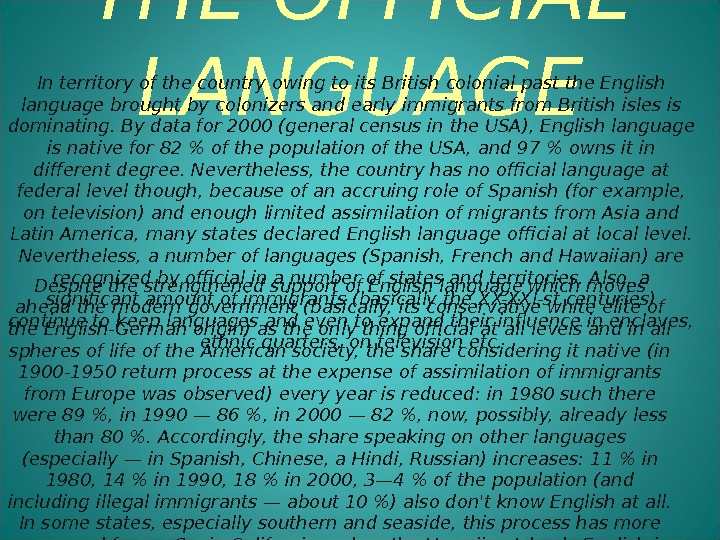 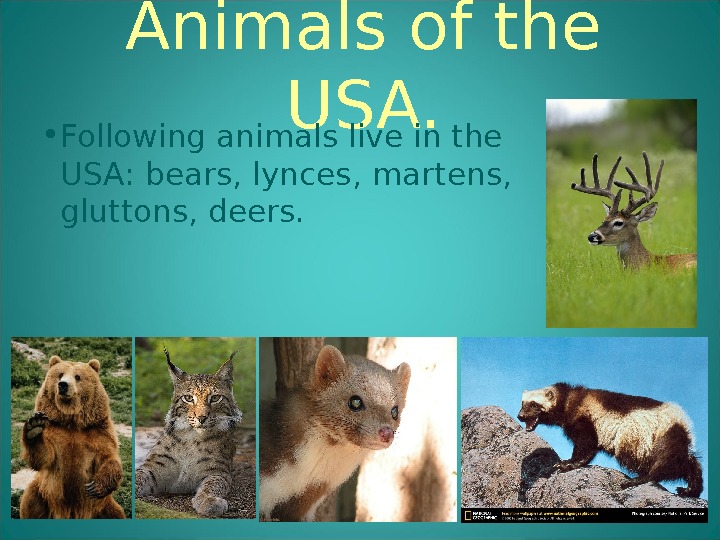 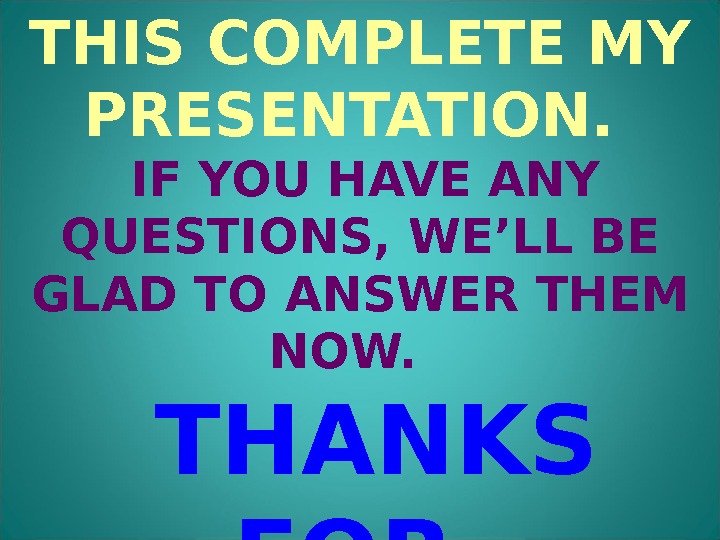 Скачать презентацию We would like to present the USA to

We would like to present the USA to you. The official name of the country is the United States of America.

THE FLAG • As the above picture of the USA Flag indicates the overall background is 13 equal horizontal stripes of red alternating with white stripes and in the upper hoist-side corner (canton) there is a blue rectangle bearing 50 small, white, five-pointed stars • The 50 stars represent the 50 states of the USA • The 13 stripes on the USA flag represent the 13 original colonies (known as Old Glory) • The red stripes are situated at the top and bottom of the USA Flag • The stars on the USA flag are arranged in nine offset horizontal rows of stars — six stars are displayed on the top and bottom rows — the rows of six stars alternate with rows of five stars • The American flag is known as The Stars And Stripes

THE AREA IS 9, 4 MILLION SQUARE KILOMETERS

The symbol. The emblem. • The bald Eagle or a white-headed see eagle, has been officially declared by the National Emblem of the USA the Second Continental Congress in 1782. This emblem has been selected by fathers — founders of the USA as this version of an eagle meets only in Northern America. The eagle became an alive symbol of freedom of the USA, spirit and the superiority. One of the most known sights of America — the Statue of Freedom located on Island of Freedom in the New York Harbor. Presented by people of France in gift as a token of the friendship which has become stronger within the American revolution in 1884 a statue it is considered to the American people the symbol of the USA personifying freedom and ample opportunities of this country. The formal name of a statue — » Freedom Educating the World «. It represents freedom in the form of the woman in the graceful, falling clothes, bearing a torch — a symbol of freedom which has an opportunity to avoid circuits of tyranny (the broken lie of circuits in its legs). On a head at it a crown, designating seven seas and seven continents of the world. In a crown there are 25 observation ports which symbolize terrestrial pearls and the heavenly beams shining the world. In the left hand the woman holds a plate with the date of the American Declaration of Independence put on it — on July, 4 th,

MAJOR CITIES IN THE USA • The Capital of the USA — Washington, district Of Columbia. The City is located in the east country and was founded in 1790. Capitol, National gallery art, WHITE HOUSE, Pentagon, building FBI, Library of the Congress, Arlingtonskoe memorial graveyard are famous sights. The Capitol, is the a most high building of the capital. • NEW YORK is well-known by their own splendid skyscrapers, shop on 5 -ouch Avenue, which is the a most long street of NEW YORK. Statue of Liberty, Central Park, staff-apartment UNO and ensemble the are famous sights too.

It is considered that the first inhabitants on modern territory of the United States of profit during several thousand years, once to 15 000 — 50 000 years ago, thanks to crossing of Bering to Alaska. The reliable proof of stay of aboriginals of America in those places which after a steel of the USA, it is dated about 14 000 years ago. Research has documentary confirmed that Columbus’s members of team were the first people from the Old World, landed on present territory of the USA when they have arrived to Puerto Rico (island) during their second travel in 1492. Juan Ponse De Leon which has come to Florida in 1513, is considered the first European who has landed in territory of the continental United States, despite offered that proof that in 1498 John Kabot could reach territories which now is New England. THE HISTORY

THE OFFICIAL LANGUAGEIn territory of the country owing to its British colonial past the English language brought by colonizers and early immigrants from British isles is dominating. By data for 2000 (general census in the USA), English language is native for 82 % of the population of the USA, and 97 % owns it in different degree. Nevertheless, the country has no official language at federal level though, because of an accruing role of Spanish (for example, on television) and enough limited assimilation of migrants from Asia and Latin America, many states declared English language official at local level. Nevertheless, a number of languages (Spanish, French and Hawaiian) are recognized by official in a number of states and territories. Also, a significant amount of immigrants (basically the XX-XXI-st centuries) continue to keep languages and even to expand their influence in enclaves, ethnic quarters, on television etc. Despite the strengthened support of English language which moves ahead the modern government (basically, its conservative white elite of the English-German origin) as the only thing official at all levels and in all spheres of life of the American society, the share considering it native (in 1900 -1950 return process at the expense of assimilation of immigrants from Europe was observed) every year is reduced: in 1980 such there were 89 %, in 1990 — 86 %, in 2000 — 82 %, now, possibly, already less than 80 %. Accordingly, the share speaking on other languages (especially — in Spanish, Chinese, a Hindi, Russian) increases: 11 % in 1980, 14 % in 1990, 18 % in 2000, 3— 4 % of the population (and including illegal immigrants — about 10 %) also don’t know English at all. In some states, especially southern and seaside, this process has more expressed forms. So, in California and on the Hawaiian Islands English is native only for 58 % of the population, the Spanish language, especially in frontier regions began to be used much more widely.

THIS COMPLETE MY PRESENTATION. IF YOU HAVE ANY QUESTIONS, WE’LL BE GLAD TO ANSWER THEM NOW. THANKS FOR ATTENTION