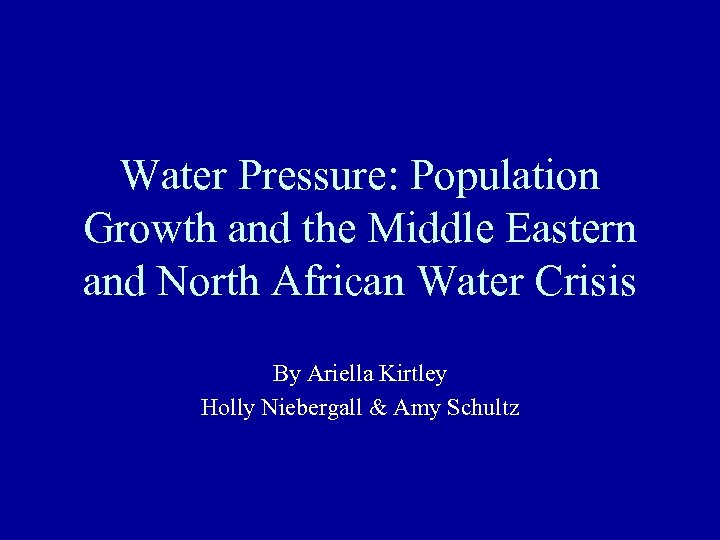 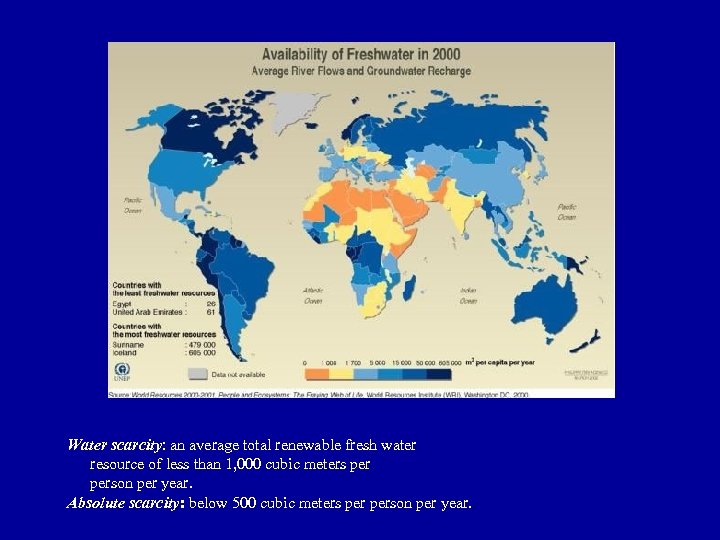 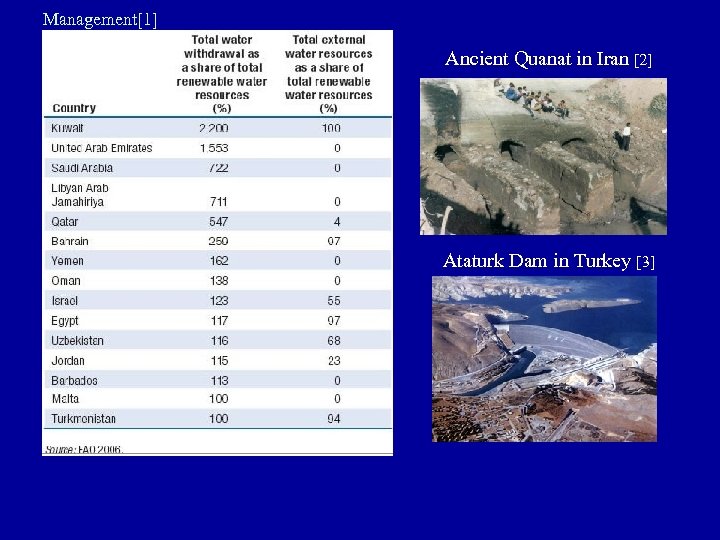 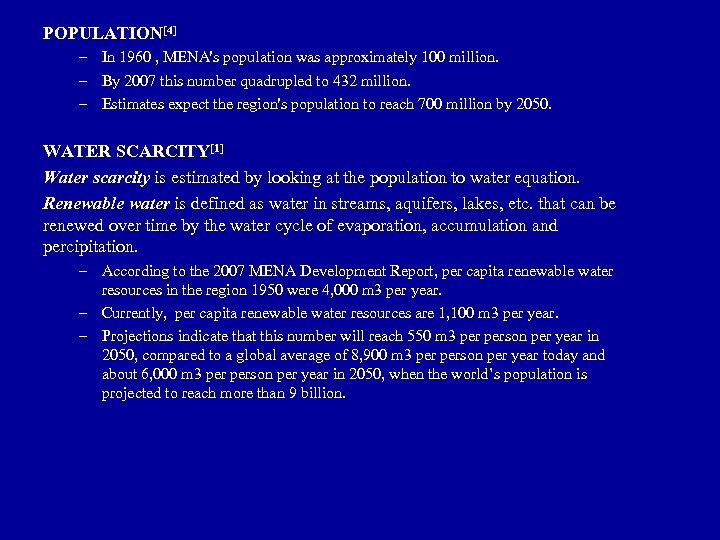 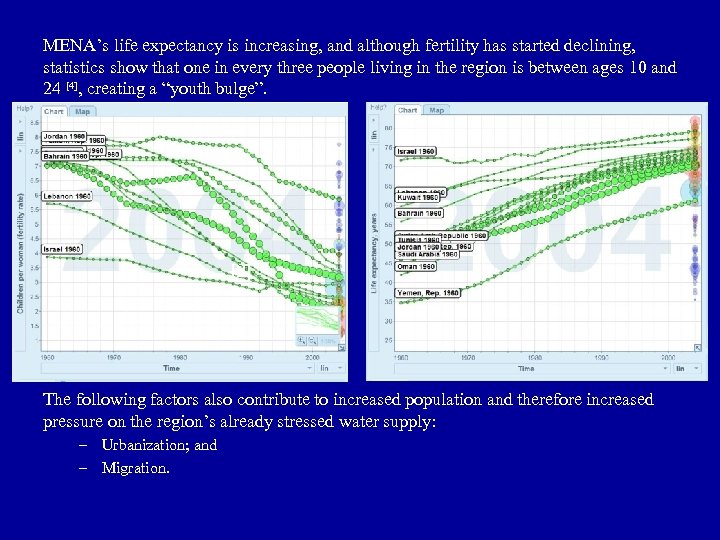 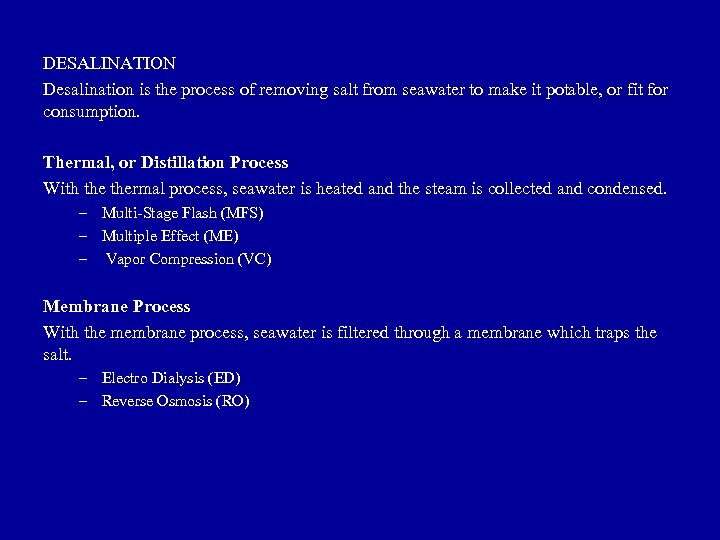 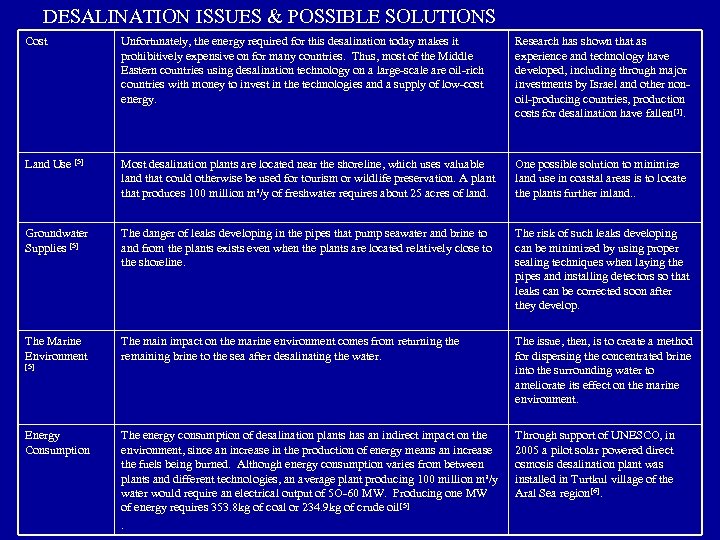 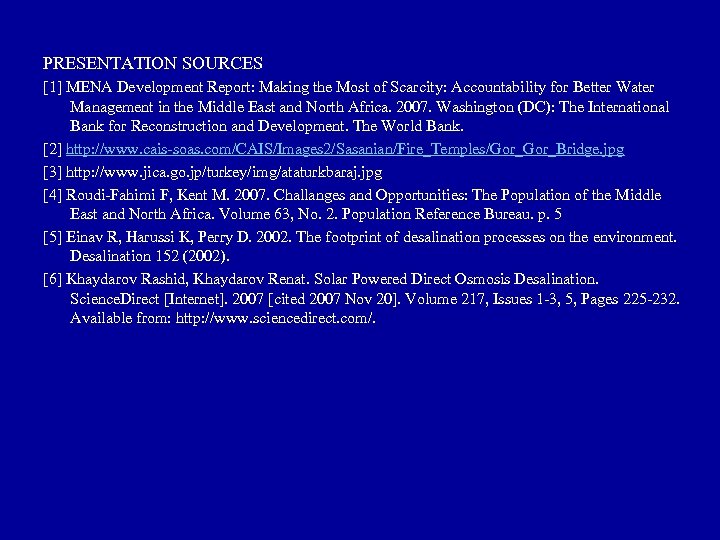 POPULATION[4] – In 1960 , MENA's population was approximately 100 million. – By 2007 this number quadrupled to 432 million. – Estimates expect the region's population to reach 700 million by 2050. WATER SCARCITY[1] Water scarcity is estimated by looking at the population to water equation. Renewable water is defined as water in streams, aquifers, lakes, etc. that can be renewed over time by the water cycle of evaporation, accumulation and percipitation. – According to the 2007 MENA Development Report, per capita renewable water resources in the region 1950 were 4, 000 m 3 per year. – Currently, per capita renewable water resources are 1, 100 m 3 per year. – Projections indicate that this number will reach 550 m 3 person per year in 2050, compared to a global average of 8, 900 m 3 person per year today and about 6, 000 m 3 person per year in 2050, when the world’s population is projected to reach more than 9 billion.

MENA’s life expectancy is increasing, and although fertility has started declining, statistics show that one in every three people living in the region is between ages 10 and 24 [4], creating a “youth bulge”. [2] The following factors also contribute to increased population and therefore increased pressure on the region’s already stressed water supply: – Urbanization; and – Migration.

DESALINATION Desalination is the process of removing salt from seawater to make it potable, or fit for consumption. Thermal, or Distillation Process With thermal process, seawater is heated and the steam is collected and condensed. – Multi-Stage Flash (MFS) – Multiple Effect (ME) – Vapor Compression (VC) Membrane Process With the membrane process, seawater is filtered through a membrane which traps the salt. – Electro Dialysis (ED) – Reverse Osmosis (RO)

DESALINATION ISSUES & POSSIBLE SOLUTIONS Cost Unfortunately, the energy required for this desalination today makes it prohibitively expensive on for many countries. Thus, most of the Middle Eastern countries using desalination technology on a large-scale are oil-rich countries with money to invest in the technologies and a supply of low-cost energy. Research has shown that as experience and technology have developed, including through major investments by Israel and other nonoil-producing countries, production costs for desalination have fallen [1]. Land Use [5] Most desalination plants are located near the shoreline, which uses valuable land that could otherwise be used for tourism or wildlife preservation. A plant that produces 100 million m³/y of freshwater requires about 25 acres of land. One possible solution to minimize land use in coastal areas is to locate the plants further inland. . Groundwater Supplies [5] The danger of leaks developing in the pipes that pump seawater and brine to and from the plants exists even when the plants are located relatively close to the shoreline. The risk of such leaks developing can be minimized by using proper sealing techniques when laying the pipes and installing detectors so that leaks can be corrected soon after they develop. The Marine Environment The main impact on the marine environment comes from returning the remaining brine to the sea after desalinating the water. The issue, then, is to create a method for dispersing the concentrated brine into the surrounding water to ameliorate its effect on the marine environment. Energy Consumption The energy consumption of desalination plants has an indirect impact on the environment, since an increase in the production of energy means an increase the fuels being burned. Although energy consumption varies from between plants and different technologies, an average plant producing 100 million m³/y water would require an electrical output of 5 O-60 MW. Producing one MW of energy requires 353. 8 kg of coal or 234. 9 kg of crude oil [5]. Through support of UNESCO, in 2005 a pilot solar powered direct osmosis desalination plant was installed in Turtkul village of the Aral Sea region[6]. [5]