Water Crisis in Gaza Strip A study of 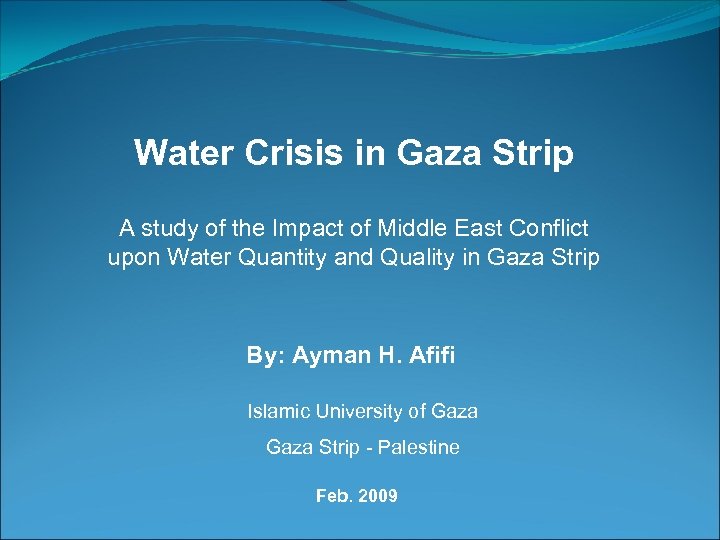 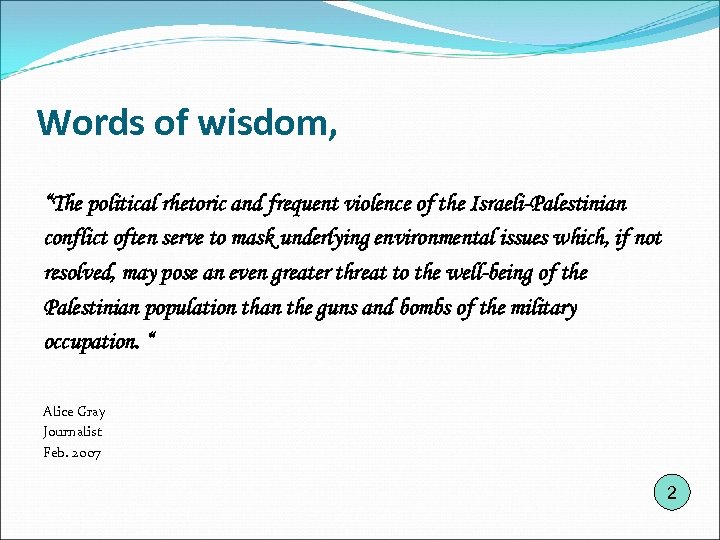 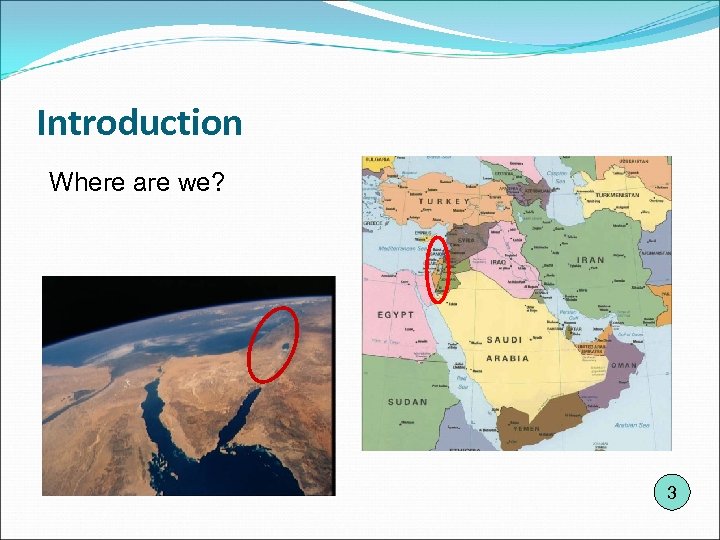 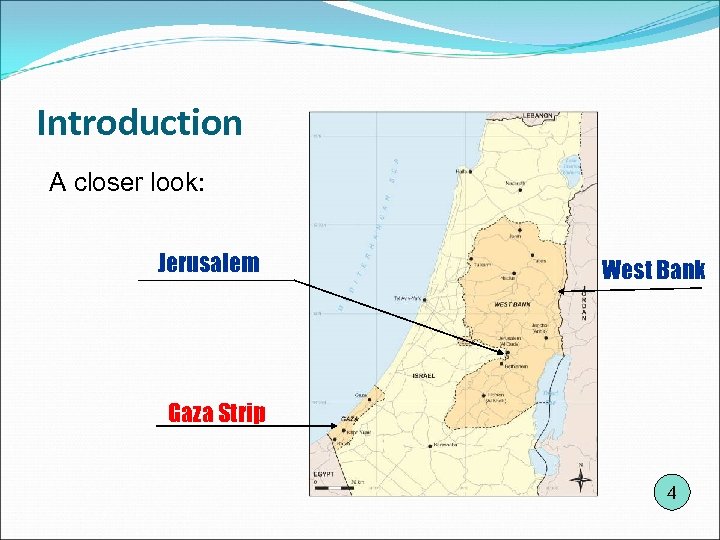 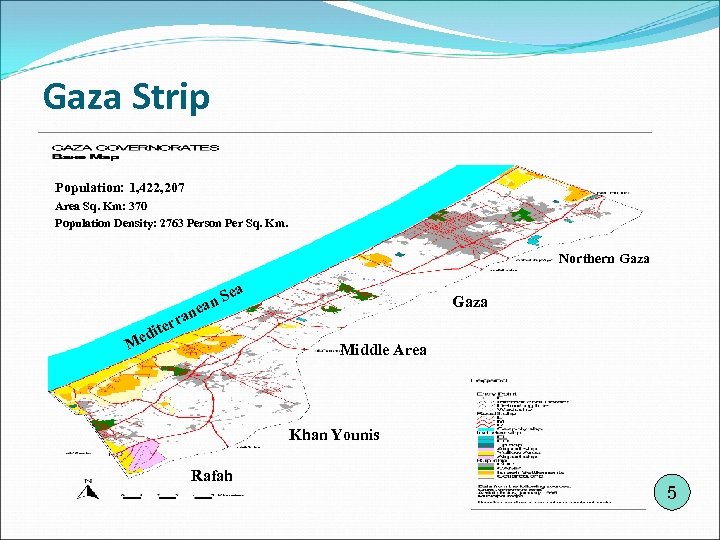 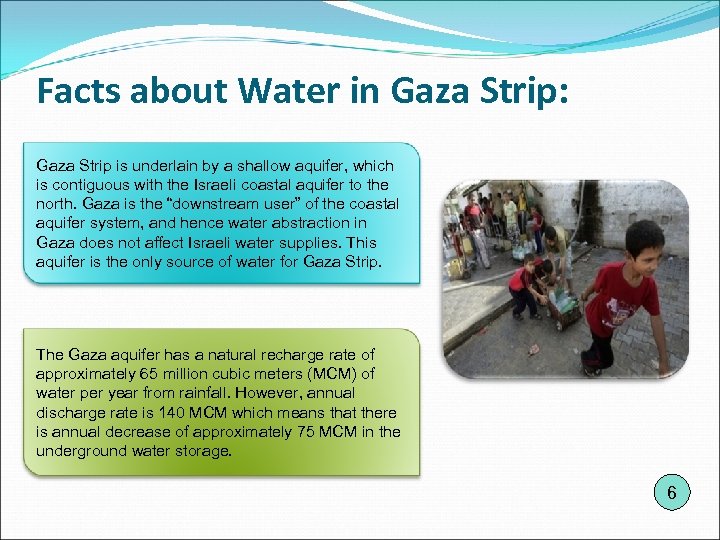 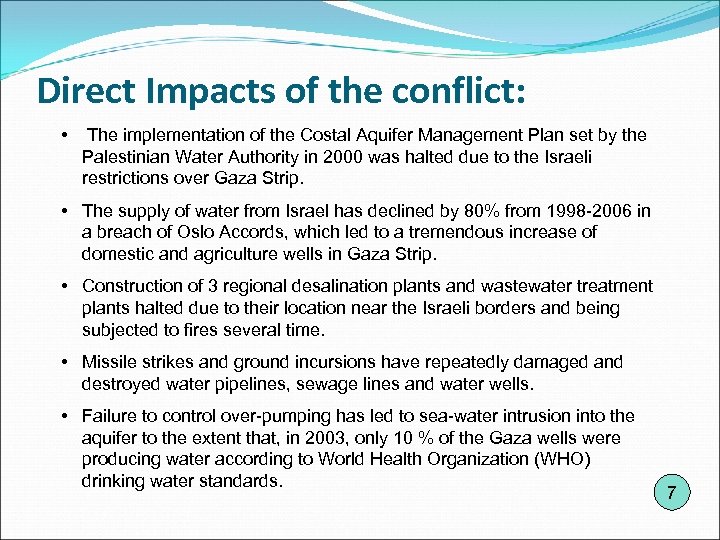 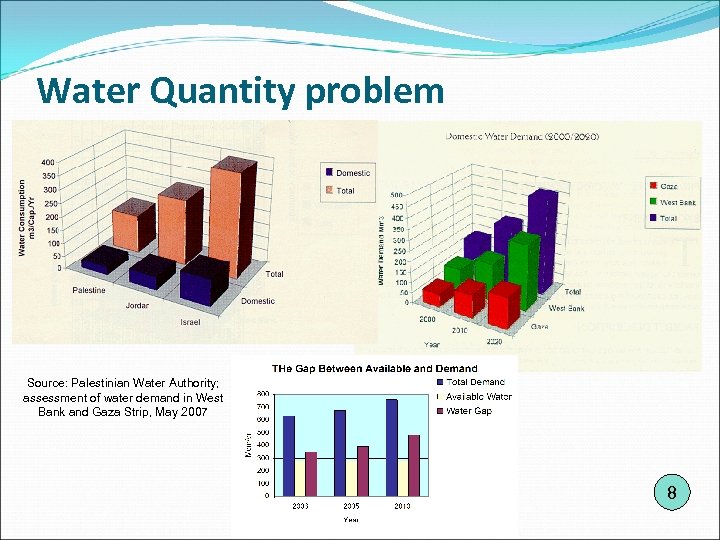 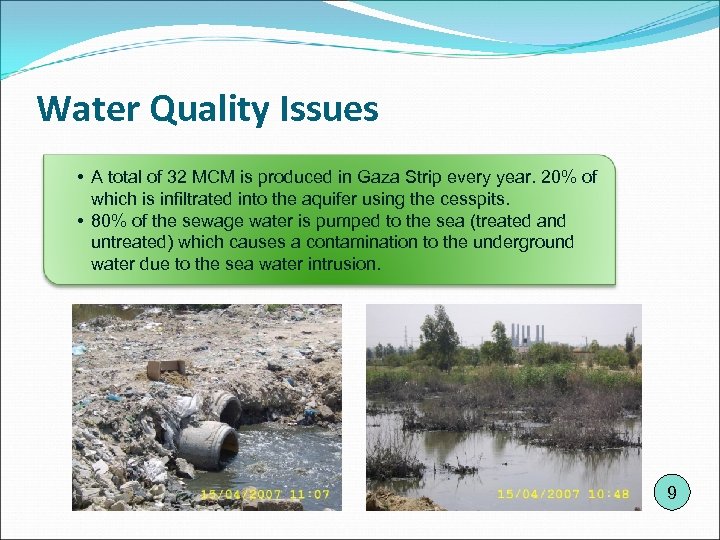 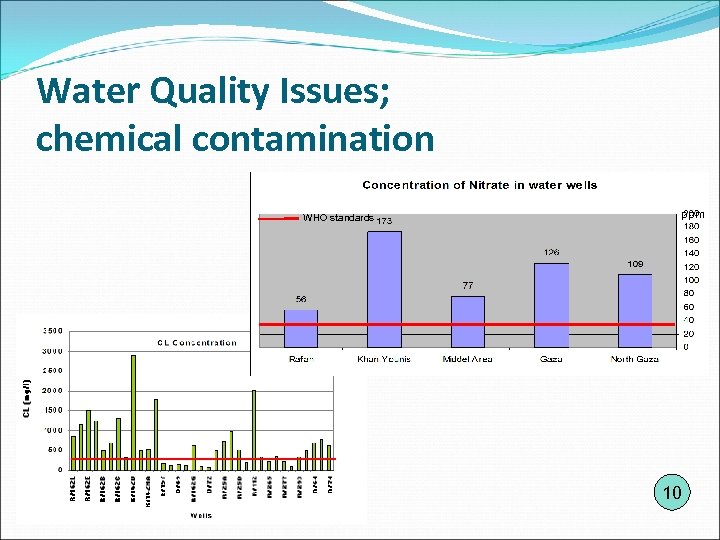 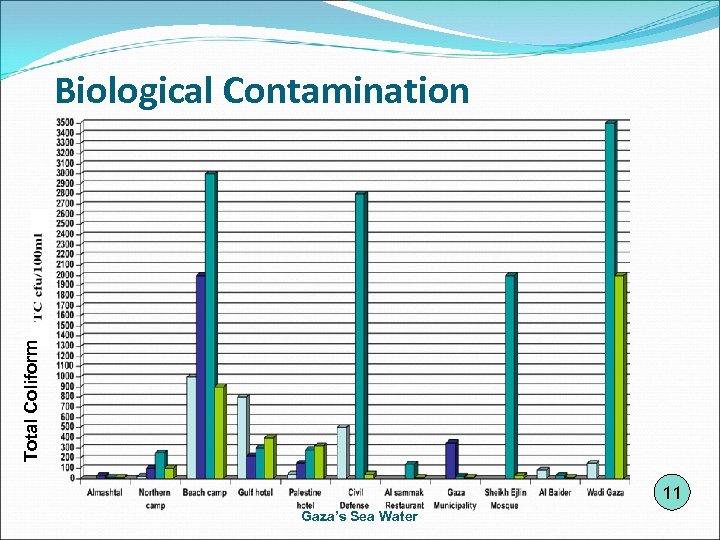 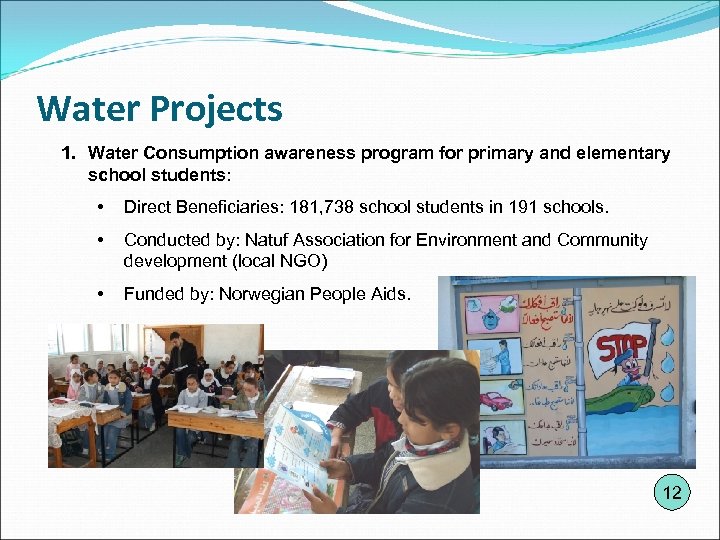 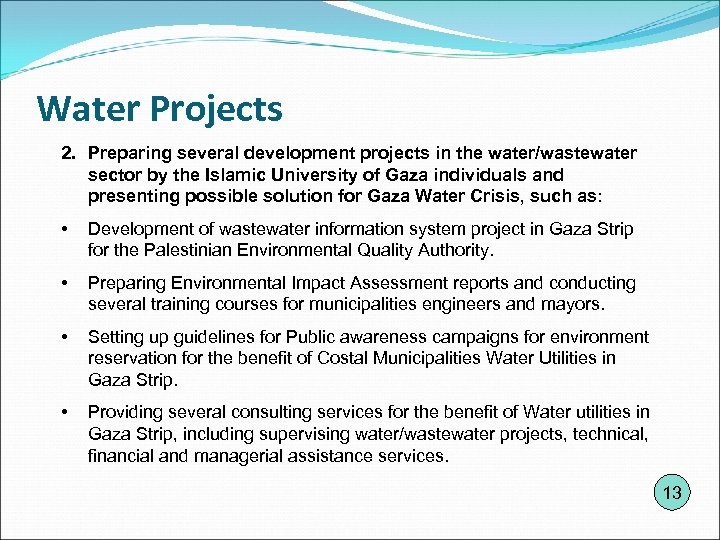 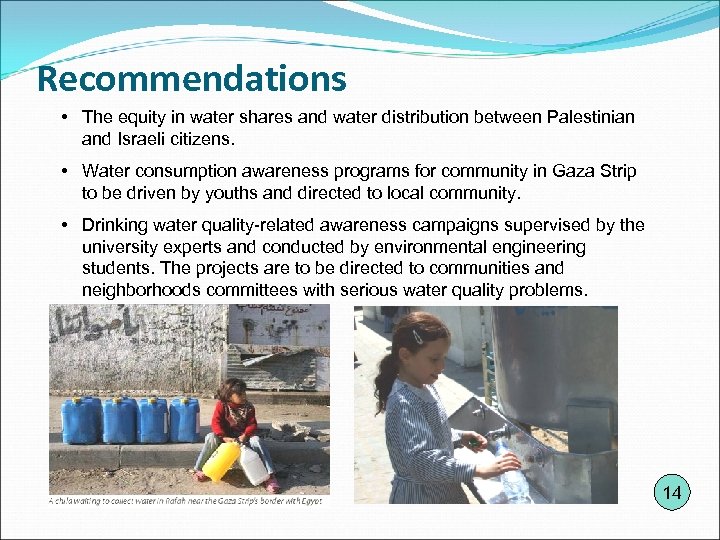 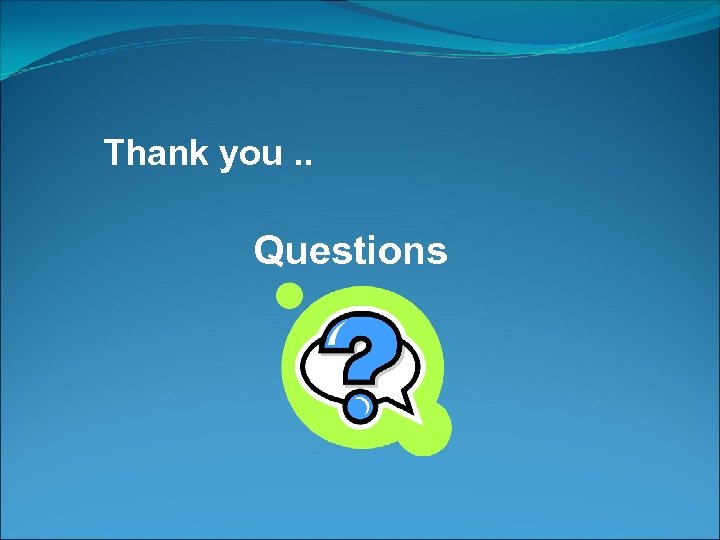 Скачать презентацию Water Crisis in Gaza Strip A study of

Water Crisis in Gaza Strip A study of the Impact of Middle East Conflict upon Water Quantity and Quality in Gaza Strip By: Ayman H. Afifi Islamic University of Gaza Strip - Palestine Feb. 2009

Words of wisdom, “The political rhetoric and frequent violence of the Israeli-Palestinian conflict often serve to mask underlying environmental issues which, if not resolved, may pose an even greater threat to the well-being of the Palestinian population than the guns and bombs of the military occupation. “ Alice Gray Journalist Feb. 2007 2

Introduction Where are we? 3

Facts about Water in Gaza Strip: Gaza Strip is underlain by a shallow aquifer, which is contiguous with the Israeli coastal aquifer to the north. Gaza is the “downstream user” of the coastal aquifer system, and hence water abstraction in Gaza does not affect Israeli water supplies. This aquifer is the only source of water for Gaza Strip. The Gaza aquifer has a natural recharge rate of approximately 65 million cubic meters (MCM) of water per year from rainfall. However, annual discharge rate is 140 MCM which means that there is annual decrease of approximately 75 MCM in the underground water storage. 6

Direct Impacts of the conflict: • The implementation of the Costal Aquifer Management Plan set by the Palestinian Water Authority in 2000 was halted due to the Israeli restrictions over Gaza Strip. • The supply of water from Israel has declined by 80% from 1998 -2006 in a breach of Oslo Accords, which led to a tremendous increase of domestic and agriculture wells in Gaza Strip. • Construction of 3 regional desalination plants and wastewater treatment plants halted due to their location near the Israeli borders and being subjected to fires several time. • Missile strikes and ground incursions have repeatedly damaged and destroyed water pipelines, sewage lines and water wells. • Failure to control over-pumping has led to sea-water intrusion into the aquifer to the extent that, in 2003, only 10 % of the Gaza wells were producing water according to World Health Organization (WHO) drinking water standards. 7

Water Quality Issues • A total of 32 MCM is produced in Gaza Strip every year. 20% of which is infiltrated into the aquifer using the cesspits. • 80% of the sewage water is pumped to the sea (treated and untreated) which causes a contamination to the underground water due to the sea water intrusion. 9

Recommendations • The equity in water shares and water distribution between Palestinian and Israeli citizens. • Water consumption awareness programs for community in Gaza Strip to be driven by youths and directed to local community. • Drinking water quality-related awareness campaigns supervised by the university experts and conducted by environmental engineering students. The projects are to be directed to communities and neighborhoods committees with serious water quality problems. 14

1 CALCULATIONS FOR NAF BASE MUDS 2