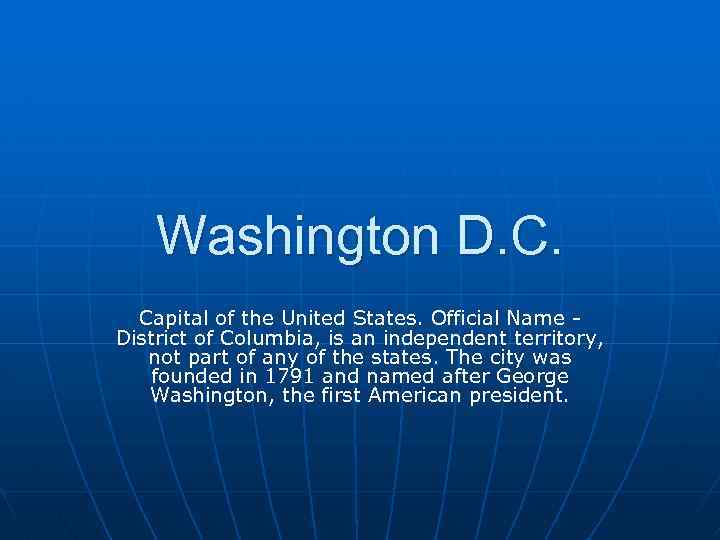 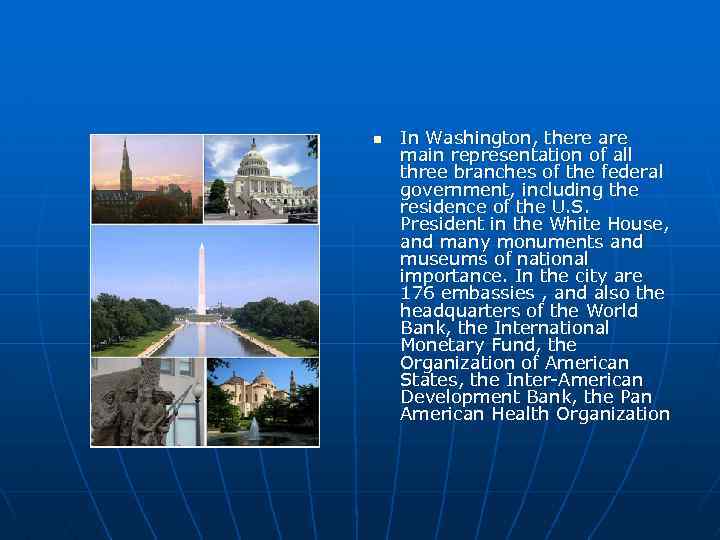 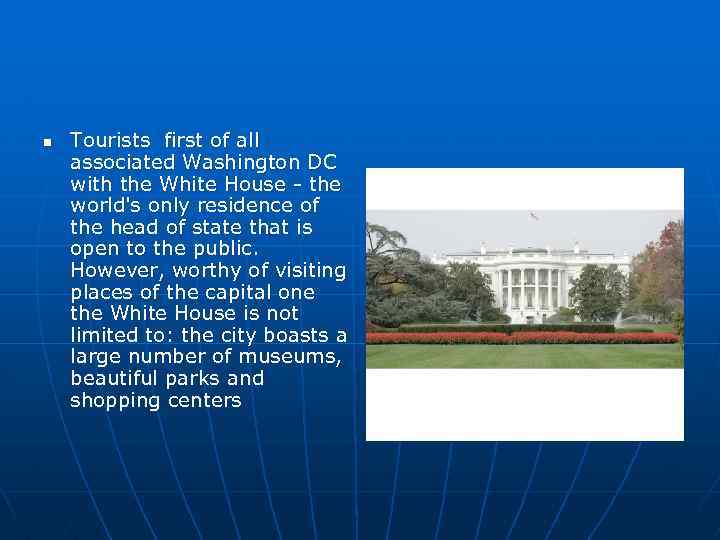 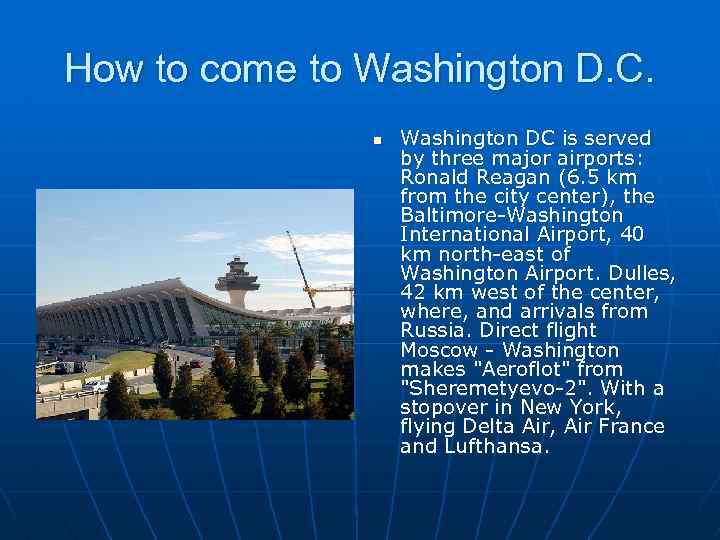 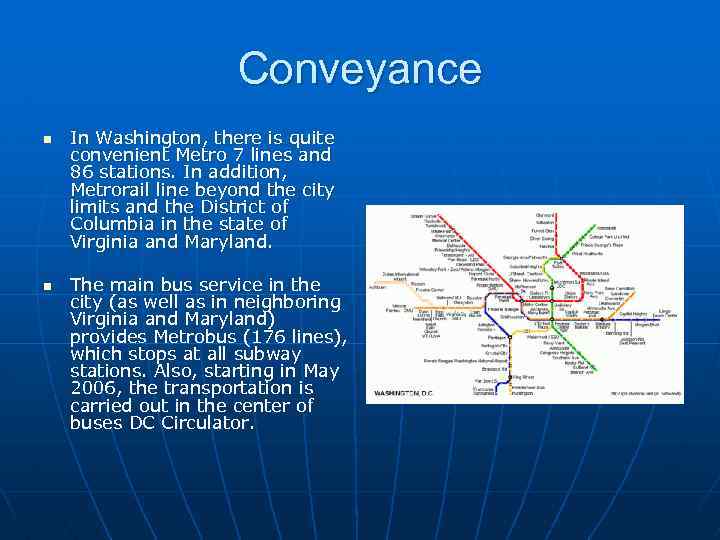 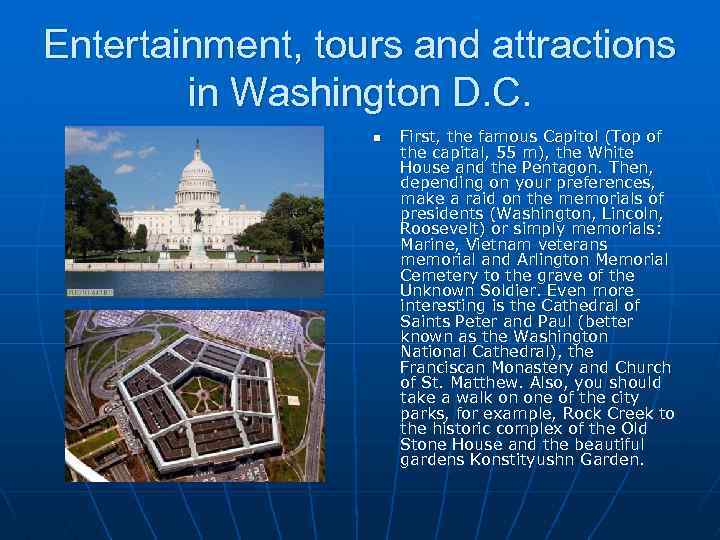 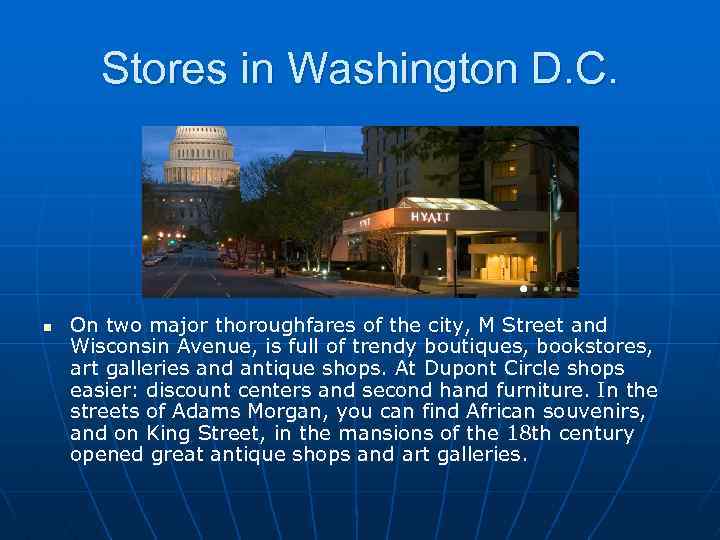 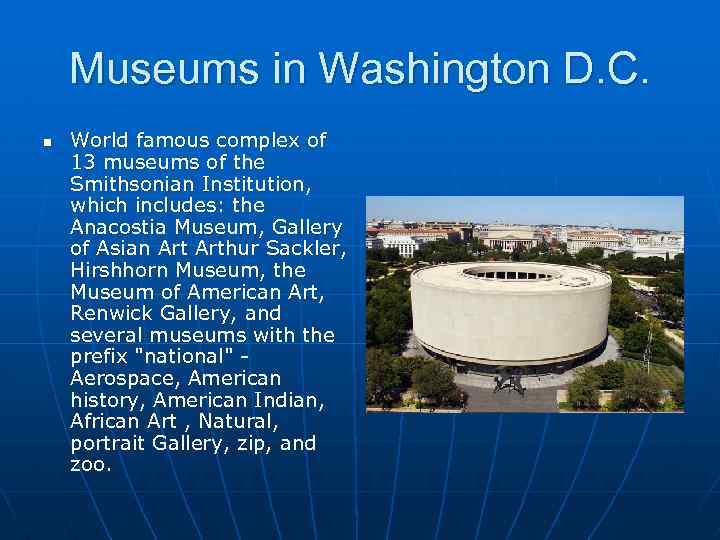 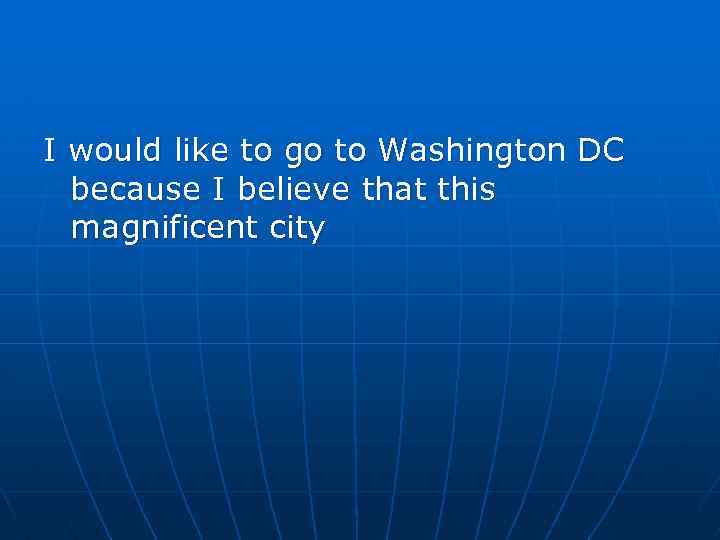 Washington D. C. Capital of the United States. Official Name District of Columbia, is an independent territory, not part of any of the states. The city was founded in 1791 and named after George Washington, the first American president.

n In Washington, there are main representation of all three branches of the federal government, including the residence of the U. S. President in the White House, and many monuments and museums of national importance. In the city are 176 embassies , and also the headquarters of the World Bank, the International Monetary Fund, the Organization of American States, the Inter-American Development Bank, the Pan American Health Organization

n Tourists first of all associated Washington DC with the White House - the world's only residence of the head of state that is open to the public. However, worthy of visiting places of the capital one the White House is not limited to: the city boasts a large number of museums, beautiful parks and shopping centers

Conveyance n n In Washington, there is quite convenient Metro 7 lines and 86 stations. In addition, Metrorail line beyond the city limits and the District of Columbia in the state of Virginia and Maryland. The main bus service in the city (as well as in neighboring Virginia and Maryland) provides Metrobus (176 lines), which stops at all subway stations. Also, starting in May 2006, the transportation is carried out in the center of buses DC Circulator.

Entertainment, tours and attractions in Washington D. C. n First, the famous Capitol (Top of the capital, 55 m), the White House and the Pentagon. Then, depending on your preferences, make a raid on the memorials of presidents (Washington, Lincoln, Roosevelt) or simply memorials: Marine, Vietnam veterans memorial and Arlington Memorial Cemetery to the grave of the Unknown Soldier. Even more interesting is the Cathedral of Saints Peter and Paul (better known as the Washington National Cathedral), the Franciscan Monastery and Church of St. Matthew. Also, you should take a walk on one of the city parks, for example, Rock Creek to the historic complex of the Old Stone House and the beautiful gardens Konstityushn Garden.

Stores in Washington D. C. n On two major thoroughfares of the city, M Street and Wisconsin Avenue, is full of trendy boutiques, bookstores, art galleries and antique shops. At Dupont Circle shops easier: discount centers and second hand furniture. In the streets of Adams Morgan, you can find African souvenirs, and on King Street, in the mansions of the 18 th century opened great antique shops and art galleries.

n In addition, in the area of interest: Arts Center Arena Stage, art gallery with a garden sculpture, Museum of Women in Art, Corcoran Gallery and the Phillips Collection, the private International Spy Museum and the Holocaust Memorial Museum.