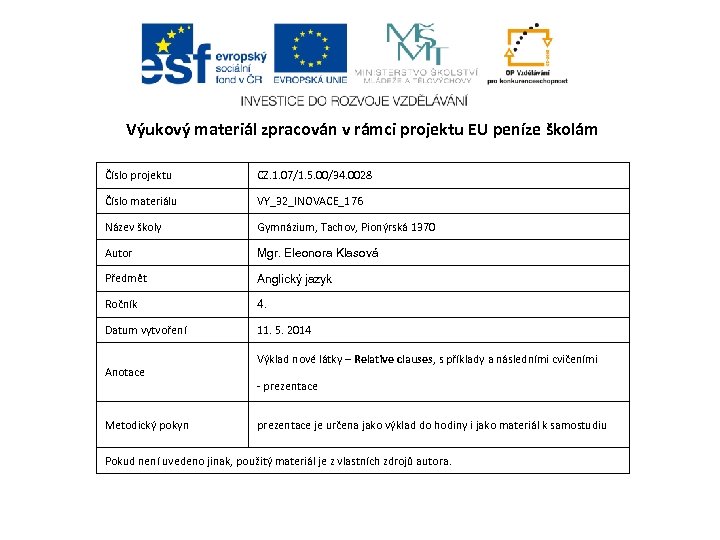 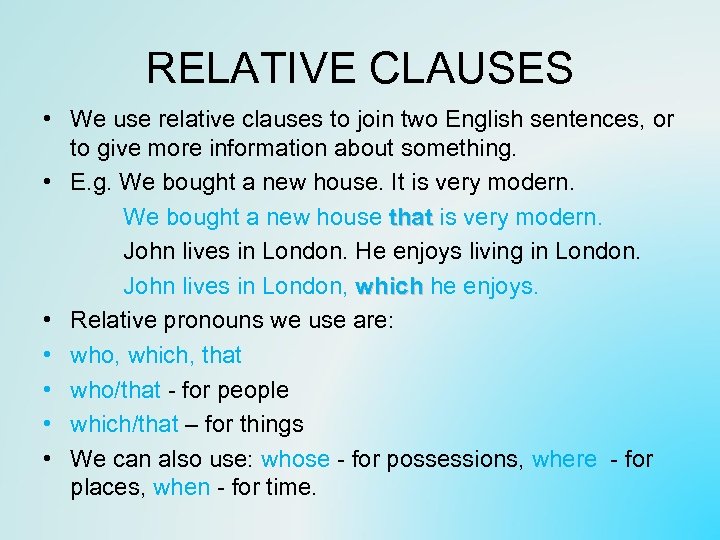 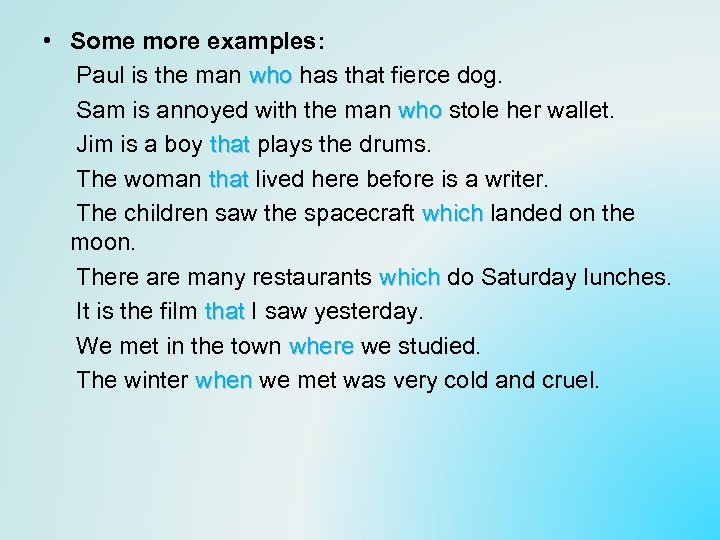 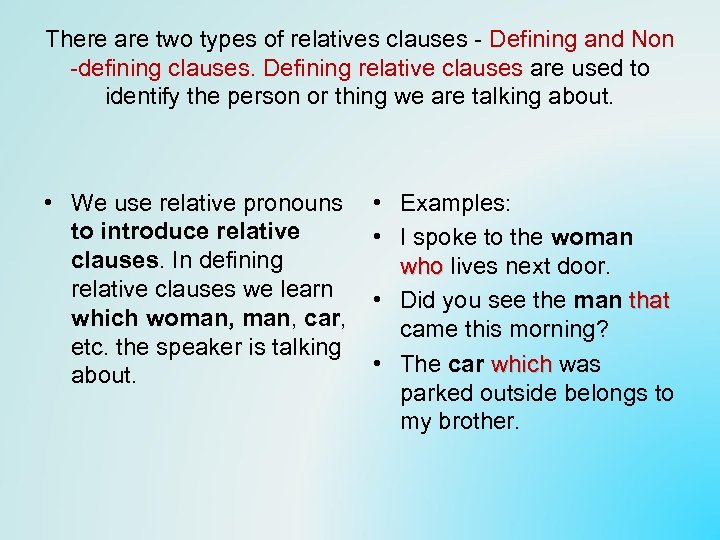 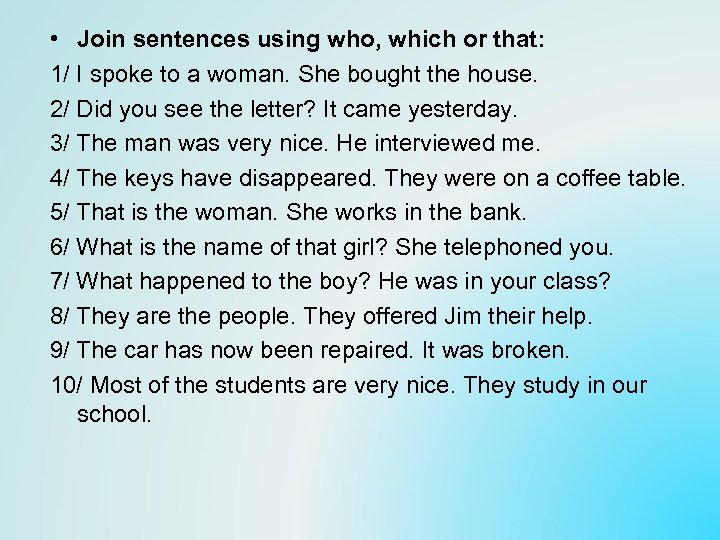 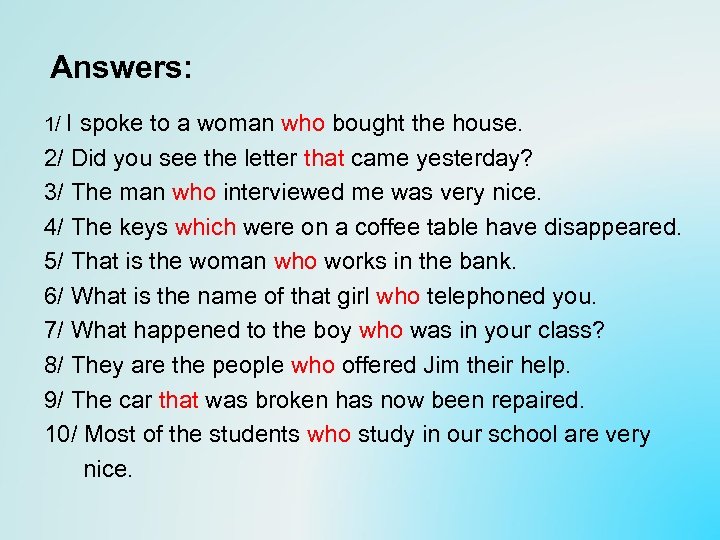 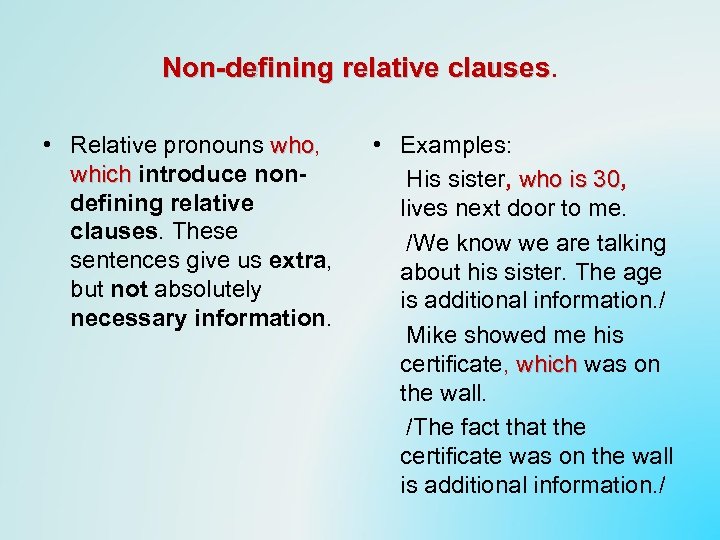 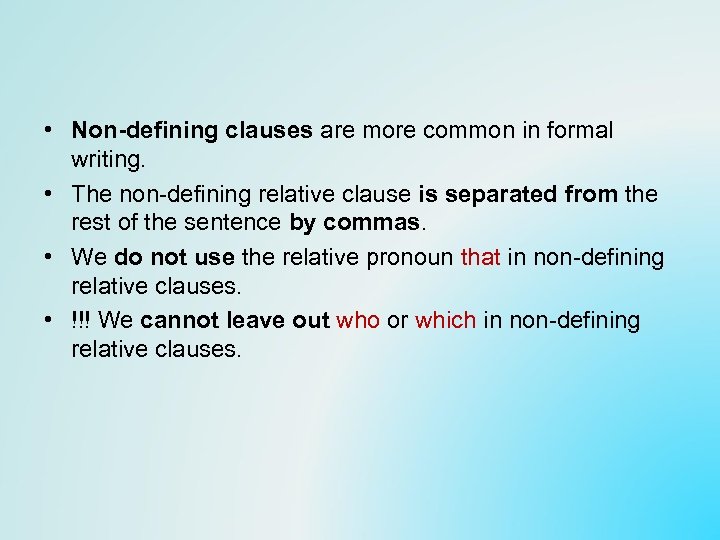 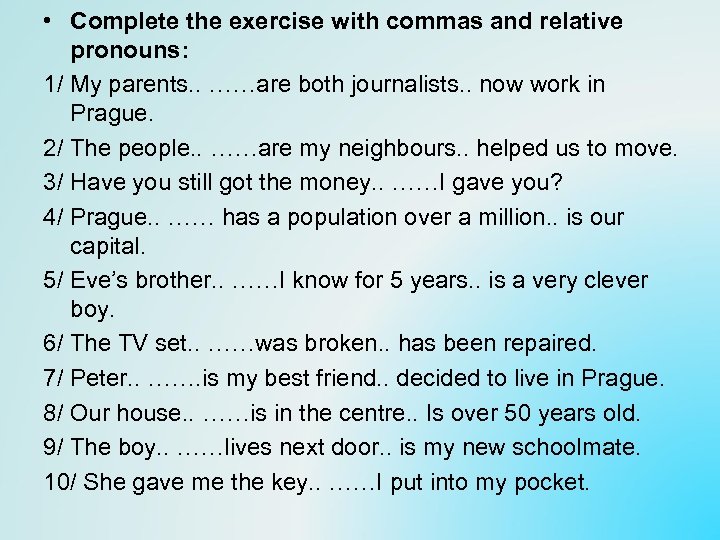 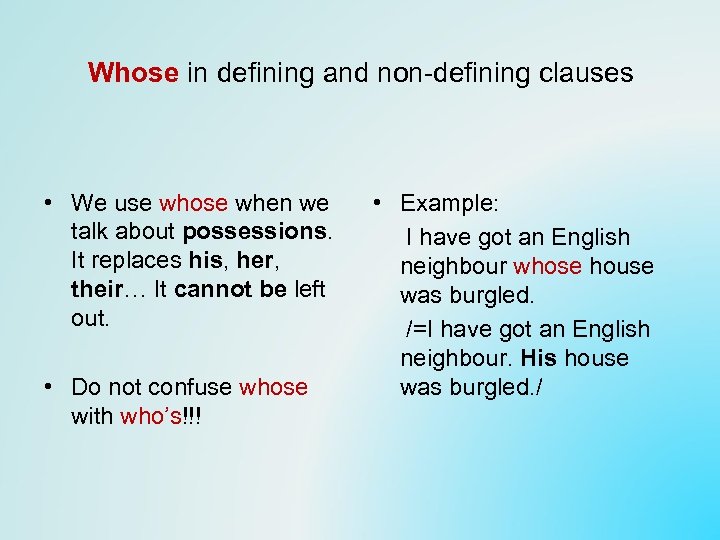 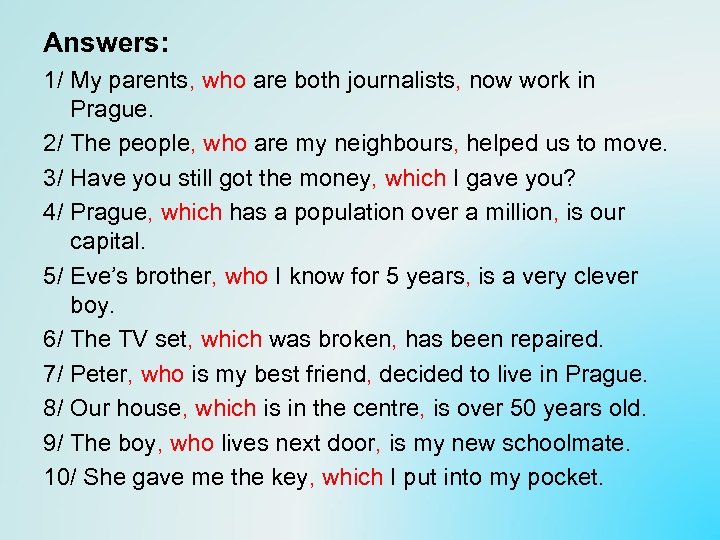 RELATIVE CLAUSES • We use relative clauses to join two English sentences, or to give more information about something. • E. g. We bought a new house. It is very modern. We bought a new house that is very modern. John lives in London. He enjoys living in London. John lives in London, which he enjoys. • Relative pronouns we use are: • who, which, that • who/that - for people • which/that – for things • We can also use: whose - for possessions, where - for places, when - for time.

• Some more examples: Paul is the man who has that fierce dog. Sam is annoyed with the man who stole her wallet. Jim is a boy that plays the drums. The woman that lived here before is a writer. The children saw the spacecraft which landed on the moon. There are many restaurants which do Saturday lunches. It is the film that I saw yesterday. We met in the town where we studied. The winter when we met was very cold and cruel.

• Leaving out who, which, that. • who, which, that can be the subject or object of a defining relative clause. • Example: Paul is the boy who gave me the ring. Here, who is the subject , so we can´t leave it out. /Paul gave me it/. • When who, that, which are objects, we often leave them out. Example: Peter is the boy /who/ we met yesterday. That man is the friend /who/ I invited to my birthday party. Here who is the object so we can leave it out.

• Join sentences using who, which or that: 1/ I spoke to a woman. She bought the house. 2/ Did you see the letter? It came yesterday. 3/ The man was very nice. He interviewed me. 4/ The keys have disappeared. They were on a coffee table. 5/ That is the woman. She works in the bank. 6/ What is the name of that girl? She telephoned you. 7/ What happened to the boy? He was in your class? 8/ They are the people. They offered Jim their help. 9/ The car has now been repaired. It was broken. 10/ Most of the students are very nice. They study in our school.

Answers: 1/ I spoke to a woman who bought the house. 2/ Did you see the letter that came yesterday? 3/ The man who interviewed me was very nice. 4/ The keys which were on a coffee table have disappeared. 5/ That is the woman who works in the bank. 6/ What is the name of that girl who telephoned you. 7/ What happened to the boy who was in your class? 8/ They are the people who offered Jim their help. 9/ The car that was broken has now been repaired. 10/ Most of the students who study in our school are very nice.

Non-defining relative clauses • Relative pronouns who, who which introduce nondefining relative clauses. These sentences give us extra, but not absolutely necessary information. • Examples: His sister, who is 30, 30 lives next door to me. /We know we are talking about his sister. The age is additional information. / Mike showed me his certificate, which was on the wall. /The fact that the certificate was on the wall is additional information. /

Answers: 1/ My parents, who are both journalists, now work in Prague. 2/ The people, who are my neighbours, helped us to move. 3/ Have you still got the money, which I gave you? 4/ Prague, which has a population over a million, is our capital. 5/ Eve’s brother, who I know for 5 years, is a very clever boy. 6/ The TV set, which was broken, has been repaired. 7/ Peter, who is my best friend, decided to live in Prague. 8/ Our house, which is in the centre, is over 50 years old. 9/ The boy, who lives next door, is my new schoolmate. 10/ She gave me the key, which I put into my pocket.