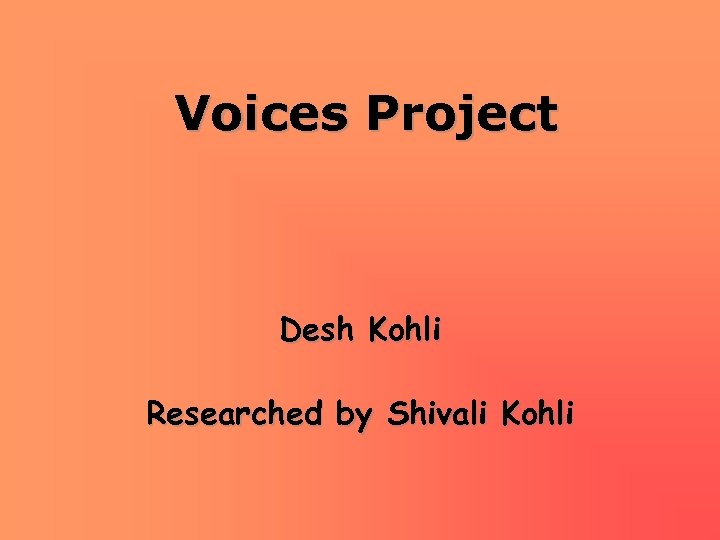 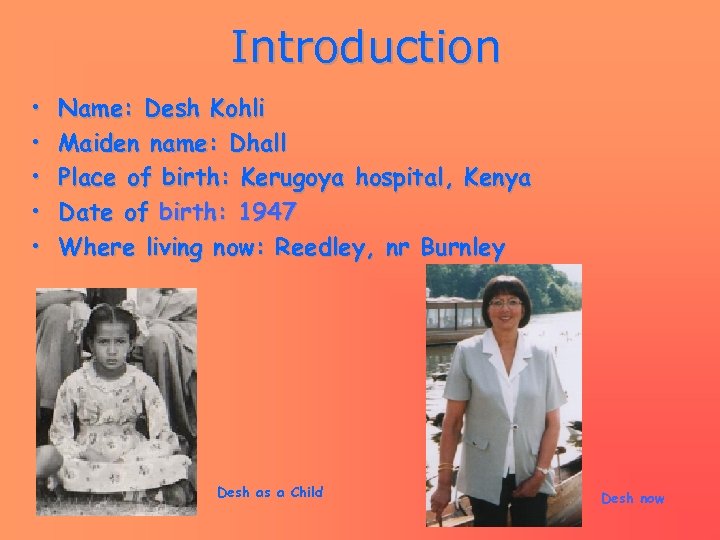 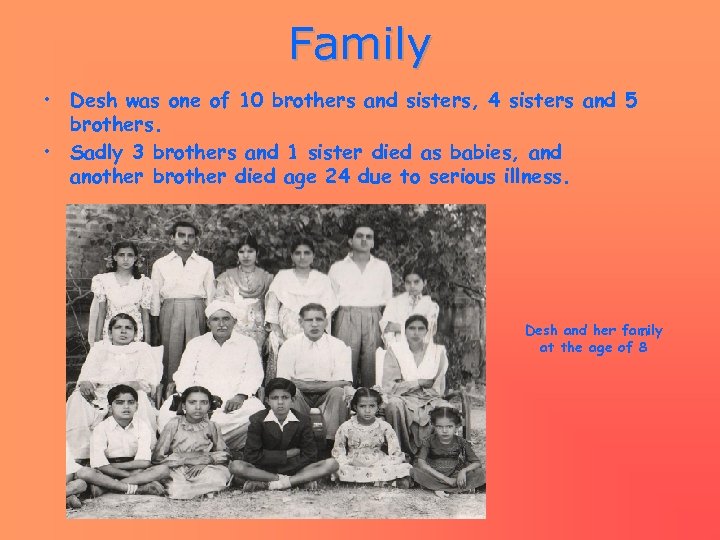 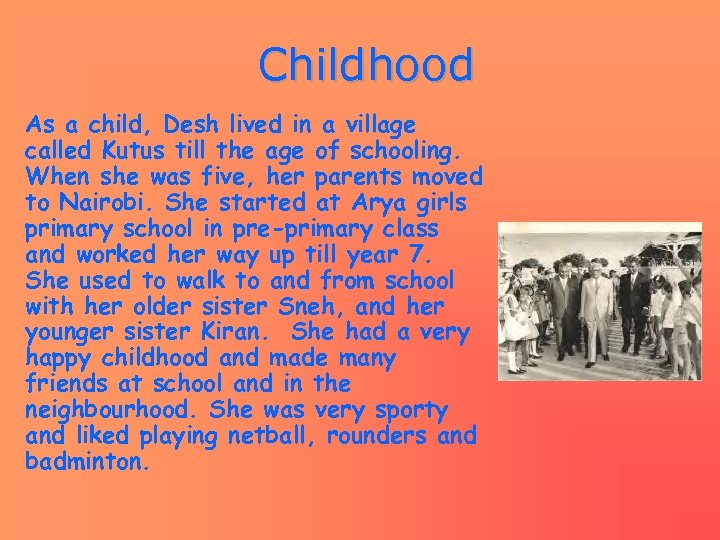 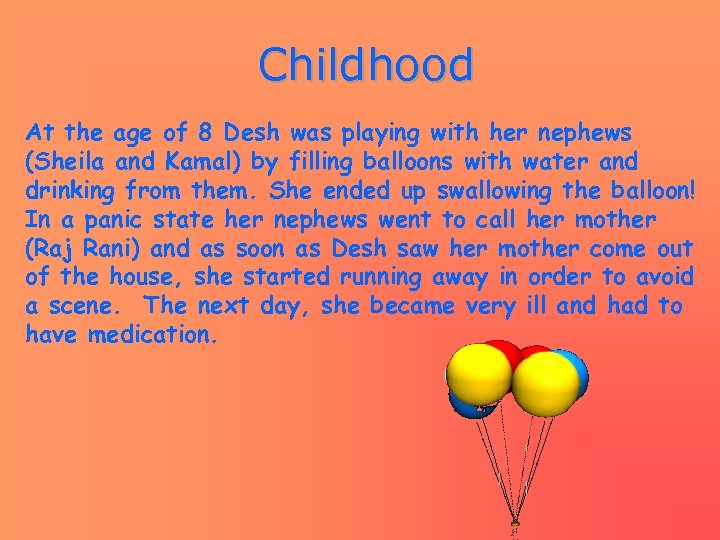 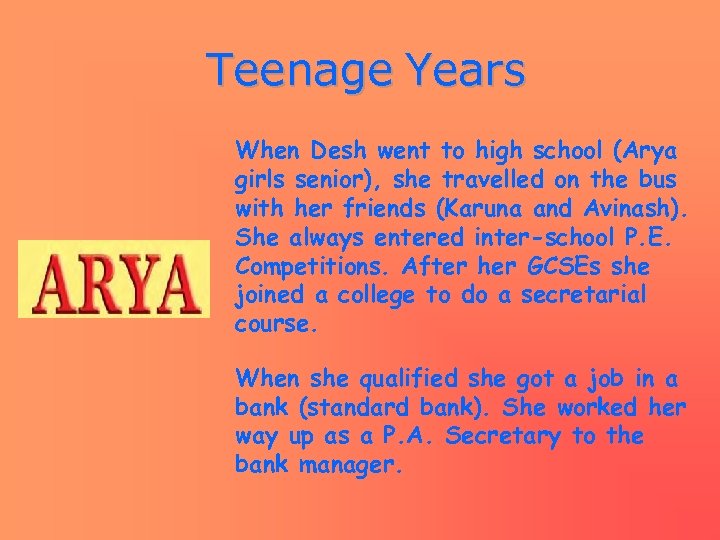 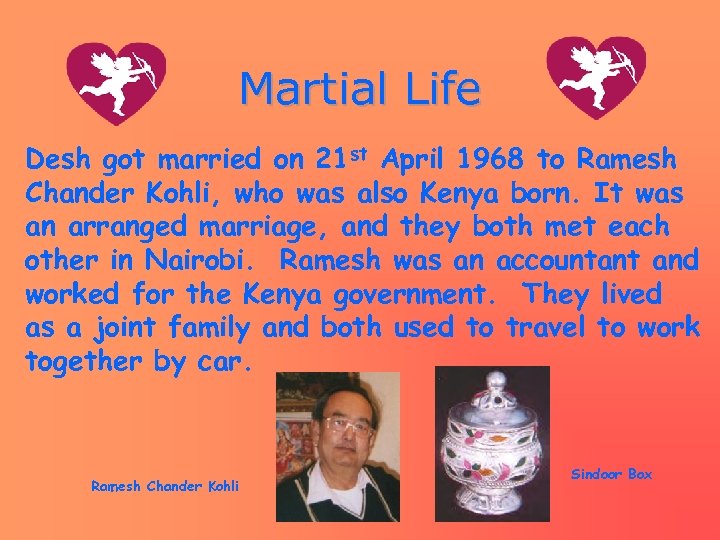 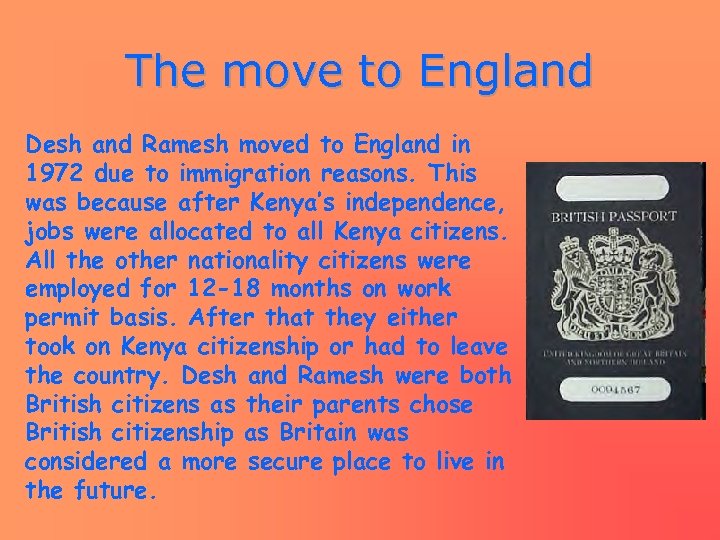 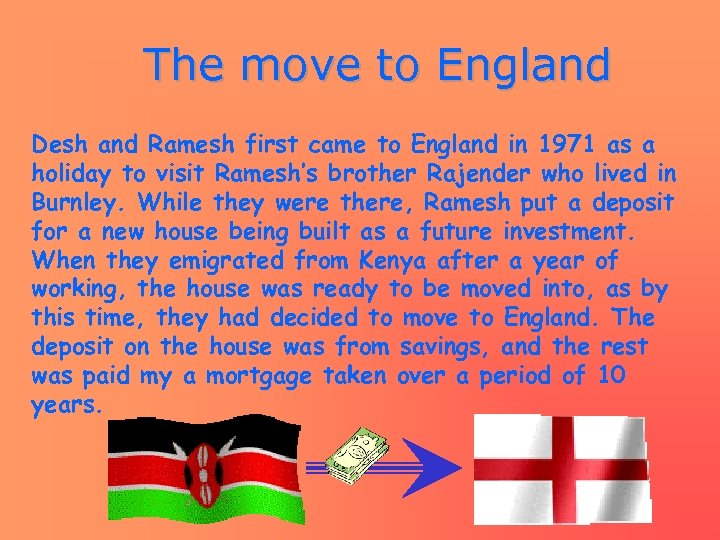 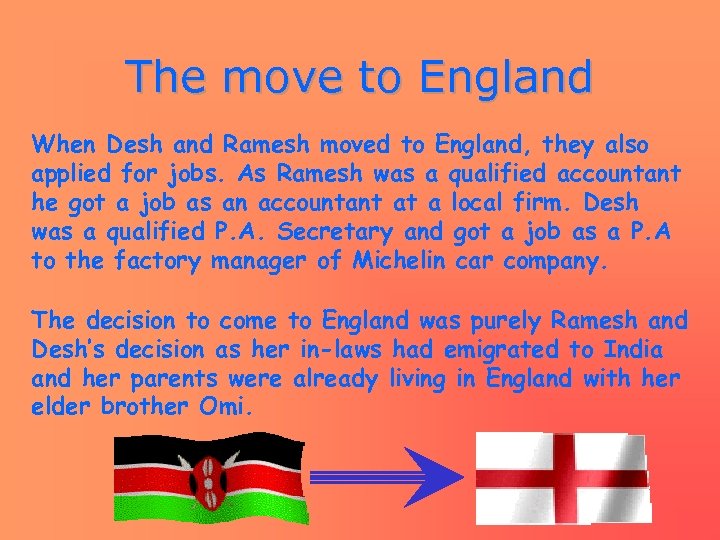 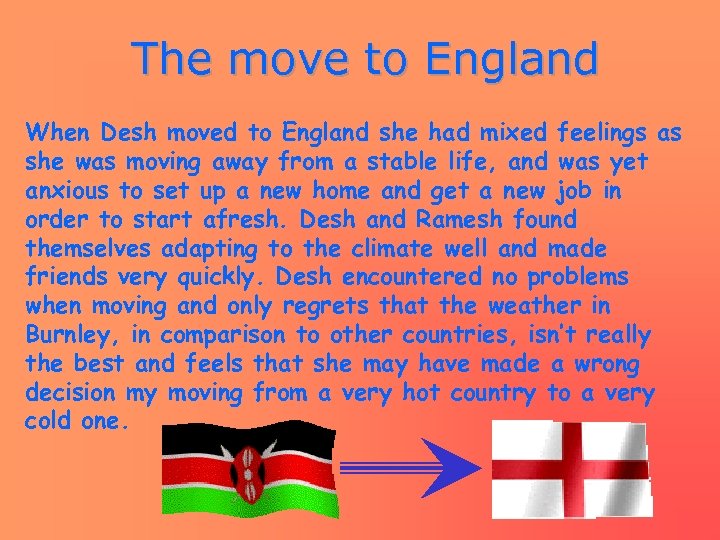 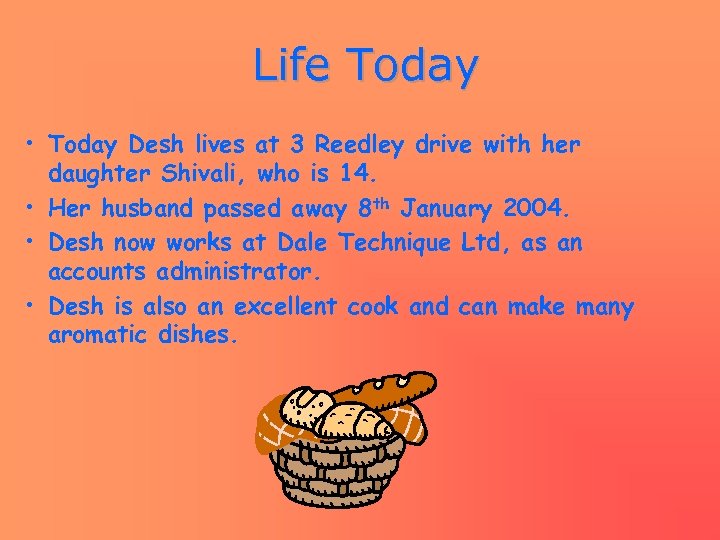 Family • Desh was one of 10 brothers and sisters, 4 sisters and 5 brothers. • Sadly 3 brothers and 1 sister died as babies, and another brother died age 24 due to serious illness. Desh and her family at the age of 8

Childhood As a child, Desh lived in a village called Kutus till the age of schooling. When she was five, her parents moved to Nairobi. She started at Arya girls primary school in pre-primary class and worked her way up till year 7. She used to walk to and from school with her older sister Sneh, and her younger sister Kiran. She had a very happy childhood and made many friends at school and in the neighbourhood. She was very sporty and liked playing netball, rounders and badminton.

Childhood At the age of 8 Desh was playing with her nephews (Sheila and Kamal) by filling balloons with water and drinking from them. She ended up swallowing the balloon! In a panic state her nephews went to call her mother (Raj Rani) and as soon as Desh saw her mother come out of the house, she started running away in order to avoid a scene. The next day, she became very ill and had to have medication.

Teenage Years When Desh went to high school (Arya girls senior), she travelled on the bus with her friends (Karuna and Avinash). She always entered inter-school P. E. Competitions. After her GCSEs she joined a college to do a secretarial course. When she qualified she got a job in a bank (standard bank). She worked her way up as a P. A. Secretary to the bank manager.

Martial Life Desh got married on 21 st April 1968 to Ramesh Chander Kohli, who was also Kenya born. It was an arranged marriage, and they both met each other in Nairobi. Ramesh was an accountant and worked for the Kenya government. They lived as a joint family and both used to travel to work together by car. Ramesh Chander Kohli Sindoor Box

The move to England Desh and Ramesh moved to England in 1972 due to immigration reasons. This was because after Kenya’s independence, jobs were allocated to all Kenya citizens. All the other nationality citizens were employed for 12 -18 months on work permit basis. After that they either took on Kenya citizenship or had to leave the country. Desh and Ramesh were both British citizens as their parents chose British citizenship as Britain was considered a more secure place to live in the future.

The move to England Desh and Ramesh first came to England in 1971 as a holiday to visit Ramesh’s brother Rajender who lived in Burnley. While they were there, Ramesh put a deposit for a new house being built as a future investment. When they emigrated from Kenya after a year of working, the house was ready to be moved into, as by this time, they had decided to move to England. The deposit on the house was from savings, and the rest was paid my a mortgage taken over a period of 10 years.

The move to England When Desh and Ramesh moved to England, they also applied for jobs. As Ramesh was a qualified accountant he got a job as an accountant at a local firm. Desh was a qualified P. A. Secretary and got a job as a P. A to the factory manager of Michelin car company. The decision to come to England was purely Ramesh and Desh’s decision as her in-laws had emigrated to India and her parents were already living in England with her elder brother Omi.

The move to England When Desh moved to England she had mixed feelings as she was moving away from a stable life, and was yet anxious to set up a new home and get a new job in order to start afresh. Desh and Ramesh found themselves adapting to the climate well and made friends very quickly. Desh encountered no problems when moving and only regrets that the weather in Burnley, in comparison to other countries, isn’t really the best and feels that she may have made a wrong decision my moving from a very hot country to a very cold one.

Life Today • Today Desh lives at 3 Reedley drive with her daughter Shivali, who is 14. • Her husband passed away 8 th January 2004. • Desh now works at Dale Technique Ltd, as an accounts administrator. • Desh is also an excellent cook and can make many aromatic dishes.