Vaughan Cairns Russell After 1949 many 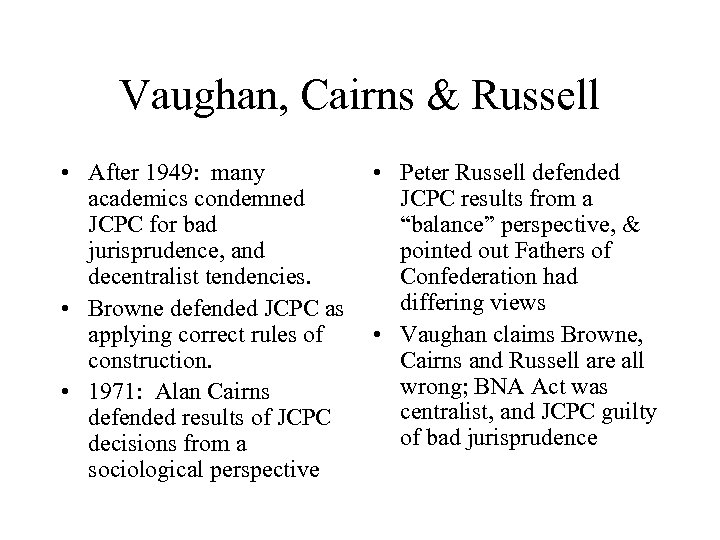 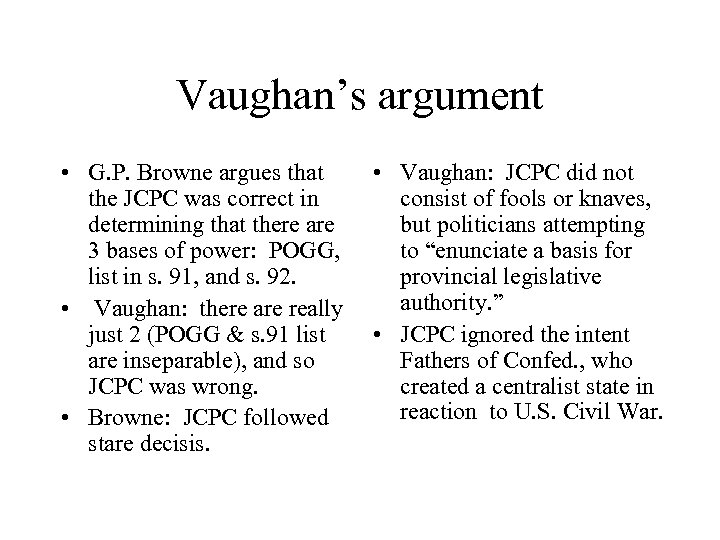 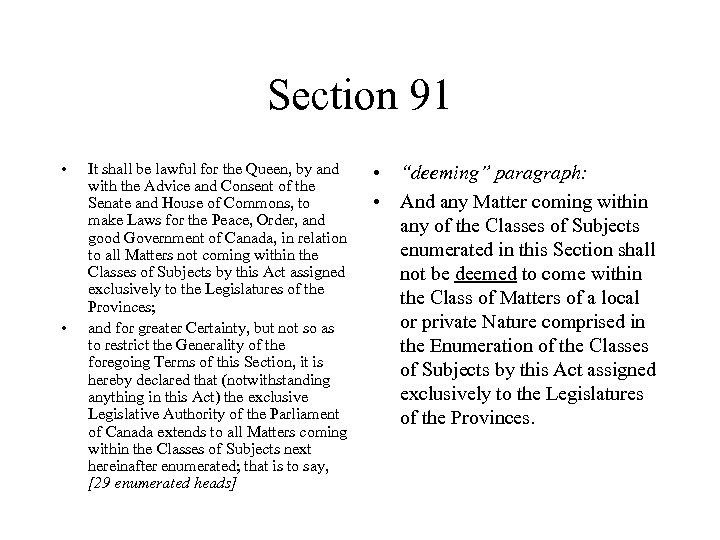 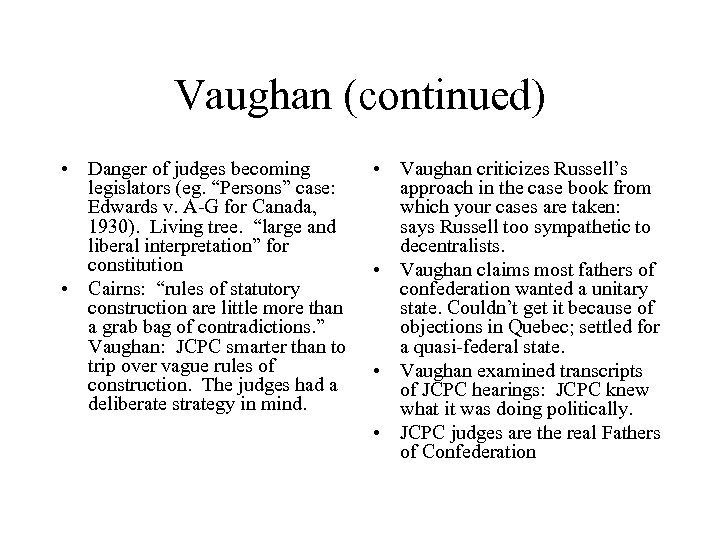 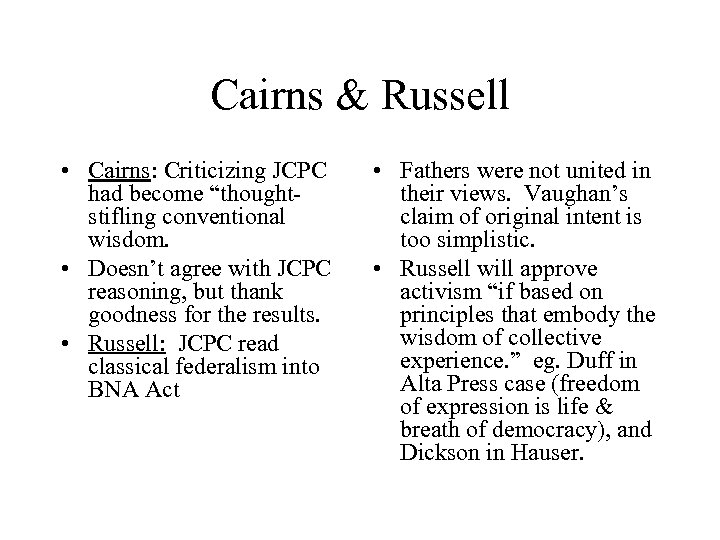 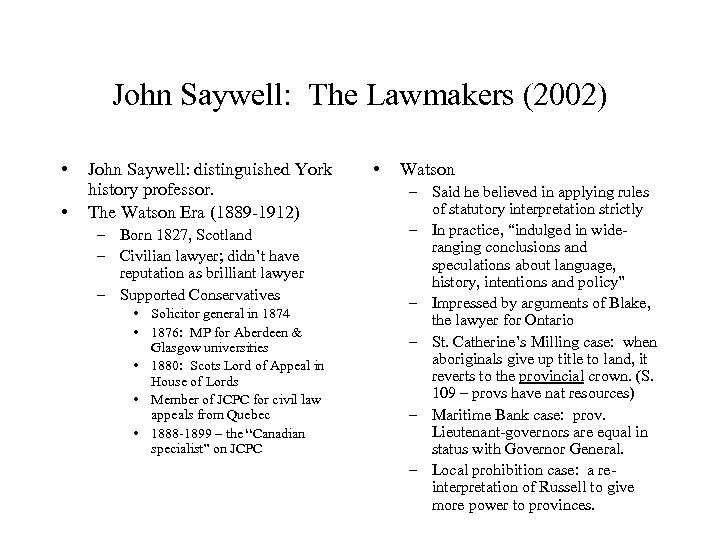 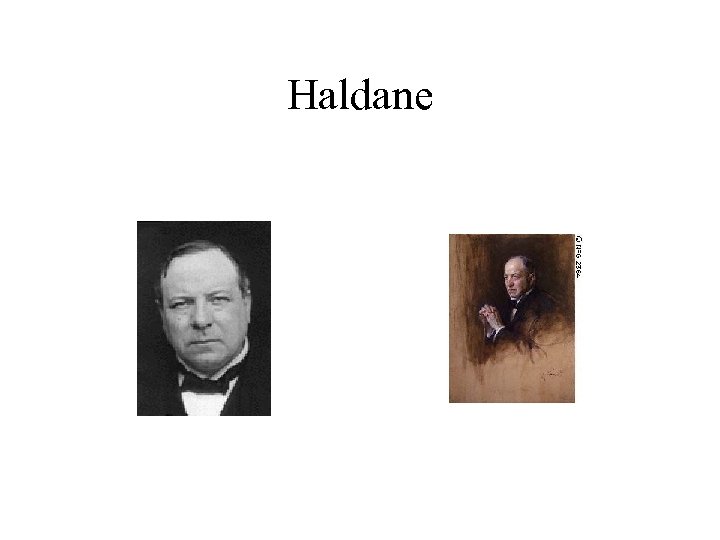 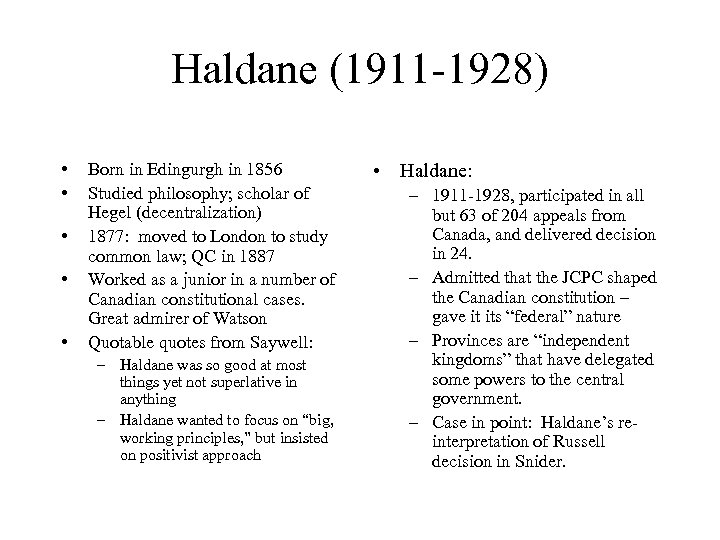 Vaughan’s argument • G. P. Browne argues that the JCPC was correct in determining that there are 3 bases of power: POGG, list in s. 91, and s. 92. • Vaughan: there are really just 2 (POGG & s. 91 list are inseparable), and so JCPC was wrong. • Browne: JCPC followed stare decisis. • Vaughan: JCPC did not consist of fools or knaves, but politicians attempting to “enunciate a basis for provincial legislative authority. ” • JCPC ignored the intent Fathers of Confed. , who created a centralist state in reaction to U. S. Civil War.

Vaughan (continued) • Danger of judges becoming legislators (eg. “Persons” case: Edwards v. A-G for Canada, 1930). Living tree. “large and liberal interpretation” for constitution • Cairns: “rules of statutory construction are little more than a grab bag of contradictions. ” Vaughan: JCPC smarter than to trip over vague rules of construction. The judges had a deliberate strategy in mind. • Vaughan criticizes Russell’s approach in the case book from which your cases are taken: says Russell too sympathetic to decentralists. • Vaughan claims most fathers of confederation wanted a unitary state. Couldn’t get it because of objections in Quebec; settled for a quasi-federal state. • Vaughan examined transcripts of JCPC hearings: JCPC knew what it was doing politically. • JCPC judges are the real Fathers of Confederation

Cairns & Russell • Cairns: Criticizing JCPC had become “thoughtstifling conventional wisdom. • Doesn’t agree with JCPC reasoning, but thank goodness for the results. • Russell: JCPC read classical federalism into BNA Act • Fathers were not united in their views. Vaughan’s claim of original intent is too simplistic. • Russell will approve activism “if based on principles that embody the wisdom of collective experience. ” eg. Duff in Alta Press case (freedom of expression is life & breath of democracy), and Dickson in Hauser.

John Saywell: The Lawmakers (2002) • • John Saywell: distinguished York history professor. The Watson Era (1889 -1912) – Born 1827, Scotland – Civilian lawyer; didn’t have reputation as brilliant lawyer – Supported Conservatives • Solicitor general in 1874 • 1876: MP for Aberdeen & Glasgow universities • 1880: Scots Lord of Appeal in House of Lords • Member of JCPC for civil law appeals from Quebec • 1888 -1899 – the “Canadian specialist” on JCPC • Watson – Said he believed in applying rules of statutory interpretation strictly – In practice, “indulged in wideranging conclusions and speculations about language, history, intentions and policy” – Impressed by arguments of Blake, the lawyer for Ontario – St. Catherine’s Milling case: when aboriginals give up title to land, it reverts to the provincial crown. (S. 109 – provs have nat resources) – Maritime Bank case: prov. Lieutenant-governors are equal in status with Governor General. – Local prohibition case: a reinterpretation of Russell to give more power to provinces.

Haldane (1911 -1928) • • • Born in Edingurgh in 1856 Studied philosophy; scholar of Hegel (decentralization) 1877: moved to London to study common law; QC in 1887 Worked as a junior in a number of Canadian constitutional cases. Great admirer of Watson Quotable quotes from Saywell: – Haldane was so good at most things yet not superlative in anything – Haldane wanted to focus on “big, working principles, ” but insisted on positivist approach • Haldane: – 1911 -1928, participated in all but 63 of 204 appeals from Canada, and delivered decision in 24. – Admitted that the JCPC shaped the Canadian constitution – gave it its “federal” nature – Provinces are “independent kingdoms” that have delegated some powers to the central government. – Case in point: Haldane’s reinterpretation of Russell decision in Snider.