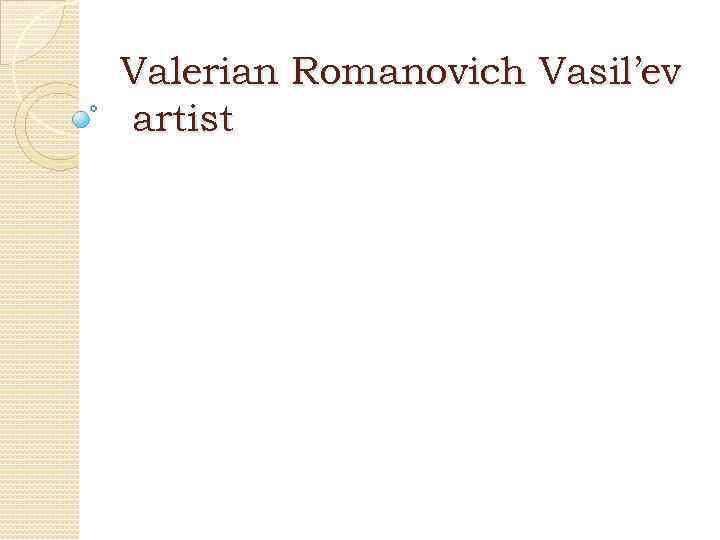 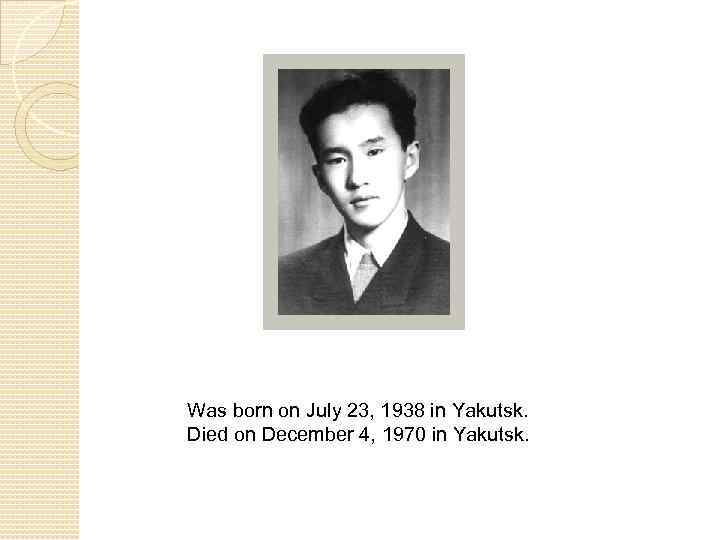 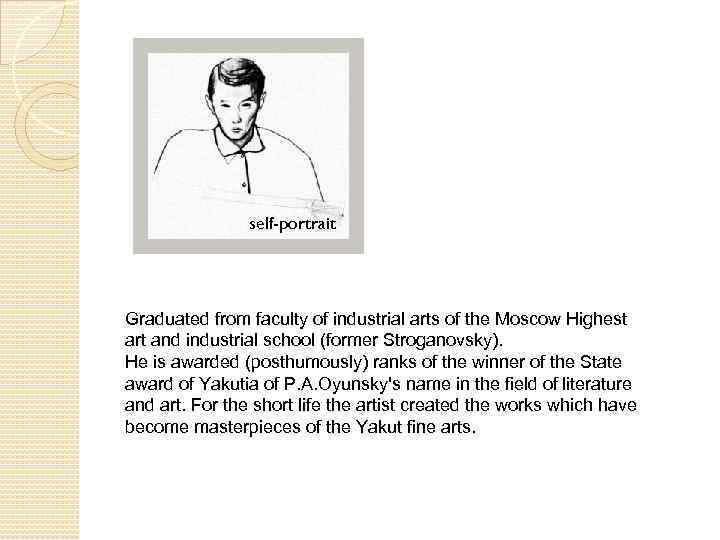 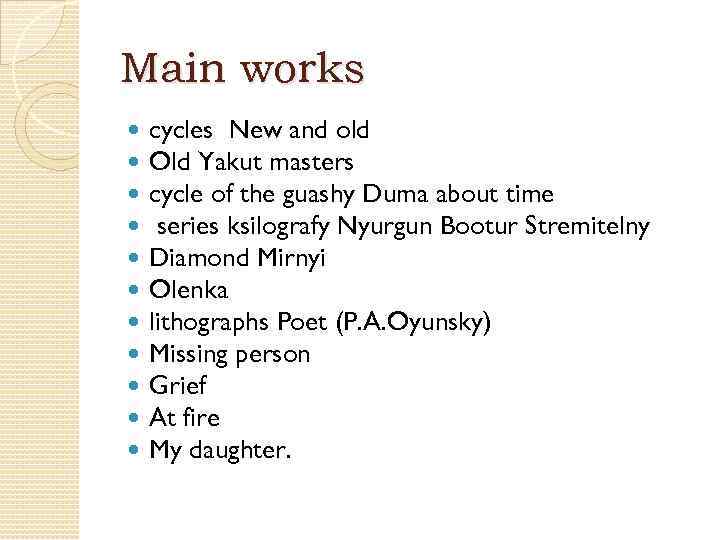 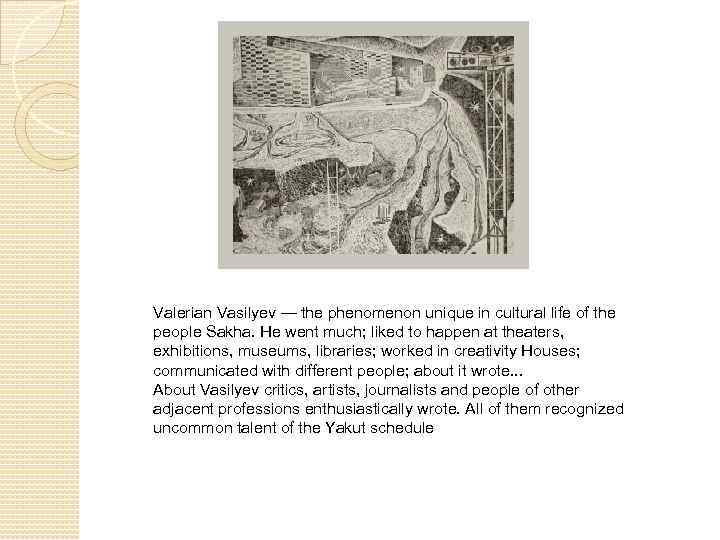 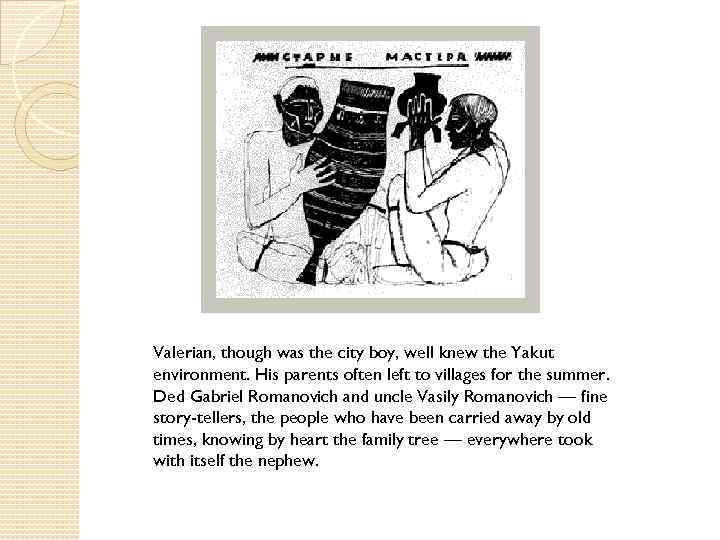 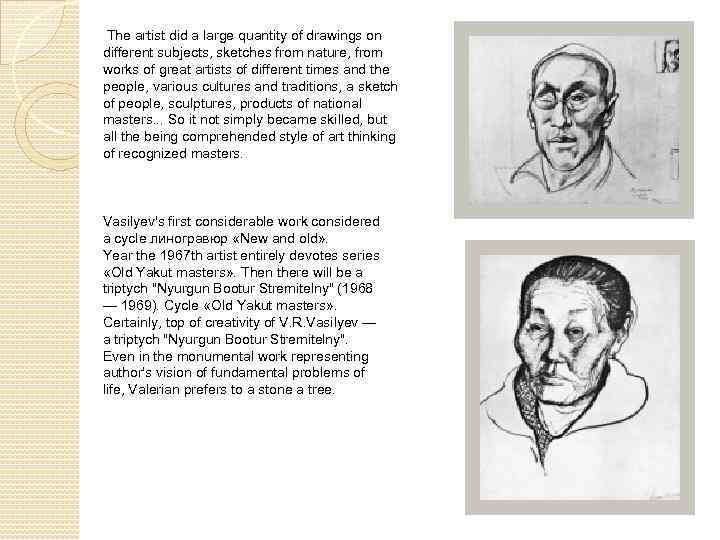 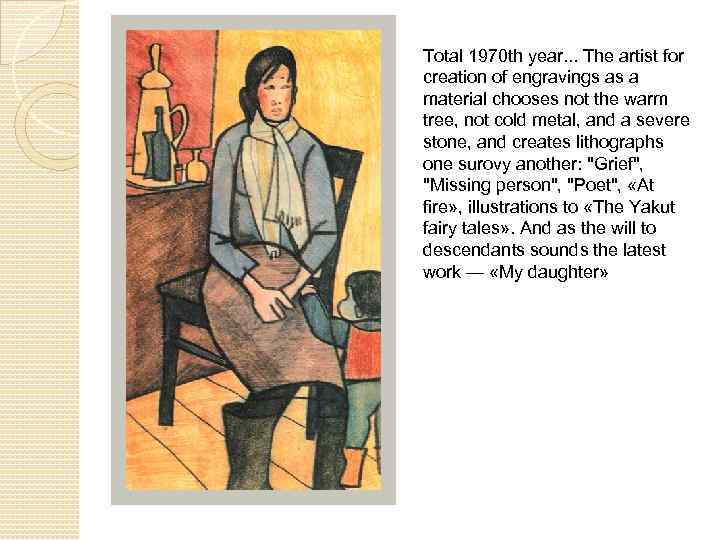 self-portrait Graduated from faculty of industrial arts of the Moscow Highest art and industrial school (former Stroganovsky). He is awarded (posthumously) ranks of the winner of the State award of Yakutia of P. A. Oyunsky's name in the field of literature and art. For the short life the artist created the works which have become masterpieces of the Yakut fine arts.

Valerian Vasilyev — the phenomenon unique in cultural life of the people Sakha. He went much; liked to happen at theaters, exhibitions, museums, libraries; worked in creativity Houses; communicated with different people; about it wrote. . . About Vasilyev critics, artists, journalists and people of other adjacent professions enthusiastically wrote. All of them recognized uncommon talent of the Yakut schedule

Valerian, though was the city boy, well knew the Yakut environment. His parents often left to villages for the summer. Ded Gabriel Romanovich and uncle Vasily Romanovich — fine story-tellers, the people who have been carried away by old times, knowing by heart the family tree — everywhere took with itself the nephew.

The artist did a large quantity of drawings on different subjects, sketches from nature, from works of great artists of different times and the people, various cultures and traditions, a sketch of people, sculptures, products of national masters. . . So it not simply became skilled, but all the being comprehended style of art thinking of recognized masters. Vasilyev's first considerable work considered a cycle линогравюр «New and old» . Year the 1967 th artist entirely devotes series «Old Yakut masters» . Then there will be a triptych "Nyurgun Bootur Stremitelny" (1968 — 1969). Cycle «Old Yakut masters» . Certainly, top of creativity of V. R. Vasilyev — a triptych "Nyurgun Bootur Stremitelny". Even in the monumental work representing author's vision of fundamental problems of life, Valerian prefers to a stone a tree.

Total 1970 th year. . . The artist for creation of engravings as a material chooses not the warm tree, not cold metal, and a severe stone, and creates lithographs one surovy another: "Grief", "Missing person", "Poet", «At fire» , illustrations to «The Yakut fairy tales» . And as the will to descendants sounds the latest work — «My daughter»