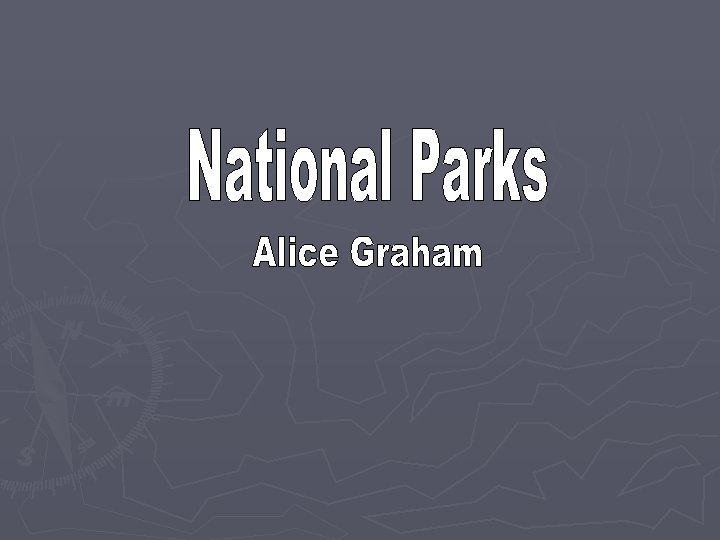 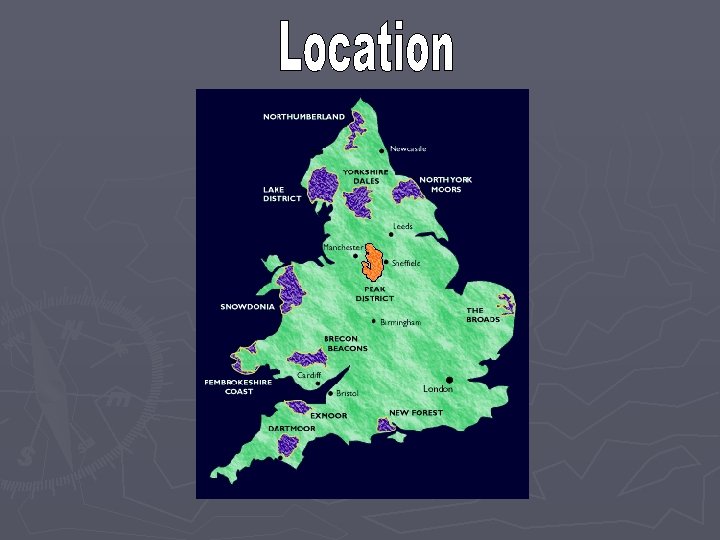 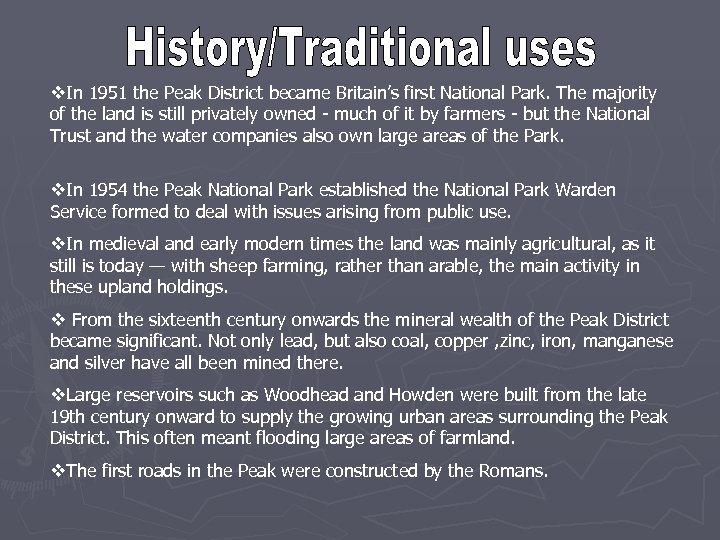 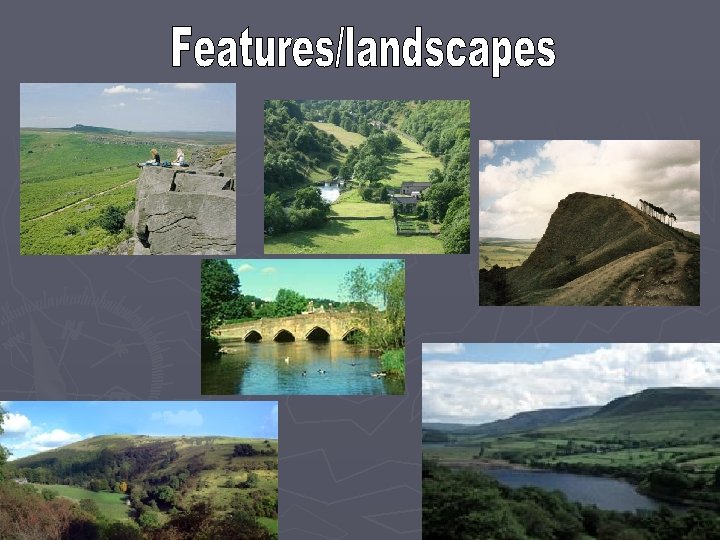 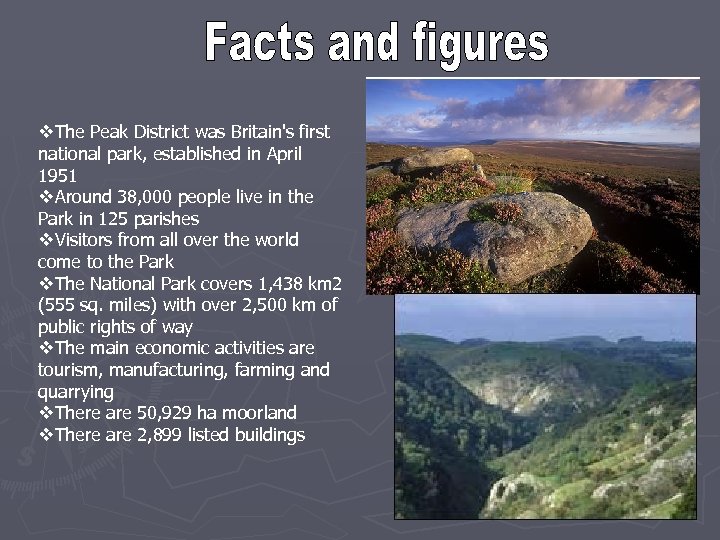 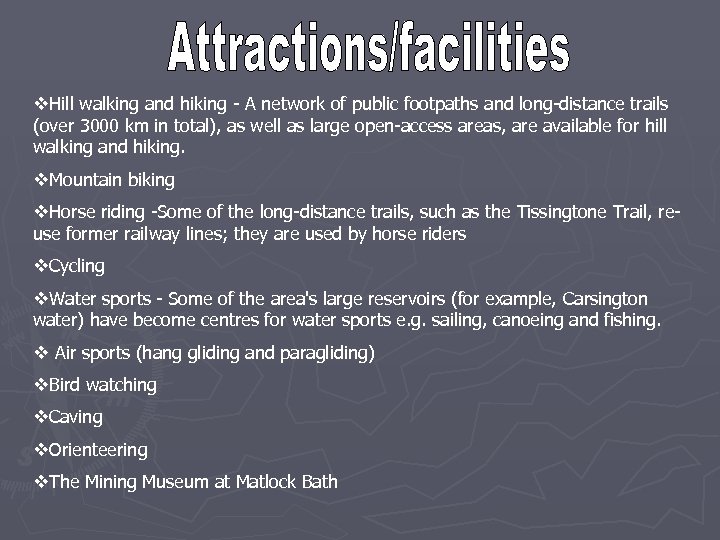 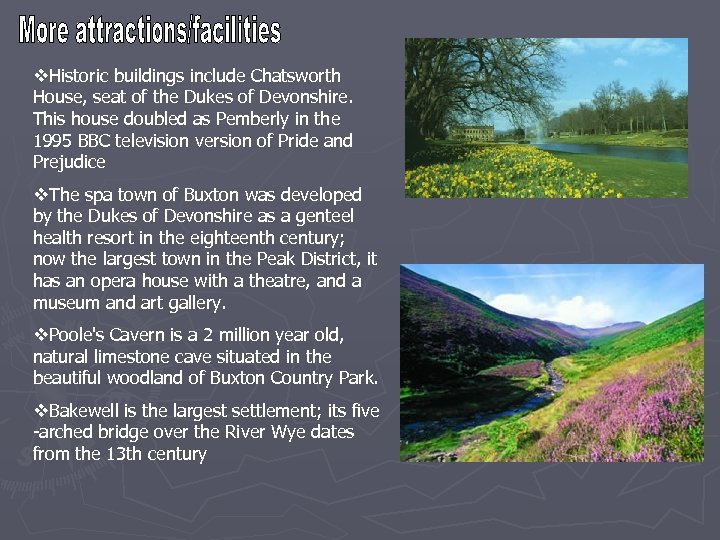 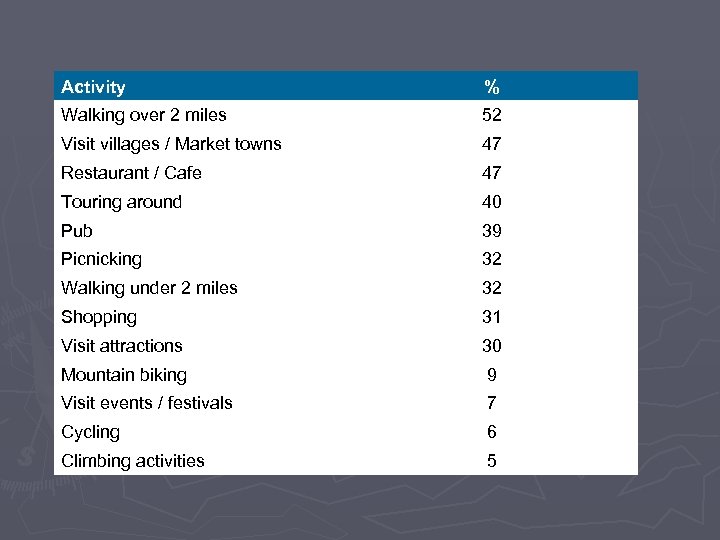 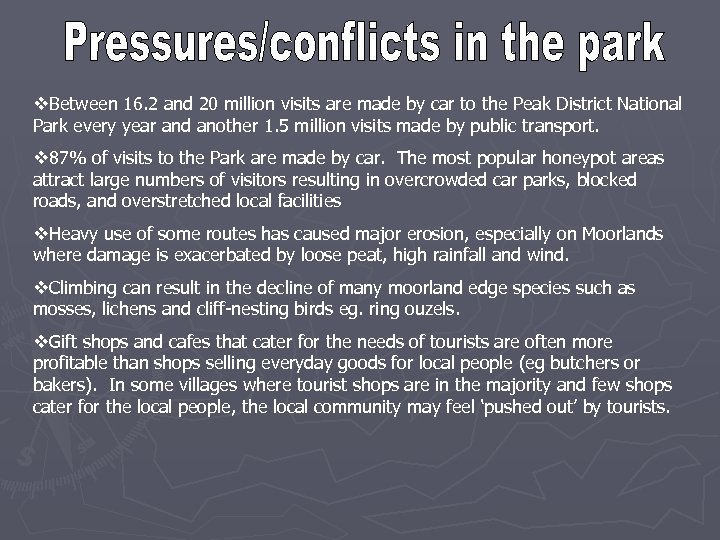 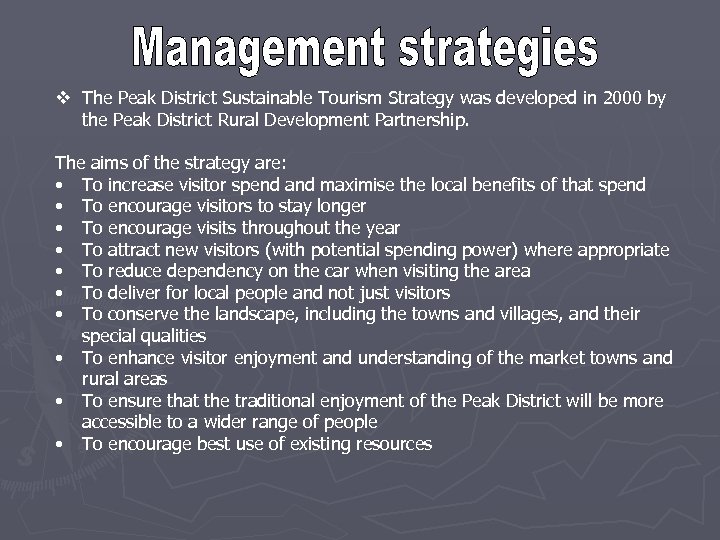 v. In 1951 the Peak District became Britain’s first National Park. The majority of the land is still privately owned - much of it by farmers - but the National Trust and the water companies also own large areas of the Park. v. In 1954 the Peak National Park established the National Park Warden Service formed to deal with issues arising from public use. v. In medieval and early modern times the land was mainly agricultural, as it still is today — with sheep farming, rather than arable, the main activity in these upland holdings. v From the sixteenth century onwards the mineral wealth of the Peak District became significant. Not only lead, but also coal, copper , zinc, iron, manganese and silver have all been mined there. v. Large reservoirs such as Woodhead and Howden were built from the late 19 th century onward to supply the growing urban areas surrounding the Peak District. This often meant flooding large areas of farmland. v. The first roads in the Peak were constructed by the Romans.

v. Historic buildings include Chatsworth House, seat of the Dukes of Devonshire. This house doubled as Pemberly in the 1995 BBC television version of Pride and Prejudice v. The spa town of Buxton was developed by the Dukes of Devonshire as a genteel health resort in the eighteenth century; now the largest town in the Peak District, it has an opera house with a theatre, and a museum and art gallery. v. Poole's Cavern is a 2 million year old, natural limestone cave situated in the beautiful woodland of Buxton Country Park. v. Bakewell is the largest settlement; its five -arched bridge over the River Wye dates from the 13 th century

v. Between 16. 2 and 20 million visits are made by car to the Peak District National Park every year and another 1. 5 million visits made by public transport. v 87% of visits to the Park are made by car. The most popular honeypot areas attract large numbers of visitors resulting in overcrowded car parks, blocked roads, and overstretched local facilities v. Heavy use of some routes has caused major erosion, especially on Moorlands where damage is exacerbated by loose peat, high rainfall and wind. v. Climbing can result in the decline of many moorland edge species such as mosses, lichens and cliff-nesting birds eg. ring ouzels. v. Gift shops and cafes that cater for the needs of tourists are often more profitable than shops selling everyday goods for local people (eg butchers or bakers). In some villages where tourist shops are in the majority and few shops cater for the local people, the local community may feel ‘pushed out’ by tourists.

v The Peak District Sustainable Tourism Strategy was developed in 2000 by the Peak District Rural Development Partnership. The aims of the strategy are: • To increase visitor spend and maximise the local benefits of that spend • To encourage visitors to stay longer • To encourage visits throughout the year • To attract new visitors (with potential spending power) where appropriate • To reduce dependency on the car when visiting the area • To deliver for local people and not just visitors • To conserve the landscape, including the towns and villages, and their special qualities • To enhance visitor enjoyment and understanding of the market towns and rural areas • To ensure that the traditional enjoyment of the Peak District will be more accessible to a wider range of people • To encourage best use of existing resources