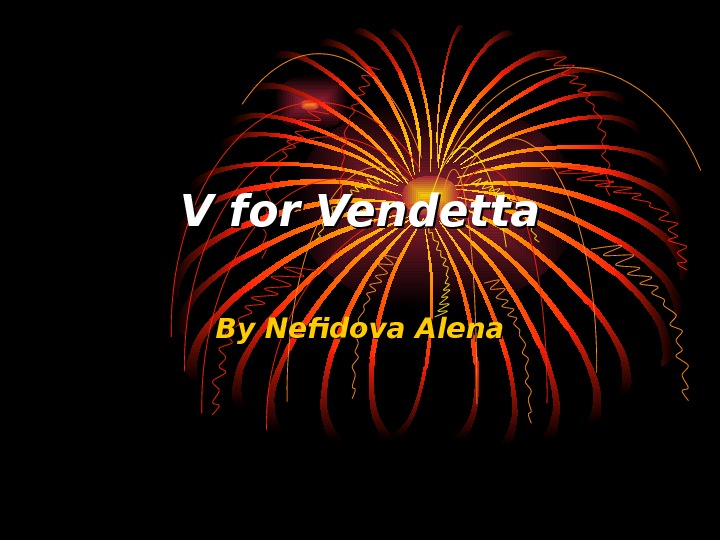 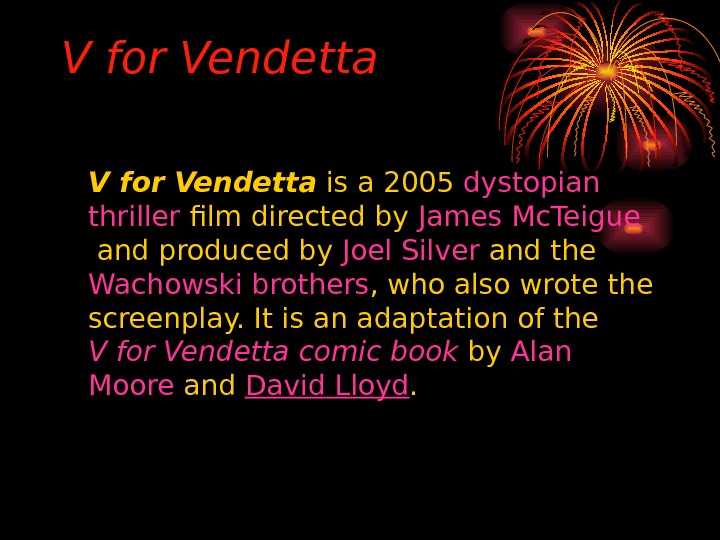 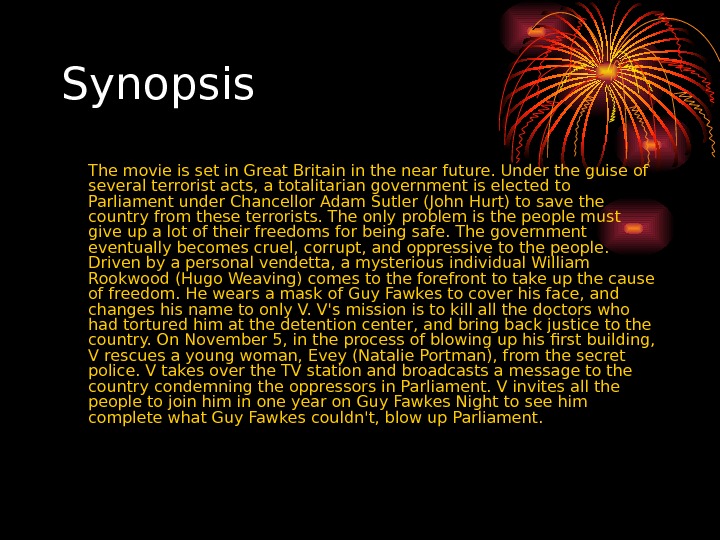 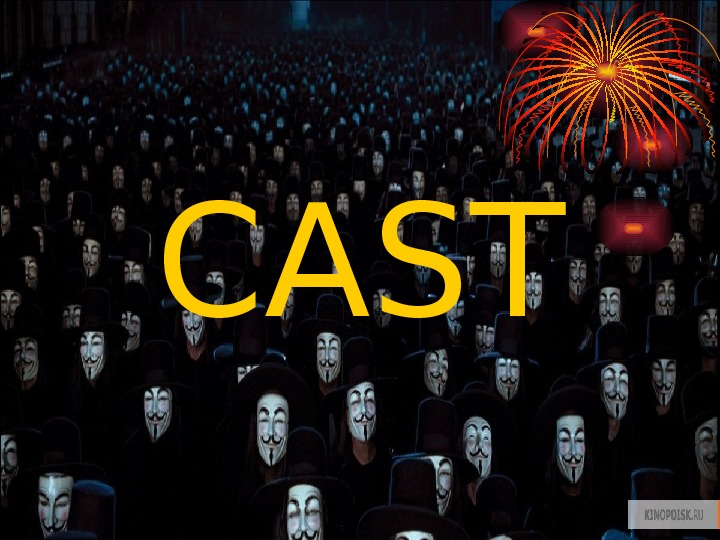 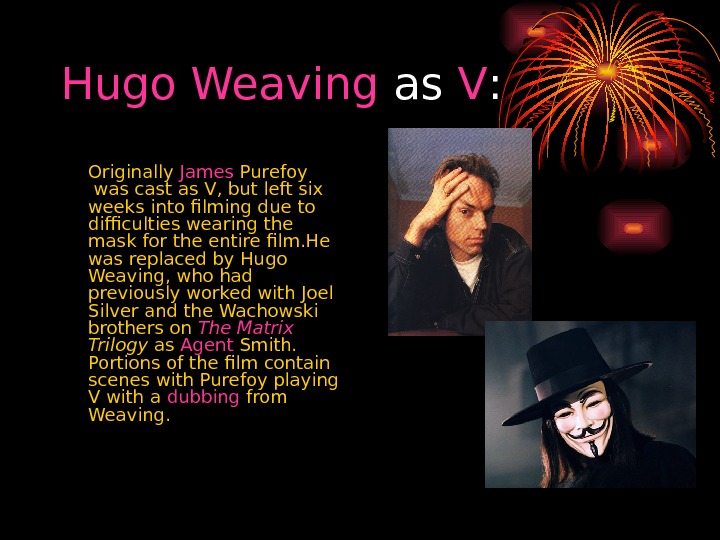 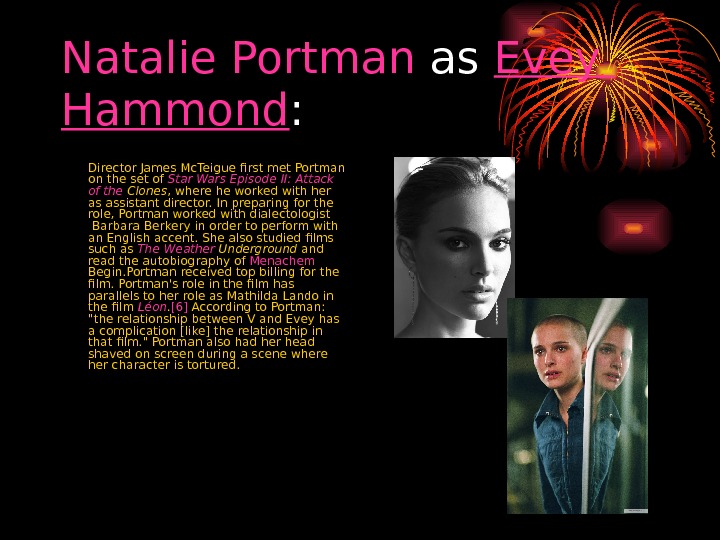 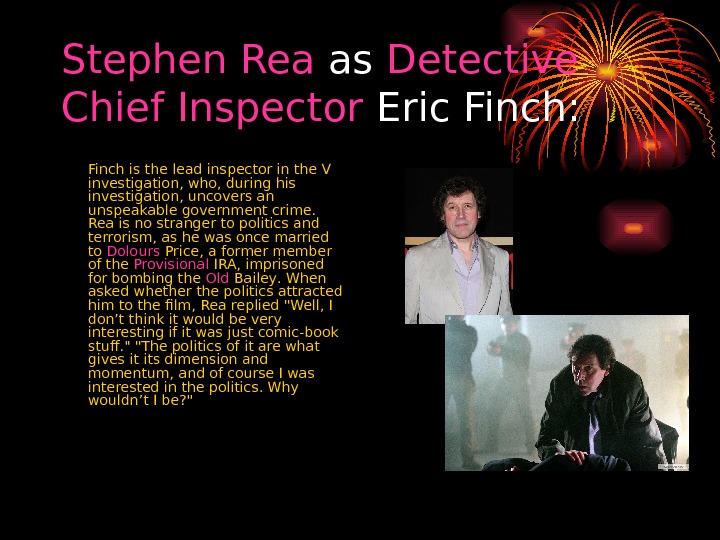 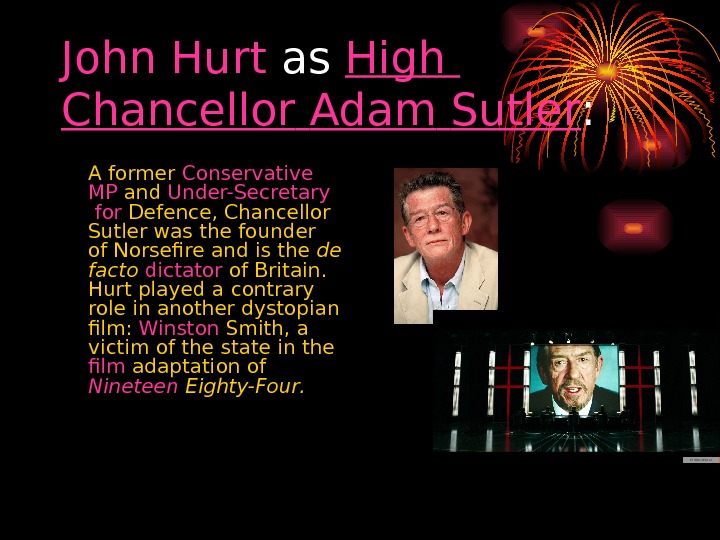 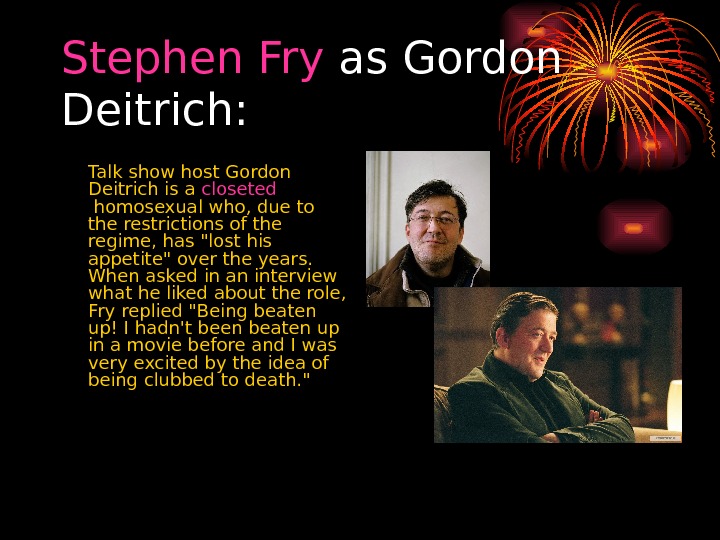 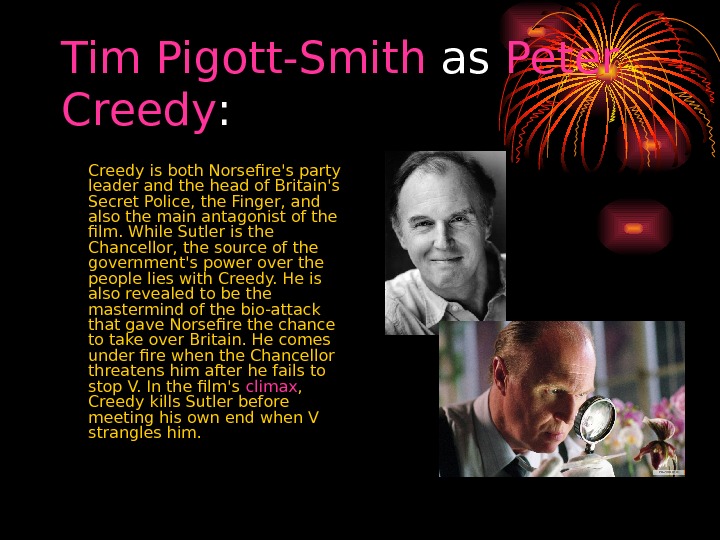 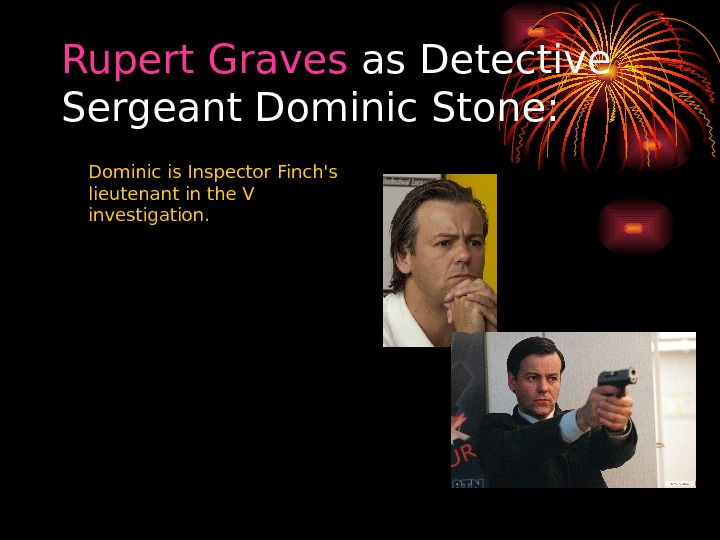 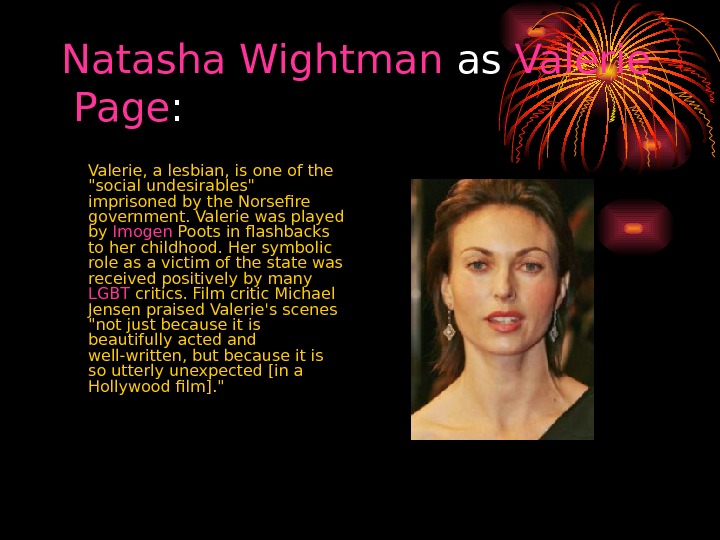 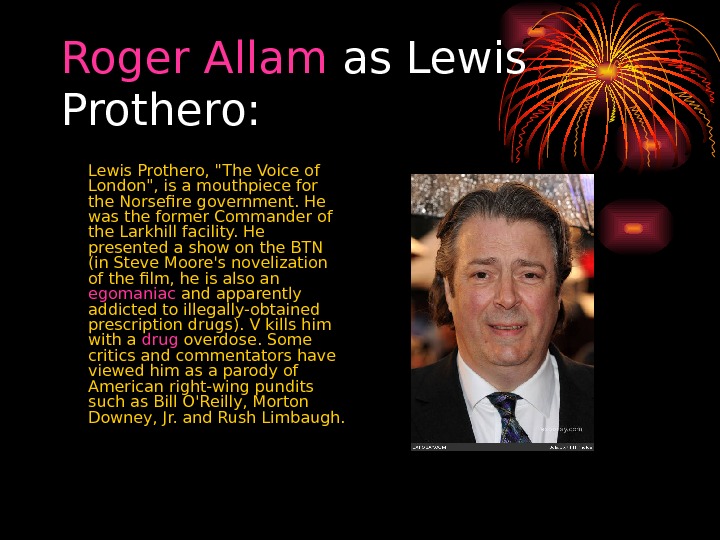 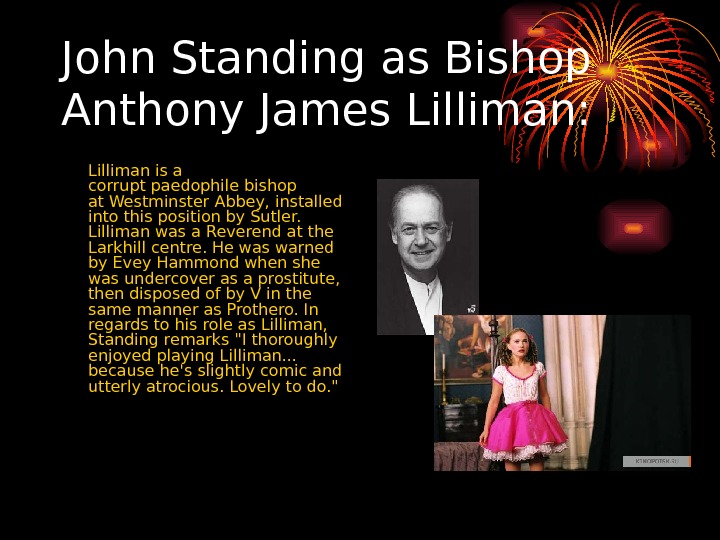 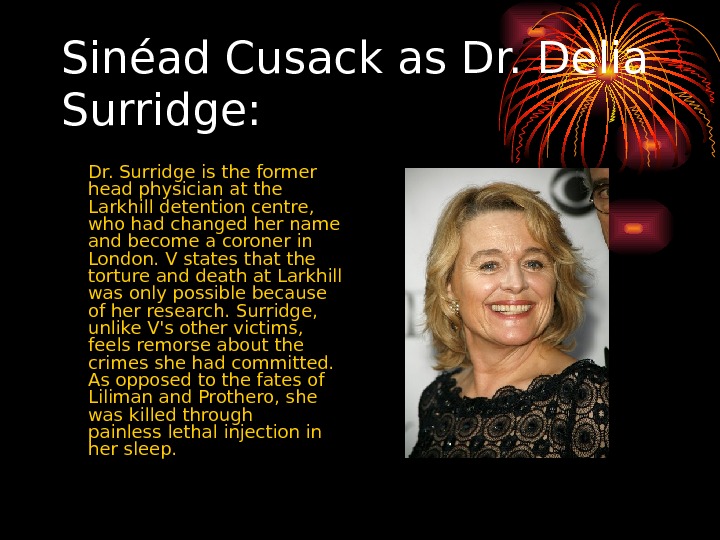 V for Vendetta By Nefidova Alena

V for Vendetta is a 2005 dystopian thriller film directed by James Mc. Teigue and produced by Joel Silver and the Wachowski brothers , who also wrote the screenplay. It is an adaptation of the V for Vendetta comic book by Alan Moore and David Lloyd.

Synopsis The movie is set in Great Britain in the near future. Under the guise of several terrorist acts, a totalitarian government is elected to Parliament under Chancellor Adam Sutler (John Hurt) to save the country from these terrorists. The only problem is the people must give up a lot of their freedoms for being safe. The government eventually becomes cruel, corrupt, and oppressive to the people. Driven by a personal vendetta, a mysterious individual William Rookwood (Hugo Weaving) comes to the forefront to take up the cause of freedom. He wears a mask of Guy Fawkes to cover his face, and changes his name to only V. V’s mission is to kill all the doctors who had tortured him at the detention center, and bring back justice to the country. On November 5, in the process of blowing up his first building, V rescues a young woman, Evey (Natalie Portman), from the secret police. V takes over the TV station and broadcasts a message to the country condemning the oppressors in Parliament. V invites all the people to join him in one year on Guy Fawkes Night to see him complete what Guy Fawkes couldn’t, blow up Parliament.

Hugo Weaving as V : Originally James Purefoy was cast as V, but left six weeks into filming due to difficulties wearing the mask for the entire film. He was replaced by Hugo Weaving, who had previously worked with Joel Silver and the Wachowski brothers on The Matrix Trilogy as Agent Smith. Portions of the film contain scenes with Purefoy playing V with a dubbing from Weaving.

Natalie Portman as Evey Hammond : Director James Mc. Teigue first met Portman on the set of Star Wars Episode II: Attack of the Clones , where he worked with her as assistant director. In preparing for the role, Portman worked with dialectologist Barbara Berkery in order to perform with an English accent. She also studied films such as The Weather Underground and read the autobiography of Menachem Begin. Portman received top billing for the film. Portman’s role in the film has parallels to her role as Mathilda Lando in the film Léon. [6] According to Portman: «the relationship between V and Evey has a complication [like] the relationship in that film. » Portman also had her head shaved on screen during a scene where her character is tortured.

Stephen Rea as Detective Chief Inspector Eric Finch: Finch is the lead inspector in the V investigation, who, during his investigation, uncovers an unspeakable government crime. Rea is no stranger to politics and terrorism, as he was once married to Dolours Price , a former member of the Provisional IRA , imprisoned for bombing the Old Bailey. When asked whether the politics attracted him to the film, Rea replied «Well, I don’t think it would be very interesting if it was just comic-book stuff. » «The politics of it are what gives it its dimension and momentum, and of course I was interested in the politics. Why wouldn’t I be? «

John Hurt as High Chancellor Adam Sutler : A former Conservative MP and Under-Secretary for Defence , Chancellor Sutler was the founder of Norsefire and is the de facto dictator of Britain. Hurt played a contrary role in another dystopian film: Winston Smith , a victim of the state in the film adaptation of Nineteen Eighty-Four.

Stephen Fry as Gordon Deitrich: Talk show host Gordon Deitrich is a closeted homosexual who, due to the restrictions of the regime, has «lost his appetite» over the years. When asked in an interview what he liked about the role, Fry replied «Being beaten up! I hadn’t been beaten up in a movie before and I was very excited by the idea of being clubbed to death. «

Tim Pigott-Smith as Peter Creedy : Creedy is both Norsefire’s party leader and the head of Britain’s Secret Police, the Finger, and also the main antagonist of the film. While Sutler is the Chancellor, the source of the government’s power over the people lies with Creedy. He is also revealed to be the mastermind of the bio-attack that gave Norsefire the chance to take over Britain. He comes under fire when the Chancellor threatens him after he fails to stop V. In the film’s climax , Creedy kills Sutler before meeting his own end when V strangles him.

Natasha Wightman as Valerie Page : Valerie, a lesbian , is one of the «social undesirables» imprisoned by the Norsefire government. Valerie was played by Imogen Poots in flashbacks to her childhood. Her symbolic role as a victim of the state was received positively by many LGBT critics. Film critic Michael Jensen praised Valerie’s scenes «not just because it is beautifully acted and well-written, but because it is so utterly unexpected [in a Hollywood film]. «

Roger Allam as Lewis Prothero: Lewis Prothero, «The Voice of London», is a mouthpiece for the Norsefire government. He was the former Commander of the Larkhill facility. He presented a show on the BTN (in Steve Moore’s novelization of the film, he is also an egomaniac and apparently addicted to illegally-obtained prescription drugs). V kills him with a drug overdose. Some critics and commentators have viewed him as a parody of American right-wing pundits such as. Bill O’Reilly, Morton Downey, Jr. and. Rush Limbaugh.

John Standingas Bishop Anthony James Lilliman: Lilliman is a corruptpaedophilebishop at. Westminster Abbey, installed into this position by Sutler. Lilliman was a Reverend at the Larkhill centre. He was warned by Evey Hammond when she was undercover as a prostitute, then disposed of by V in the same manner as Prothero. In regards to his role as Lilliman, Standing remarks «I thoroughly enjoyed playing Lilliman. . . because he’s slightly comic and utterly atrocious. Lovely to do. «

Sinéad Cusackas Dr. Delia Surridge: Dr. Surridge is the former head physician at the Larkhill detention centre, who had changed her name and become acoronerin London. V states that the torture and death at Larkhill was only possible because of her research. Surridge, unlike V’s other victims, feels remorse about the crimes she had committed. As opposed to the fates of Liliman and Prothero, she was killed through painlesslethal injectionin her sleep.