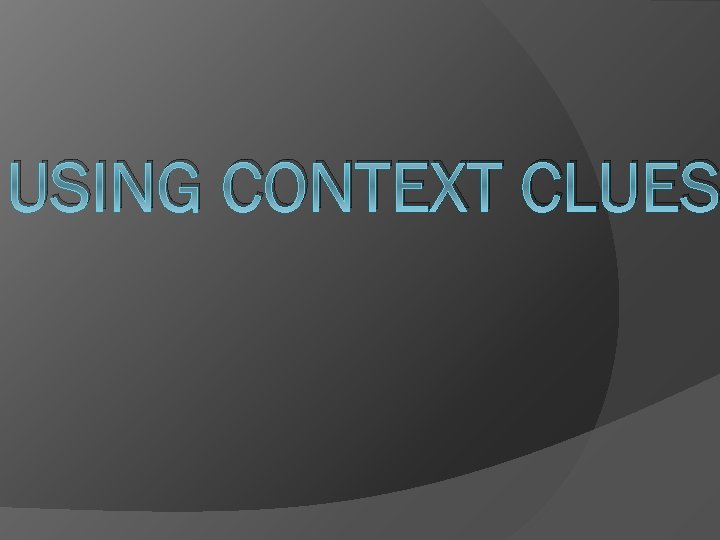 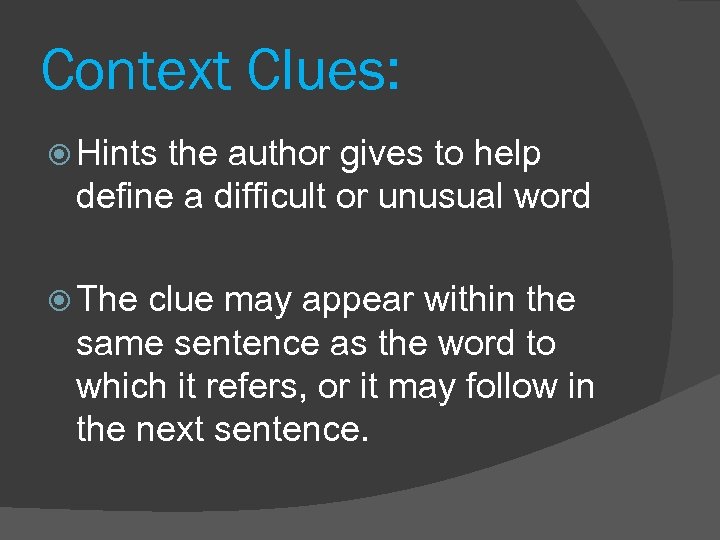 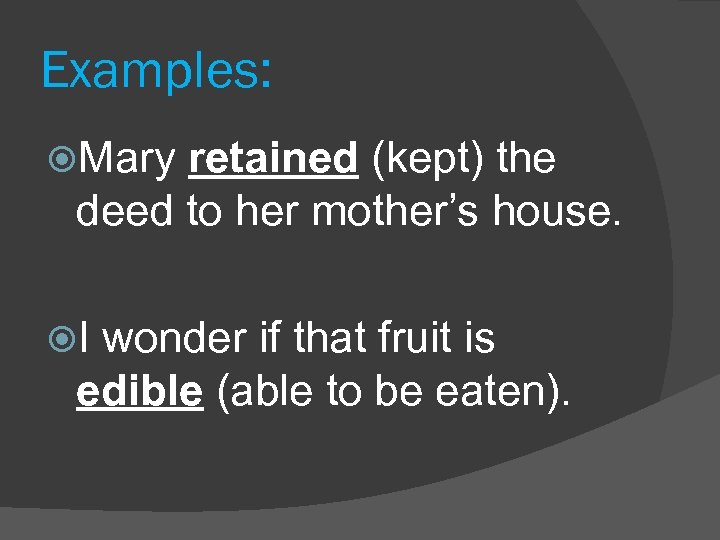 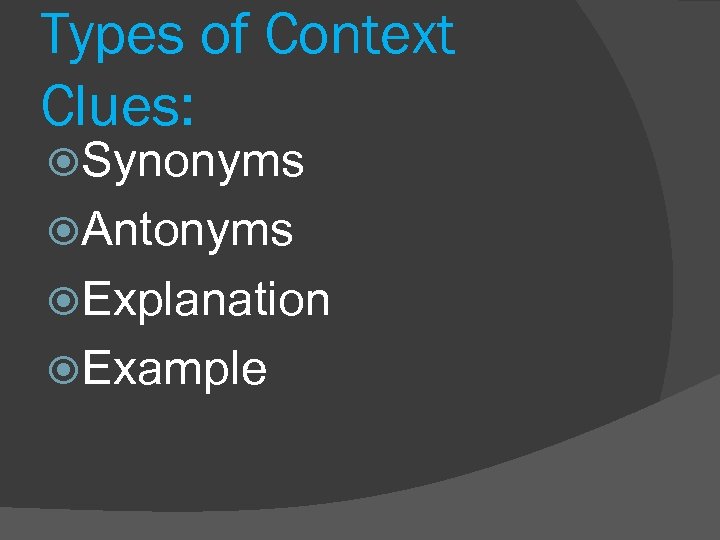 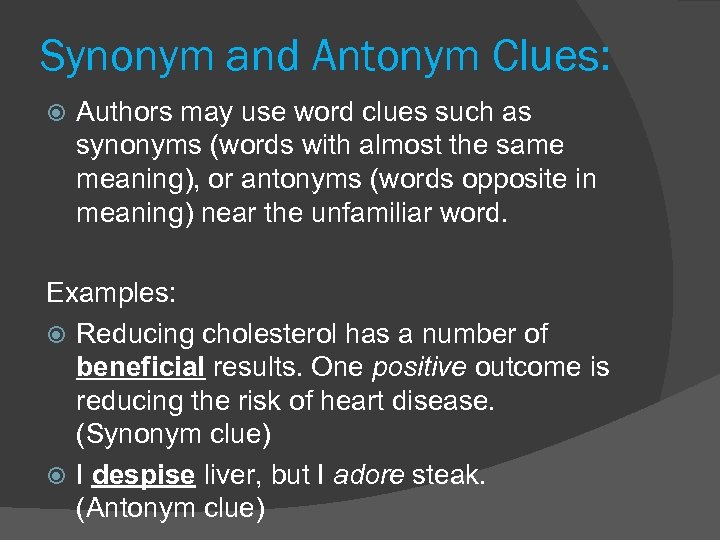 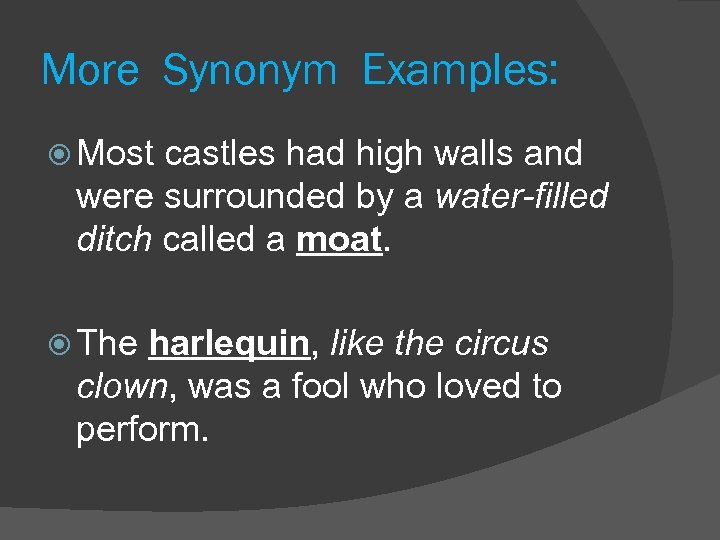 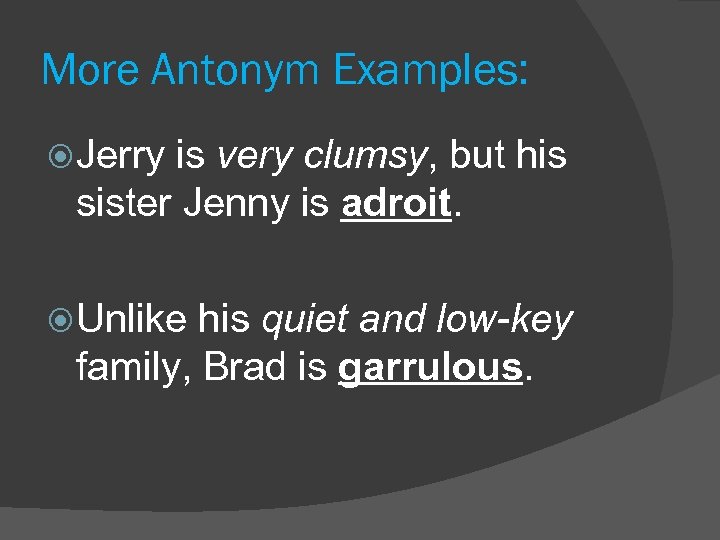 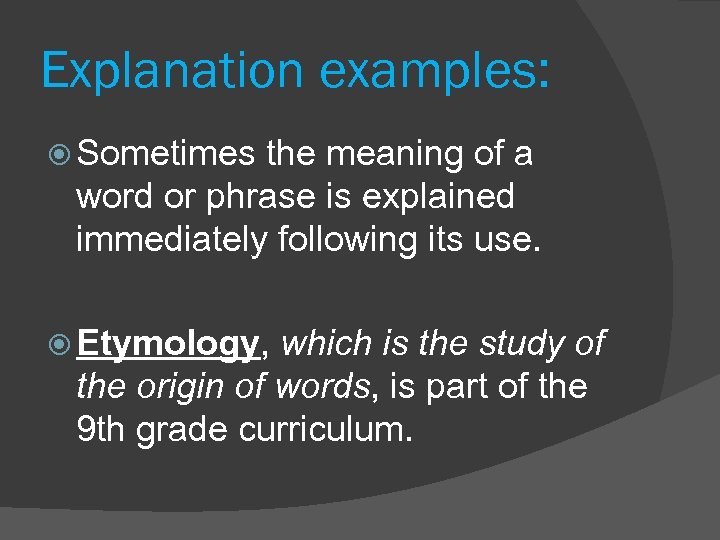 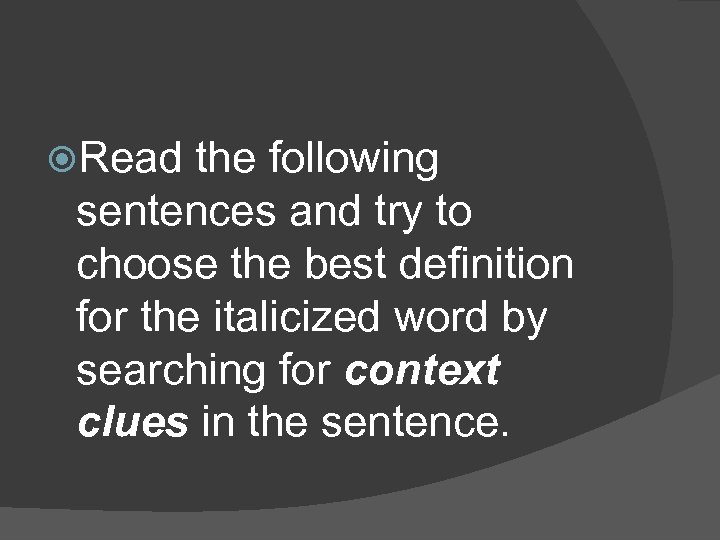 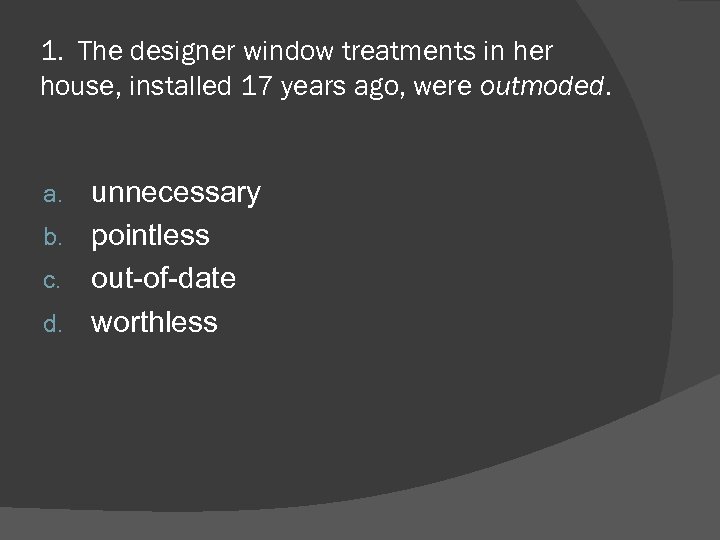 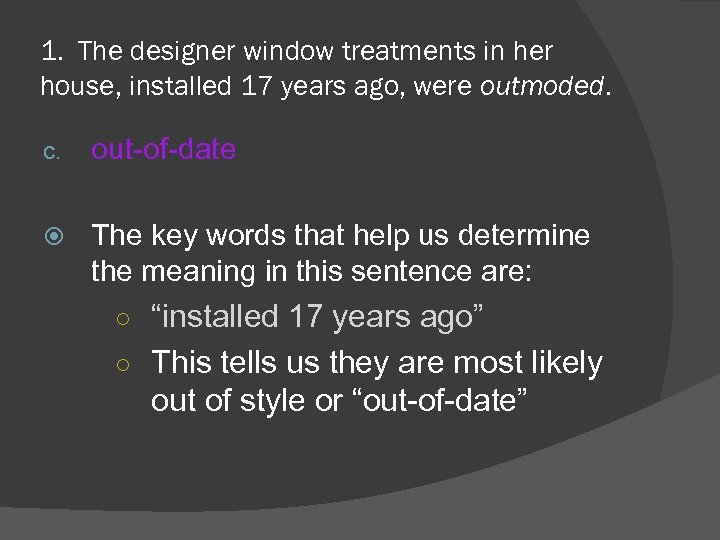 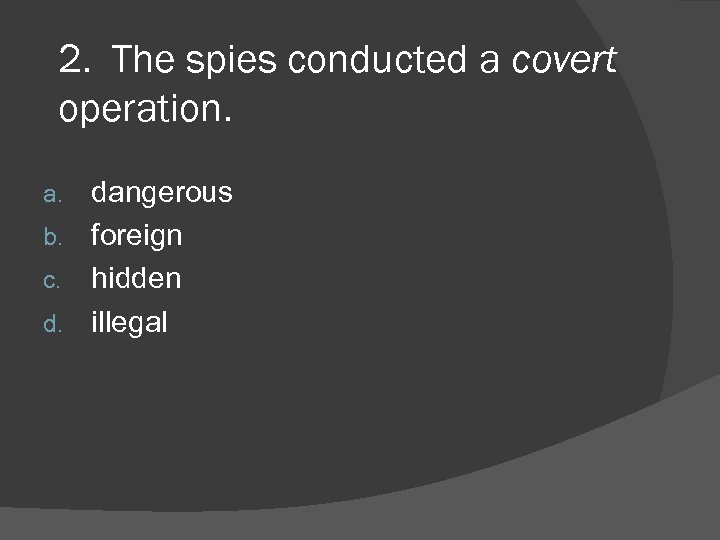 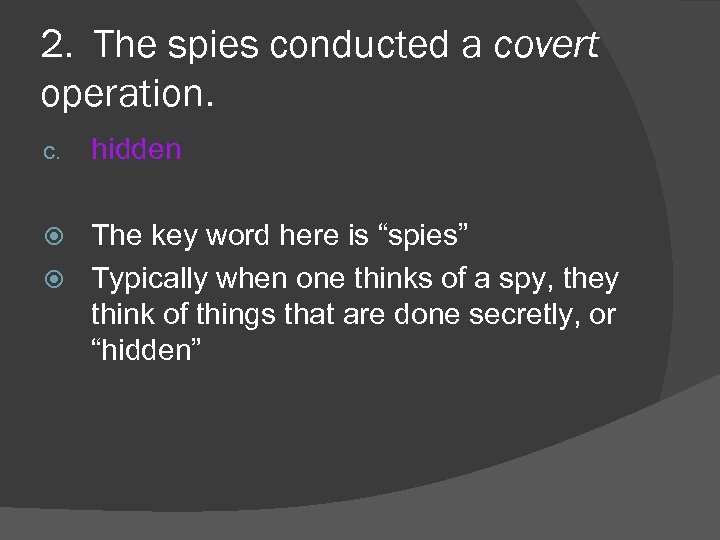 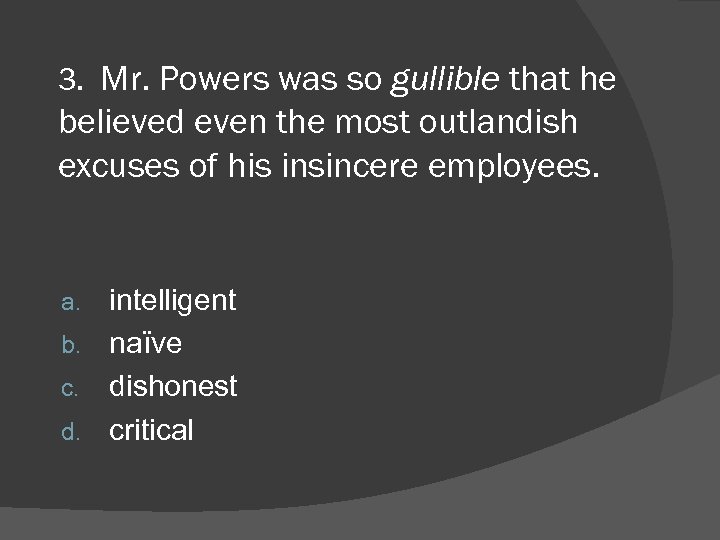 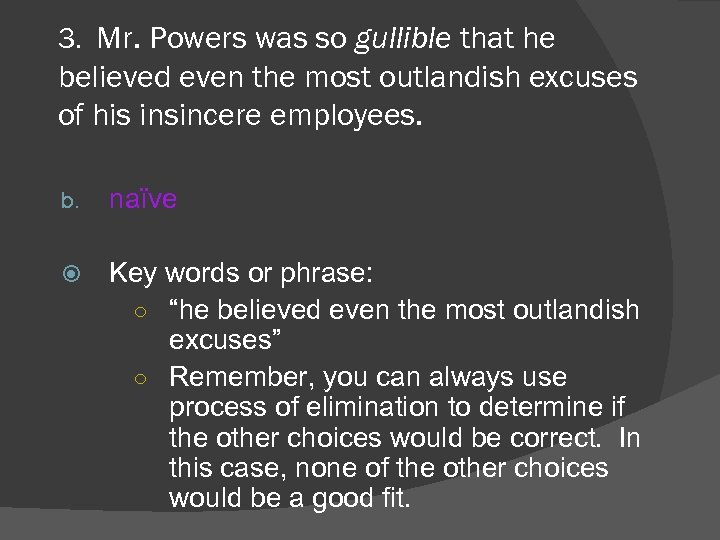 Context Clues: Hints the author gives to help define a difficult or unusual word The clue may appear within the same sentence as the word to which it refers, or it may follow in the next sentence.

Examples: Mary retained (kept) the deed to her mother’s house. I wonder if that fruit is edible (able to be eaten).

Synonym and Antonym Clues: Authors may use word clues such as synonyms (words with almost the same meaning), or antonyms (words opposite in meaning) near the unfamiliar word. Examples: Reducing cholesterol has a number of beneficial results. One positive outcome is reducing the risk of heart disease. (Synonym clue) I despise liver, but I adore steak. (Antonym clue)

More Synonym Examples: Most castles had high walls and were surrounded by a water-filled ditch called a moat. The harlequin, like the circus clown, was a fool who loved to perform.

More Antonym Examples: Jerry is very clumsy, but his sister Jenny is adroit. Unlike his quiet and low-key family, Brad is garrulous.

Explanation examples: Sometimes the meaning of a word or phrase is explained immediately following its use. Etymology, which is the study of the origin of words, is part of the 9 th grade curriculum.

Read the following sentences and try to choose the best definition for the italicized word by searching for context clues in the sentence.

1. The designer window treatments in her house, installed 17 years ago, were outmoded. unnecessary b. pointless c. out-of-date d. worthless a.

2. The spies conducted a covert operation. c. hidden The key word here is “spies” Typically when one thinks of a spy, they think of things that are done secretly, or “hidden”

3. Mr. Powers was so gullible that he believed even the most outlandish excuses of his insincere employees. intelligent b. naïve c. dishonest d. critical a.