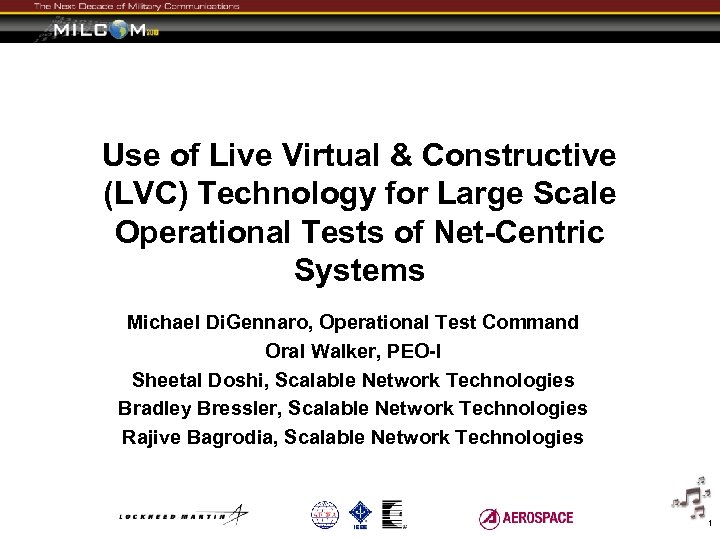 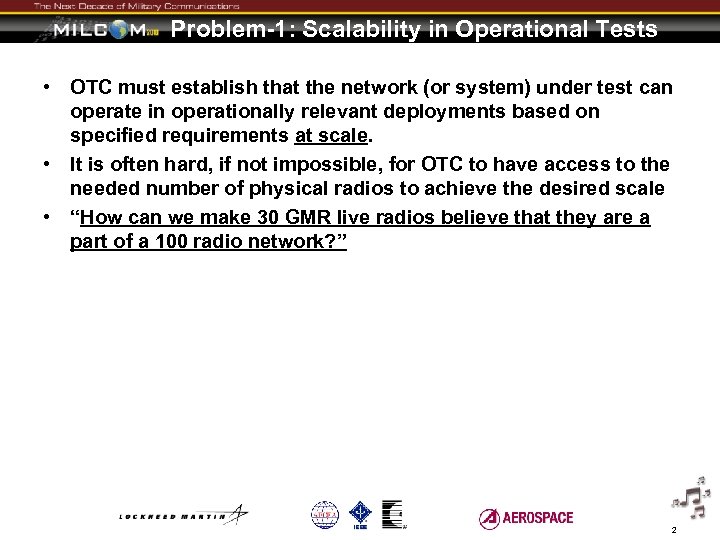 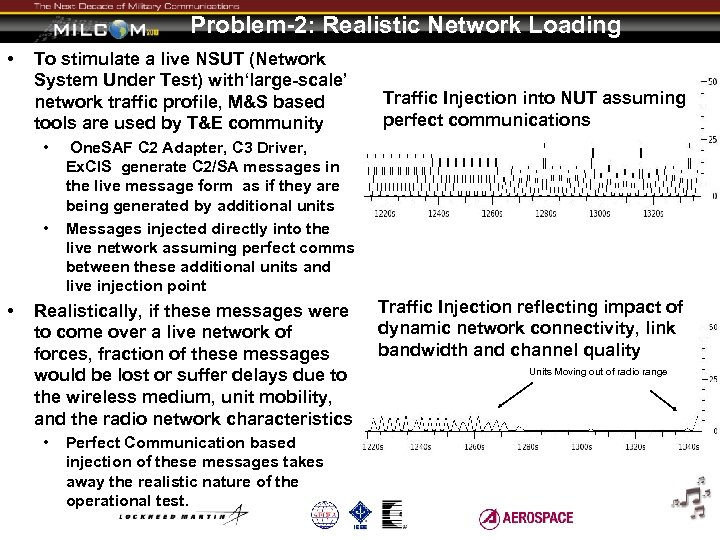 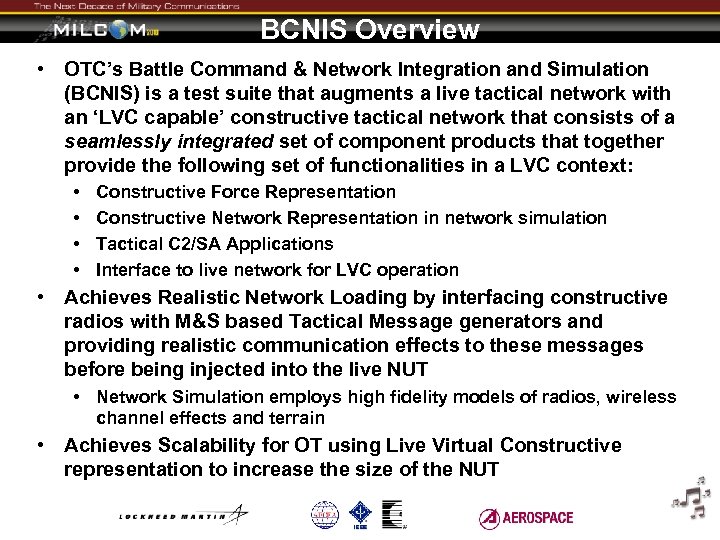 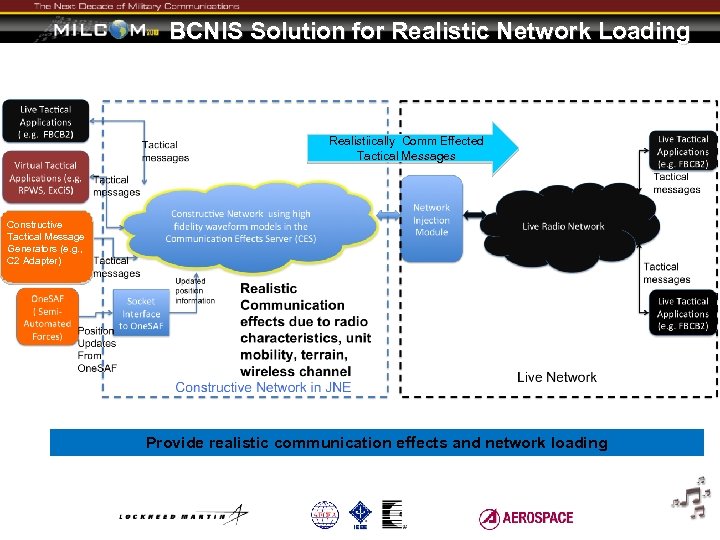 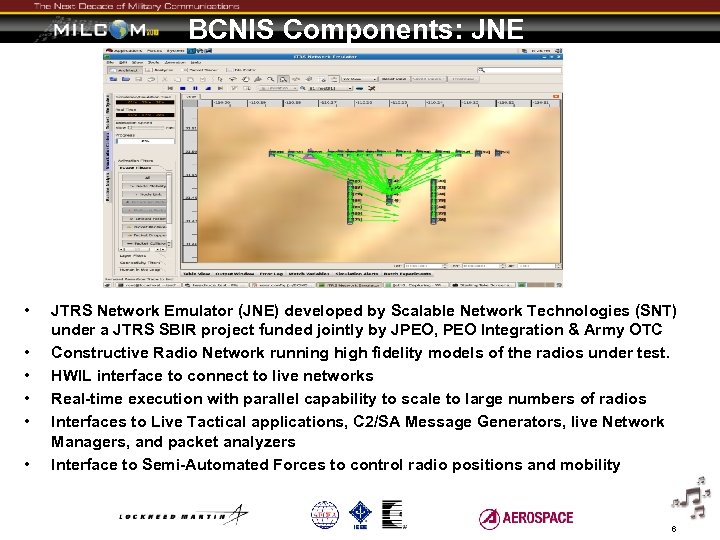 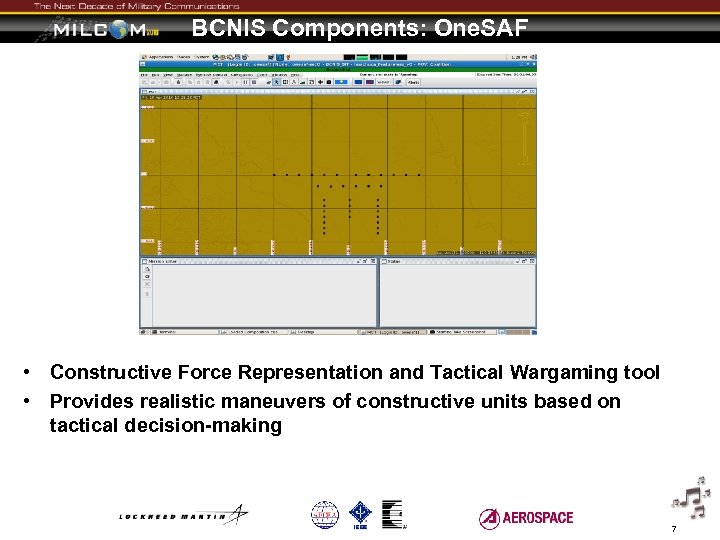 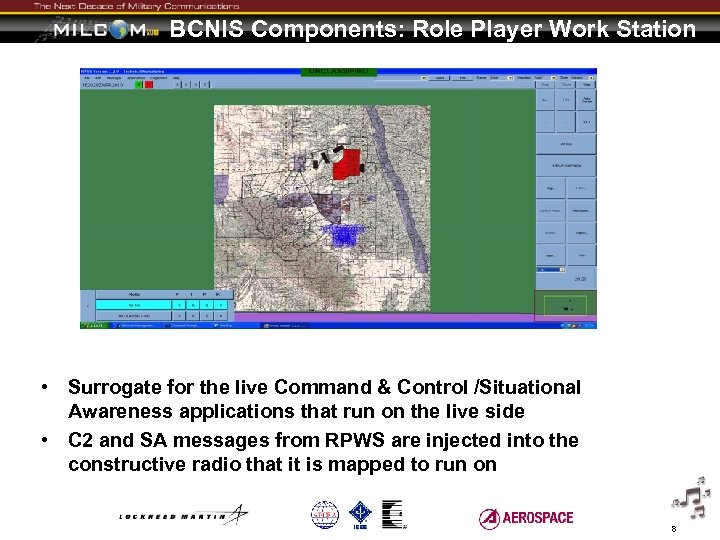 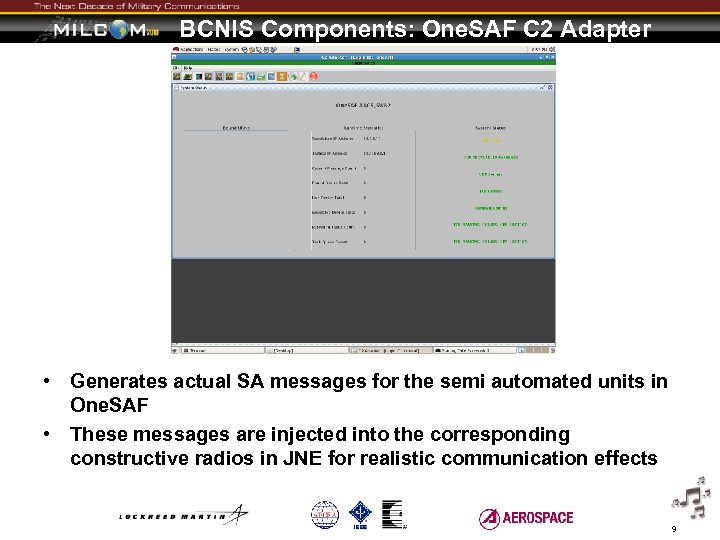 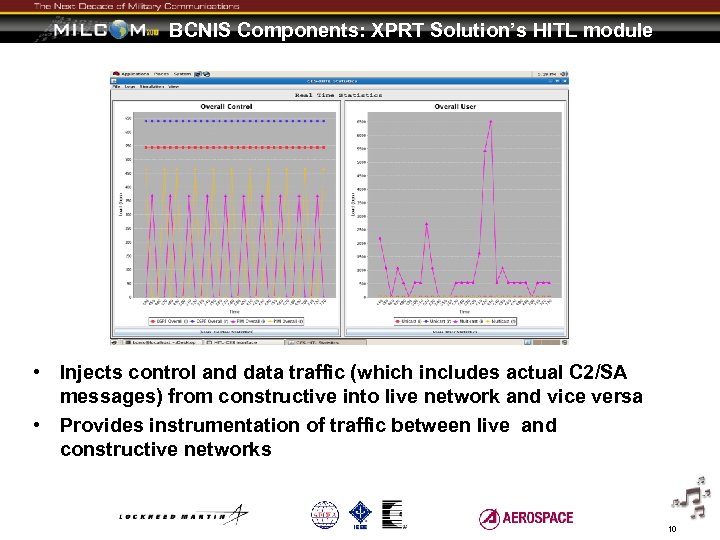 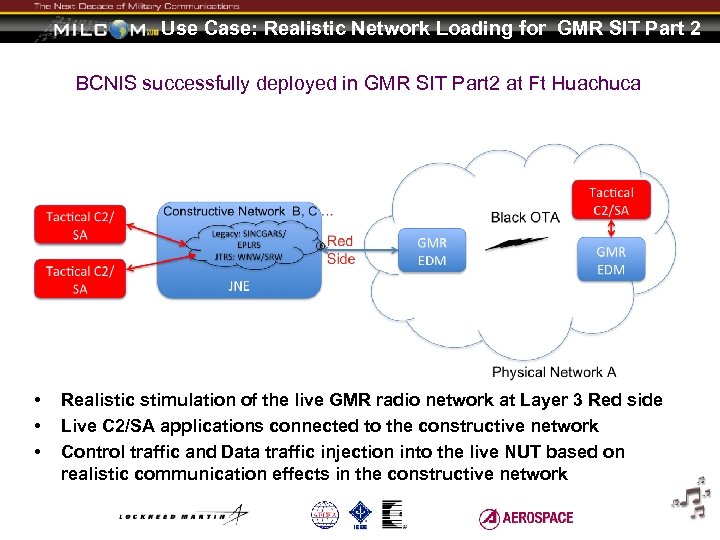 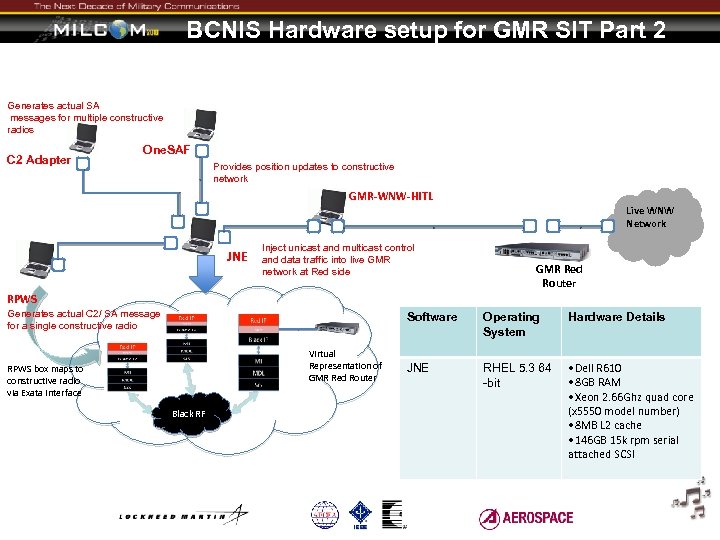 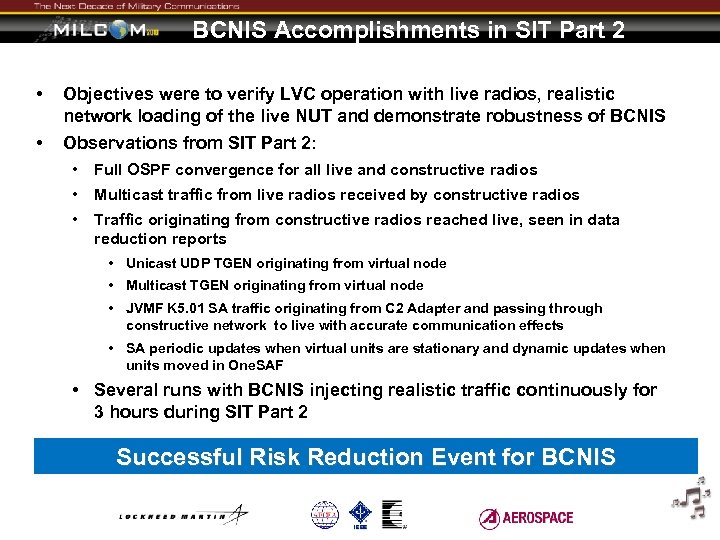 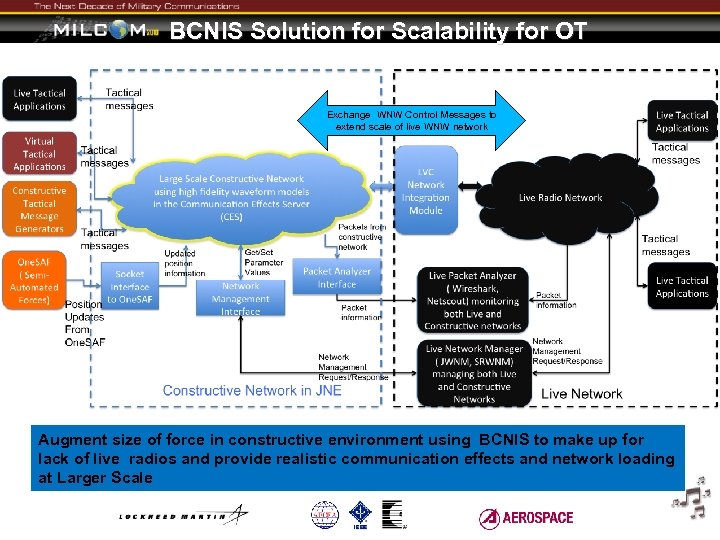 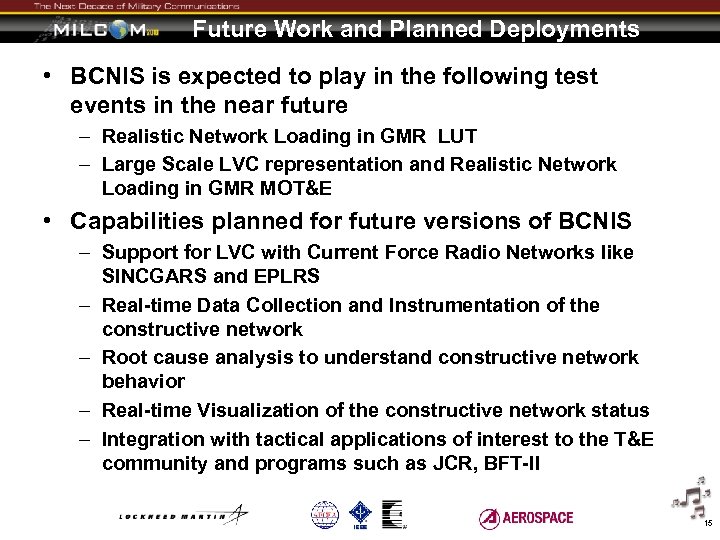 Problem-1: Scalability in Operational Tests • OTC must establish that the network (or system) under test can operate in operationally relevant deployments based on specified requirements at scale. • It is often hard, if not impossible, for OTC to have access to the needed number of physical radios to achieve the desired scale • “How can we make 30 GMR live radios believe that they are a part of a 100 radio network? ” 2

Problem-2: Realistic Network Loading • To stimulate a live NSUT (Network System Under Test) with‘large-scale’ network traffic profile, M&S based tools are used by T&E community • • • One. SAF C 2 Adapter, C 3 Driver, Ex. CIS generate C 2/SA messages in the live message form as if they are being generated by additional units Messages injected directly into the live network assuming perfect comms between these additional units and live injection point Realistically, if these messages were to come over a live network of forces, fraction of these messages would be lost or suffer delays due to the wireless medium, unit mobility, and the radio network characteristics • Traffic Injection into NUT assuming perfect communications Perfect Communication based injection of these messages takes away the realistic nature of the operational test. Traffic Injection reflecting impact of dynamic network connectivity, link bandwidth and channel quality Units Moving out of radio range

BCNIS Components: Role Player Work Station • Surrogate for the live Command & Control /Situational Awareness applications that run on the live side • C 2 and SA messages from RPWS are injected into the constructive radio that it is mapped to run on 8

BCNIS Components: One. SAF C 2 Adapter • Generates actual SA messages for the semi automated units in One. SAF • These messages are injected into the corresponding constructive radios in JNE for realistic communication effects 9

Future Work and Planned Deployments • BCNIS is expected to play in the following test events in the near future – Realistic Network Loading in GMR LUT – Large Scale LVC representation and Realistic Network Loading in GMR MOT&E • Capabilities planned for future versions of BCNIS – Support for LVC with Current Force Radio Networks like SINCGARS and EPLRS – Real-time Data Collection and Instrumentation of the constructive network – Root cause analysis to understand constructive network behavior – Real-time Visualization of the constructive network status – Integration with tactical applications of interest to the T&E community and programs such as JCR, BFT-II 15