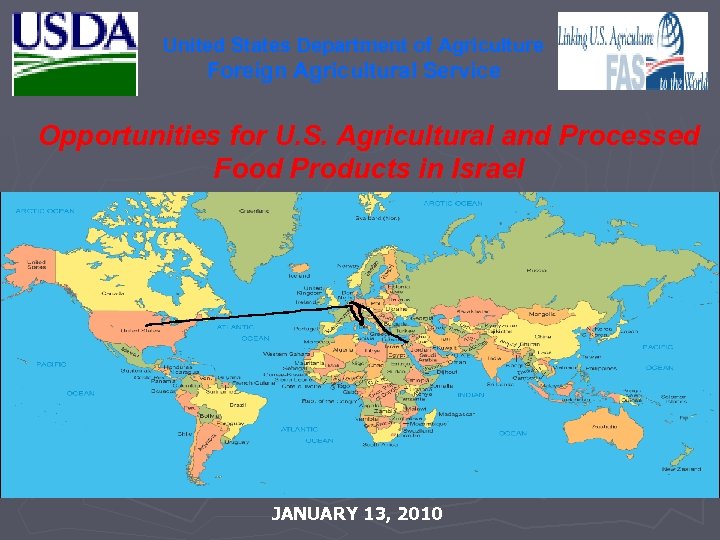 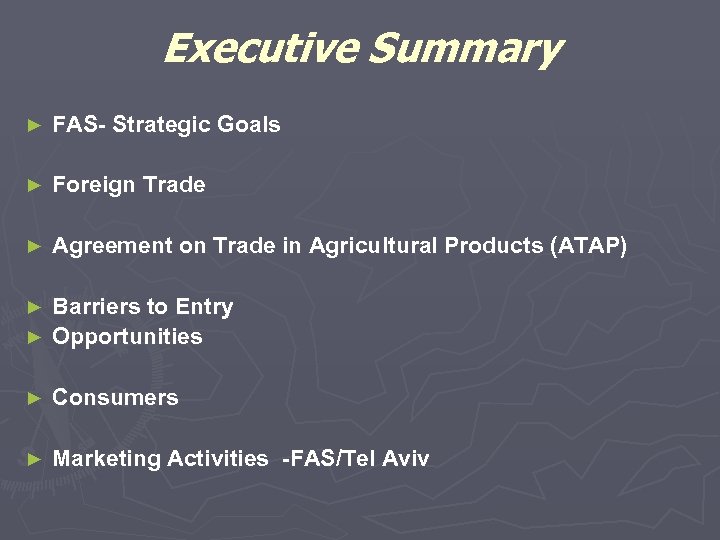 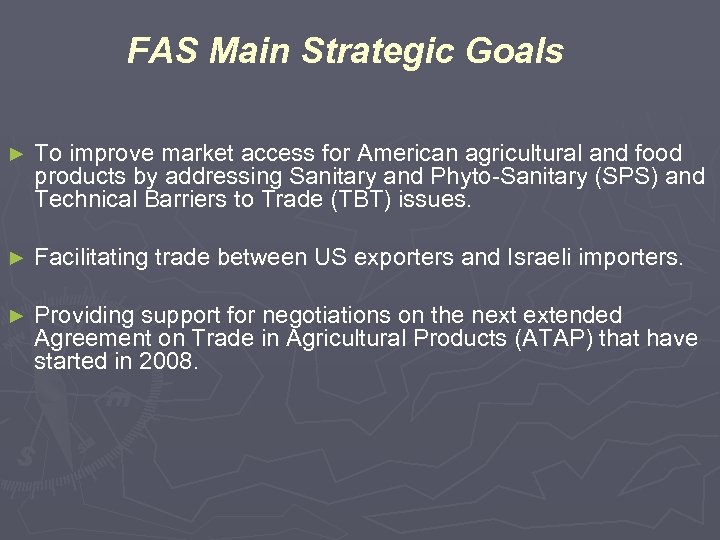 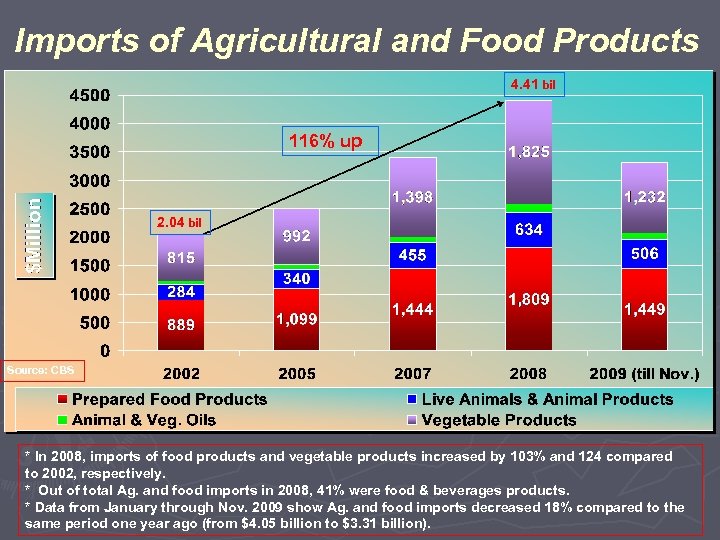 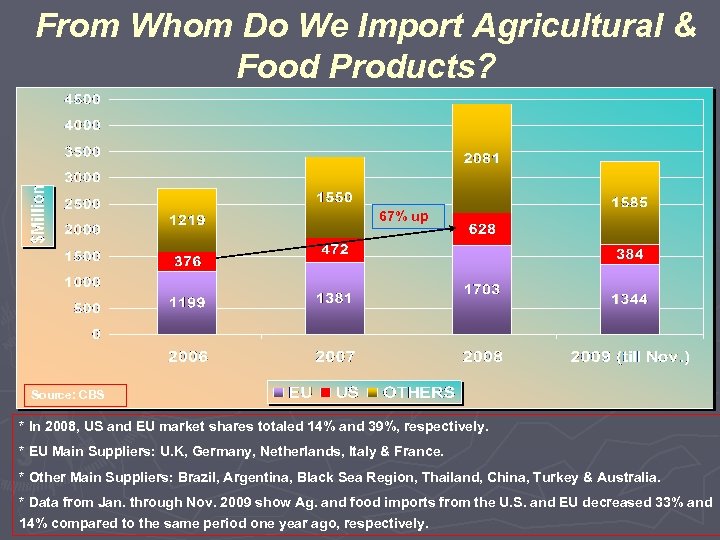 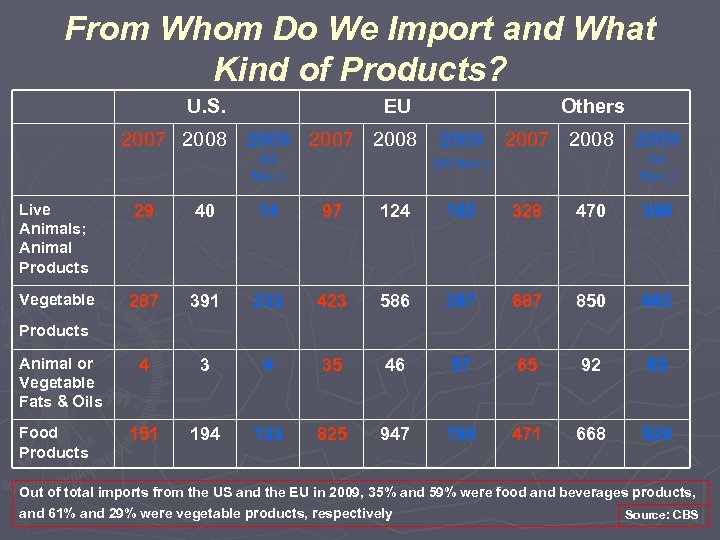 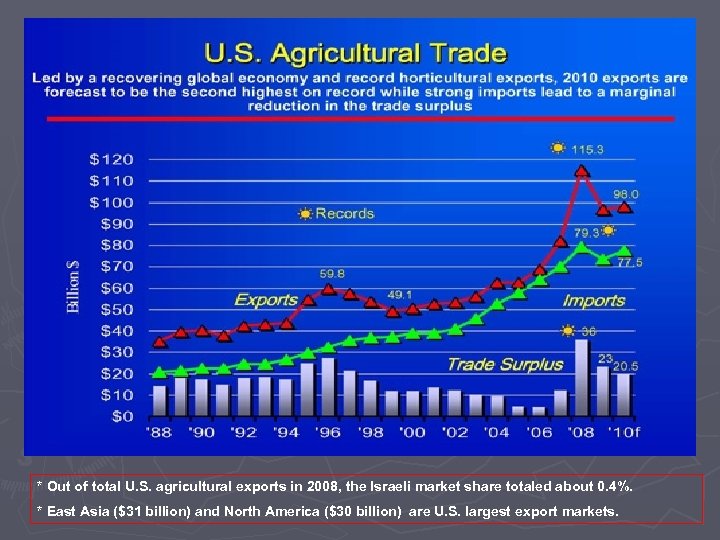 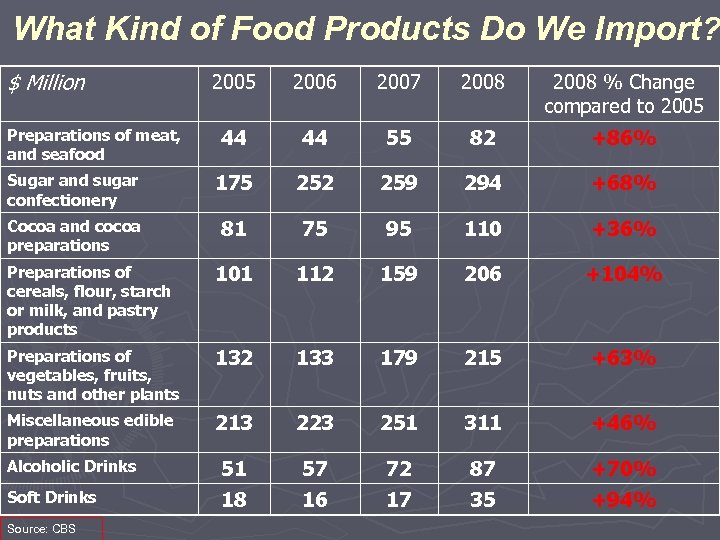 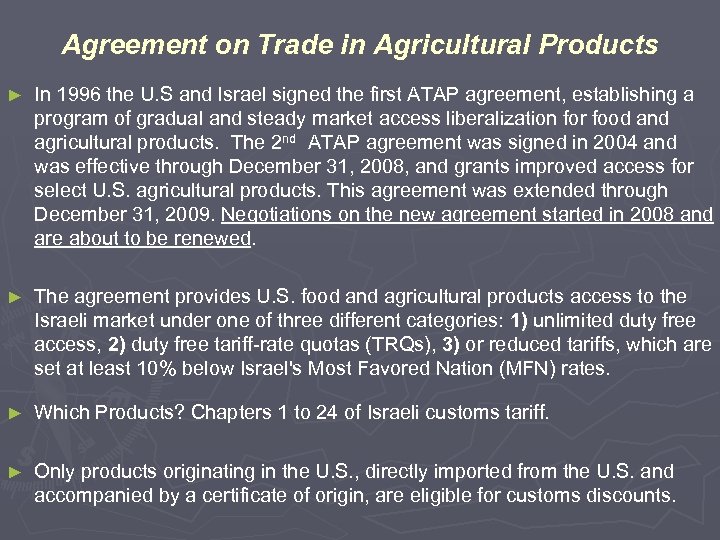 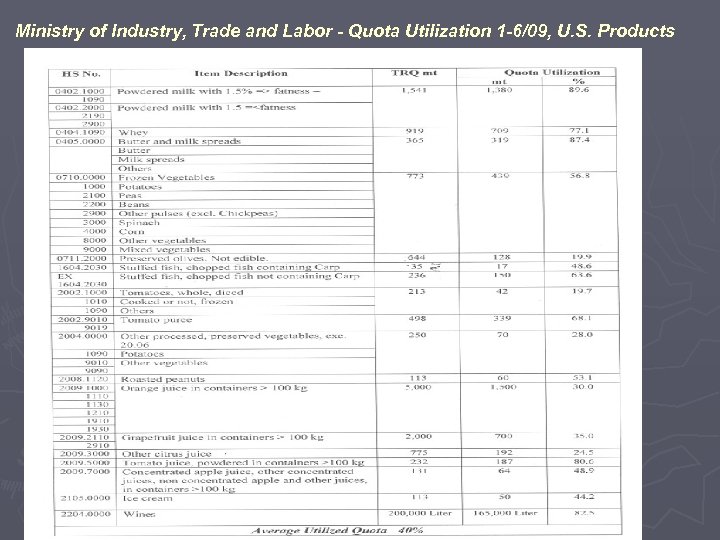 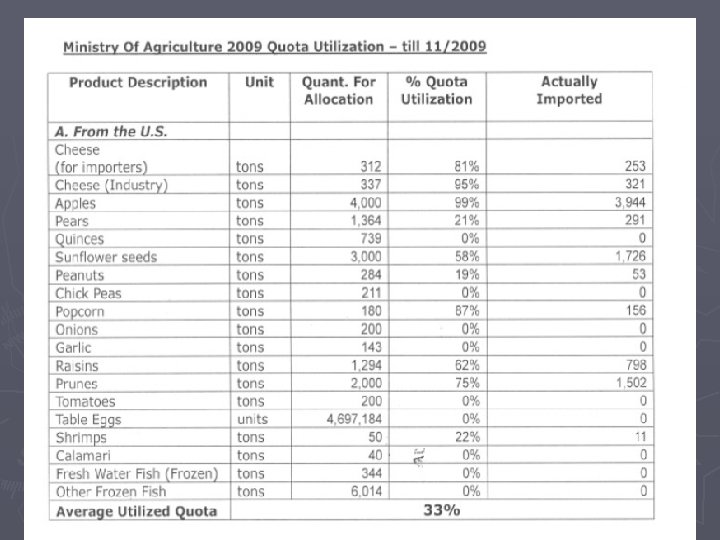 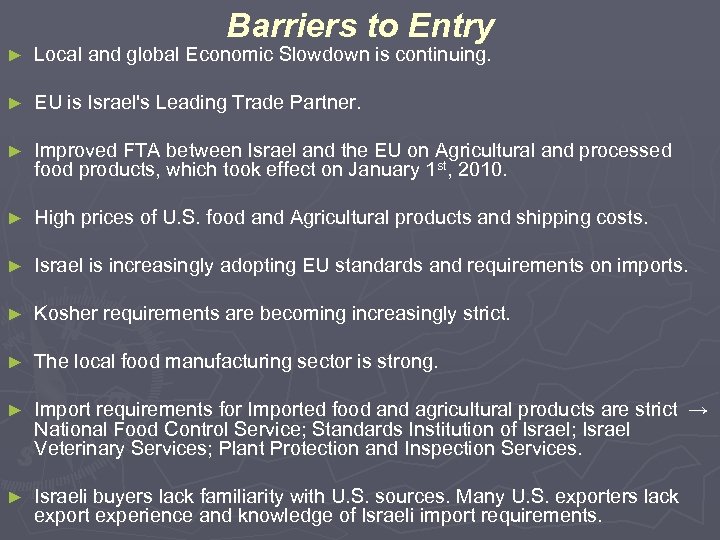 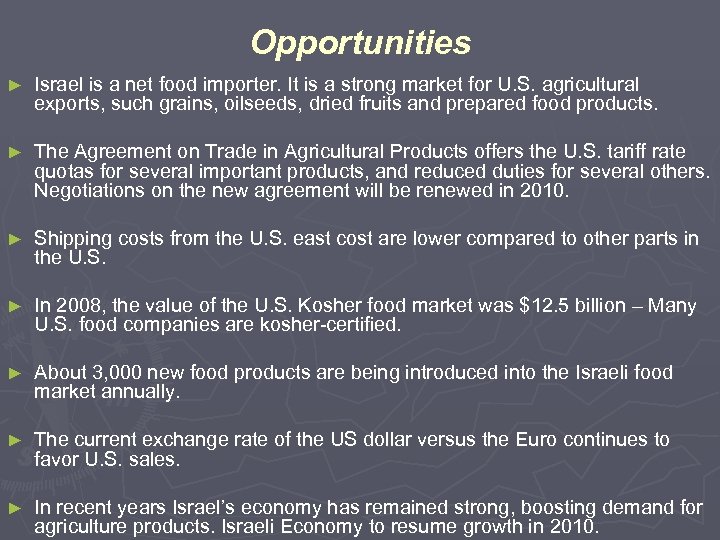 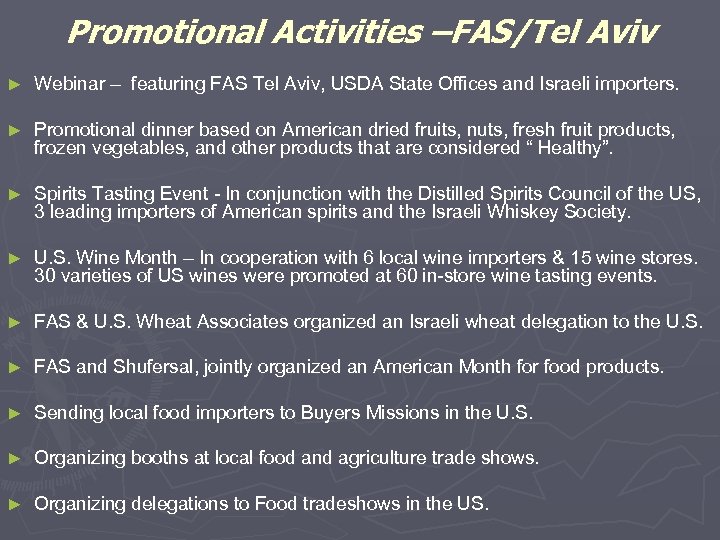 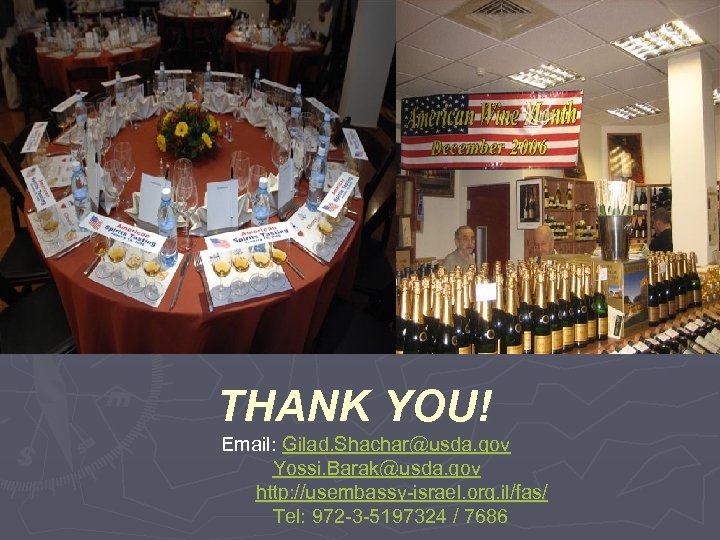 FAS Main Strategic Goals ► To improve market access for American agricultural and food products by addressing Sanitary and Phyto-Sanitary (SPS) and Technical Barriers to Trade (TBT) issues. ► Facilitating trade between US exporters and Israeli importers. ► Providing support for negotiations on the next extended Agreement on Trade in Agricultural Products (ATAP) that have started in 2008.

From Whom Do We Import Agricultural & Food Products? 67% up Source: CBS * In 2008, US and EU market shares totaled 14% and 39%, respectively. * EU Main Suppliers: U. K, Germany, Netherlands, Italy & France. * Other Main Suppliers: Brazil, Argentina, Black Sea Region, Thailand, China, Turkey & Australia. * Data from Jan. through Nov. 2009 show Ag. and food imports from the U. S. and EU decreased 33% and 14% compared to the same period one year ago, respectively.

Agreement on Trade in Agricultural Products ► In 1996 the U. S and Israel signed the first ATAP agreement, establishing a program of gradual and steady market access liberalization for food and agricultural products. The 2 nd ATAP agreement was signed in 2004 and was effective through December 31, 2008, and grants improved access for select U. S. agricultural products. This agreement was extended through December 31, 2009. Negotiations on the new agreement started in 2008 and are about to be renewed. ► The agreement provides U. S. food and agricultural products access to the Israeli market under one of three different categories: 1) unlimited duty free access, 2) duty free tariff-rate quotas (TRQs), 3) or reduced tariffs, which are set at least 10% below Israel's Most Favored Nation (MFN) rates. ► Which Products? Chapters 1 to 24 of Israeli customs tariff. ► Only products originating in the U. S. , directly imported from the U. S. and accompanied by a certificate of origin, are eligible for customs discounts.

Opportunities ► Israel is a net food importer. It is a strong market for U. S. agricultural exports, such grains, oilseeds, dried fruits and prepared food products. ► The Agreement on Trade in Agricultural Products offers the U. S. tariff rate quotas for several important products, and reduced duties for several others. Negotiations on the new agreement will be renewed in 2010. ► Shipping costs from the U. S. east cost are lower compared to other parts in the U. S. ► In 2008, the value of the U. S. Kosher food market was $12. 5 billion – Many U. S. food companies are kosher-certified. ► About 3, 000 new food products are being introduced into the Israeli food market annually. ► The current exchange rate of the US dollar versus the Euro continues to favor U. S. sales. ► In recent years Israel’s economy has remained strong, boosting demand for agriculture products. Israeli Economy to resume growth in 2010.

Promotional Activities –FAS/Tel Aviv ► Webinar – featuring FAS Tel Aviv, USDA State Offices and Israeli importers. ► Promotional dinner based on American dried fruits, nuts, fresh fruit products, frozen vegetables, and other products that are considered “ Healthy”. ► Spirits Tasting Event - In conjunction with the Distilled Spirits Council of the US, 3 leading importers of American spirits and the Israeli Whiskey Society. ► U. S. Wine Month – In cooperation with 6 local wine importers & 15 wine stores. 30 varieties of US wines were promoted at 60 in-store wine tasting events. ► FAS & U. S. Wheat Associates organized an Israeli wheat delegation to the U. S. ► FAS and Shufersal, jointly organized an American Month for food products. ► Sending local food importers to Buyers Missions in the U. S. ► Organizing booths at local food and agriculture trade shows. ► Organizing delegations to Food tradeshows in the US.