Unit 11 Globalization and Interdependence Advancements in 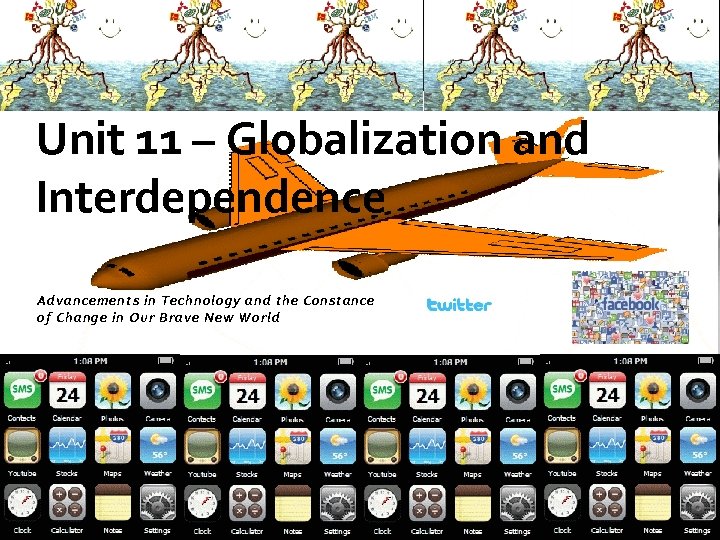 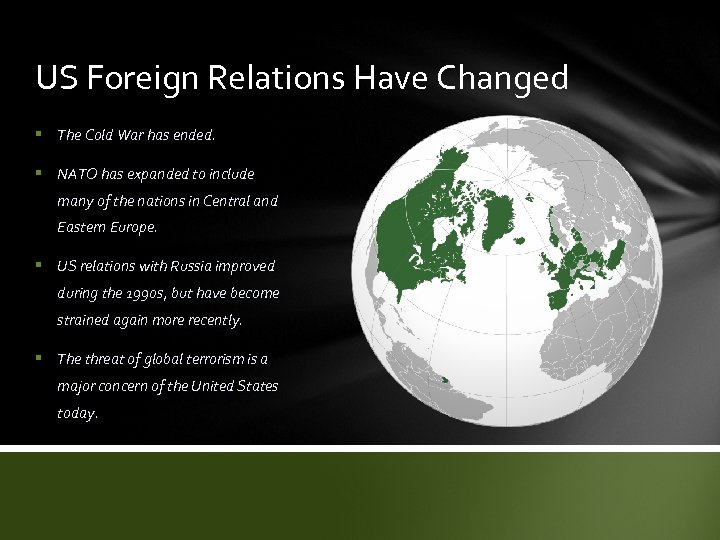 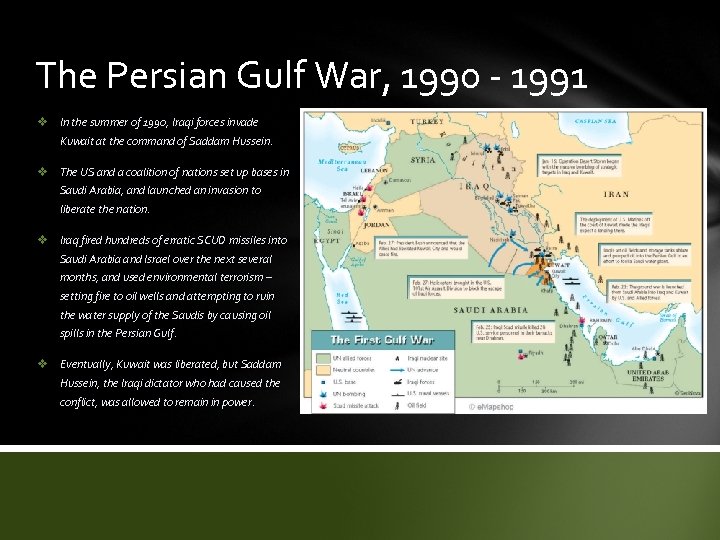 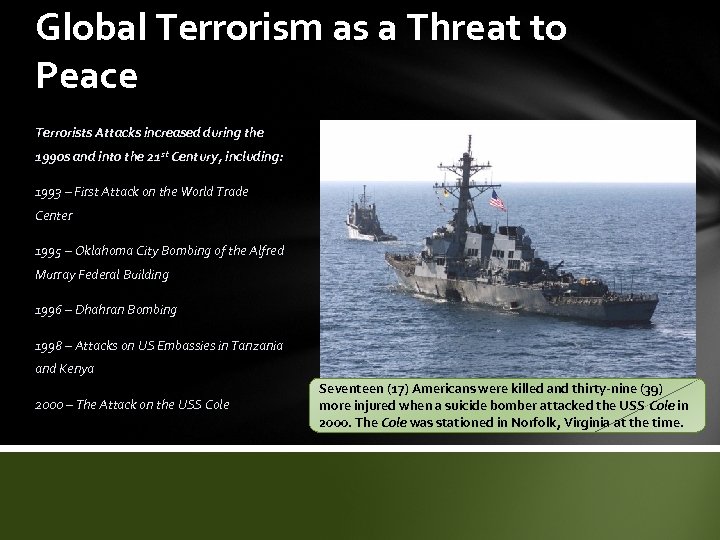 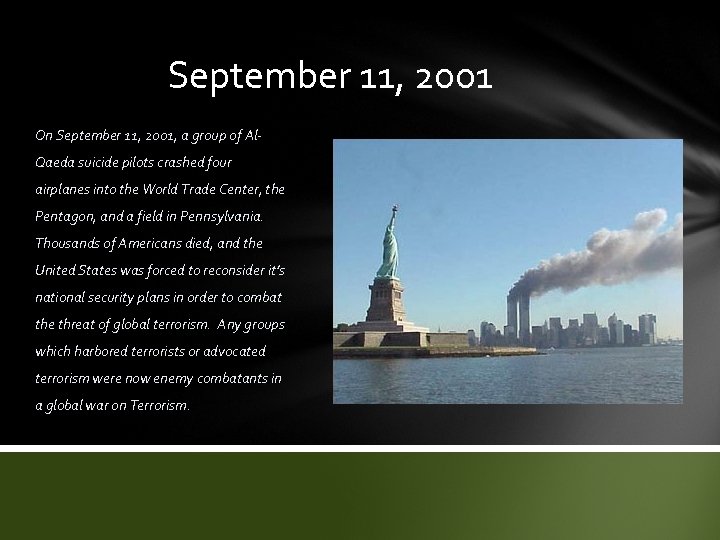 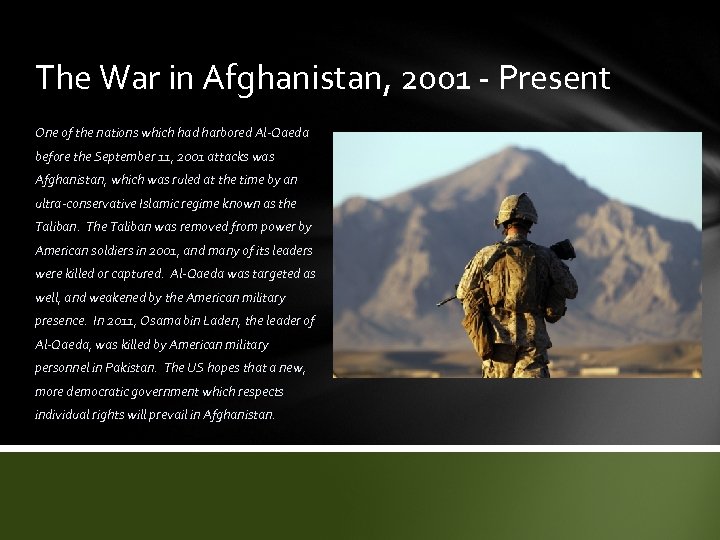 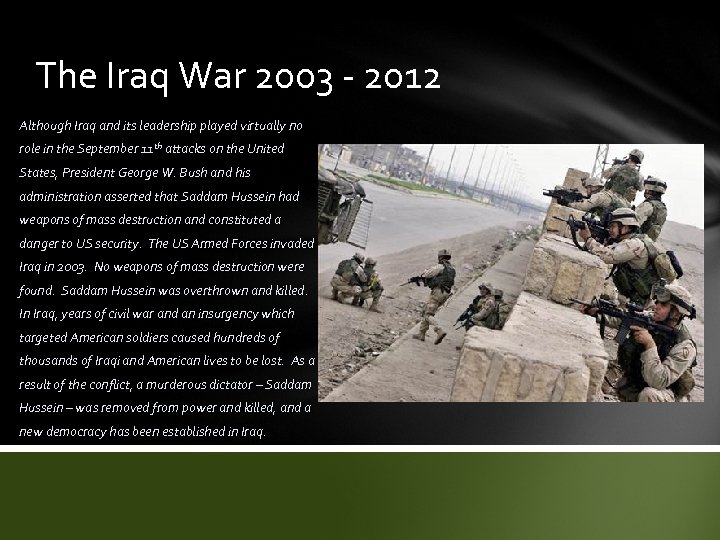 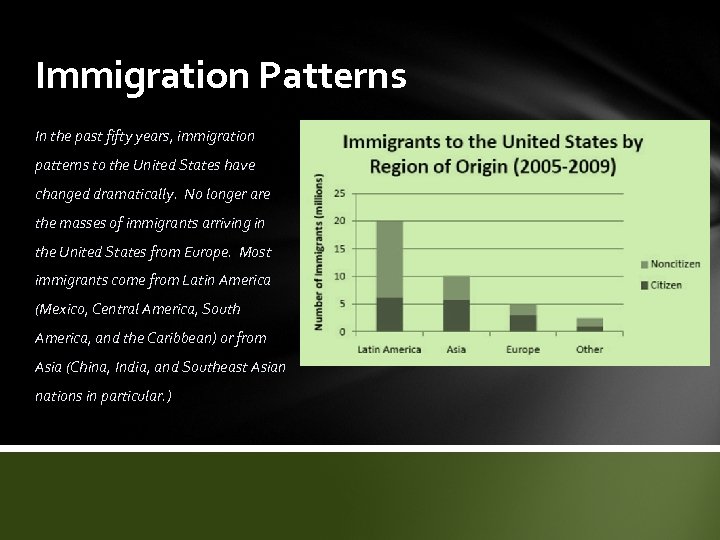 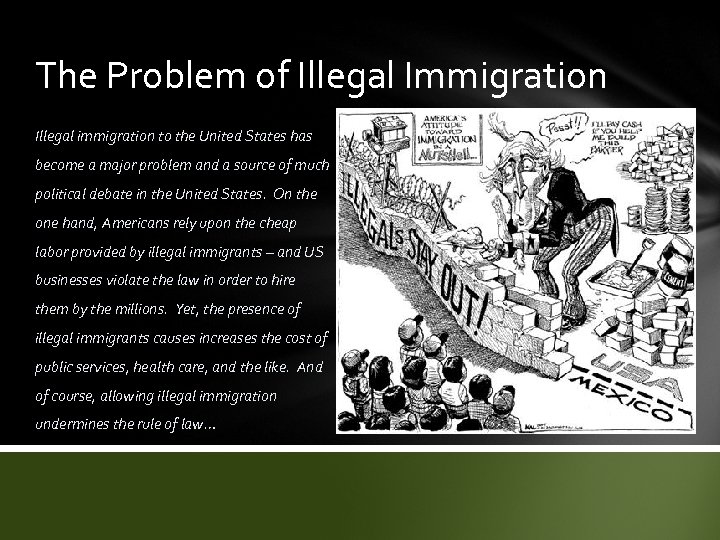 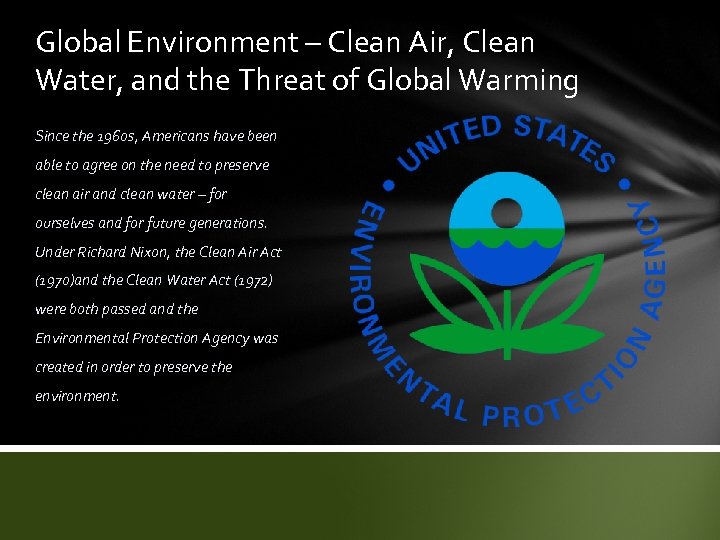 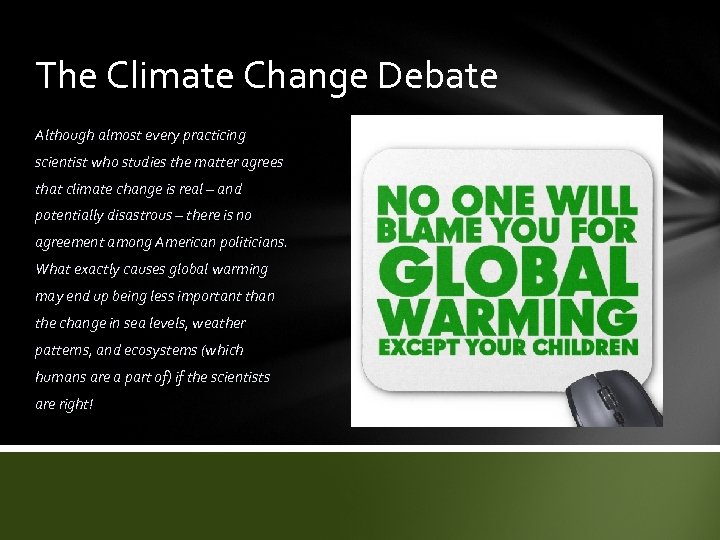 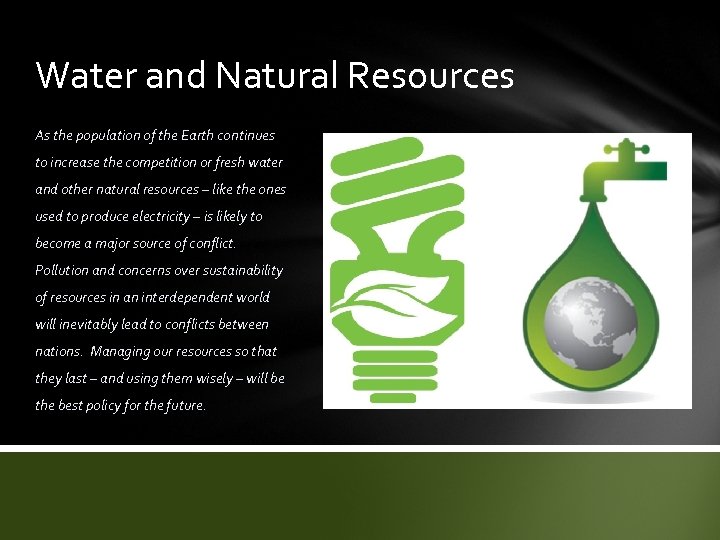 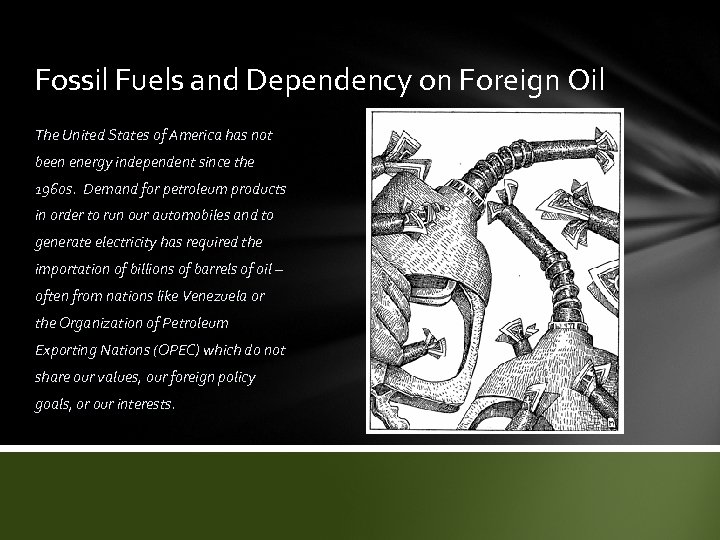 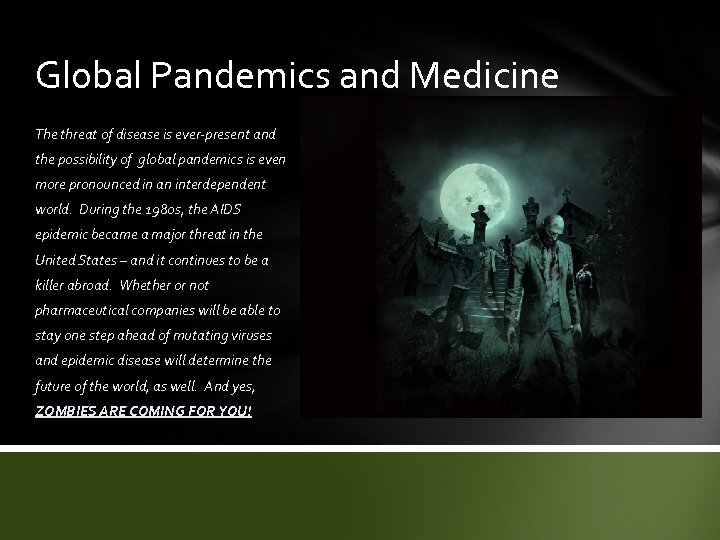 US Foreign Relations Have Changed § The Cold War has ended. § NATO has expanded to include many of the nations in Central and Eastern Europe. § US relations with Russia improved during the 1990 s, but have become strained again more recently. § The threat of global terrorism is a major concern of the United States today.

The Persian Gulf War, 1990 - 1991 v In the summer of 1990, Iraqi forces invade Kuwait at the command of Saddam Hussein. v The US and a coalition of nations set up bases in Saudi Arabia, and launched an invasion to liberate the nation. v Iraq fired hundreds of erratic SCUD missiles into Saudi Arabia and Israel over the next several months, and used environmental terrorism – setting fire to oil wells and attempting to ruin the water supply of the Saudis by causing oil spills in the Persian Gulf. v Eventually, Kuwait was liberated, but Saddam Hussein, the Iraqi dictator who had caused the conflict, was allowed to remain in power.

Global Terrorism as a Threat to Peace Terrorists Attacks increased during the 1990 s and into the 21 st Century, including: 1993 – First Attack on the World Trade Center 1995 – Oklahoma City Bombing of the Alfred Murray Federal Building 1996 – Dhahran Bombing 1998 – Attacks on US Embassies in Tanzania and Kenya 2000 – The Attack on the USS Cole Seventeen (17) Americans were killed and thirty-nine (39) more injured when a suicide bomber attacked the USS Cole in 2000. The Cole was stationed in Norfolk, Virginia at the time.

September 11, 2001 On September 11, 2001, a group of Al. Qaeda suicide pilots crashed four airplanes into the World Trade Center, the Pentagon, and a field in Pennsylvania. Thousands of Americans died, and the United States was forced to reconsider it’s national security plans in order to combat the threat of global terrorism. Any groups which harbored terrorists or advocated terrorism were now enemy combatants in a global war on Terrorism.

The War in Afghanistan, 2001 - Present One of the nations which had harbored Al-Qaeda before the September 11, 2001 attacks was Afghanistan, which was ruled at the time by an ultra-conservative Islamic regime known as the Taliban. The Taliban was removed from power by American soldiers in 2001, and many of its leaders were killed or captured. Al-Qaeda was targeted as well, and weakened by the American military presence. In 2011, Osama bin Laden, the leader of Al-Qaeda, was killed by American military personnel in Pakistan. The US hopes that a new, more democratic government which respects individual rights will prevail in Afghanistan.

The Iraq War 2003 - 2012 Although Iraq and its leadership played virtually no role in the September 11 th attacks on the United States, President George W. Bush and his administration asserted that Saddam Hussein had weapons of mass destruction and constituted a danger to US security. The US Armed Forces invaded Iraq in 2003. No weapons of mass destruction were found. Saddam Hussein was overthrown and killed. In Iraq, years of civil war and an insurgency which targeted American soldiers caused hundreds of thousands of Iraqi and American lives to be lost. As a result of the conflict, a murderous dictator – Saddam Hussein – was removed from power and killed, and a new democracy has been established in Iraq.

Immigration Patterns In the past fifty years, immigration patterns to the United States have changed dramatically. No longer are the masses of immigrants arriving in the United States from Europe. Most immigrants come from Latin America (Mexico, Central America, South America, and the Caribbean) or from Asia (China, India, and Southeast Asian nations in particular. )

Global Environment – Clean Air, Clean Water, and the Threat of Global Warming Since the 1960 s, Americans have been able to agree on the need to preserve clean air and clean water – for ourselves and for future generations. Under Richard Nixon, the Clean Air Act (1970)and the Clean Water Act (1972) were both passed and the Environmental Protection Agency was created in order to preserve the environment.

The Climate Change Debate Although almost every practicing scientist who studies the matter agrees that climate change is real – and potentially disastrous – there is no agreement among American politicians. What exactly causes global warming may end up being less important than the change in sea levels, weather patterns, and ecosystems (which humans are a part of) if the scientists are right!

Water and Natural Resources As the population of the Earth continues to increase the competition or fresh water and other natural resources – like the ones used to produce electricity – is likely to become a major source of conflict. Pollution and concerns over sustainability of resources in an interdependent world will inevitably lead to conflicts between nations. Managing our resources so that they last – and using them wisely – will be the best policy for the future.

Fossil Fuels and Dependency on Foreign Oil The United States of America has not been energy independent since the 1960 s. Demand for petroleum products in order to run our automobiles and to generate electricity has required the importation of billions of barrels of oil – often from nations like Venezuela or the Organization of Petroleum Exporting Nations (OPEC) which do not share our values, our foreign policy goals, or our interests.

Global Pandemics and Medicine The threat of disease is ever-present and the possibility of global pandemics is even more pronounced in an interdependent world. During the 1980 s, the AIDS epidemic became a major threat in the United States – and it continues to be a killer abroad. Whether or not pharmaceutical companies will be able to stay one step ahead of mutating viruses and epidemic disease will determine the future of the world, as well. And yes, ZOMBIES ARE COMING FOR YOU!