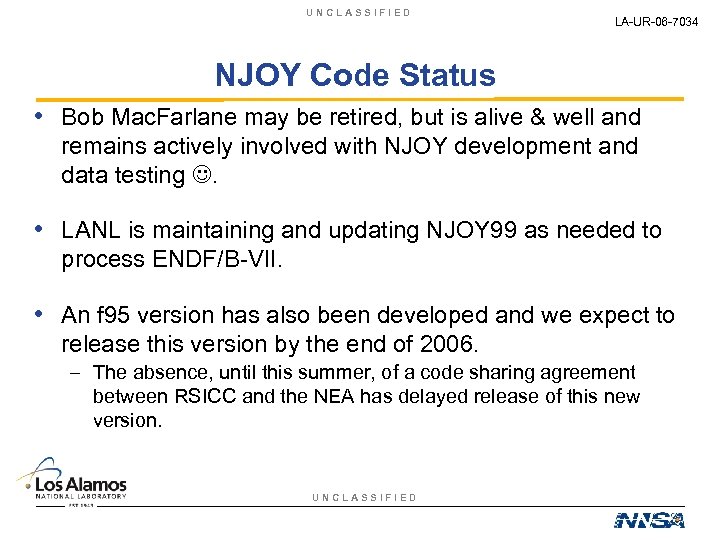 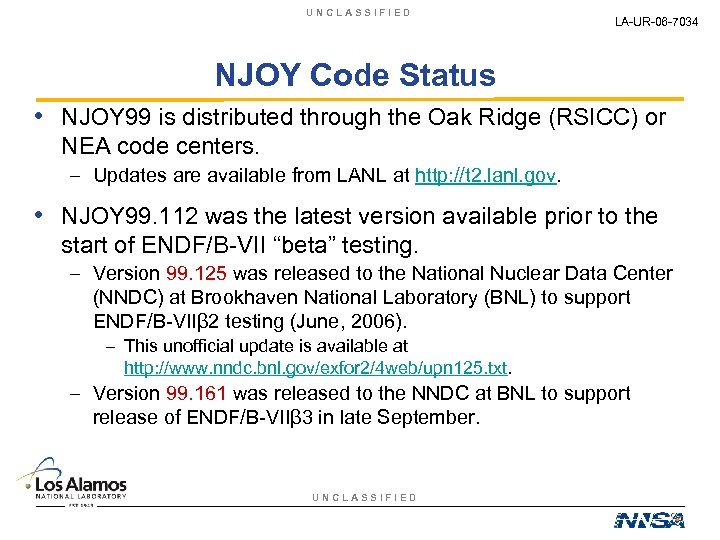 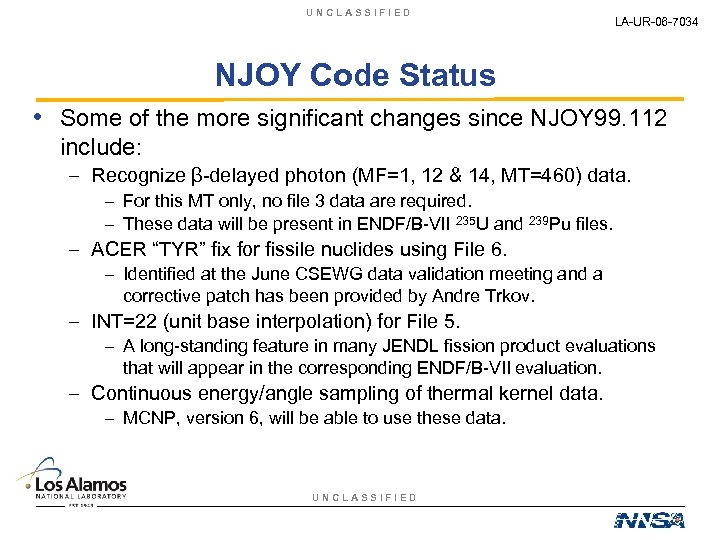 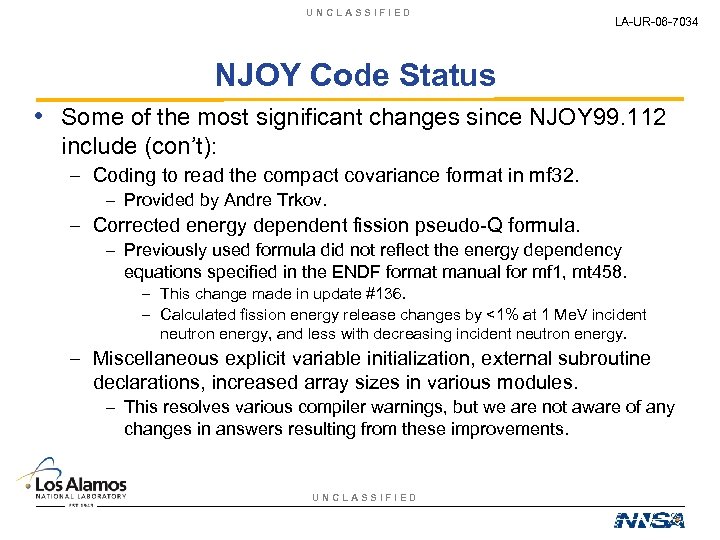 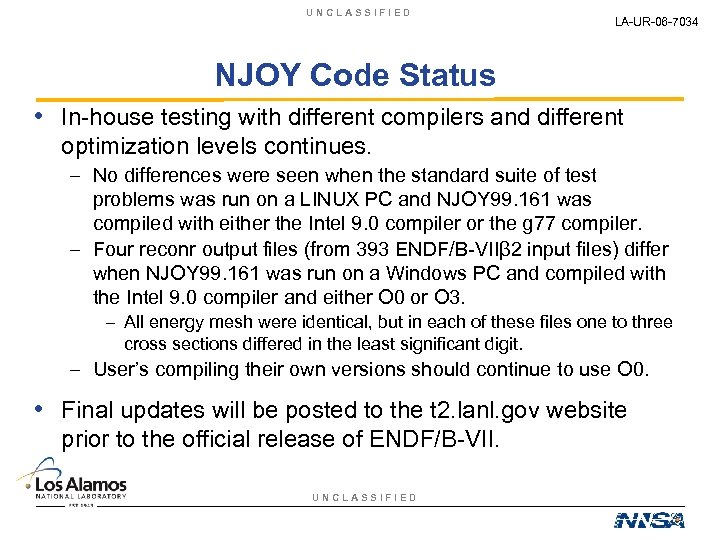 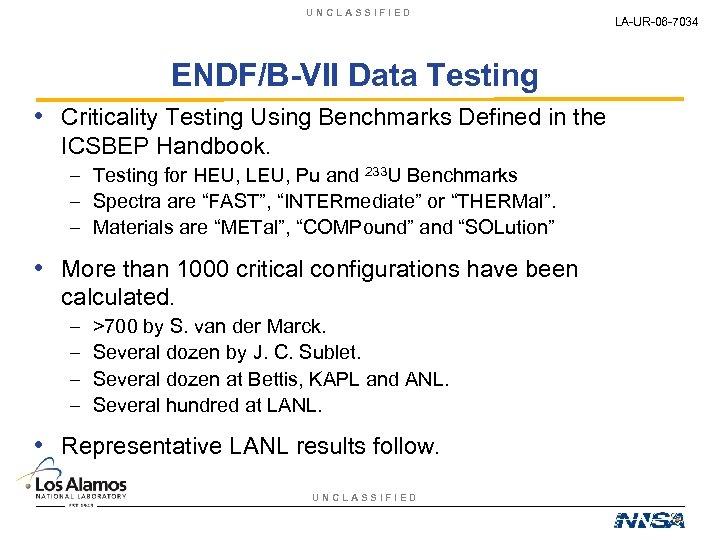 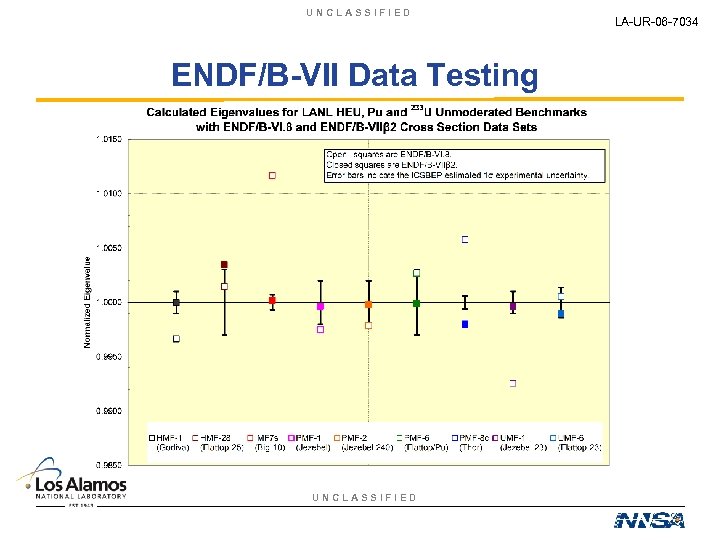 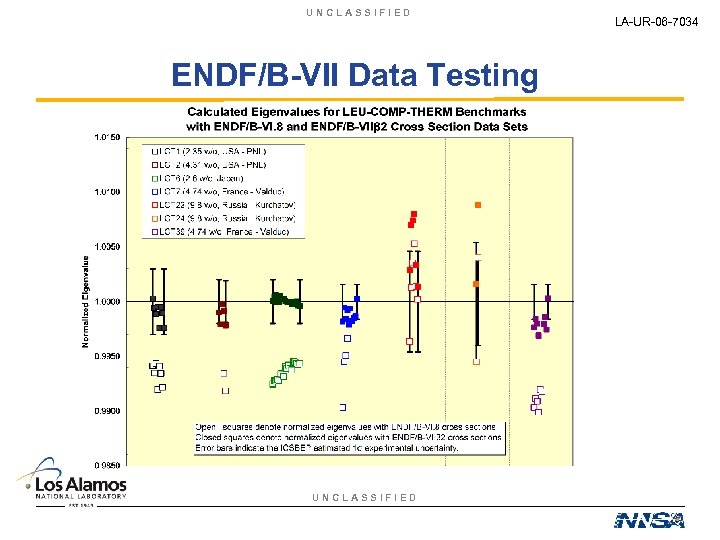 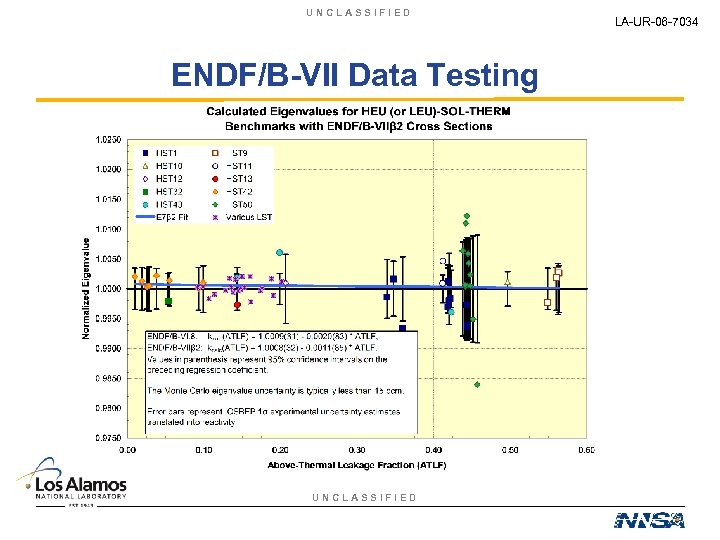 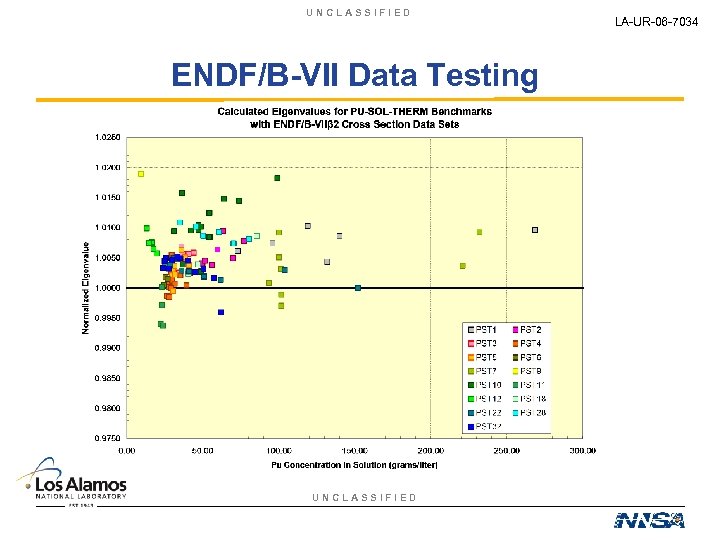 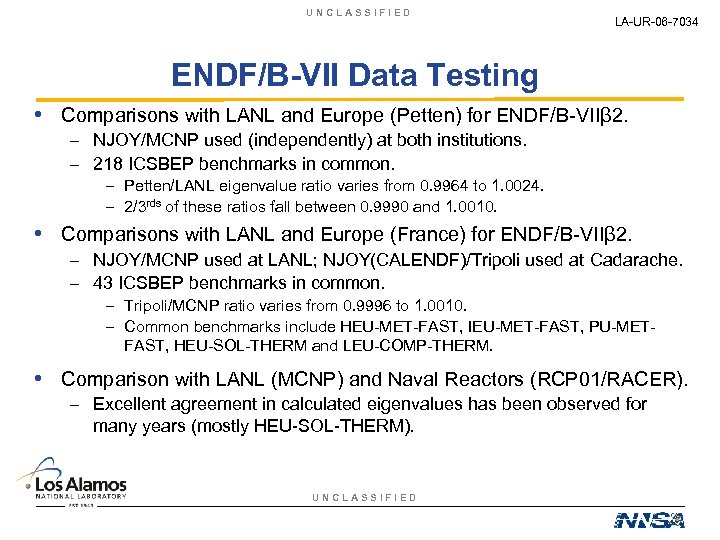 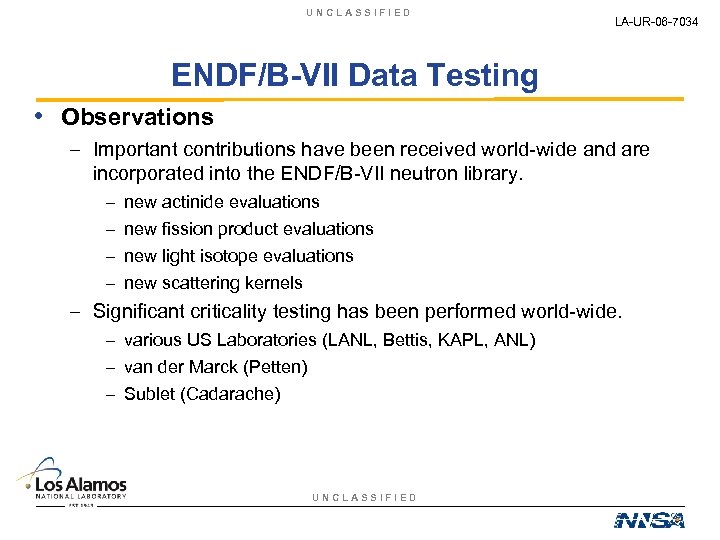 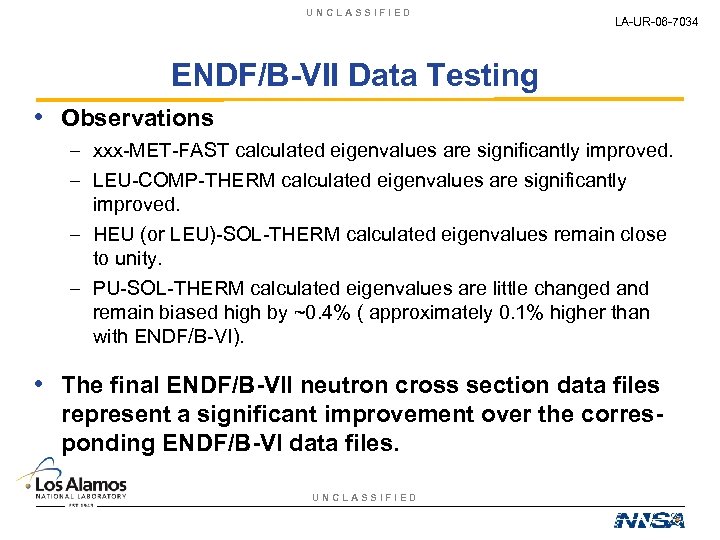 UNCLASSIFIED LA-UR-06 -7034 NJOY Code Status • Bob Mac. Farlane may be retired, but is alive & well and remains actively involved with NJOY development and data testing . • LANL is maintaining and updating NJOY 99 as needed to process ENDF/B-VII. • An f 95 version has also been developed and we expect to release this version by the end of 2006. – The absence, until this summer, of a code sharing agreement between RSICC and the NEA has delayed release of this new version. UNCLASSIFIED

UNCLASSIFIED LA-UR-06 -7034 NJOY Code Status • NJOY 99 is distributed through the Oak Ridge (RSICC) or NEA code centers. – Updates are available from LANL at http: //t 2. lanl. gov. • NJOY 99. 112 was the latest version available prior to the start of ENDF/B-VII “beta” testing. – Version 99. 125 was released to the National Nuclear Data Center (NNDC) at Brookhaven National Laboratory (BNL) to support ENDF/B-VIIβ 2 testing (June, 2006). – This unofficial update is available at http: //www. nndc. bnl. gov/exfor 2/4 web/upn 125. txt. – Version 99. 161 was released to the NNDC at BNL to support release of ENDF/B-VIIβ 3 in late September. UNCLASSIFIED

UNCLASSIFIED LA-UR-06 -7034 NJOY Code Status • Some of the more significant changes since NJOY 99. 112 include: – Recognize β-delayed photon (MF=1, 12 & 14, MT=460) data. – For this MT only, no file 3 data are required. – These data will be present in ENDF/B-VII 235 U and 239 Pu files. – ACER “TYR” fix for fissile nuclides using File 6. – Identified at the June CSEWG data validation meeting and a corrective patch has been provided by Andre Trkov. – INT=22 (unit base interpolation) for File 5. – A long-standing feature in many JENDL fission product evaluations that will appear in the corresponding ENDF/B-VII evaluation. – Continuous energy/angle sampling of thermal kernel data. – MCNP, version 6, will be able to use these data. UNCLASSIFIED

UNCLASSIFIED LA-UR-06 -7034 NJOY Code Status • Some of the most significant changes since NJOY 99. 112 include (con’t): – Coding to read the compact covariance format in mf 32. – Provided by Andre Trkov. – Corrected energy dependent fission pseudo-Q formula. – Previously used formula did not reflect the energy dependency equations specified in the ENDF format manual for mf 1, mt 458. – This change made in update #136. – Calculated fission energy release changes by <1% at 1 Me. V incident neutron energy, and less with decreasing incident neutron energy. – Miscellaneous explicit variable initialization, external subroutine declarations, increased array sizes in various modules. – This resolves various compiler warnings, but we are not aware of any changes in answers resulting from these improvements. UNCLASSIFIED

UNCLASSIFIED LA-UR-06 -7034 NJOY Code Status • In-house testing with different compilers and different optimization levels continues. – No differences were seen when the standard suite of test problems was run on a LINUX PC and NJOY 99. 161 was compiled with either the Intel 9. 0 compiler or the g 77 compiler. – Four reconr output files (from 393 ENDF/B-VIIβ 2 input files) differ when NJOY 99. 161 was run on a Windows PC and compiled with the Intel 9. 0 compiler and either O 0 or O 3. – All energy mesh were identical, but in each of these files one to three cross sections differed in the least significant digit. – User’s compiling their own versions should continue to use O 0. • Final updates will be posted to the t 2. lanl. gov website prior to the official release of ENDF/B-VII. UNCLASSIFIED

UNCLASSIFIED LA-UR-06 -7034 ENDF/B-VII Data Testing • Comparisons with LANL and Europe (Petten) for ENDF/B-VIIβ 2. – NJOY/MCNP used (independently) at both institutions. – 218 ICSBEP benchmarks in common. – Petten/LANL eigenvalue ratio varies from 0. 9964 to 1. 0024. – 2/3 rds of these ratios fall between 0. 9990 and 1. 0010. • Comparisons with LANL and Europe (France) for ENDF/B-VIIβ 2. – NJOY/MCNP used at LANL; NJOY(CALENDF)/Tripoli used at Cadarache. – 43 ICSBEP benchmarks in common. – Tripoli/MCNP ratio varies from 0. 9996 to 1. 0010. – Common benchmarks include HEU-MET-FAST, IEU-MET-FAST, PU-METFAST, HEU-SOL-THERM and LEU-COMP-THERM. • Comparison with LANL (MCNP) and Naval Reactors (RCP 01/RACER). – Excellent agreement in calculated eigenvalues has been observed for many years (mostly HEU-SOL-THERM). UNCLASSIFIED

D-R Kazarin Peter For the safe