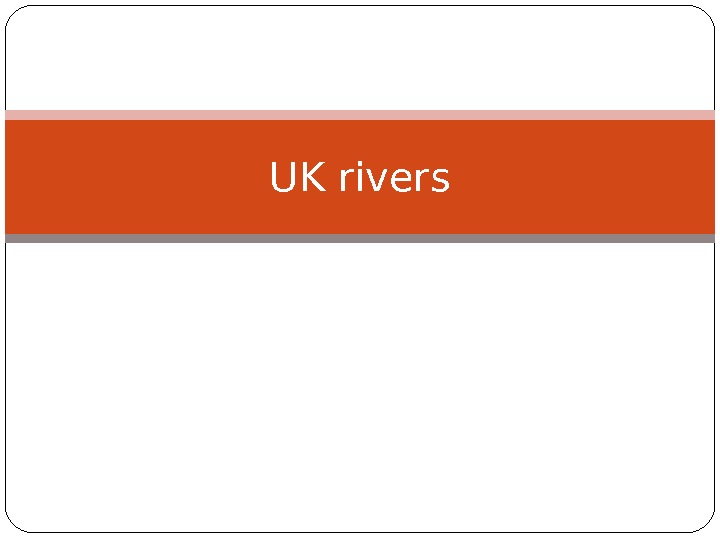 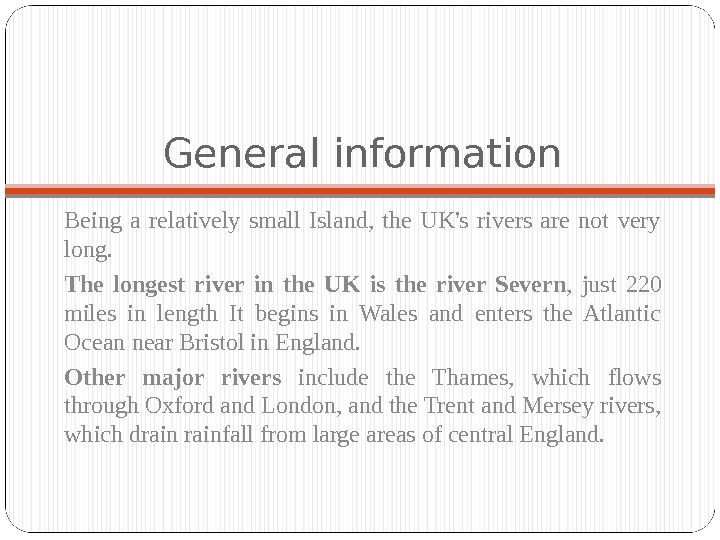 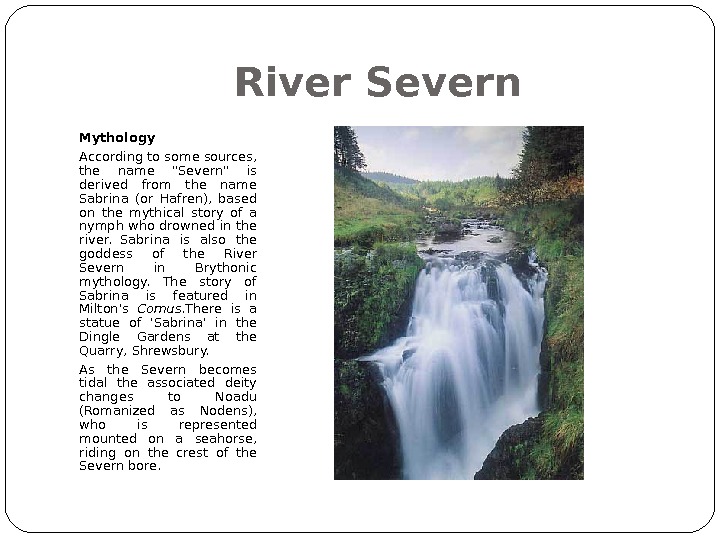 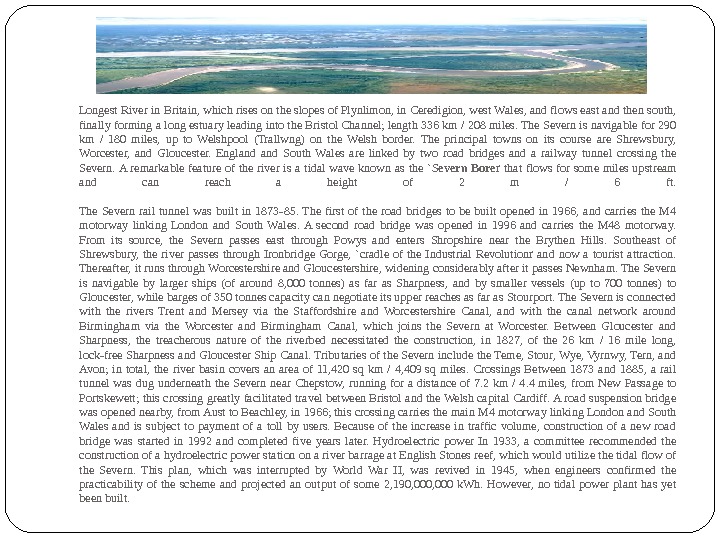 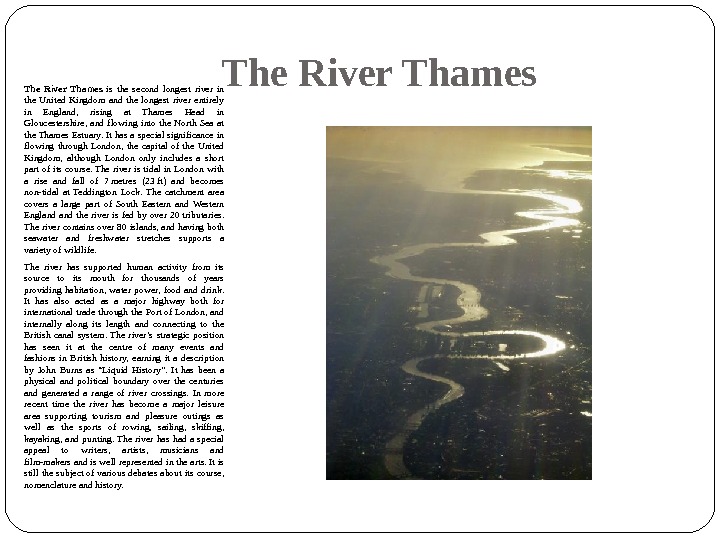 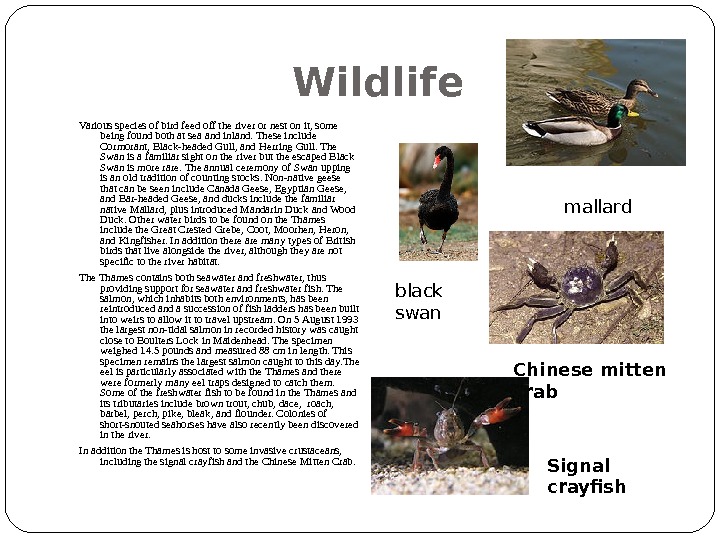 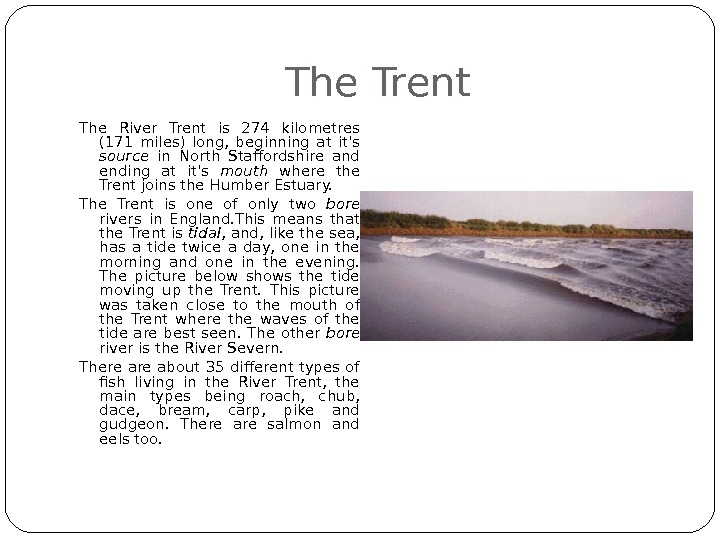 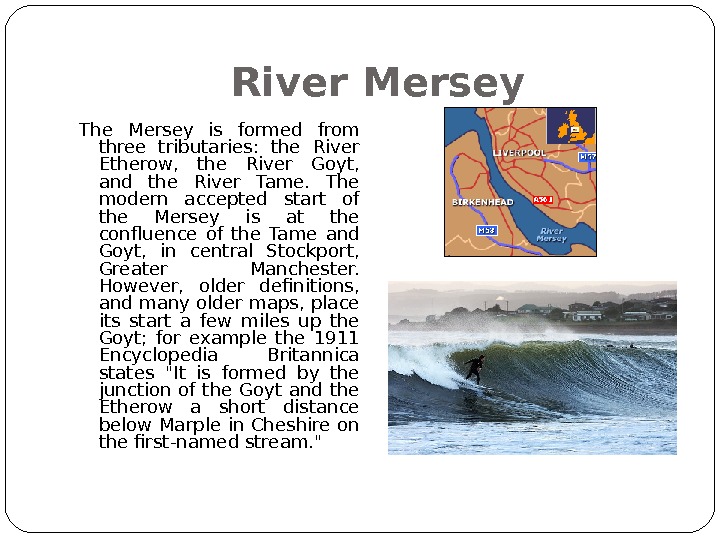 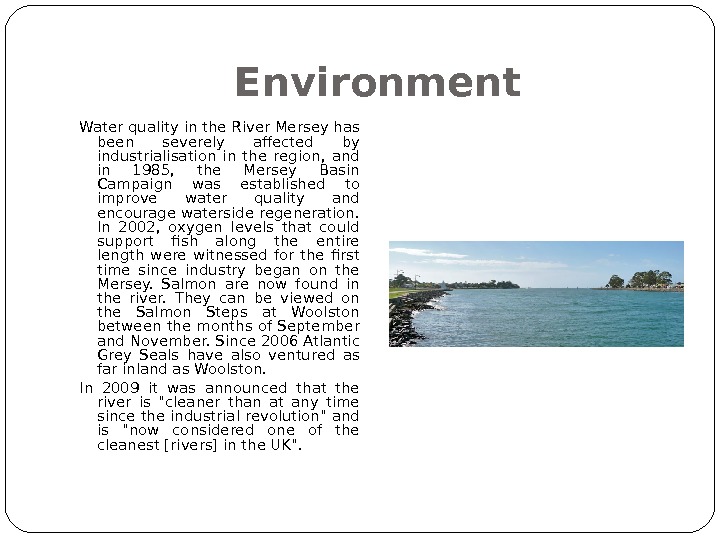 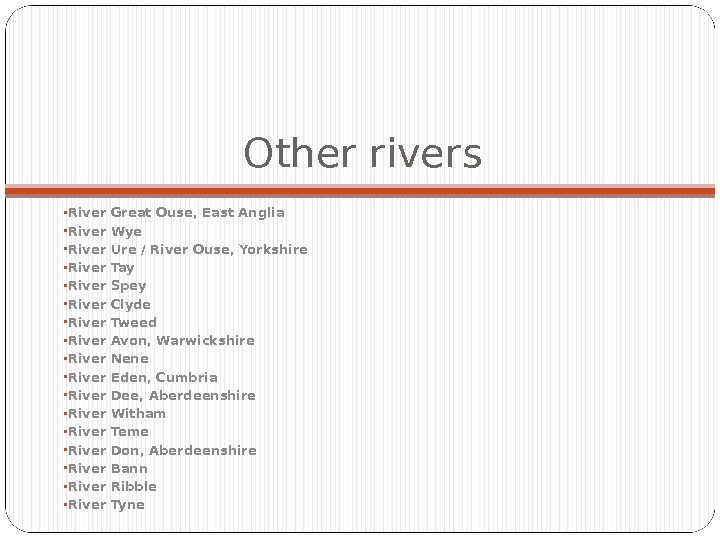 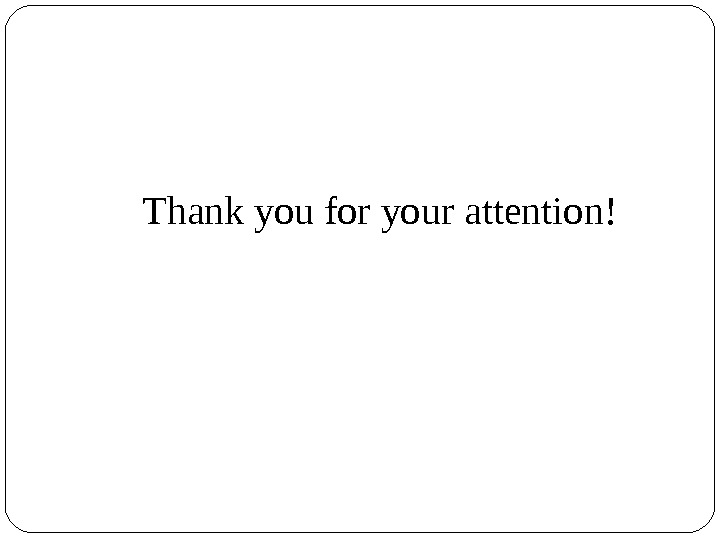 General information Being a relatively small Island, the UK’s rivers are not very long. The longest river in the UK is the river Severn , just 220 miles in length It begins in Wales and enters the Atlantic Ocean near Bristol in England. Other major rivers include the Thames, which flows through Oxford and London, and the Trent and Mersey rivers, which drainfall from large areas of central England.

River Severn Mythology According to some sources, the name «Severn» is derived from the name Sabrina (or Hafren), based on the mythical story of a nymph who drowned in the river. Sabrina is also the goddess of the River Severn in Brythonic mythology. The story of Sabrina is featured in Milton’s Comus. There is a statue of ‘Sabrina’ in the Dingle Gardens at the Quarry, Shrewsbury. As the Severn becomes tidal the associated deity changes to Noadu (Romanized as Nodens), who is represented mounted on a seahorse, riding on the crest of the Severn bore.

Longest River in Britain, which rises on the slopes of Plynlimon, in Ceredigion, west Wales, and flows east and then south, finally forming a long estuary leading into the Bristol Channel; length 336 km / 208 miles. The Severn is navigable for 290 km / 180 miles, up to Welshpool (Trallwng) on the Welsh border. The principal towns on its course are Shrewsbury, Worcester, and Gloucester. England South Wales are linked by two road bridges and a railway tunnel crossing the Severn. A remarkable feature of the river is a tidal wave known as the ` Severn Bore ґ that flows for some miles upstream and can reach a height of 2 m / 6 ft. The Severn rail tunnel was built in 1873 -85. The first of the road bridges to be built opened in 1966, and carries the M 4 motorway linking London and South Wales. A second road bridge was opened in 1996 and carries the M 48 motorway. From its source, the Severn passes east through Powys and enters Shropshire near the Brythen Hills. Southeast of Shrewsbury, the river passes through Ironbridge Gorge, `cradle of the Industrial Revolutionґ and now a tourist attraction. Thereafter, it runs through Worcestershire and Gloucestershire, widening considerably after it passes Newnham. The Severn is navigable by larger ships (of around 8, 000 tonnes) as far as Sharpness, and by smaller vessels (up to 700 tonnes) to Gloucester, while barges of 350 tonnes capacity can negotiate its upper reaches as far as Stourport. The Severn is connected with the rivers Trent and Mersey via the Staffordshire and Worcestershire Canal, and with the canal network around Birmingham via the Worcester and Birmingham Canal, which joins the Severn at Worcester. Between Gloucester and Sharpness, the treacherous nature of the riverbed necessitated the construction, in 1827, of the 26 km / 16 mile long, lock-free Sharpness and Gloucester Ship Canal. Tributaries of the Severn include the Teme, Stour, Wye, Vyrnwy, Tern, and Avon; in total, the river basin covers an area of 11, 420 sq km / 4, 409 sq miles. Crossings Between 1873 and 1885, a rail tunnel was dug underneath the Severn near Chepstow, running for a distance of 7. 2 km / 4. 4 miles, from New Passage to Portskewett; this crossing greatly facilitated travel between Bristol and the Welsh capital Cardiff. A road suspension bridge was opened nearby, from Aust to Beachley, in 1966; this crossing carries the main M 4 motorway linking London and South Wales and is subject to payment of a toll by users. Because of the increase in traffic volume, construction of a new road bridge was started in 1992 and completed five years later. Hydroelectric power In 1933, a committee recommended the construction of a hydroelectric power station on a river barrage at English Stones reef, which would utilize the tidal flow of the Severn. This plan, which was interrupted by World War II, was revived in 1945, when engineers confirmed the practicability of the scheme and projected an output of some 2, 190, 000 k. Wh. However, no tidal power plant has yet been built.

The River Thames is the second longest river in the United Kingdom and the longest river entirely in England, rising at Thames Head in Gloucestershire, and flowing into the North Sea at the Thames Estuary. It has a special significance in flowing through London, the capital of the United Kingdom, although London only includes a short part of its course. The river is tidal in London with a rise and fall of 7 metres (23 ft) and becomes non-tidal at Teddington Lock. The catchment area covers a large part of South Eastern and Western England the river is fed by over 20 tributaries. The river contains over 80 islands, and having both seawater and freshwater stretches supports a variety of wildlife. The river has supported human activity from its source to its mouth for thousands of years providing habitation, water power, food and drink. It has also acted as a major highway both for international trade through the Port of London, and internally along its length and connecting to the British canal system. The river’s strategic position has seen it at the centre of many events and fashions in British history, earning it a description by John Burns as “Liquid History”. It has been a physical and political boundary over the centuries and generated a range of river crossings. In more recent time the river has become a major leisure area supporting tourism and pleasure outings as well as the sports of rowing, sailing, skiffing, kayaking, and punting. The river has had a special appeal to writers, artists, musicians and film-makers and is well represented in the arts. It is still the subject of various debates about its course, nomenclature and history.

Wildlife Various species of bird feed off the river or nest on it, some being found both at sea and inland. These include Cormorant, Black-headed Gull, and Herring Gull. The Swan is a familiar sight on the river but the escaped Black Swan is more rare. The annual ceremony of Swan upping is an old tradition of counting stocks. Non-native geese that can be seen include Canada Geese, Egyptian Geese, and Bar-headed Geese, and ducks include the familiar native Mallard, plus introduced Mandarin Duck and Wood Duck. Other water birds to be found on the Thames include the Great Crested Grebe, Coot, Moorhen, Heron, and Kingfisher. In addition there are many types of British birds that live alongside the river, although they are not specific to the river habitat. The Thames contains both seawater and freshwater, thus providing support for seawater and freshwater fish. The salmon, which inhabits both environments, has been reintroduced and a succession of fish ladders has been built into weirs to allow it to travel upstream. On 5 August 1993 the largest non-tidal salmon in recorded history was caught close to Boulters Lock in Maidenhead. The specimen weighed 14. 5 pounds and measured 88 cm in length. This specimen remains the largest salmon caught to this day. The eel is particularly associated with the Thames and there were formerly many eel traps designed to catch them. Some of the freshwater fish to be found in the Thames and its tributaries include brown trout, chub, dace, roach, barbel, perch, pike, bleak, and flounder. Colonies of short-snouted seahorses have also recently been discovered in the river. In addition the Thames is host to some invasive crustaceans, including the signal crayfish and the Chinese Mitten Crab. black swan mallard Chinese mitten crab Signal crayfish

The Trent The River Trent is 274 kilometres (171 miles) long, beginning at it’s source in North Staffordshire and ending at it’s mouth where the Trent joins the Humber Estuary. The Trent is one of only two bore rivers in England. This means that the Trent is tidal , and, like the sea, has a tide twice a day, one in the morning and one in the evening. The picture below shows the tide moving up the Trent. This picture was taken close to the mouth of the Trent where the waves of the tide are best seen. The other bore river is the River Severn. There about 35 different types of fish living in the River Trent, the main types being roach, chub, dace, bream, carp, pike and gudgeon. There are salmon and eels too.

River Mersey The Mersey is formed from three tributaries: the River Etherow, the River Goyt, and the River Tame. The modern accepted start of the Mersey is at the confluence of the Tame and Goyt, in central Stockport, Greater Manchester. However, older definitions, and many older maps, place its start a few miles up the Goyt; for example the 1911 Encyclopedia Britannica states «It is formed by the junction of the Goyt and the Etherow a short distance below Marple in Cheshire on the first-named stream. «

Environment Water quality in the River Mersey has been severely affected by industrialisation in the region, and in 1985, the Mersey Basin Campaign was established to improve water quality and encourage waterside regeneration. In 2002, oxygen levels that could support fish along the entire length were witnessed for the first time since industry began on the Mersey. Salmon are now found in the river. They can be viewed on the Salmon Steps at Woolston between the months of September and November. Since 2006 Atlantic Grey Seals have also ventured as far inland as Woolston. In 2009 it was announced that the river is «cleaner than at any time since the industrial revolution» and is «now considered one of the cleanest [rivers] in the UK».