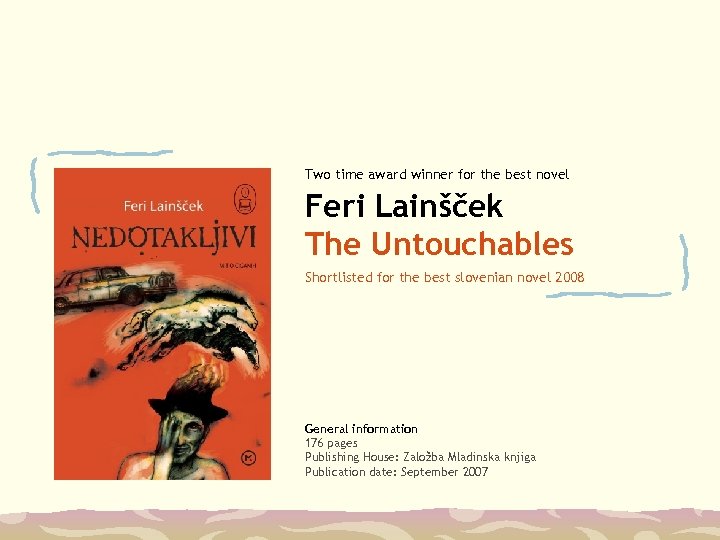 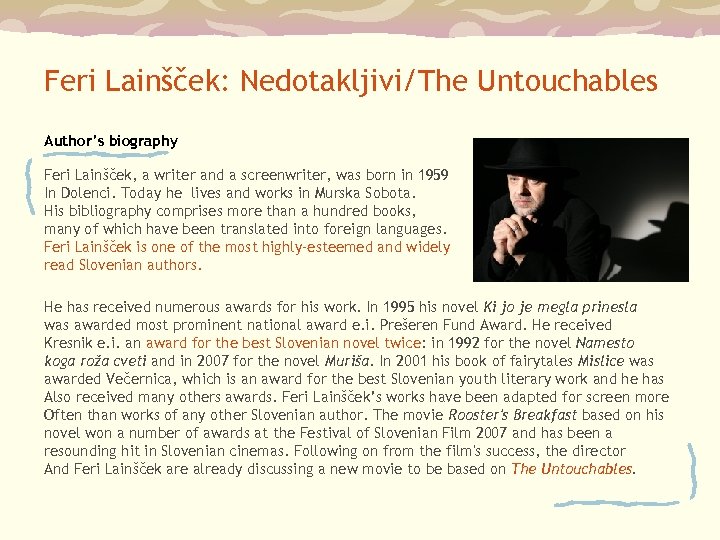 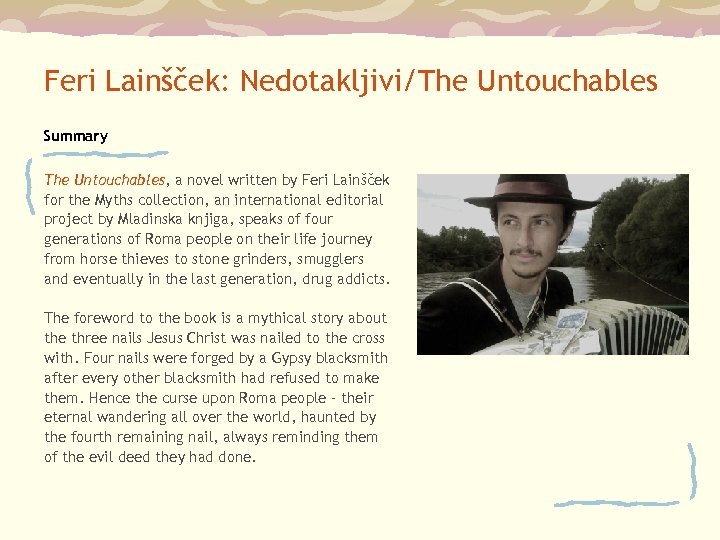 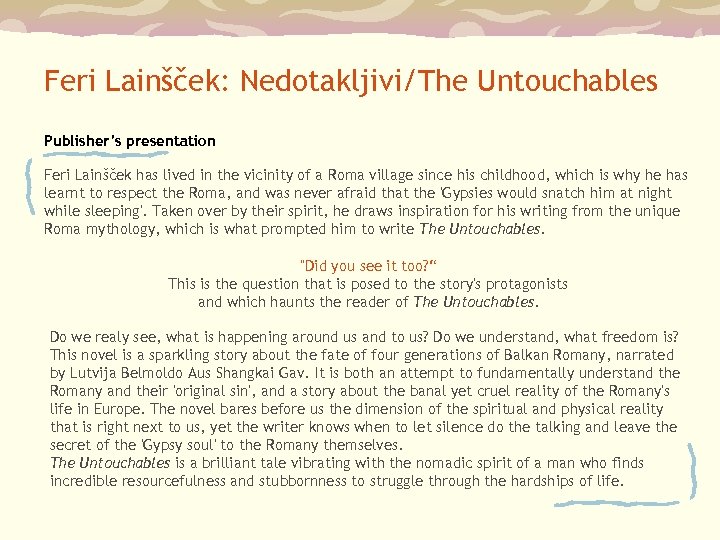 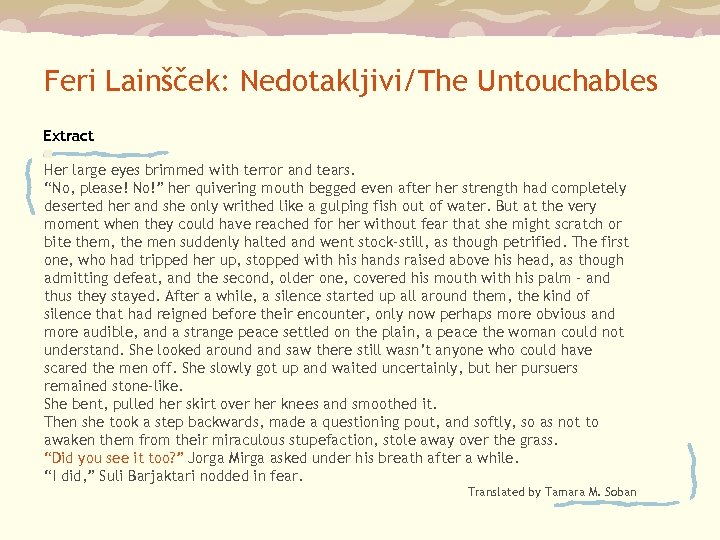 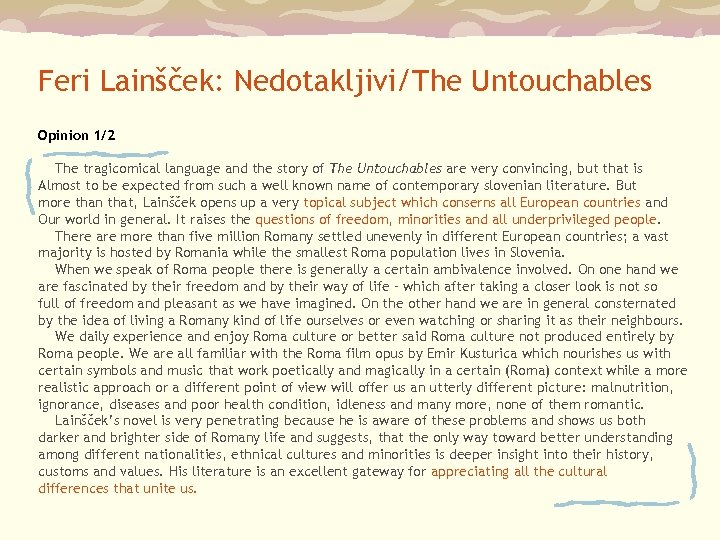 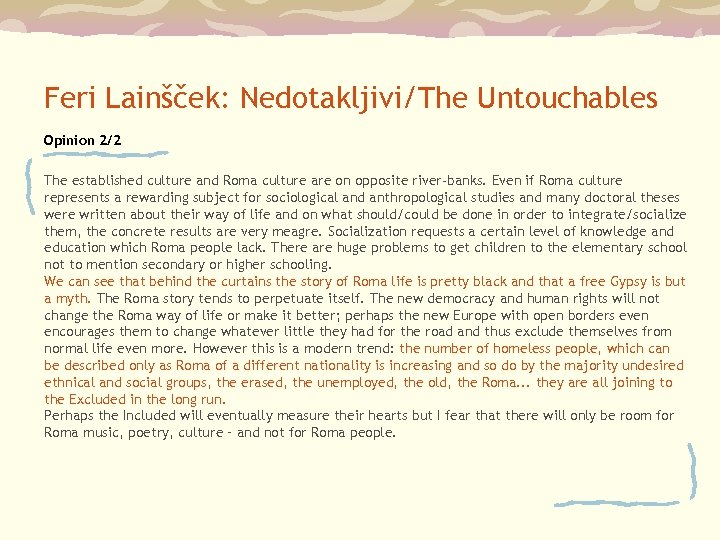 Feri Lainšček: Nedotakljivi/The Untouchables Author’s biography Feri Lainšček, a writer and a screenwriter, was born in 1959 In Dolenci. Today he lives and works in Murska Sobota. His bibliography comprises more than a hundred books, many of which have been translated into foreign languages. Feri Lainšček is one of the most highly-esteemed and widely read Slovenian authors. He has received numerous awards for his work. In 1995 his novel Ki jo je megla prinesla was awarded most prominent national award e. i. Prešeren Fund Award. He received Kresnik e. i. an award for the best Slovenian novel twice: in 1992 for the novel Namesto koga roža cveti and in 2007 for the novel Muriša. In 2001 his book of fairytales Mislice was awarded Večernica, which is an award for the best Slovenian youth literary work and he has Also received many others awards. Feri Lainšček’s works have been adapted for screen more Often than works of any other Slovenian author. The movie Rooster's Breakfast based on his novel won a number of awards at the Festival of Slovenian Film 2007 and has been a resounding hit in Slovenian cinemas. Following on from the film's success, the director And Feri Lainšček are already discussing a new movie to be based on The Untouchables.

Feri Lainšček: Nedotakljivi/The Untouchables Summary The Untouchables, a novel written by Feri Lainšček for the Myths collection, an international editorial project by Mladinska knjiga, speaks of four generations of Roma people on their life journey from horse thieves to stone grinders, smugglers and eventually in the last generation, drug addicts. The foreword to the book is a mythical story about the three nails Jesus Christ was nailed to the cross with. Four nails were forged by a Gypsy blacksmith after every other blacksmith had refused to make them. Hence the curse upon Roma people – their eternal wandering all over the world, haunted by the fourth remaining nail, always reminding them of the evil deed they had done.

Feri Lainšček: Nedotakljivi/The Untouchables Publisher’s presentation Feri Lainšček has lived in the vicinity of a Roma village since his childhood, which is why he has learnt to respect the Roma, and was never afraid that the 'Gypsies would snatch him at night while sleeping'. Taken over by their spirit, he draws inspiration for his writing from the unique Roma mythology, which is what prompted him to write The Untouchables. "Did you see it too? “ This is the question that is posed to the story's protagonists and which haunts the reader of The Untouchables. Do we realy see, what is happening around us and to us? Do we understand, what freedom is? This novel is a sparkling story about the fate of four generations of Balkan Romany, narrated by Lutvija Belmoldo Aus Shangkai Gav. It is both an attempt to fundamentally understand the Romany and their 'original sin', and a story about the banal yet cruel reality of the Romany's life in Europe. The novel bares before us the dimension of the spiritual and physical reality that is right next to us, yet the writer knows when to let silence do the talking and leave the secret of the 'Gypsy soul' to the Romany themselves. The Untouchables is a brilliant tale vibrating with the nomadic spirit of a man who finds incredible resourcefulness and stubbornness to struggle through the hardships of life.

Feri Lainšček: Nedotakljivi/The Untouchables Extract n Her large eyes brimmed with terror and tears. “No, please! No!” her quivering mouth begged even after her strength had completely deserted her and she only writhed like a gulping fish out of water. But at the very moment when they could have reached for her without fear that she might scratch or bite them, the men suddenly halted and went stock-still, as though petrified. The first one, who had tripped her up, stopped with his hands raised above his head, as though admitting defeat, and the second, older one, covered his mouth with his palm – and thus they stayed. After a while, a silence started up all around them, the kind of silence that had reigned before their encounter, only now perhaps more obvious and more audible, and a strange peace settled on the plain, a peace the woman could not understand. She looked around and saw there still wasn’t anyone who could have scared the men off. She slowly got up and waited uncertainly, but her pursuers remained stone-like. She bent, pulled her skirt over her knees and smoothed it. Then she took a step backwards, made a questioning pout, and softly, so as not to awaken them from their miraculous stupefaction, stole away over the grass. “Did you see it too? ” Jorga Mirga asked under his breath after a while. “I did, ” Suli Barjaktari nodded in fear. Translated by Tamara M. Soban

Feri Lainšček: Nedotakljivi/The Untouchables Opinion 1/2 The tragicomical language and the story of The Untouchables are very convincing, but that is Almost to be expected from such a well known name of contemporary slovenian literature. But more than that, Lainšček opens up a very topical subject which conserns all European countries and Our world in general. It raises the questions of freedom, minorities and all underprivileged people. There are more than five million Romany settled unevenly in different European countries; a vast majority is hosted by Romania while the smallest Roma population lives in Slovenia. When we speak of Roma people there is generally a certain ambivalence involved. On one hand we are fascinated by their freedom and by their way of life – which after taking a closer look is not so full of freedom and pleasant as we have imagined. On the other hand we are in general consternated by the idea of living a Romany kind of life ourselves or even watching or sharing it as their neighbours. We daily experience and enjoy Roma culture or better said Roma culture not produced entirely by Roma people. We are all familiar with the Roma film opus by Emir Kusturica which nourishes us with certain symbols and music that work poetically and magically in a certain (Roma) context while a more realistic approach or a different point of view will offer us an utterly different picture: malnutrition, ignorance, diseases and poor health condition, idleness and many more, none of them romantic. Lainšček’s novel is very penetrating because he is aware of these problems and shows us both darker and brighter side of Romany life and suggests, that the only way toward better understanding among different nationalities, ethnical cultures and minorities is deeper insight into their history, customs and values. His literature is an excellent gateway for appreciating all the cultural differences that unite us.

Feri Lainšček: Nedotakljivi/The Untouchables Opinion 2/2 The established culture and Roma culture are on opposite river-banks. Even if Roma culture represents a rewarding subject for sociological and anthropological studies and many doctoral theses were written about their way of life and on what should/could be done in order to integrate/socialize them, the concrete results are very meagre. Socialization requests a certain level of knowledge and education which Roma people lack. There are huge problems to get children to the elementary school not to mention secondary or higher schooling. We can see that behind the curtains the story of Roma life is pretty black and that a free Gypsy is but a myth. The Roma story tends to perpetuate itself. The new democracy and human rights will not change the Roma way of life or make it better; perhaps the new Europe with open borders even encourages them to change whatever little they had for the road and thus exclude themselves from normal life even more. However this is a modern trend: the number of homeless people, which can be described only as Roma of a different nationality is increasing and so do by the majority undesired ethnical and social groups, the erased, the unemployed, the old, the Roma. . . they are all joining to the Excluded in the long run. Perhaps the Included will eventually measure their hearts but I fear that there will only be room for Roma music, poetry, culture – and not for Roma people.