Travel is the movement of people between relatively 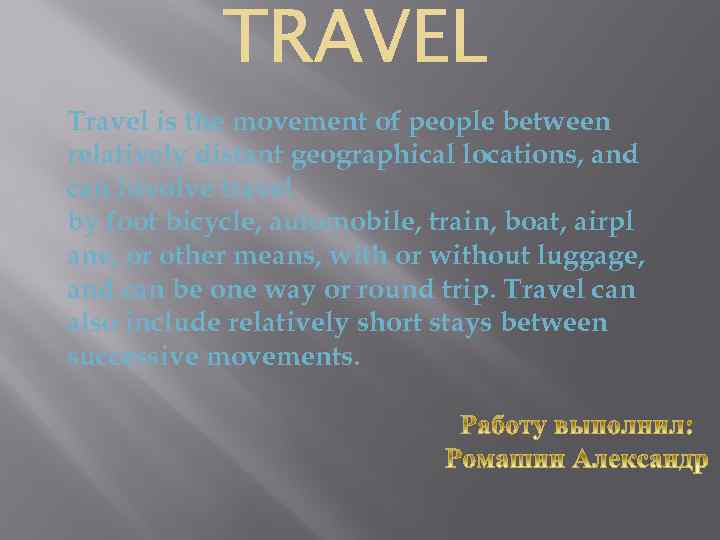 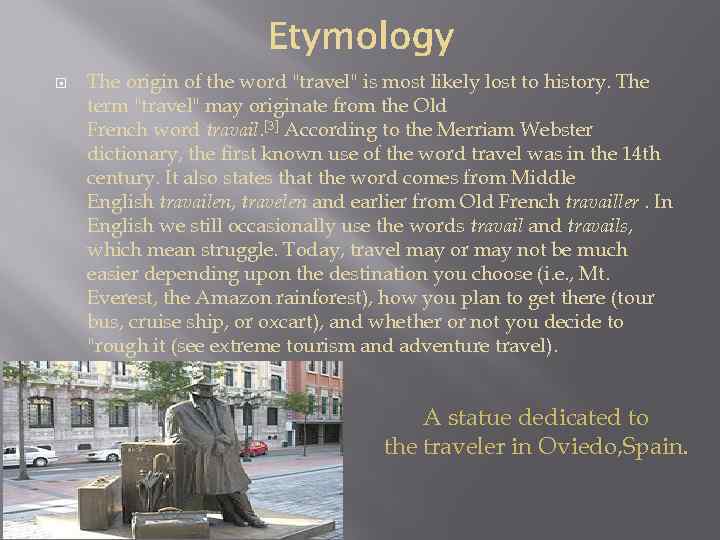 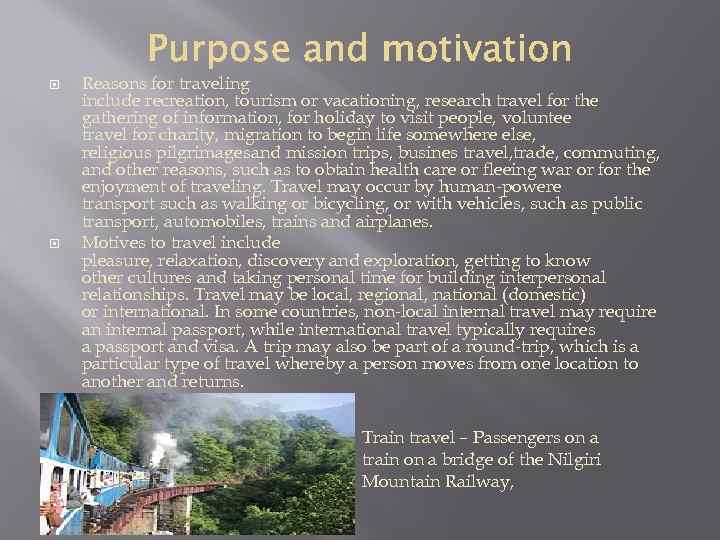 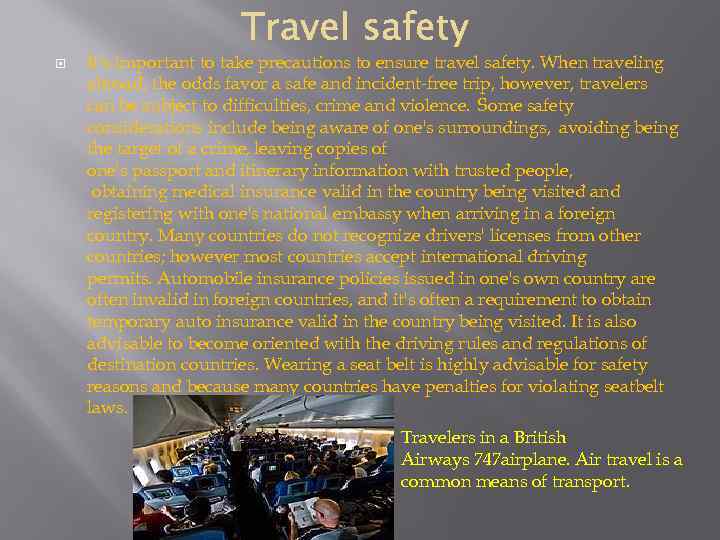 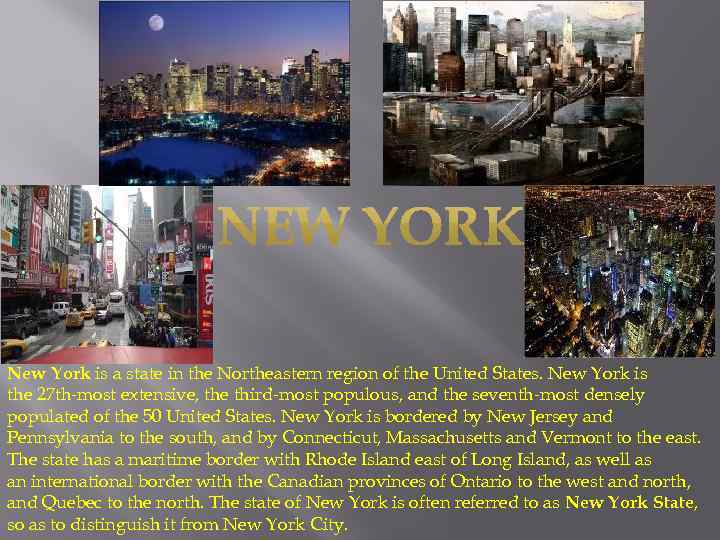 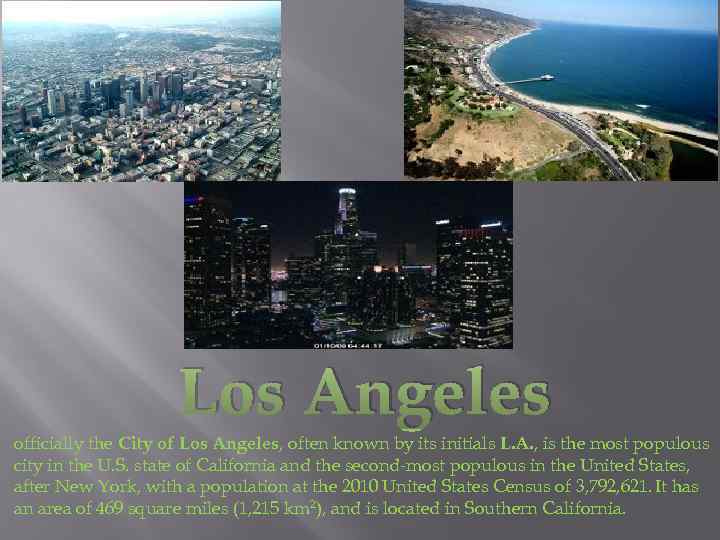 Скачать презентацию Travel is the movement of people between relatively

Travel is the movement of people between relatively distant geographical locations, and can involve travel by foot bicycle, automobile, train, boat, airpl ane, or other means, with or without luggage, and can be one way or round trip. Travel can also include relatively short stays between successive movements.

The origin of the word "travel" is most likely lost to history. The term "travel" may originate from the Old French word travail. [3] According to the Merriam Webster dictionary, the first known use of the word travel was in the 14 th century. It also states that the word comes from Middle English travailen, travelen and earlier from Old French travailler. In English we still occasionally use the words travail and travails, which mean struggle. Today, travel may or may not be much easier depending upon the destination you choose (i. e. , Mt. Everest, the Amazon rainforest), how you plan to get there (tour bus, cruise ship, or oxcart), and whether or not you decide to "rough it (see extreme tourism and adventure travel). A statue dedicated to the traveler in Oviedo, Spain.

Reasons for traveling include recreation, tourism or vacationing, research travel for the gathering of information, for holiday to visit people, voluntee travel for charity, migration to begin life somewhere else, religious pilgrimagesand mission trips, busines travel, trade, commuting, and other reasons, such as to obtain health care or fleeing war or for the enjoyment of traveling. Travel may occur by human-powere transport such as walking or bicycling, or with vehicles, such as public transport, automobiles, trains and airplanes. Motives to travel include pleasure, relaxation, discovery and exploration, getting to know other cultures and taking personal time for building interpersonal relationships. Travel may be local, regional, national (domestic) or international. In some countries, non-local internal travel may require an internal passport, while international travel typically requires a passport and visa. A trip may also be part of a round-trip, which is a particular type of travel whereby a person moves from one location to another and returns. Train travel – Passengers on a train on a bridge of the Nilgiri Mountain Railway,

It's important to take precautions to ensure travel safety. When traveling abroad, the odds favor a safe and incident-free trip, however, travelers can be subject to difficulties, crime and violence. Some safety considerations include being aware of one's surroundings, avoiding being the target of a crime, leaving copies of one's passport and itinerary information with trusted people, obtaining medical insurance valid in the country being visited and registering with one's national embassy when arriving in a foreign country. Many countries do not recognize drivers' licenses from other countries; however most countries accept international driving permits. Automobile insurance policies issued in one's own country are often invalid in foreign countries, and it's often a requirement to obtain temporary auto insurance valid in the country being visited. It is also advisable to become oriented with the driving rules and regulations of destination countries. Wearing a seat belt is highly advisable for safety reasons and because many countries have penalties for violating seatbelt laws. Travelers in a British Airways 747 airplane. Air travel is a common means of transport.

New York is a state in the Northeastern region of the United States. New York is the 27 th-most extensive, the third-most populous, and the seventh-most densely populated of the 50 United States. New York is bordered by New Jersey and Pennsylvania to the south, and by Connecticut, Massachusetts and Vermont to the east. The state has a maritime border with Rhode Island east of Long Island, as well as an international border with the Canadian provinces of Ontario to the west and north, and Quebec to the north. The state of New York is often referred to as New York State, so as to distinguish it from New York City.

Los Angeles officially the City of Los Angeles, often known by its initials L. A. , is the most populous city in the U. S. state of California and the second-most populous in the United States, after New York, with a population at the 2010 United States Census of 3, 792, 621. It has an area of 469 square miles (1, 215 km 2), and is located in Southern California.