Traditions in Poland Short presentation about the most 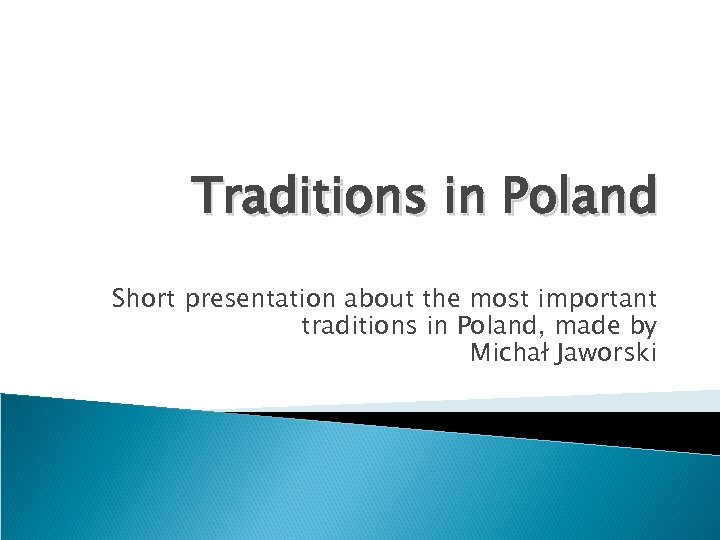 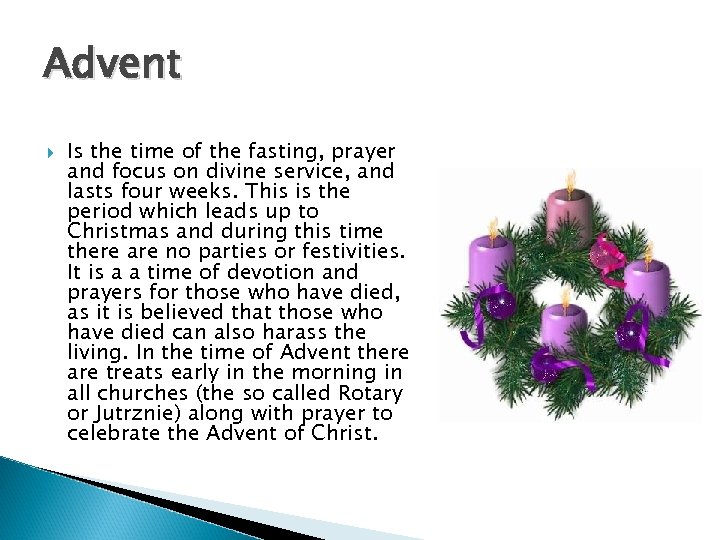 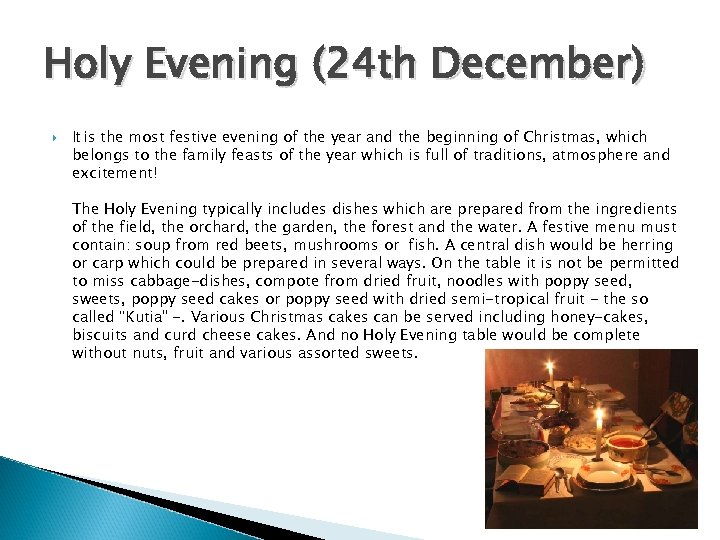 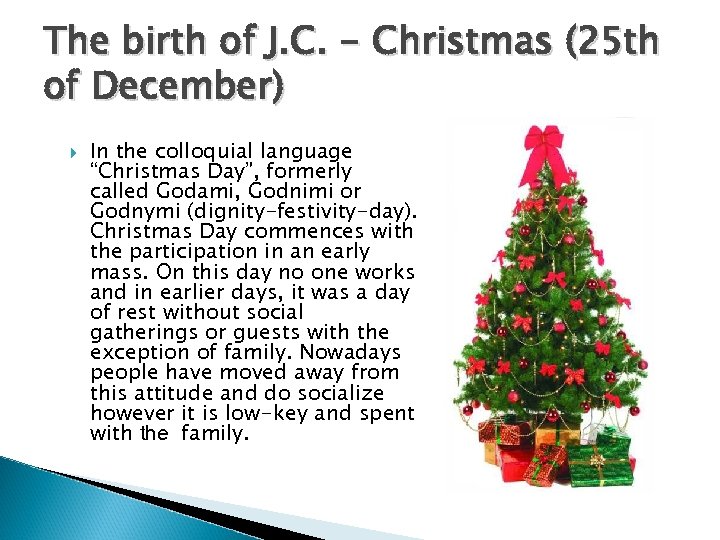 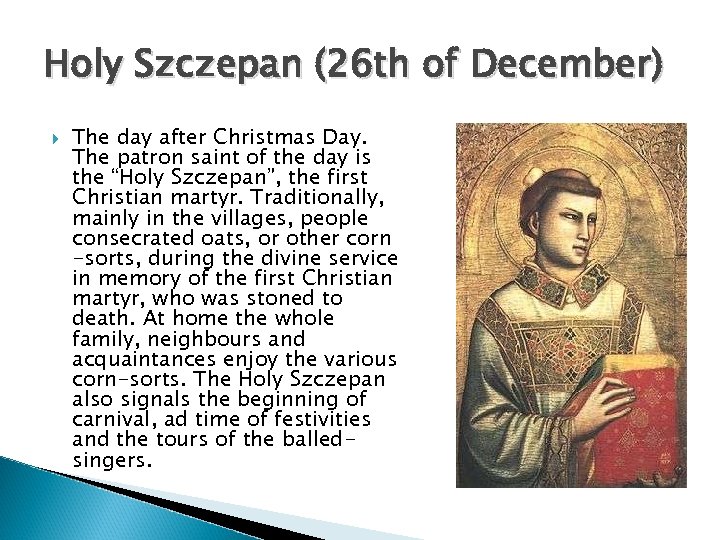 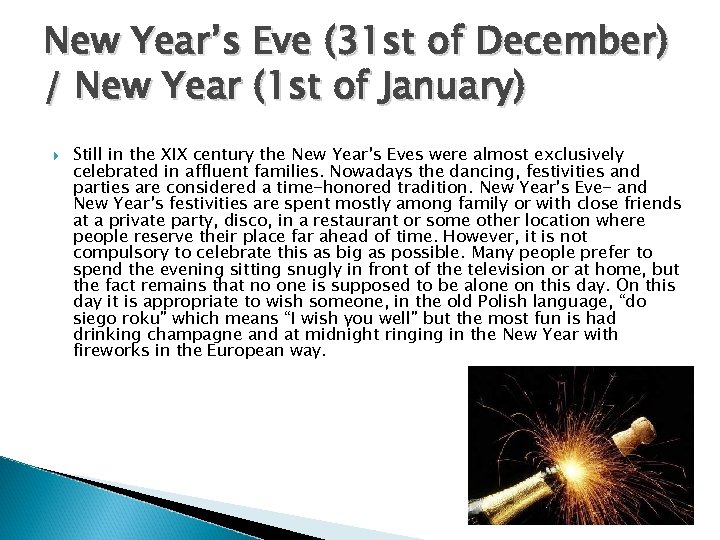 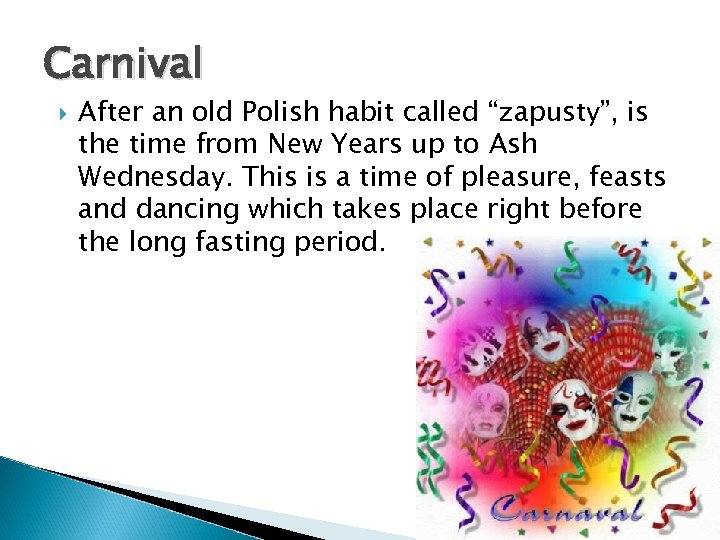 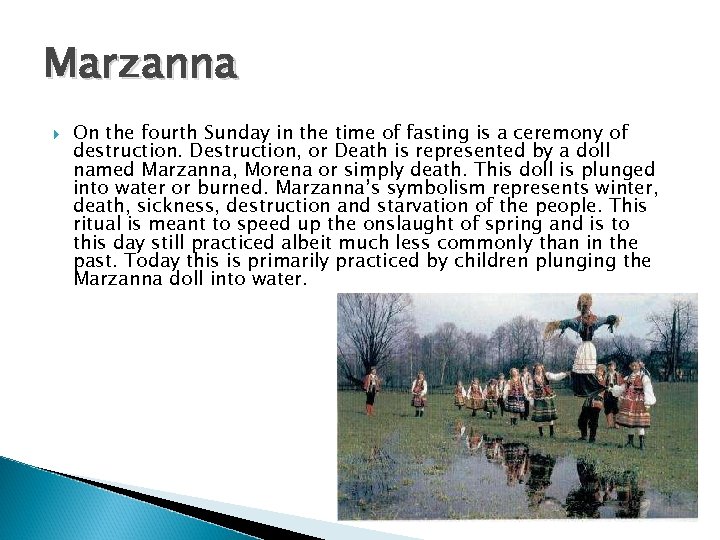 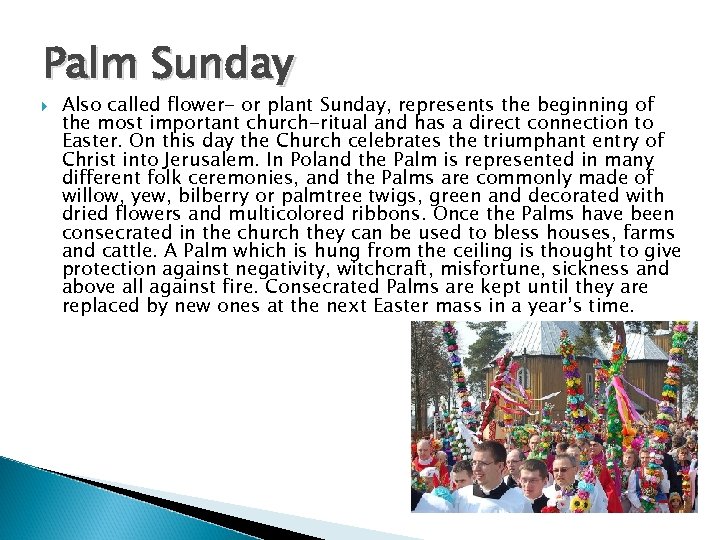 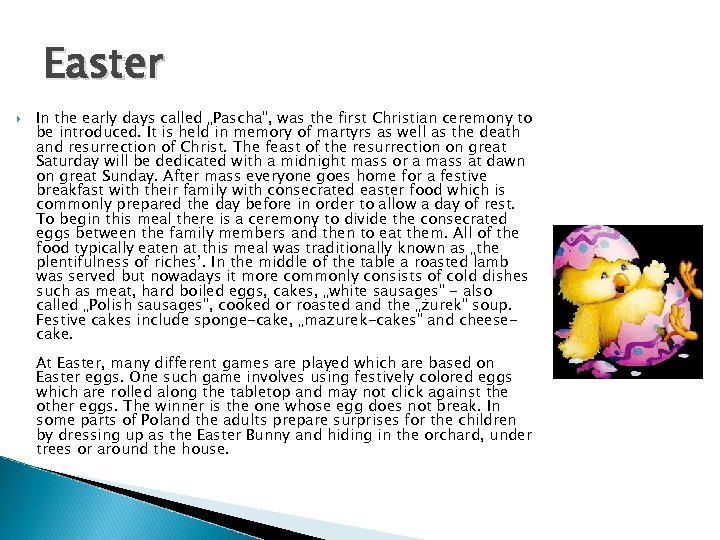 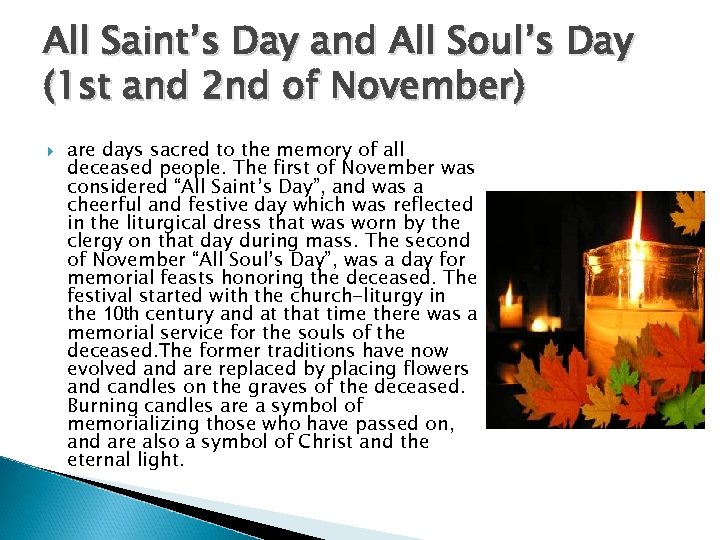 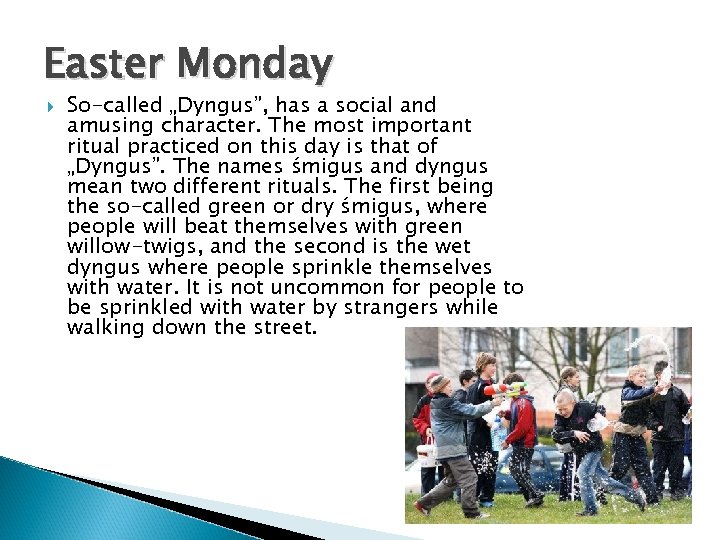 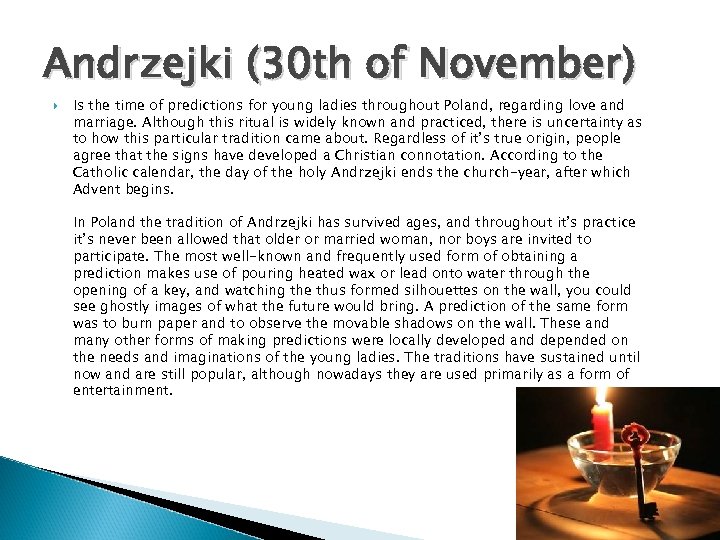 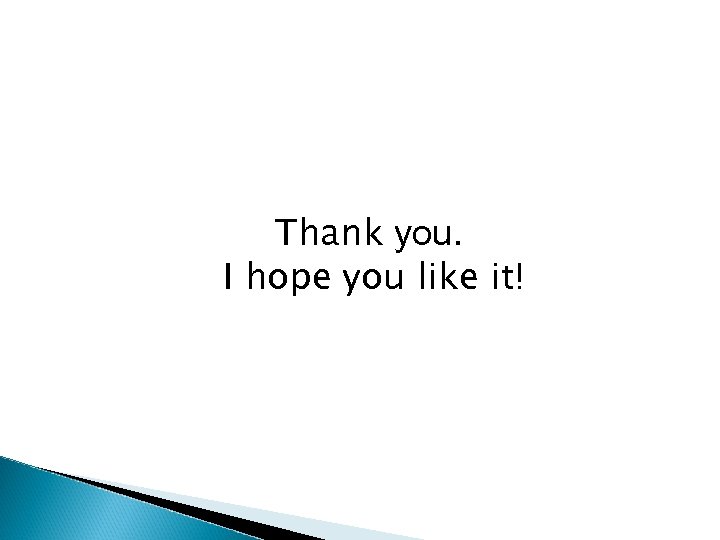 Скачать презентацию Traditions in Poland Short presentation about the most

Advent Is the time of the fasting, prayer and focus on divine service, and lasts four weeks. This is the period which leads up to Christmas and during this time there are no parties or festivities. It is a a time of devotion and prayers for those who have died, as it is believed that those who have died can also harass the living. In the time of Advent there are treats early in the morning in all churches (the so called Rotary or Jutrznie) along with prayer to celebrate the Advent of Christ.

Holy Evening (24 th December) It is the most festive evening of the year and the beginning of Christmas, which belongs to the family feasts of the year which is full of traditions, atmosphere and excitement! The Holy Evening typically includes dishes which are prepared from the ingredients of the field, the orchard, the garden, the forest and the water. A festive menu must contain: soup from red beets, mushrooms or fish. A central dish would be herring or carp which could be prepared in several ways. On the table it is not be permitted to miss cabbage-dishes, compote from dried fruit, noodles with poppy seed, sweets, poppy seed cakes or poppy seed with dried semi-tropical fruit - the so called “Kutia” -. Various Christmas cakes can be served including honey-cakes, biscuits and curd cheese cakes. And no Holy Evening table would be complete without nuts, fruit and various assorted sweets.

The birth of J. C. - Christmas (25 th of December) In the colloquial language “Christmas Day”, formerly called Godami, Godnimi or Godnymi (dignity-festivity-day). Christmas Day commences with the participation in an early mass. On this day no one works and in earlier days, it was a day of rest without social gatherings or guests with the exception of family. Nowadays people have moved away from this attitude and do socialize however it is low-key and spent with the family.

Holy Szczepan (26 th of December) The day after Christmas Day. The patron saint of the day is the “Holy Szczepan”, the first Christian martyr. Traditionally, mainly in the villages, people consecrated oats, or other corn -sorts, during the divine service in memory of the first Christian martyr, who was stoned to death. At home the whole family, neighbours and acquaintances enjoy the various corn-sorts. The Holy Szczepan also signals the beginning of carnival, ad time of festivities and the tours of the balledsingers.

New Year’s Eve (31 st of December) / New Year (1 st of January) Still in the XIX century the New Year’s Eves were almost exclusively celebrated in affluent families. Nowadays the dancing, festivities and parties are considered a time-honored tradition. New Year’s Eve- and New Year’s festivities are spent mostly among family or with close friends at a private party, disco, in a restaurant or some other location where people reserve their place far ahead of time. However, it is not compulsory to celebrate this as big as possible. Many people prefer to spend the evening sitting snugly in front of the television or at home, but the fact remains that no one is supposed to be alone on this day. On this day it is appropriate to wish someone, in the old Polish language, “do siego roku” which means “I wish you well” but the most fun is had drinking champagne and at midnight ringing in the New Year with fireworks in the European way.

Carnival After an old Polish habit called “zapusty”, is the time from New Years up to Ash Wednesday. This is a time of pleasure, feasts and dancing which takes place right before the long fasting period.

Marzanna On the fourth Sunday in the time of fasting is a ceremony of destruction. Destruction, or Death is represented by a doll named Marzanna, Morena or simply death. This doll is plunged into water or burned. Marzanna’s symbolism represents winter, death, sickness, destruction and starvation of the people. This ritual is meant to speed up the onslaught of spring and is to this day still practiced albeit much less commonly than in the past. Today this is primarily practiced by children plunging the Marzanna doll into water.

Palm Sunday Also called flower- or plant Sunday, represents the beginning of the most important church-ritual and has a direct connection to Easter. On this day the Church celebrates the triumphant entry of Christ into Jerusalem. In Poland the Palm is represented in many different folk ceremonies, and the Palms are commonly made of willow, yew, bilberry or palmtree twigs, green and decorated with dried flowers and multicolored ribbons. Once the Palms have been consecrated in the church they can be used to bless houses, farms and cattle. A Palm which is hung from the ceiling is thought to give protection against negativity, witchcraft, misfortune, sickness and above all against fire. Consecrated Palms are kept until they are replaced by new ones at the next Easter mass in a year’s time.

The Great Week Is the last week during the time of fasting and precedes “Christ’s resurrection” (the most important Christian festivity) and is a time of reflection, fasting and prayer. On Great Wednesday all candles in the church are extinguished and the priest strikes the pulpit which represents a time of chaos when Christ was persecuted. Great Saturday is the day representing consecrated food in addition to water and fire. On this day when attending church people bring with them a basket filled with eggs “symbol of life, fertility, love and power”. Some people also bring dishes filled with bread, salt, pepper, sausages and beets but this varies depending on the indigenous heritage of the women.

Easter In the early days called „Pascha”, was the first Christian ceremony to be introduced. It is held in memory of martyrs as well as the death and resurrection of Christ. The feast of the resurrection on great Saturday will be dedicated with a midnight mass or a mass at dawn on great Sunday. After mass everyone goes home for a festive breakfast with their family with consecrated easter food which is commonly prepared the day before in order to allow a day of rest. To begin this meal there is a ceremony to divide the consecrated eggs between the family members and then to eat them. All of the food typically eaten at this meal was traditionally known as „the plentifulness of riches’. In the middle of the table a roasted lamb was served but nowadays it more commonly consists of cold dishes such as meat, hard boiled eggs, cakes, „white sausages” - also called „Polish sausages”, cooked or roasted and the „żurek” soup. Festive cakes include sponge-cake, „mazurek-cakes” and cheesecake. At Easter, many different games are played which are based on Easter eggs. One such game involves using festively colored eggs which are rolled along the tabletop and may not click against the other eggs. The winner is the one whose egg does not break. In some parts of Poland the adults prepare surprises for the children by dressing up as the Easter Bunny and hiding in the orchard, under trees or around the house.

All Saint’s Day and All Soul’s Day (1 st and 2 nd of November) are days sacred to the memory of all deceased people. The first of November was considered “All Saint’s Day”, and was a cheerful and festive day which was reflected in the liturgical dress that was worn by the clergy on that day during mass. The second of November “All Soul’s Day”, was a day for memorial feasts honoring the deceased. The festival started with the church-liturgy in the 10 th century and at that time there was a memorial service for the souls of the deceased. The former traditions have now evolved and are replaced by placing flowers and candles on the graves of the deceased. Burning candles are a symbol of memorializing those who have passed on, and are also a symbol of Christ and the eternal light.

Easter Monday So-called „Dyngus”, has a social and amusing character. The most important ritual practiced on this day is that of „Dyngus”. The names śmigus and dyngus mean two different rituals. The first being the so-called green or dry śmigus, where people will beat themselves with green willow-twigs, and the second is the wet dyngus where people sprinkle themselves with water. It is not uncommon for people to be sprinkled with water by strangers while walking down the street.

Andrzejki (30 th of November) Is the time of predictions for young ladies throughout Poland, regarding love and marriage. Although this ritual is widely known and practiced, there is uncertainty as to how this particular tradition came about. Regardless of it’s true origin, people agree that the signs have developed a Christian connotation. According to the Catholic calendar, the day of the holy Andrzejki ends the church-year, after which Advent begins. In Poland the tradition of Andrzejki has survived ages, and throughout it’s practice it’s never been allowed that older or married woman, nor boys are invited to participate. The most well-known and frequently used form of obtaining a prediction makes use of pouring heated wax or lead onto water through the opening of a key, and watching the thus formed silhouettes on the wall, you could see ghostly images of what the future would bring. A prediction of the same form was to burn paper and to observe the movable shadows on the wall. These and many other forms of making predictions were locally developed and depended on the needs and imaginations of the young ladies. The traditions have sustained until now and are still popular, although nowadays they are used primarily as a form of entertainment.