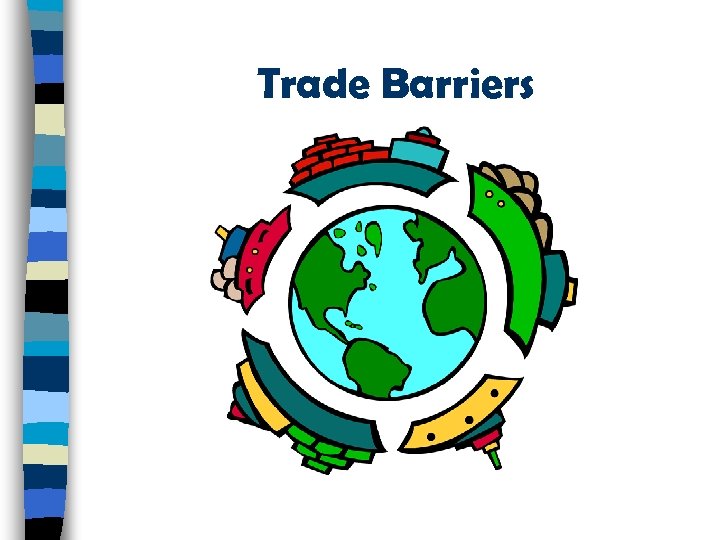 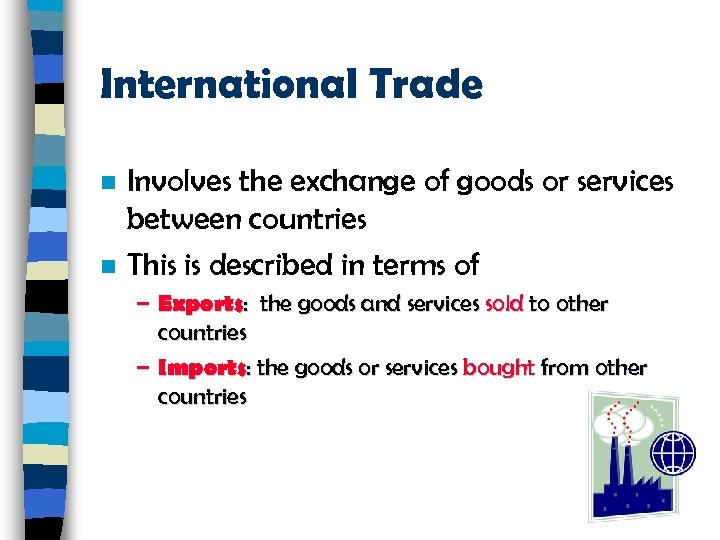 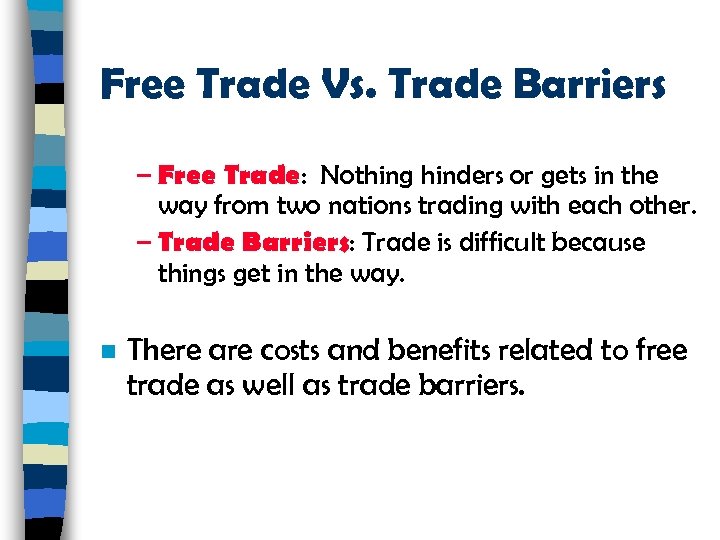 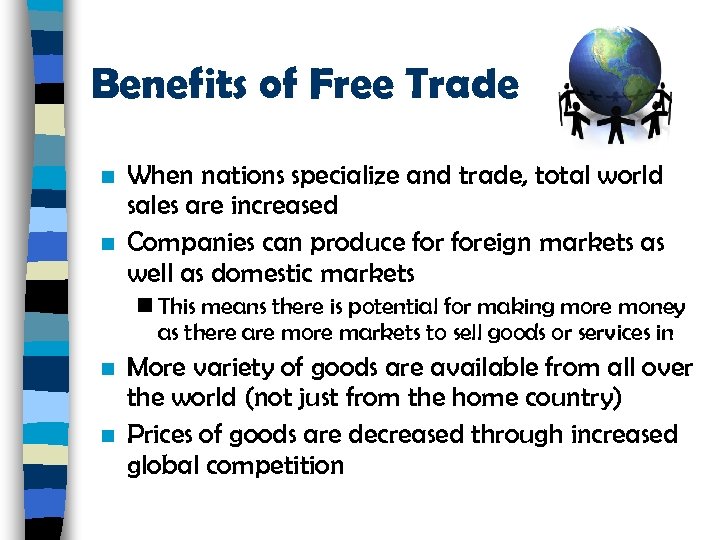 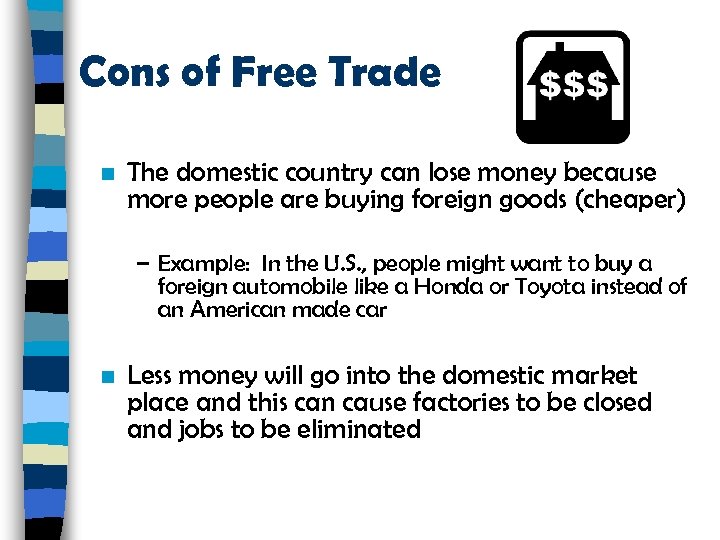 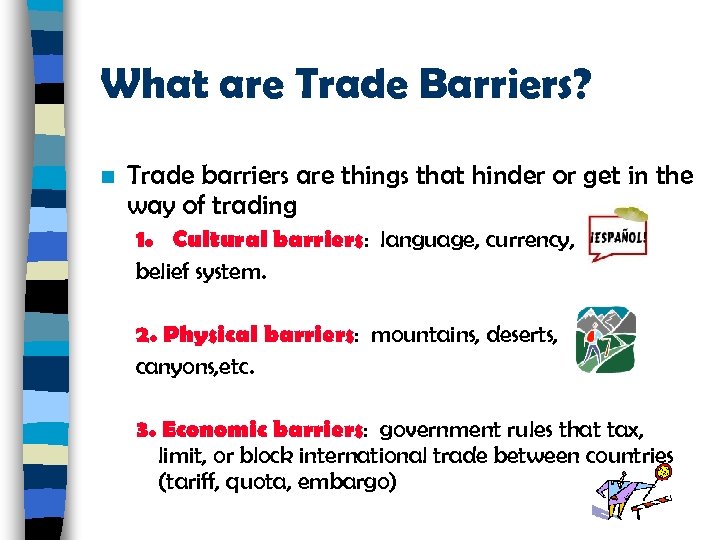 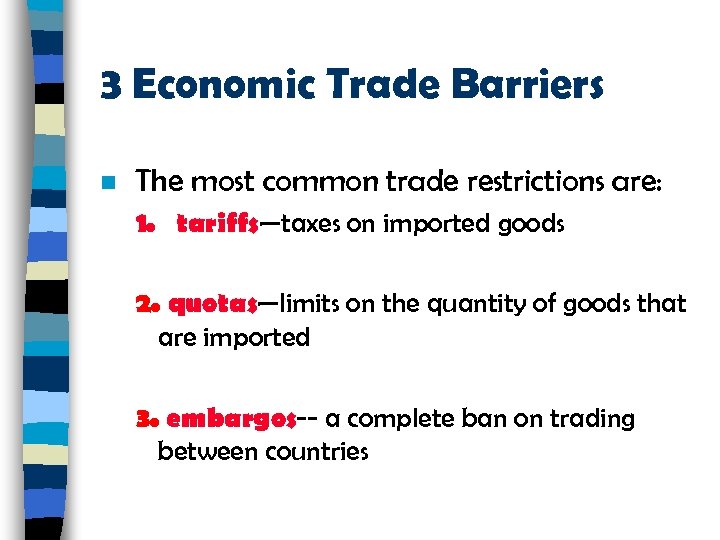 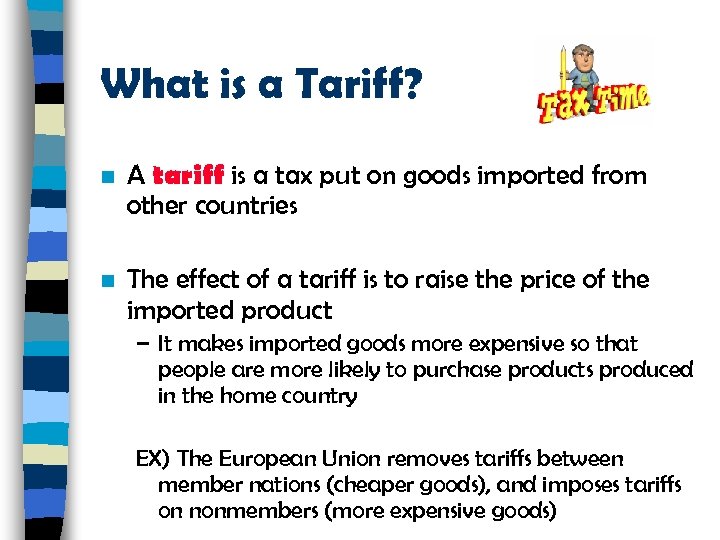 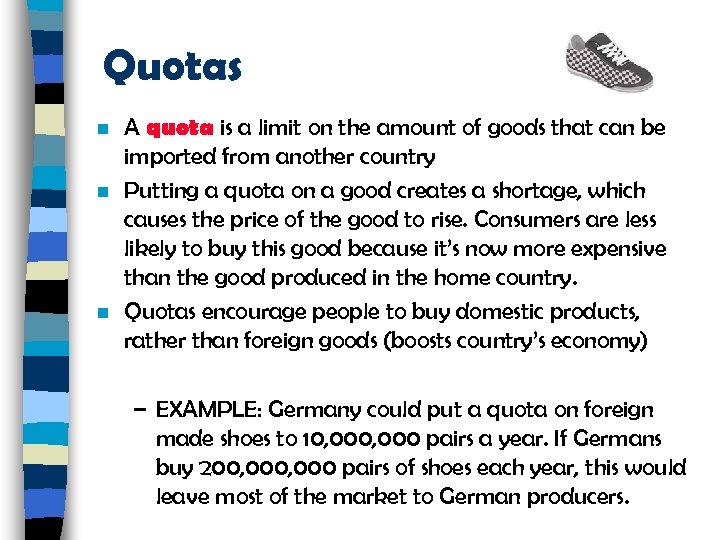 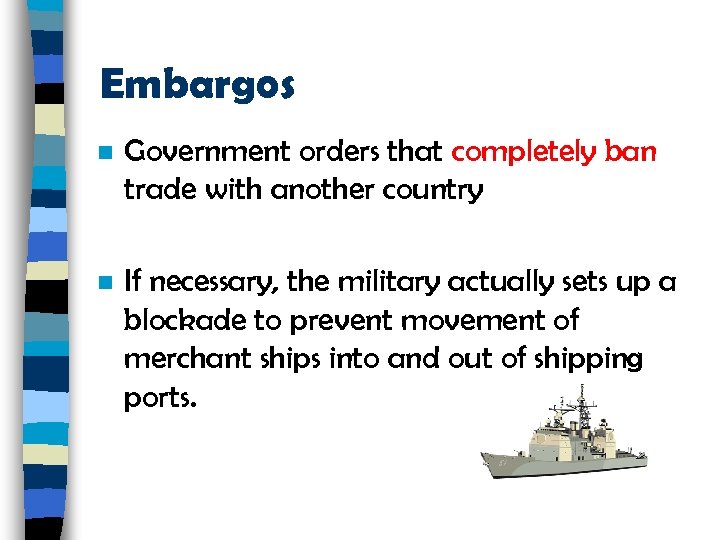 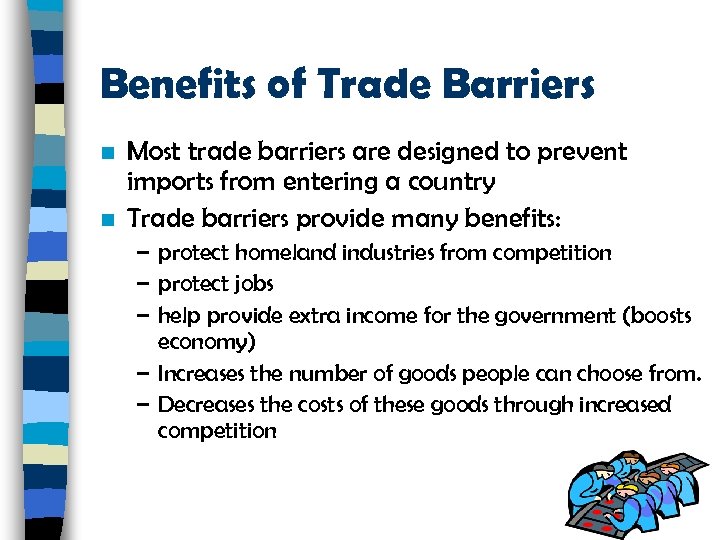 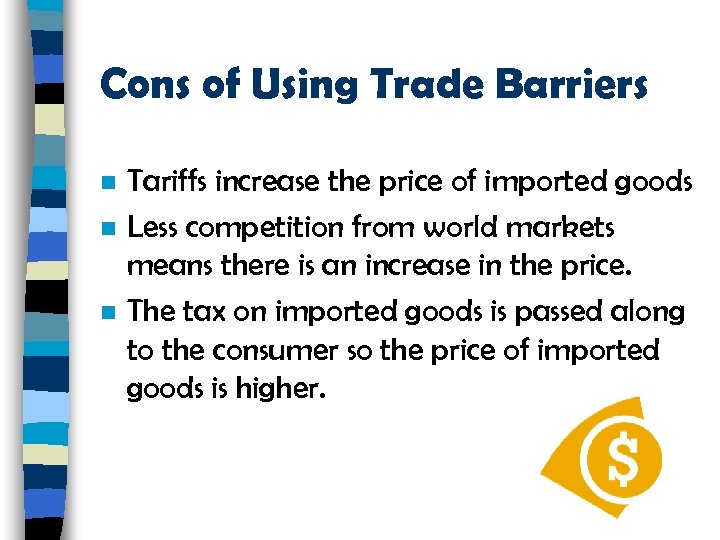 Free Trade Vs. Trade Barriers – Free Trade: Nothing hinders or gets in the way from two nations trading with each other. – Trade Barriers: Trade is difficult because things get in the way. n There are costs and benefits related to free trade as well as trade barriers.

Benefits of Free Trade n n When nations specialize and trade, total world sales are increased Companies can produce foreign markets as well as domestic markets n This means there is potential for making more money as there are more markets to sell goods or services in n n More variety of goods are available from all over the world (not just from the home country) Prices of goods are decreased through increased global competition

Cons of Free Trade n The domestic country can lose money because more people are buying foreign goods (cheaper) – Example: In the U. S. , people might want to buy a foreign automobile like a Honda or Toyota instead of an American made car n Less money will go into the domestic market place and this can cause factories to be closed and jobs to be eliminated

3 Economic Trade Barriers n The most common trade restrictions are: 1. tariffs—taxes on imported goods 2. quotas—limits on the quantity of goods that are imported 3. embargos-- a complete ban on trading between countries

What is a Tariff? n A tariff is a tax put on goods imported from other countries n The effect of a tariff is to raise the price of the imported product – It makes imported goods more expensive so that people are more likely to purchase products produced in the home country EX) The European Union removes tariffs between member nations (cheaper goods), and imposes tariffs on nonmembers (more expensive goods)

Quotas n n n A quota is a limit on the amount of goods that can be imported from another country Putting a quota on a good creates a shortage, which causes the price of the good to rise. Consumers are less likely to buy this good because it’s now more expensive than the good produced in the home country. Quotas encourage people to buy domestic products, rather than foreign goods (boosts country’s economy) – EXAMPLE: Germany could put a quota on foreign made shoes to 10, 000 pairs a year. If Germans buy 200, 000 pairs of shoes each year, this would leave most of the market to German producers.

Embargos n Government orders that completely ban trade with another country n If necessary, the military actually sets up a blockade to prevent movement of merchant ships into and out of shipping ports.

Embargos n The embargo is the harshest type of trade barrier and is usually enacted for political purposes to hurt a country economically and thus undermine the political leaders in charge. – EXAMPLE: the United Kingdom has placed an embargo on a Chinese toy-making company because they were using lead-based paint in their toys. UK no longer trades with this company. – EXAMPLE: US placed an embargo on Cuba after the Cuban Missile Crisis (still in effect today).

Benefits of Trade Barriers n n Most trade barriers are designed to prevent imports from entering a country Trade barriers provide many benefits: – protect homeland industries from competition – protect jobs – help provide extra income for the government (boosts economy) – Increases the number of goods people can choose from. – Decreases the costs of these goods through increased competition