Tracing the Myth of the Hermaphrodite The 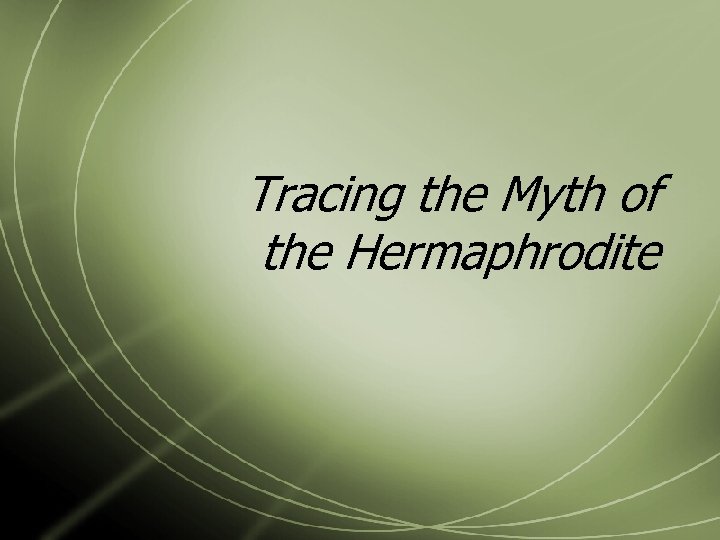 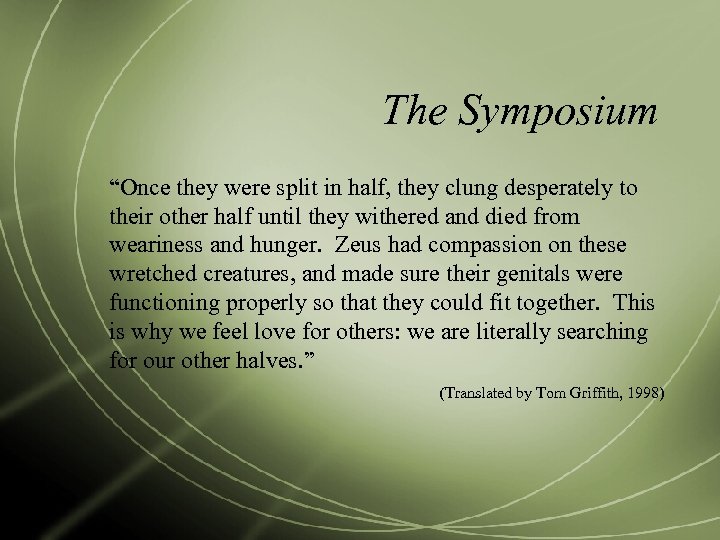 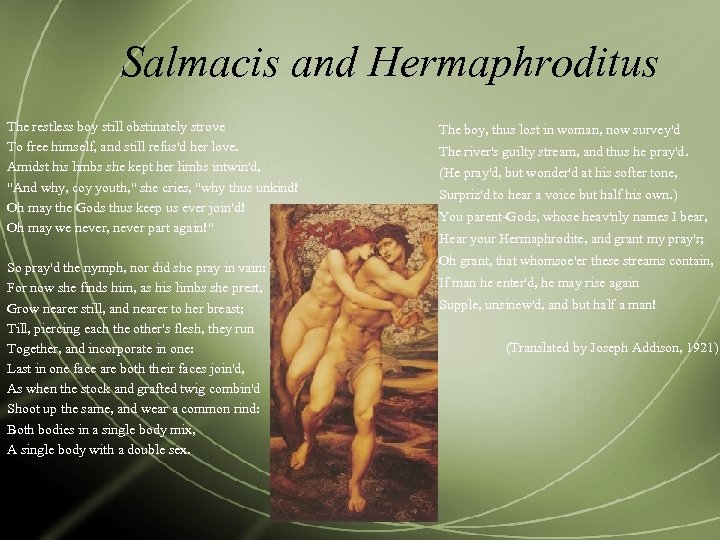 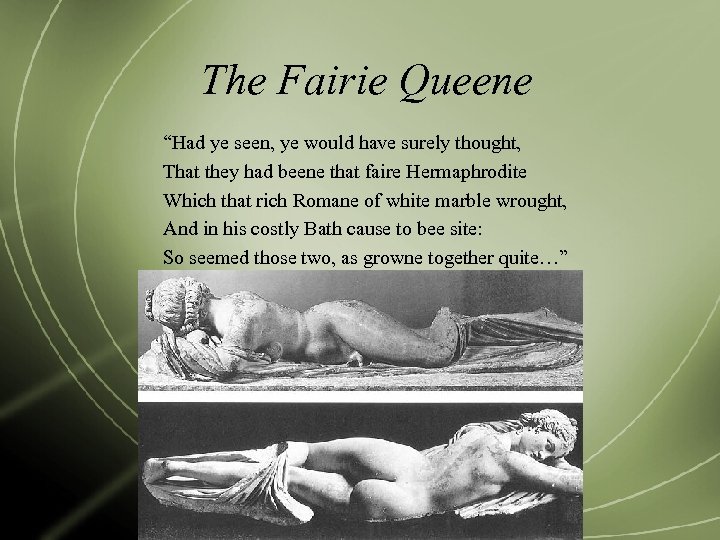 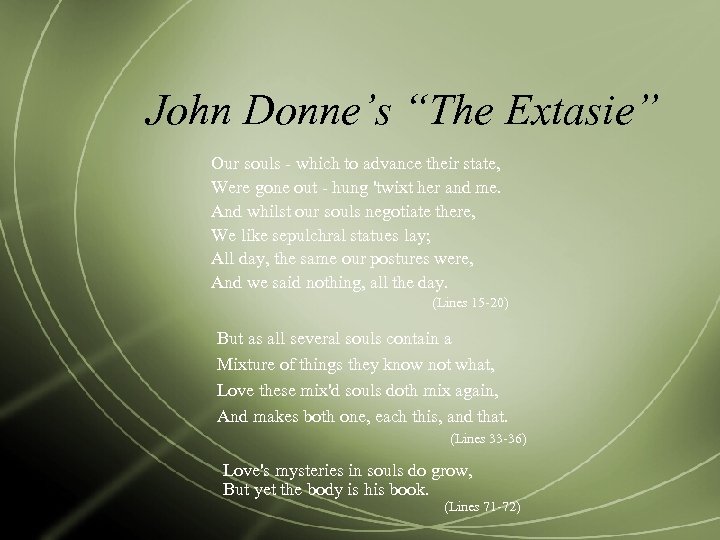 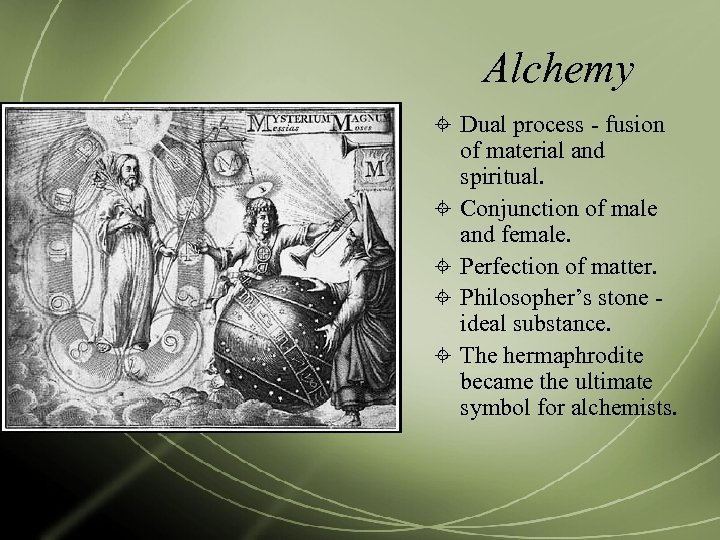 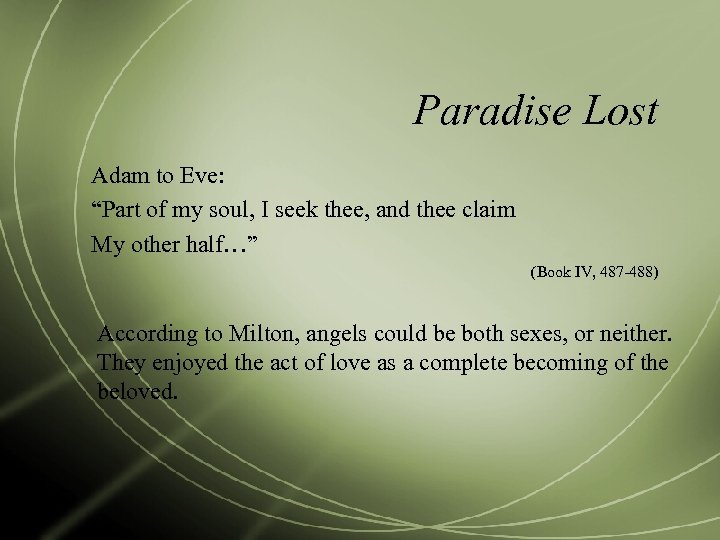 Скачать презентацию Tracing the Myth of the Hermaphrodite The

Tracing the Myth of the Hermaphrodite

The Symposium “Once they were split in half, they clung desperately to their other half until they withered and died from weariness and hunger. Zeus had compassion on these wretched creatures, and made sure their genitals were functioning properly so that they could fit together. This is why we feel love for others: we are literally searching for our other halves. ” (Translated by Tom Griffith, 1998)

Adam and Eve “And Adam said, this is now bone of my bones, and flesh of my flesh: she shall be called woman, because she was taken out of man. Therefore shall a man leave his father and mother, and shall cleave unto his wife: and they shall be one flesh. ” (Genesis II, 23 -25)

Salmacis and Hermaphroditus The restless boy still obstinately strove To free himself, and still refus'd her love. Amidst his limbs she kept her limbs intwin'd, "And why, coy youth, " she cries, "why thus unkind! Oh may the Gods thus keep us ever join'd! Oh may we never, never part again!" So pray'd the nymph, nor did she pray in vain: For now she finds him, as his limbs she prest, Grow nearer still, and nearer to her breast; Till, piercing each the other's flesh, they run Together, and incorporate in one: Last in one face are both their faces join'd, As when the stock and grafted twig combin'd Shoot up the same, and wear a common rind: Both bodies in a single body mix, A single body with a double sex. The boy, thus lost in woman, now survey'd The river's guilty stream, and thus he pray'd. (He pray'd, but wonder'd at his softer tone, Surpriz'd to hear a voice but half his own. ) You parent-Gods, whose heav'nly names I bear, Hear your Hermaphrodite, and grant my pray'r; Oh grant, that whomsoe'er these streams contain, If man he enter'd, he may rise again Supple, unsinew'd, and but half a man! (Translated by Joseph Addison, 1921)

The Fairie Queene “Had ye seen, ye would have surely thought, That they had beene that faire Hermaphrodite Which that rich Romane of white marble wrought, And in his costly Bath cause to bee site: So seemed those two, as growne together quite…”

John Donne’s “The Extasie” Our souls - which to advance their state, Were gone out - hung 'twixt her and me. And whilst our souls negotiate there, We like sepulchral statues lay; All day, the same our postures were, And we said nothing, all the day. (Lines 15 -20) But as all several souls contain a Mixture of things they know not what, Love these mix'd souls doth mix again, And makes both one, each this, and that. (Lines 33 -36) Love's mysteries in souls do grow, But yet the body is his book. (Lines 71 -72)

Paradise Lost Adam to Eve: “Part of my soul, I seek thee, and thee claim My other half…” (Book IV, 487 -488) According to Milton, angels could be both sexes, or neither. They enjoyed the act of love as a complete becoming of the beloved.

S tudying in the U nited S tates

Tobacco use is the single largest cause