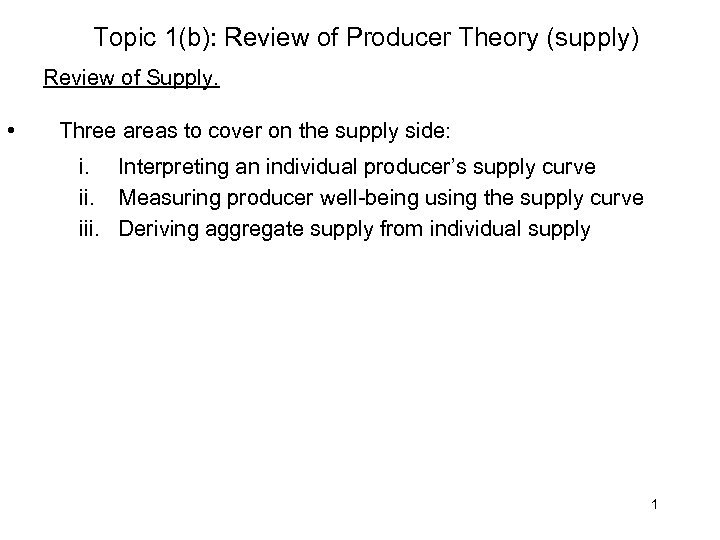 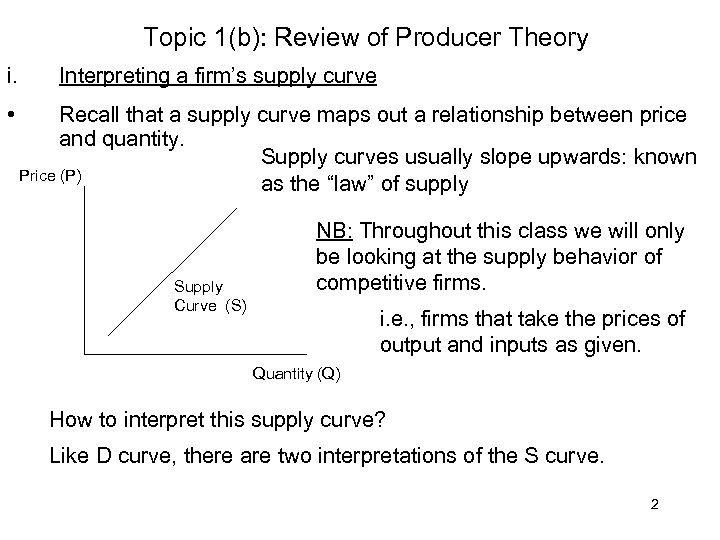 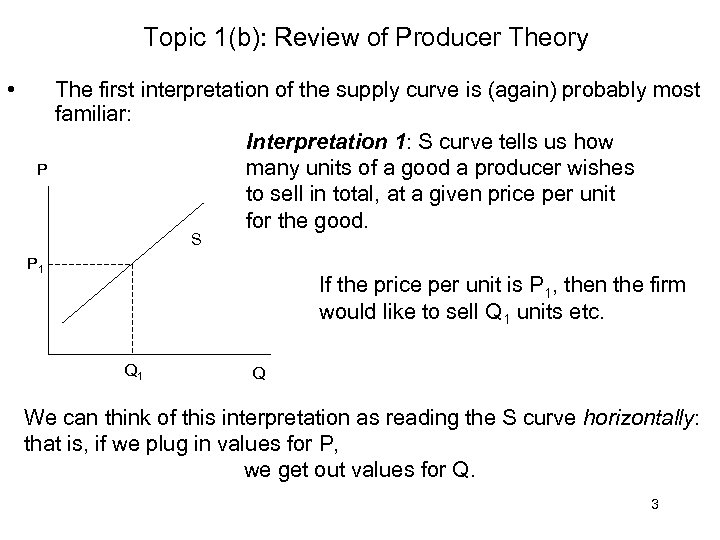 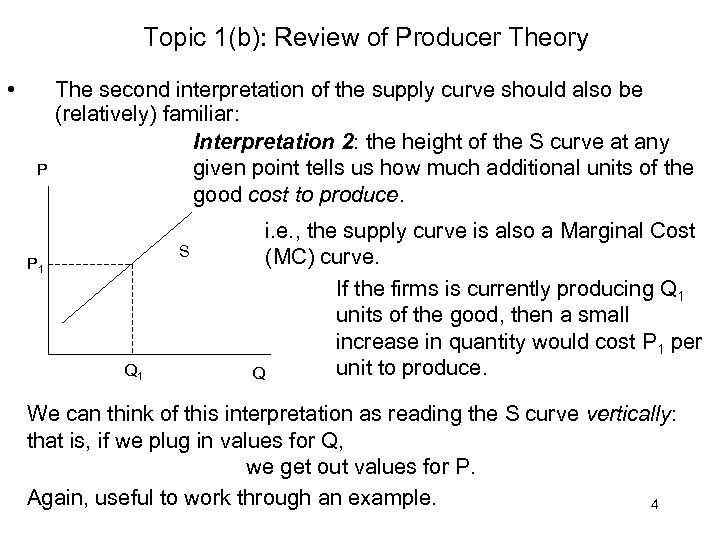 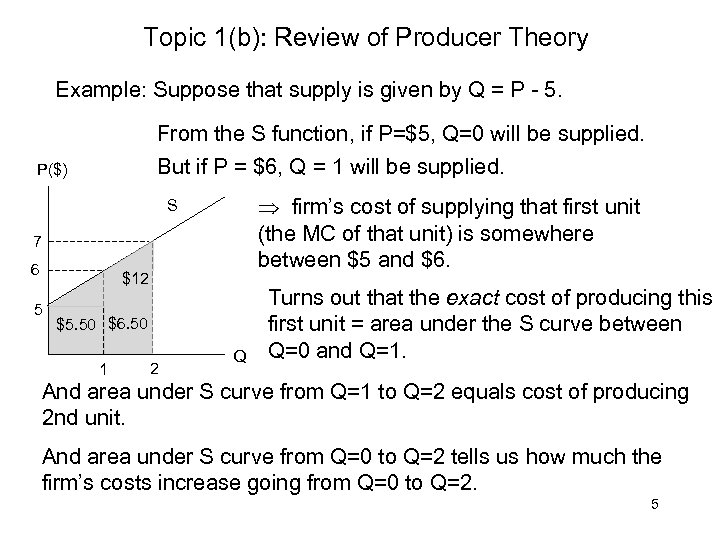 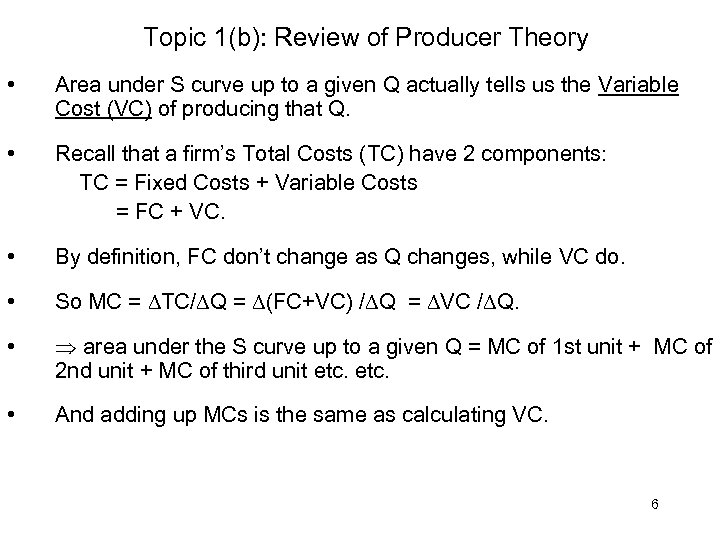 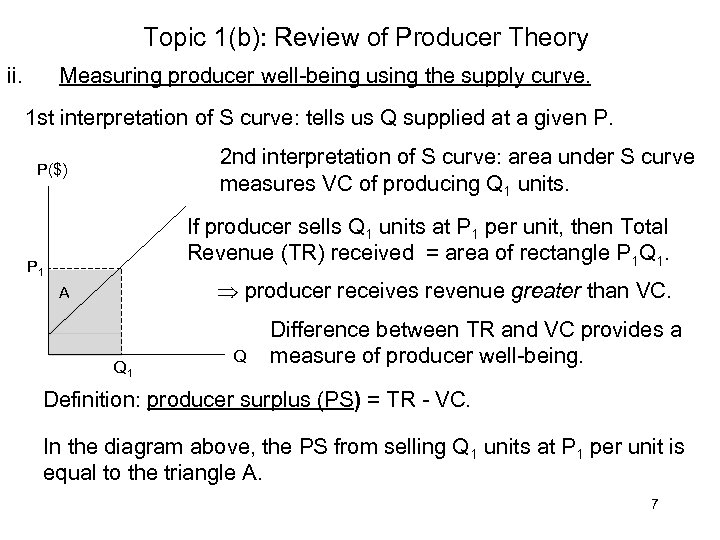 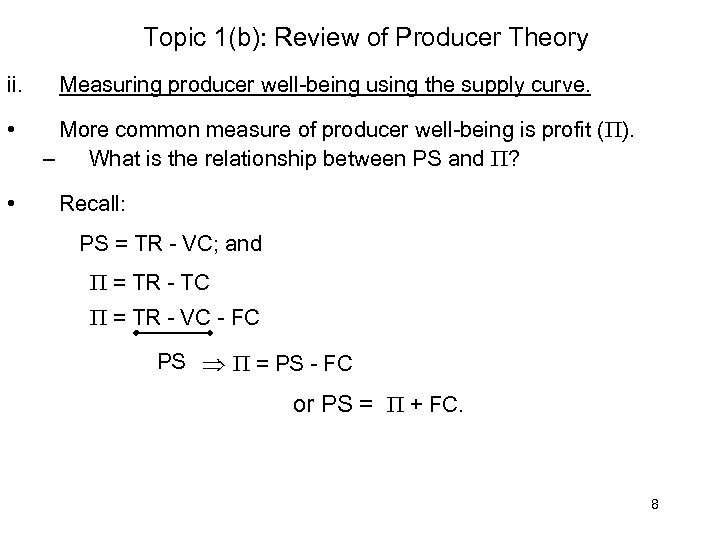 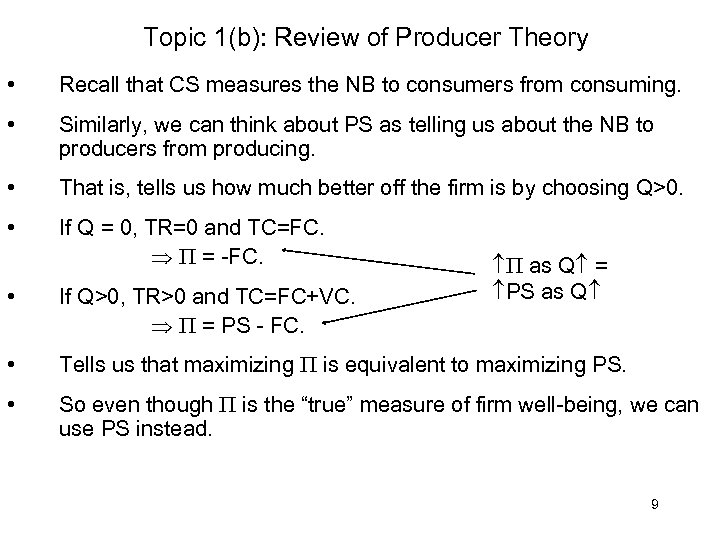 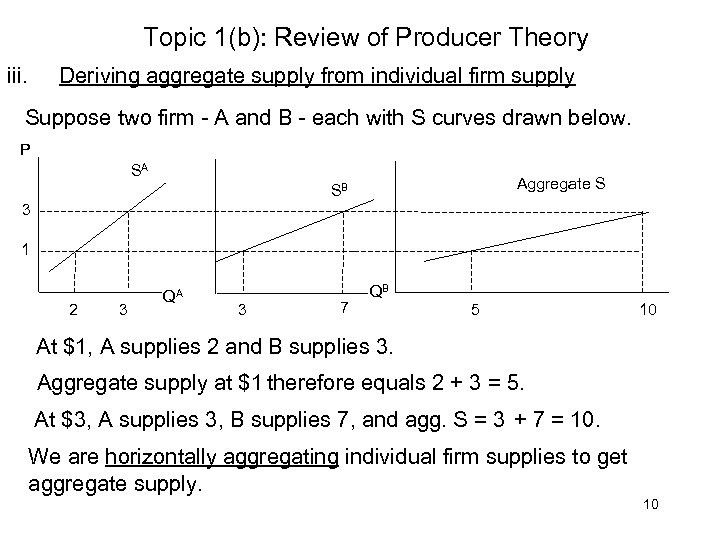 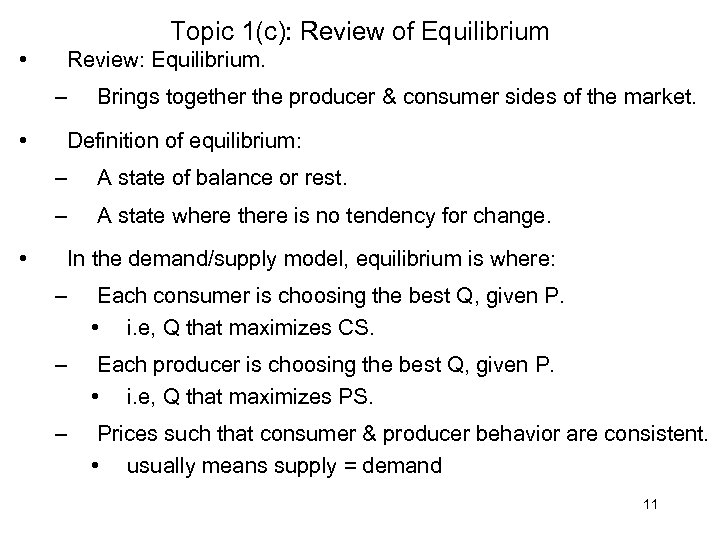 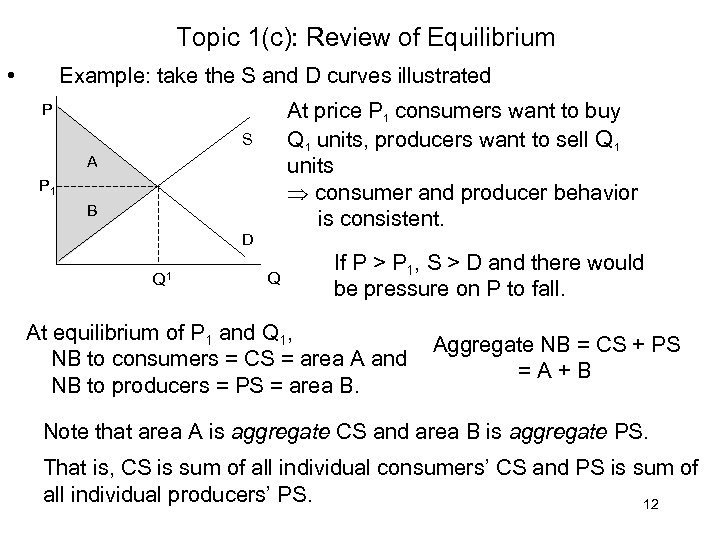 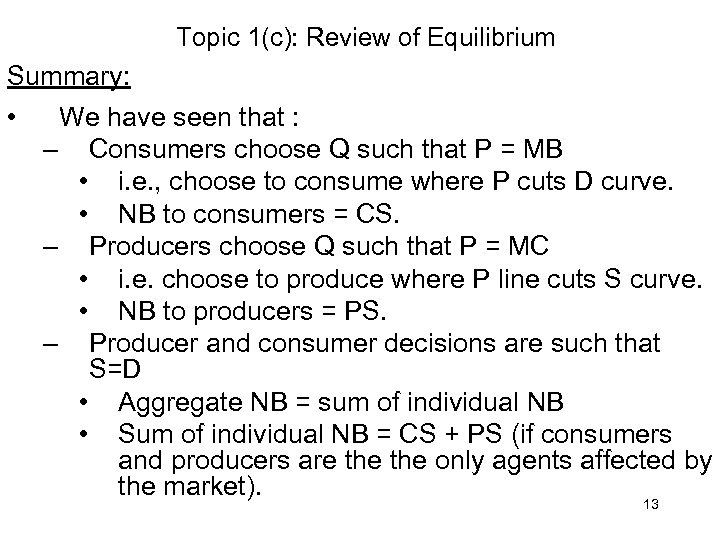 Topic 1(b): Review of Producer Theory i. • Interpreting a firm’s supply curve Recall that a supply curve maps out a relationship between price and quantity. Supply curves usually slope upwards: known Price (P) as the “law” of supply Supply Curve (S) NB: Throughout this class we will only be looking at the supply behavior of competitive firms. i. e. , firms that take the prices of output and inputs as given. Quantity (Q) How to interpret this supply curve? Like D curve, there are two interpretations of the S curve. 2

Topic 1(b): Review of Producer Theory • P The first interpretation of the supply curve is (again) probably most familiar: Interpretation 1: S curve tells us how many units of a good a producer wishes to sell in total, at a given price per unit for the good. S P 1 If the price per unit is P 1, then the firm would like to sell Q 1 units etc. Q 1 Q We can think of this interpretation as reading the S curve horizontally: that is, if we plug in values for P, we get out values for Q. 3

Topic 1(b): Review of Producer Theory • P The second interpretation of the supply curve should also be (relatively) familiar: Interpretation 2: the height of the S curve at any given point tells us how much additional units of the good cost to produce. S P 1 Q 1 i. e. , the supply curve is also a Marginal Cost (MC) curve. If the firms is currently producing Q 1 units of the good, then a small increase in quantity would cost P 1 per unit to produce. Q We can think of this interpretation as reading the S curve vertically: that is, if we plug in values for Q, we get out values for P. Again, useful to work through an example. 4

Topic 1(b): Review of Producer Theory ii. Measuring producer well-being using the supply curve. 1 st interpretation of S curve: tells us Q supplied at a given P. 2 nd interpretation of S curve: area under S curve measures VC of producing Q 1 units. P($) If producer sells Q 1 units at P 1 per unit, then Total Revenue (TR) received = area of rectangle P 1 Q 1. P 1 producer receives revenue greater than VC. A Q 1 Q Difference between TR and VC provides a measure of producer well-being. Definition: producer surplus (PS) = TR - VC. In the diagram above, the PS from selling Q 1 units at P 1 per unit is equal to the triangle A. 7

Topic 1(c): Review of Equilibrium • Example: take the S and D curves illustrated At price P 1 consumers want to buy Q 1 units, producers want to sell Q 1 units consumer and producer behavior is consistent. P S A P 1 B D Q 1 Q If P > P 1, S > D and there would be pressure on P to fall. At equilibrium of P 1 and Q 1, NB to consumers = CS = area A and NB to producers = PS = area B. Aggregate NB = CS + PS =A+B Note that area A is aggregate CS and area B is aggregate PS. That is, CS is sum of all individual consumers’ CS and PS is sum of all individual producers’ PS. 12

Topic 1(c): Review of Equilibrium Summary: • We have seen that : – Consumers choose Q such that P = MB • i. e. , choose to consume where P cuts D curve. • NB to consumers = CS. – Producers choose Q such that P = MC • i. e. choose to produce where P line cuts S curve. • NB to producers = PS. – Producer and consumer decisions are such that S=D • Aggregate NB = sum of individual NB • Sum of individual NB = CS + PS (if consumers and producers are the only agents affected by the market). 13

3 SUPPLY AND DEMAND II: MARKETS AND