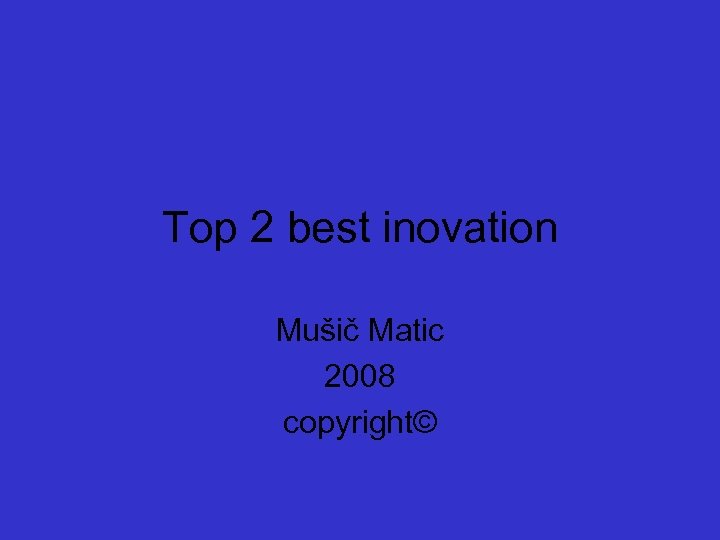 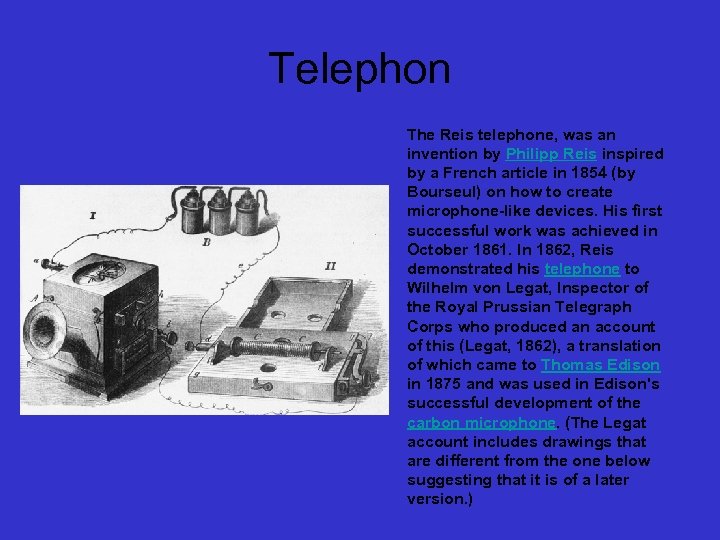 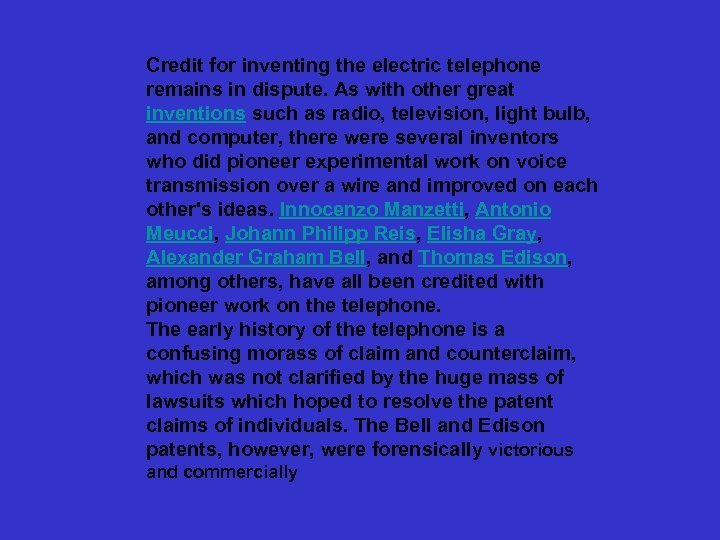 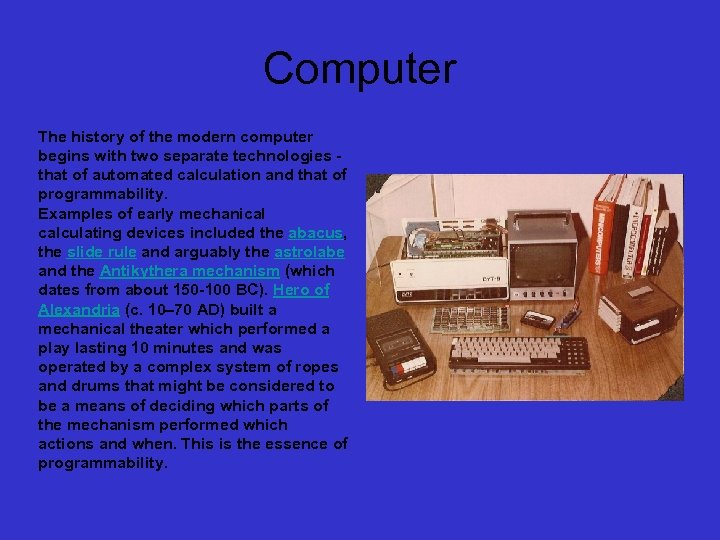 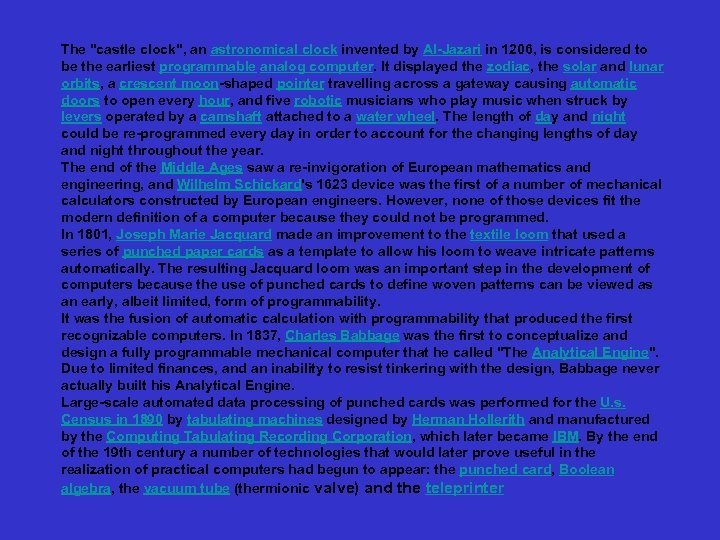 Telephon The Reis telephone, was an invention by Philipp Reis inspired by a French article in 1854 (by Bourseul) on how to create microphone-like devices. His first successful work was achieved in October 1861. In 1862, Reis demonstrated his telephone to Wilhelm von Legat, Inspector of the Royal Prussian Telegraph Corps who produced an account of this (Legat, 1862), a translation of which came to Thomas Edison in 1875 and was used in Edison's successful development of the carbon microphone. (The Legat account includes drawings that are different from the one below suggesting that it is of a later version. )

Credit for inventing the electric telephone remains in dispute. As with other great inventions such as radio, television, light bulb, and computer, there were several inventors who did pioneer experimental work on voice transmission over a wire and improved on each other's ideas. Innocenzo Manzetti, Antonio Meucci, Johann Philipp Reis, Elisha Gray, Alexander Graham Bell, and Thomas Edison, among others, have all been credited with pioneer work on the telephone. The early history of the telephone is a confusing morass of claim and counterclaim, which was not clarified by the huge mass of lawsuits which hoped to resolve the patent claims of individuals. The Bell and Edison patents, however, were forensically victorious and commercially

Computer The history of the modern computer begins with two separate technologies that of automated calculation and that of programmability. Examples of early mechanical calculating devices included the abacus, the slide rule and arguably the astrolabe and the Antikythera mechanism (which dates from about 150 -100 BC). Hero of Alexandria (c. 10– 70 AD) built a mechanical theater which performed a play lasting 10 minutes and was operated by a complex system of ropes and drums that might be considered to be a means of deciding which parts of the mechanism performed which actions and when. This is the essence of programmability.

The "castle clock", an astronomical clock invented by Al-Jazari in 1206, is considered to be the earliest programmable analog computer. It displayed the zodiac, the solar and lunar orbits, a crescent moon-shaped pointer travelling across a gateway causing automatic doors to open every hour, and five robotic musicians who play music when struck by levers operated by a camshaft attached to a water wheel. The length of day and night could be re-programmed every day in order to account for the changing lengths of day and night throughout the year. The end of the Middle Ages saw a re-invigoration of European mathematics and engineering, and Wilhelm Schickard's 1623 device was the first of a number of mechanical calculators constructed by European engineers. However, none of those devices fit the modern definition of a computer because they could not be programmed. In 1801, Joseph Marie Jacquard made an improvement to the textile loom that used a series of punched paper cards as a template to allow his loom to weave intricate patterns automatically. The resulting Jacquard loom was an important step in the development of computers because the use of punched cards to define woven patterns can be viewed as an early, albeit limited, form of programmability. It was the fusion of automatic calculation with programmability that produced the first recognizable computers. In 1837, Charles Babbage was the first to conceptualize and design a fully programmable mechanical computer that he called "The Analytical Engine". Due to limited finances, and an inability to resist tinkering with the design, Babbage never actually built his Analytical Engine. Large-scale automated data processing of punched cards was performed for the U. s. Census in 1890 by tabulating machines designed by Herman Hollerith and manufactured by the Computing Tabulating Recording Corporation, which later became IBM. By the end of the 19 th century a number of technologies that would later prove useful in the realization of practical computers had begun to appear: the punched card, Boolean algebra, the vacuum tube (thermionic valve) and the teleprinter.