There a lot of unusual and 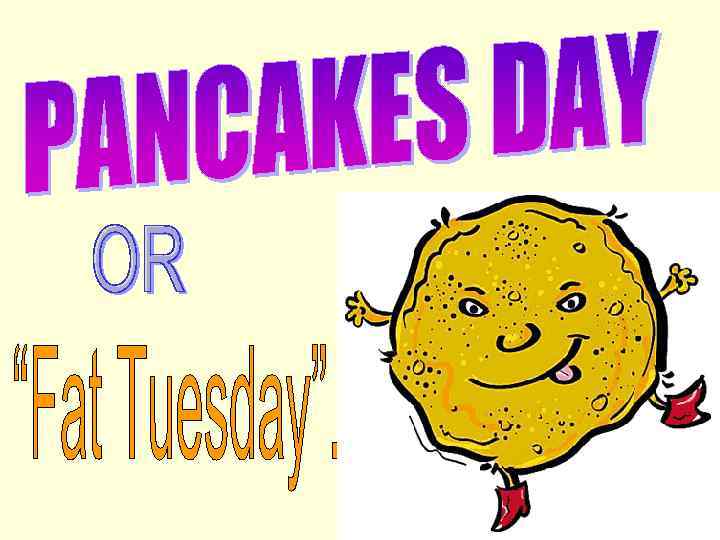 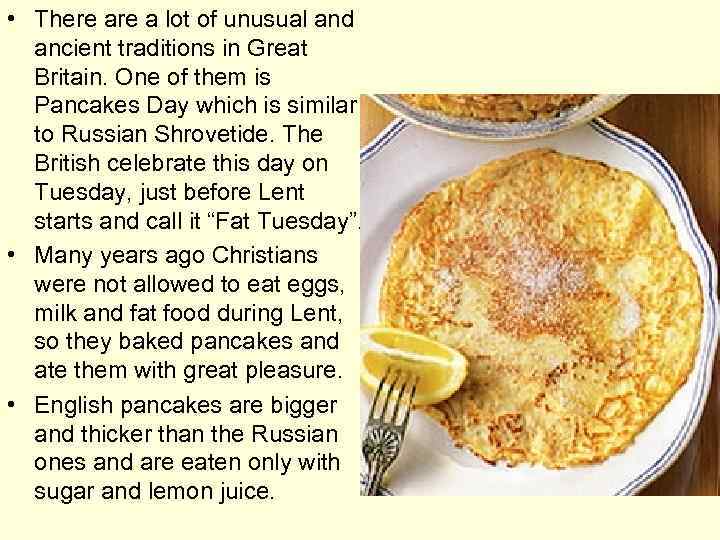 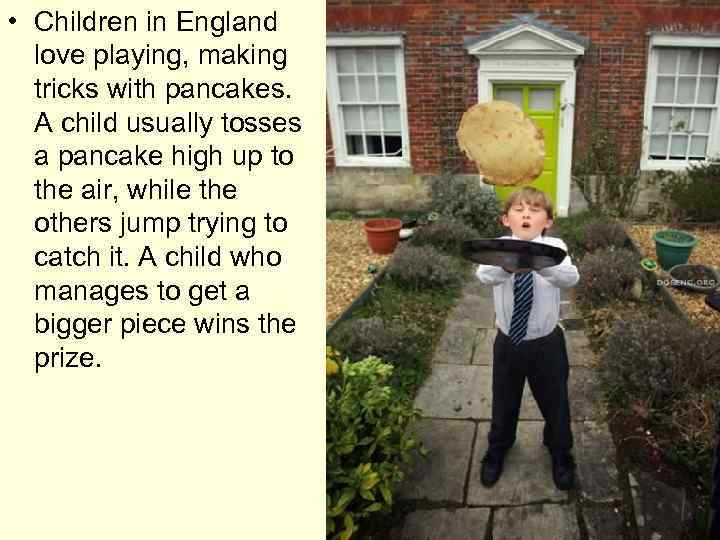 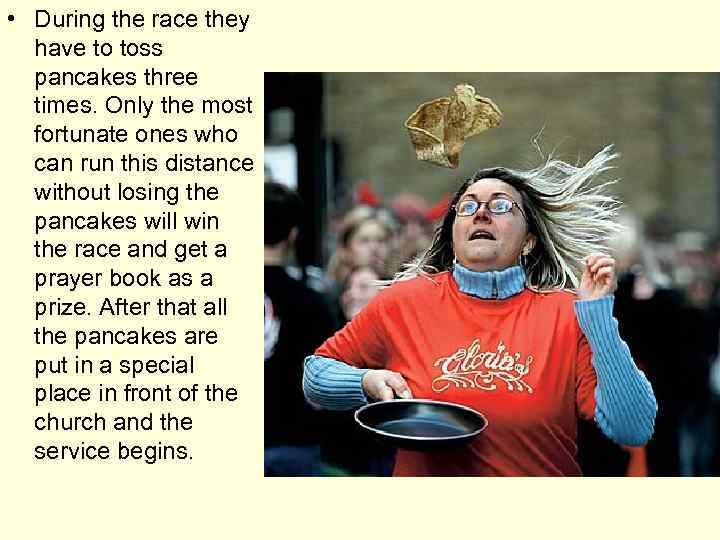 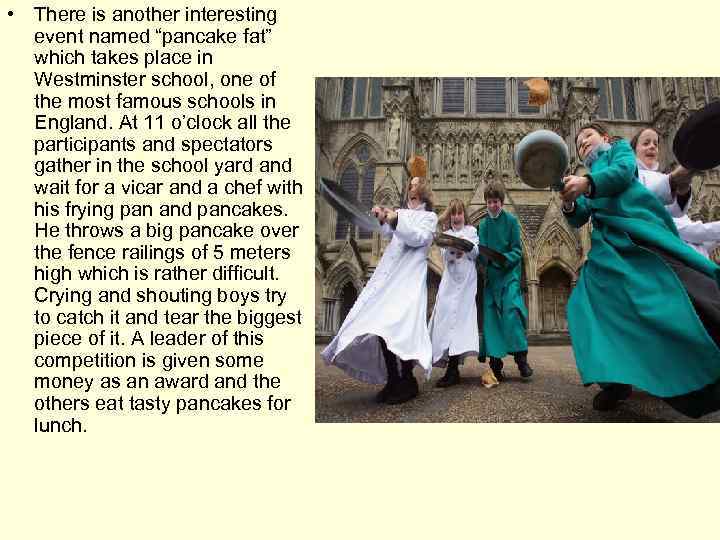 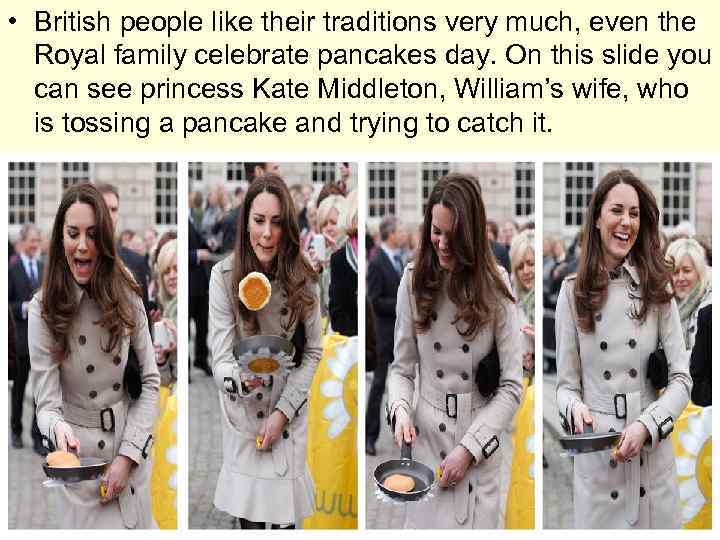 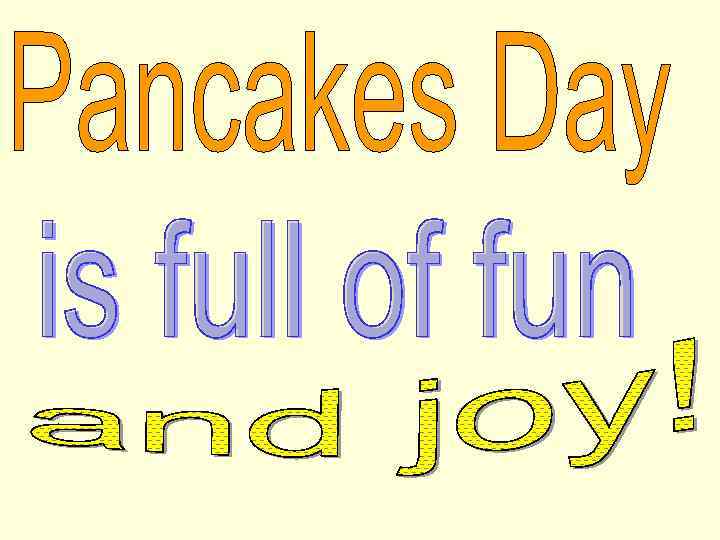 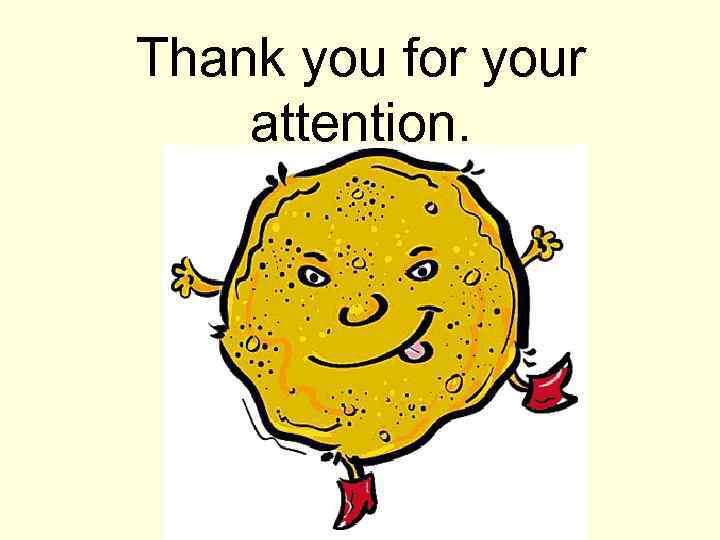 Скачать презентацию There a lot of unusual and

• There a lot of unusual and ancient traditions in Great Britain. One of them is Pancakes Day which is similar to Russian Shrovetide. The British celebrate this day on Tuesday, just before Lent starts and call it “Fat Tuesday”. • Many years ago Christians were not allowed to eat eggs, milk and fat food during Lent, so they baked pancakes and ate them with great pleasure. • English pancakes are bigger and thicker than the Russian ones and are eaten only with sugar and lemon juice.

• Children in England love playing, making tricks with pancakes. A child usually tosses a pancake high up to the air, while the others jump trying to catch it. A child who manages to get a bigger piece wins the prize.

• Olney is a small town in Buckingampshire which is famous for its “tasty” festival. The most interesting event during the festival is “pancake races”, running with a frying pan and pancakes. • The history of these races goes back to the 15 th century. In 1445 a housewife who was baking pancakes in her kitchen heard the church bells calling her to the church service. She didn’t have time to finish baking her pancakes, so she grasped the frying pan and ran to the church immediately. The Vicar waiting for all his parish was so astonished to see her that he gifted her with the prayer book.

• These pancake races were resumed in 1948 and since then they have regularly been observed in Olney. According to the rules, all the participants of the race should wear an apron, a hat or a scarf on the head. The race starts at the town square and finishes at the church (the distance is about 400 metres). The church bell rings twice: at 11 o’clock as a signal to start baking pancakes and for the second time when all the participants gather at the town square. They have to come with their frying pans and pancakes on them.

• During the race they have to toss pancakes three times. Only the most fortunate ones who can run this distance without losing the pancakes will win the race and get a prayer book as a prize. After that all the pancakes are put in a special place in front of the church and the service begins.

• There is another interesting event named “pancake fat” which takes place in Westminster school, one of the most famous schools in England. At 11 o’clock all the participants and spectators gather in the school yard and wait for a vicar and a chef with his frying pan and pancakes. He throws a big pancake over the fence railings of 5 meters high which is rather difficult. Crying and shouting boys try to catch it and tear the biggest piece of it. A leader of this competition is given some money as an award and the others eat tasty pancakes for lunch.

• British people like their traditions very much, even the Royal family celebrate pancakes day. On this slide you can see princess Kate Middleton, William’s wife, who is tossing a pancake and trying to catch it.