Theme The Search for Meaning What is 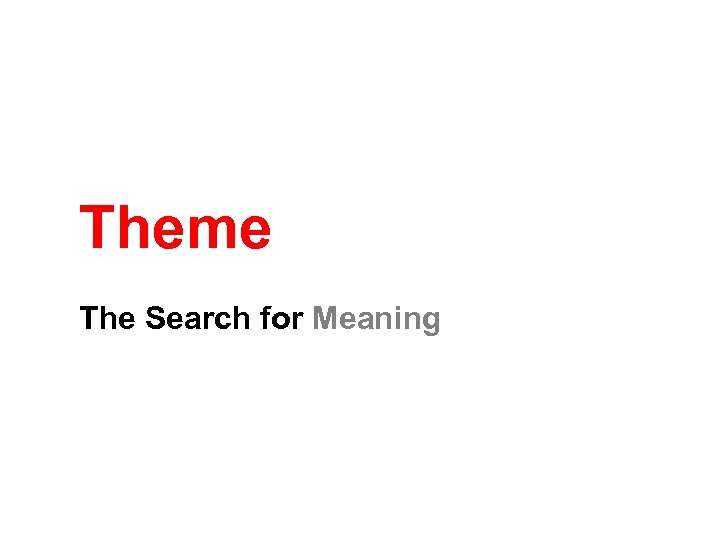 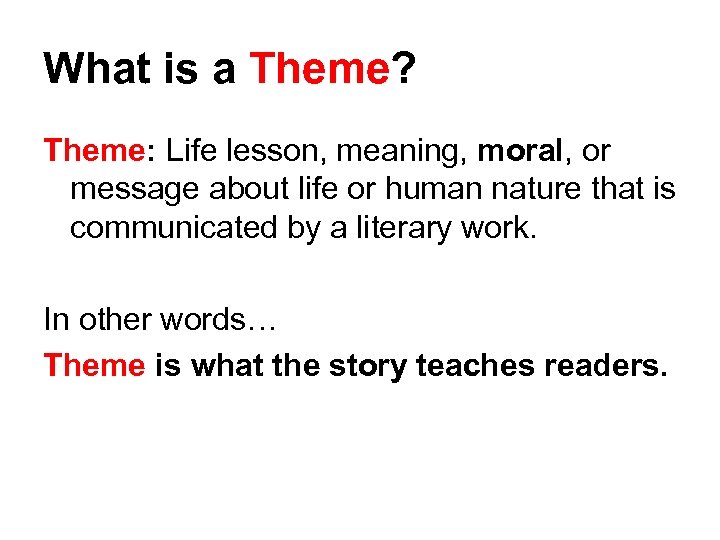 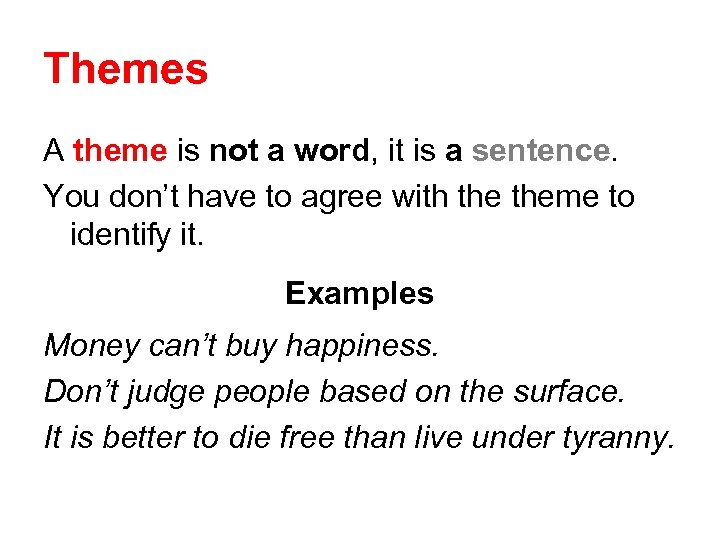 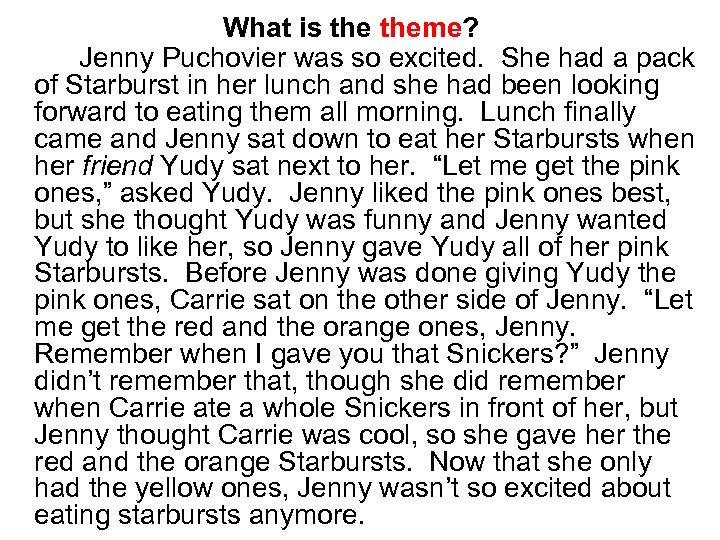 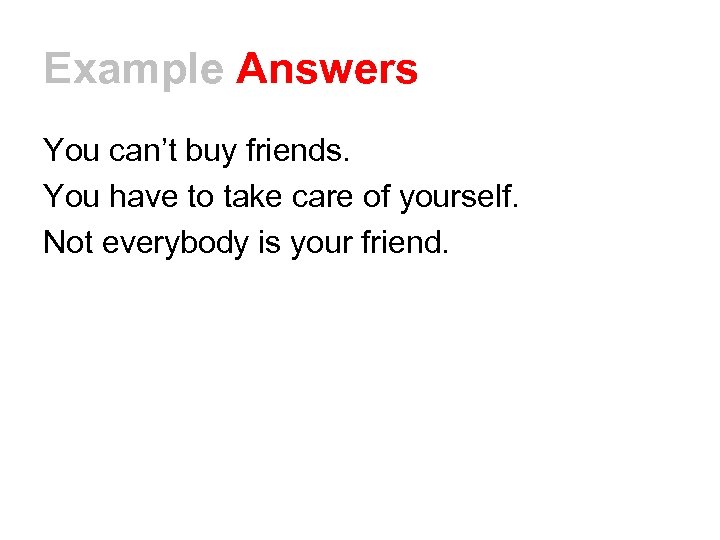 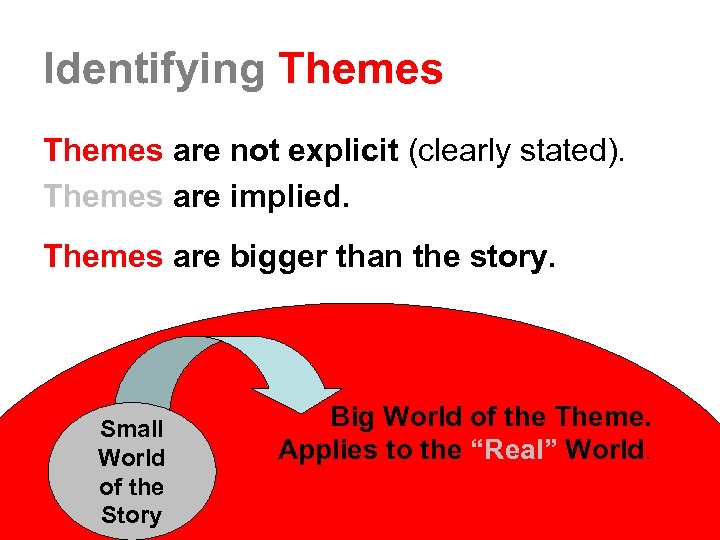 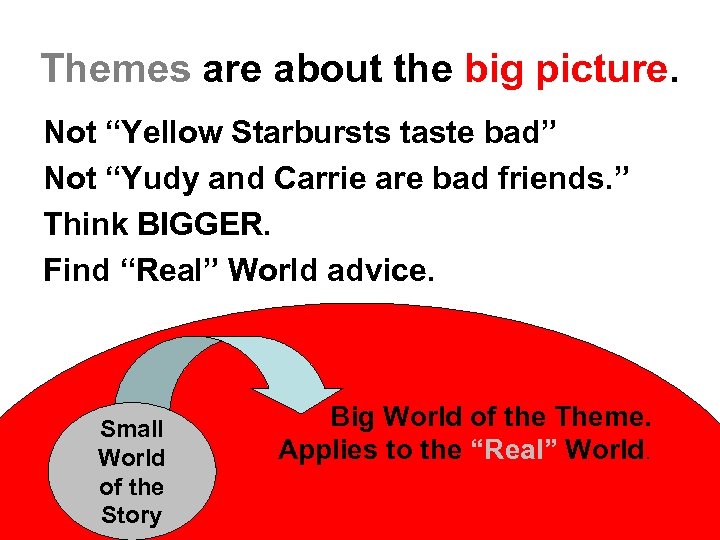 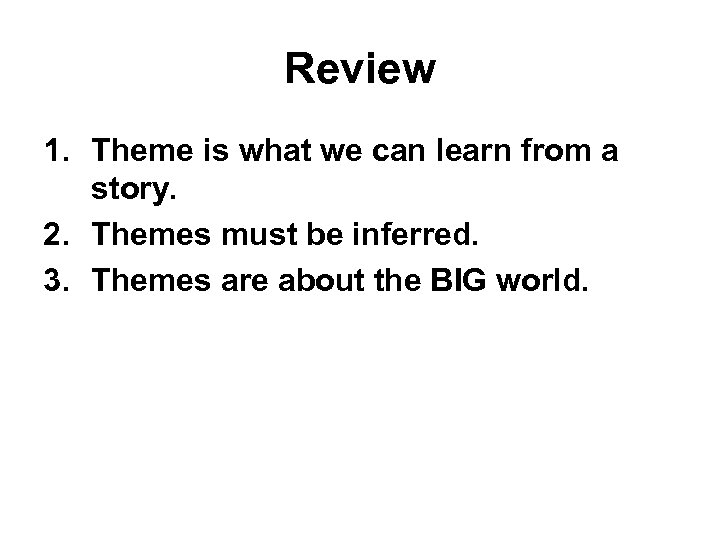 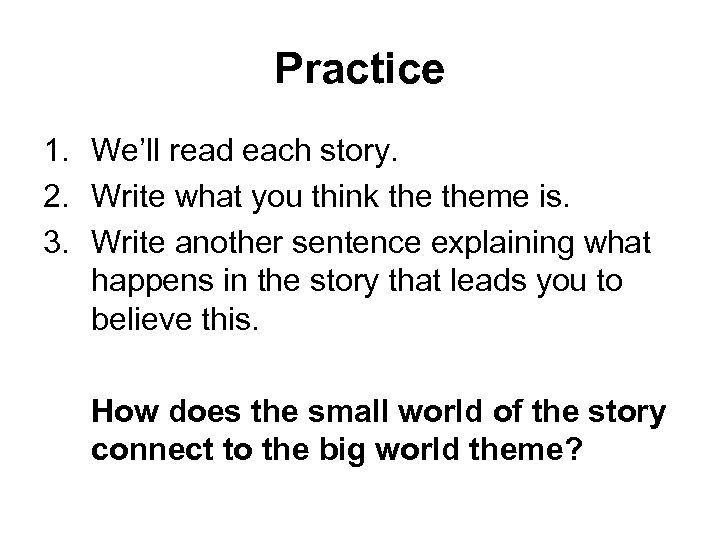 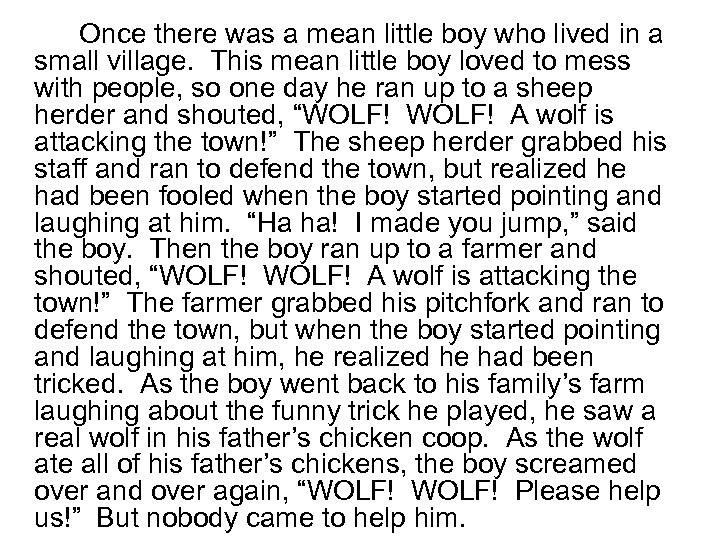 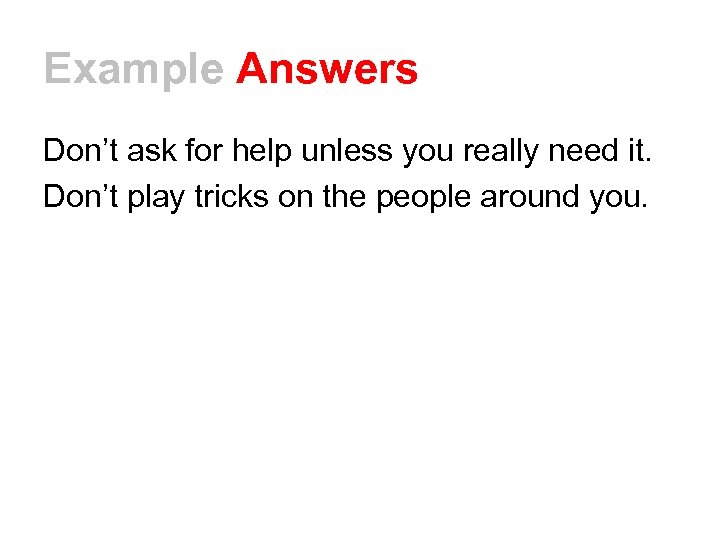 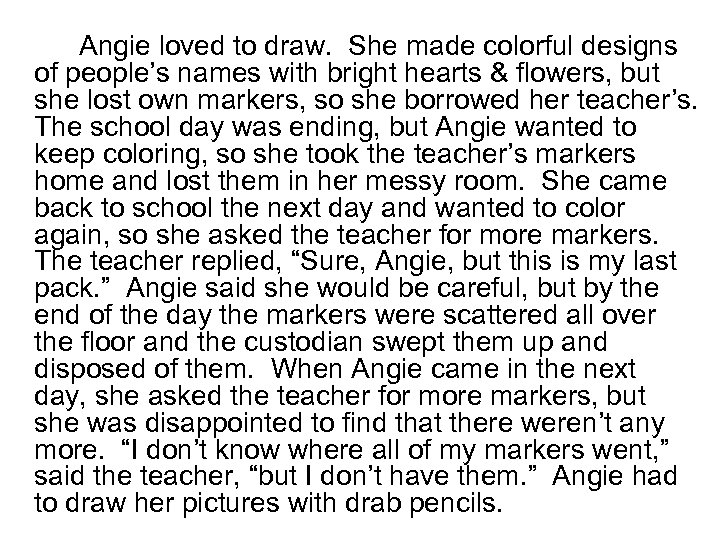 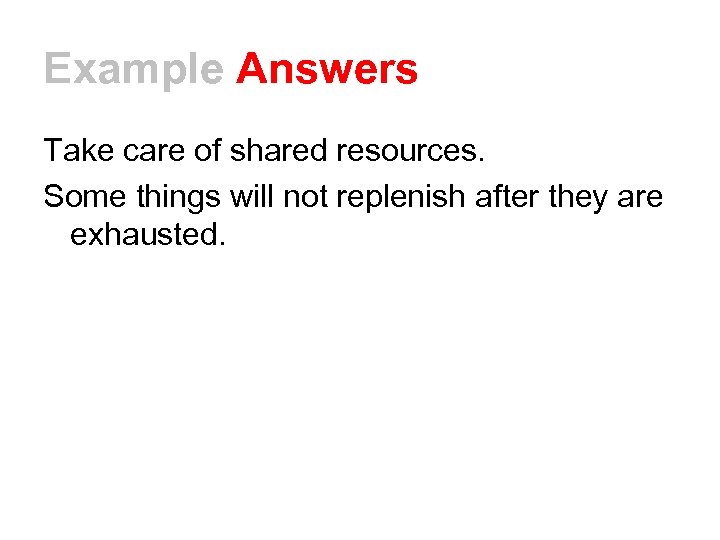 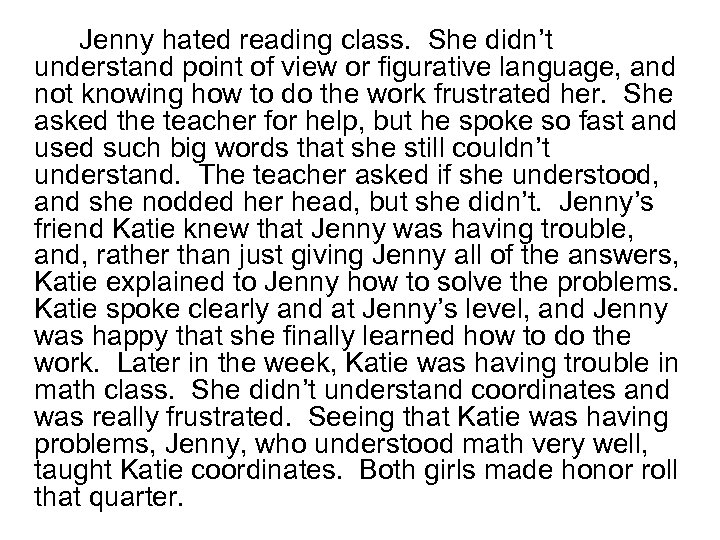 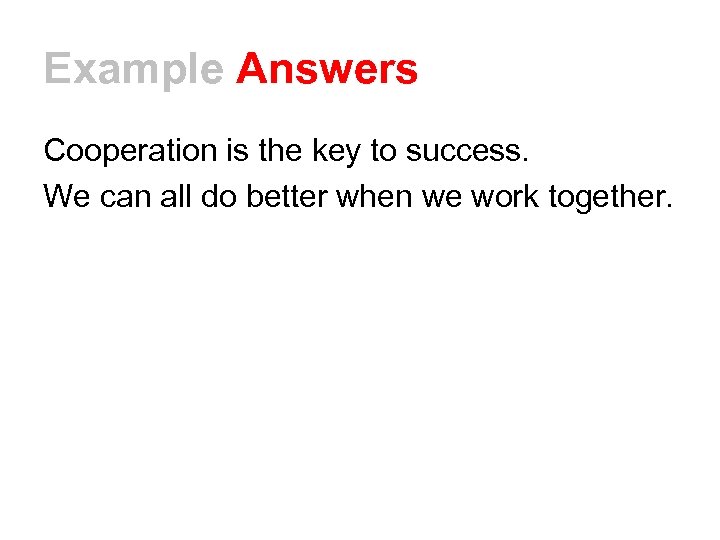 Скачать презентацию Theme The Search for Meaning What is

Theme The Search for Meaning

What is a Theme? Theme: Life lesson, meaning, moral, or message about life or human nature that is communicated by a literary work. In other words… Theme is what the story teaches readers.

Themes A theme is not a word, it is a sentence. You don’t have to agree with theme to identify it. Examples Money can’t buy happiness. Don’t judge people based on the surface. It is better to die free than live under tyranny.

What is theme? Jenny Puchovier was so excited. She had a pack of Starburst in her lunch and she had been looking forward to eating them all morning. Lunch finally came and Jenny sat down to eat her Starbursts when her friend Yudy sat next to her. “Let me get the pink ones, ” asked Yudy. Jenny liked the pink ones best, but she thought Yudy was funny and Jenny wanted Yudy to like her, so Jenny gave Yudy all of her pink Starbursts. Before Jenny was done giving Yudy the pink ones, Carrie sat on the other side of Jenny. “Let me get the red and the orange ones, Jenny. Remember when I gave you that Snickers? ” Jenny didn’t remember that, though she did remember when Carrie ate a whole Snickers in front of her, but Jenny thought Carrie was cool, so she gave her the red and the orange Starbursts. Now that she only had the yellow ones, Jenny wasn’t so excited about eating starbursts anymore.

Example Answers You can’t buy friends. You have to take care of yourself. Not everybody is your friend.

Themes are about the big picture. Not “Yellow Starbursts taste bad” Not “Yudy and Carrie are bad friends. ” Think BIGGER. Find “Real” World advice. Small World of the Story Big World of the Theme. Applies to the “Real” World.

Review 1. Theme is what we can learn from a story. 2. Themes must be inferred. 3. Themes are about the BIG world.

Practice 1. We’ll read each story. 2. Write what you think theme is. 3. Write another sentence explaining what happens in the story that leads you to believe this. How does the small world of the story connect to the big world theme?

Example Answers Don’t ask for help unless you really need it. Don’t play tricks on the people around you.

Angie loved to draw. She made colorful designs of people’s names with bright hearts & flowers, but she lost own markers, so she borrowed her teacher’s. The school day was ending, but Angie wanted to keep coloring, so she took the teacher’s markers home and lost them in her messy room. She came back to school the next day and wanted to color again, so she asked the teacher for more markers. The teacher replied, “Sure, Angie, but this is my last pack. ” Angie said she would be careful, but by the end of the day the markers were scattered all over the floor and the custodian swept them up and disposed of them. When Angie came in the next day, she asked the teacher for more markers, but she was disappointed to find that there weren’t any more. “I don’t know where all of my markers went, ” said the teacher, “but I don’t have them. ” Angie had to draw her pictures with drab pencils.

Example Answers Take care of shared resources. Some things will not replenish after they are exhausted.

Jenny hated reading class. She didn’t understand point of view or figurative language, and not knowing how to do the work frustrated her. She asked the teacher for help, but he spoke so fast and used such big words that she still couldn’t understand. The teacher asked if she understood, and she nodded her head, but she didn’t. Jenny’s friend Katie knew that Jenny was having trouble, and, rather than just giving Jenny all of the answers, Katie explained to Jenny how to solve the problems. Katie spoke clearly and at Jenny’s level, and Jenny was happy that she finally learned how to do the work. Later in the week, Katie was having trouble in math class. She didn’t understand coordinates and was really frustrated. Seeing that Katie was having problems, Jenny, who understood math very well, taught Katie coordinates. Both girls made honor roll that quarter.

Example Answers Cooperation is the key to success. We can all do better when we work together.