The United Kingdom The Location The 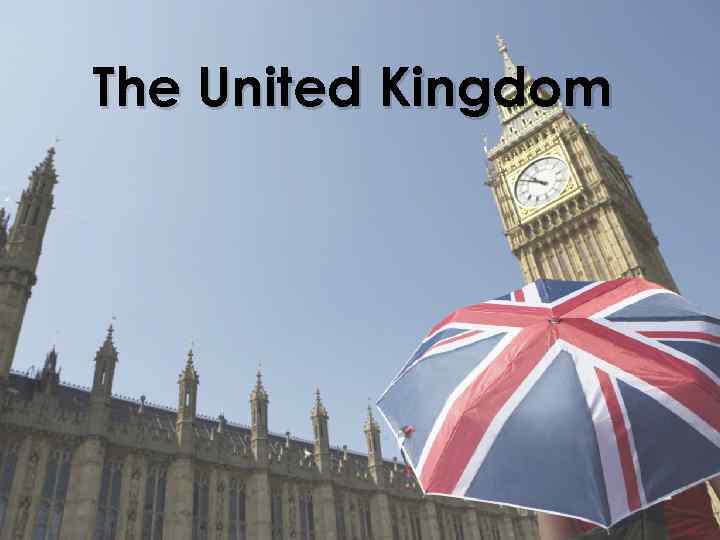 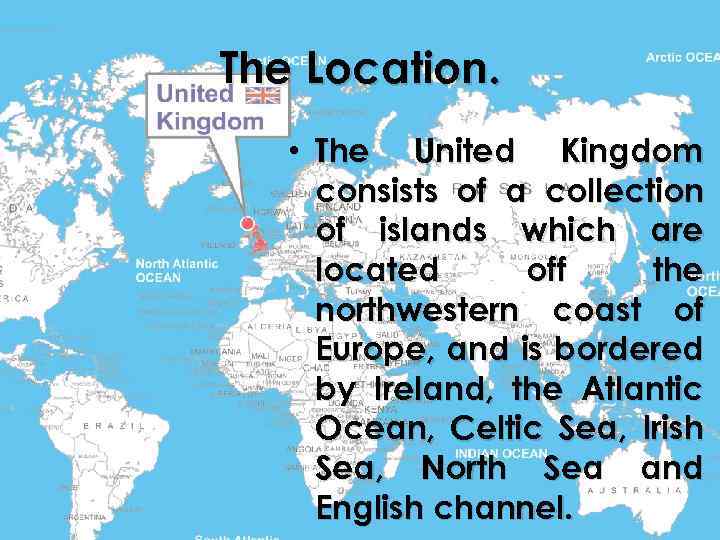 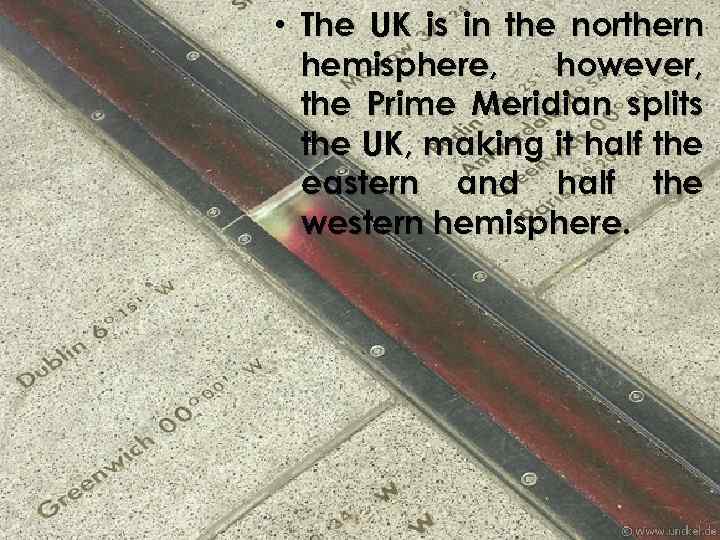 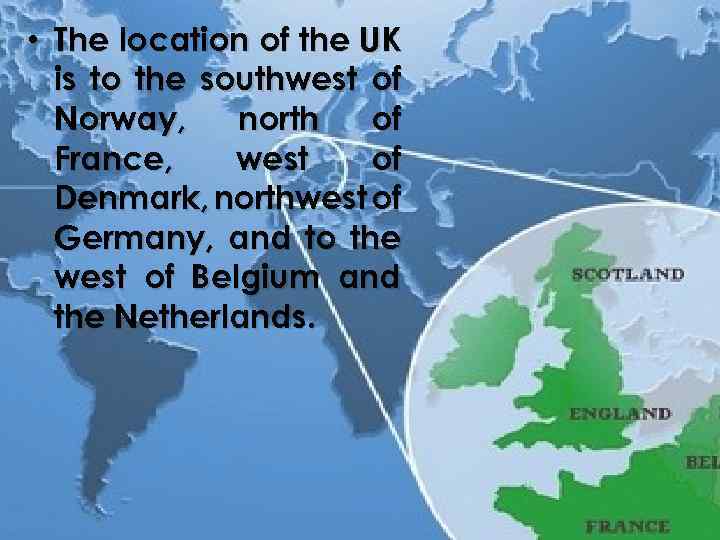 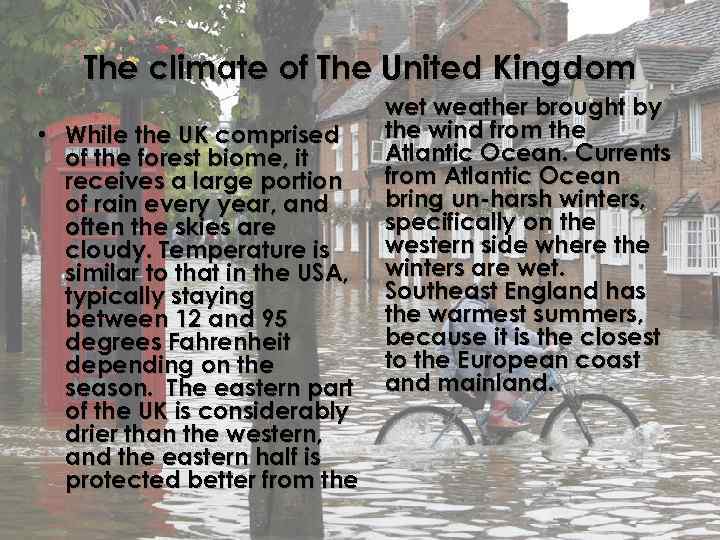 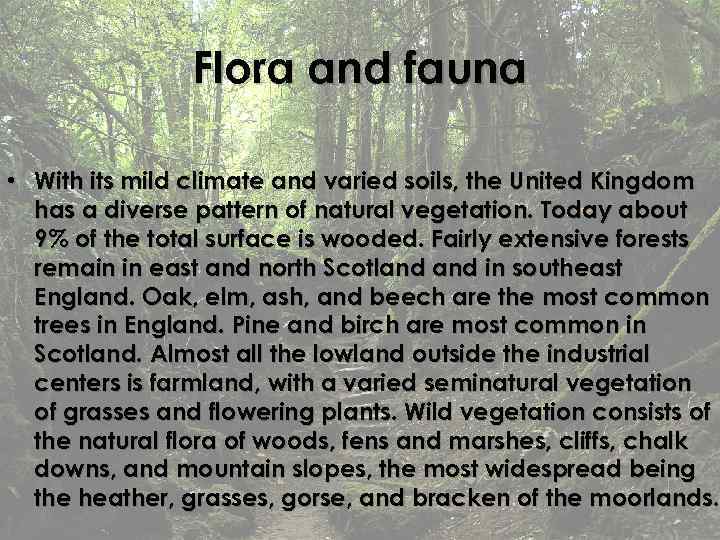 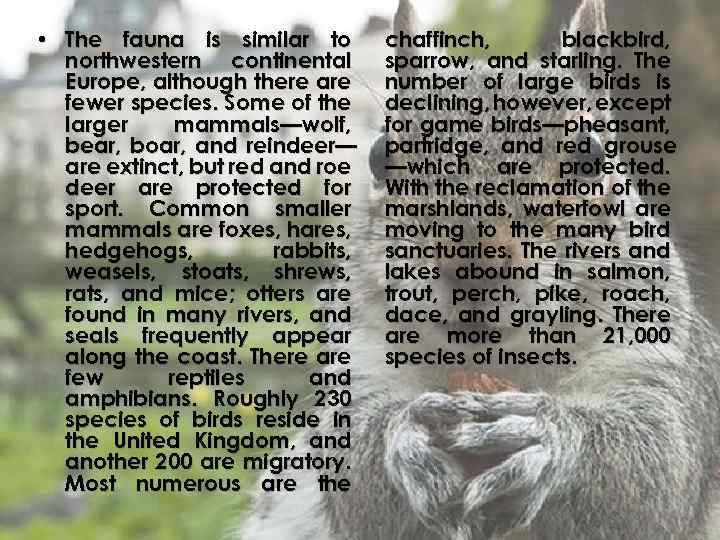 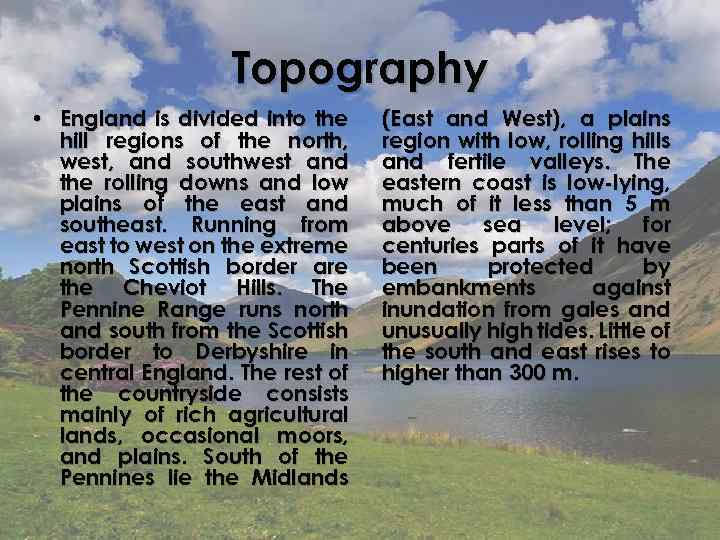 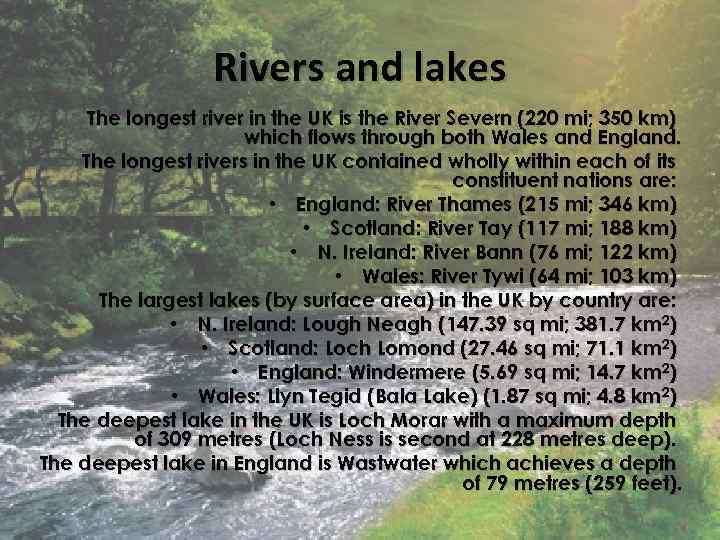 Скачать презентацию The United Kingdom The Location The

The Location. • The United Kingdom consists of a collection of islands which are located off the northwestern coast of Europe, and is bordered by Ireland, the Atlantic Ocean, Celtic Sea, Irish Sea, North Sea and English channel.

• The UK is in the northern hemisphere, however, the Prime Meridian splits the UK, making it half the eastern and half the western hemisphere.

• The location of the UK is to the southwest of Norway, north of France, west of Denmark, northwest of Germany, and to the west of Belgium and the Netherlands.

The climate of The United Kingdom • While the UK comprised of the forest biome, it receives a large portion of rain every year, and often the skies are cloudy. Temperature is similar to that in the USA, typically staying between 12 and 95 degrees Fahrenheit depending on the season. The eastern part of the UK is considerably drier than the western, and the eastern half is protected better from the wet weather brought by the wind from the Atlantic Ocean. Currents from Atlantic Ocean bring un-harsh winters, specifically on the western side where the winters are wet. Southeast England has the warmest summers, because it is the closest to the European coast and mainland.

Flora and fauna • With its mild climate and varied soils, the United Kingdom has a diverse pattern of natural vegetation. Today about 9% of the total surface is wooded. Fairly extensive forests remain in east and north Scotland in southeast England. Oak, elm, ash, and beech are the most common trees in England. Pine and birch are most common in Scotland. Almost all the lowland outside the industrial centers is farmland, with a varied seminatural vegetation of grasses and flowering plants. Wild vegetation consists of the natural flora of woods, fens and marshes, cliffs, chalk downs, and mountain slopes, the most widespread being the heather, grasses, gorse, and bracken of the moorlands.

• The fauna is similar to northwestern continental Europe, although there are fewer species. Some of the larger mammals—wolf, bear, boar, and reindeer— are extinct, but red and roe deer are protected for sport. Common smaller mammals are foxes, hares, hedgehogs, rabbits, weasels, stoats, shrews, rats, and mice; otters are found in many rivers, and seals frequently appear along the coast. There are few reptiles and amphibians. Roughly 230 species of birds reside in the United Kingdom, and another 200 are migratory. Most numerous are the chaffinch, blackbird, sparrow, and starling. The number of large birds is declining, however, except for game birds—pheasant, partridge, and red grouse —which are protected. With the reclamation of the marshlands, waterfowl are moving to the many bird sanctuaries. The rivers and lakes abound in salmon, trout, perch, pike, roach, dace, and grayling. There are more than 21, 000 species of insects.

Topography • England is divided into the hill regions of the north, west, and southwest and the rolling downs and low plains of the east and southeast. Running from east to west on the extreme north Scottish border are the Cheviot Hills. The Pennine Range runs north and south from the Scottish border to Derbyshire in central England. The rest of the countryside consists mainly of rich agricultural lands, occasional moors, and plains. South of the Pennines lie the Midlands (East and West), a plains region with low, rolling hills and fertile valleys. The eastern coast is low-lying, much of it less than 5 m above sea level; for centuries parts of it have been protected by embankments against inundation from gales and unusually high tides. Little of the south and east rises to higher than 300 m.

Constitution of the United Kingdom of Great Britain

Where are you from? A country report The