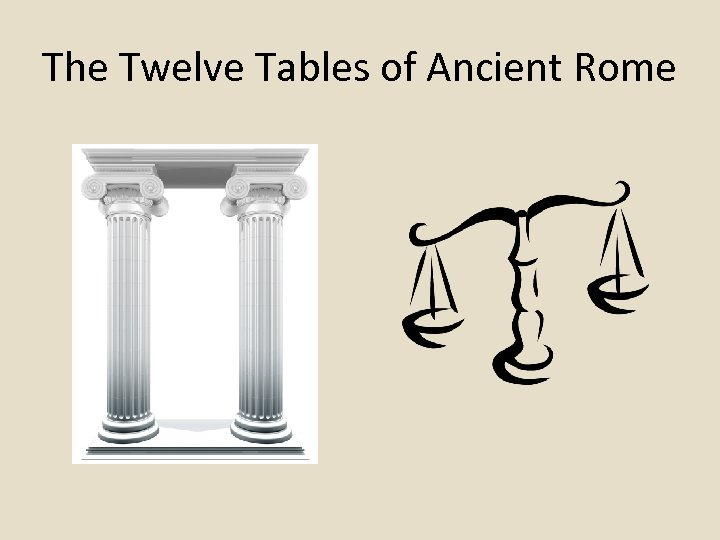 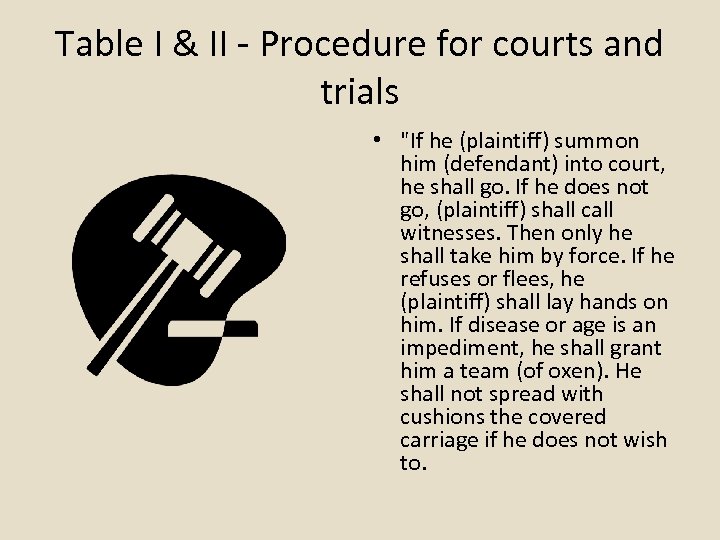 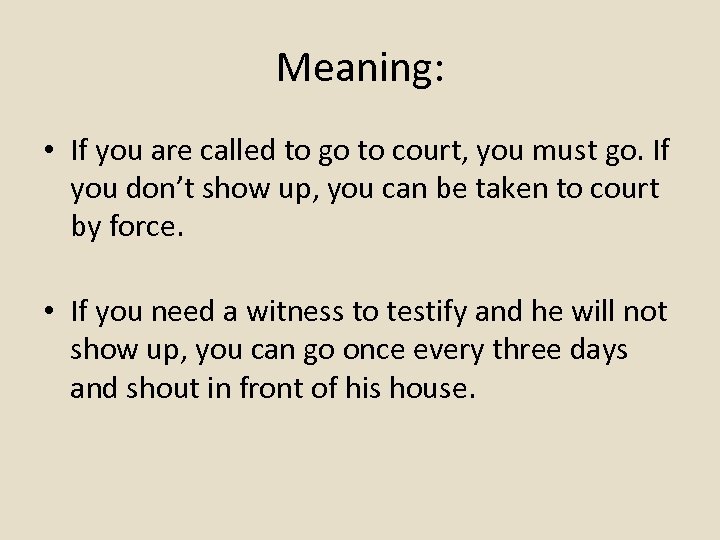 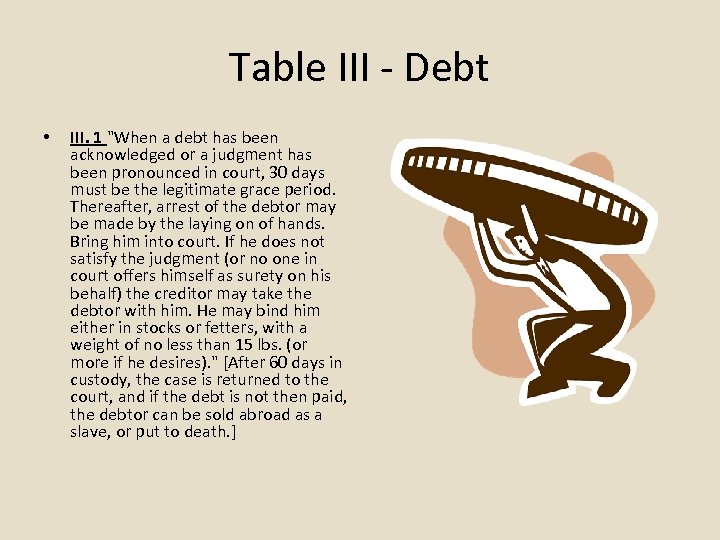 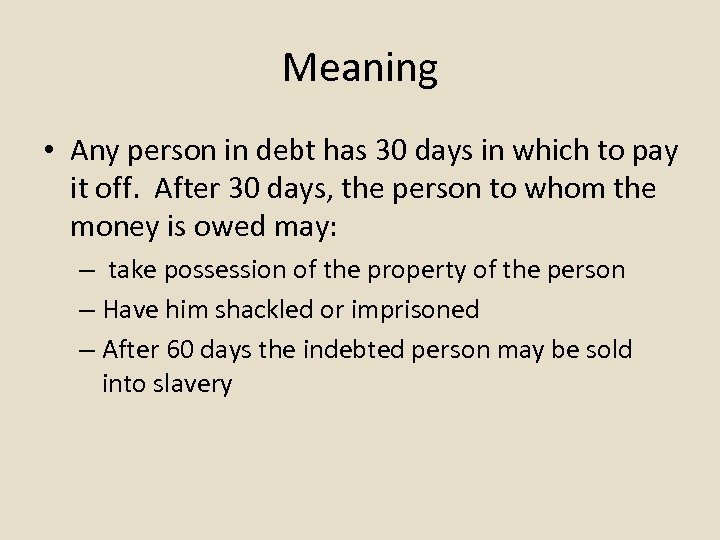 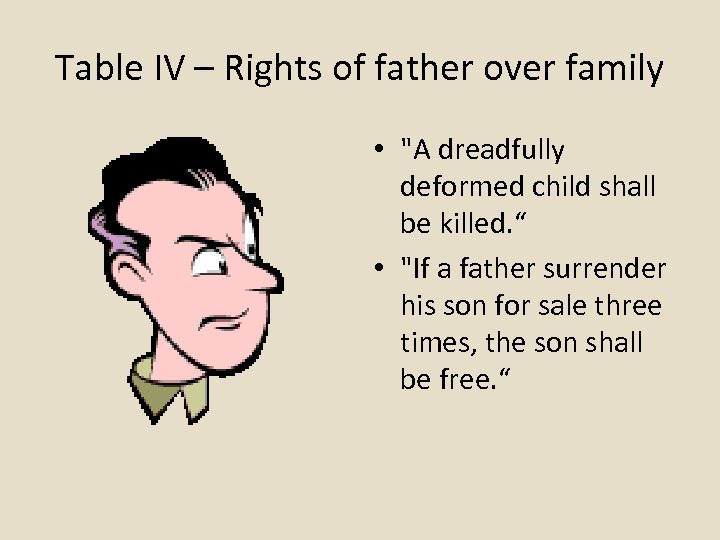 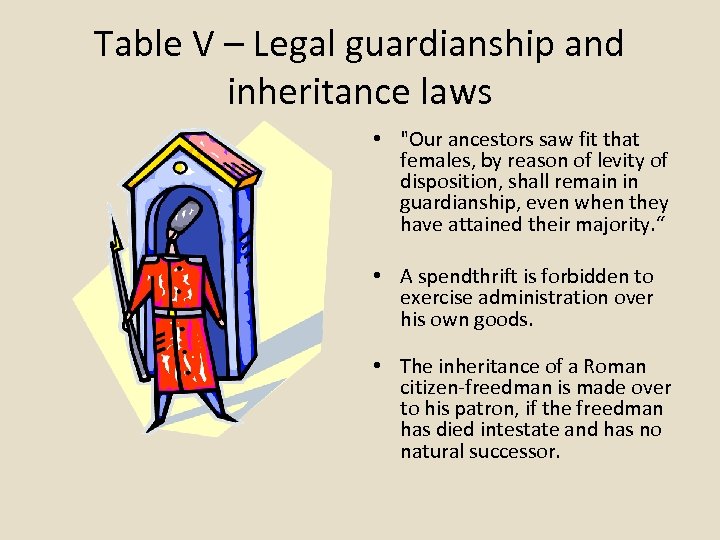 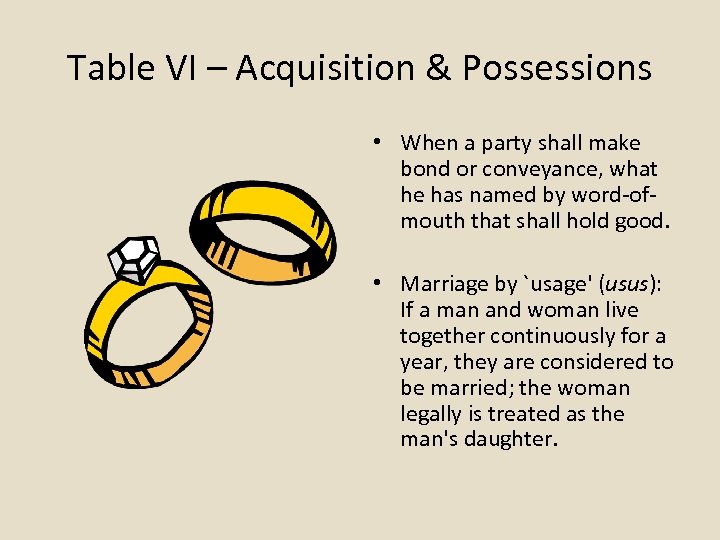 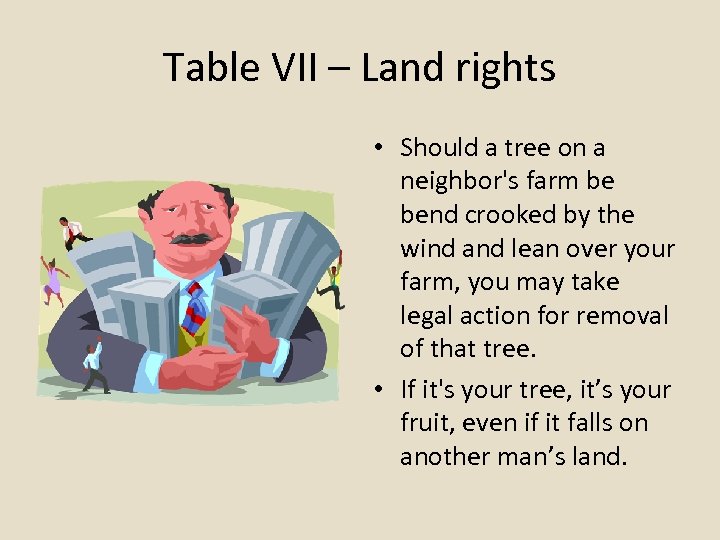 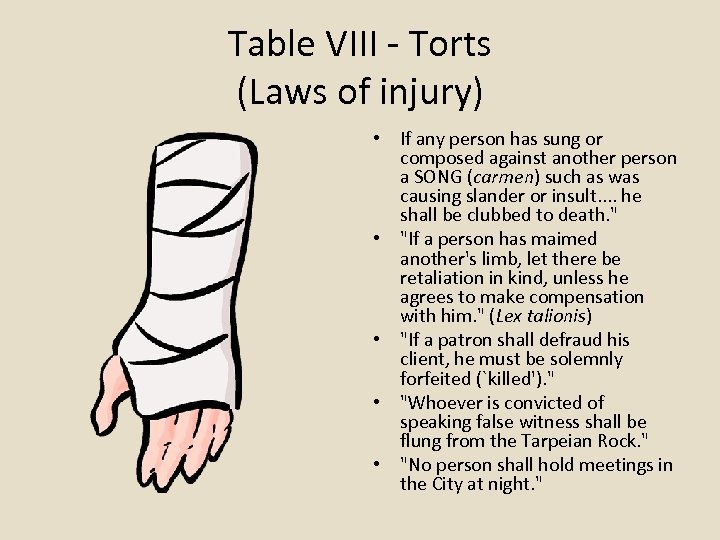 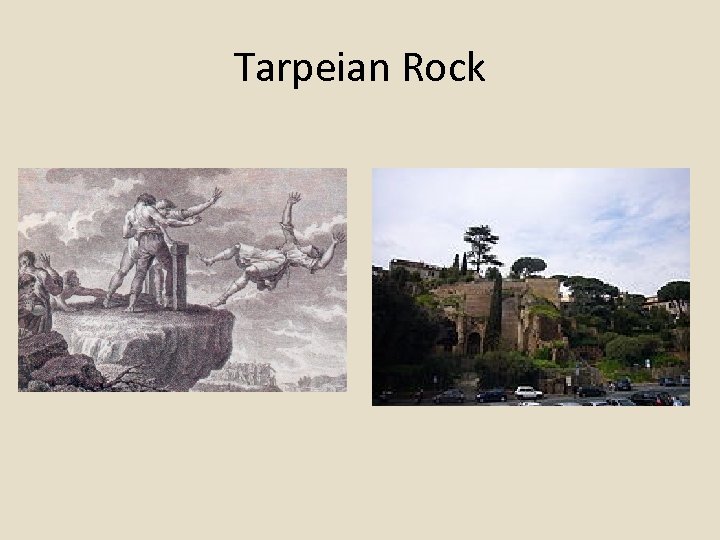 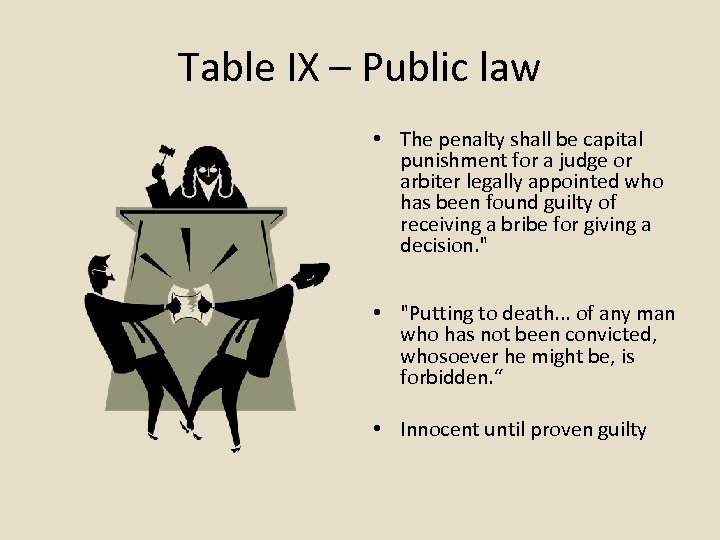 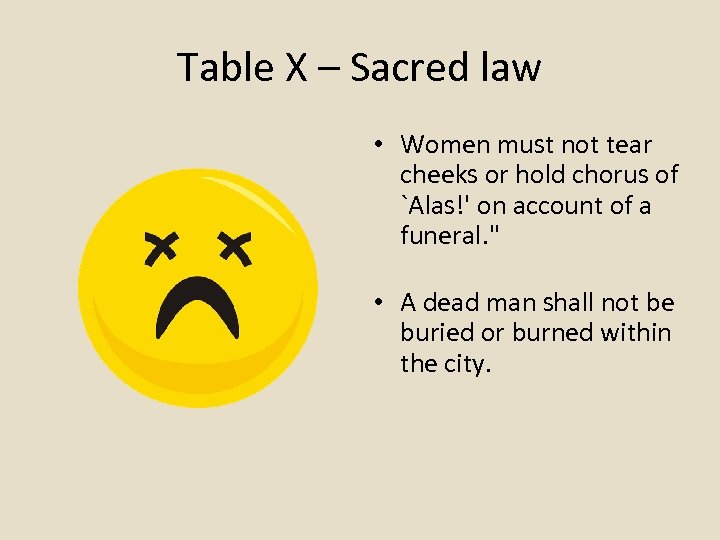 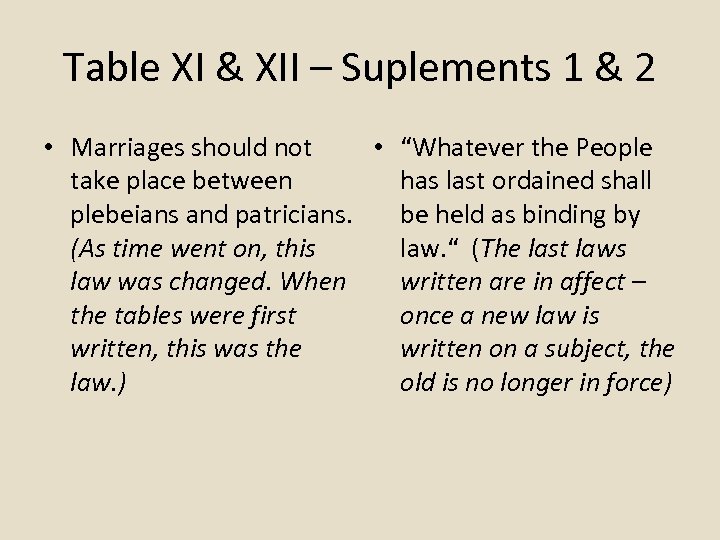 The Twelve Tables of Ancient Rome

Meaning: • If you are called to go to court, you must go. If you don’t show up, you can be taken to court by force. • If you need a witness to testify and he will not show up, you can go once every three days and shout in front of his house.

Table III - Debt • III. 1 "When a debt has been acknowledged or a judgment has been pronounced in court, 30 days must be the legitimate grace period. Thereafter, arrest of the debtor may be made by the laying on of hands. Bring him into court. If he does not satisfy the judgment (or no one in court offers himself as surety on his behalf) the creditor may take the debtor with him. He may bind him either in stocks or fetters, with a weight of no less than 15 lbs. (or more if he desires). " [After 60 days in custody, the case is returned to the court, and if the debt is not then paid, the debtor can be sold abroad as a slave, or put to death. ]

Meaning • Any person in debt has 30 days in which to pay it off. After 30 days, the person to whom the money is owed may: – take possession of the property of the person – Have him shackled or imprisoned – After 60 days the indebted person may be sold into slavery

Table IV – Rights of father over family • "A dreadfully deformed child shall be killed. “ • "If a father surrender his son for sale three times, the son shall be free. “

Table V – Legal guardianship and inheritance laws • "Our ancestors saw fit that females, by reason of levity of disposition, shall remain in guardianship, even when they have attained their majority. “ • A spendthrift is forbidden to exercise administration over his own goods. • The inheritance of a Roman citizen-freedman is made over to his patron, if the freedman has died intestate and has no natural successor.

Table VI – Acquisition & Possessions • When a party shall make bond or conveyance, what he has named by word-ofmouth that shall hold good. • Marriage by `usage' (usus): If a man and woman live together continuously for a year, they are considered to be married; the woman legally is treated as the man's daughter.

Table VII – Land rights • Should a tree on a neighbor's farm be bend crooked by the wind and lean over your farm, you may take legal action for removal of that tree. • If it's your tree, it’s your fruit, even if it falls on another man’s land.

Table VIII - Torts (Laws of injury) • If any person has sung or composed against another person a SONG (carmen) such as was causing slander or insult. . he shall be clubbed to death. " • "If a person has maimed another's limb, let there be retaliation in kind, unless he agrees to make compensation with him. " (Lex talionis) • "If a patron shall defraud his client, he must be solemnly forfeited (`killed'). " • "Whoever is convicted of speaking false witness shall be flung from the Tarpeian Rock. " • "No person shall hold meetings in the City at night. "

Table IX – Public law • The penalty shall be capital punishment for a judge or arbiter legally appointed who has been found guilty of receiving a bribe for giving a decision. " • "Putting to death. . . of any man who has not been convicted, whosoever he might be, is forbidden. “ • Innocent until proven guilty

Table X – Sacred law • Women must not tear cheeks or hold chorus of `Alas!' on account of a funeral. " • A dead man shall not be buried or burned within the city.

Table XI & XII – Suplements 1 & 2 • Marriages should not • “Whatever the People take place between has last ordained shall plebeians and patricians. be held as binding by (As time went on, this law. “ (The last laws law was changed. When written are in affect – the tables were first once a new law is written, this was the written on a subject, the law. ) old is no longer in force)

TYPES AND LEVELS OF EQUIVALENCE Lectures # 4