The Tudors in Ireland Part 1 The Fall 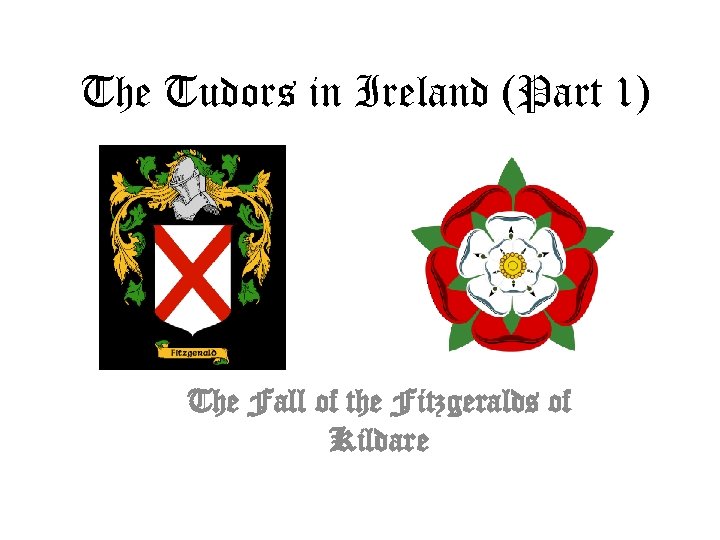 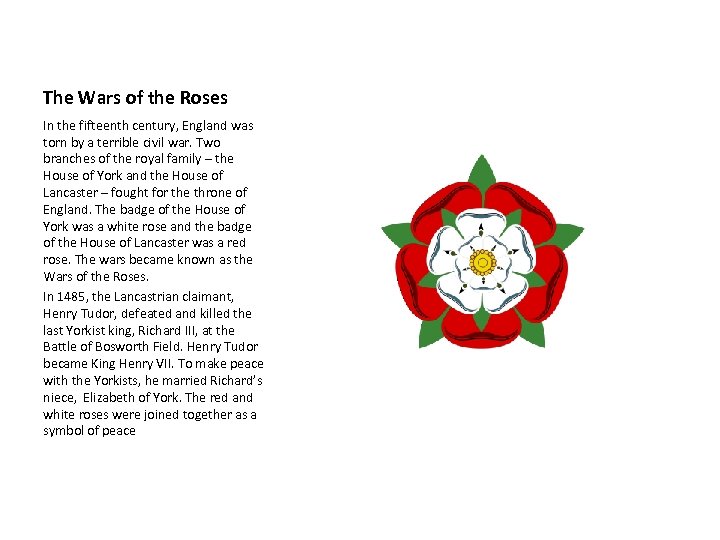 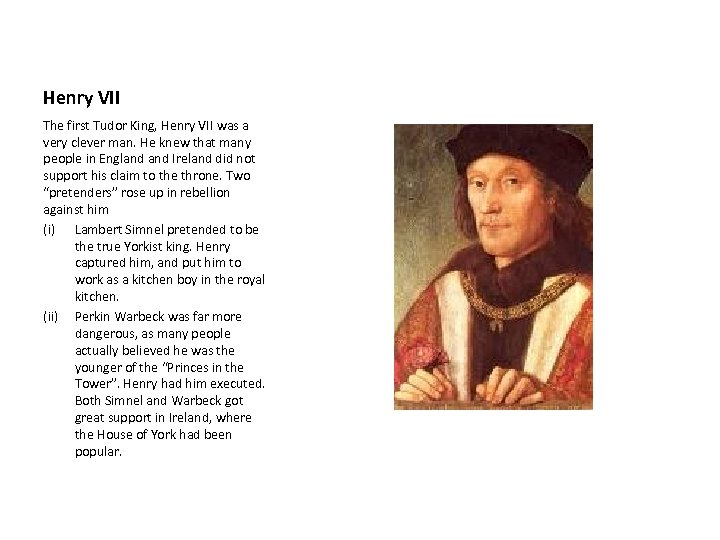 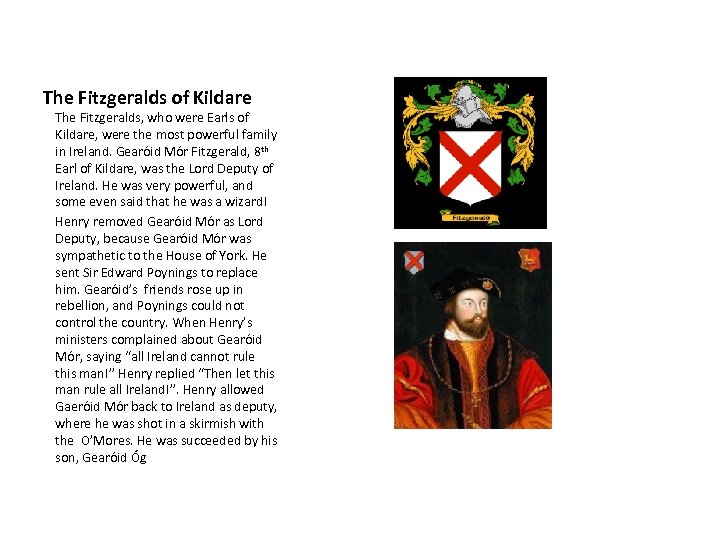 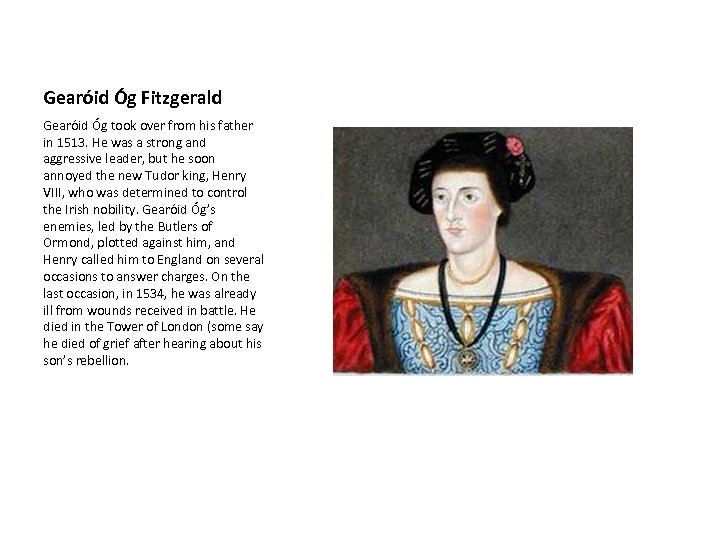 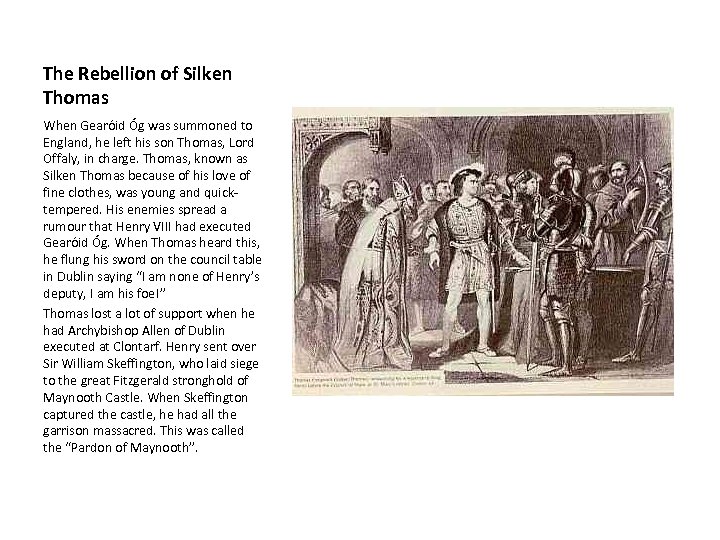 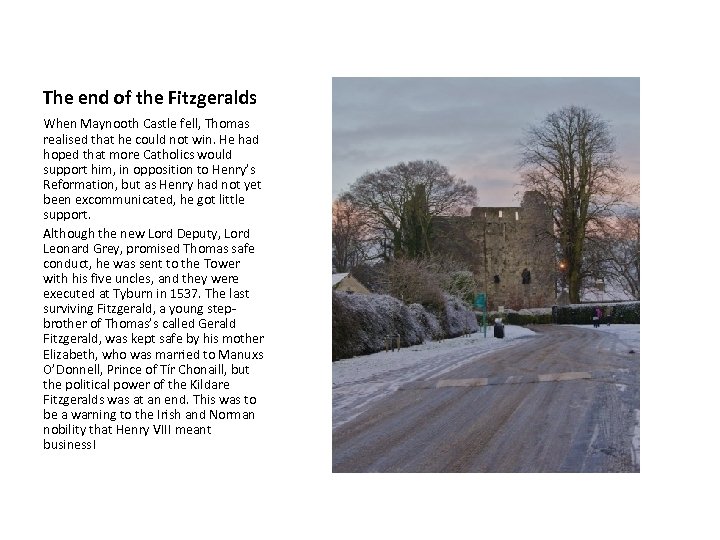 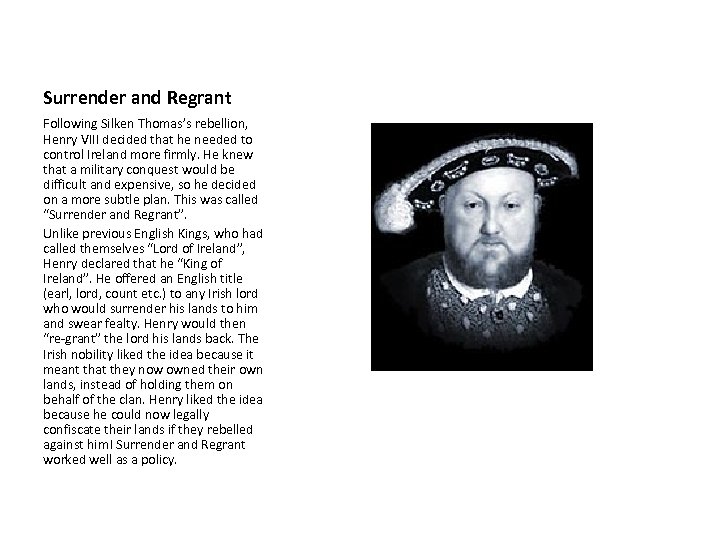 Скачать презентацию The Tudors in Ireland Part 1 The Fall

The Wars of the Roses In the fifteenth century, England was torn by a terrible civil war. Two branches of the royal family – the House of York and the House of Lancaster – fought for the throne of England. The badge of the House of York was a white rose and the badge of the House of Lancaster was a red rose. The wars became known as the Wars of the Roses. In 1485, the Lancastrian claimant, Henry Tudor, defeated and killed the last Yorkist king, Richard III, at the Battle of Bosworth Field. Henry Tudor became King Henry VII. To make peace with the Yorkists, he married Richard’s niece, Elizabeth of York. The red and white roses were joined together as a symbol of peace

Henry VII The first Tudor King, Henry VII was a very clever man. He knew that many people in England Ireland did not support his claim to the throne. Two “pretenders” rose up in rebellion against him (i) Lambert Simnel pretended to be the true Yorkist king. Henry captured him, and put him to work as a kitchen boy in the royal kitchen. (ii) Perkin Warbeck was far more dangerous, as many people actually believed he was the younger of the “Princes in the Tower”. Henry had him executed. Both Simnel and Warbeck got great support in Ireland, where the House of York had been popular.

The Fitzgeralds of Kildare The Fitzgeralds, who were Earls of Kildare, were the most powerful family in Ireland. Gearóid Mór Fitzgerald, 8 th Earl of Kildare, was the Lord Deputy of Ireland. He was very powerful, and some even said that he was a wizard! Henry removed Gearóid Mór as Lord Deputy, because Gearóid Mór was sympathetic to the House of York. He sent Sir Edward Poynings to replace him. Gearóid’s friends rose up in rebellion, and Poynings could not control the country. When Henry’s ministers complained about Gearóid Mór, saying “all Ireland cannot rule this man!” Henry replied “Then let this man rule all Ireland!”. Henry allowed Gaeróid Mór back to Ireland as deputy, where he was shot in a skirmish with the O’Mores. He was succeeded by his son, Gearóid Óg

Gearóid Óg Fitzgerald Gearóid Óg took over from his father in 1513. He was a strong and aggressive leader, but he soon annoyed the new Tudor king, Henry VIII, who was determined to control the Irish nobility. Gearóid Óg’s enemies, led by the Butlers of Ormond, plotted against him, and Henry called him to England on several occasions to answer charges. On the last occasion, in 1534, he was already ill from wounds received in battle. He died in the Tower of London (some say he died of grief after hearing about his son’s rebellion.

The Rebellion of Silken Thomas When Gearóid Óg was summoned to England, he left his son Thomas, Lord Offaly, in charge. Thomas, known as Silken Thomas because of his love of fine clothes, was young and quicktempered. His enemies spread a rumour that Henry VIII had executed Gearóid Óg. When Thomas heard this, he flung his sword on the council table in Dublin saying “I am none of Henry’s deputy, I am his foe!” Thomas lost a lot of support when he had Archybishop Allen of Dublin executed at Clontarf. Henry sent over Sir William Skeffington, who laid siege to the great Fitzgerald stronghold of Maynooth Castle. When Skeffington captured the castle, he had all the garrison massacred. This was called the “Pardon of Maynooth”.

The end of the Fitzgeralds When Maynooth Castle fell, Thomas realised that he could not win. He had hoped that more Catholics would support him, in opposition to Henry’s Reformation, but as Henry had not yet been excommunicated, he got little support. Although the new Lord Deputy, Lord Leonard Grey, promised Thomas safe conduct, he was sent to the Tower with his five uncles, and they were executed at Tyburn in 1537. The last surviving Fitzgerald, a young stepbrother of Thomas’s called Gerald Fitzgerald, was kept safe by his mother Elizabeth, who was married to Manuxs O’Donnell, Prince of Tír Chonaill, but the political power of the Kildare Fitzgeralds was at an end. This was to be a warning to the Irish and Norman nobility that Henry VIII meant business!

Surrender and Regrant Following Silken Thomas’s rebellion, Henry VIII decided that he needed to control Ireland more firmly. He knew that a military conquest would be difficult and expensive, so he decided on a more subtle plan. This was called “Surrender and Regrant”. Unlike previous English Kings, who had called themselves “Lord of Ireland”, Henry declared that he “King of Ireland”. He offered an English title (earl, lord, count etc. ) to any Irish lord who would surrender his lands to him and swear fealty. Henry would then “re-grant” the lord his lands back. The Irish nobility liked the idea because it meant that they now owned their own lands, instead of holding them on behalf of the clan. Henry liked the idea because he could now legally confiscate their lands if they rebelled against him! Surrender and Regrant worked well as a policy.