THE TUBE The Tube The Chronicles of 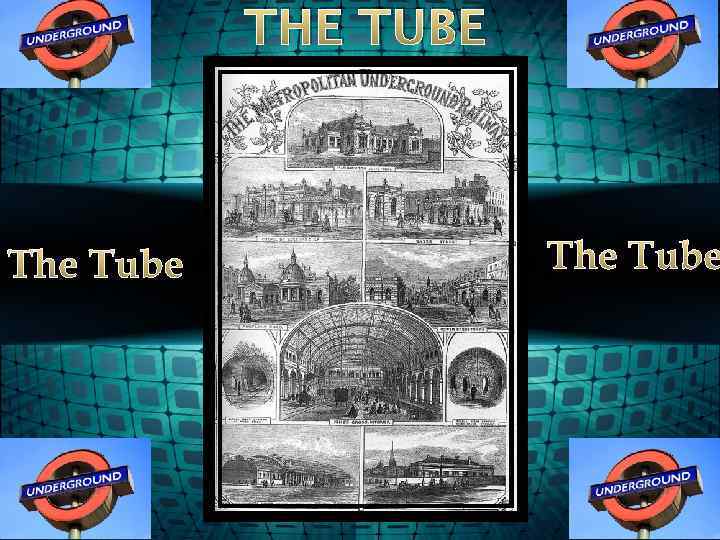 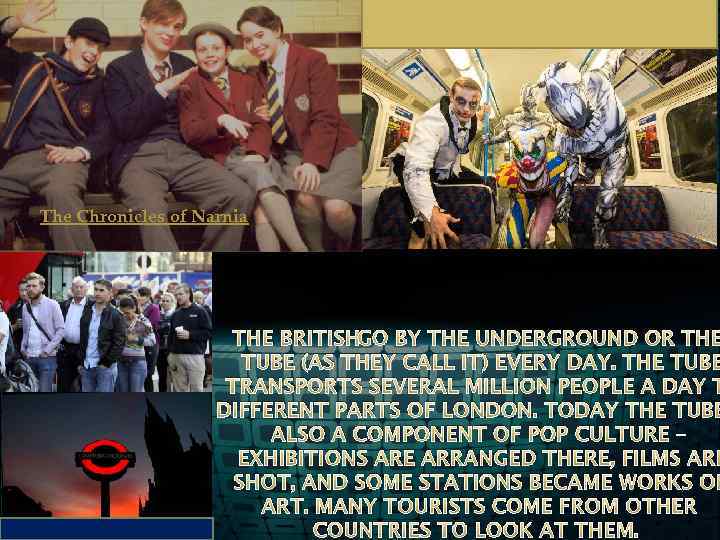 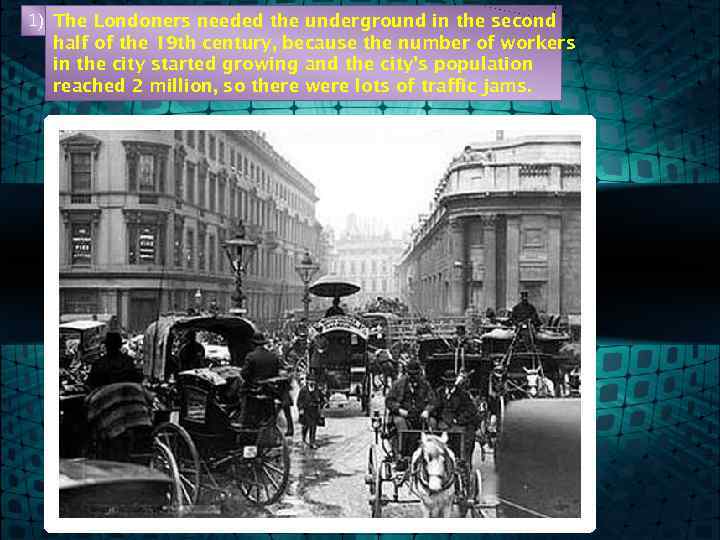 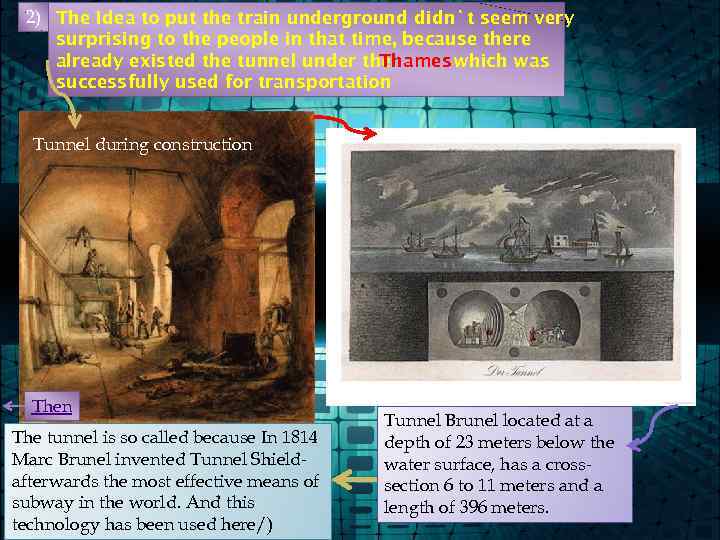 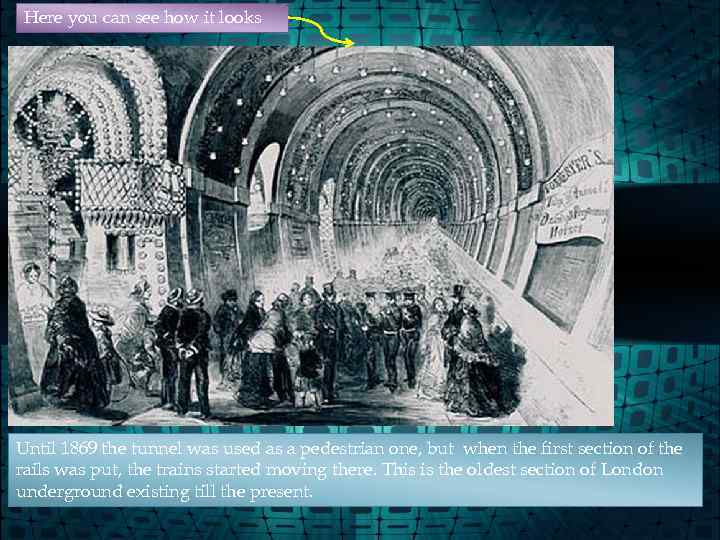 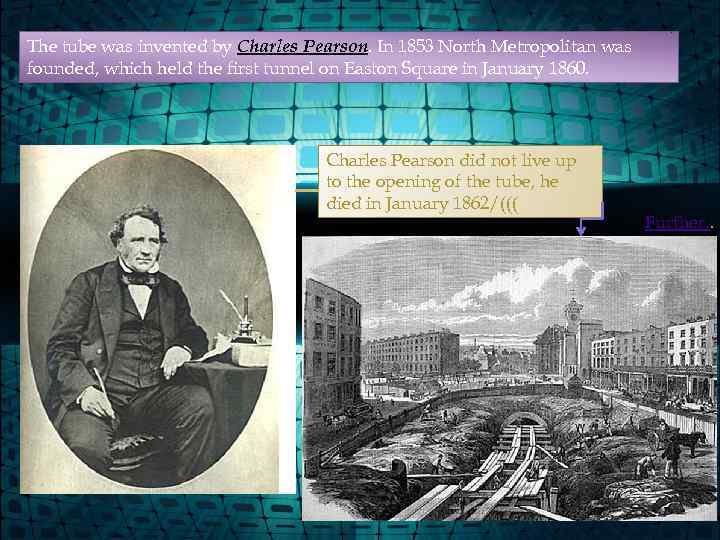 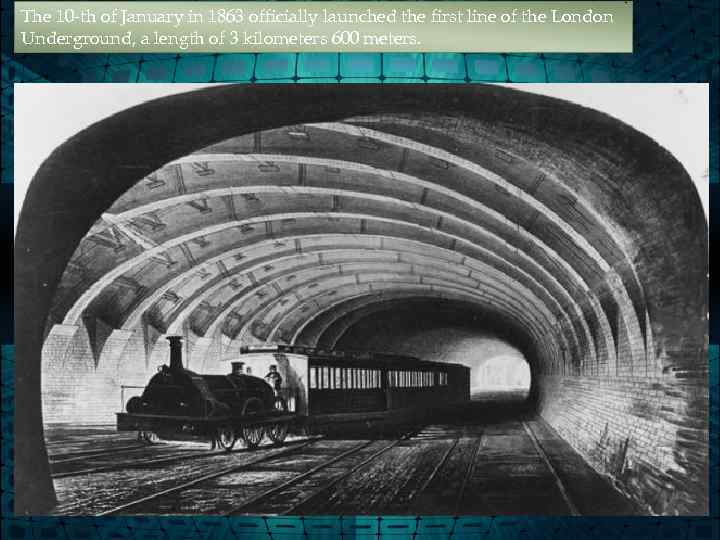 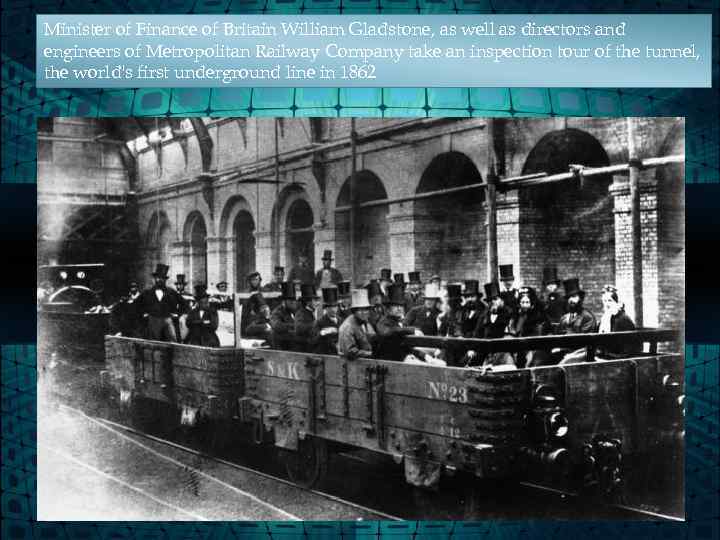 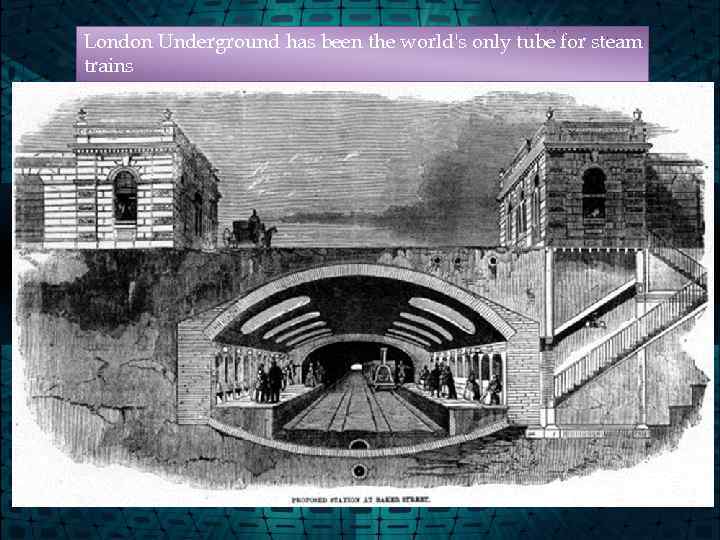 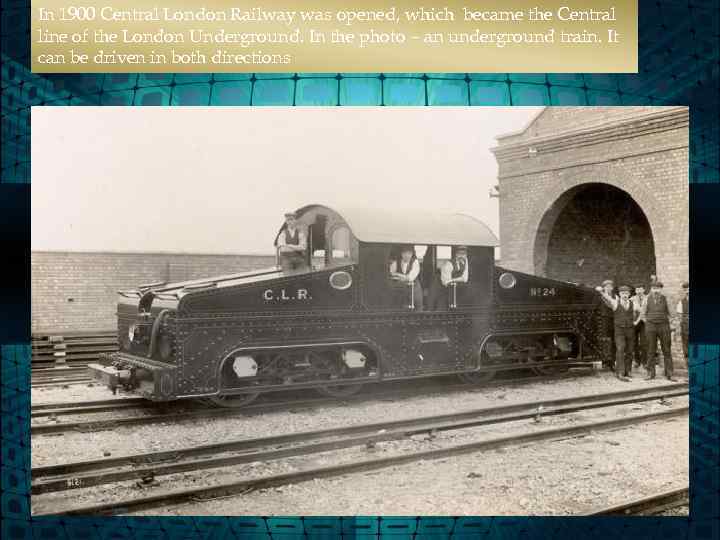 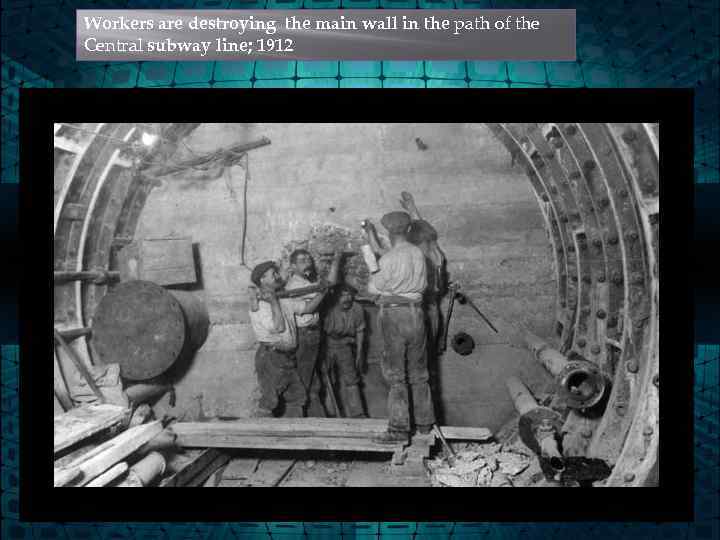 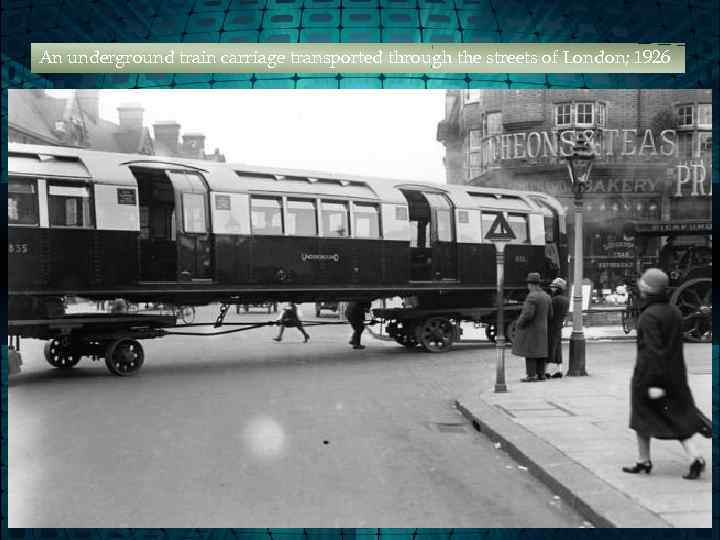 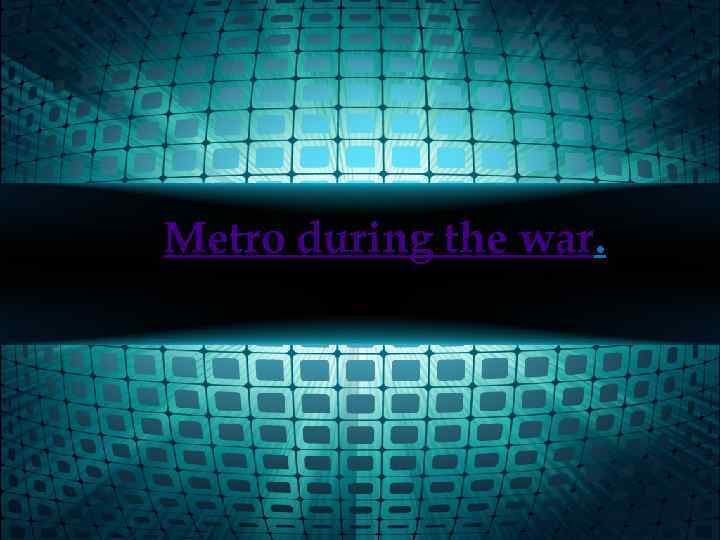 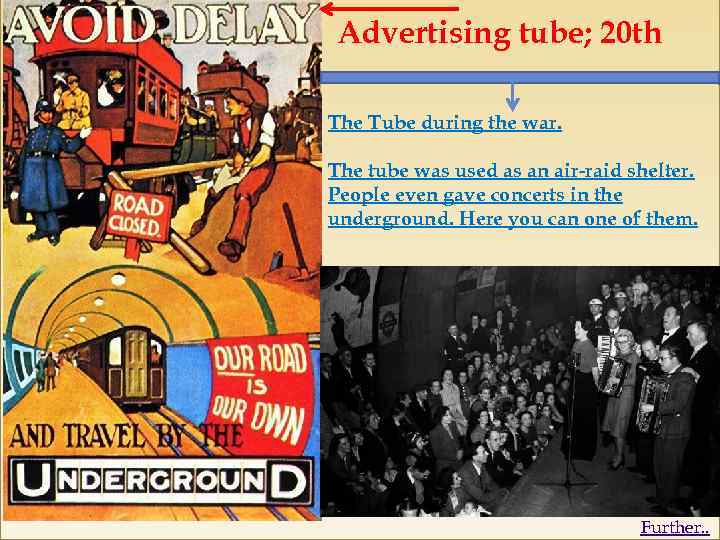 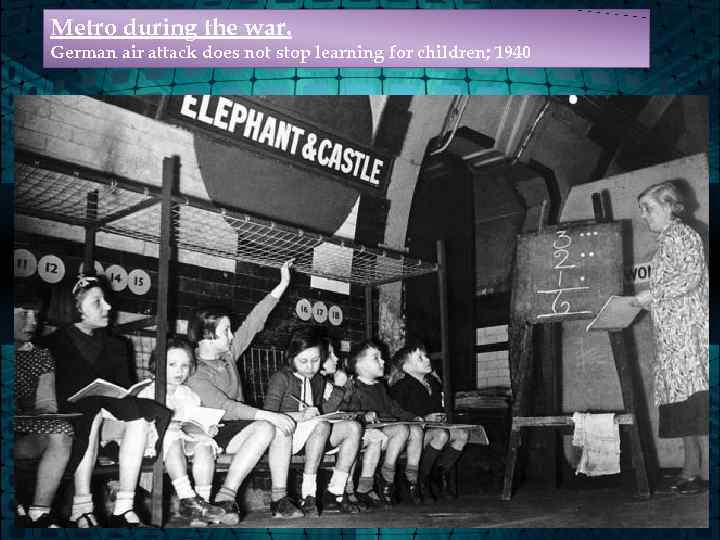 Скачать презентацию THE TUBE The Tube The Chronicles of

THE TUBE The Tube

The Chronicles of Narnia THE BRITISHGO BY THE UNDERGROUND OR THE TUBE (AS THEY CALL IT) EVERY DAY. THE TUBE TRANSPORTS SEVERAL MILLION PEOPLE A DAY T DIFFERENT PARTS OF LONDON. TODAY THE TUBE ALSO A COMPONENT OF POP CULTURE – EXHIBITIONS ARE ARRANGED THERE, FILMS ARE SHOT, AND SOME STATIONS BECAME WORKS OF ART. MANY TOURISTS COME FROM OTHER COUNTRIES TO LOOK AT THEM.

1) The Londoners needed the underground in the second half of the 19 th century, because the number of workers in the city started growing and the city's population reached 2 million, so there were lots of traffic jams.

2) The Idea to put the train underground didn`t seem very surprising to the people in that time, because there already existed the tunnel under the Thames which was successfully used for transportation. Tunnel during construction The tunnel is so called because In 1814 Marc Brunel invented Tunnel Shieldafterwards the most effective means of subway in the world. And this technology has been used here/) Tunnel Brunel located at a depth of 23 meters below the water surface, has a crosssection 6 to 11 meters and a length of 396 meters.

Here you can see how it looks Until 1869 the tunnel was used as a pedestrian one, but when the first section of the rails was put, the trains started moving there. This is the oldest section of London underground existing till the present.

The 10 -th of January in 1863 officially launched the first line of the London Underground, a length of 3 kilometers 600 meters.

Minister of Finance of Britain William Gladstone, as well as directors and engineers of Metropolitan Railway Company take an inspection tour of the tunnel, the world's first underground line in 1862

London Underground has been the world's only tube for steam trains

In 1900 Central London Railway was opened, which became the Central line of the London Underground. In the photo – an underground train. It can be driven in both directions

Workers are destroying the main wall in the path of the Central subway line; 1912

An underground train carriage transported through the streets of London; 1926

Metro during the war.

Advertising tube; 20 th The Tube during the war. The tube was used as an air-raid shelter. People even gave concerts in the underground. Here you can one of them. Further. .

Metro during the war. German air attack does not stop learning for children; 1940

This is no ordinary escalator. This is the entrance to an underground aircraft factory, located in one of the subway stations; 1943. (Это не обычный эскалатор, как вы подумали, это вход на подземный авиазавод, расположенный на одной из станций метрополитена; 1943).

THE TUBE THE HISTORY OF LONDON TUBE

Concept about nervous system. Principles of the organization