The Three Branches of the Canadian Federal Government 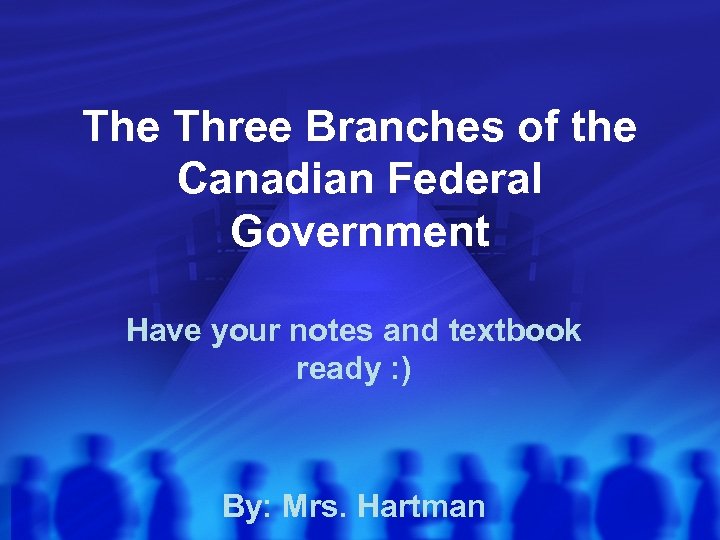 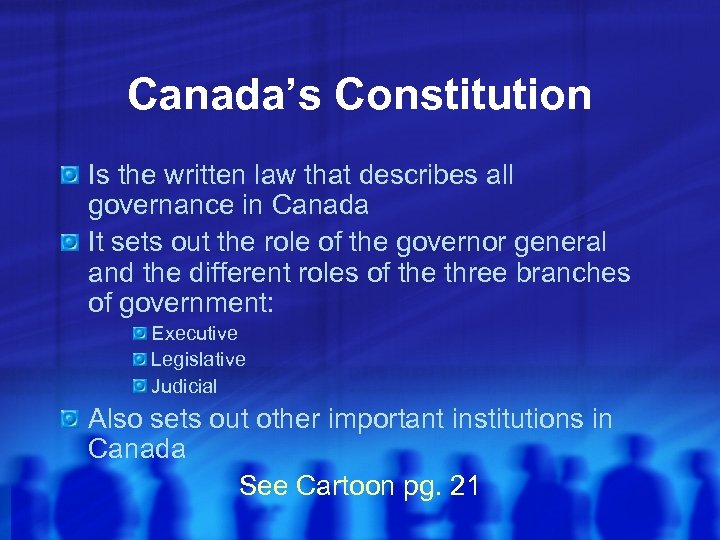 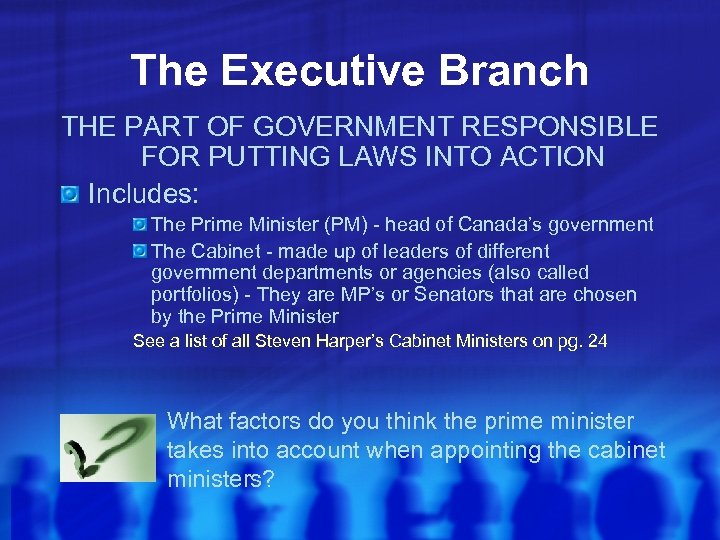 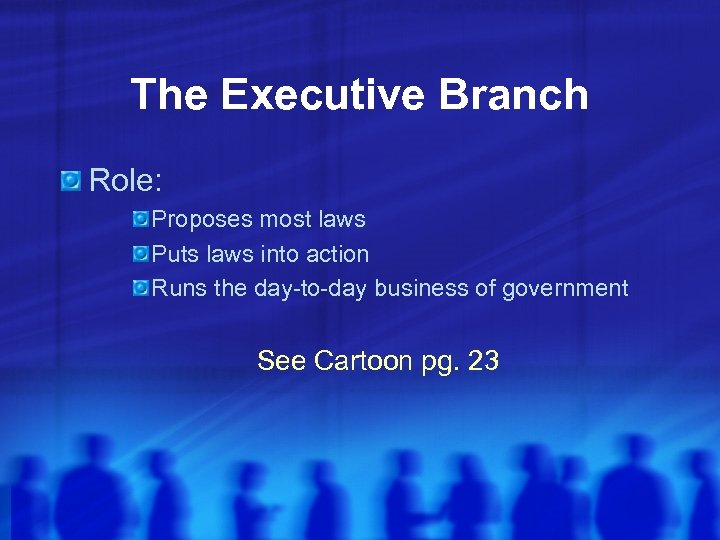 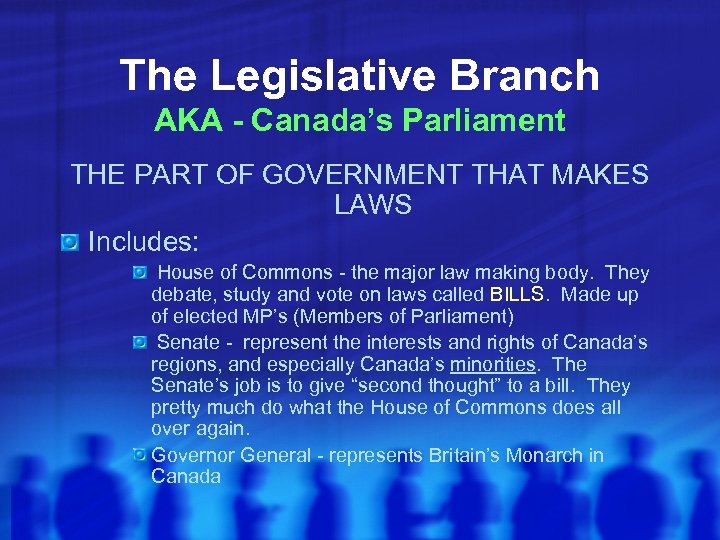 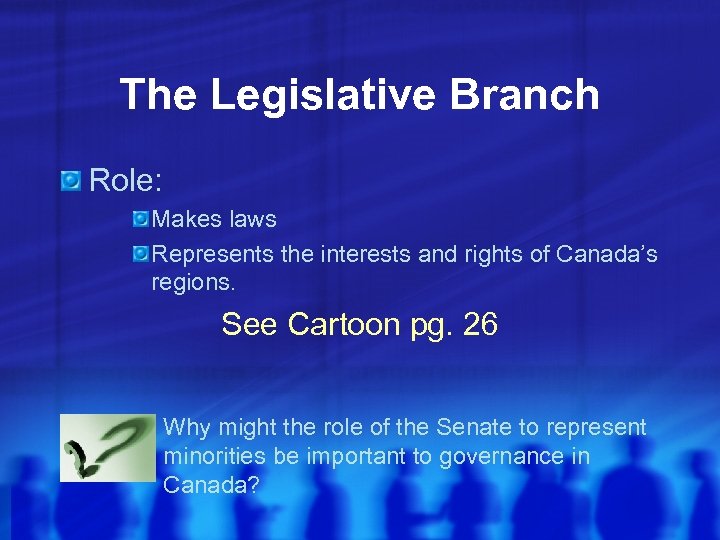 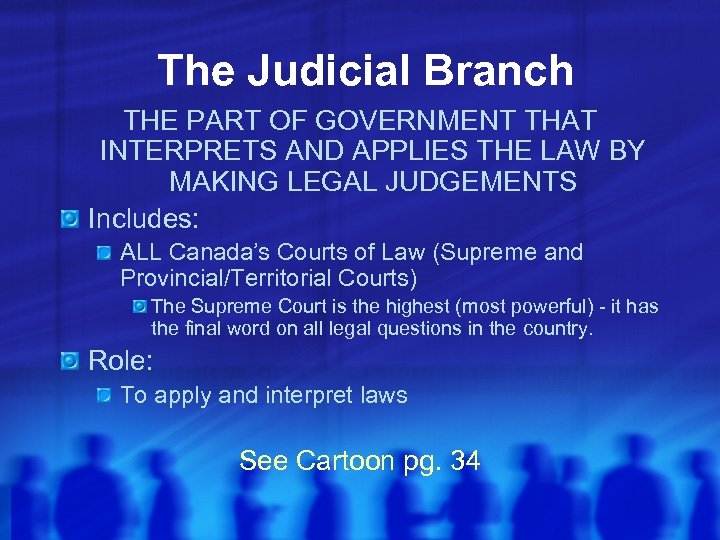 Скачать презентацию The Three Branches of the Canadian Federal Government

The Three Branches of the Canadian Federal Government Have your notes and textbook ready : ) By: Mrs. Hartman

Canada’s Constitution Is the written law that describes all governance in Canada It sets out the role of the governor general and the different roles of the three branches of government: Executive Legislative Judicial Also sets out other important institutions in Canada See Cartoon pg. 21

The Executive Branch THE PART OF GOVERNMENT RESPONSIBLE FOR PUTTING LAWS INTO ACTION Includes: The Prime Minister (PM) - head of Canada’s government The Cabinet - made up of leaders of different government departments or agencies (also called portfolios) - They are MP’s or Senators that are chosen by the Prime Minister See a list of all Steven Harper’s Cabinet Ministers on pg. 24 What factors do you think the prime minister takes into account when appointing the cabinet ministers?

The Legislative Branch AKA - Canada’s Parliament THE PART OF GOVERNMENT THAT MAKES LAWS Includes: House of Commons - the major law making body. They debate, study and vote on laws called BILLS. Made up of elected MP’s (Members of Parliament) Senate - represent the interests and rights of Canada’s regions, and especially Canada’s minorities. The Senate’s job is to give “second thought” to a bill. They pretty much do what the House of Commons does all over again. Governor General - represents Britain’s Monarch in Canada

The Legislative Branch Role: Makes laws Represents the interests and rights of Canada’s regions. See Cartoon pg. 26 Why might the role of the Senate to represent minorities be important to governance in Canada?

The Judicial Branch THE PART OF GOVERNMENT THAT INTERPRETS AND APPLIES THE LAW BY MAKING LEGAL JUDGEMENTS Includes: ALL Canada’s Courts of Law (Supreme and Provincial/Territorial Courts) The Supreme Court is the highest (most powerful) - it has the final word on all legal questions in the country. Role: To apply and interpret laws See Cartoon pg. 34