THE SUN The Sun is a British 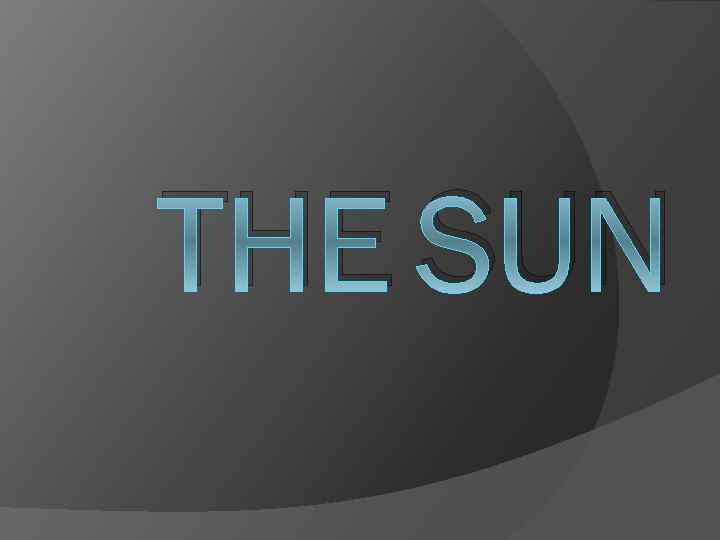 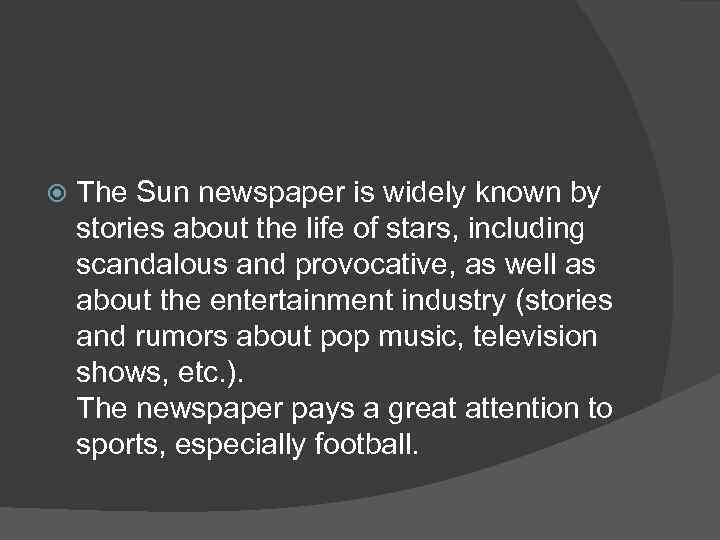 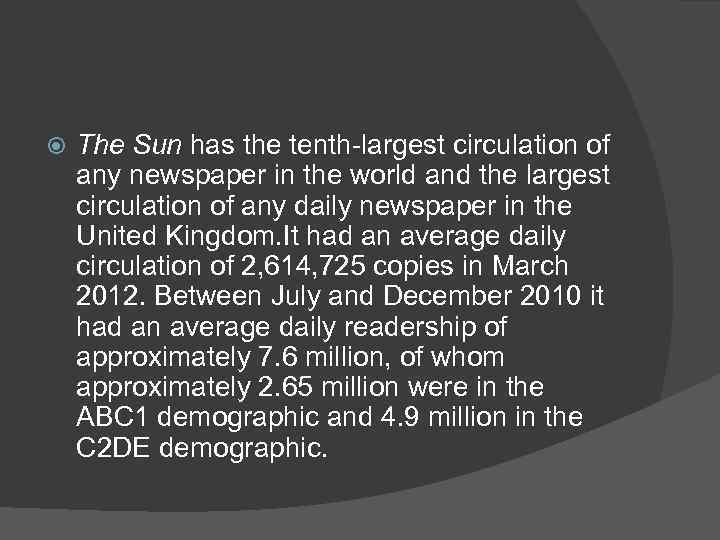 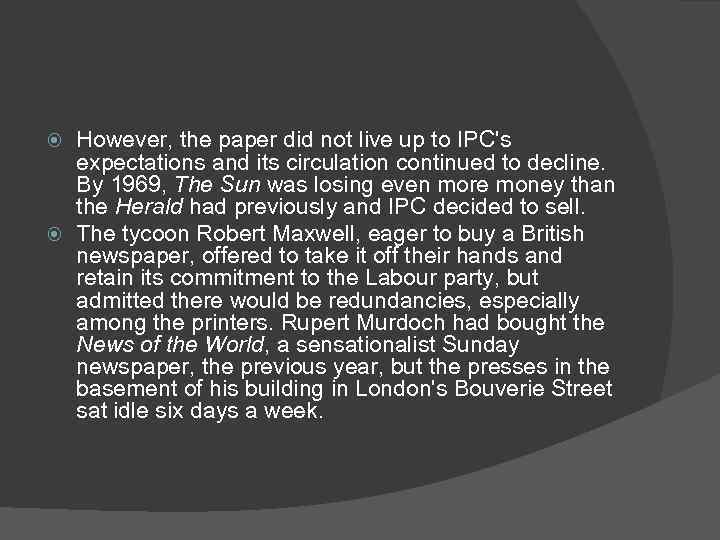 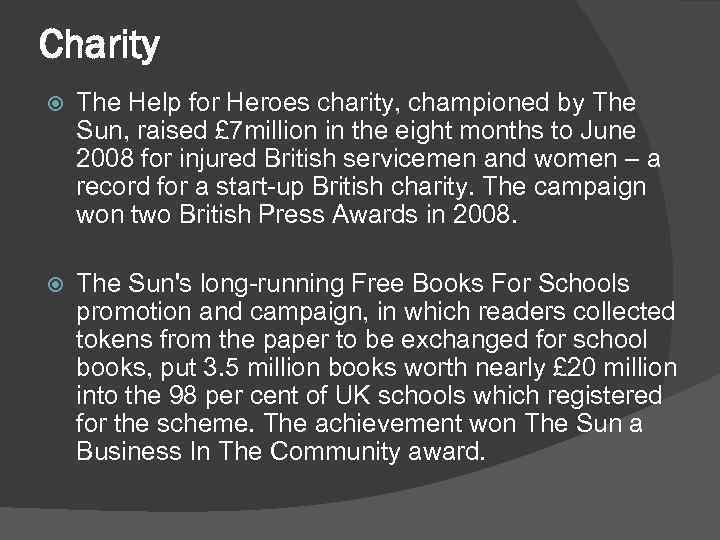 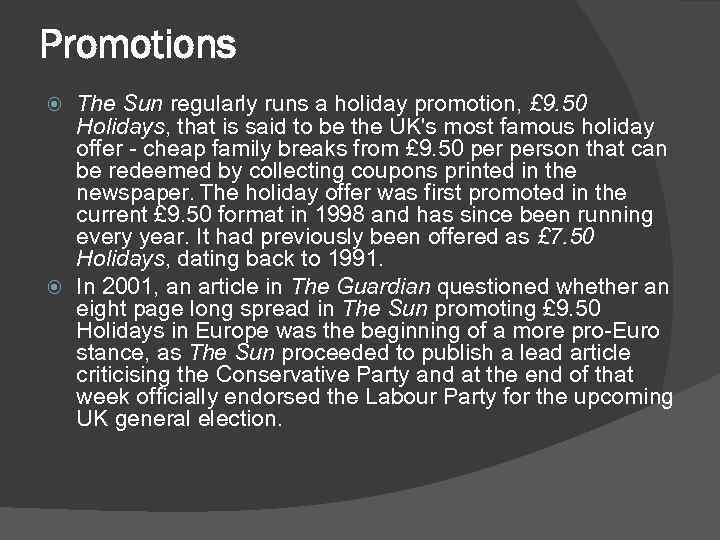 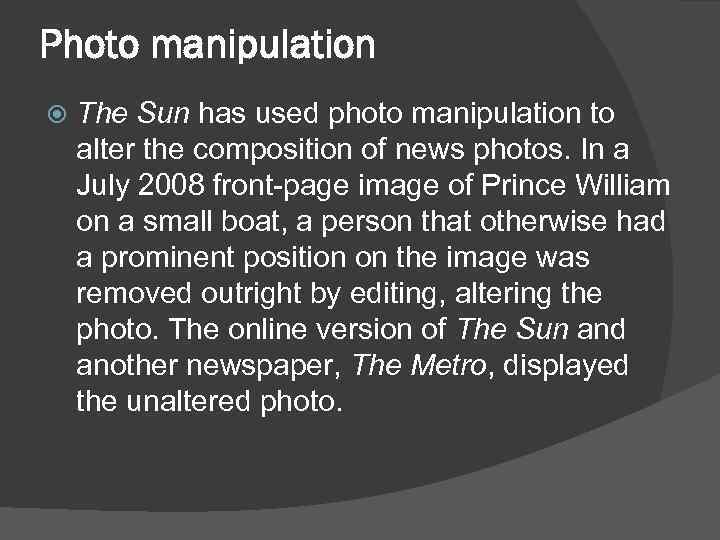 Скачать презентацию THE SUN The Sun is a British

The Sun is a British tabloid, founded in 1963. The circulation of the newspaper as of June 2011 is 2 806 746 copies. Published in the UK and Ireland. On the average in day newspaper reads about 7. 7 million people, of whom 56 per cent were men and 44 % women. Belongs to the media holding News Corporation.

The Sun newspaper is widely known by stories about the life of stars, including scandalous and provocative, as well as about the entertainment industry (stories and rumors about pop music, television shows, etc. ). The newspaper pays a great attention to sports, especially football.

History The Sun was first published as a broadsheet on 15 September 1964 – with a logo featuring a glowing orange disc. It was launched by owners IPC (International Publishing Corporation) to replace the failing Daily Herald. The new paper was intended to add a readership of 'social radicals' to the Herald's 'political radicals'. According to The Times, the brash new paper 'burst forth with tremendous energy'. Launching with a readership of 3. 5 m, the large initial print run was pinned down to 'curiosity' and the 'advantage of novelty'.

However, the paper did not live up to IPC's expectations and its circulation continued to decline. By 1969, The Sun was losing even more money than the Herald had previously and IPC decided to sell. The tycoon Robert Maxwell, eager to buy a British newspaper, offered to take it off their hands and retain its commitment to the Labour party, but admitted there would be redundancies, especially among the printers. Rupert Murdoch had bought the News of the World, a sensationalist Sunday newspaper, the previous year, but the presses in the basement of his building in London's Bouverie Street sat idle six days a week.

Charity The Help for Heroes charity, championed by The Sun, raised £ 7 million in the eight months to June 2008 for injured British servicemen and women – a record for a start-up British charity. The campaign won two British Press Awards in 2008. The Sun's long-running Free Books For Schools promotion and campaign, in which readers collected tokens from the paper to be exchanged for school books, put 3. 5 million books worth nearly £ 20 million into the 98 per cent of UK schools which registered for the scheme. The achievement won The Sun a Business In The Community award.

Promotions The Sun regularly runs a holiday promotion, £ 9. 50 Holidays, that is said to be the UK's most famous holiday offer - cheap family breaks from £ 9. 50 person that can be redeemed by collecting coupons printed in the newspaper. The holiday offer was first promoted in the current £ 9. 50 format in 1998 and has since been running every year. It had previously been offered as £ 7. 50 Holidays, dating back to 1991. In 2001, an article in The Guardian questioned whether an eight page long spread in The Sun promoting £ 9. 50 Holidays in Europe was the beginning of a more pro-Euro stance, as The Sun proceeded to publish a lead article criticising the Conservative Party and at the end of that week officially endorsed the Labour Party for the upcoming UK general election.

Photo manipulation The Sun has used photo manipulation to alter the composition of news photos. In a July 2008 front-page image of Prince William on a small boat, a person that otherwise had a prominent position on the image was removed outright by editing, altering the photo. The online version of The Sun and another newspaper, The Metro, displayed the unaltered photo.

Arrests A reporter working for The Sun was arrested and taken to a south-west London police station on 4 November 2011. The man is the sixth person to be arrested in the UK under the News International related legal probe, Operation Elveden. In January 2012, two current and two former employees were arrested.

Māori myths are set in the past and

Political System in the UK The Parties

Variants of the English Language Lecture 15