The Summer of The Swans Author Betsy Byars 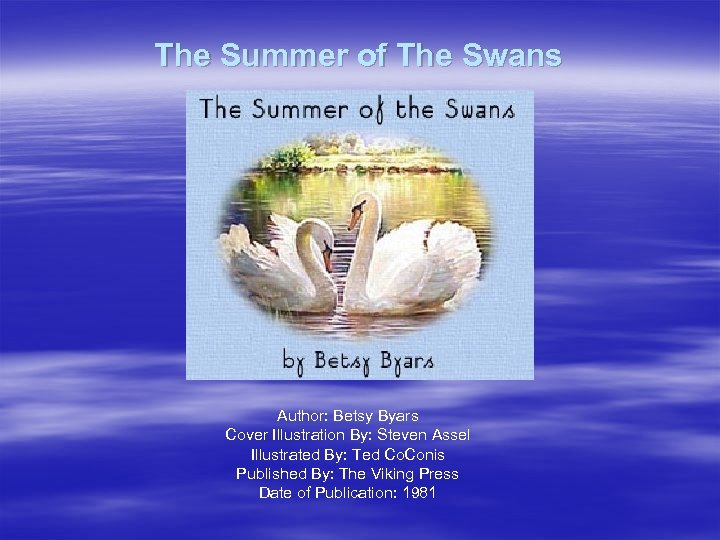 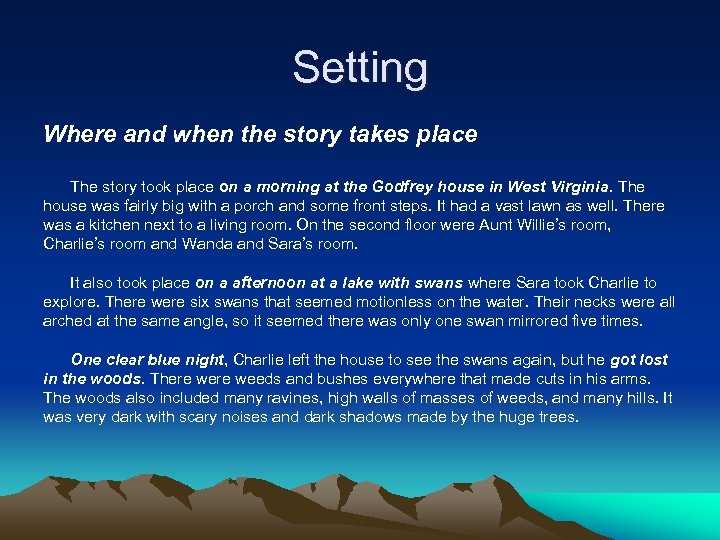 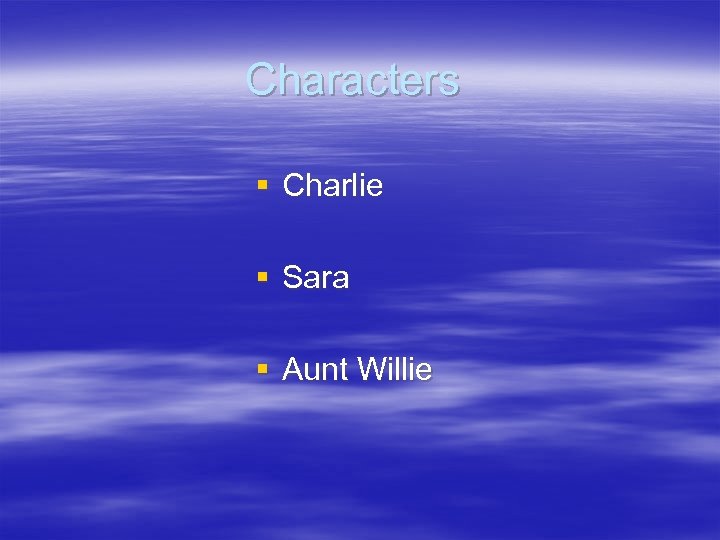 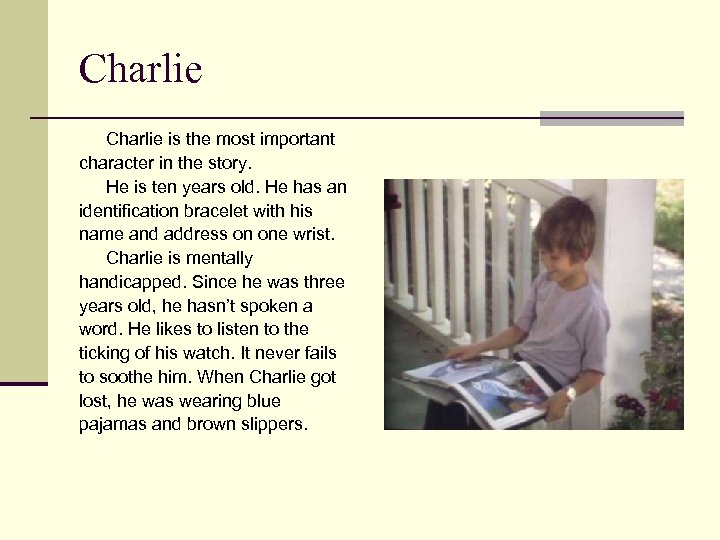 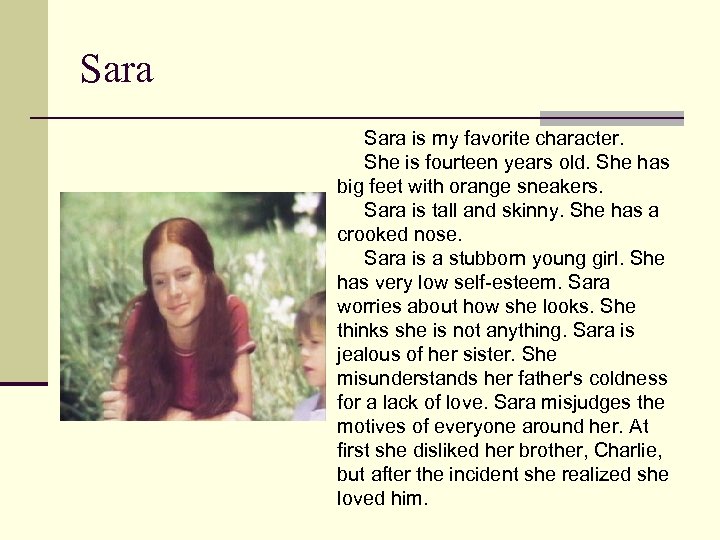 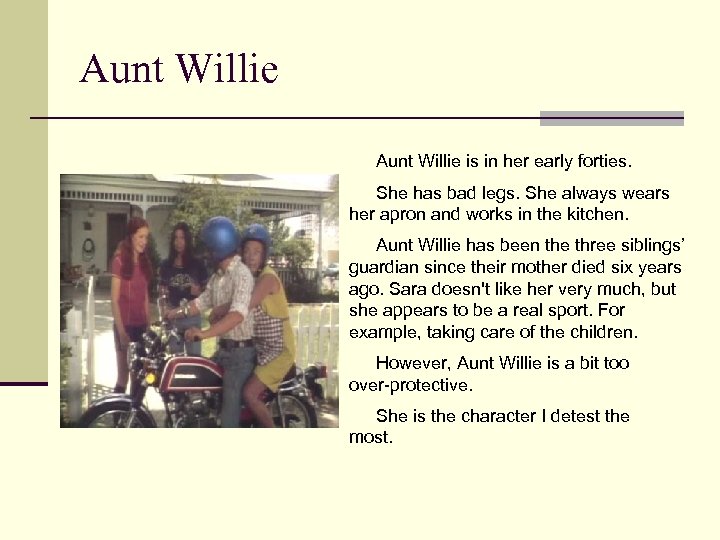 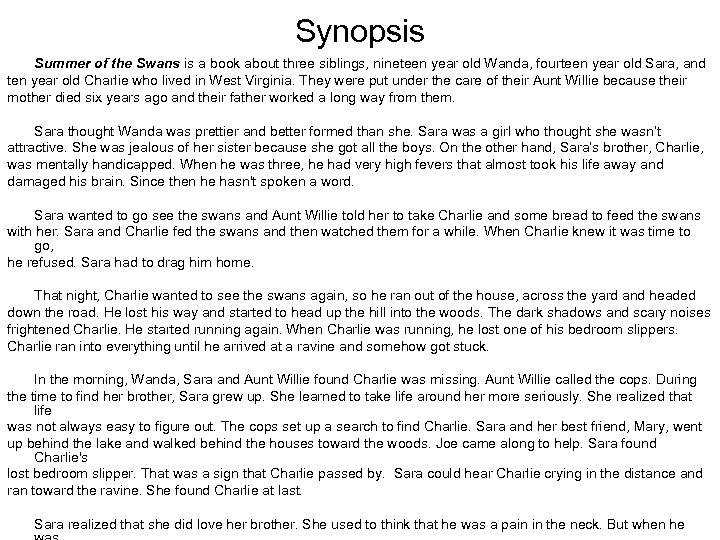 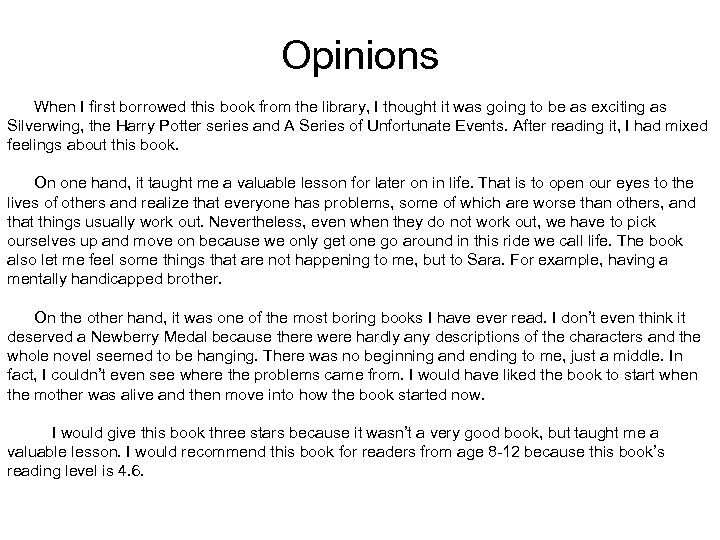 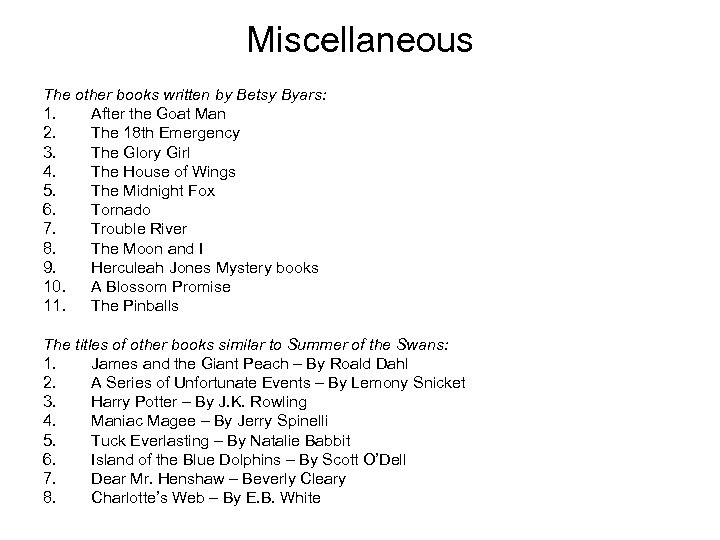 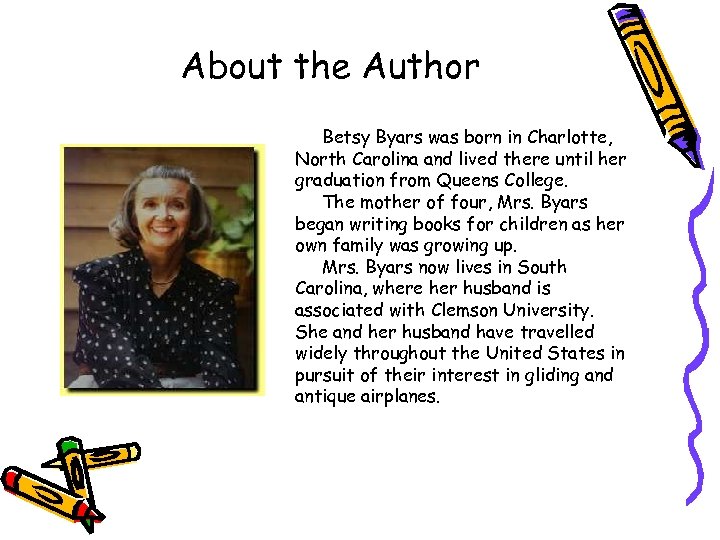 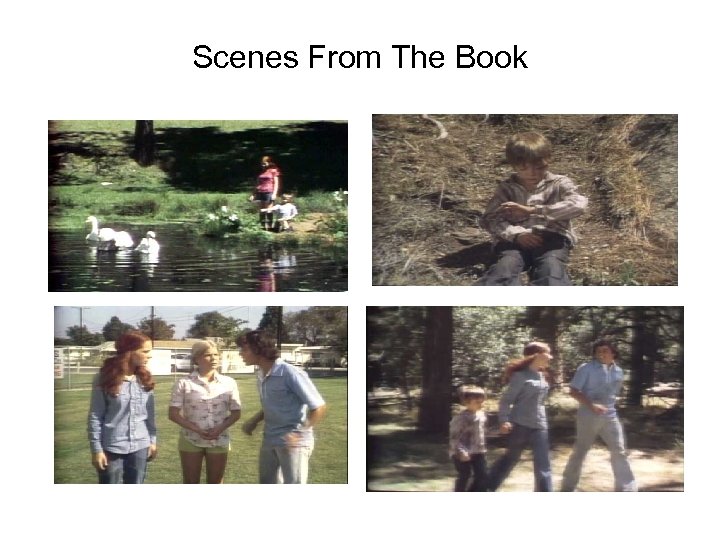 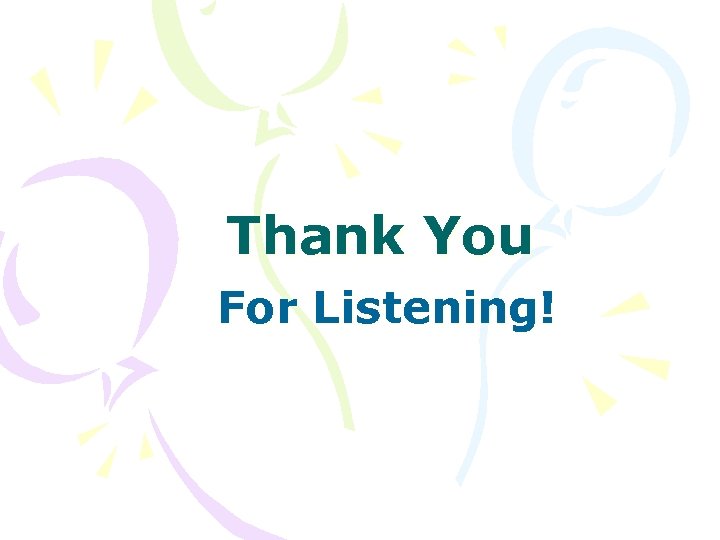 Скачать презентацию The Summer of The Swans Author Betsy Byars

The Summer of The Swans Author: Betsy Byars Cover Illustration By: Steven Assel Illustrated By: Ted Co. Conis Published By: The Viking Press Date of Publication: 1981

Setting Where and when the story takes place The story took place on a morning at the Godfrey house in West Virginia. The house was fairly big with a porch and some front steps. It had a vast lawn as well. There was a kitchen next to a living room. On the second floor were Aunt Willie’s room, Charlie’s room and Wanda and Sara’s room. It also took place on a afternoon at a lake with swans where Sara took Charlie to explore. There were six swans that seemed motionless on the water. Their necks were all arched at the same angle, so it seemed there was only one swan mirrored five times. One clear blue night, Charlie left the house to see the swans again, but he got lost in the woods. There weeds and bushes everywhere that made cuts in his arms. The woods also included many ravines, high walls of masses of weeds, and many hills. It was very dark with scary noises and dark shadows made by the huge trees.

Charlie is the most important character in the story. He is ten years old. He has an identification bracelet with his name and address on one wrist. Charlie is mentally handicapped. Since he was three years old, he hasn’t spoken a word. He likes to listen to the ticking of his watch. It never fails to soothe him. When Charlie got lost, he was wearing blue pajamas and brown slippers.

Sara is my favorite character. She is fourteen years old. She has big feet with orange sneakers. Sara is tall and skinny. She has a crooked nose. Sara is a stubborn young girl. She has very low self-esteem. Sara worries about how she looks. She thinks she is not anything. Sara is jealous of her sister. She misunderstands her father's coldness for a lack of love. Sara misjudges the motives of everyone around her. At first she disliked her brother, Charlie, but after the incident she realized she loved him.

Aunt Willie is in her early forties. She has bad legs. She always wears her apron and works in the kitchen. Aunt Willie has been the three siblings’ guardian since their mother died six years ago. Sara doesn't like her very much, but she appears to be a real sport. For example, taking care of the children. However, Aunt Willie is a bit too over-protective. She is the character I detest the most.

Synopsis Summer of the Swans is a book about three siblings, nineteen year old Wanda, fourteen year old Sara, and ten year old Charlie who lived in West Virginia. They were put under the care of their Aunt Willie because their mother died six years ago and their father worked a long way from them. Sara thought Wanda was prettier and better formed than she. Sara was a girl who thought she wasn’t attractive. She was jealous of her sister because she got all the boys. On the other hand, Sara’s brother, Charlie, was mentally handicapped. When he was three, he had very high fevers that almost took his life away and damaged his brain. Since then he hasn't spoken a word. Sara wanted to go see the swans and Aunt Willie told her to take Charlie and some bread to feed the swans with her. Sara and Charlie fed the swans and then watched them for a while. When Charlie knew it was time to go, he refused. Sara had to drag him home. That night, Charlie wanted to see the swans again, so he ran out of the house, across the yard and headed down the road. He lost his way and started to head up the hill into the woods. The dark shadows and scary noises frightened Charlie. He started running again. When Charlie was running, he lost one of his bedroom slippers. Charlie ran into everything until he arrived at a ravine and somehow got stuck. In the morning, Wanda, Sara and Aunt Willie found Charlie was missing. Aunt Willie called the cops. During the time to find her brother, Sara grew up. She learned to take life around her more seriously. She realized that life was not always easy to figure out. The cops set up a search to find Charlie. Sara and her best friend, Mary, went up behind the lake and walked behind the houses toward the woods. Joe came along to help. Sara found Charlie's lost bedroom slipper. That was a sign that Charlie passed by. Sara could hear Charlie crying in the distance and ran toward the ravine. She found Charlie at last. Sara realized that she did love her brother. She used to think that he was a pain in the neck. But when he

Opinions When I first borrowed this book from the library, I thought it was going to be as exciting as Silverwing, the Harry Potter series and A Series of Unfortunate Events. After reading it, I had mixed feelings about this book. On one hand, it taught me a valuable lesson for later on in life. That is to open our eyes to the lives of others and realize that everyone has problems, some of which are worse than others, and that things usually work out. Nevertheless, even when they do not work out, we have to pick ourselves up and move on because we only get one go around in this ride we call life. The book also let me feel some things that are not happening to me, but to Sara. For example, having a mentally handicapped brother. On the other hand, it was one of the most boring books I have ever read. I don’t even think it deserved a Newberry Medal because there were hardly any descriptions of the characters and the whole novel seemed to be hanging. There was no beginning and ending to me, just a middle. In fact, I couldn’t even see where the problems came from. I would have liked the book to start when the mother was alive and then move into how the book started now. I would give this book three stars because it wasn’t a very good book, but taught me a valuable lesson. I would recommend this book for readers from age 8 -12 because this book’s reading level is 4. 6.

Miscellaneous The other books written by Betsy Byars: 1. After the Goat Man 2. The 18 th Emergency 3. The Glory Girl 4. The House of Wings 5. The Midnight Fox 6. Tornado 7. Trouble River 8. The Moon and I 9. Herculeah Jones Mystery books 10. A Blossom Promise 11. The Pinballs The titles of other books similar to Summer of the Swans: 1. James and the Giant Peach – By Roald Dahl 2. A Series of Unfortunate Events – By Lemony Snicket 3. Harry Potter – By J. K. Rowling 4. Maniac Magee – By Jerry Spinelli 5. Tuck Everlasting – By Natalie Babbit 6. Island of the Blue Dolphins – By Scott O’Dell 7. Dear Mr. Henshaw – Beverly Cleary 8. Charlotte’s Web – By E. B. White

About the Author Betsy Byars was born in Charlotte, North Carolina and lived there until her graduation from Queens College. The mother of four, Mrs. Byars began writing books for children as her own family was growing up. Mrs. Byars now lives in South Carolina, where her husband is associated with Clemson University. She and her husband have travelled widely throughout the United States in pursuit of their interest in gliding and antique airplanes.

Scenes From The Book

Thank You For Listening!

Where are YOU going this SUMMER? Summer University