The Stuart Dynasty The plan 1 James I 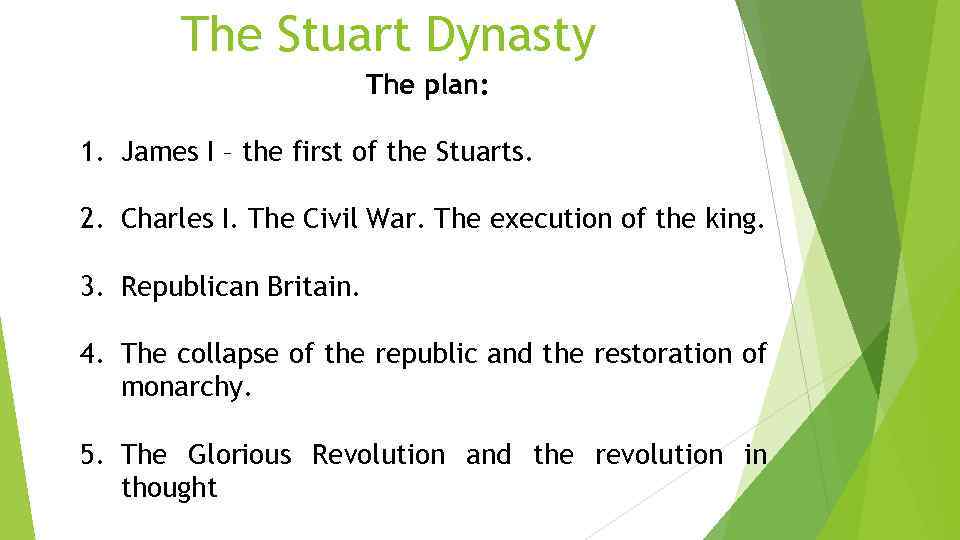 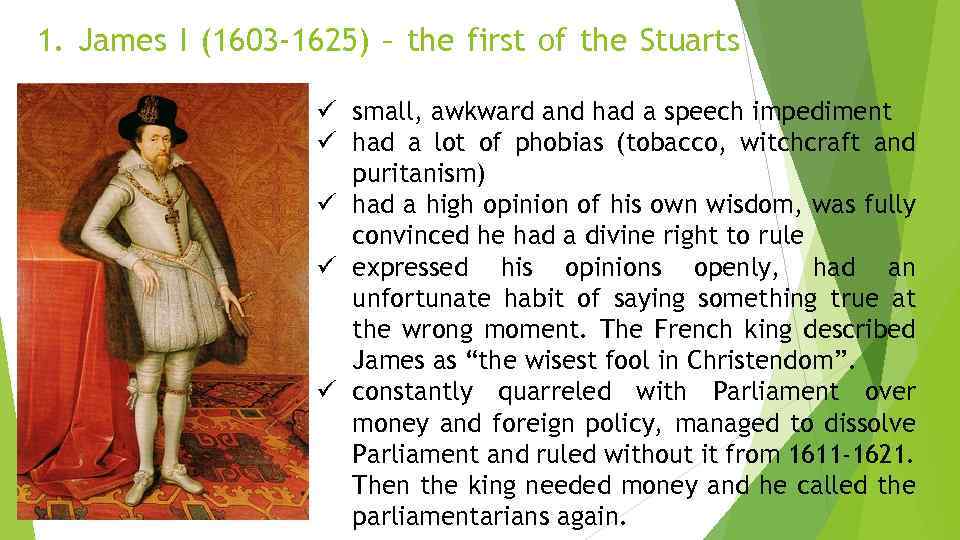 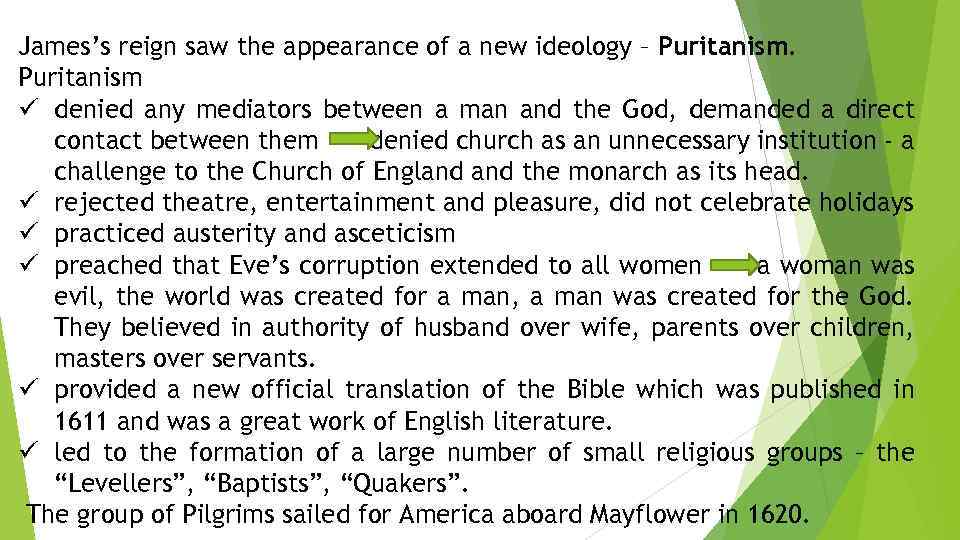 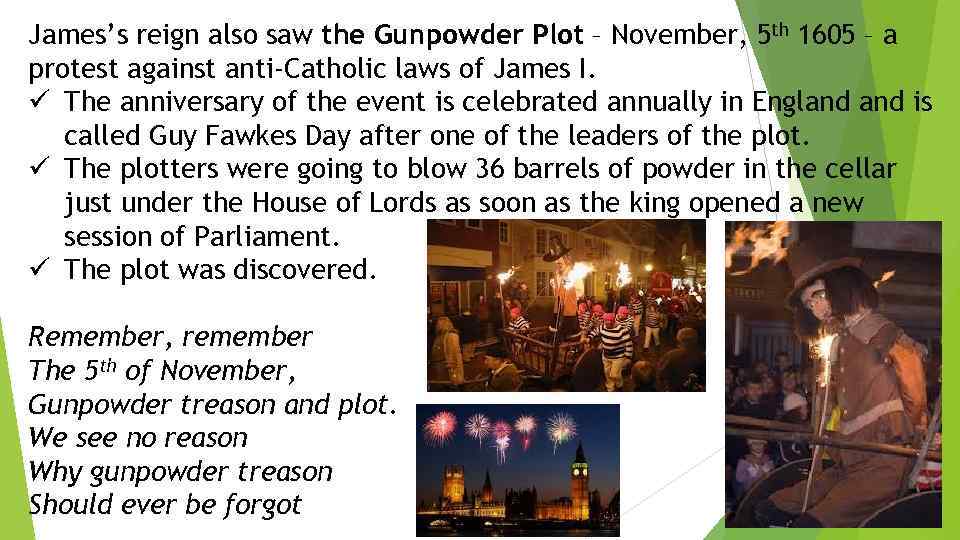 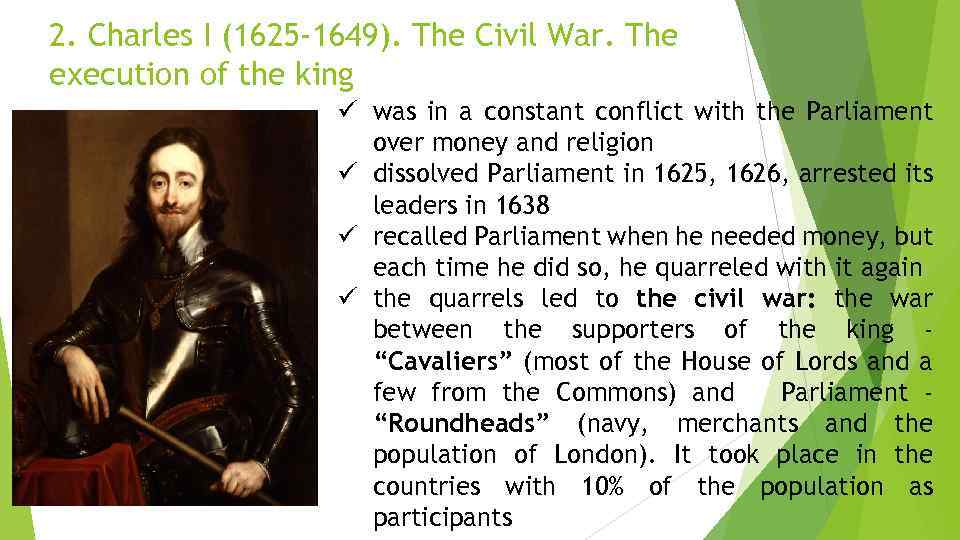 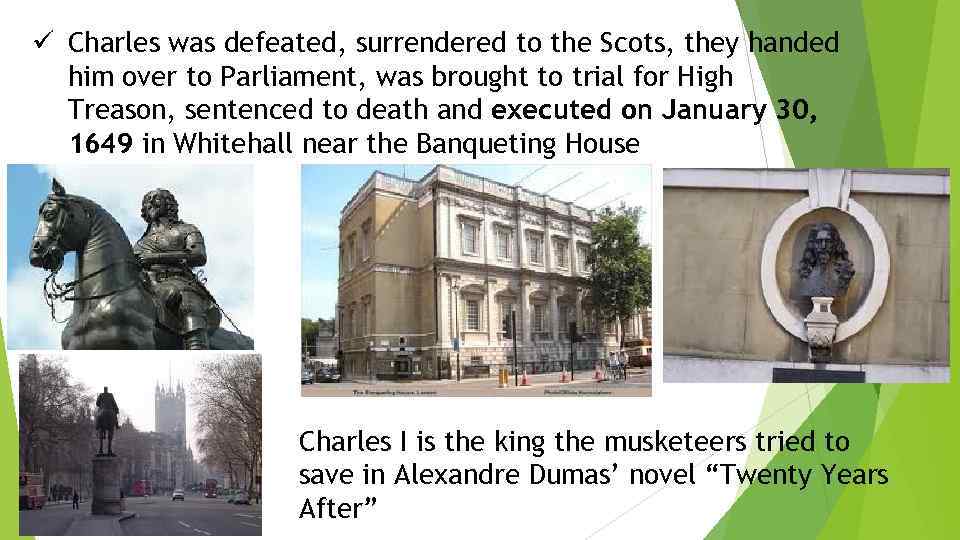 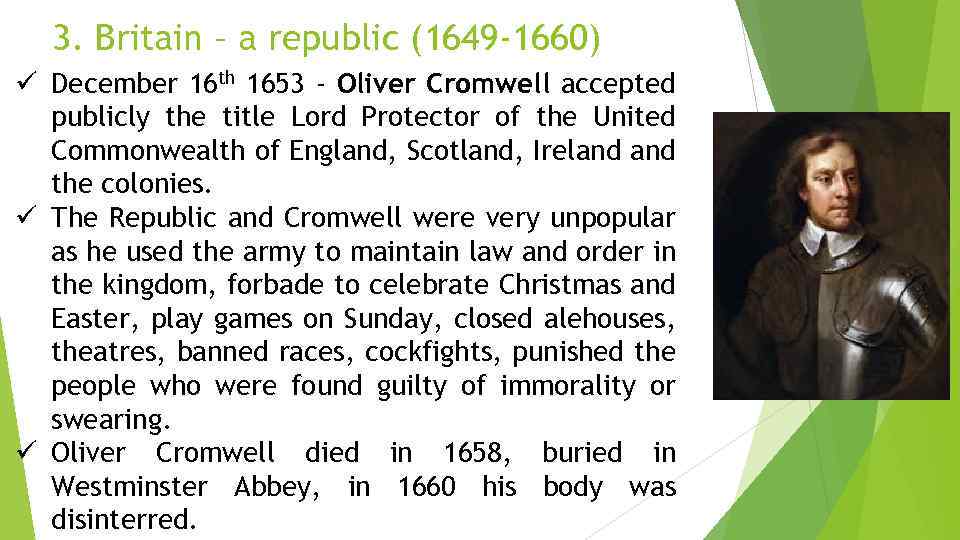 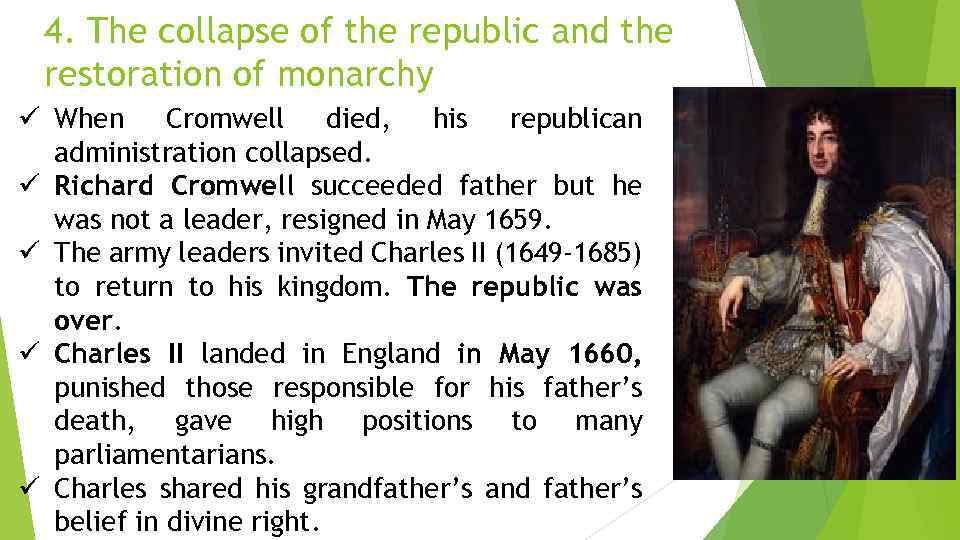 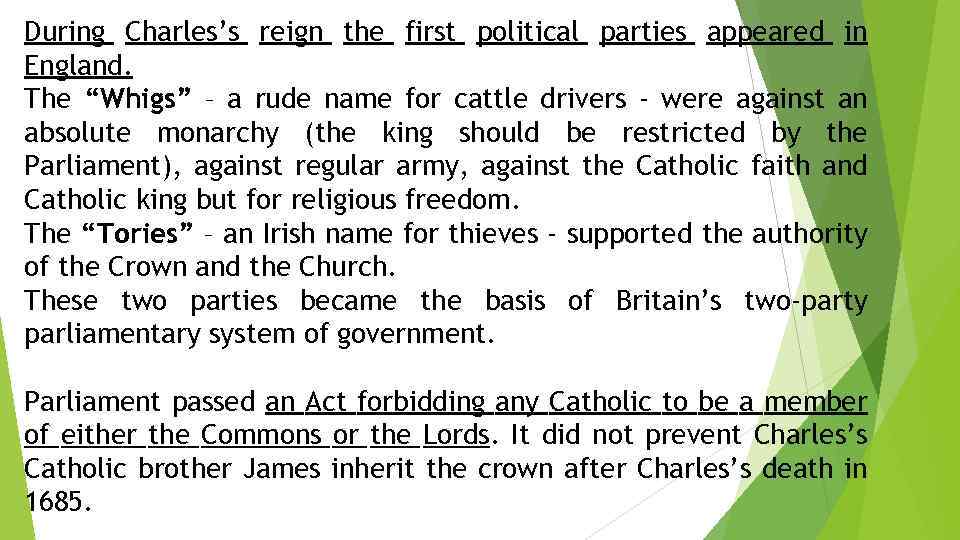 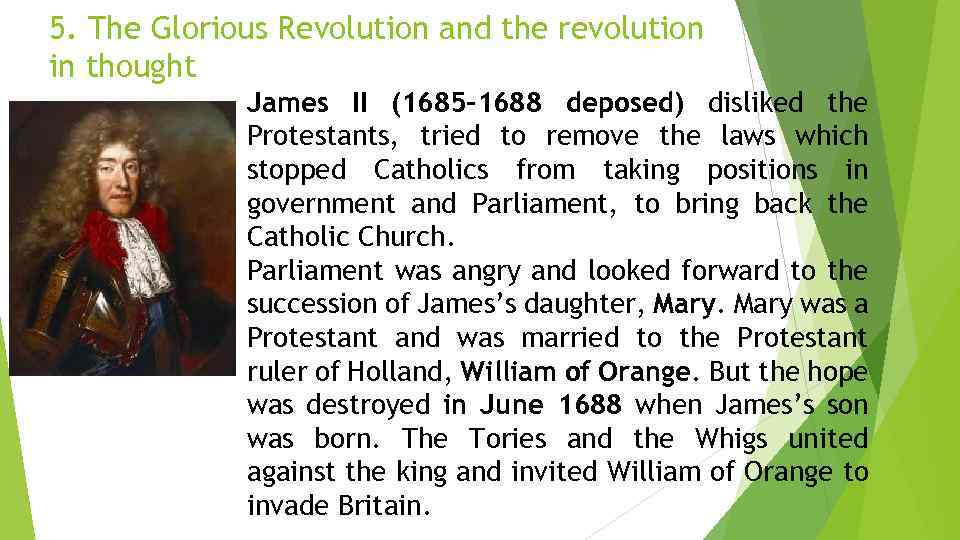 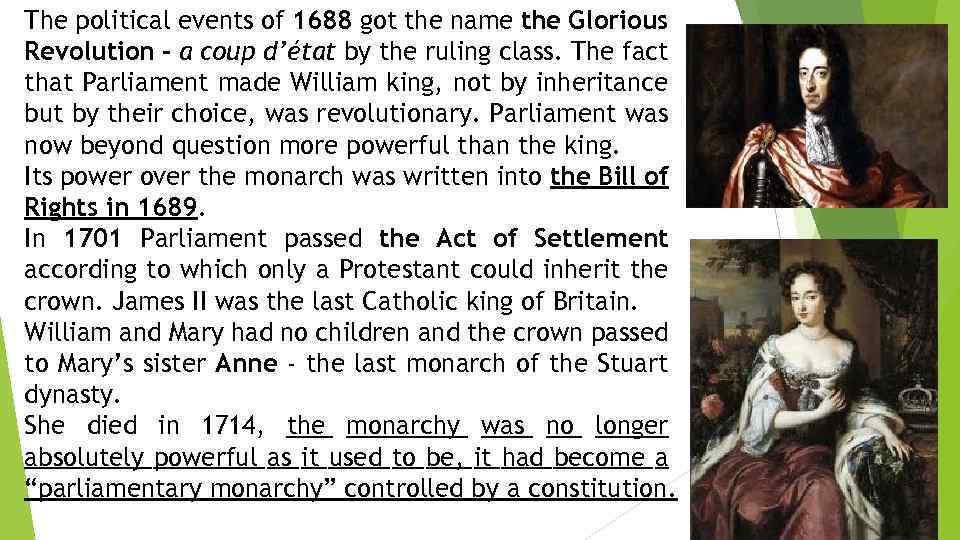 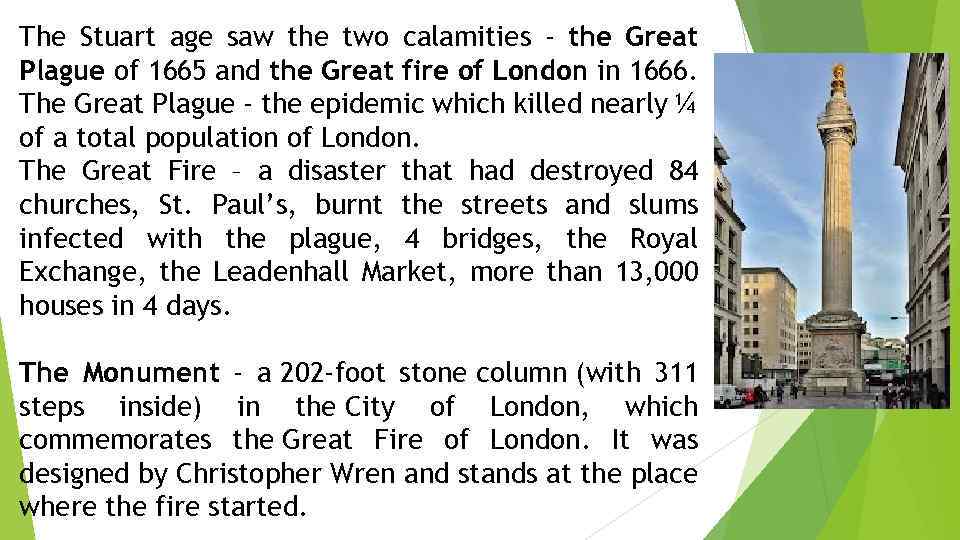 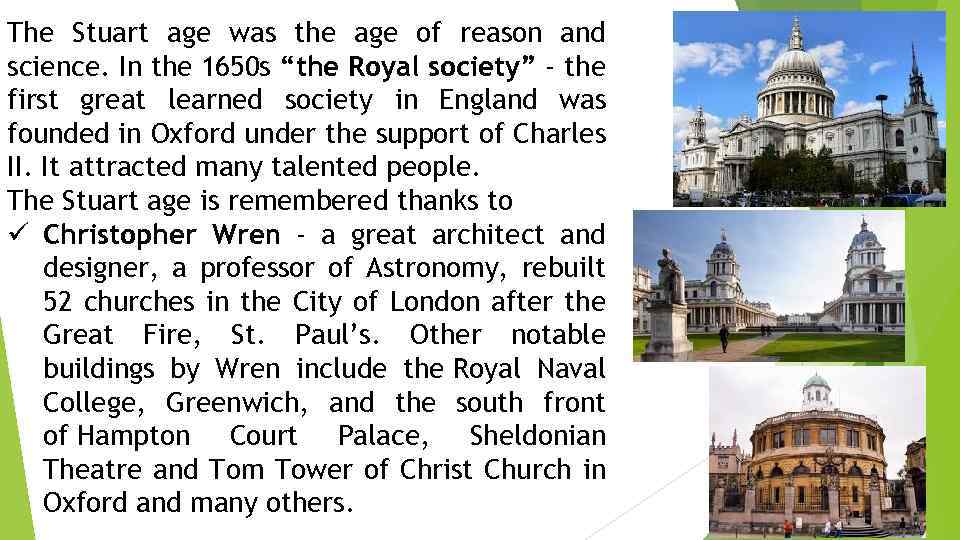 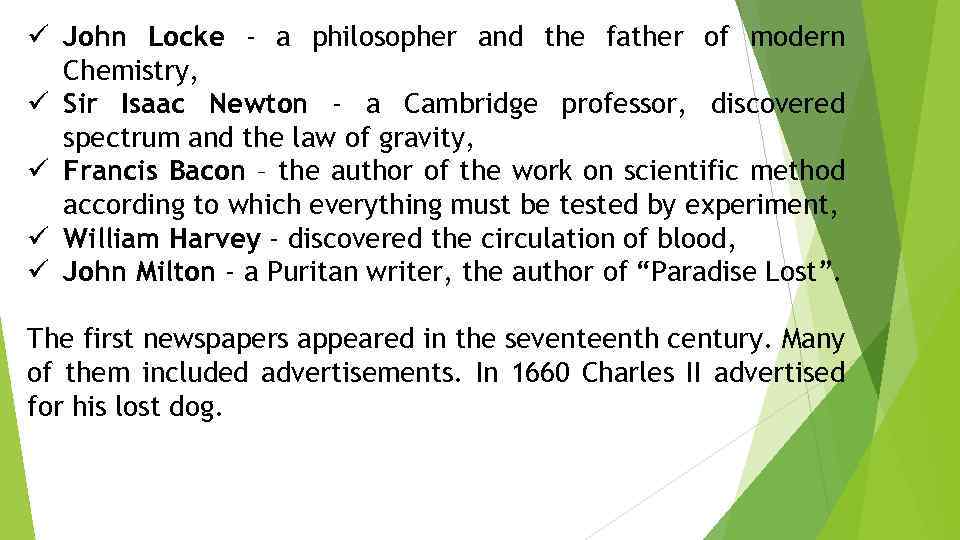 Скачать презентацию The Stuart Dynasty The plan 1 James I

The Stuart Dynasty The plan: 1. James I – the first of the Stuarts. 2. Charles I. The Civil War. The execution of the king. 3. Republican Britain. 4. The collapse of the republic and the restoration of monarchy. 5. The Glorious Revolution and the revolution in thought

1. James I (1603 -1625) – the first of the Stuarts ü small, awkward and had a speech impediment ü had a lot of phobias (tobacco, witchcraft and puritanism) ü had a high opinion of his own wisdom, was fully convinced he had a divine right to rule ü expressed his opinions openly, had an unfortunate habit of saying something true at the wrong moment. The French king described James as “the wisest fool in Christendom”. ü constantly quarreled with Parliament over money and foreign policy, managed to dissolve Parliament and ruled without it from 1611 -1621. Then the king needed money and he called the parliamentarians again.

James’s reign saw the appearance of a new ideology – Puritanism ü denied any mediators between a man and the God, demanded a direct contact between them denied church as an unnecessary institution - a challenge to the Church of England the monarch as its head. ü rejected theatre, entertainment and pleasure, did not celebrate holidays ü practiced austerity and asceticism ü preached that Eve’s corruption extended to all women a woman was evil, the world was created for a man, a man was created for the God. They believed in authority of husband over wife, parents over children, masters over servants. ü provided a new official translation of the Bible which was published in 1611 and was a great work of English literature. ü led to the formation of a large number of small religious groups – the “Levellers”, “Baptists”, “Quakers”. The group of Pilgrims sailed for America aboard Mayflower in 1620.

James’s reign also saw the Gunpowder Plot – November, 5 th 1605 – a protest against anti-Catholic laws of James I. ü The anniversary of the event is celebrated annually in England is called Guy Fawkes Day after one of the leaders of the plot. ü The plotters were going to blow 36 barrels of powder in the cellar just under the House of Lords as soon as the king opened a new session of Parliament. ü The plot was discovered. Remember, remember The 5 th of November, Gunpowder treason and plot. We see no reason Why gunpowder treason Should ever be forgot

2. Charles I (1625 -1649). The Civil War. The execution of the king ü was in a constant conflict with the Parliament over money and religion ü dissolved Parliament in 1625, 1626, arrested its leaders in 1638 ü recalled Parliament when he needed money, but each time he did so, he quarreled with it again ü the quarrels led to the civil war: the war between the supporters of the king “Cavaliers” (most of the House of Lords and a few from the Commons) and Parliament “Roundheads” (navy, merchants and the population of London). It took place in the countries with 10% of the population as participants

ü Charles was defeated, surrendered to the Scots, they handed him over to Parliament, was brought to trial for High Treason, sentenced to death and executed on January 30, 1649 in Whitehall near the Banqueting House Charles I is the king the musketeers tried to save in Alexandre Dumas’ novel “Twenty Years After”

3. Britain – a republic (1649 -1660) ü December 16 th 1653 - Oliver Cromwell accepted publicly the title Lord Protector of the United Commonwealth of England, Scotland, Ireland the colonies. ü The Republic and Cromwell were very unpopular as he used the army to maintain law and order in the kingdom, forbade to celebrate Christmas and Easter, play games on Sunday, closed alehouses, theatres, banned races, cockfights, punished the people who were found guilty of immorality or swearing. ü Oliver Cromwell died in 1658, buried in Westminster Abbey, in 1660 his body was disinterred.

4. The collapse of the republic and the restoration of monarchy ü When Cromwell died, his republican administration collapsed. ü Richard Cromwell succeeded father but he was not a leader, resigned in May 1659. ü The army leaders invited Charles II (1649 -1685) to return to his kingdom. The republic was over. ü Charles II landed in England in May 1660, punished those responsible for his father’s death, gave high positions to many parliamentarians. ü Charles shared his grandfather’s and father’s belief in divine right.

During Charles’s reign the first political parties appeared in England. The “Whigs” – a rude name for cattle drivers - were against an absolute monarchy (the king should be restricted by the Parliament), against regular army, against the Catholic faith and Catholic king but for religious freedom. The “Tories” – an Irish name for thieves - supported the authority of the Crown and the Church. These two parties became the basis of Britain’s two-party parliamentary system of government. Parliament passed an Act forbidding any Catholic to be a member of either the Commons or the Lords. It did not prevent Charles’s Catholic brother James inherit the crown after Charles’s death in 1685.

5. The Glorious Revolution and the revolution in thought James II (1685 -1688 deposed) disliked the Protestants, tried to remove the laws which stopped Catholics from taking positions in government and Parliament, to bring back the Catholic Church. Parliament was angry and looked forward to the succession of James’s daughter, Mary was a Protestant and was married to the Protestant ruler of Holland, William of Orange. But the hope was destroyed in June 1688 when James’s son was born. The Tories and the Whigs united against the king and invited William of Orange to invade Britain.

The political events of 1688 got the name the Glorious Revolution - a coup d’état by the ruling class. The fact that Parliament made William king, not by inheritance but by their choice, was revolutionary. Parliament was now beyond question more powerful than the king. Its power over the monarch was written into the Bill of Rights in 1689. In 1701 Parliament passed the Act of Settlement according to which only a Protestant could inherit the crown. James II was the last Catholic king of Britain. William and Mary had no children and the crown passed to Mary’s sister Anne - the last monarch of the Stuart dynasty. She died in 1714, the monarchy was no longer absolutely powerful as it used to be, it had become a “parliamentary monarchy” controlled by a constitution.

The Stuart age saw the two calamities - the Great Plague of 1665 and the Great fire of London in 1666. The Great Plague - the epidemic which killed nearly ¼ of a total population of London. The Great Fire – a disaster that had destroyed 84 churches, St. Paul’s, burnt the streets and slums infected with the plague, 4 bridges, the Royal Exchange, the Leadenhall Market, more than 13, 000 houses in 4 days. The Monument - a 202 -foot stone column (with 311 steps inside) in the City of London, which commemorates the Great Fire of London. It was designed by Christopher Wren and stands at the place where the fire started.

The Stuart age was the age of reason and science. In the 1650 s “the Royal society” - the first great learned society in England was founded in Oxford under the support of Charles II. It attracted many talented people. The Stuart age is remembered thanks to ü Christopher Wren - a great architect and designer, a professor of Astronomy, rebuilt 52 churches in the City of London after the Great Fire, St. Paul’s. Other notable buildings by Wren include the Royal Naval College, Greenwich, and the south front of Hampton Court Palace, Sheldonian Theatre and Tom Tower of Christ Church in Oxford and many others.

ü John Locke - a philosopher and the father of modern Chemistry, ü Sir Isaac Newton - a Cambridge professor, discovered spectrum and the law of gravity, ü Francis Bacon – the author of the work on scientific method according to which everything must be tested by experiment, ü William Harvey - discovered the circulation of blood, ü John Milton - a Puritan writer, the author of “Paradise Lost”. The first newspapers appeared in the seventeenth century. Many of them included advertisements. In 1660 Charles II advertised for his lost dog.