The Strength to Go On By Tara Dusanj 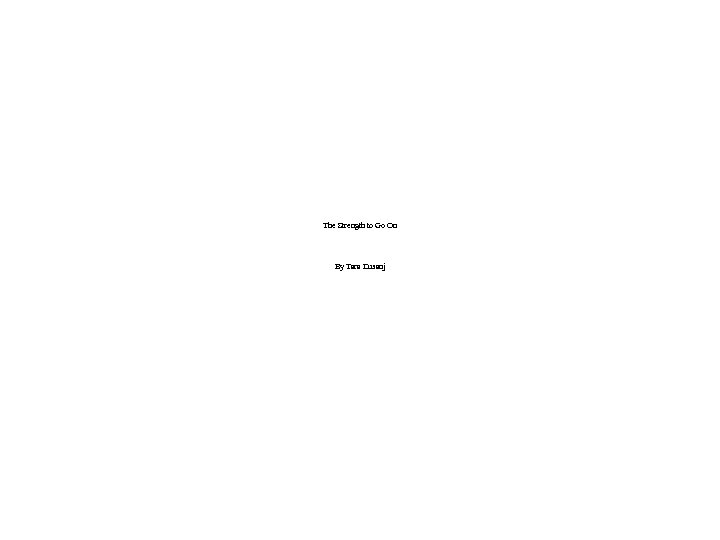 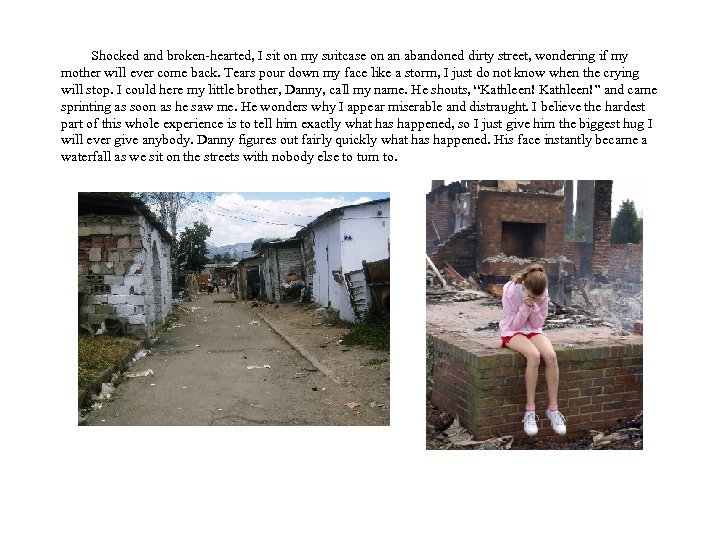 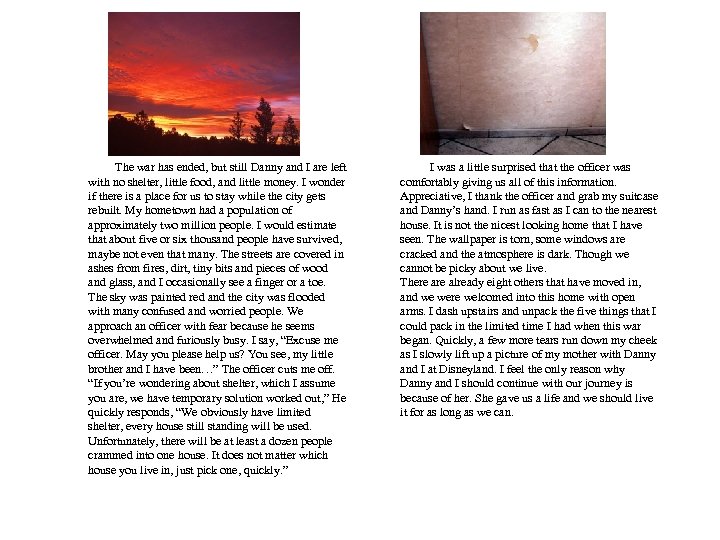 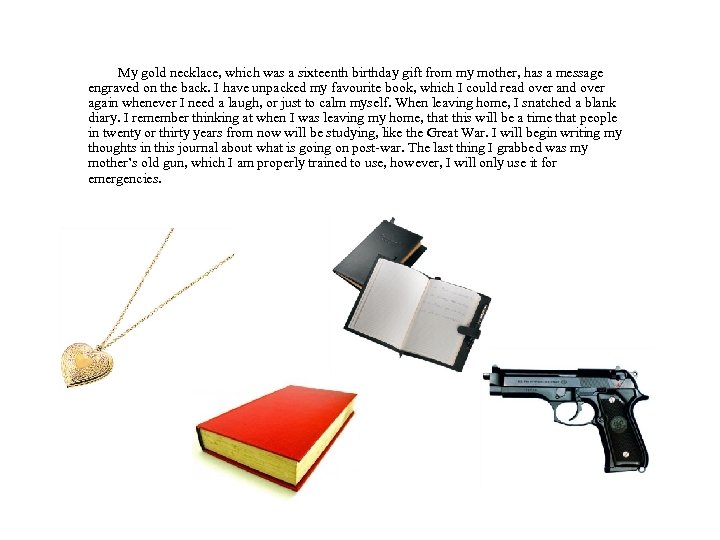 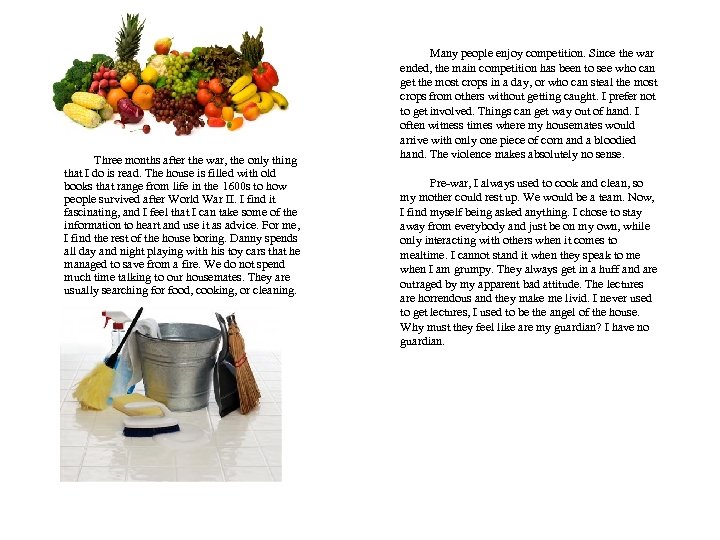 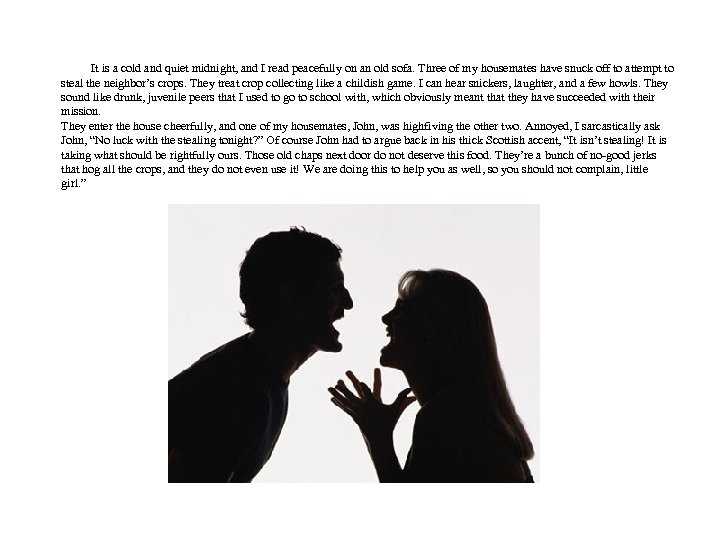 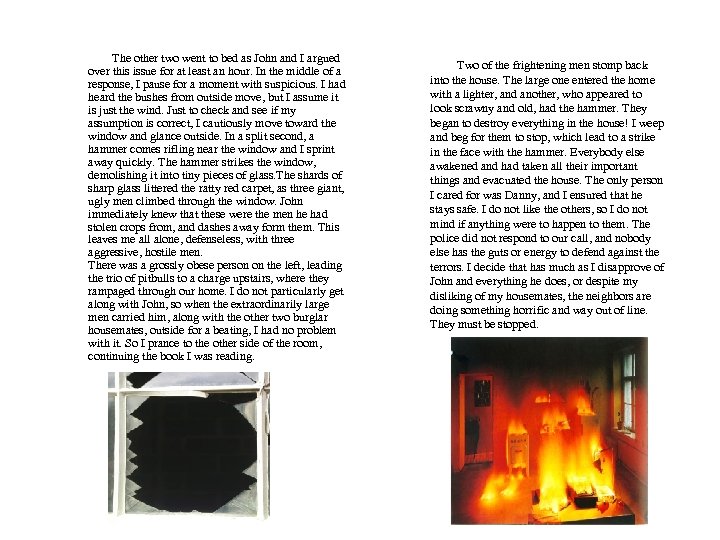 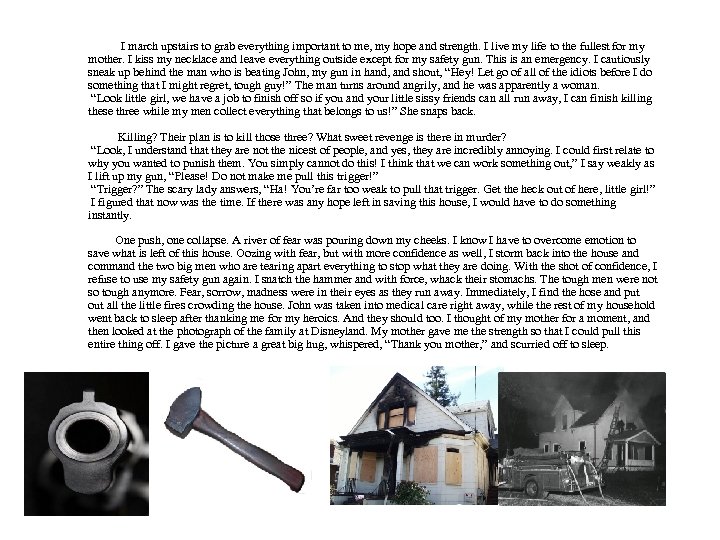 Скачать презентацию The Strength to Go On By Tara Dusanj

The Strength to Go On By Tara Dusanj

Shocked and broken-hearted, I sit on my suitcase on an abandoned dirty street, wondering if my mother will ever come back. Tears pour down my face like a storm, I just do not know when the crying will stop. I could here my little brother, Danny, call my name. He shouts, “Kathleen!” and came sprinting as soon as he saw me. He wonders why I appear miserable and distraught. I believe the hardest part of this whole experience is to tell him exactly what has happened, so I just give him the biggest hug I will ever give anybody. Danny figures out fairly quickly what has happened. His face instantly became a waterfall as we sit on the streets with nobody else to turn to.

The war has ended, but still Danny and I are left with no shelter, little food, and little money. I wonder if there is a place for us to stay while the city gets rebuilt. My hometown had a population of approximately two million people. I would estimate that about five or six thousand people have survived, maybe not even that many. The streets are covered in ashes from fires, dirt, tiny bits and pieces of wood and glass, and I occasionally see a finger or a toe. The sky was painted red and the city was flooded with many confused and worried people. We approach an officer with fear because he seems overwhelmed and furiously busy. I say, “Excuse me officer. May you please help us? You see, my little brother and I have been…” The officer cuts me off. “If you’re wondering about shelter, which I assume you are, we have temporary solution worked out, ” He quickly responds, “We obviously have limited shelter, every house still standing will be used. Unfortunately, there will be at least a dozen people crammed into one house. It does not matter which house you live in, just pick one, quickly. ” I was a little surprised that the officer was comfortably giving us all of this information. Appreciative, I thank the officer and grab my suitcase and Danny’s hand. I run as fast as I can to the nearest house. It is not the nicest looking home that I have seen. The wallpaper is torn, some windows are cracked and the atmosphere is dark. Though we cannot be picky about we live. There already eight others that have moved in, and we were welcomed into this home with open arms. I dash upstairs and unpack the five things that I could pack in the limited time I had when this war began. Quickly, a few more tears run down my cheek as I slowly lift up a picture of my mother with Danny and I at Disneyland. I feel the only reason why Danny and I should continue with our journey is because of her. She gave us a life and we should live it for as long as we can.

My gold necklace, which was a sixteenth birthday gift from my mother, has a message engraved on the back. I have unpacked my favourite book, which I could read over and over again whenever I need a laugh, or just to calm myself. When leaving home, I snatched a blank diary. I remember thinking at when I was leaving my home, that this will be a time that people in twenty or thirty years from now will be studying, like the Great War. I will begin writing my thoughts in this journal about what is going on post-war. The last thing I grabbed was my mother’s old gun, which I am properly trained to use, however, I will only use it for emergencies.

Three months after the war, the only thing that I do is read. The house is filled with old books that range from life in the 1600 s to how people survived after World War II. I find it fascinating, and I feel that I can take some of the information to heart and use it as advice. For me, I find the rest of the house boring. Danny spends all day and night playing with his toy cars that he managed to save from a fire. We do not spend much time talking to our housemates. They are usually searching for food, cooking, or cleaning. Many people enjoy competition. Since the war ended, the main competition has been to see who can get the most crops in a day, or who can steal the most crops from others without getting caught. I prefer not to get involved. Things can get way out of hand. I often witness times where my housemates would arrive with only one piece of corn and a bloodied hand. The violence makes absolutely no sense. Pre-war, I always used to cook and clean, so my mother could rest up. We would be a team. Now, I find myself being asked anything. I chose to stay away from everybody and just be on my own, while only interacting with others when it comes to mealtime. I cannot stand it when they speak to me when I am grumpy. They always get in a huff and are outraged by my apparent bad attitude. The lectures are horrendous and they make me livid. I never used to get lectures, I used to be the angel of the house. Why must they feel like are my guardian? I have no guardian.

It is a cold and quiet midnight, and I read peacefully on an old sofa. Three of my housemates have snuck off to attempt to steal the neighbor’s crops. They treat crop collecting like a childish game. I can hear snickers, laughter, and a few howls. They sound like drunk, juvenile peers that I used to go to school with, which obviously meant that they have succeeded with their mission. They enter the house cheerfully, and one of my housemates, John, was highfiving the other two. Annoyed, I sarcastically ask John, “No luck with the stealing tonight? ” Of course John had to argue back in his thick Scottish accent, “It isn’t stealing! It is taking what should be rightfully ours. Those old chaps next door do not deserve this food. They’re a bunch of no-good jerks that hog all the crops, and they do not even use it! We are doing this to help you as well, so you should not complain, little girl. ”

The other two went to bed as John and I argued over this issue for at least an hour. In the middle of a response, I pause for a moment with suspicious. I had heard the bushes from outside move, but I assume it is just the wind. Just to check and see if my assumption is correct, I cautiously move toward the window and glance outside. In a split second, a hammer comes rifling near the window and I sprint away quickly. The hammer strikes the window, demolishing it into tiny pieces of glass. The shards of sharp glass littered the ratty red carpet, as three giant, ugly men climbed through the window. John immediately knew that these were the men he had stolen crops from, and dashes away form them. This leaves me all alone, defenseless, with three aggressive, hostile men. There was a grossly obese person on the left, leading the trio of pitbulls to a charge upstairs, where they rampaged through our home. I do not particularly get along with John, so when the extraordinarily large men carried him, along with the other two burglar housemates, outside for a beating, I had no problem with it. So I prance to the other side of the room, continuing the book I was reading. Two of the frightening men stomp back into the house. The large one entered the home with a lighter, and another, who appeared to look scrawny and old, had the hammer. They began to destroy everything in the house! I weep and beg for them to stop, which lead to a strike in the face with the hammer. Everybody else awakened and had taken all their important things and evacuated the house. The only person I cared for was Danny, and I ensured that he stays safe. I do not like the others, so I do not mind if anything were to happen to them. The police did not respond to our call, and nobody else has the guts or energy to defend against the terrors. I decide that has much as I disapprove of John and everything he does, or despite my disliking of my housemates, the neighbors are doing something horrific and way out of line. They must be stopped.

I march upstairs to grab everything important to me, my hope and strength. I live my life to the fullest for my mother. I kiss my necklace and leave everything outside except for my safety gun. This is an emergency. I cautiously sneak up behind the man who is beating John, my gun in hand, and shout, “Hey! Let go of all of the idiots before I do something that I might regret, tough guy!” The man turns around angrily, and he was apparently a woman. “Look little girl, we have a job to finish off so if you and your little sissy friends can all run away, I can finish killing these three while my men collect everything that belongs to us!” She snaps back. Killing? Their plan is to kill those three? What sweet revenge is there in murder? “Look, I understand that they are not the nicest of people, and yes, they are incredibly annoying. I could first relate to why you wanted to punish them. You simply cannot do this! I think that we can work something out, ” I say weakly as I lift up my gun, “Please! Do not make me pull this trigger!” “Trigger? ” The scary lady answers, “Ha! You’re far too weak to pull that trigger. Get the heck out of here, little girl!” I figured that now was the time. If there was any hope left in saving this house, I would have to do something instantly. One push, one collapse. A river of fear was pouring down my cheeks. I know I have to overcome emotion to save what is left of this house. Oozing with fear, but with more confidence as well, I storm back into the house and command the two big men who are tearing apart everything to stop what they are doing. With the shot of confidence, I refuse to use my safety gun again. I snatch the hammer and with force, whack their stomachs. The tough men were not so tough anymore. Fear, sorrow, madness were in their eyes as they run away. Immediately, I find the hose and put out all the little fires crowding the house. John was taken into medical care right away, while the rest of my household went back to sleep after thanking me for my heroics. And they should too. I thought of my mother for a moment, and then looked at the photograph of the family at Disneyland. My mother gave me the strength so that I could pull this entire thing off. I gave the picture a great big hug, whispered, “Thank you mother, ” and scurried off to sleep.