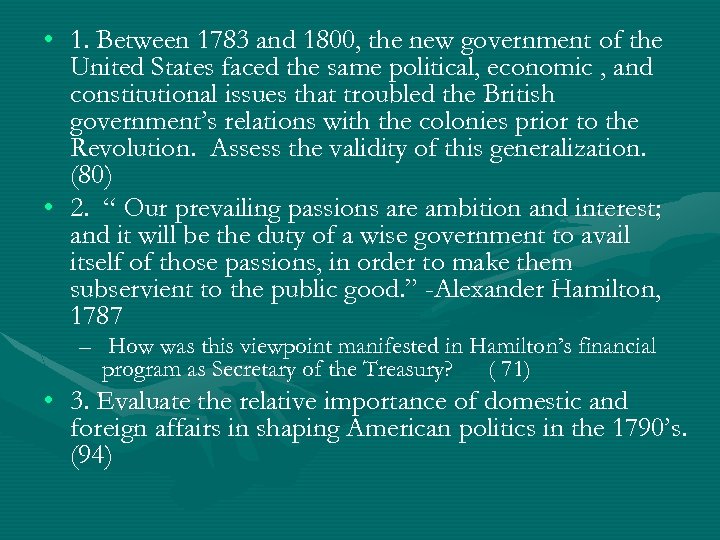 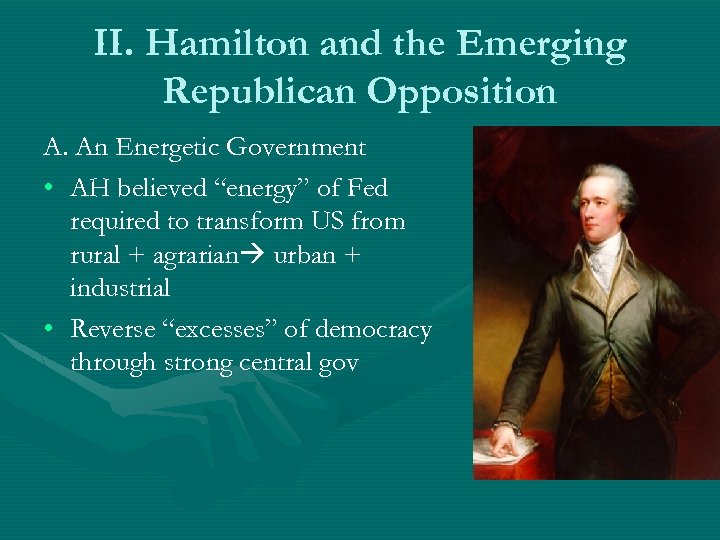 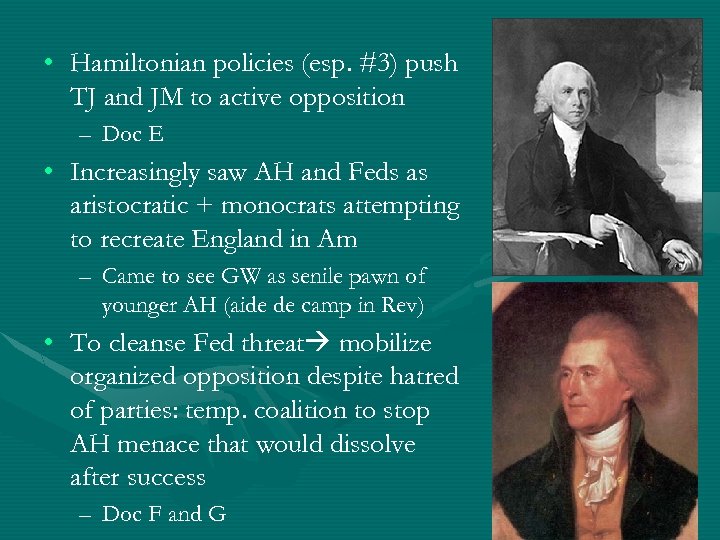 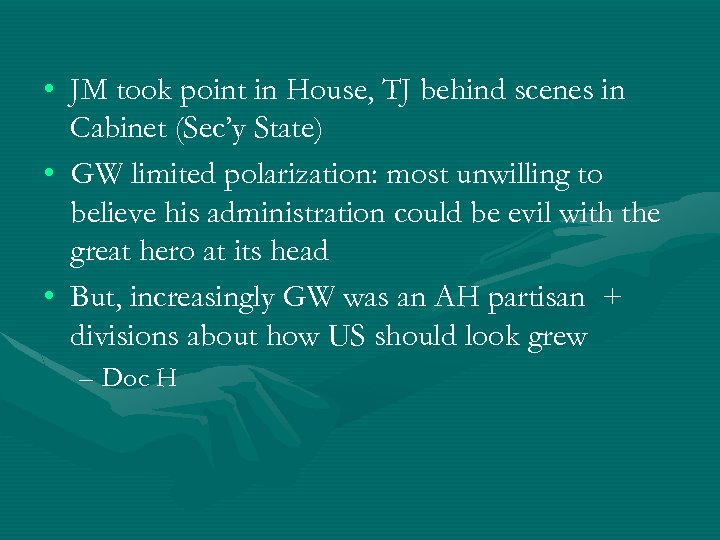 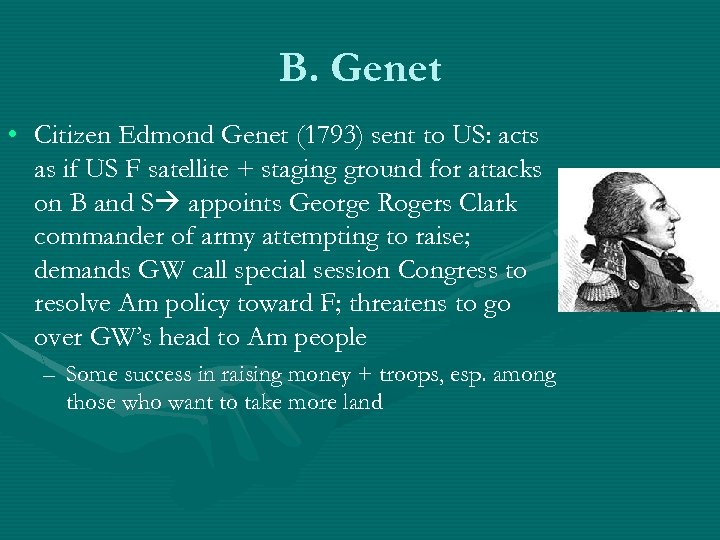 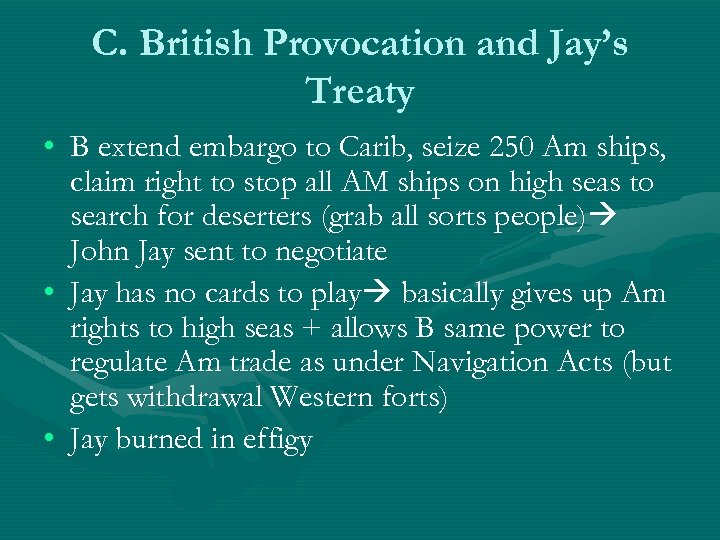 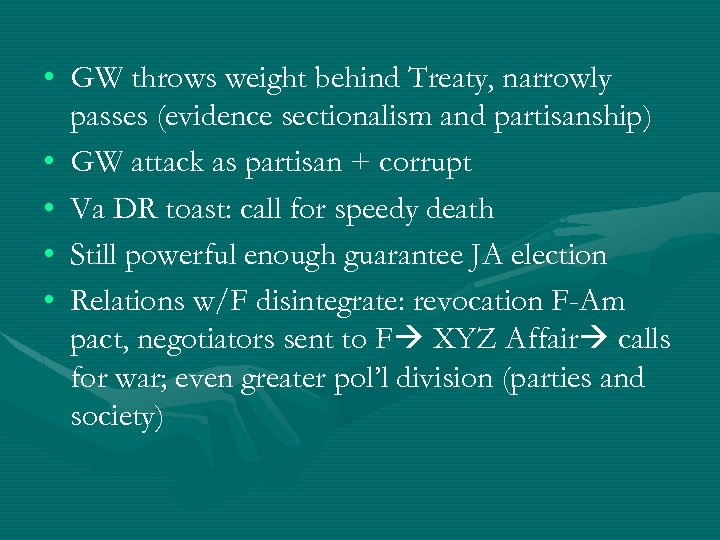 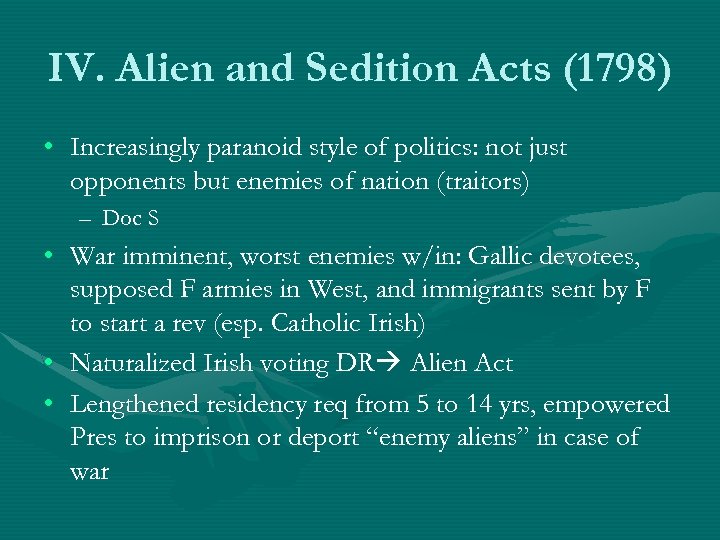 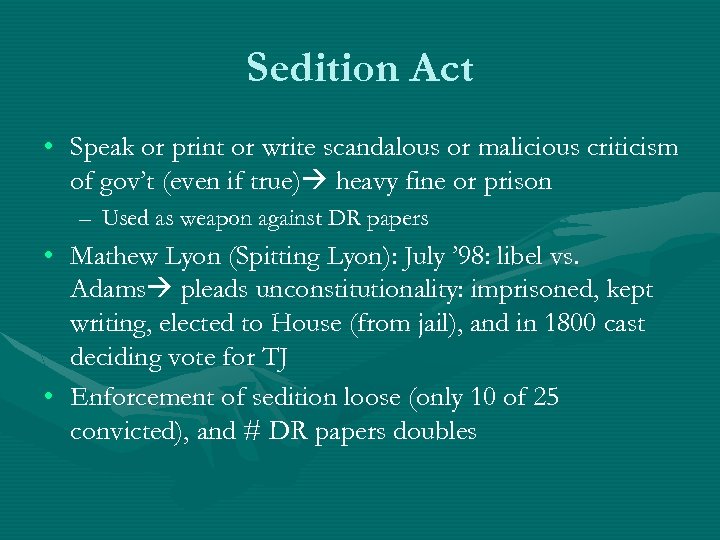 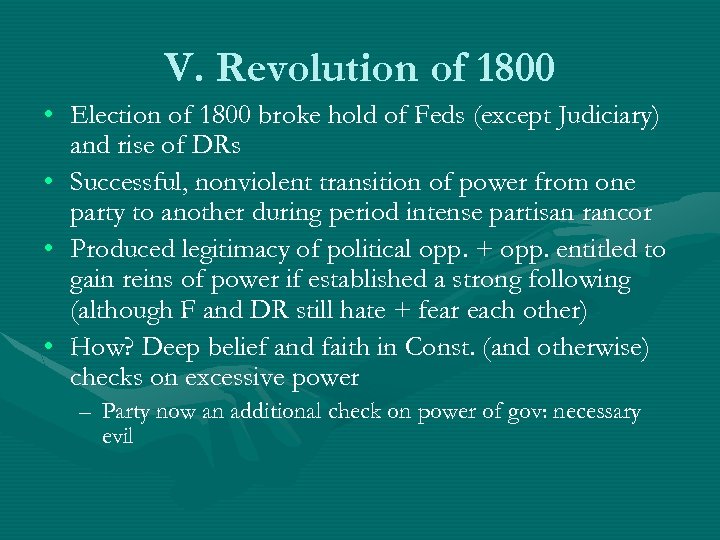 • 1. Between 1783 and 1800, the new government of the United States faced the same political, economic , and constitutional issues that troubled the British government’s relations with the colonies prior to the Revolution. Assess the validity of this generalization. (80) • 2. “ Our prevailing passions are ambition and interest; and it will be the duty of a wise government to avail itself of those passions, in order to make them subservient to the public good. ” -Alexander Hamilton, 1787 – How was this viewpoint manifested in Hamilton’s financial program as Secretary of the Treasury? ( 71) • 3. Evaluate the relative importance of domestic and foreign affairs in shaping American politics in the 1790’s. (94)

II. Hamilton and the Emerging Republican Opposition A. An Energetic Government • AH believed “energy” of Fed required to transform US from rural + agrarian urban + industrial • Reverse “excesses” of democracy through strong central gov

• JM took point in House, TJ behind scenes in Cabinet (Sec’y State) • GW limited polarization: most unwilling to believe his administration could be evil with the great hero at its head • But, increasingly GW was an AH partisan + divisions about how US should look grew – Doc H

B. Genet • Citizen Edmond Genet (1793) sent to US: acts as if US F satellite + staging ground for attacks on B and S appoints George Rogers Clark commander of army attempting to raise; demands GW call special session Congress to resolve Am policy toward F; threatens to go over GW’s head to Am people – Some success in raising money + troops, esp. among those who want to take more land

C. British Provocation and Jay’s Treaty • B extend embargo to Carib, seize 250 Am ships, claim right to stop all AM ships on high seas to search for deserters (grab all sorts people) John Jay sent to negotiate • Jay has no cards to play basically gives up Am rights to high seas + allows B same power to regulate Am trade as under Navigation Acts (but gets withdrawal Western forts) • Jay burned in effigy

Sedition Act • Speak or print or write scandalous or malicious criticism of gov’t (even if true) heavy fine or prison – Used as weapon against DR papers • Mathew Lyon (Spitting Lyon): July ’ 98: libel vs. Adams pleads unconstitutionality: imprisoned, kept writing, elected to House (from jail), and in 1800 cast deciding vote for TJ • Enforcement of sedition loose (only 10 of 25 convicted), and # DR papers doubles

V. Revolution of 1800 • Election of 1800 broke hold of Feds (except Judiciary) and rise of DRs • Successful, nonviolent transition of power from one party to another during period intense partisan rancor • Produced legitimacy of political opp. + opp. entitled to gain reins of power if established a strong following (although F and DR still hate + fear each other) • How? Deep belief and faith in Const. (and otherwise) checks on excessive power – Party now an additional check on power of gov: necessary evil